American Airlines Flagship First is AA’s version of Delta One.  It serves three transcontinental (ish) routes; MIA-JFK, SFO-JFK, and LAX-JFK.  Also in the key of threes, it offers three classes of domestic service — economy, business and first.  When you fly in first, you also are granted access to the American Airlines Flagship Lounge LAX (along with passengers flying in first internationally and with status).

This is the second post from my American Airlines status run.

Basically the American Airlines Flagship Lounge LAX is a more exclusive Admirals Club.  The feel is very similar, except with a few less people.  In fact, it is only separated from the Admirals Club by a (thin) wall. 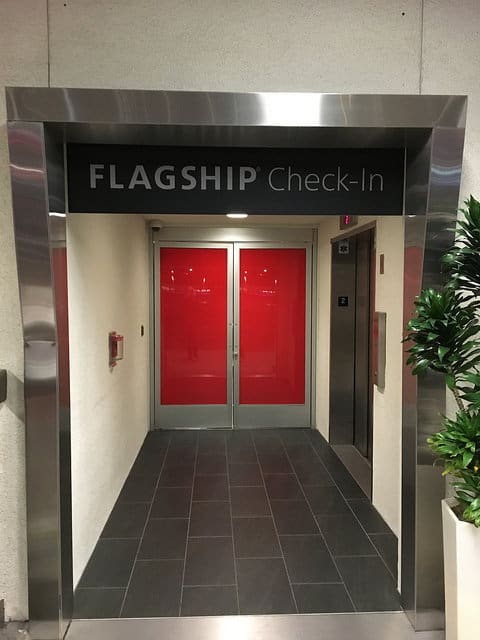 The American Airlines Flagship experience starts upon arrival at the airport.  When you pull up to Terminal 4, there is a separate Flagship entrance between Terminal 4 and 5.  A staff person was there to greet me (although I have to say she was less than friendly).  My flight from Denver arrived at the satellite terminal at LAX.  There is a bus that goes directly to the gates in Terminal 4, but I decided to take the shuttle to Terminal 6 so I could experience the Flagship check in. Once inside the bright red entrance, there were a couple of self check in kiosks and two standard check in desks.  I was the only passenger in the check in area.  A friendly gentleman checked me in.  He would have taken my luggage had I been traveling with any.  He printed out my boarding pass and reminded me that I had TSA PreCheck, which gate my flight was leaving out of, and that it was on time.  That was it — no reminder about Admirals Club/Flagship Lounge.  Oh well. 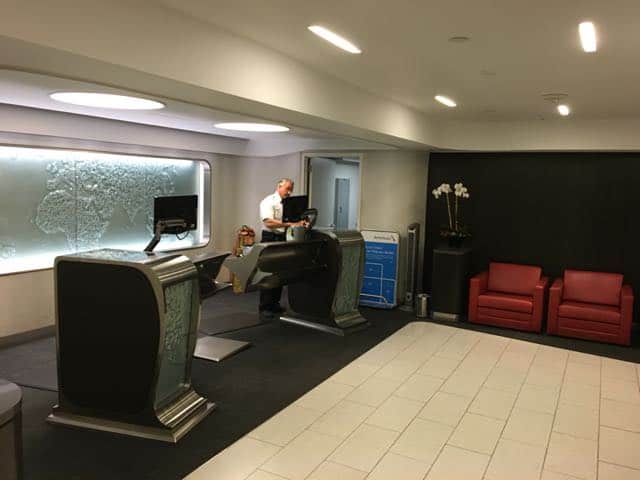 The all to un-eager greeter than lead me to the elevator that takes passengers to security.  “Do you need me to walk you to security?”  Um, no I think I’ll be fine.  I didn’t want to spend time alone with her in the elevator.  The elevator takes you to floor three and lets you out right at the PreCheck line. 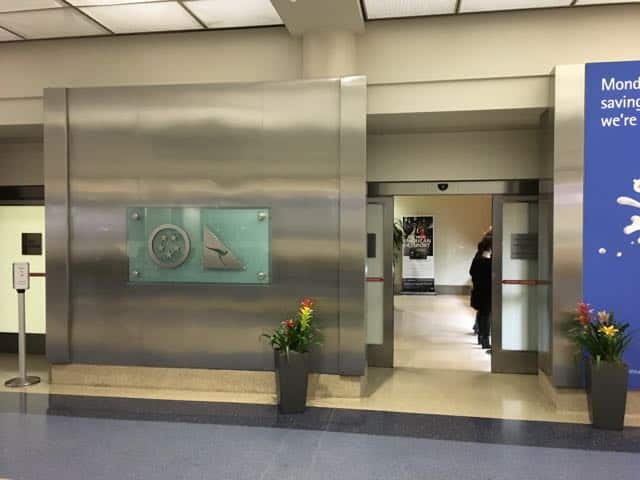 I followed the signs to the Admirals Club (just before gate 43).  The check in staff took my ticket and asked if I knew how to get to the Flagship Lounge.  I told her no.  She gave me a key card and and said something to the effect of “up the stairs behind you, take a right at the top.  Walk past the water fountain and take a left.”  I got to the top of the stairs and was perplexed; luckily there was a staff up there.  He took me to the Flagship entrance and instead of using my key card to open the door, (I kid you not) he squeezed himself between a gap in the wall and opened the door from the other side.  I guess that works! A friendly agent was staffing the desk.  I asked him about the showers and he gave me a key and asked if I need a toothbrush.  Well, yes, that would be great, thank you. The showers were at the far end of the Flagship Lounge.  There were 3 or 4 shower rooms that were very similar to the Admirals Club shower I used in Chicago.  High quality towels were folded in a whimsical way.  There was the standard Red Flower products.  Music was piped in which was a nice touch.  Very clean although there was a bad smell in the shower itself. 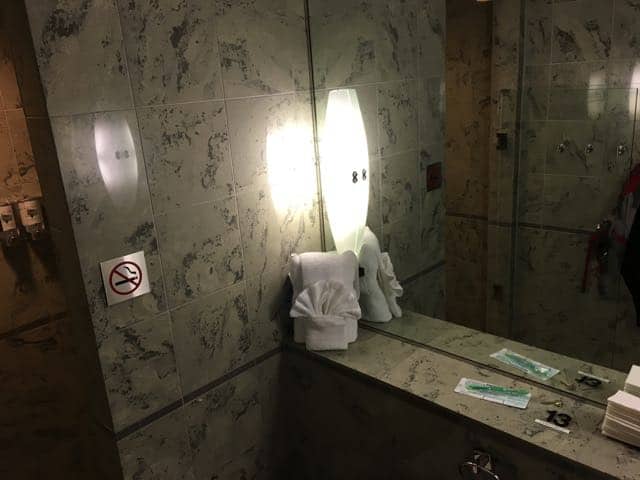 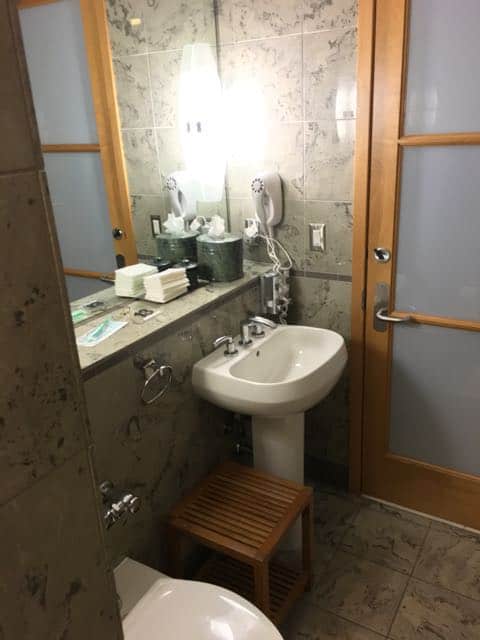 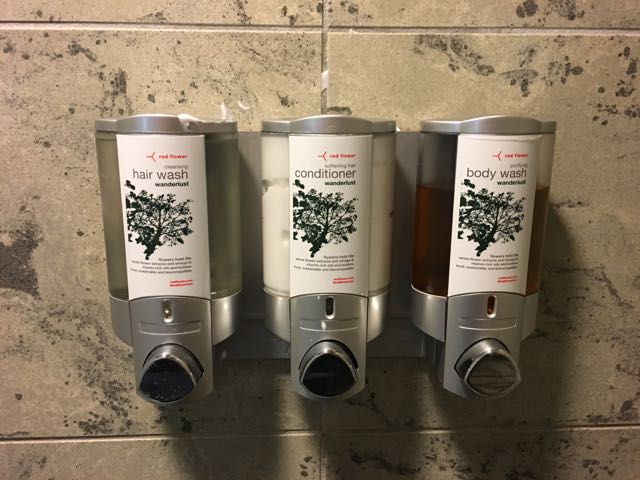 The men’s restroom (separate from the showers) was not in the best shape; tiles were literally falling off the wall.  There was also only one toilet (three urinals).  I guess they hope it doesn’t get busy! The main upgrades from the standard Admirals Club are the food and drink offering.  Neither of which are in the same league as the Centurion Lounge (neither was the shower when I think of it) which is more accessible and a step above in every way.  The food and drink were complimentary and unlimited (no chits here) but are also all self serve.  There was premium liquor and champagne.  Various options of beer and wine.  And entire wall of refrigerators filled with juice, bottled water (Evian!) and soda that the staff seemed to be continually refilling while I was there in the evening. The food was substantial and bland.  There were a number of hot options; chicken and fish, Brussels sprouts and cauliflower, and two grain type dishes.  I tried the chicken which was dry but eatable.  I was not very hungry after my meal on the last flight; maybe if I had been I would have found it more delicious.  There were also cold options; fruit, salad, cold cuts. 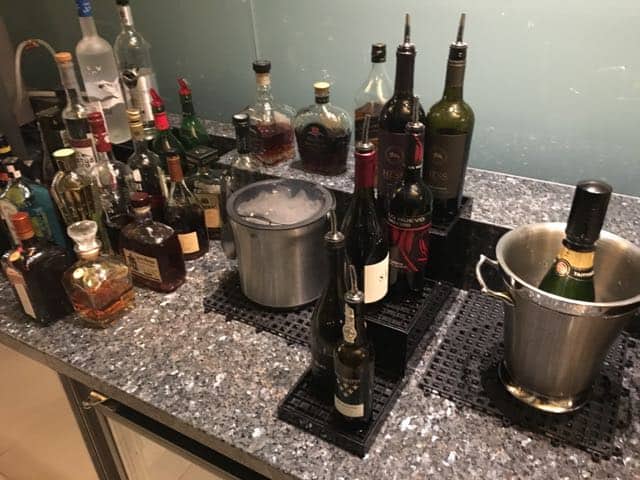 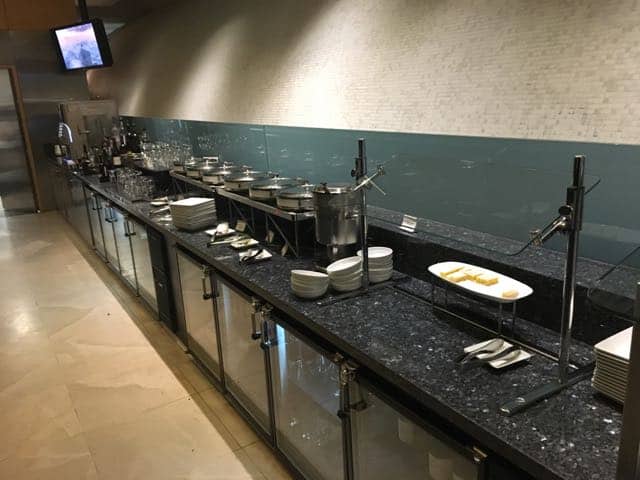 The only other thing of note was the Bose music stations at some of the seating.  You could listen to various radio stations which is a cool idea; but I didn’t see anyone using it.  There was also a large label across the stations that said “BOSE HEADSETS WILL ONLY OPERATE AT THE FLAGSHIP LOUNGE”.  American is paranoid about their Bose headsets on the ground and in the air. 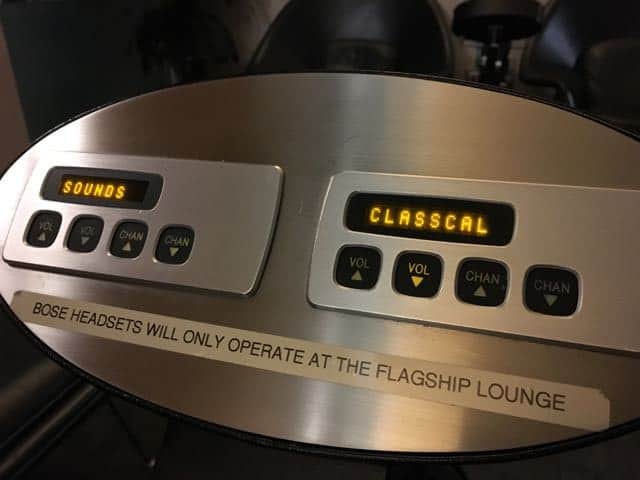 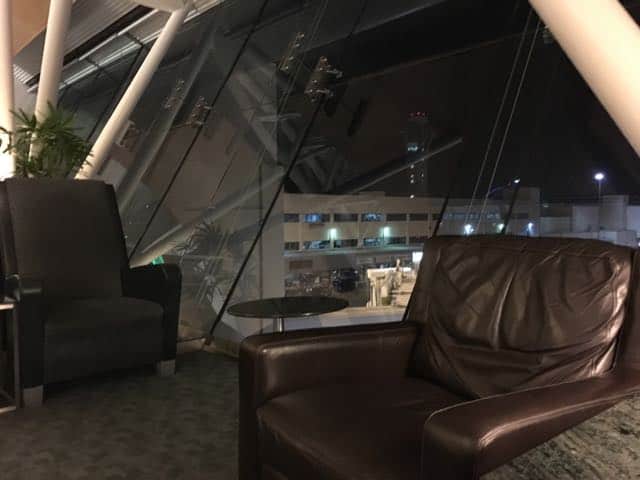 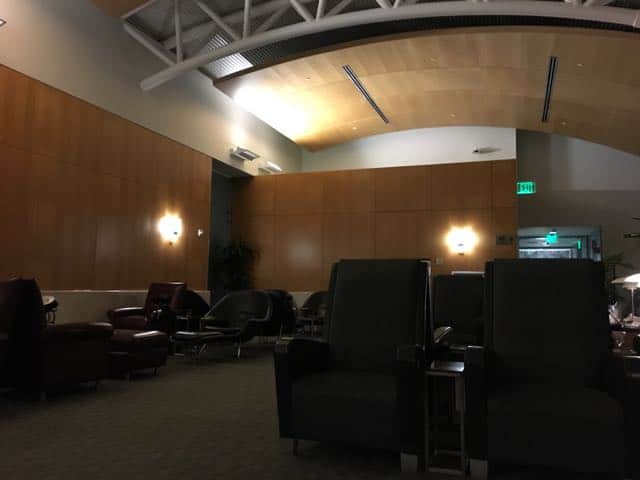 I have heard rumors that a Centurion Lounge is planned for LAX.  Once it opens, I would 100% choose that over the Flagship Lounge.  However, if you are wanting a quiet place to wait for your flight, the American Airlines Flagship Lounge LAX is not a bad domestic lounge.  It is very tranquil and does have real food options (even if they are not delicious) and unlimited drinks that you can make as strong as you like.  That counts for something.