My flight landed in Beijing at 2:00pm local time on Friday evening.  My return flight was to take off at 10:00am on Sunday.  I knew I didn’t want to tour at a breakneck speed; so I tried to be realistic about what I could see in a short amount of time.

I decided to take a taxi from the airport as I had heard the subway could be tough with luggage.  The taxi line is located in the basement level of Terminal 3.  Taxi’s pull in, you put your stuff in the trunk, and you hop in.  I had heard that sometimes there are taxi scams, but if you go to the line, it is directed by security and all the taxi’s that come in are regulated (look for a blue sticker on the back window that says “2.30 RMB”).

My taxi driver spoke zero English, so I took out the map/address I printed off the hotel website.  He seemed roughly to know where it was.  The taxi took about 45 minutes to get to the hotel because of bad traffic.  A note about the way the meters in the cabs work: there is a 14 RMB base fare.  The meter doesn’t start running until you have “spent” that 14 RMB.  Then it will start adding fare to that.  I was a bit worried at first that the meter was broken, but after a bit it started going up from 14.  The total cost from the airport to the hotel, with tip, was 120 RMB or $20 USD.

The Park Hyatt was amazing (read my hotel review).  After getting settled I decided I wanted to explore to keep myself from falling asleep due to jet lag.  I picked up a pocket map from the concierge (who warned me not to take the subway at rush hour) and headed for the subway station.

All of the subway lines are numbered and color coated.  Line 2 makes one big loop through the center of downtown.  The subways are very crowded most of the time, but especially at rush hour.  The subway never cost me more than 5 RMB ($0.80) for a trip, but was usually 3 RMB in the heart of the city center.  I always used a kiosk (in English) to purchase my tickets.  You just pick your destination and it will tell you how much it costs.  You then feed the machine either a 5 RMB or 10 RMB note and it will spit out a fare card and your change.  Cash only as far as I could tell. 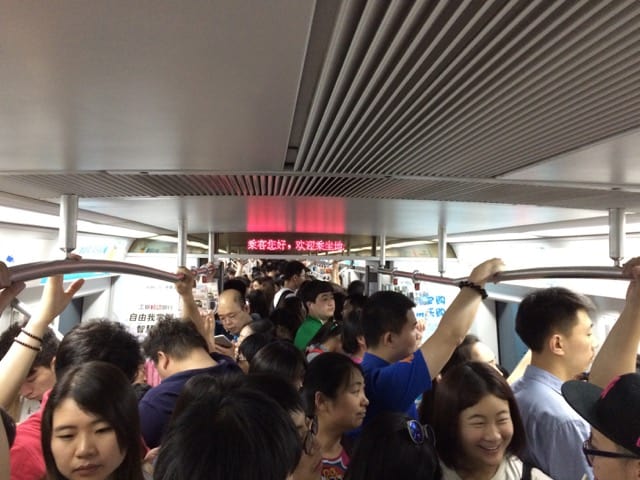 The subway is very efficient; all the times I rode it trains came every 4 minutes.  The trains are quite long and some of them do not have doors between cars so as look down the train it looks like it runs on forever.  Most of the trains I was on were air-conditioned but still warm and humid.

Be aware that before getting on the subway you must go through security.  The security doesn’t seem to be too tight, I think every time I went through I set off the metal detector but they didn’t to care.  It can form quite the bottle neck trying to get through security. 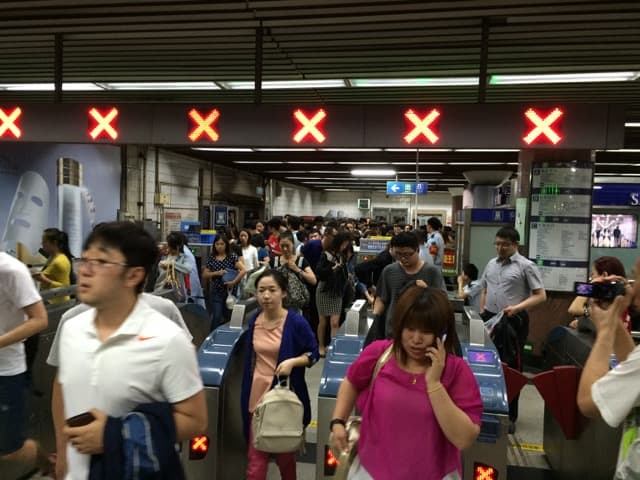 The first evening I headed to Wangfujing — a pedestrian only street with a couple of huge shopping malls as well as a alley with various street food venders.  Quite the juxtaposition to have a modern mall with an Apple Store and Dolce & Gabbana across from a vender selling grilled scorpions on a stick. 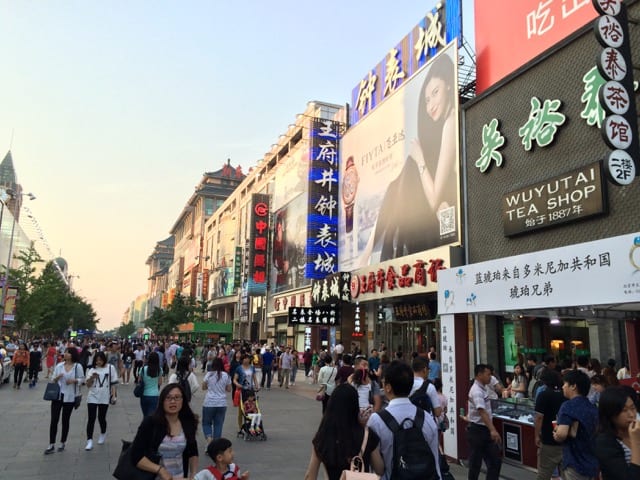 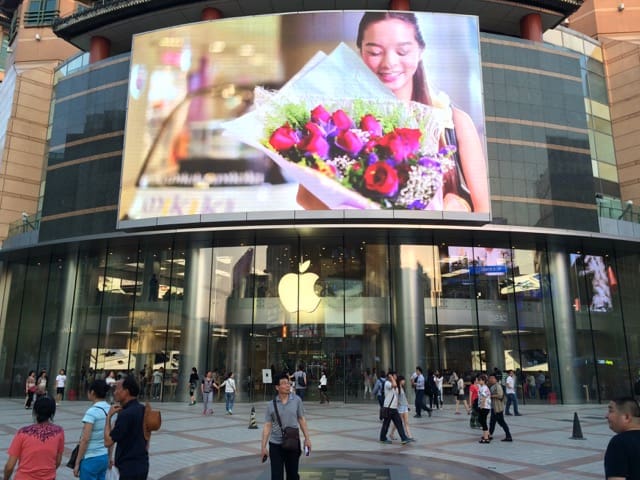 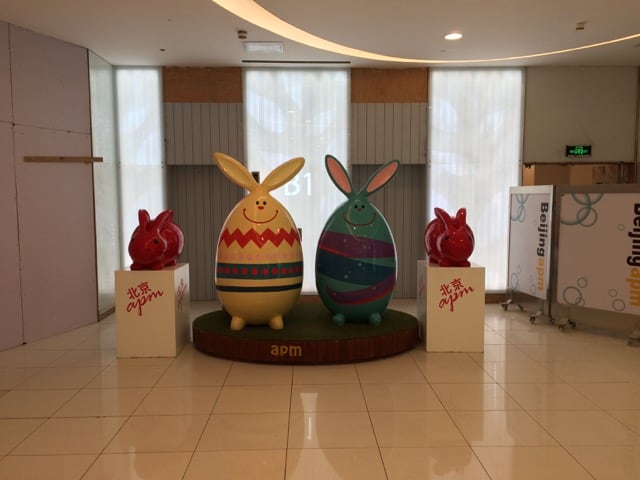 I found a little restaurant that looked to be mostly locals (although who knows) and had some dinner.  Wangfujing is pretty spectacular at night; reminded me a bit of Times Square or Vegas. 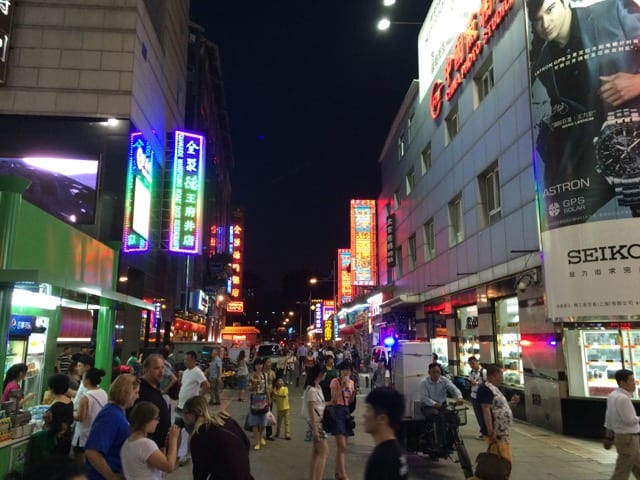 The next day I went to Tiananmen Square first thing as I had heard that crowds can become quite heavy.  Once again, be prepared to go through security to get in to Tiananmen Square and the Forbidden City (which is just across the street from the Square).  Once again I was impressed by the fact that most of the tourists were Chinese nationals.  Many of which were in tour groups.  Like everywhere I was in Beijing, Tiananmen Square was free of trash.  I wouldn’t say clean because there is dirt/dust/pollution, but I rarely saw any garbage on the street, sidewalks, or subway. 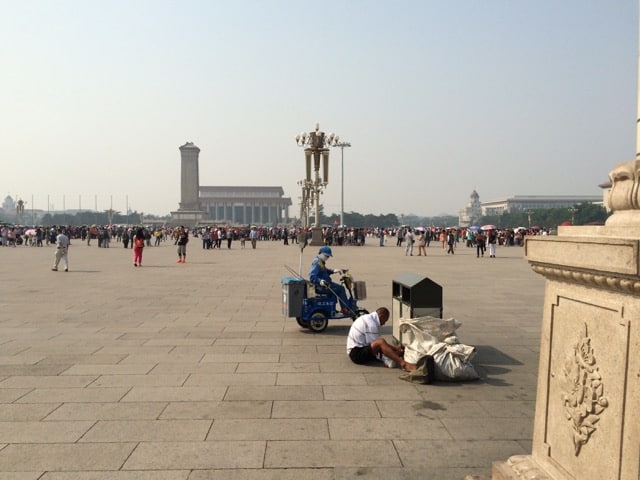 Tiananmen Square claims to be the biggest public square in the world.  It is big.  At the center is the People’s Monument.  The south end is Mao’s mausoleum, the north end is the Forbidden City.

To get in to the Forbidden City, you must take a tunnel under the street from the Square.  You are able to enter the main gate without paying, but to see the interior of the city and all the palaces you must pay 60 RMB.  I would also suggest the English audio guide (that is pretty cool, it senses where you are in the City and tells you about what you are nearby).  I think the guide is an extra 10 RMB.  One thing I was confused by is that the ticket sales are done to the left as you are approaching the entrance to the paid area.  I walked right by it and had to double back. 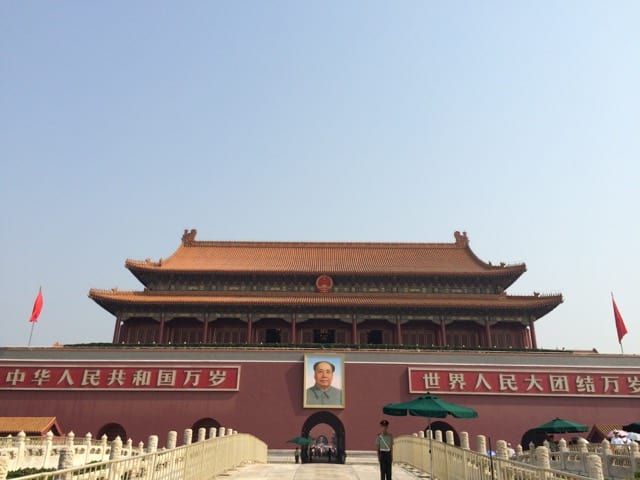 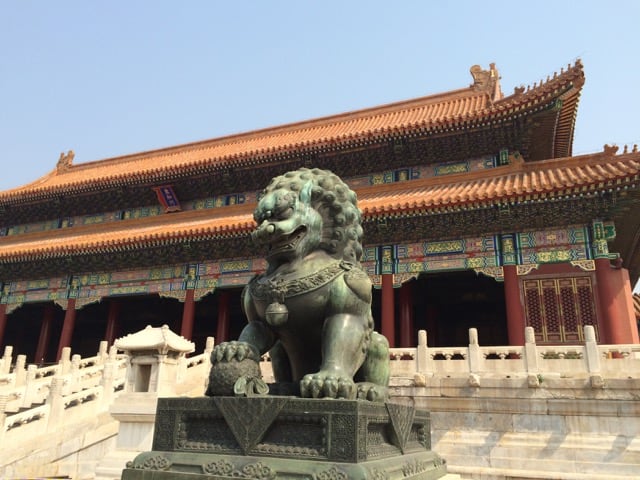 The Forbidden City is a sprawling compound.  Wear good tennis shoes and know that most of the time you are going to be in the direct sun.  They do sell water throughout.  There was no dress code I could tell; I wore shorts and a t-shirt.  Westerners were so uncommon that a Chinese woman grabbed me and had her friend take a picture of her with me at one point.

You must exit through the north side of the City.  Be aware that it is a bit of a maze especially at the north end.  I was totally turned around when I came out.  The one place in Beijing I saw a ton of beggars and people trying to get you to take their tour or rent their services was at the outside of the Forbidden City.  You’ll want to move quickly through this area.

I was hoping to hop on the subway but there is no station right at the exit of the Forbidden City.  I ended up taking a long walk back to Wangfujing to catch the subway back to my hotel.

In the afternoon I visited Qianmen, another pedestrian only street that has been restored to look like it would have when the city was known as Peking.  The most prominent building at the north end of the street is a Starbucks.  Many other chains occupy the old buildings. 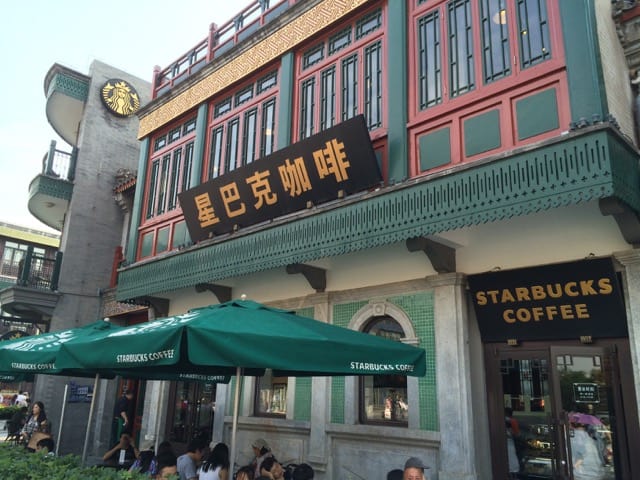 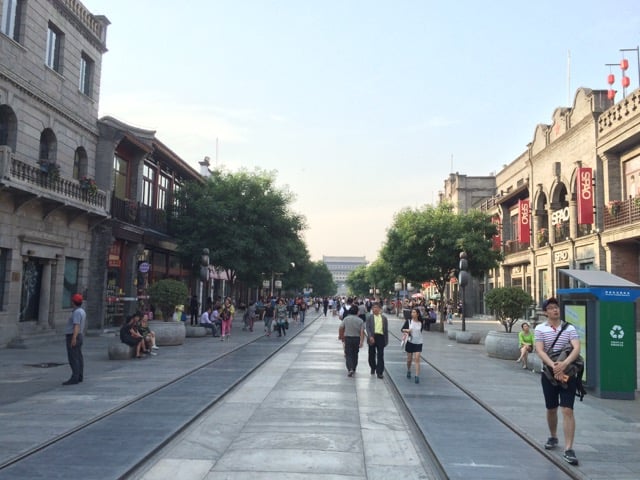 From there I subwayed my way north to the Olympic Park, home of the Bird’s Nest (Beijing National Stadium) and Aquatics Center; location of the 2008 Olympic Games.  The Park is mostly concrete but the Stadium is quite impressive.  I would suggest going in the evening to see the lights on in full effect. 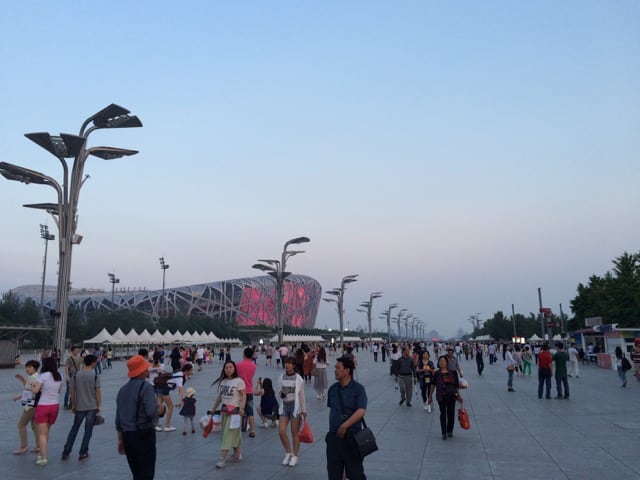 That evening I had dinner at my hotel, packed and prepared to head back to the airport in the morning.

I took a taxi back to the airport and, being a Sunday morning, took only about 20 minutes with no traffic.  This time I paid 100 RMB, including a generous tip.  Lucky for me I was able to us the American Airlines Priority Line as there was quite a line to check in for my flight.

Customs and security are done at Satellite E and was much quicker than my inbound experience.  Once again, there was a shorter security line for Business and First Class.  Customs did not have a priority line.

There is not much to see at the airport; you can do some shopping to spend up the rest of your Chinese currency.  I took 1,000 RMB (about $160) and ended up at the airport with about 500 RMB.  Granted I put the hotel on my credit card; but I was still surprised I managed to not spend any more.

As an AA Business Class passenger I was able to use the Cathay Pacific lounge; mainly to drink a bunch of water to hydrate for the long flights home.  I was again seated next to a passenger who had also purchased his ticket through the amazing deal.  This time the flight attendants were MUCH better, so much better in fact I wrote to American Airlines to compliment my main attendant.  Food was roughly the same as on the inbound flight.

From the time the plane touched down in Chicago to the time I was through customs was 20 minutes due to the fact I had my Global Entry membership.  Scan your passport and fingerprints at a kiosk, take your print out and walk right by the border enforcement to a customs agent.  Nothing to declare?  Nope.  Keep moving and done.

I was able to visit the Admirals Club in Chicago ORD before boarding a quick flight to DC in First Class.  I went to the Club between H & K terminals; I believe it is the bigger of the two.  It had a shower which was much appreciated after my 13 hours on the plane. 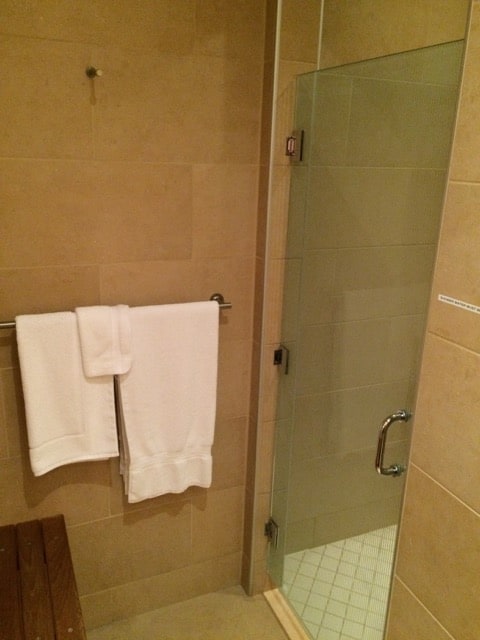 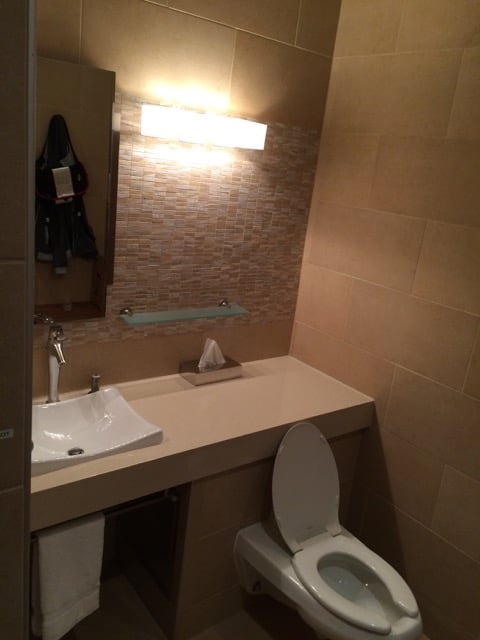 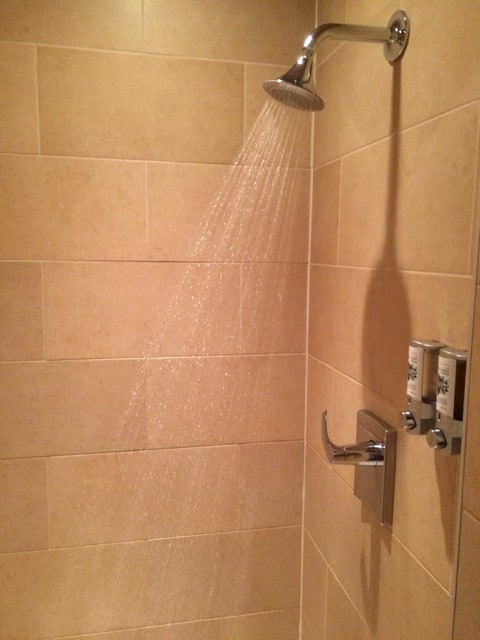 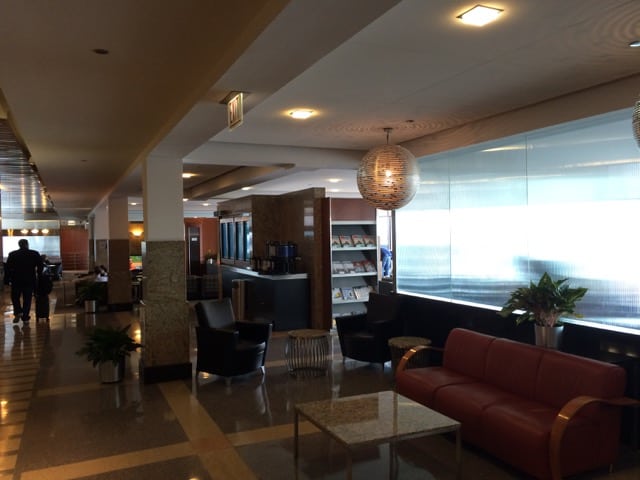 Back to the Admirals Club at DCA Terminal B before flying on Alaska Airlines back to Seattle in First Class (got upgraded due to my MVP status).

It was a thoroughly exhausting trip.  But a great way to see a new city and only take 2 days off work!  I now have a 10 year Chinese visa so I may plan a visit to Shanghai if I can get a good deal.  In the end I received a total of 34,308 miles (with bonuses for being an Alaska MVP and class of fare).  24,302 of the miles were Elite Qualifying when I applied them towards my Alaska Mileage Plan.