I’ll admit it.  I’m a sucker for a good contest.  I’m not sure which came first, my love of travel or my love for winning contests.  It is a chicken/egg mystery.  Lucky for me, there are a ton of contests where the prize is travel.  I have been known to sponsor a contest of my own from time to time.

Contests are a great way for companies to build excitement for their brand.  And with companies that specialize in travel, that is important.  The rise in social media has allowed for endless contest possibilities and increase the visibility of a brand.

While I will enter contests with low barriers to entry (filling out an online form, liking a Facebook post), my favorites are the ones that have a high barrier to entry.  In other words, contests where it takes some time, energy, creativity (and sometimes some research or knowledge) to enter.  I have found that these contests offer a much better chance of winning (as it takes an investment to enter which scares away some from entering).

Here are a few examples of travel contests I have entered and won over the past few years.

The first contest that hooked me was one that I actually didn’t win.  I was fortunate enough to be the +1 to the winner of the contest.  The prize was a trip to see the Seattle Seahawks play in Washington DC for the Wild Card round of the NFL playoffs.  It included 2 round trip tickets from Seattle to DC on Alaska Airlines, two nights at the Hyatt Regency, and tickets to the game.  Two winners were drawn.

The contest was sponsored by Washington State Lottery.  To enter, you had to go to one of our local malls on a specific day and purchase two $5 lottery tickets.  My friend and I each invested $20 in lottery tickets which gave us each two tickets into the drawing. 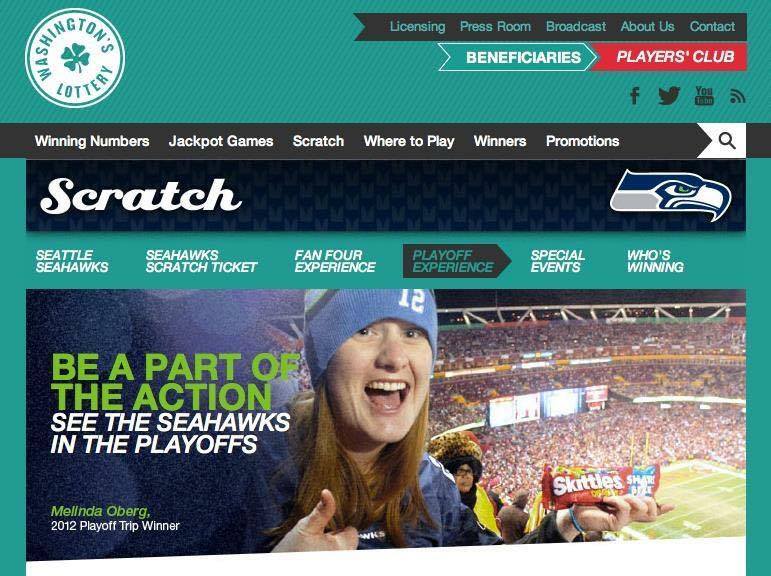 When it was time to draw the names, my friend was the first name drawn.  The trip was a ton of fun (and we even earned miles for the flight since it was the Seahawks team that purchased the tickets for us).  We were put up at the same hotel as the team and got lots of opportunities to mingle with them.  And the Seahawks won! 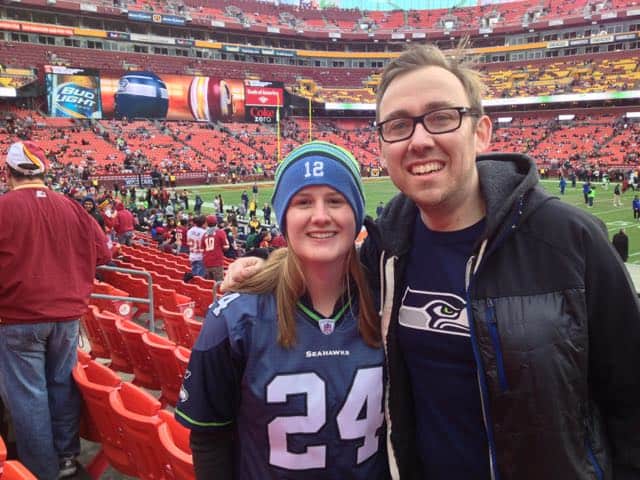 Read more about my experience with the trip here.

The IHG Priceless Surprises contest of 2015 was one that received a lot of coverage from blogland.  While the contest was set up to encourage people to stay at IHG properties (Holiday Inn, Crowne Plaza, etc), a lot of people, myself included, entered through the “alternative entry” method.

To enter, you had to send in a handwritten 3×5 card with your contact info and IHG number.  The address on the envelope could be printed (which saved me a lot of time).  Each IHG member could enter a total of 94 times.  I entered the maximum amount of times.  Once the contest company (HelloWorld) received your card, they would email you a link that gave you an entry in to the instant win contest. 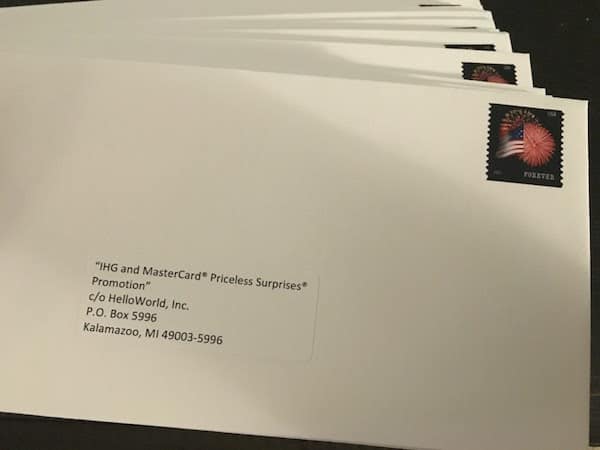 The part that made the contest so lucrative was that every entry won a prize.  Most of the prizes were IHG Points.  I won a total of a bit over 50,000 points — enough for a free night (or two) in a hotel.  In addition to points, I also won three $50 prepaid MasterCard gift cards.  Others won free nights or various other prizes.

For the cost of 94 First Class stamps and the time it took to write a bunch of cards, I earned enough points for two free nights and $150 in prepaid gift cards.

There are over 200 pages on FlyerTalk devoted to the contest.

Alaska Airlines social media is fantastic (even when they don’t mean to be).  One of their go-to contests is the scavenger hunt.  Being that I live in Seattle (where most of their scavenger hunts take place), I have had fun searching the city during their contests.

Typically the scavenger hunt is at a pre-determined time.  Sometimes there are multiple locations throughout a day where you can follow clues to win a prize.  As Alaska Airlines has grown, they have expanded their scavenger hunts to other cities and states.  First person(s) to find the social media team based on a clue wins the prize.

Most often the prize is two round trip tickets on Alaska and depending on the theme, might include something additional like tickets to a sports game or a prepaid gift card.

The contest I won was sponsored by Alaska Airlines during Seattle Pride.  They announced that the first clue would be put up on Twitter at 9:00am.  I figured that the clues would be along the Pride parade route; so someplace in downtown Seattle.  At the time I lived a few blocks up from downtown, so at 8:45am I headed downtown to a central location and waited for 9:00am to roll around.  Right at 9:00am, they posted the following clue: 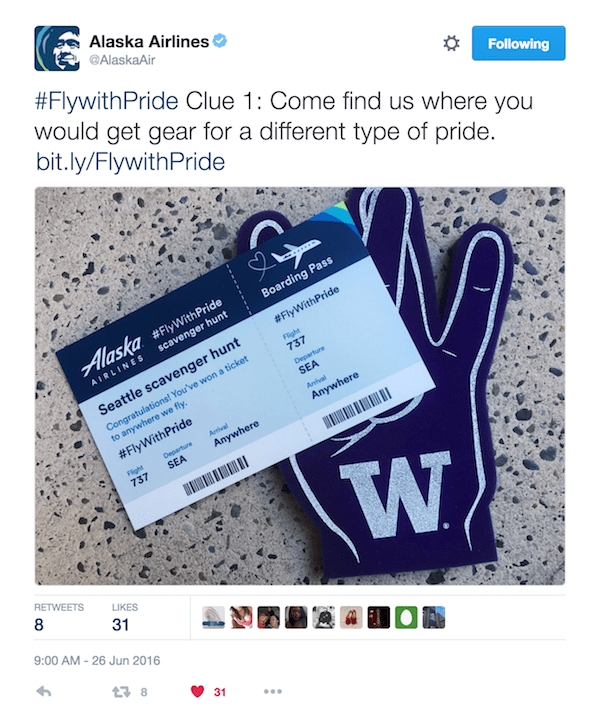 I sprinted to the downtown branch of the University of Washington Bookstore.  I was the first one there and won two tickets anywhere Alaska flies. 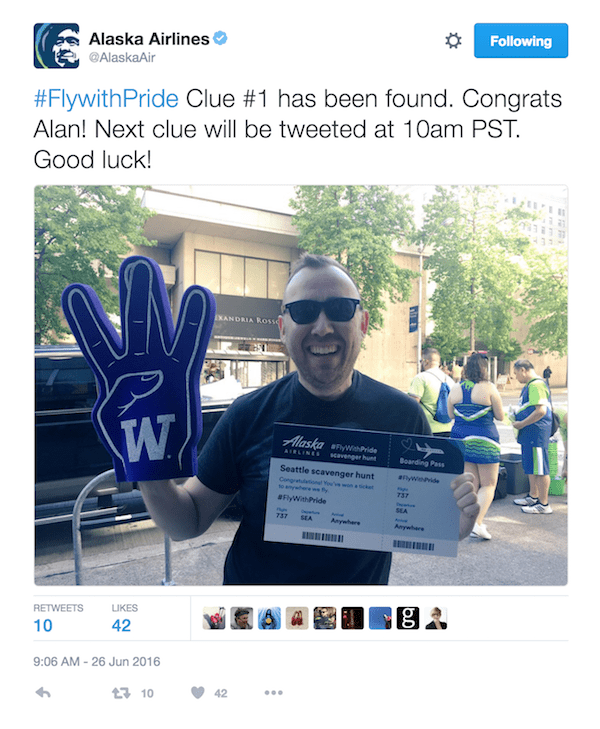 I ended up using the tickets to go to Kona, Hawaii with my mom (my +1) and sister’s family.  Of note, although the ticket was eligible for MVP upgrade, the flight did not earn miles.  I guess you can’t have it all.

My most recent contest win, and probably the most elaborate prize, was one sponsored by the Seattle Sounders (Major League Soccer) and Delta Airlines.  In order to enter, you had to write 11 words about why you, as a Sounders fan, were the definition of one of eleven superlatives.  The superlatives included “The Dynamic Duo”, “The Host”, “The Stats Guy”, etc.  This contest had judges from Delta corporate that selected the winners and required some creativity.  It was a medium barrier entry contest; it required more than just entering your name and email but could still be done from the comfort of your couch.

Each of the eleven winners (and a +1) received round trip flights from Seattle to LAX on Delta, two nights hotel stay, food, transportation, and tickets to a soccer match.

You can read my post about the trip here.

So what’s the trick?

Here are the lessons I’ve learned from entering and winning travel contests.

Typically companies are quick to send you the prize and go out of their way to treat winners well.  The only exception for me was winning a contest from Virgin Hotels in Chicago.  I won a full year ago and still have not received my prize.

Have you won a travel contest?  What was the prize?  What is your advice for winning travel contests?  Please share in the comments.