Sometimes some levity is needed.  Tonight Alaska Airlines very responsive social media team provided that for us.  This post is frivolous but hopefully fun; please don’t read too much into it!

Tomi Lahren, an alt-right political commentator, was having some problems with her flight from Spokane to Seattle today.  She tweeted out “Most dysfunctional airline award goes to @alaskaair”.

While I would beg to differ, that isn’t the point.  I’m sure she had her reasons (delayed flight, lost baggage, who knows) for expressing this frustration.

Hi Tami, sorry for any troubles. Can you DM some details on where you experience went south? -Ryan https://t.co/t4ooDR29zz

While an honest mistake, the “twittersphere” loved it.  Alaska’s response was retweeted 3,400 times in the first few hours and received over 10,000 likes.  Tomi Lahren, like many pundits, is thought to be rather self obsessed by those of an alternate political persuasion.  I can only assume that is why other users responded with tweets like:

Omg. You win the internet today. I’ll fly Alaskan airlines from now when possible just for that typo.

I swear I’m flying @alaskaair the next chance I get.

Tami you can always fly United

And numerous GIFs and calls for Ryan to get a raise.

Social media is a strange and wonderful tool.  I honestly believe that Ryan made a simple typo in his otherwise very courteous response.  In the end, Alaska just gained some positive name recognition for thousands on the more left leaning political spectrum — probably some of whom live on the West Coast where Alaska is currently expanding. 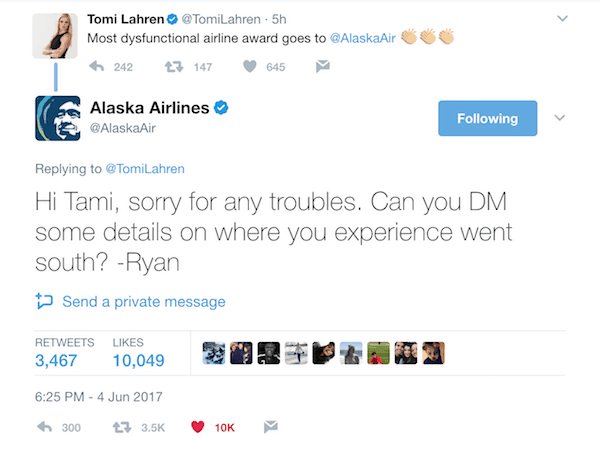 1 thought on “Alaska Airlines Gets Kudos After Accidental Typo”