What is it with me and hotels in Chicago?  Back in September Virgin Hotels ran a contest called “Chamber Games” where you had to watch a webcam and then tweet when you saw the video that corresponded with a clue given out on Twitter. 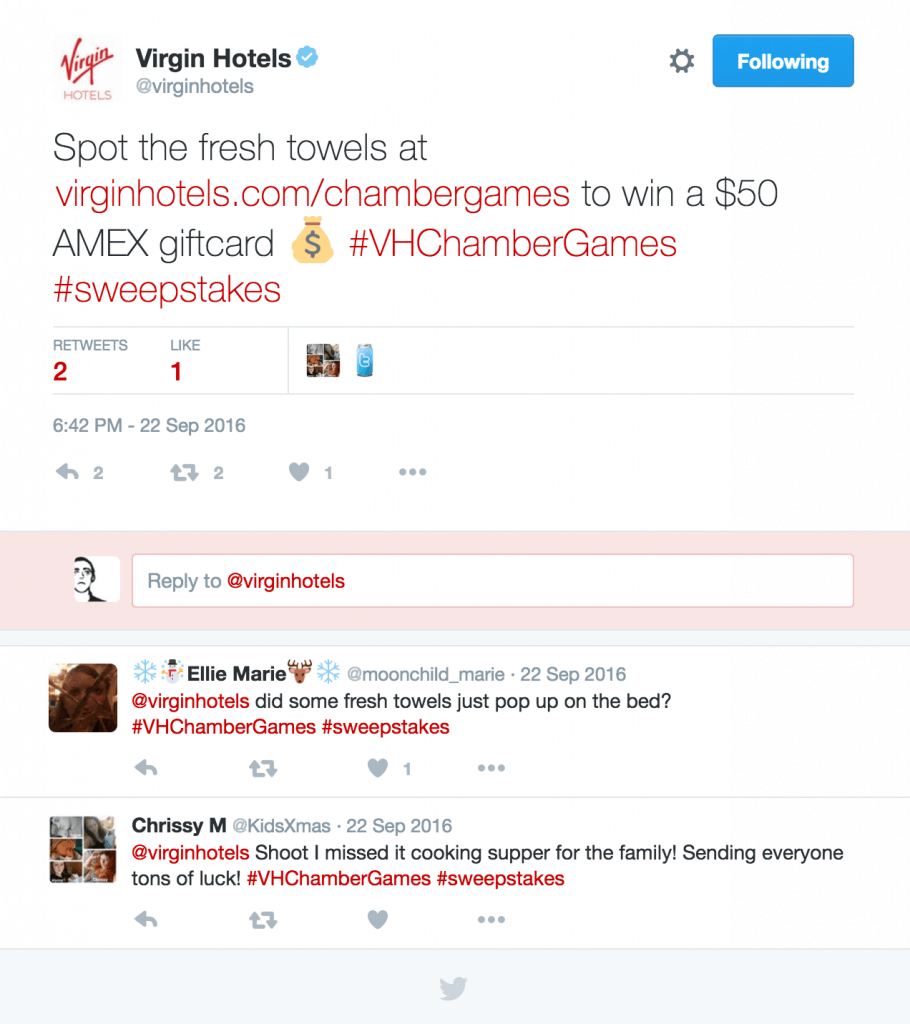 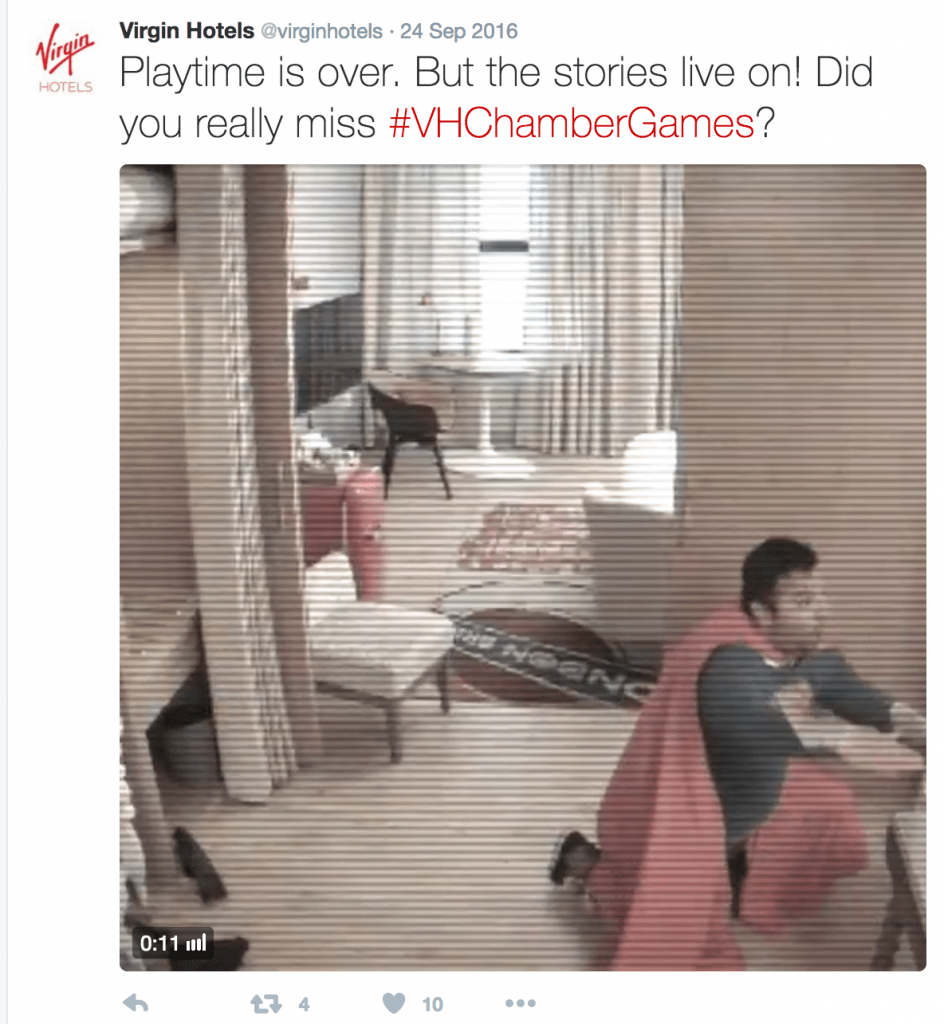 I was notified on September 28 that I had won one of the prizes (there were gift cards, gift baskets, etc).

You came. You saw. YOU WON! Congratulations, you have been selected as a winner in Virgin Hotels “Chamber Games” Sweepstakes. To claim your prize, please send us your full name, mailing address, email address, age and phone number via this thread! Lots of love, The Virgin Hotels Team xoxo

I sent back my info and received this tweet: 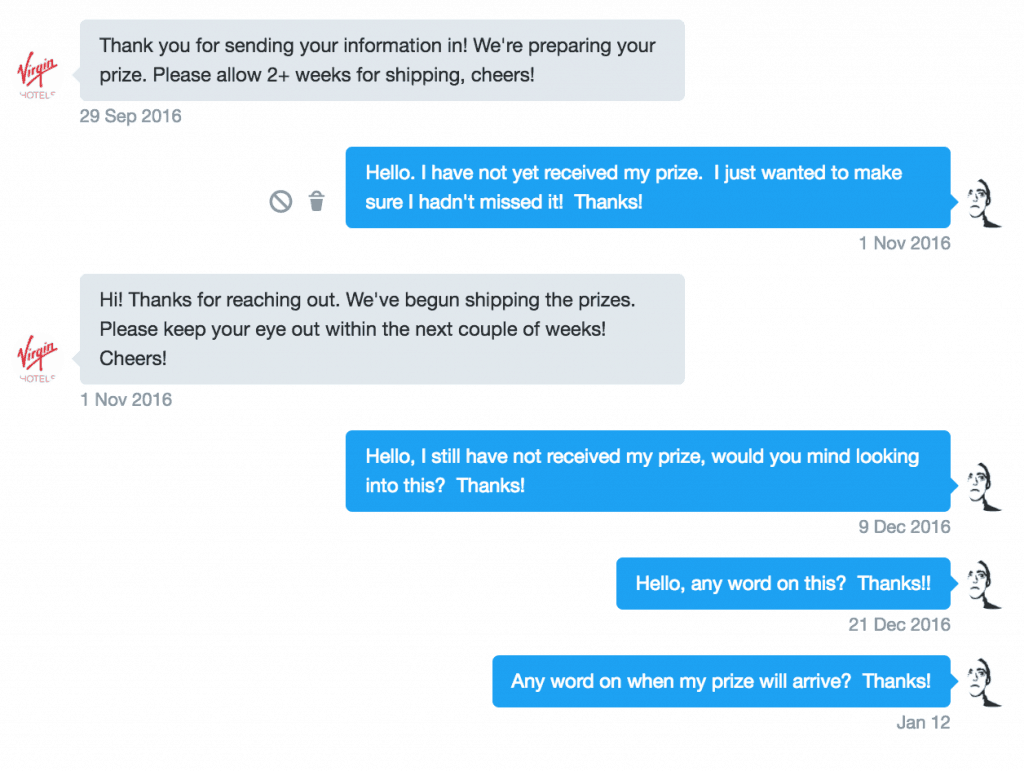 Thank you for sending your information in! We’re preparing your prize. Please allow 2+ weeks for shipping, cheers!

And waited. I then sent a tweet to them on November 1. This was their response:

Hi! Thanks for reaching out. We’ve begun shipping the prizes. Please keep your eye out within the next couple of weeks! Cheers!

I then sent a tweet again on December 9. No response. My subsequent tweets have received no response. It is now nearly January.

Did any of you also win a prize through this? Did you receive it? Seems super sketchy that they would fun a contest and then not follow through. I feel like I have given them a number of chances to make it right.

At this point I don’t really care about the prize, just more annoyed at the way it was handled.  What would you do if you won a contest from a hotel (or any travel company) and never received it?

UPDATE: I finally received a response from the Twitter team on March 22 asking me to contact an employee of Virgin Hotels along with her email address.

I emailed her that day and received no response until April 21.  The email said:

Hi Alan, I’m confirming to see if you received your prize? Let me know!
I responded that I hadn’t, and then sent three additional emails over the past 4 months.  It is now September 2017, a full year since the contest, and I haven’t received any other communications from the Virgin Hotels team.