My flight out of Copenhagen was at 6:00am so not much was open in the CPH airport.  I was able to briefly stop in the Aviator Lounge that is free with a Priority Pass.  Like much of CPH, it was quiet, modern and clean.  Read my full review here. 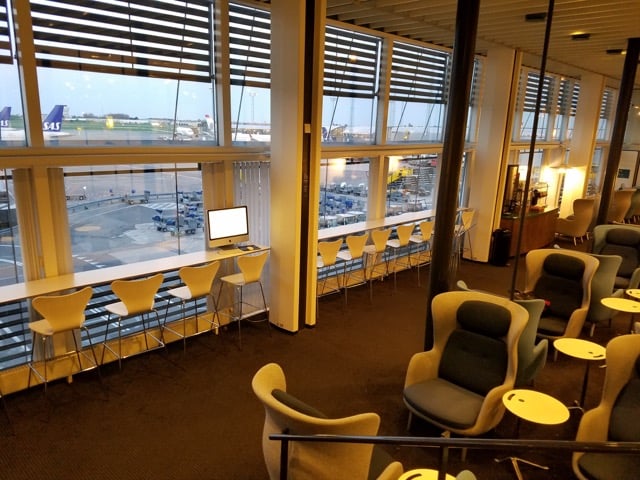 The flight was nearly full and the premium cabin was larger than on my CDG-CPH flight.  While this was KLM metal and a 737, it still felt similar to the Air France A320. 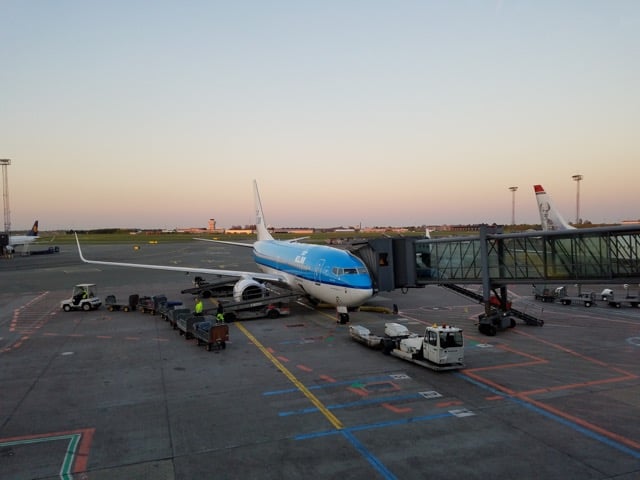 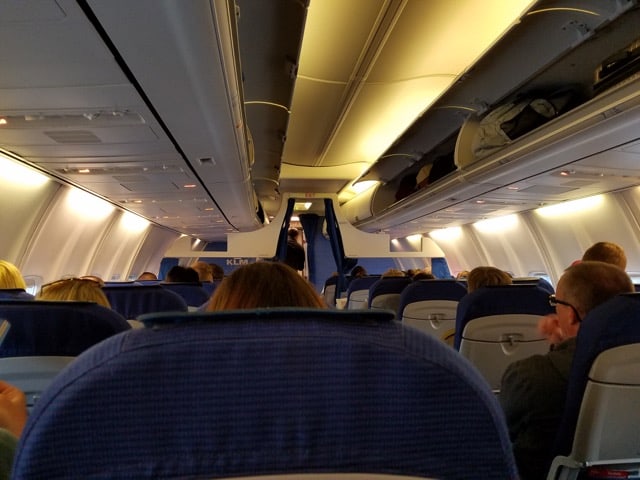 Even though the flight was less than an hour in length, we were served bread with cheese and cream cheese for breakfast.  The box it came in was very Holland. 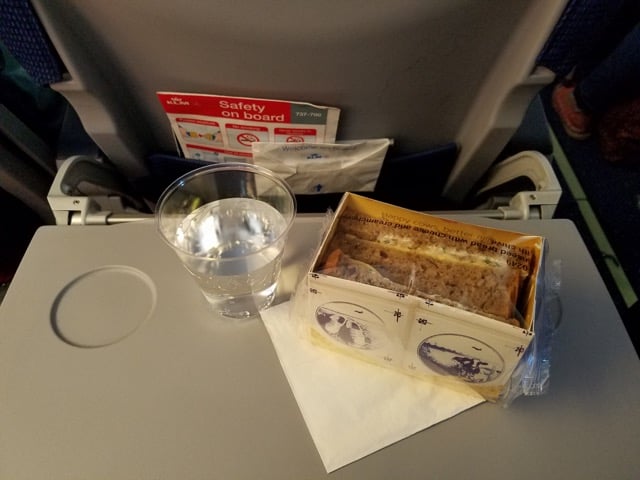 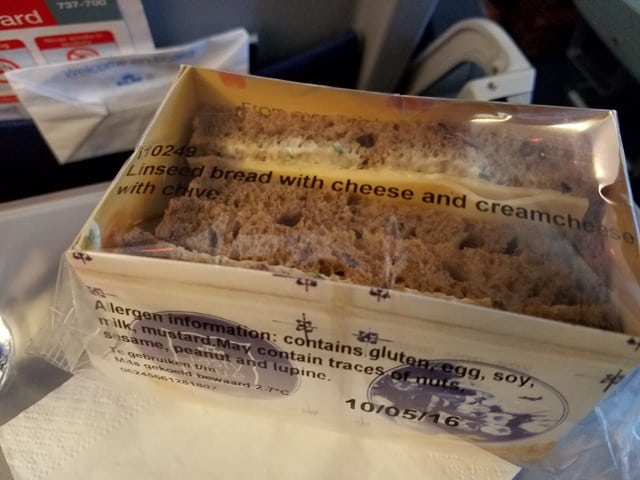 Amsterdam was much easier to transfer than CDG — fully staffed passport control had me through quickly.

The odd thing about flying Delta out of AMS is that you have to go through this odd pre-boarding ritual at Gate D1 or E4.  No matter where you flight is actually taking off from, you must clear the security processing.  Delta calls it the new “Pre-Departure Center”.  From the website:

(AMS) – TRAVEL THROUGH & FROM AMSTERDAM, NETHERLANDS

Customers departing Amsterdam’s Schiphol Airport (AMS) to the United States will report to a new Pre-Departure Center (PDC) for required security checks at either gate D1 or E4. Delta One™ and Business Class customers or SkyTeam Elite Plus members can expedite their security check at the KLM Crown Loungeopens in a new window.

Here are some helpful tips upon arrival:

It was staffed by non-Delta employees.  You queued up in a line and when it was your turn, you were greeted by a staff member and taken to a kiosk.  I was asked more questions then I have ever been asked when traveling — including what hotel I stayed at in Copenhagen and was required to show a receipt from my stay.  My bag was not searched and I didn’t have to go through an additional metal detector.  There was still secondary security screening at my gate before boarding.

Once I finished my questioning I was sent to another staff member who printed off a paper receipt that told me where my gate was (next door at the under construction Gate D3).  I had some time so I went to the Aspire Lounge (41) to kill some time. 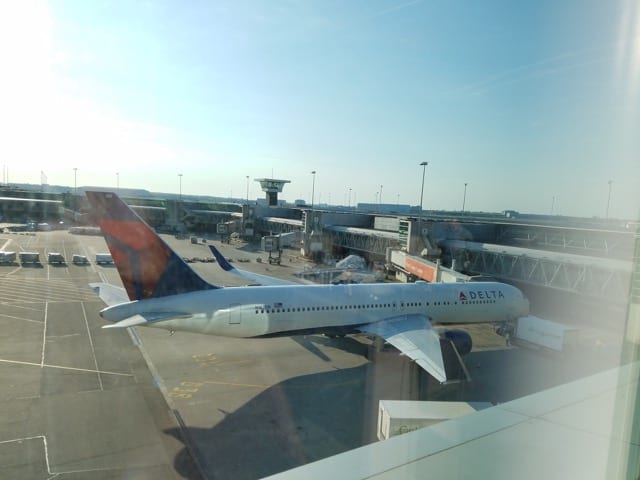 The boarding area for the flight was under construction and a bit of a mess; however it was no where near a full flight so that made the boarding process bearable.

I had seat 21G which was the window seat on the second emergency exit row over the wing.  Originally I had a passenger next to me but with the low passenger load, he was switched to the first emergency exit row (20) and I had the entire row (two seats) to myself.  Plenty of leg room (although not as much as on my other transatlantic leg).

The first thing to note about the flight is that it was freezing.  This says a lot coming from me.  I am always the one that wants to turn up the AC, turn down the heat, etc.  However this was the coldest I have ever been on a flight.  I am guessing the emergency exits on this ancient plane are not well insulated.  The passenger in front of me also commented on how uncomfortable the flight was.  Lucky for me I was able to use a second blanket to help keep me a bit warmer on the flight.

The other thing I immediately noted on the flight was although it was only about half full, the Comfort+ section was completely full.  I felt bad for the poor passengers that actually paid extra to sit in those seats.  While the rest of the passengers on the plane had empty seats next to them (myself included), those in Comfort+ were squeezed in like sardines. 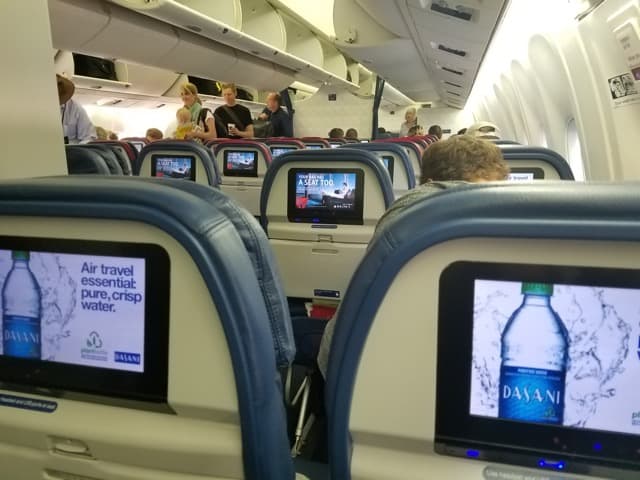 The negative about my seat location was, again, that it was right next to the lavatories.  This 767 had two lavatories in the middle of the cabin; literally next to my row (I could reach out and touch it).  Note: I ended up displaying symptoms of what was most likely Norovirus about 36 hours after this flight.  It is possible it was contracted from a source other than this flight, however the timing leads me to believe I contracted it here.  I will never know and can only speculate.  I did alert the airline in case it was from the plane so they could do a deep clean to prevent additional cases.

I was again given the standard Economy amenity kits (eye shade, ear plugs, ear phones) as well as a blanket and pillow (two of each since no one was sitting next to me).

The flight attendants were efficient but friendly.  The attendant serving my section had been with Delta for 30 years.  Another was celebrating her 40th anniversary with Delta on our flight!

Soon after take off we were served the main meal of the flight.  I had the chicken cobb salad which was good. It was served with a side of fruit salad, pretzel roll, cheese and crackers and brownie. 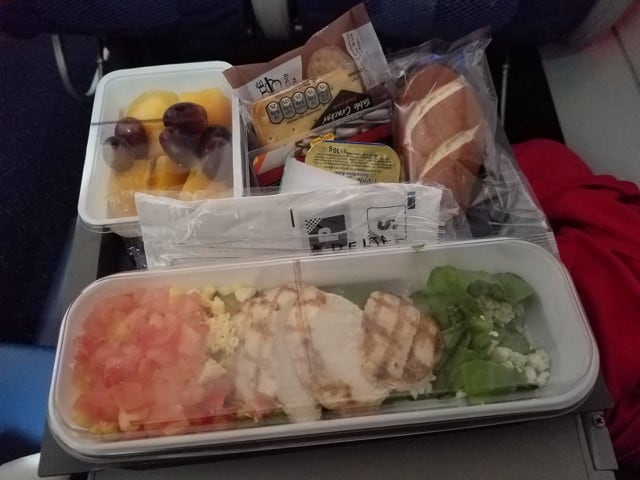 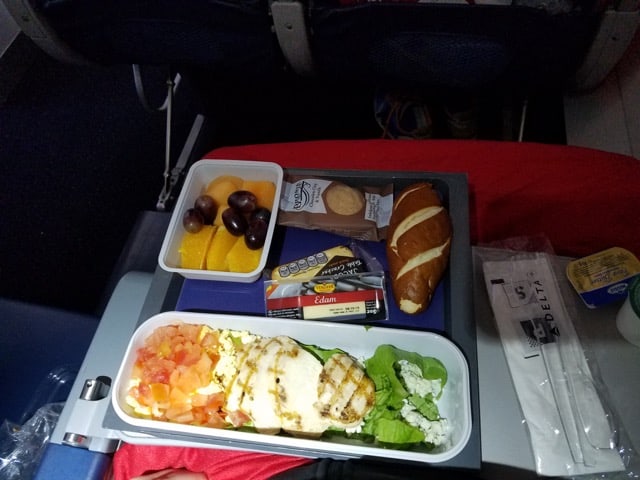 I slept for nearly the entire flight so I missed the mid-flight snack (if there was one).  A light lunch was served just before landing in Salt Lake City that consisted of a chicken and cheese sandwich and some delicious gelato. 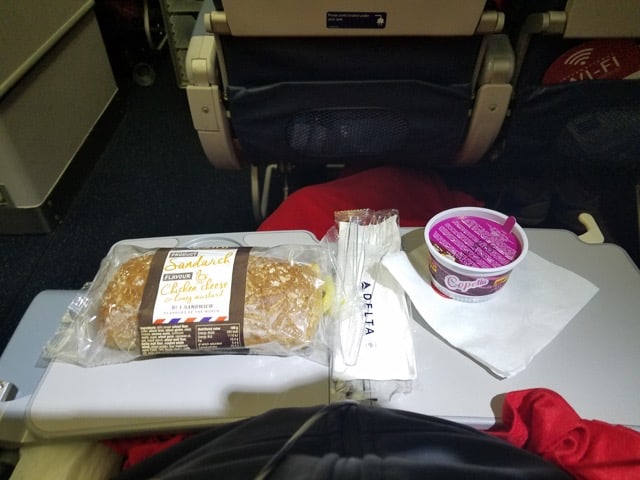 We landed a bit early and immigration and customs was not ready for us.  We ended up having to sit on the plane for 20 extra minutes and then once we deplaned, had to wait in a hallway another 20 minutes before being processed.

I dropped the SLC-BUR leg of my flight to save some time getting home.  I spent a bit of the layover at the Delta Sky Club and let the staff there know I would not be flying the segment so they could free up the seat for someone else.  As I had a 5 hour layover, a friend in Salt Lake picked me up for lunch and I was still able to hop on an earlier flight back to Seattle.

Unfortunately to get on the earlier flight I had to give up my First Class upgrade, but at that point it was worth it to get home.

Alaska has a few flights operated on Bombardier CRJ-700 aircrafts by SkyWest.  These planes are a 2-2 seating layout with no First Class.  Even though I was only confirmed a spot on the flight about 30 minutes before departure I still got an exit row; score! 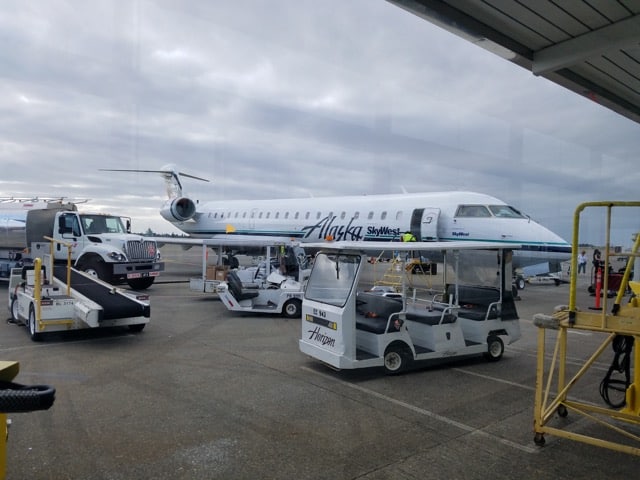 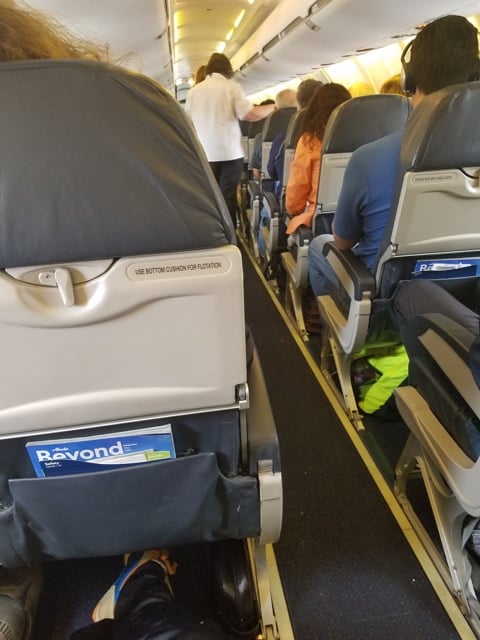 SkyWest operates these smaller planes and the crew are not Alaska employees and, sadly, it shows.  They were not bad, but I wouldn’t say they were up to the Alaska standard.  I was not acknowledged for my MVP status and wasn’t offered a free drink.  Oh well, I was just glad to be heading home!