After spending New Years Eve at the InterContinental, it was time to move to the Grand Hyatt Singapore.  A Category 5 property, I booked my stay on Points + Cash.  I wanted to use a Diamond Suite Upgrade but it was not available. 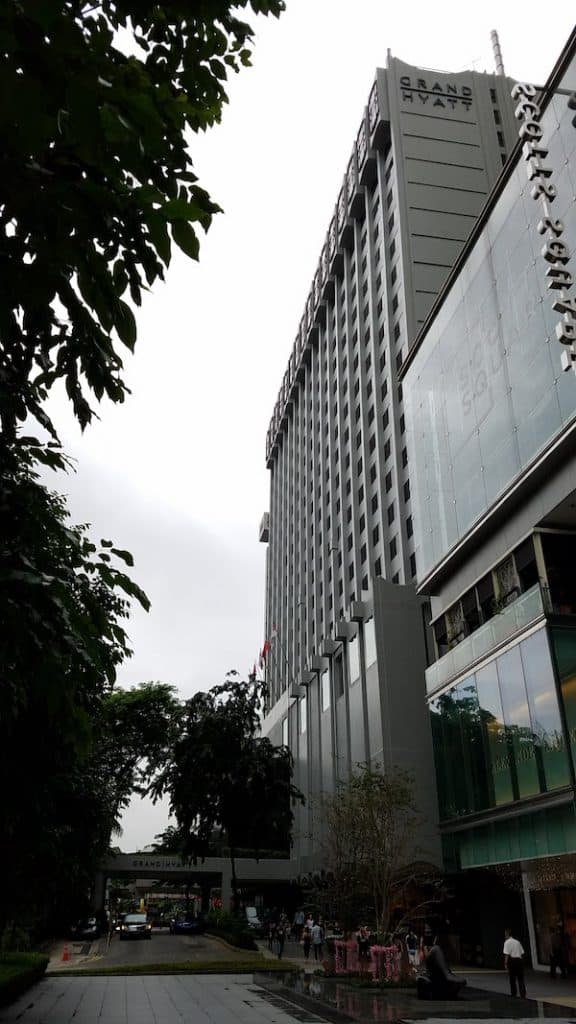 Location: The Grand Hyatt Singapore is located just off of the shopping area of Orchard Road.  I found Orchard Road to be pretty boring unless you are into shopping.  There is an MRT station in the basement of an adjacent mall that connects to the North South Red Line.

As I said, there are shopping malls all over Orchard Road.  Directly next to the Grand Hyatt Singapore is the Far East Plaza with a more local feel.  Or walk down to the corner for the modern ION Orchard mall with a huge food court in the basement.

Check In: Arrival and check in at the Grand Hyatt Singapore was probably the most personalized I have ever experienced.  Two staff were waiting at the door with iPads.  When I said I was checking in they took my name and before even typing anything in said “Oh yes, we have been waiting for you.  We have a great room for you.”  They then walked me to the elevators, bypassing the front desk and took me straight up to my room on the 14th floor.  On the way she explained I had been upgraded to a suite as a Diamond member. 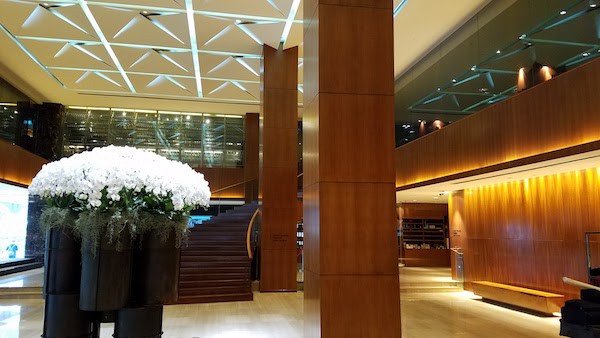 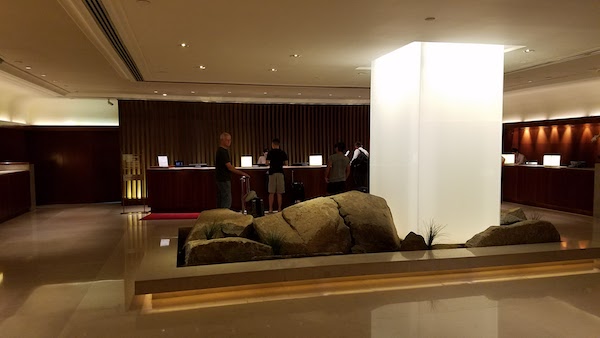 The room wasn’t a suite, but I think it was larger than most standard rooms.  It was almost in the corner of the building and was a wedge shape.

Once in the room, the staff took my credit card info by hand, writing the number down on her piece of paper.  This seemed strange to me.  Had I wanted to use the same card I used to reserve the room I don’t think she would have needed to do that.

She explained to me everything I would need to know, including info about the Grand Club.  I was also offered one free “pressing” of an article of clothing.  I didn’t end up using it but nice amenity.

Room: My room at the Grand Hyatt Singapore was an odd shape.  As you entered there was an open space with mini bar on the left and desk to the right.  Right in the middle was a modern chair and footstool. 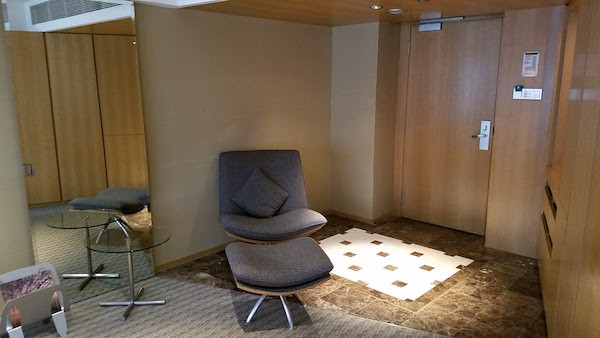 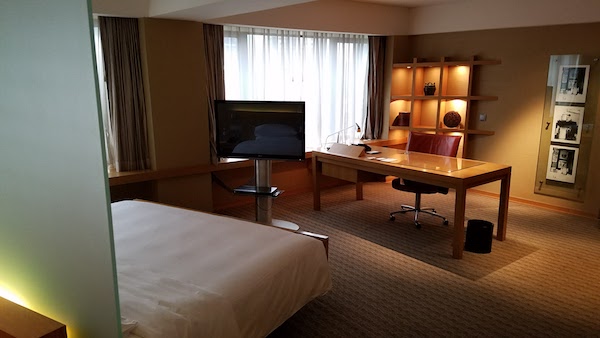 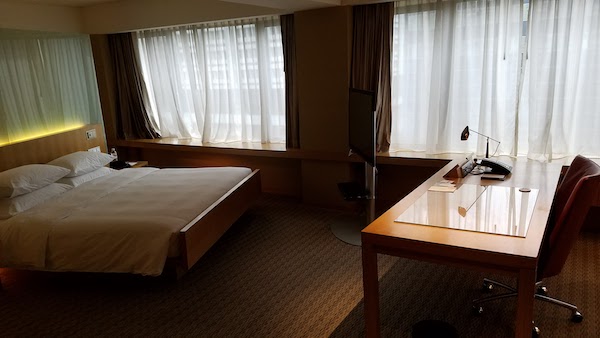 The room opened up to the bed that was in the middle of the room with a divider wall behind it. 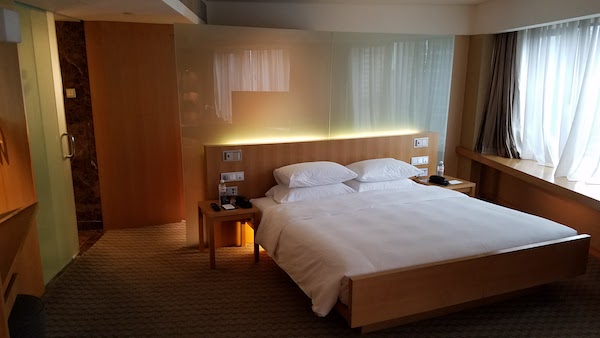 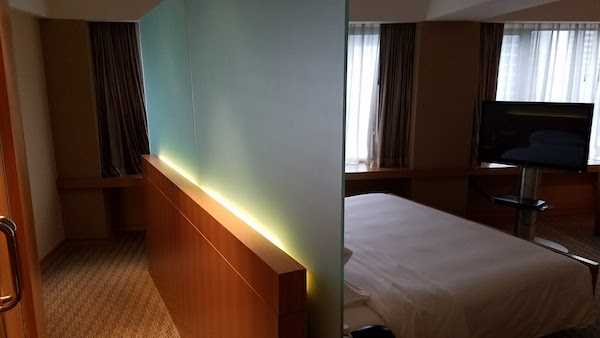 A vanity was just off to the side of the bed.  A large closet was behind the bed.  While it had doors, one side was open to the rest of the room.  Quite an odd set up. 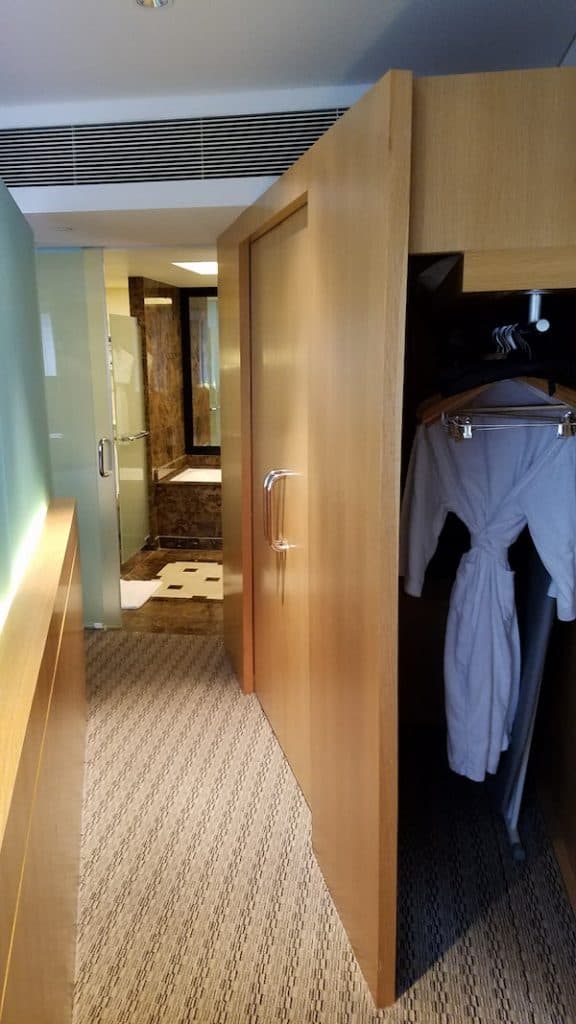 Overall it had an early 1990’s vibe and could definitely use some updating.

I found that a lot of the functions of the room did not work.  When I was unpacking I found a piece of a light fixture on the desk that had fallen from the ceiling.  Half way through my stay the outlets on either side of the bed stopped working.  The light over the vanity went out as well.

Another oddity was the fact that the only thermostat in the room was next to the bed.  It was like what you would find in an older car; a small knob that you turn one way for warmer and the other for cooler.

Bathroom: The bathroom felt like a typical, slightly outdated Grand Hyatt bathroom.  At one time the height of luxury with marble, now it felt like it needed a modern update.

The counter had a single sink but plenty of counter space.  A large soaking tub was separate from the shower. 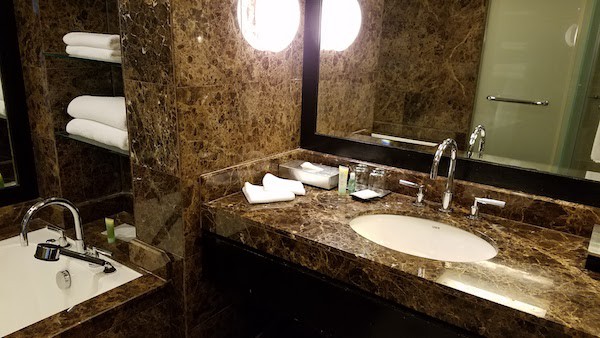 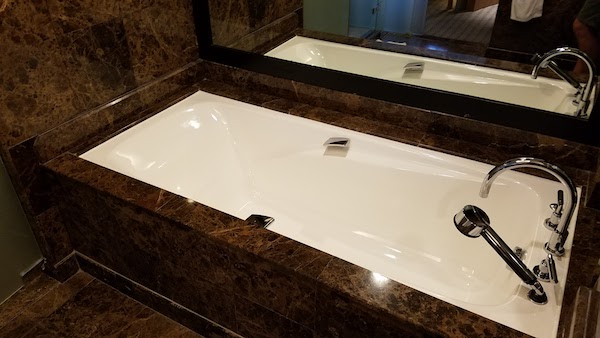 The shower and the toilet both had their own, glassed in cubicles.  A frosted glass door separated each area as well as separating the bathroom from the rest of the room.  Not much privacy.  In fact, one part of the shower wall was glass that looked at the bed.  Although frosted, it left only some to the imagination. 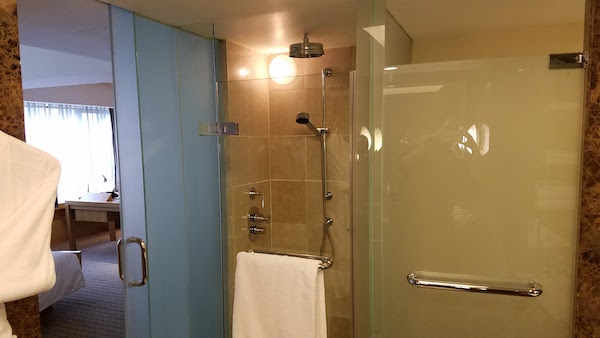 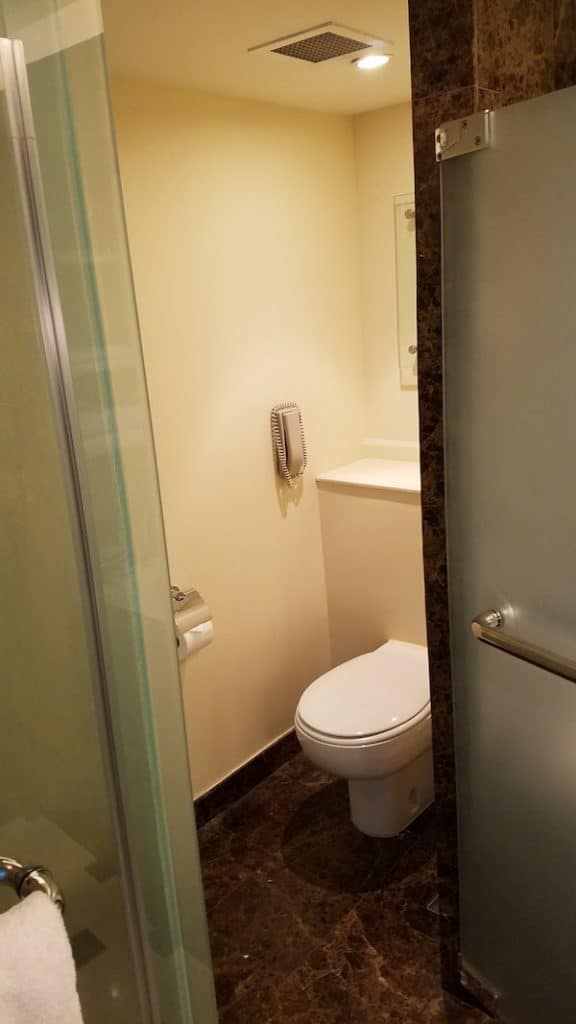 The bath products at the Grand Hyatt Singapore were all the nasty June Jacobs that is standard in Grand Hyatts.  But there was a box of various additional amenities including full size toothbrushes and travel size toothpaste. 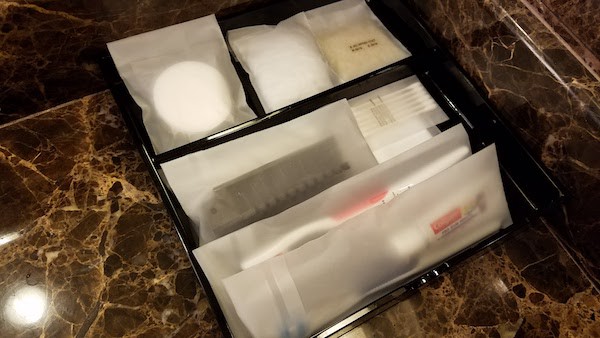 Pool/Gym: There are actually two buildings to the Grand Hyatt Singapore connected via the lobby.  The smaller tower is mostly residential units.  The pool, gym and spa are in the residential side.  Because of that, you can take the elevator down to the lobby, cut through the lobby, and go up another elevator.  Or you can take the elevator to the 4th floor from your room, take quite a walk along the roof top garden and down some stairs to the recreation area.

The pool is nice enough, but they warn you right off the bat that there are bugs and offer bug spray.  There is a restaurant (mostly locals were eating there when I visited) pool side and little buttons by each chair that you press for service. 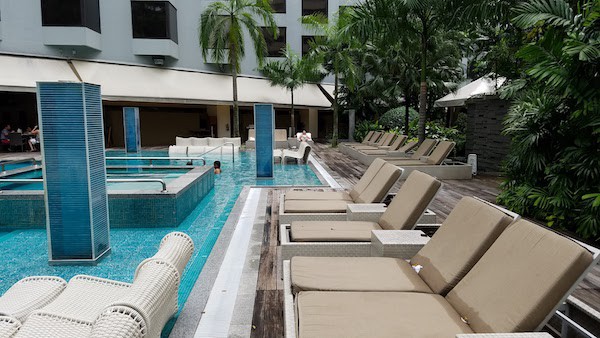 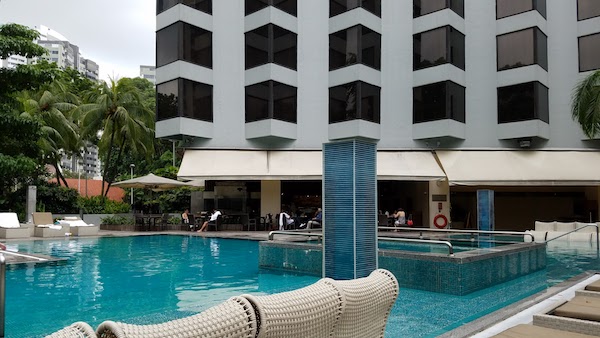 As soon as I arrived it started raining, so I took a couple photos and headed for the gym and spa area.

The gym is quite large with all the standard work out equipment.  The spa is accessible for free as a guest to use the facilities.  There is a hot and cold pool, sauna and steam room.

Grand Club: The Grand Hyatt Singapore Club is located on the 20th and 21st floors.  There is no elevator to 21, so you have to get off at 20 and walk up a set of stairs to the main portion of the club.  Just off the elevators is the Club concierge area as well as halls to rooms.  I am guessing the rooms on floors 20 and 21 are mostly the two floor suite units.  I can’t imagine a room on the 21st floor that was not accessible via elevator.

As I was staying at the Grand Hyatt Singapore on New Years Day, the Club was EXTREMELY packed.  They actually ran out of seating areas, and it is a large club.  A couple of guests were essentially turned away from the evening happy hour.  With that said, the staff were extremely accommodating (as much as they could be) and friendly. 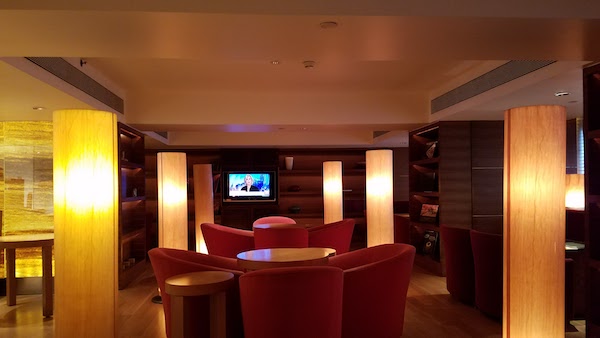 The breakfast had quite a few options; not a full buffet but a few hot choices.  The happy hour was similar and could have easily provided dinner.  During the day there were a few snacks and cold (non-alcoholic) beverages. 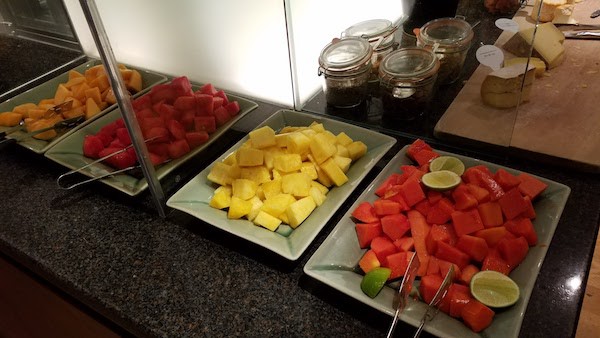 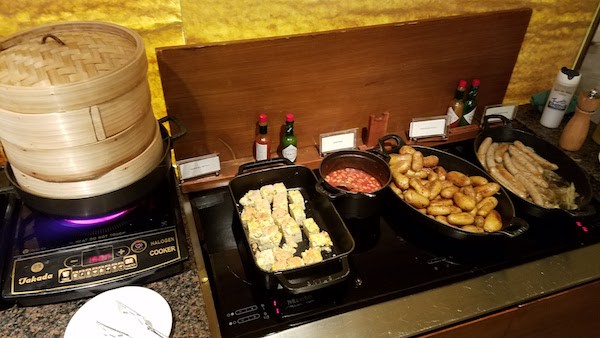 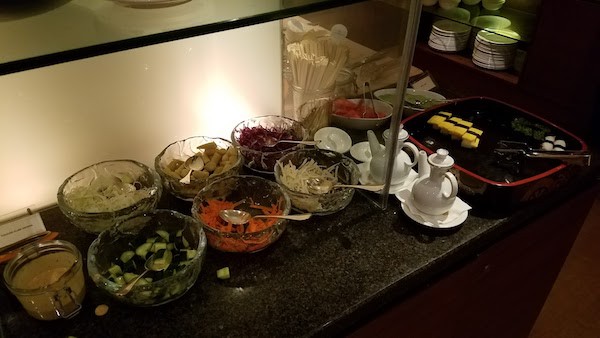 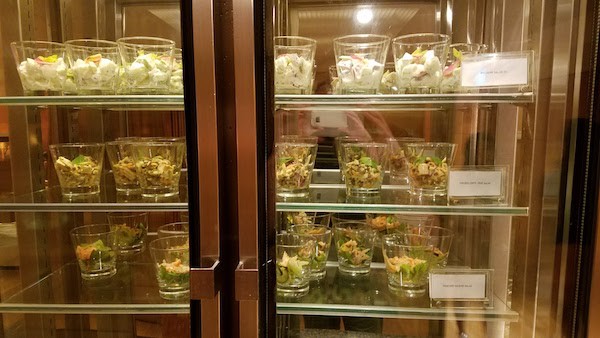 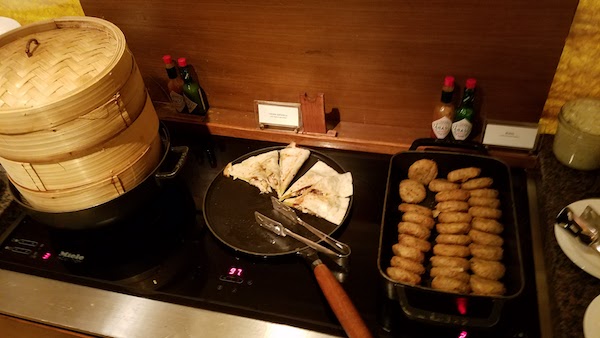 The staff were impressive.  One of the Club staff spoke multiple languages.  I heard him speaking German with a couple on top of English, Malay and Chinese (I think).

Straits Kitchen: There are two restaurants on site at the Grand Hyatt Singapore.  To be clear, breakfast for Diamonds is only complimentary in the Club.

For dinner my second (last) night I decided to make a reservation for Straits Kitchen.  It is known for having many local dishes to try (some more authentic than others I am sure).  It is a large buffet with a large price to match — over $50 USD per person.

Like most buffets I didn’t get my moneys worth.  However, it was fun to visit the various stations and try all the local cuisine.  The food was fresh and not left out like standard buffets.  Juices, coffee and tea were included, but no soda, wine or beer.

If you want to experience the dishes of Singapore, Straits Kitchen is an easy way to do it. 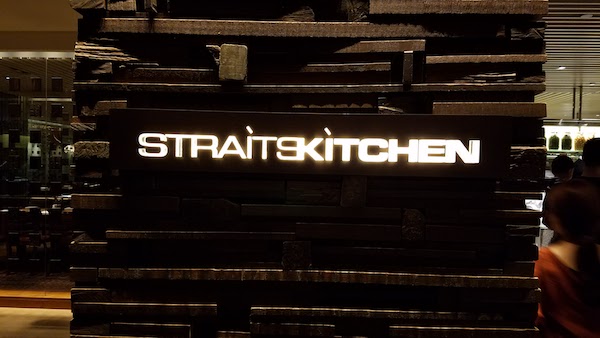 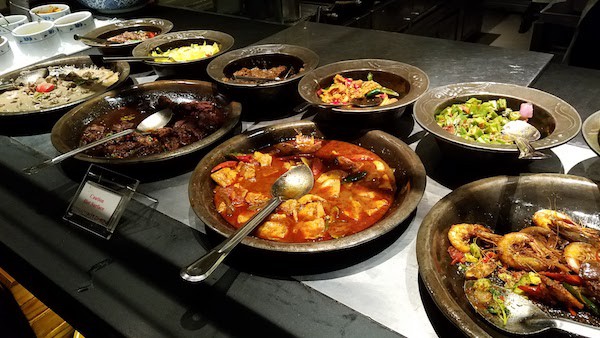 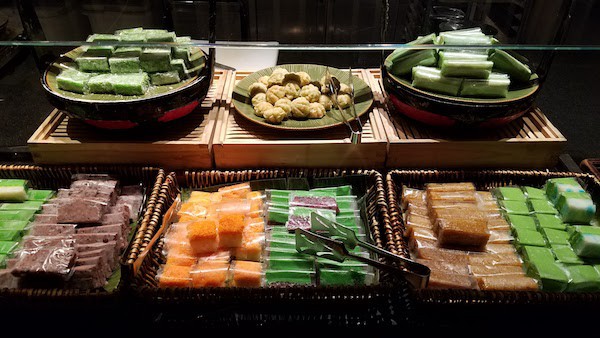 Overall: First the negatives.  The Grand Hyatt Singapore is an older property and its age is showing in the rooms.  The location is less than exciting to me.  The Club was crowded during my stay.  It is nearly impossible to use a Diamond Suite Upgrade.

With that said, I found the staff to be top notch.  There are plenty of options for eating and shopping just outside the doors.  The Club (if you can get a seat) is one of the better Clubs I’ve been to.  Access to the spa is a bonus.

If I were to go back to Singapore, I would probably stay closer to Marina Bay.  Orchard Road just doesn’t excite me.  If I had been blown away by the Grand Hyatt Singapore I would look past the location.