One thing I have noticed about Las Vegas hotels: Good hard product, terrible soft product.  Like so much of Vegas; hotels have a flashy, beautiful sheen but go beyond the surface and it loses it’s sheen.  Delano Las Vegas is a great looking property with service that disappoints. 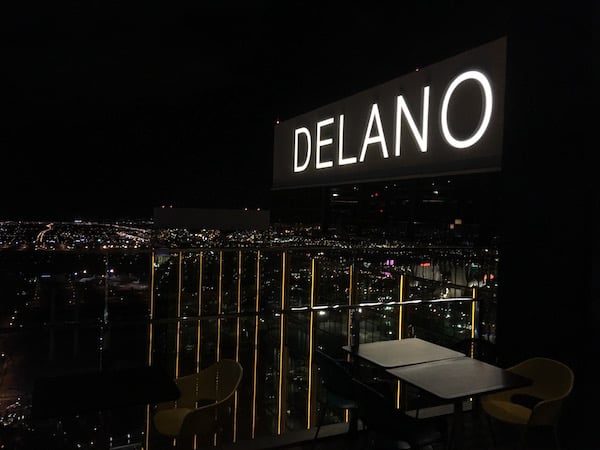 Location: First you should know that Delano is the former THEHotel at Mandalay Bay.  That means that it is at the south end of the Strip.  For example, when I wanted to get from the Bellagio to Delano Las Vegas, I had to take a tram, walk through two casinos, across an overpass, and another tram before walking through one more casino.  For some people, that might be a positive (away from the crowds and insanity of the center strip).

Check In: I was checking in on a Sunday afternoon so I didn’t expect too much a line.  In addition, most casino hotels offer a dedicated line for those with gaming loyalty program status.  There was a small line when I arrived so I looked for the “invited guest” line.  Not seeing one, I did notice a VIP Check In area to the left.   Other hotels have VIP Check In areas I’ve used, so I figured I would try to use this one. 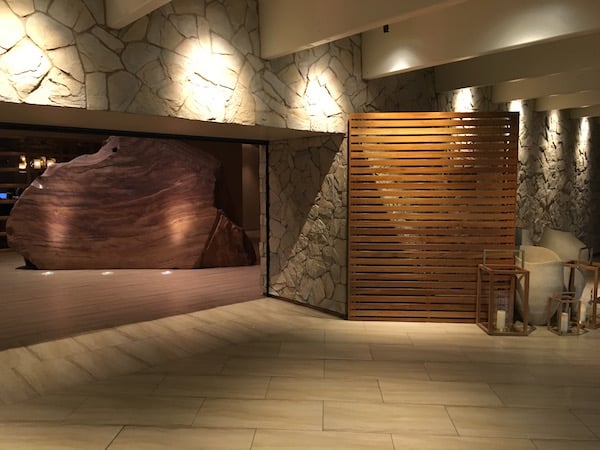 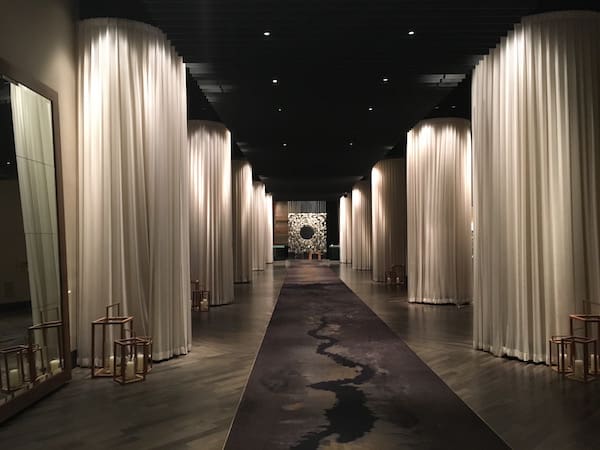 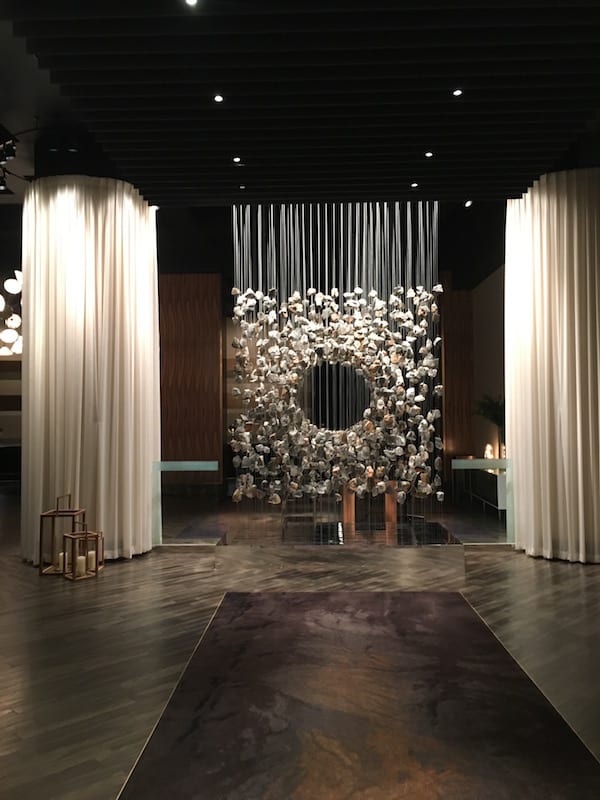 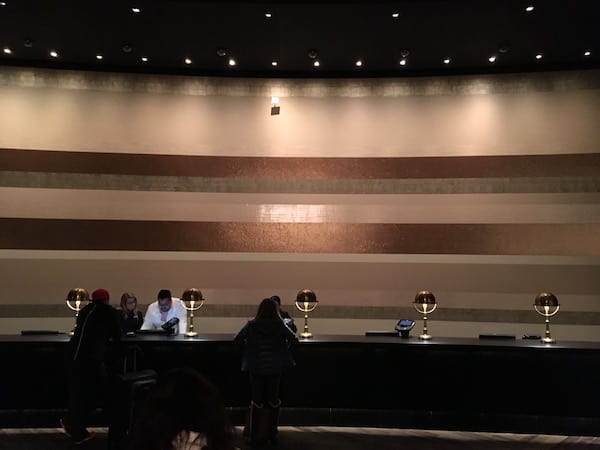 The desk agent told me that it was only for guests coded by their casino host could use the VIP lounge.  I was the only guest in there and there were three staff.  She reluctantly said she would look at my reservation.  My room, she explained, had two queen beds (usually an additional fee).  I said I would be fine with one King, and after a few seconds said there were no Kings available (while possible, on a Sunday night I have my doubts about that.  I think she just didn’t want to take the time to make the change).  She checked me in and handed me my keys and pointed me towards the elevator.  That was it.  No explanation of property amenities.  No instructions on using the wifi.  Nothing.  Later I would find out that she screwed up my check in more than I realized.

Room: The best thing that Delano has going for it is the room.  I had stayed at THEHotel (Delano Las Vegas before it was Delano) and thought the rooms were great then.  The updates (cosmetic) make the room even more desirable.  Note that Mandalay Bay is also updating their rooms. 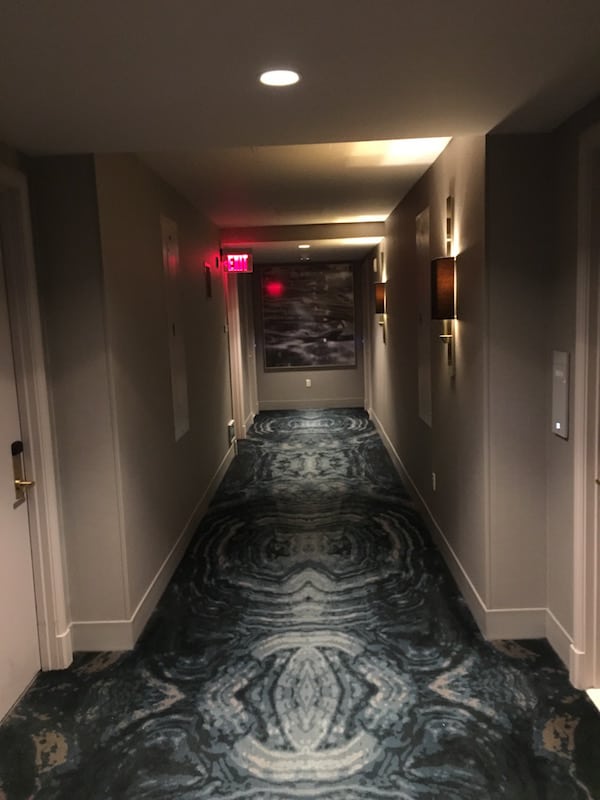 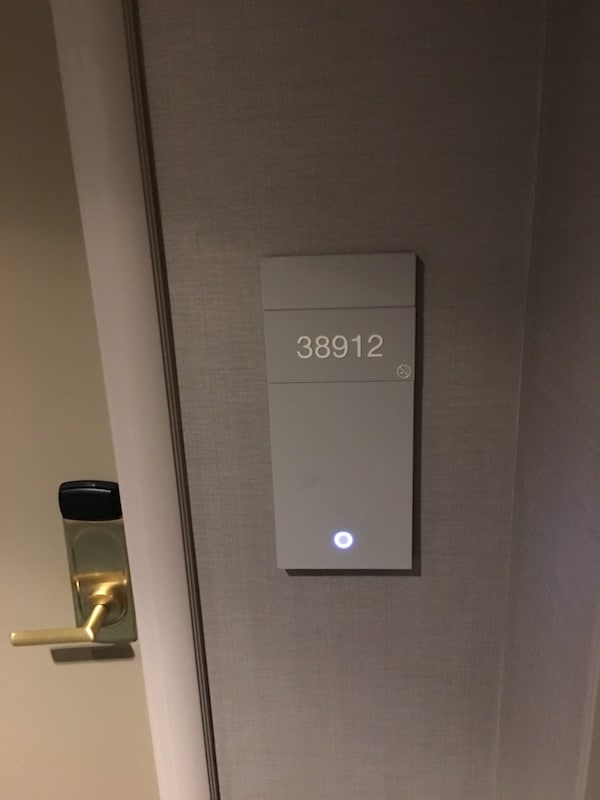 The decor of the rooms and hotel is midcentury modern with clean whites and baby blue accents.  There are a few gold and black finishes on the furniture.  All the furnishings are lightweight (almost flimsy), but as of my stay were not showing signs of wear and tear so that’s a bonus. 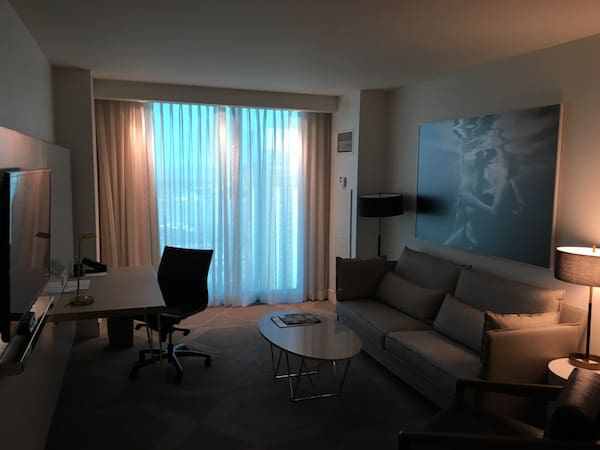 The layout of the room is a true one bedroom suite.  When you first walk in there is a half bath (toilet and sink).  Down a short hall you come to the living room.  Wall mounted TV, couch, leather chair and coffee table.  There is a desk against the wall and floor to ceiling windows.  There is a small wet bar nook with coffee maker, small sink and fridge that is full of for sale items; no room for your dinner leftovers. 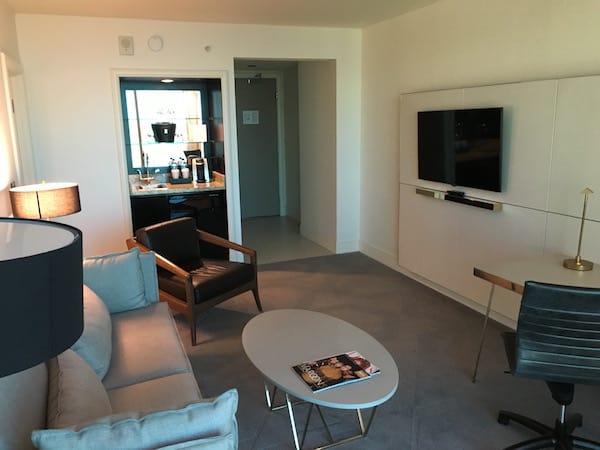 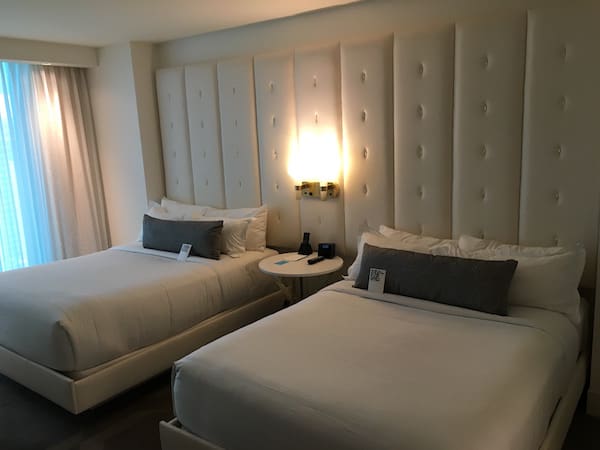 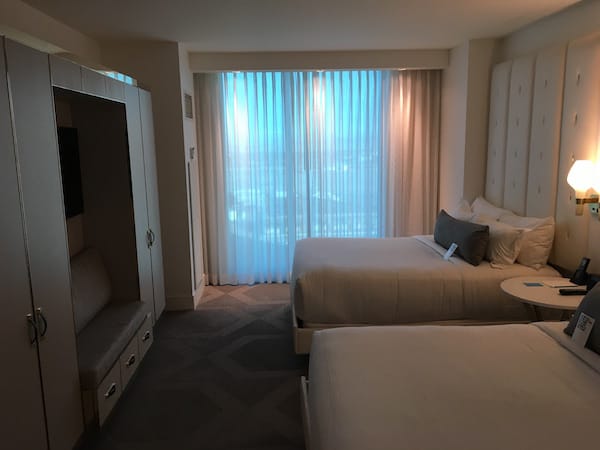 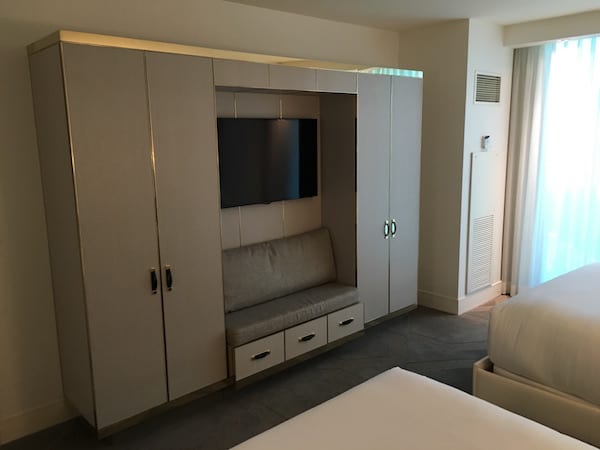 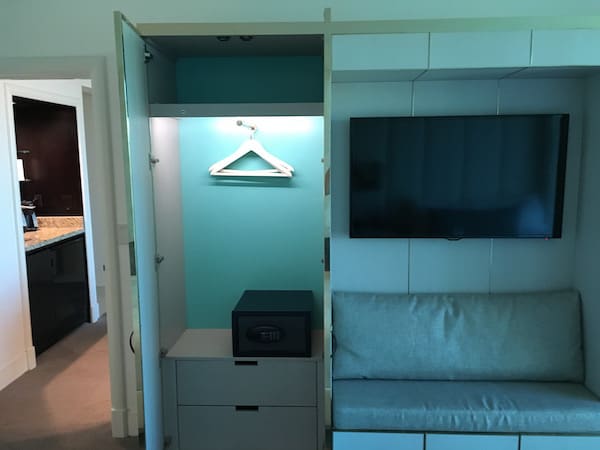 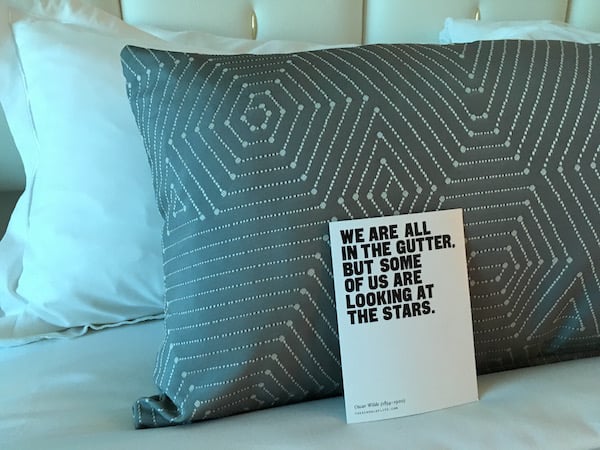 My room was on the 38th floor, the top floor of standard rooms.  The Delano Las Vegas claims to be 60+ stories.  In fact it is just over 40 as the elevators skip from 38 to 60.  I actually had a “strip view” room I believe.  I looked out at the airport and could see down the strip if I looked at an angle.  The only problem was I could hear airplanes taking off but it was not loud and actually kind of enjoyable. 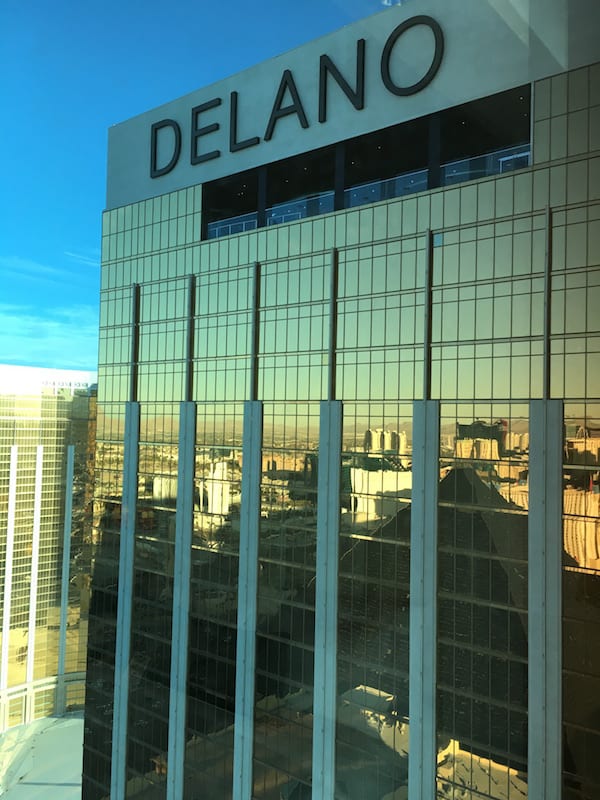 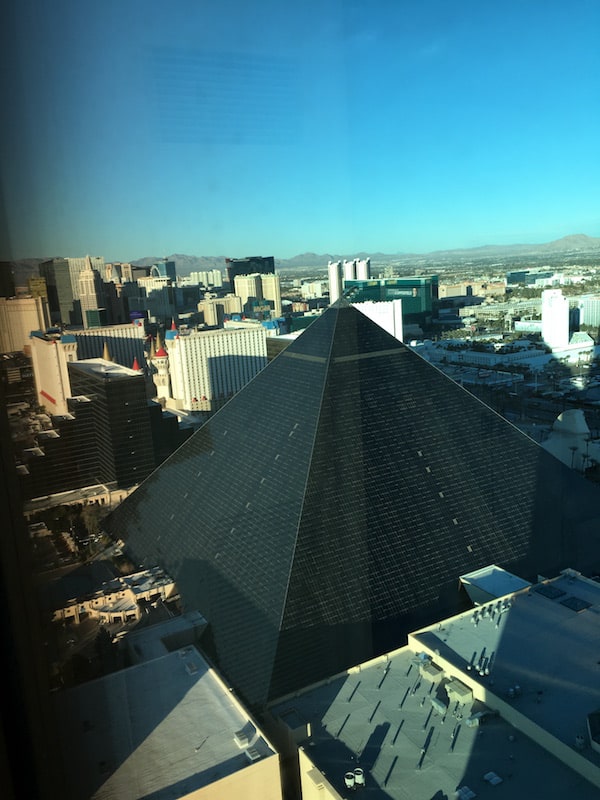 Bathroom: There are two bathrooms in the room: the half bath washroom off the living room/entrance and the full bath off the bedroom.  The small bathroom is just a toilet and sink. 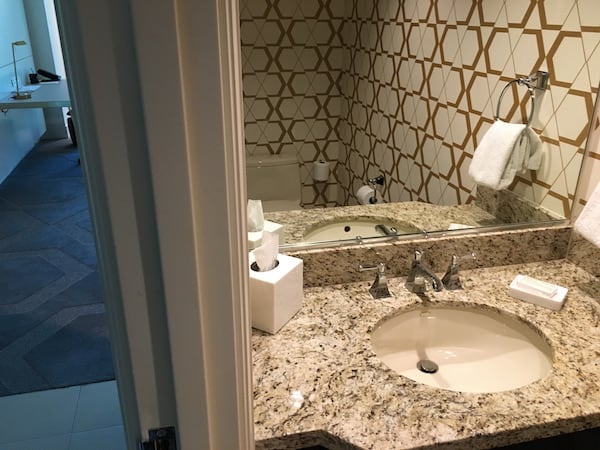 The full bathroom has a glass enclosed shower next to a huge soaking tub.  Double vanity with plenty of storage and towels.  Small wall mounted TV (yes, three TVs total if you are keeping score). Separate toilet with dark wall paper. 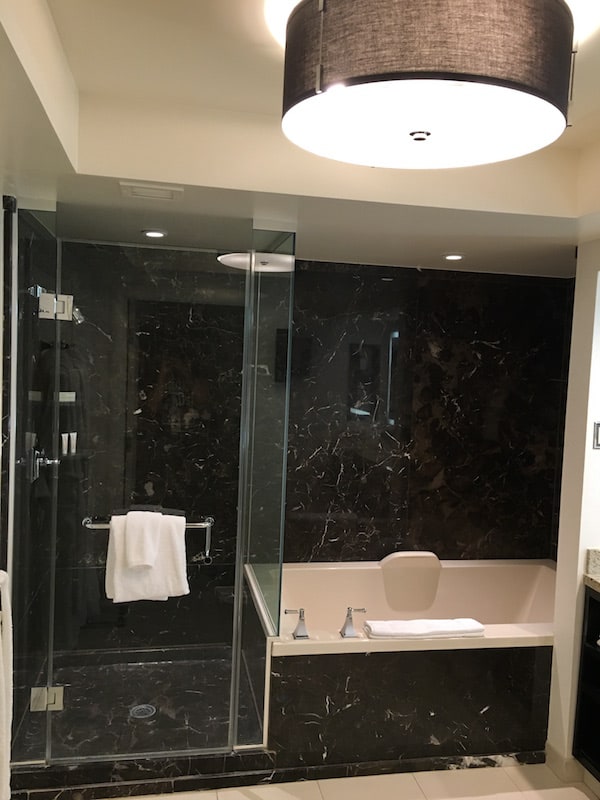 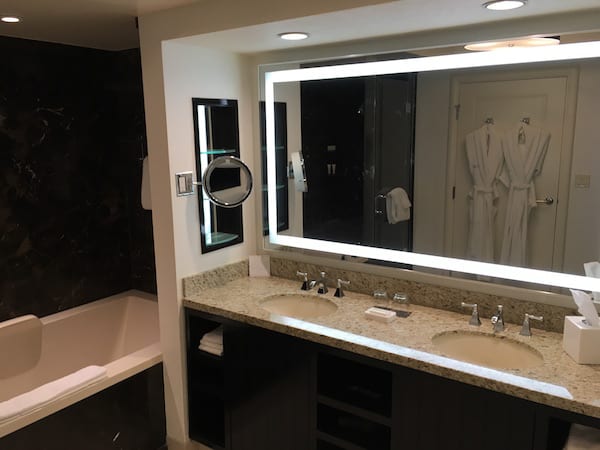 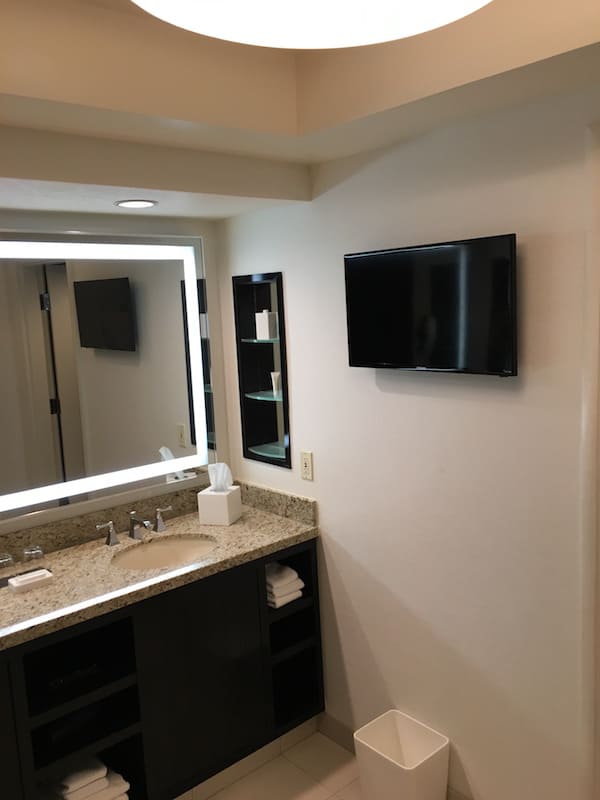 The bath products were some of the best I have seen in a hotel.  (MALIN + GOETZ) is a high end product line that is independent, well made, and smells good!  I hope that these aren’t the first to go when it comes time to cut costs. 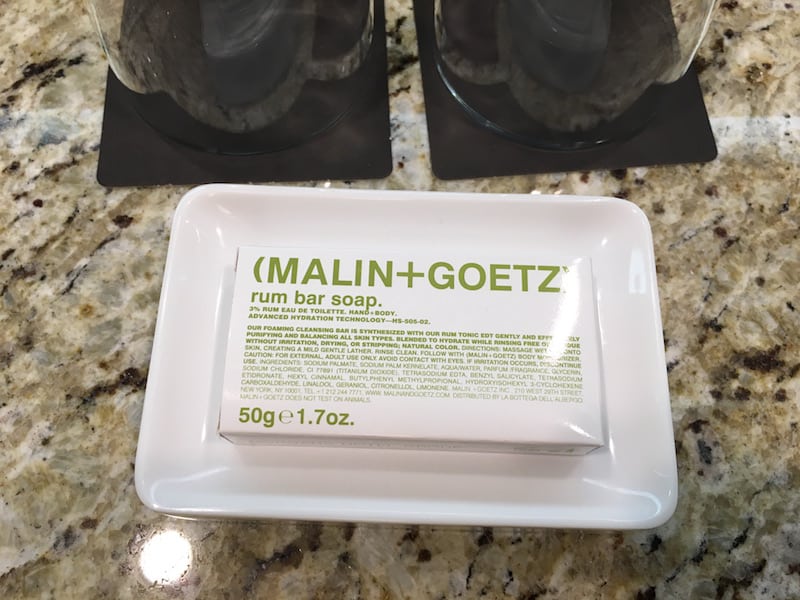 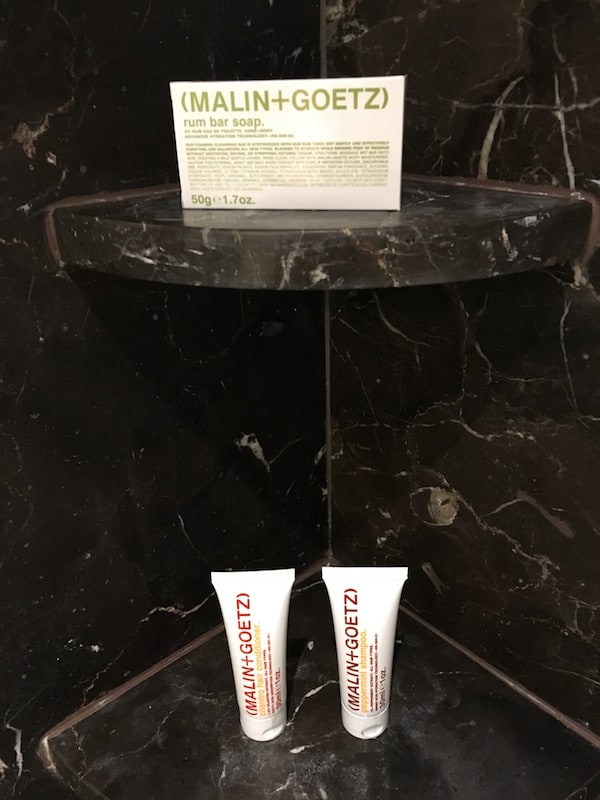 Pool/Spa: Delano has it’s own section of the sprawling Mandalay Bay pool complex.  It being December, I didn’t get down to the pool however I have visited the Mandalay Bay pool on previous occasions.  It is a hugely crowded mess but a lot of fun if you like pools.  Having a pool designated just for Delano guests is welcomed.

There is also a Spa on the second floor that is just for Delano (Mandalay Bay has their own).  I didn’t get a chance to visit but I did look it up.  Prices were similar to any of the upscale Vegas resorts.  Guests of Delano can purchase a day pass to use the facilities for $25.  I considered doing this but reviews online say that the spa is dated and needs some refurbishment.

Service: I have come to expect poor service in Vegas.  I don’t know what it is, but I rarely get good service when visiting Sin City.  Most of the time it seems like the staff have had little to no training.  Maybe there is high turnover.  Maybe there just isn’t investment in their staff.  Maybe the customers don’t demand high quality service.

Delano Las Vegas had terrible service from the moment I walked in (see “Check In” above).

In my room I quickly found out that none of the plumbing was draining.  Showering meant I was standing in 2 inches of water.  I called down to the front desk and was promised that someone would be up to take care of it.  I also asked for some extra hand lotion (Vegas is dry, and as I said, I love the products they use).  I left the room and went up to the top floor ultra lounge, Skyfall Lounge.  While I won’t review the lounge, I will say it has the best views I’ve found in Vegas (check out the bathroom stall for a great view while doing your business).

I will say that the lounge service was also bad.  I asked to be seated on the outside patio but they said it was closed due to wind (in reality I think it was closed because it was a Sunday night).  When I was seated by a window I looked out and there were three separate groups on the patio.  I asked the host why they were out there if it was closed.  She told me that they purchased expensive cigars downstairs so they made an exception.  Wow.

Table service as also lacking.  I asked twice for water (first when I sat down, again when I ordered my drink).  Third time she brought me a glass.  When I finished I asked to charge to my room, which is what I always do at Mlife resorts and have never had a problem with.  The waitress said it didn’t work and I would need to call the front desk.  I chalked it up to an error at check in.  When I asked to use their house phone she said I should use my cell phone.  Hmmm.  After being hung up on twice I went to the lounge host and had her call down.  She was able to take care of it for me.  So 10 minutes later I was finally able to charge the bill to my room.  The waitress never once apologized for the inconvenience or went out of her way to try to help resolve it.

After the drink I went back to my room.  The good news was that facilities had come to fix the plumbing issue.  The bad news was that they left dirty foot prints on the towels and left behind their dirty rags.  Also, no hand lotion has been brought up. 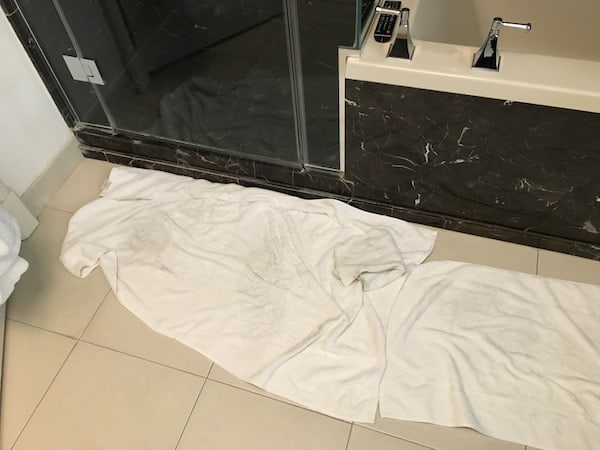 I called down again and asked that housekeeping come up to freshen up after the plumbers.  When I got back from dinner the room was clean.

Check out the next day was more of the same.  I was supposed to have a $75 food and beverage credit that didn’t show up on my bill.  So off I went to the front desk.  The agent pulled up my account and had to manually subtract the F&B.  For one of the quick service restaurants she asked me who had served me.  I said he was the guy at the cash register; I didn’t catch his name.  “Well, I know it was some guy…” she curtly replied.  Okay then.

Wifi: Unfortunately the wifi was so slow it was nearly unusable.

Overall: While I probably come off as a huge first world complainer, I do have to say I expect good service.  Great service is wonderful and a bonus.  However, bad service in the service industry is inexcusable to me.  It is their job.  If it is one off then I blame the individual for a bad day.  However, when it is everyone I encounter, clearly there is a bigger problem higher up.

The hard product is fantastic.  I would love to stay at Delano Las Vegas again.  I wish it were closer to the heart of the strip, but the great rooms make up for that fact.

My prediction is that unless they can get their act together with staffing, Delano Las Vegas will go the way of other attempts at trendy hotels in Vegas and be a footnote in the history of resorts.  It’s too bad, I think they could really have something with this property.

Delano is a brand that is going for the millennials.  Delano South Beach looks amazing and has a good reputation.  There are plans to open three new Delano properties throughout the world.  I hope that Delano (and their parent Morgans Hotel Group) realize that if the Vegas property wants to keep the name, it is going to have to step up its game.