Recently I wrote about my plan to achieve Platinum status with American Airlines through their LinkedIn challenge.  Unfortunately for me I ran into problems achieving American Platinum status; some of the problems were caused by me while others were not.  The verdict is still out as to whether or not I will get Platinum. 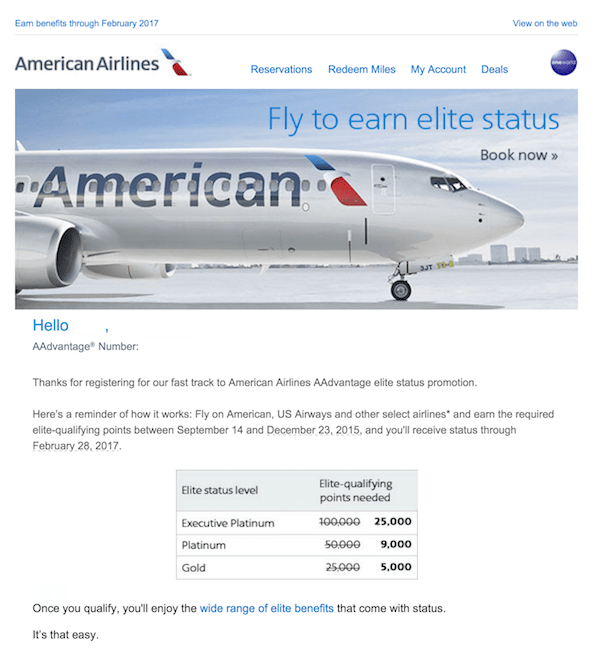 I found an amazing deal via FlyerTalk where I could fly round trip DEN-JFK via LAX in First; including Flagship First for the LAX-JFK-LAX portions.  The price was under $500, decent for DEN-JFK in First, but a steal considering I was able to route it via LAX to take Flagship First.  I was able to use Citi ThankYou Points to pay for the flight (TY Points are worth 1.6 cents each when redeeming for a ticket on AA).  The nice thing about booking through Citi ThankYou is you still earn miles since the ticket is processed as if it is purchased with cash and not paid for via miles.

The entire DEN-LAX-JFK-LAX-DEN was enough to get me over 9,000 AA Elite Qualifying Points, the number I needed for Platinum status.

Silly me, however, decided to drop the last leg and instead fly home to SEA from LAX.  Knowing this would put me at 300 miles short of Platinum, I credited my SEA-DEN positioning flight Alaska to my AA mileage.

When all flights were done and my status only said Gold, I called in.  The customer service rep for AA explained that I was still 300 miles short because even though Alaska flights usually count towards status, for this promotion they did not!

I read the fine print on the offer, and sure enough:

So I was faced with a decision; give up on Platinum or book an extra mileage run?  Or, my third option:

Rebook my Alaska flight to Vegas on American

I had purchased an Alaska flight to Vegas during a Fast Dash sale.  I could cancel one of the legs and rebook on American.  So that’s what I did.  I canceled my SEA-LAS flight (I am Alaska MVP Gold which means I am not charged a cancelation fee) and rebooked with 8,000 Citi ThankYou points.  I was to fly AA SEA-PHX-LAS.  A bit more time, but it would guarantee me making Platinum on AA.  But of course my problems achieving American Platinum status would continue.

I got to the airport, checked in, visited the Alaska Board Room (via my Priority Pass Select from Citi Prestige) and headed to my gate.  I boarded the old US Airways A320 plane.  We taxied to the runway.  And then stopped.  And taxied back to the gate.  My connection in PHX was tight; 1 hour, 28 minutes.  I knew a delay would cause me to miss my connection to LAS, the last PHX-LAS flight of the night.  Not wanting to spend a night in PHX, I did the only rational thing anyone could do.  I got off the plane!

The AA staff were very friendly and helpful (kudos to them) and got me booked on an Alaska direct flight SEA-LAS.  Yep, you guessed it, the Alaska flight I was originally booked on!

In the end it worked out better; I was able to get to LAS with a direct flight on Alaska that got in sooner to Vegas and ended up using points to purchase the ticket so was able to save some money.

Now my only question is whether or not American Airlines will count my Elite Qualifying Points from my originally booked flight on American.  If not, I will end the status challenge 300 points short of Platinum.  Did my problems achieving American Platinum status turn me off of American Airlines?  Perhaps a bit, but more than anything it reaffirmed my loyalty to Alaska Airlines.  Chasing status is fun, but when I’ve got a good thing, it may be better not to mess with it.

UPDATE: I called in and spoke with an AAdvantage rep.  Sure enough, none of my flights posted.  She was able to pull up my original ticket and was able to confirm the delayed flight.  She gave me credit for my original itinerary and I am now Platinum!