While I have flown Cathay Pacific First Class a number of times, for my flight to Tel Aviv I would be trying out their Business Class on the A350.  The A350 aircraft do not have a First Class.  The cost was 30,000 Alaska Airlines miles + $57.20 in taxes and fees for the one way ticket.  I find this to be an incredible deal and sweet spot in the Alaska Airlines mileage redemption.  The flight is nearly 12 hours in length and typically costs $4,000+.  As a comparison, a one-way First Class ticket to Hawaii from Seattle costs a minimum of 40,000 miles and is half the distance (and impossible to compare in service).

After an evening visit to Hong Kong Disneyland, I was off to the airport.  I made a visit to The Deck lounge before the 1:10am flight. 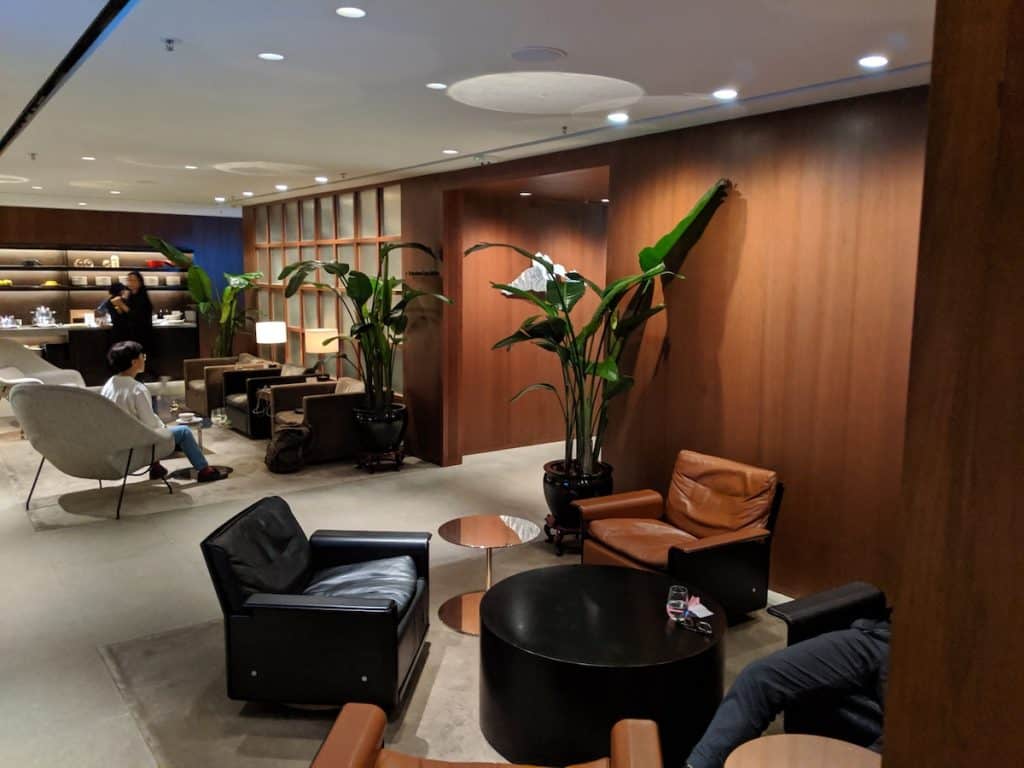 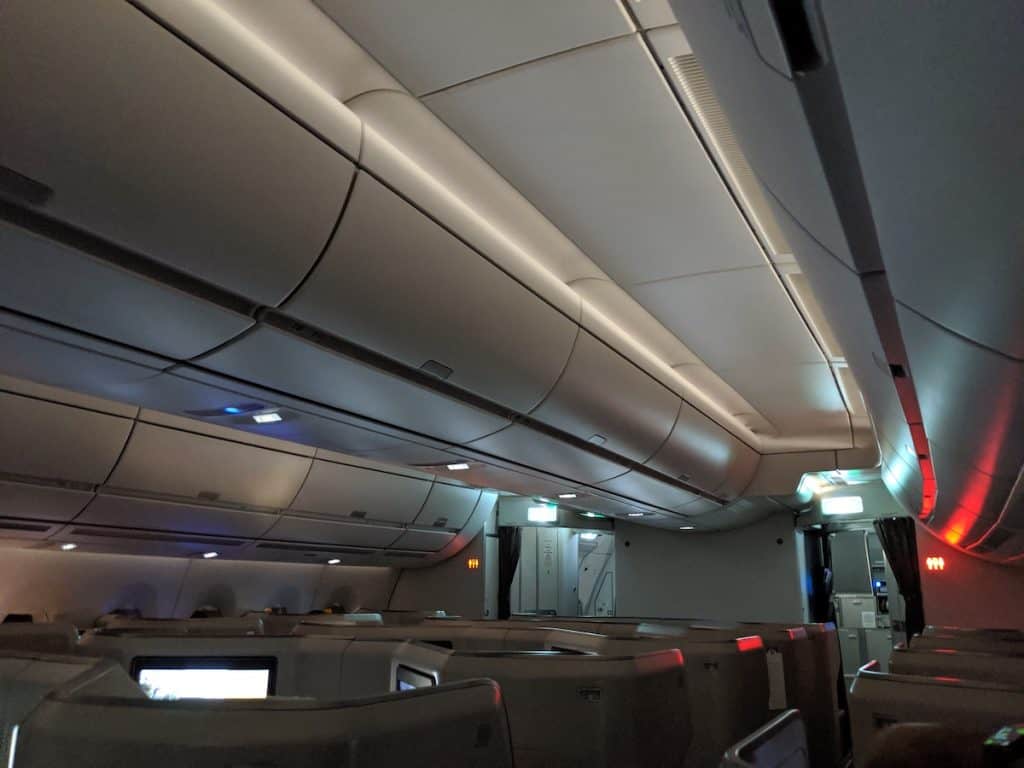 I selected seat 17K, a window seat mid cabin.  Most of the center seats were empty for the flight. 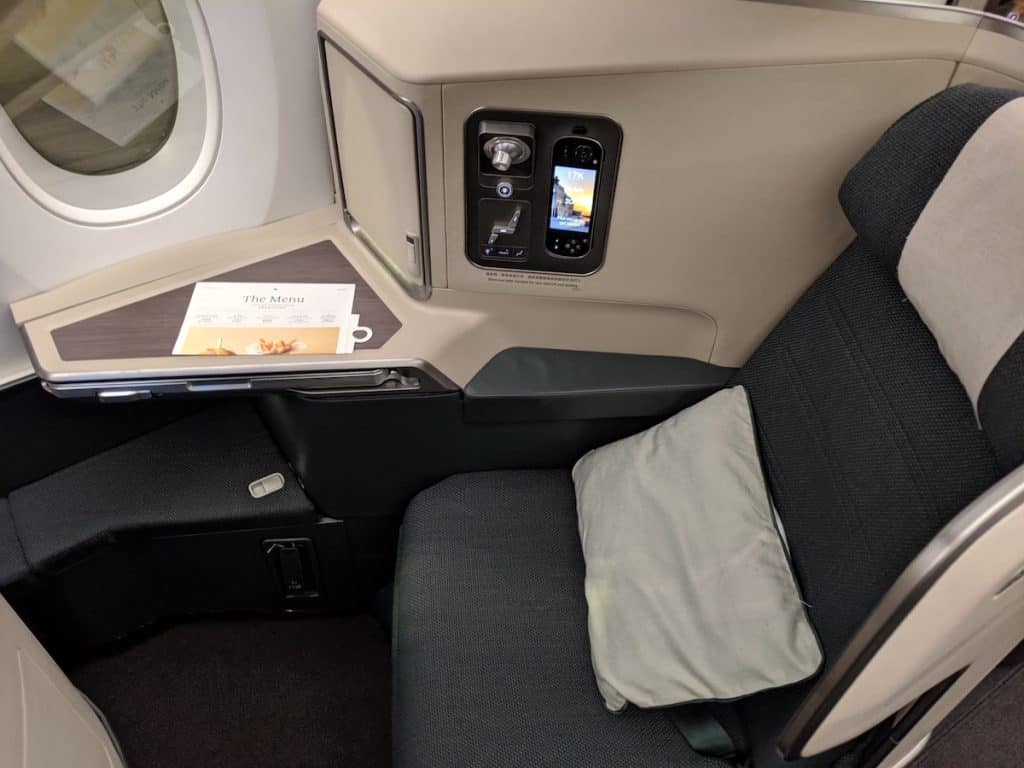 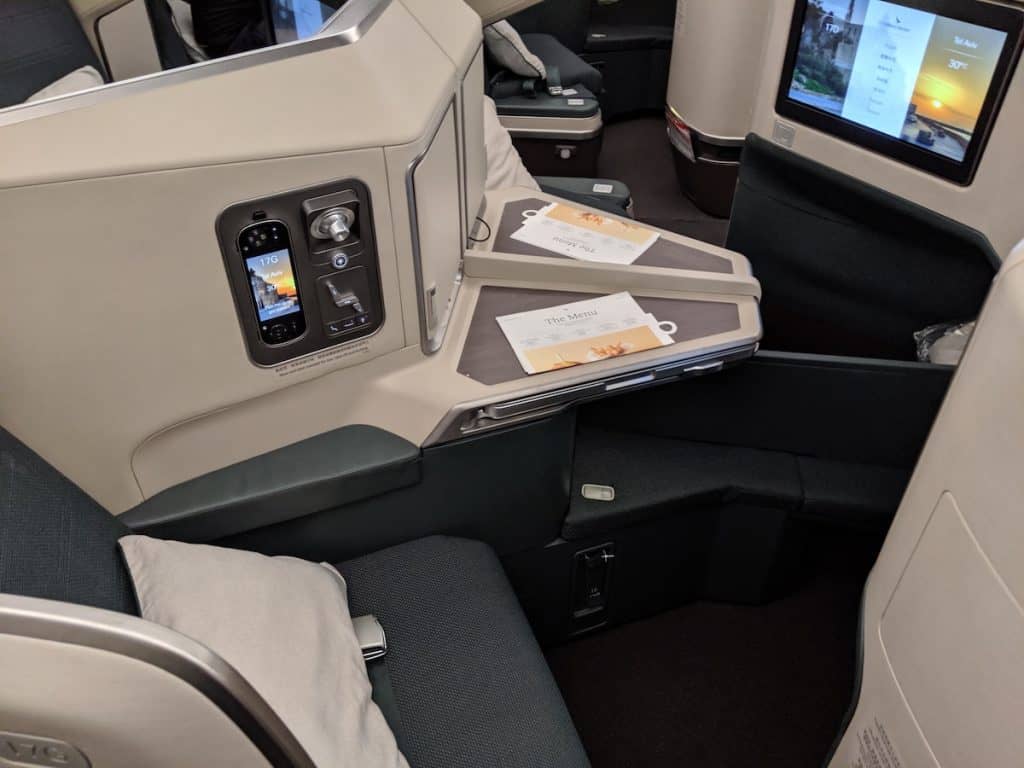 The seats are similar to other airlines that fly a 1x2x1 reverse herringbone, including China Airlines.  They can be adjusted to a lie flat position for sleeping. 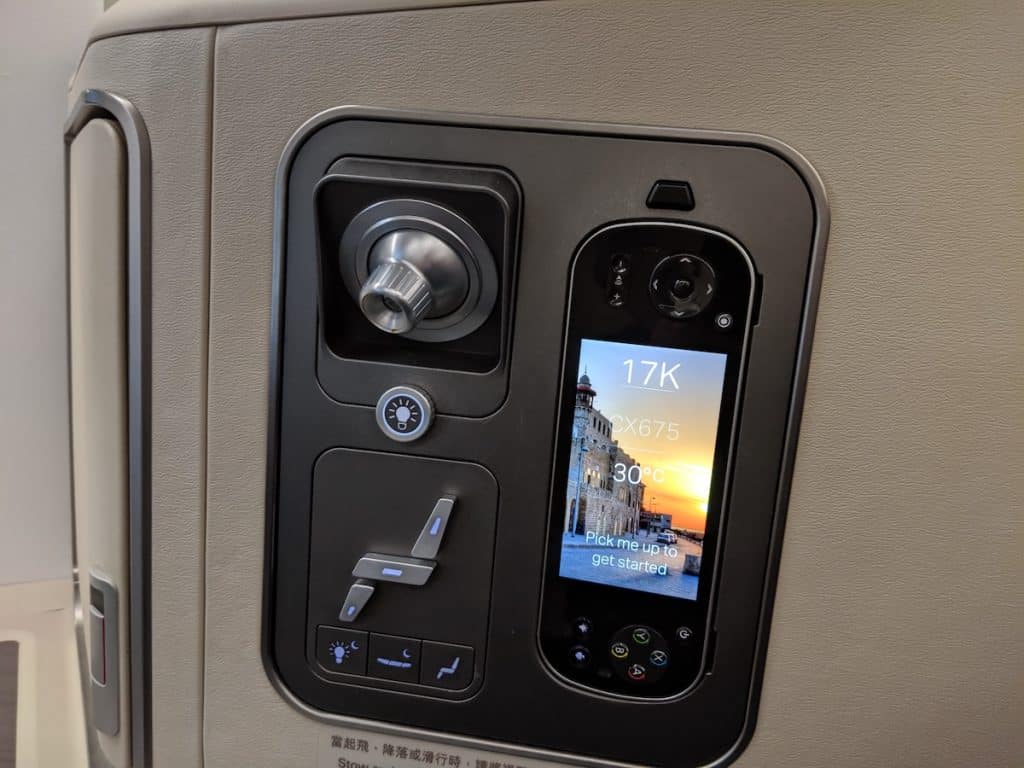 A touch screen remote offers info during the flight including flight time remaining and temperature at destination.

Additionally behind the control set is a small locker where you will find the outlet and headphone jack.  A water bottle, amenity kit, and headphones were in the locker when I arrived at my seat. 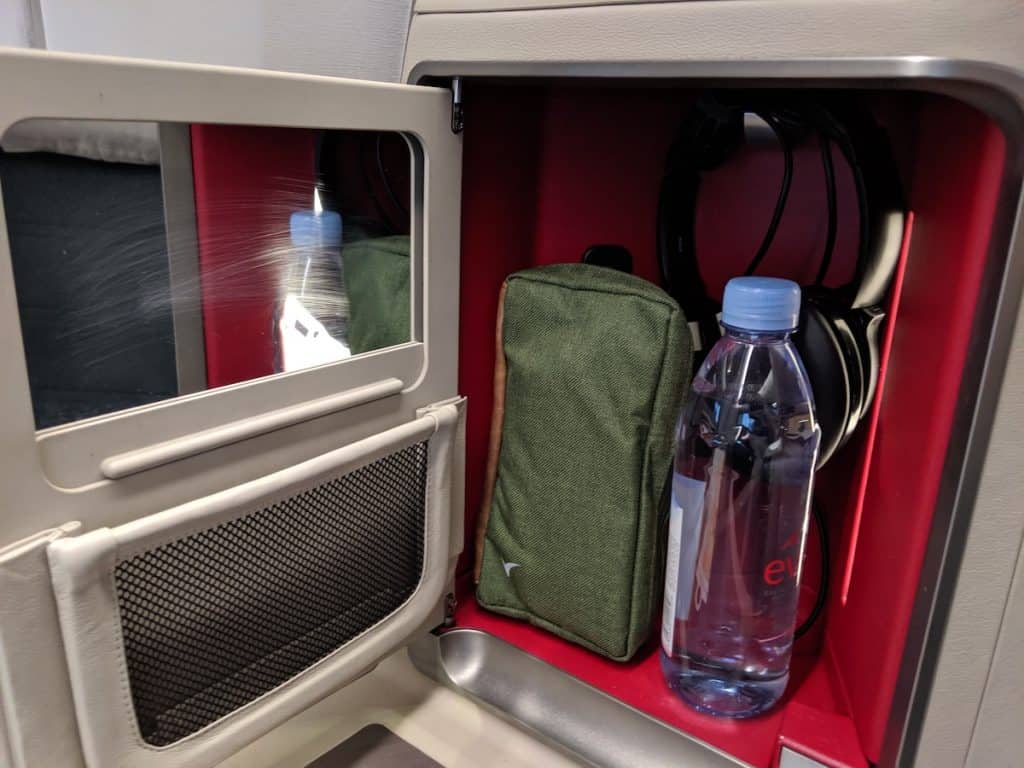 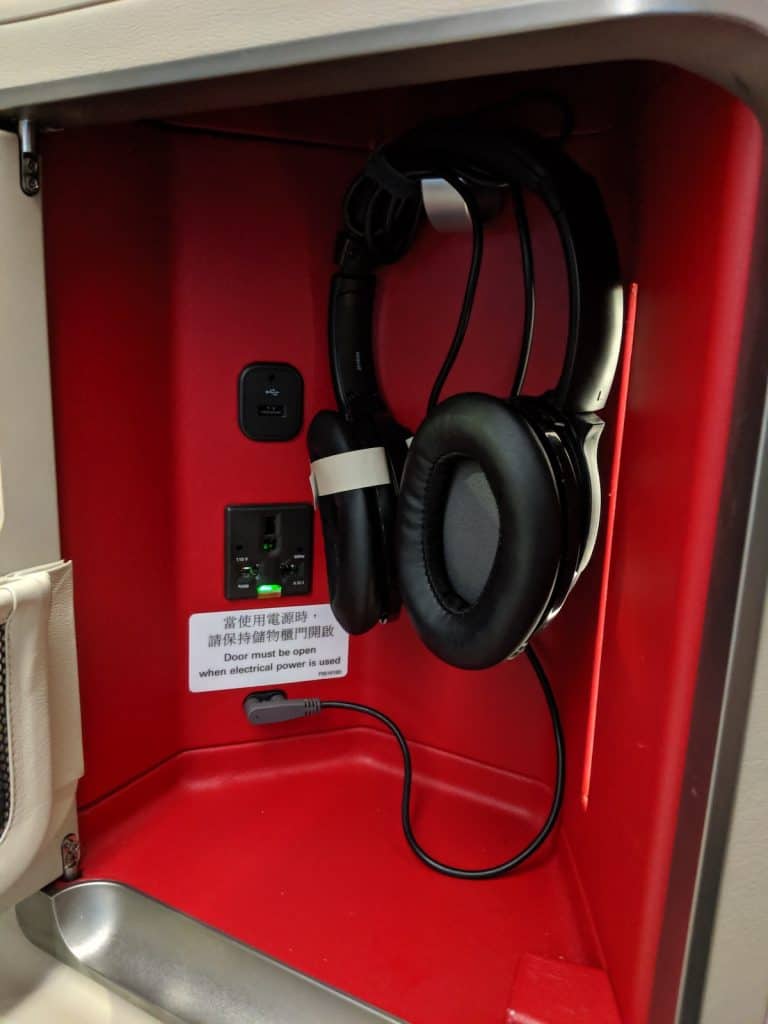 Additional storage is under the padded shelf. 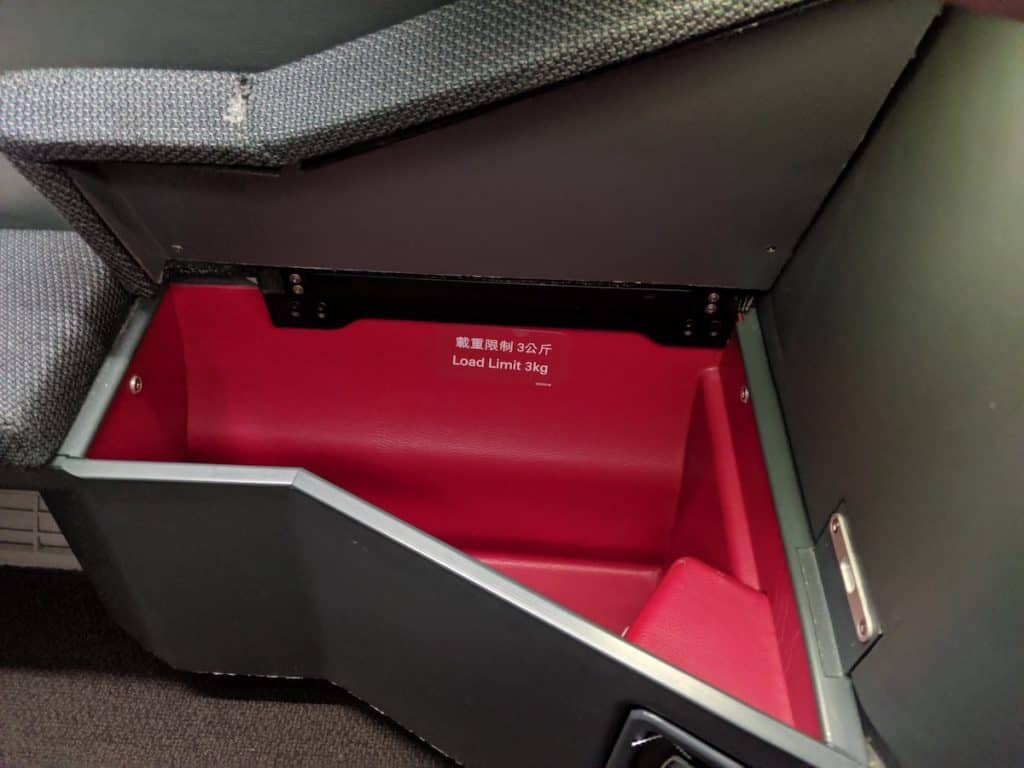 The inflight entertainment screen is installed at an angle which makes it difficult to watch when it needs to be latched for take off and landing.

On each seat was a pillow and duvet in addition to the amenity kit.  Inside the canvas and faux leather kit was standard eye mask, toothbrush and toothpaste, mouthwash, ear plugs, lip balm & creams by Jurlique, and non-slip socks.  I’ve never been a fan of Cathay Pacific amenity kit designs (First Class is basically a fabric box). 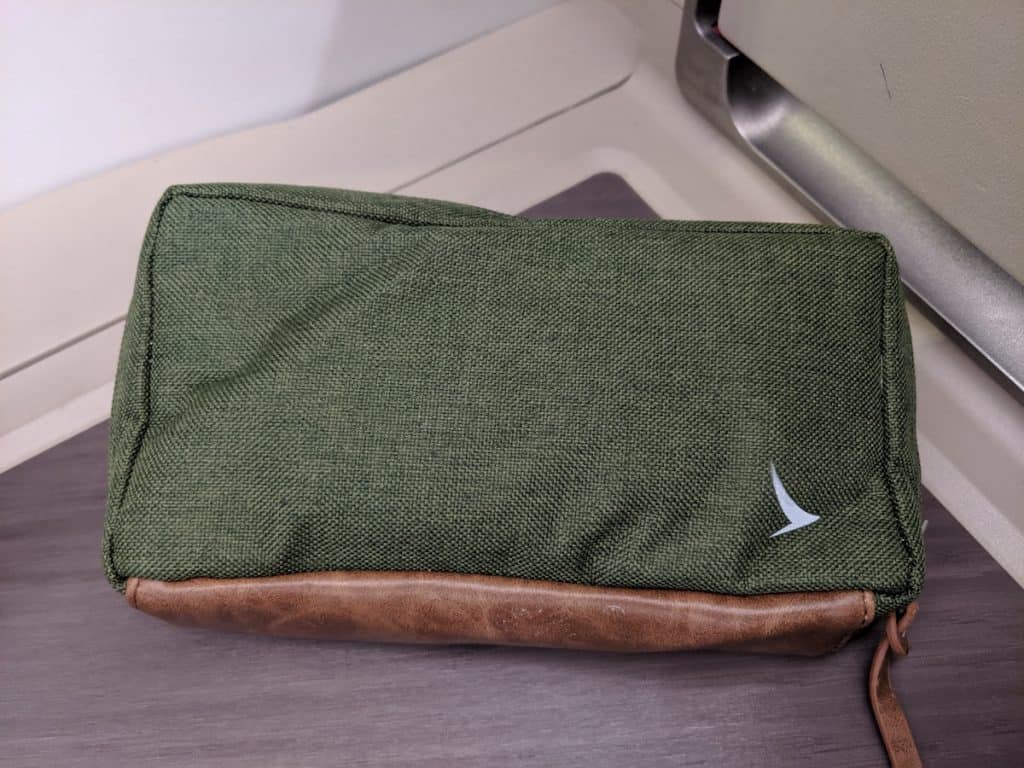 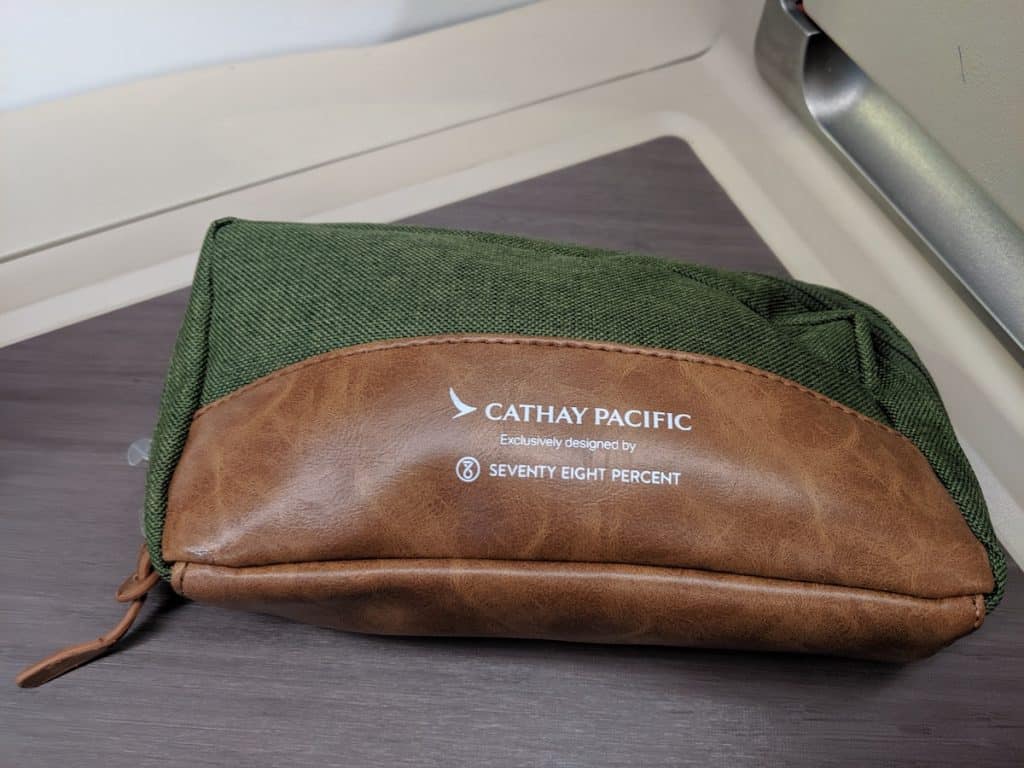 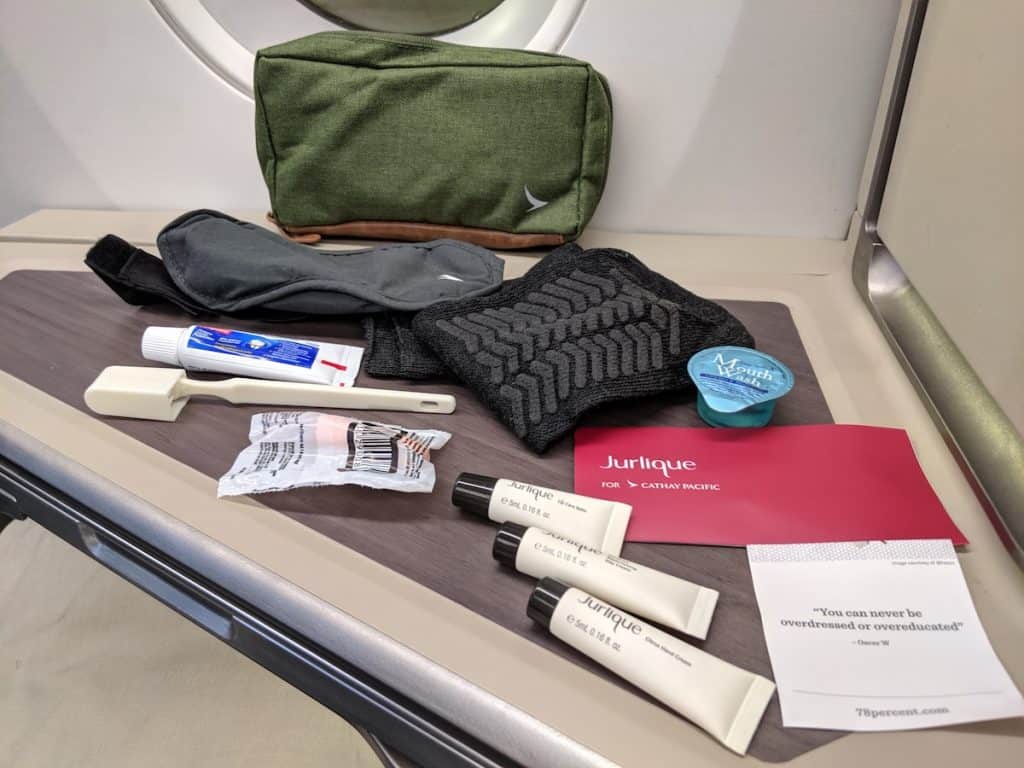 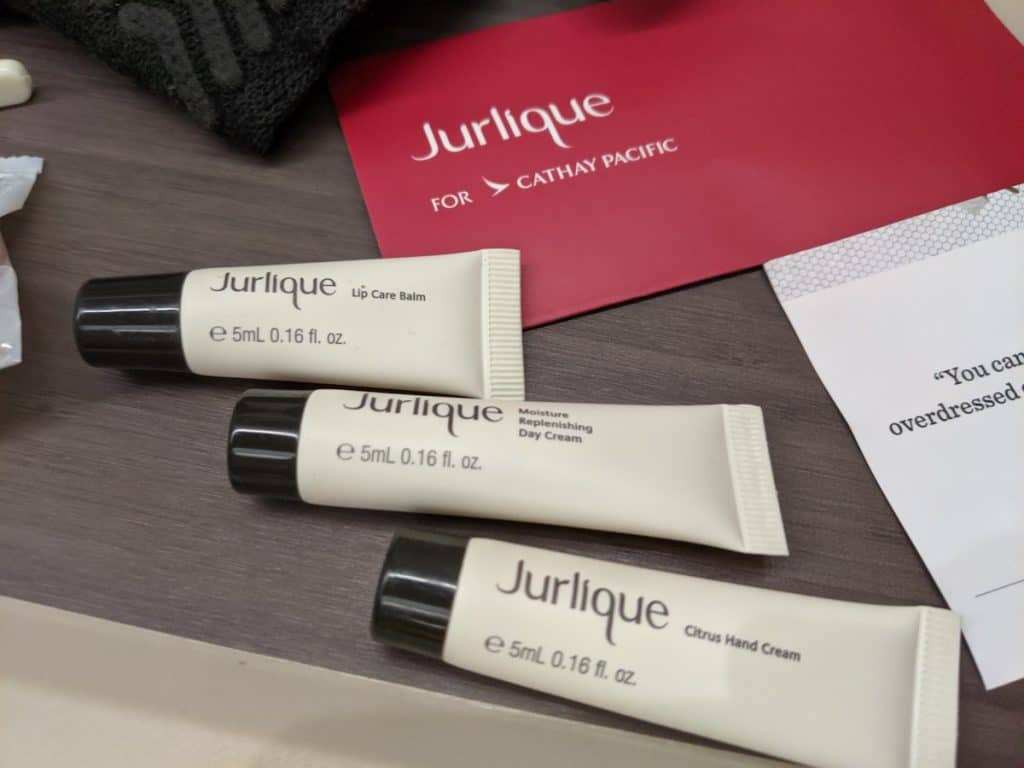 Dinner and breakfast were served, with snacks available throughout the flight. 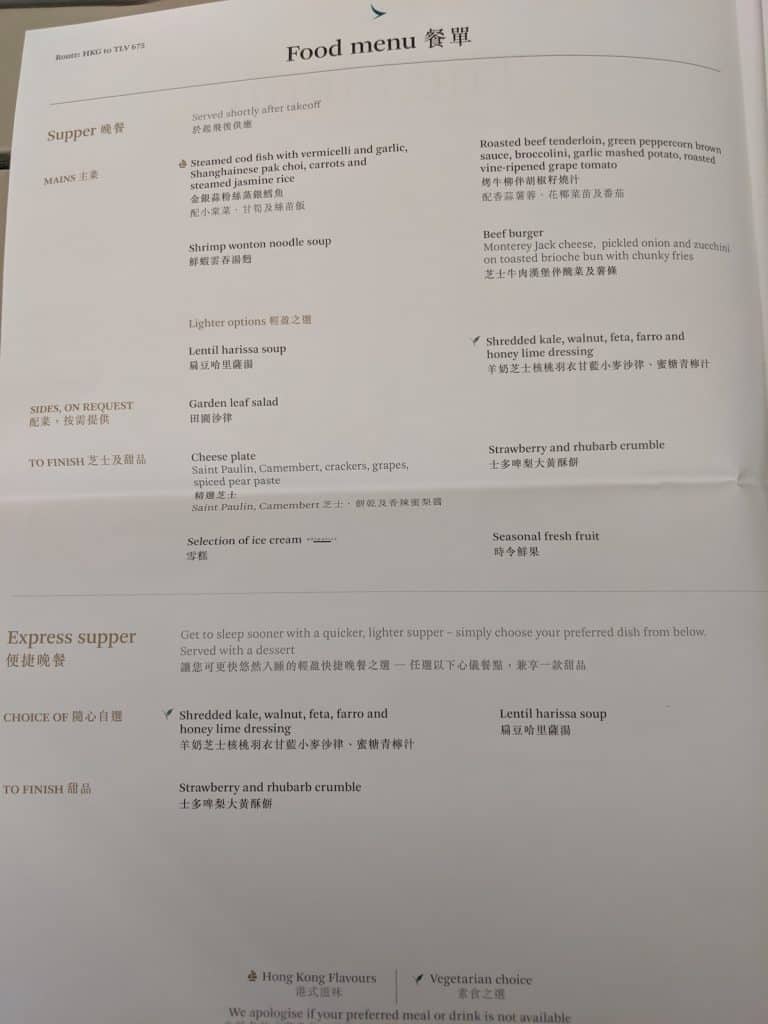 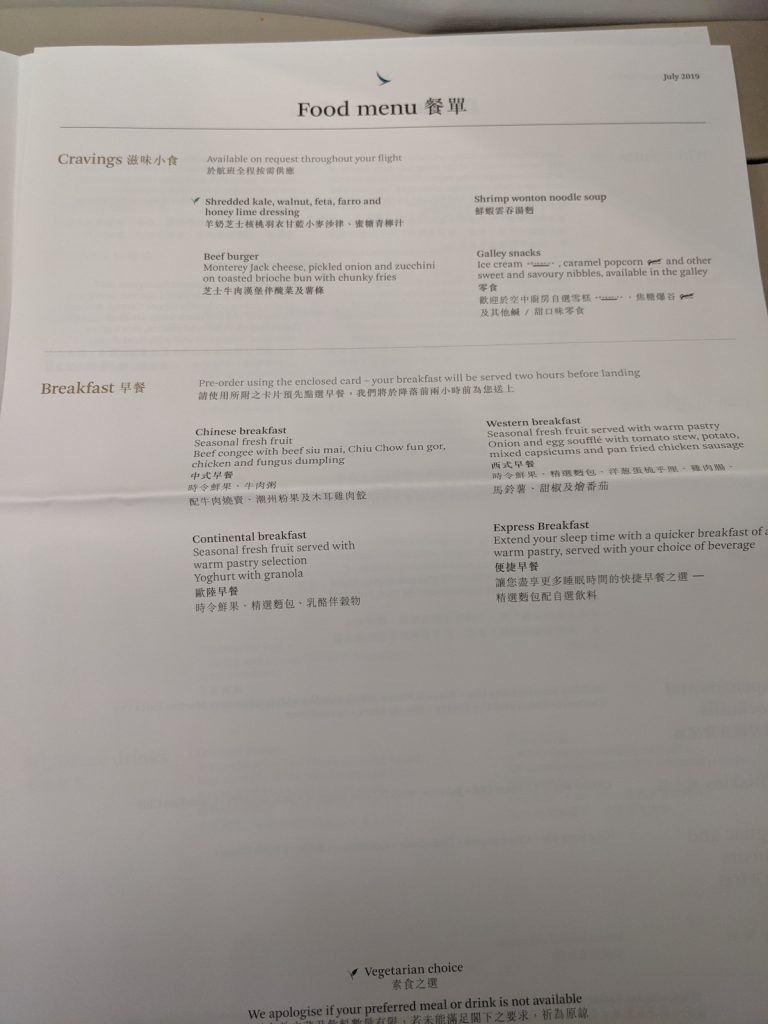 For dinner I had the hamburger which was served quickly to allow for greater sleep time.  I was also served a side salad but no bread was offered (not sure why they had a bread plate and butter). 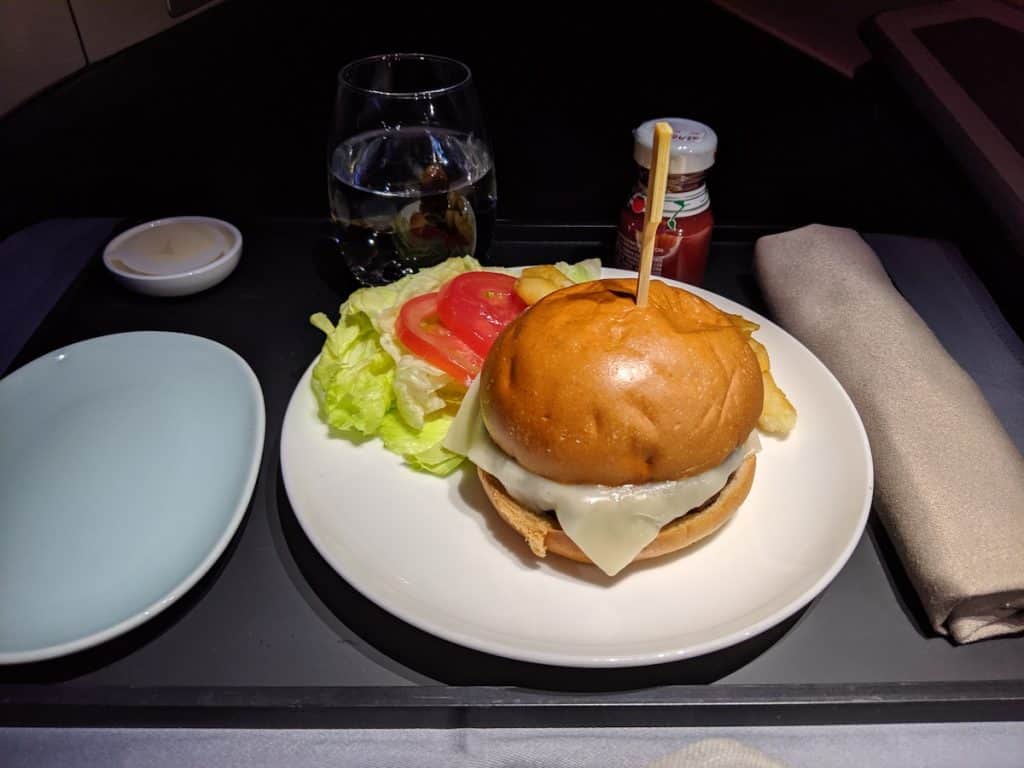 Breakfast could be pre-ordered as to also allow for more sleep. 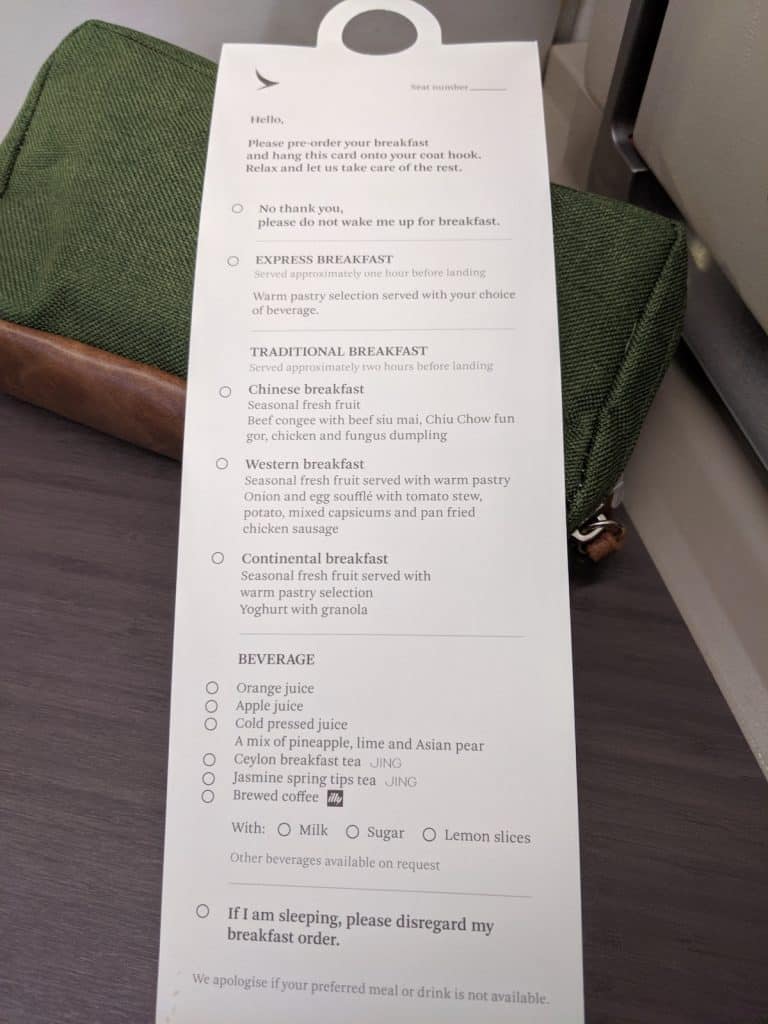 I went with the Western breakfast with lots of liquids to rehydrate. 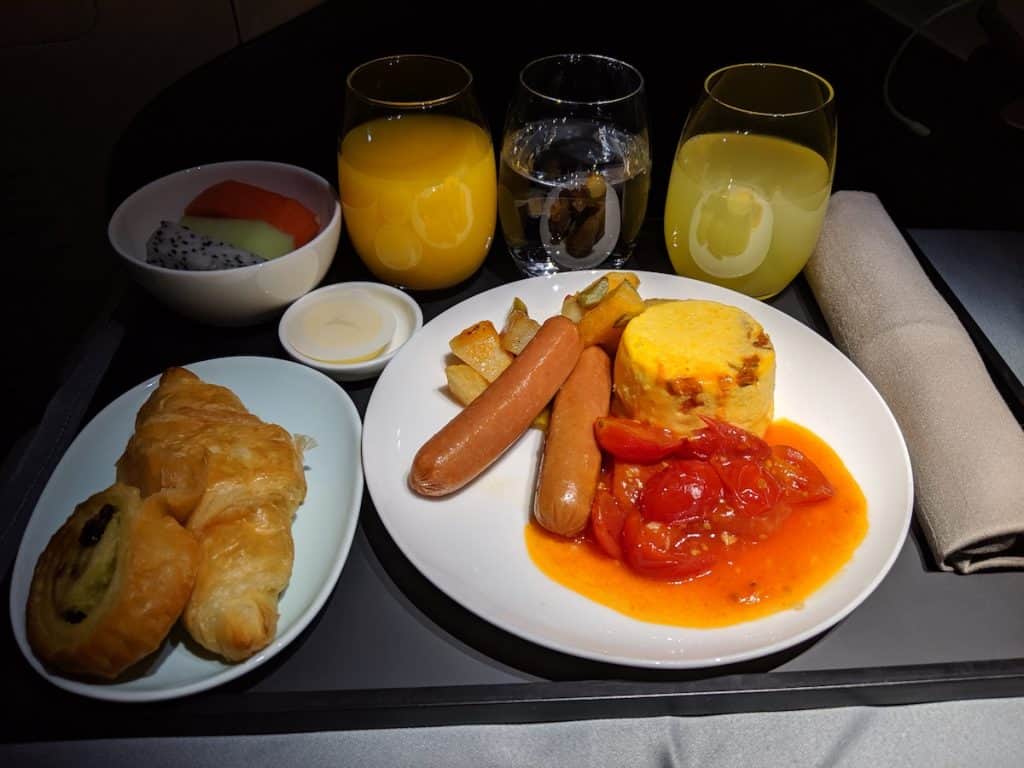 While Cathay Pacific Business Class is definitely a step down from the exclusivity and over the top service of First Class, it is still a wonderful experience.  With the addition of slippers and mattress pad coming soon, it will make a great product just that much better. 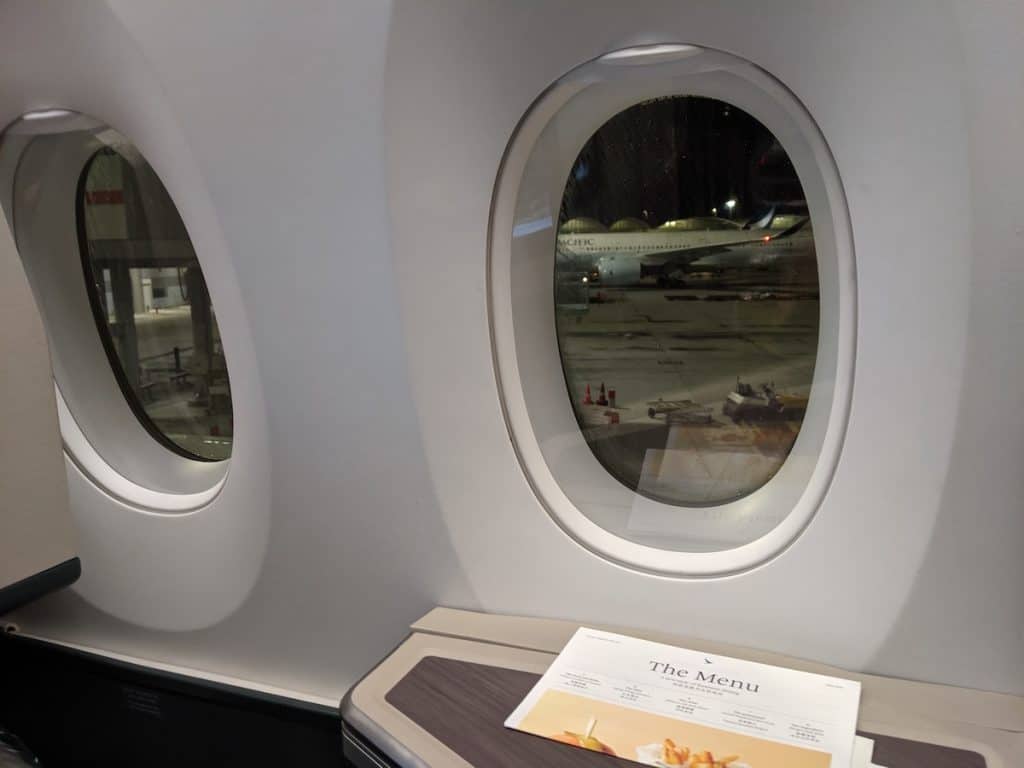