The final international flight of my round the world trip was in Cathay Pacific First Class Hong Kong to LAX, a flight that took 12 hours.  It was a comfortable way to end my trip.

After enjoying some time at The Pier I boarded the Cathay Pacific 777 around 4:10pm for a 4:35 departure.  There were still a large contingent of passengers that had yet to load.  All Business and First Class passengers loaded through the front door.  I was shown to my seat at 2A (I explain why this is the best seat on the plane in this post). 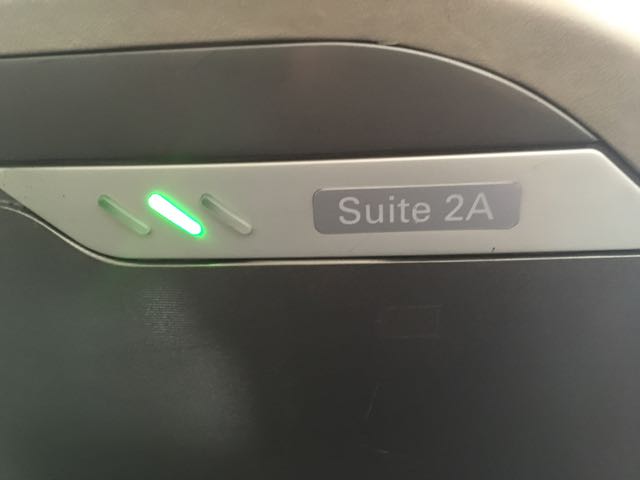 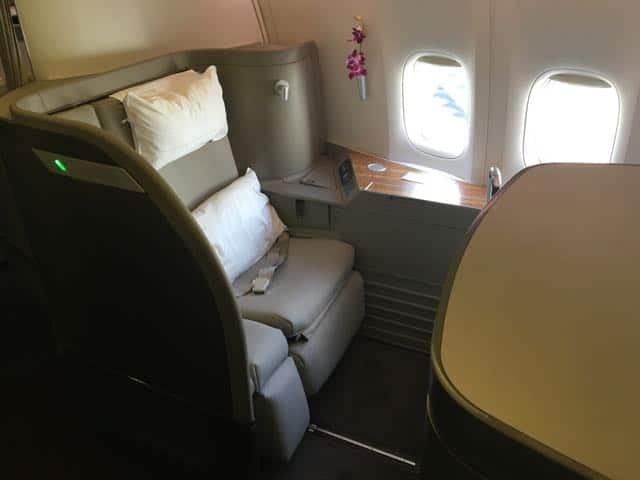 A few minutes later one of the flight attendants stopped by to apologize that she had been so busy she had only now been able to come introduce herself. 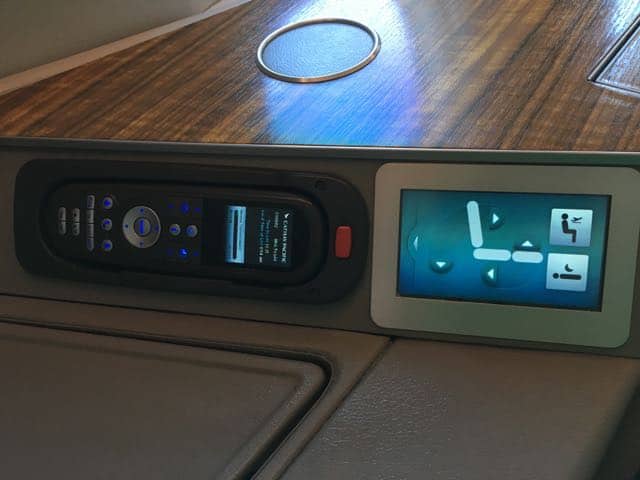 The seat on my Cathay Pacific First Class Hong Kong to LAX offered a lot of space and privacy.  There is no door on the “suite” so you can’t close it off completely, however with the relatively small First Class cabin, it felt very private. 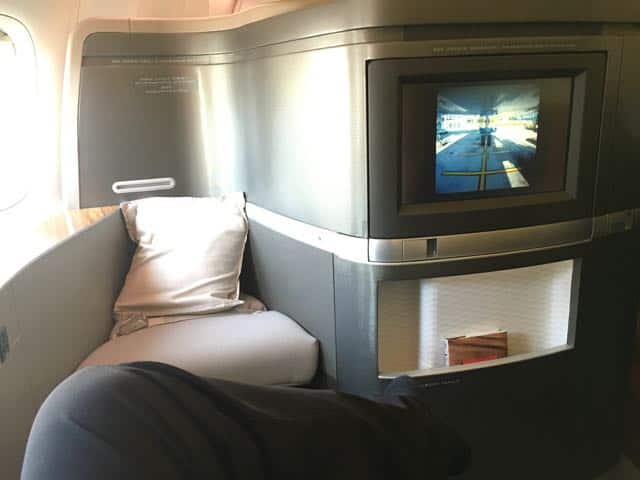 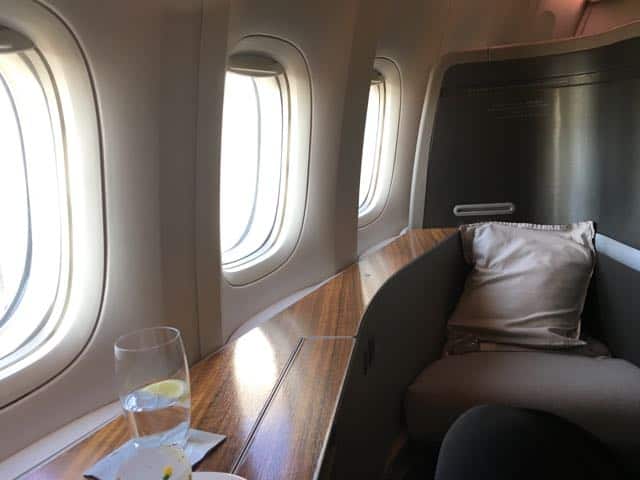 I found the seat to be very comfortable especially when the armrest was lowered. 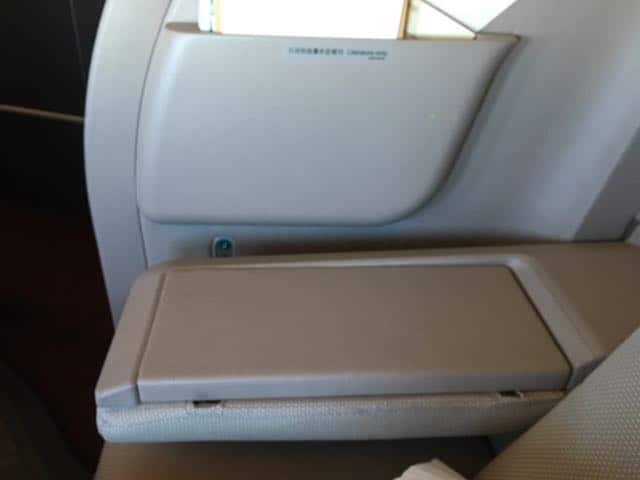 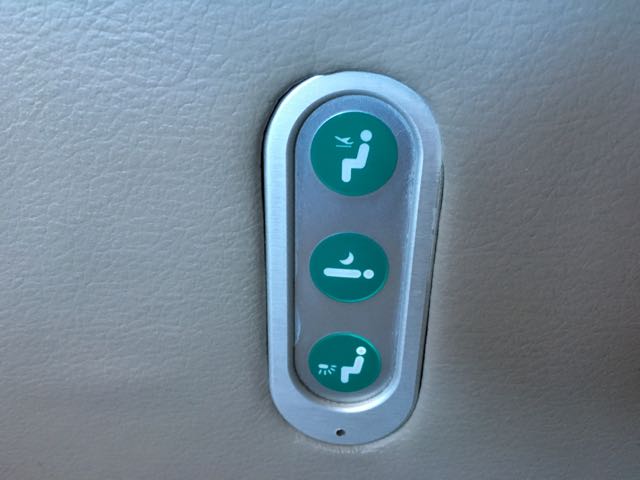 The screen is mounted on an adjustable arm so that you can get just the right angel no matter how you are sitting. 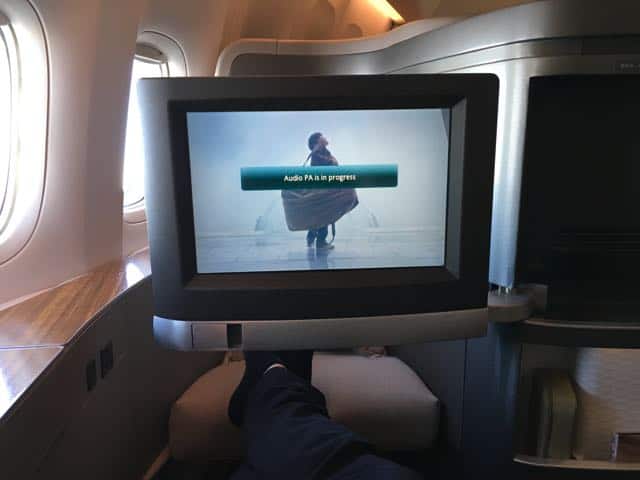 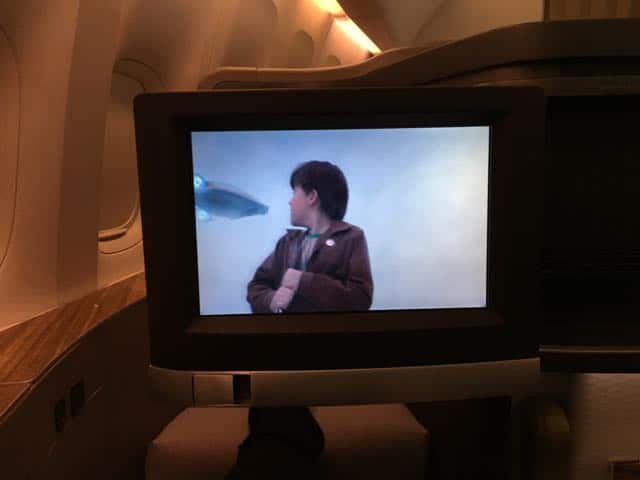 During the flight there was one empty First Class seat (2D).  Seat 1K seemed to be occupied by a CX staff deadheading.  So essentially there were 4 First Class passengers being served by 4 flight attendants.  Pretty good ratio.

Before take off I was given my menu to look over.  The staff explained that all food was ala cart and could be ordered whenever I pleased.  Pre-departure Krug champagne and mango smoked salmon was also offered. 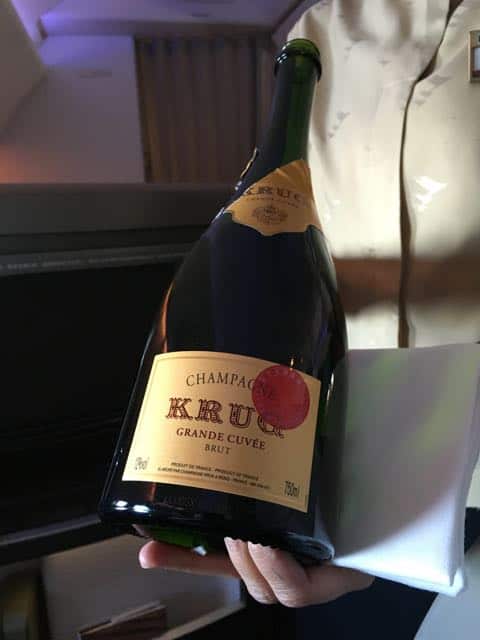 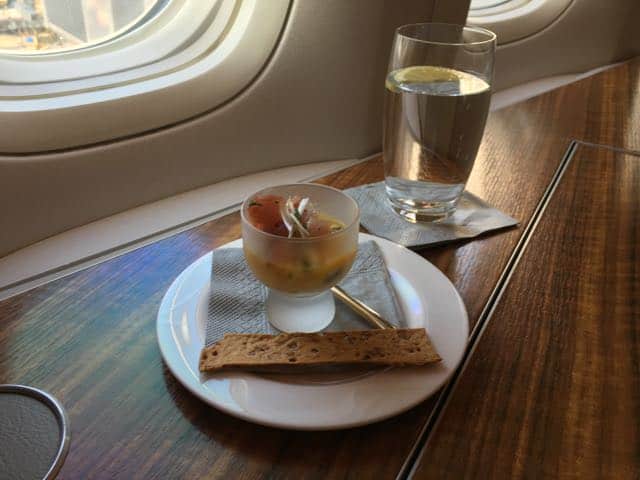 The amenity kit and pajamas were also brought pre-departure.  The flight attendant asked if I would like to change now or later.  I chose later and she tucked the pajamas away in my closet.

The amenity kit was surprisingly basic but elegant.  Clean beige kit that matched the Cathay Pacific color scheme.  The male kit contained Aesop branded Camellia Nut Facial Hydrating Cream and Rosehip Seed Lip Cream, a wooden comb, microfiber for eye glass cleaning, ear plugs and a pouch with toothbrush, toothpaste and mouthwash.  In the lavatory was Aesop face wash, body lotion and refreshing mist spray.  The kit could be reused for sure and seemed sturdy. 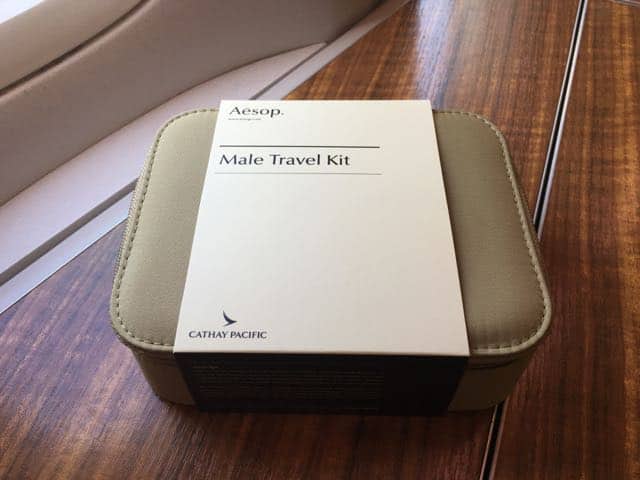 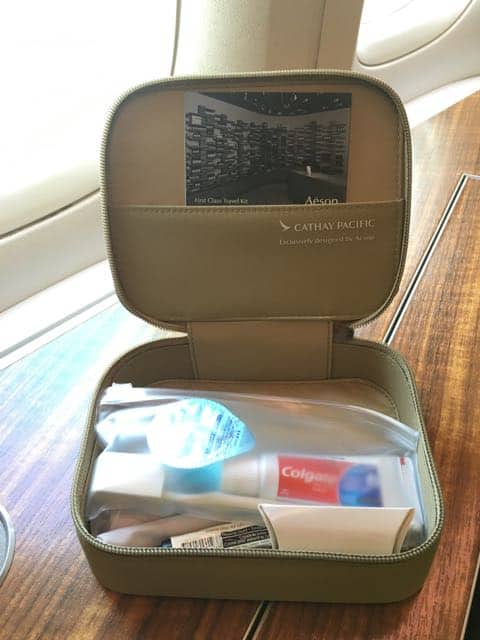 The pajamas were extremely high quality.  Made with 100% organic cotton and “tailored” by PYE, a Hong Kong company.  The pajamas came in a dark gray fabric bag embroidered with Cathay Pacific’s logo.  My pajamas were a rich blue color with heather gray accents.  They were extremely comfortable and much better quality than the Emirates pajamas.  Also in the bag were matching slippers and eye shades made out of the same fabric. 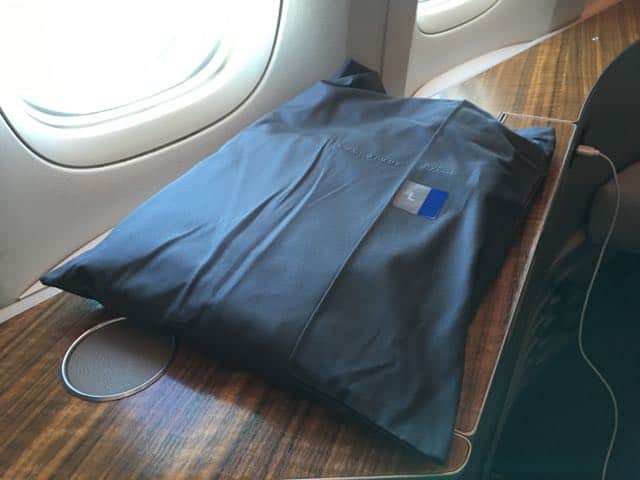 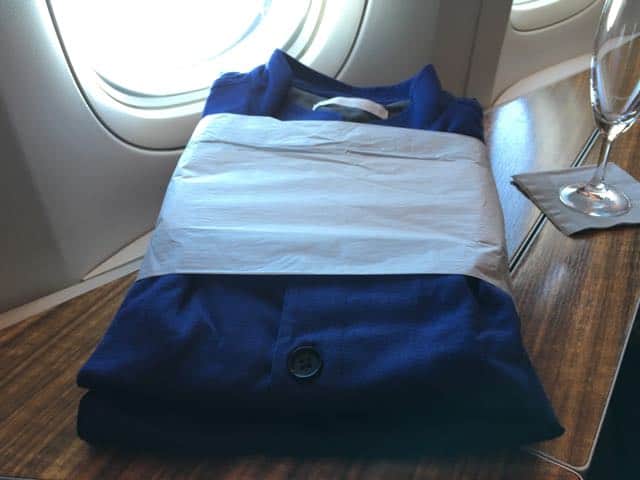 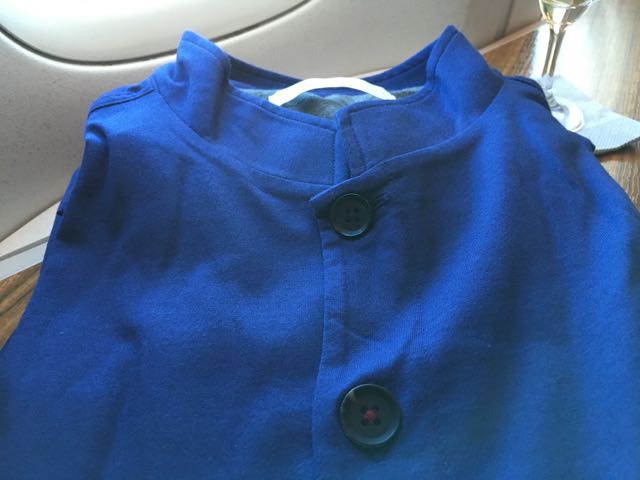 The flight attendant also brought a pair of active noise canceling Bose headphones.  I appreciated that there was a paper band around the right earphone, showing that it had been cleaned between use. 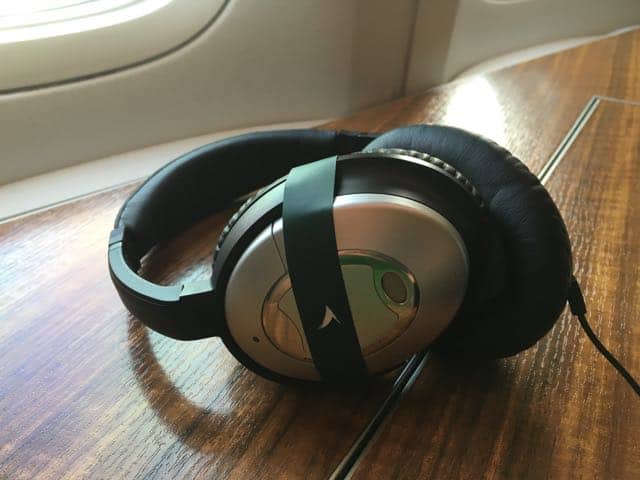 Once the gifts had been handed out it was time for take off. 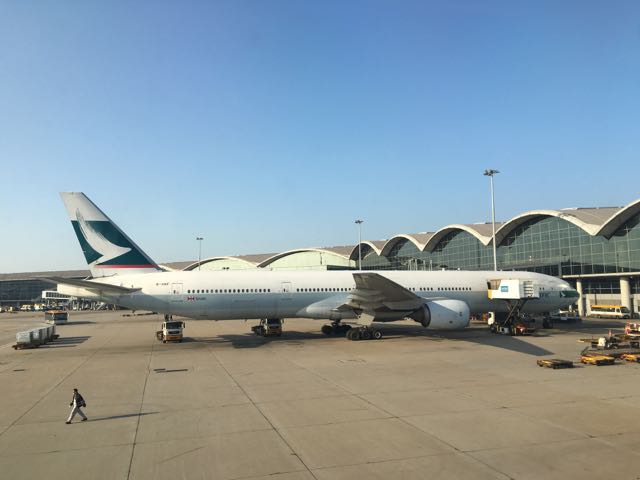 Shortly after leveling out the flight attendant came through to check on me and see if I would like to order my dinner.  The staff were all quite friendly but very professional, always referring to me as Mr. Waite. 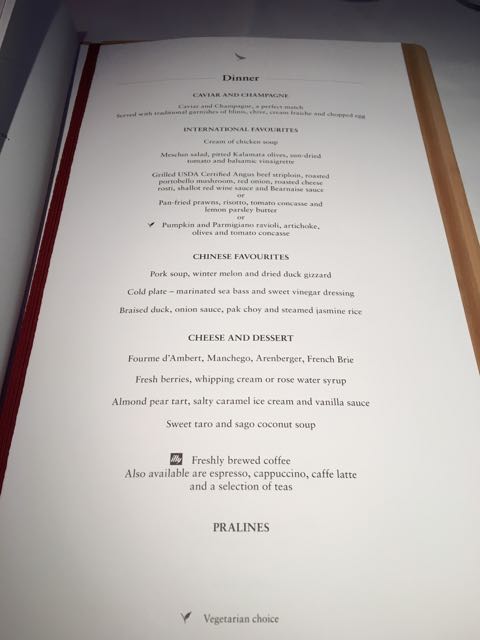 I decided to start with more Krug and caviar, complete with the mother of pearl spoon.  A nice note from the staff was brought with my first course, thanking me for flying with them. 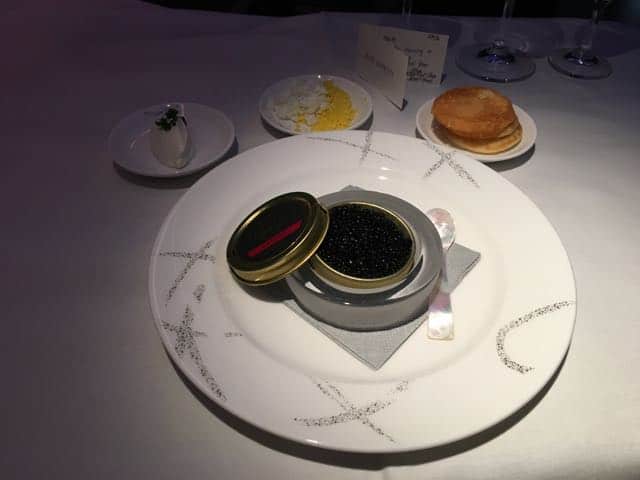 I followed the caviar with the delicious cream of chicken soup and then the salad. 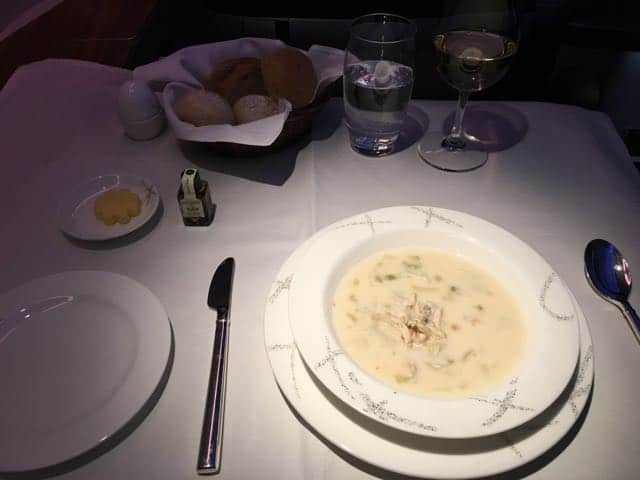 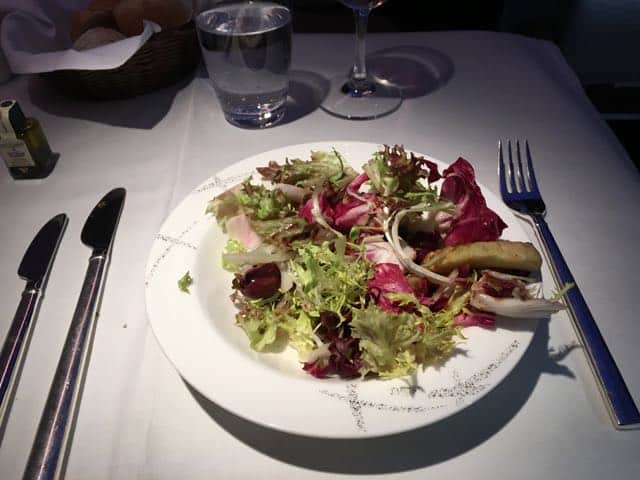 For my main course I had the pumpkin ravioli.  It was very good for airline food but probably not a dish I would say was extraordinary. 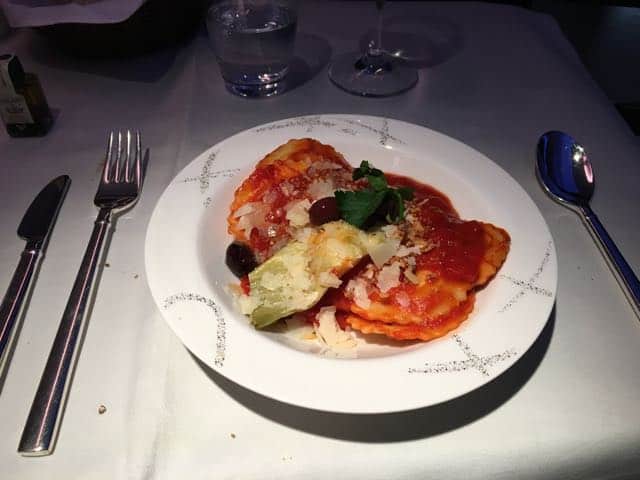 For dessert I ordered the berries with whipping cream (although the cream was un-whipped, but maybe that is how classy folk do it).  A hot towel and pralines were served with dessert. 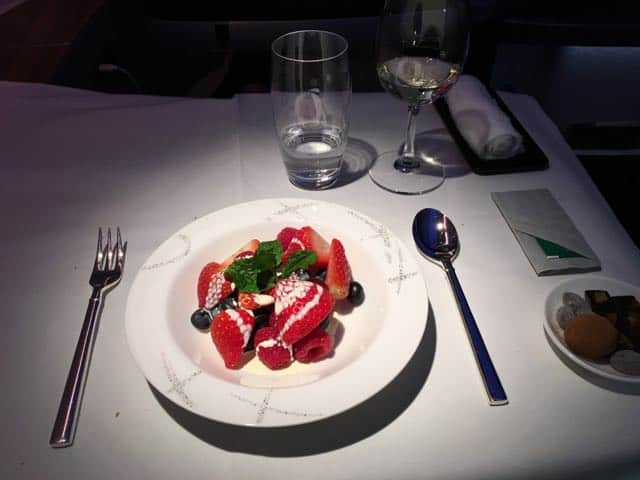 There was an extra dessert option for Chinese New Year which I passed on, however they did bring a special Year of the Monkey treat (sesame biscuits). 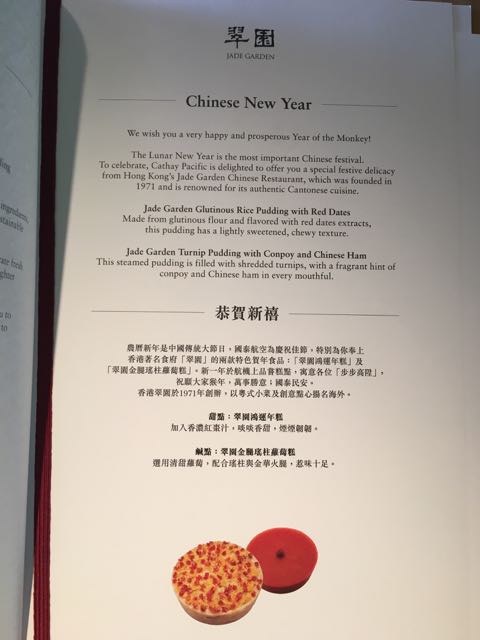 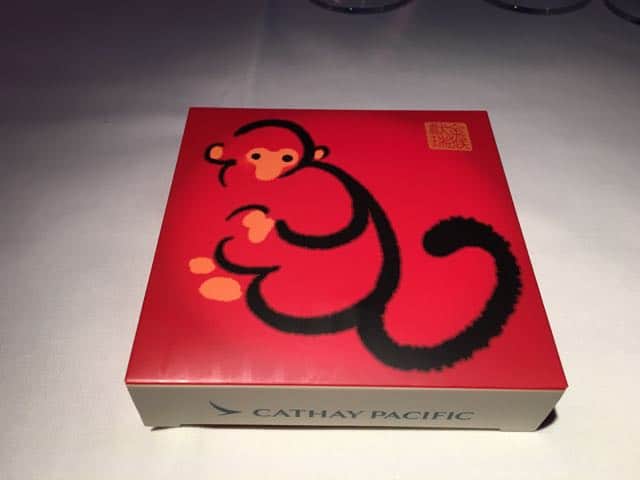 At that point I went and changed and had my bed made up. 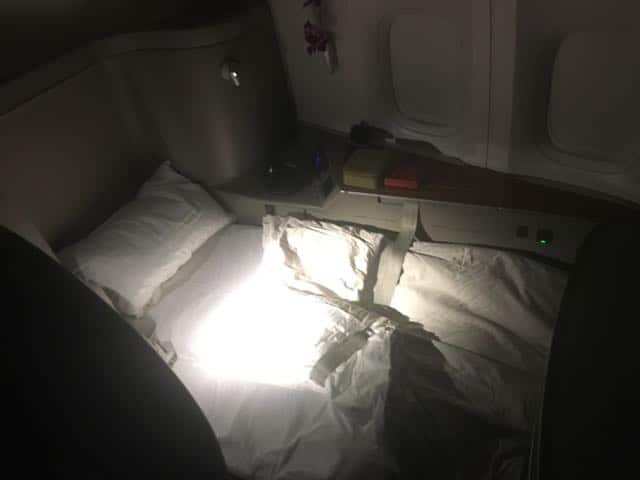 I found the bed to be very comfortable with nice duvet and mattress topper.  The bed was quite wide and never felt claustrophobic.  I was able to sleep a good 7 hours and woke up with about 90 minutes to go in the flight.

At that point I ordered breakfast. 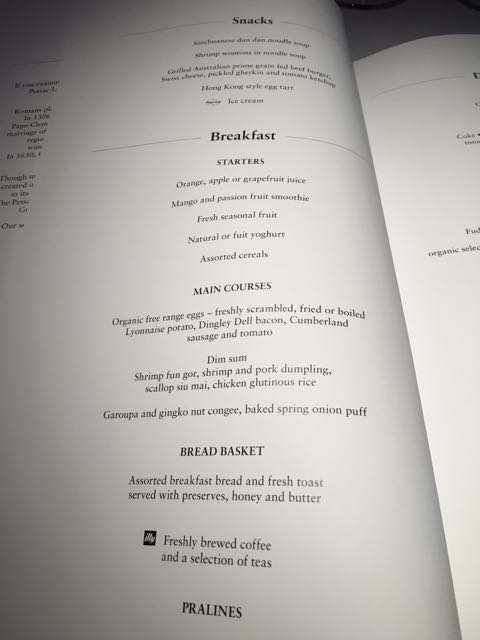 I had the fresh fruit and yoghurt to start, followed by the American type breakfast (hold the bacon).  I had my eggs scrambled and they really were fresh; I am not sure how they cook them at 35,000 feet but they figured out a way. The fruit was a bit overpowered by the large piece of grapefruit and the grapes had seeds — I had to find something to complain about for this review! 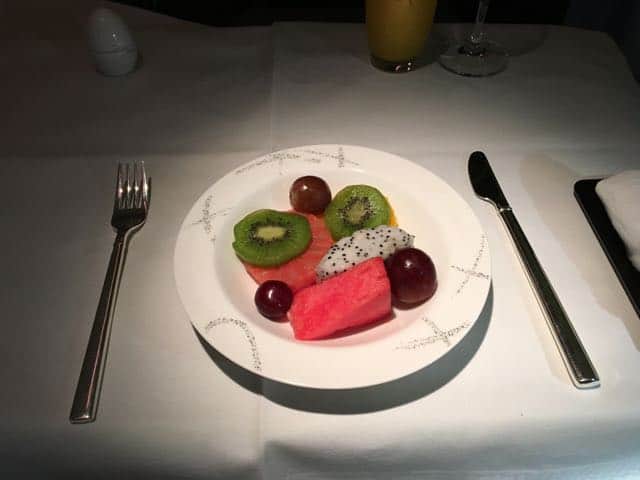 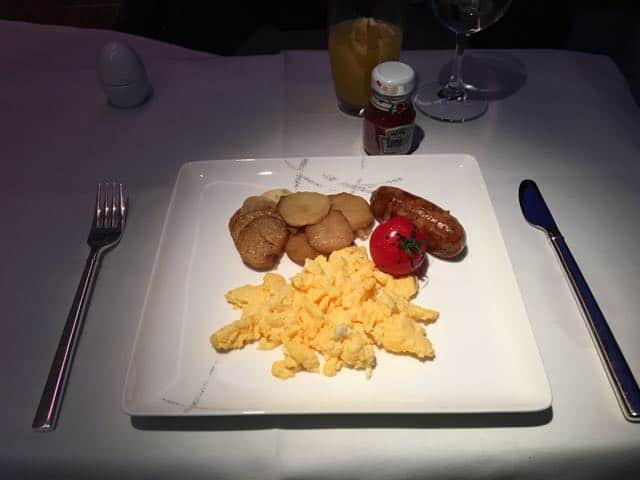 The flight attendants were just the right level of attentive.  I never felt smothered but they were always there to help right up until we were landing.  I have heard others complain that the crew can be a bit invisible during the flight; perhaps if I had been awake I would have noticed this.  However in my experience this was never and issue.  The service couldn’t have been better.

While definitely not as flashy as my Emirates flight, I think in a way I enjoyed my Cathay Pacific First Class Hong Kong to LAX even more.  It felt like a truly luxurious, pampered experience in the sky with top notch staff.  I was spoiled and I can’t imagine any future flights where I will be treated so well.