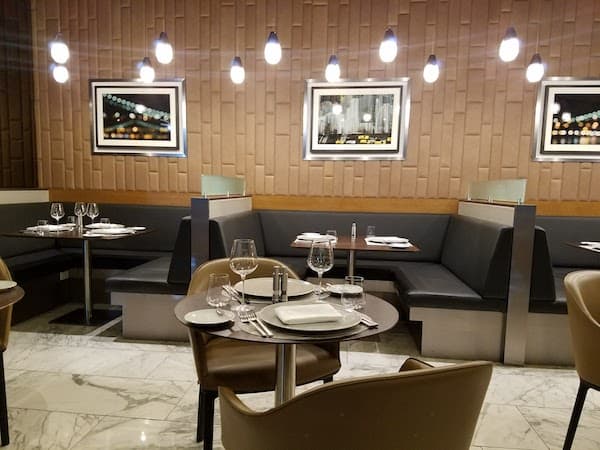 The new American Airlines Flagship First Dining is one of the more exclusive lounge experiences in the US.  It offers an intimate, full service restaurant experience.   Currently there are only two locations; JFK and MIA, though plans are to expand the concept to other AA hubs.

Unlike other American Airlines lounges, access doesn’t get you access.  Nor does traveling on a partner airline (with one exception).

In order to visit the Flagship First Dining, you have to be flying in First Class on a three class plane.  This includes certain international flights as well as American’s three class transcon flights.

The one exception is when flying Cathay Pacific First Class to Hong Kong or Vancouver.  I was booked on JFK-YVR on Cathay Pacific, booked with Alaska Mileage Plan Miles for 35,000 miles. 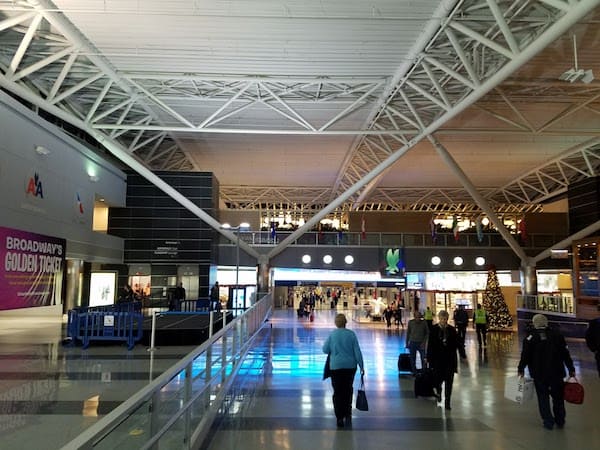 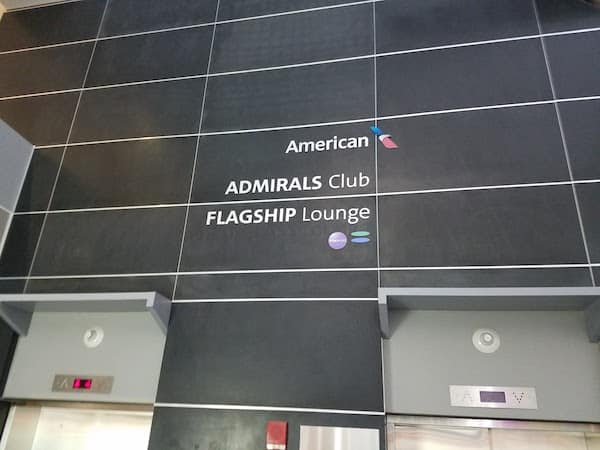 An elevator takes you to the check in area.

To the right is the Admirals Lounge.  To the left is the Flagship Lounge.  Upon checking in, I was offered to visit the Flagship First Dining.  The staff asked if I had been before.  When I said “no”, he offered to walk me to the dining room. 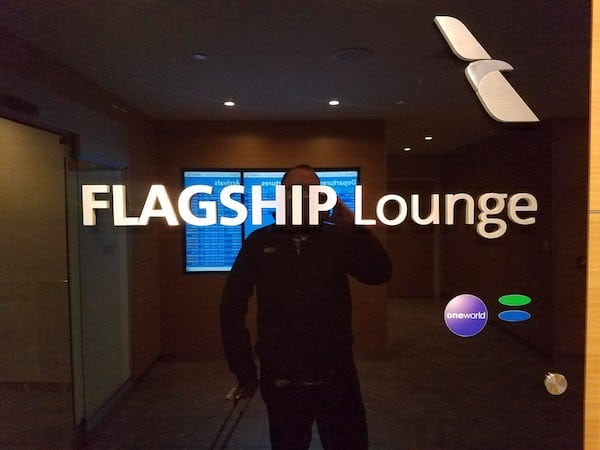 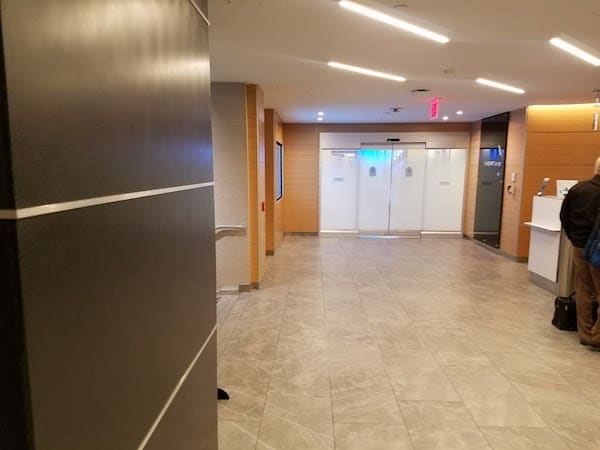 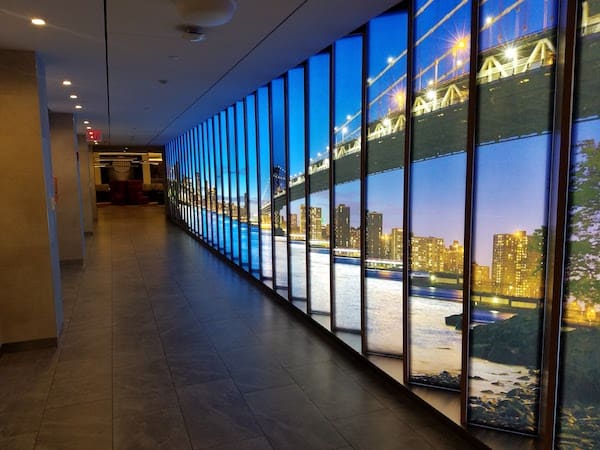 A long hallway with mural of New York City leads to the Flagship Lounge. 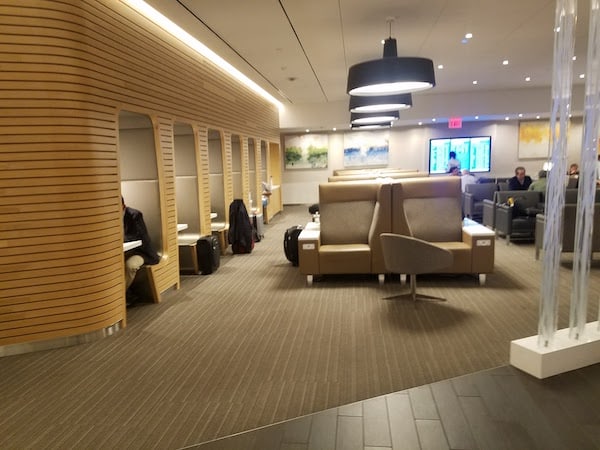 In a corner behind the buffet is a glass door that opens to the Flagship First Dining area. 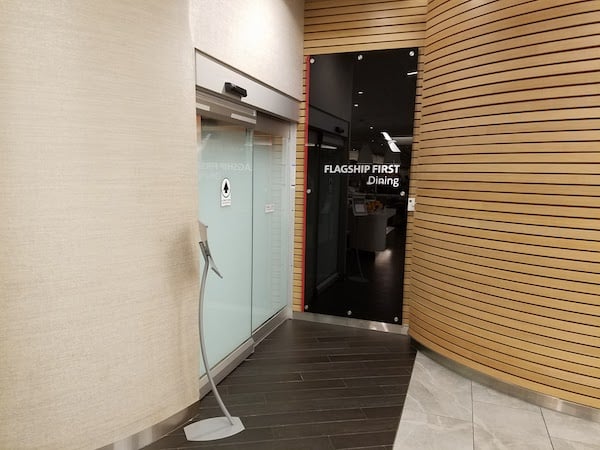 Just inside is a host desk.  Staff seat guests in the dining room.  Adjacent to the host station is the full service bar.  During my 2 hour visit I never saw a guest actually use the bar area.  The rest of the space is the dining room. 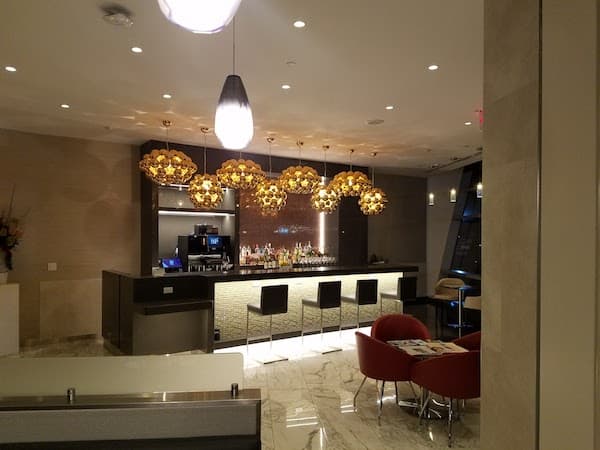 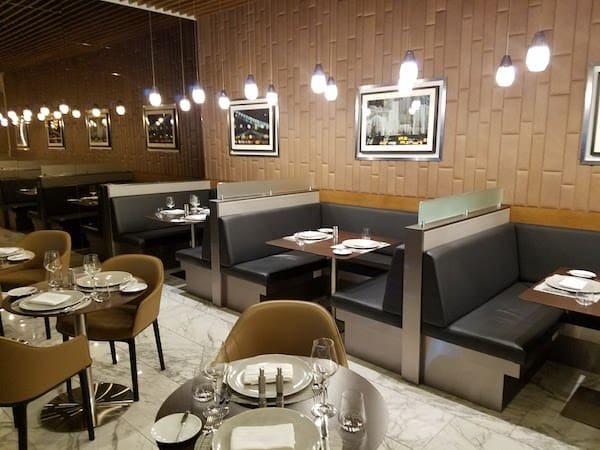 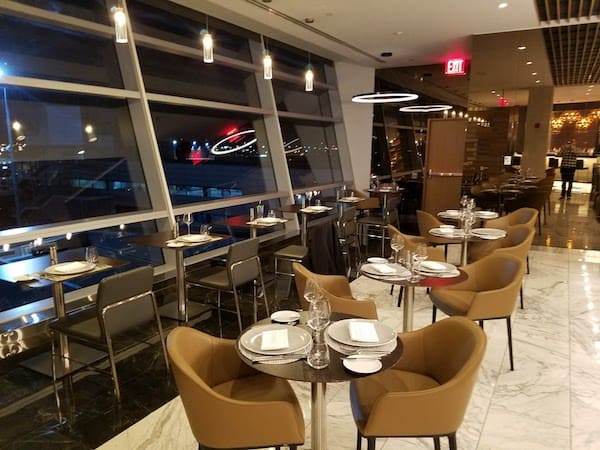 There are three seating configurations.  Booths offer the most space as well as outlets built into the benches.  The round bistro tables offer seating for two.  Finally the tables overlooking the windows seat one.  As a solo traveler, I appreciate the consideration of single diners and giving us an option besides a bar top.

When I arrived there was one other guest.  She quickly left and I was alone for the majority of my meal.  Two additional guests arrived as I was finishing up.

I did not feel that the staff was overly attentive.  In fact, at one point I was wondering where the staff had gone.  Luckily, I was not in a hurry.  That said, I found the staff to be friendly and professional.  One exception: I saw a waiter bring out a salad to an empty table.  I was confused since I was the only guest.  I then saw another staff come with Tupperware and pack up the salad.  Not sure if it was for their lunch break or if they were readying a to-go meal for a passenger; but it seemed a bit strange.

When I was the only guest, I appreciated that there was classical music (mostly instrumental versions of pop songs) playing.

Food and drinks are offered off a menu.  Guests are able to order whatever they want and however much they want at no cost.  Besides a full bar, signature cocktails, beer and wine are offered. 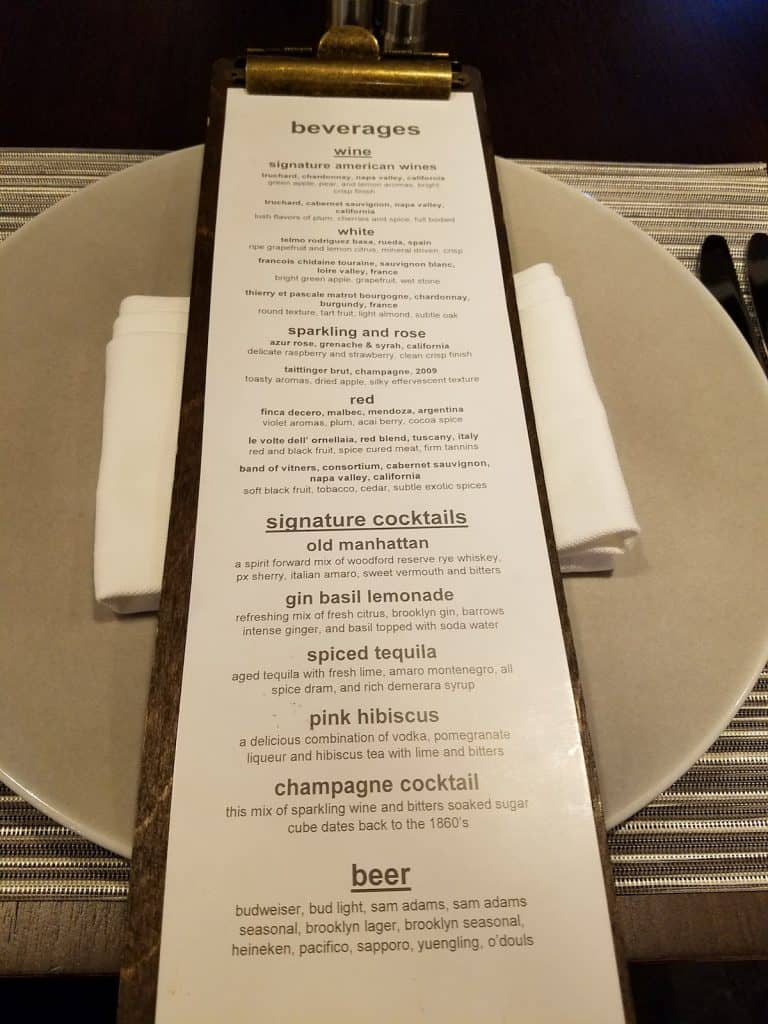 I tried the Champagne Cocktail which was quite tasty and presented beautifully. 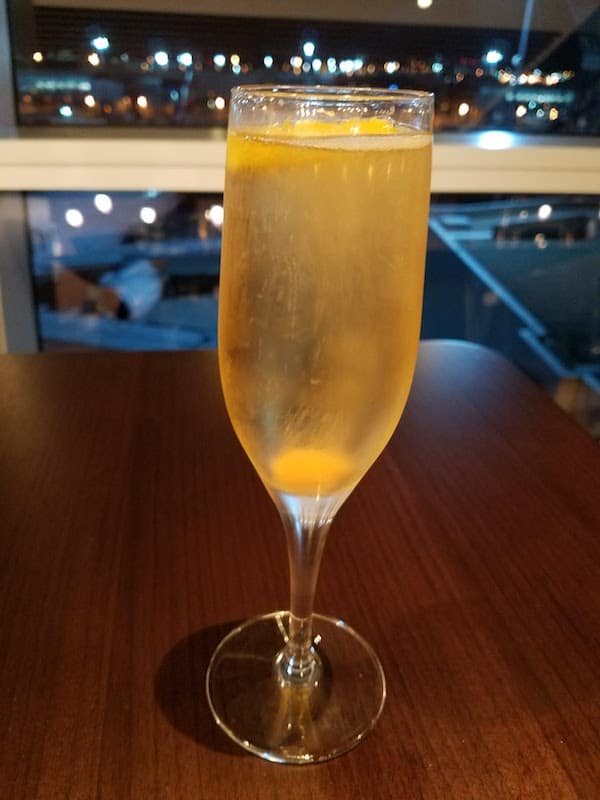 The food menu offered a small selection but I imagine most would be able to find something that worked for them. 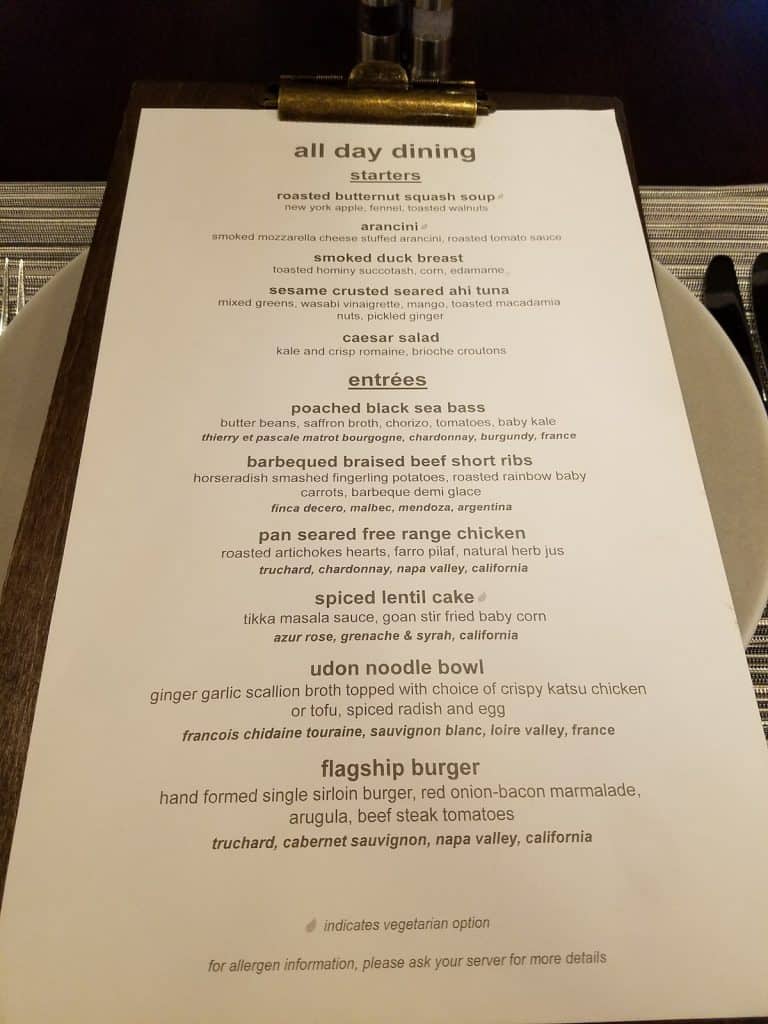 For my starters I went with the arancini and caesar salad.  I found the arancini fantastic though the red sauce tasted like basic spaghetti sauce.  Presentation was beautiful. 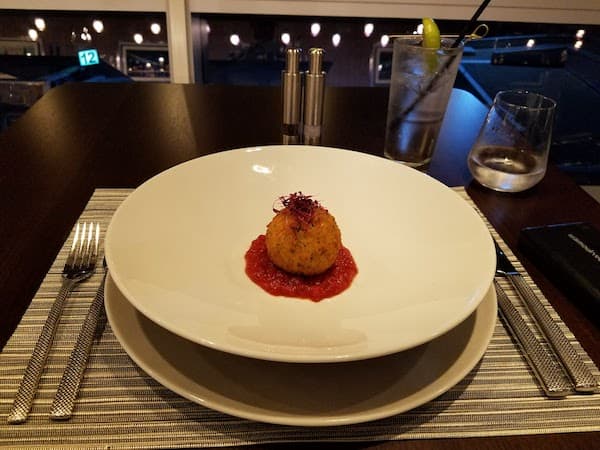 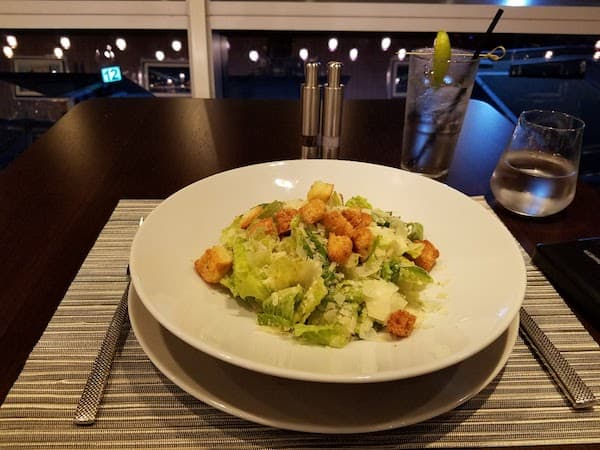 For my main course I went with the flagship burger as I had heard it was quite tasty and popular.  I enjoyed it, though the bun was a bit dry.  I think it had been left under a heat lamp for too long. 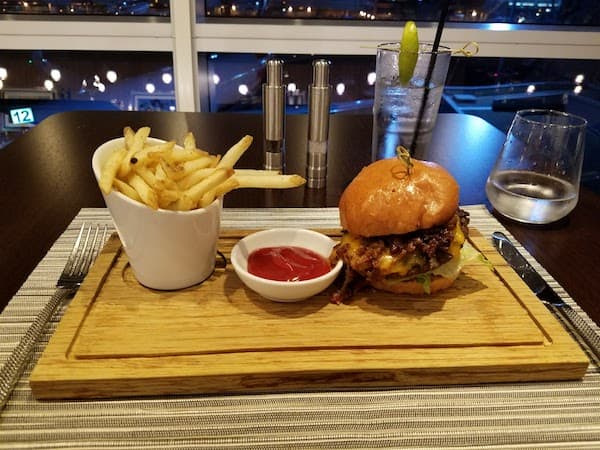 I was completely stuffed at this point, but couldn’t pass up on dessert. 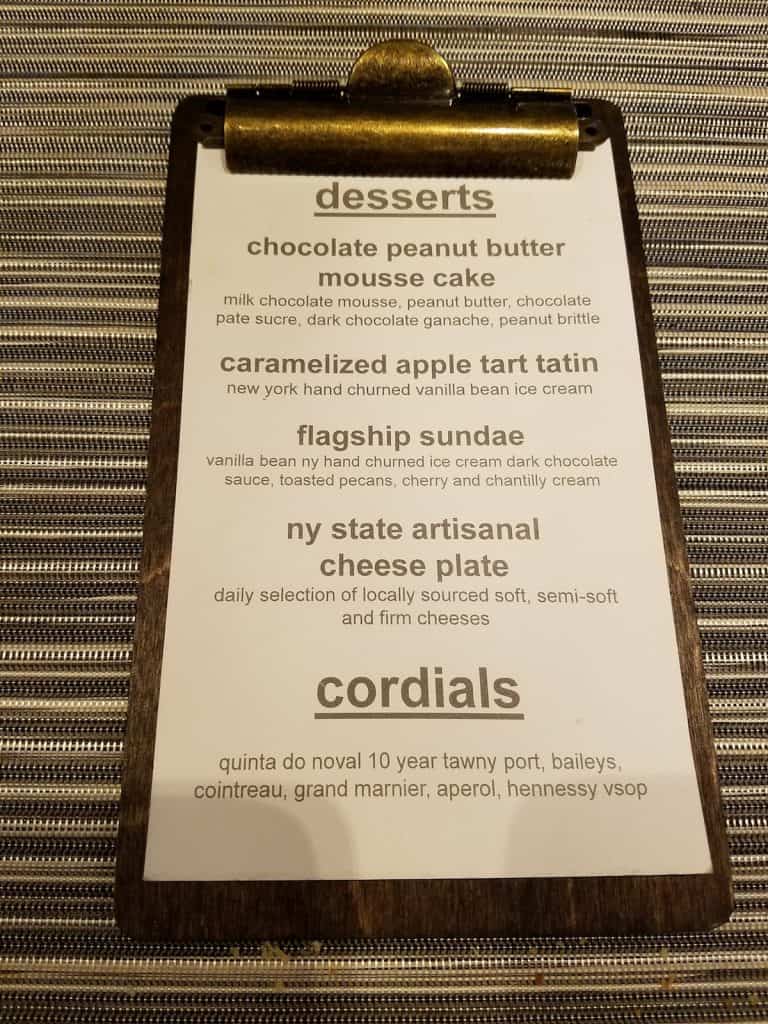 I picked the chocolate peanut butter mousse cake.  Not only was the presentation fantastic, but it was one of the most rich chocolate cake I have ever tasted. 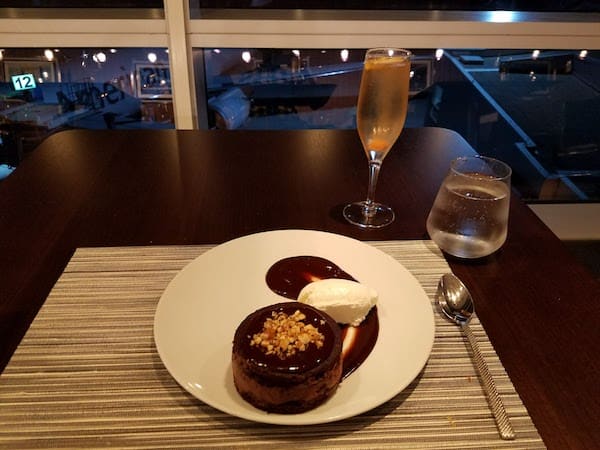 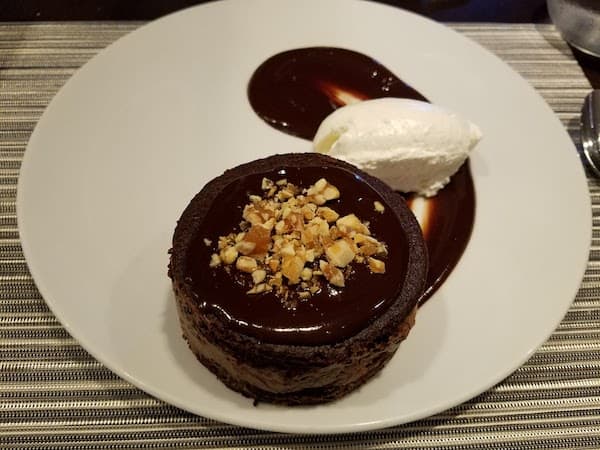 I have to admit I ate every bite.

After dinner a card requesting feedback was brought to my table with a chocolate airplane. 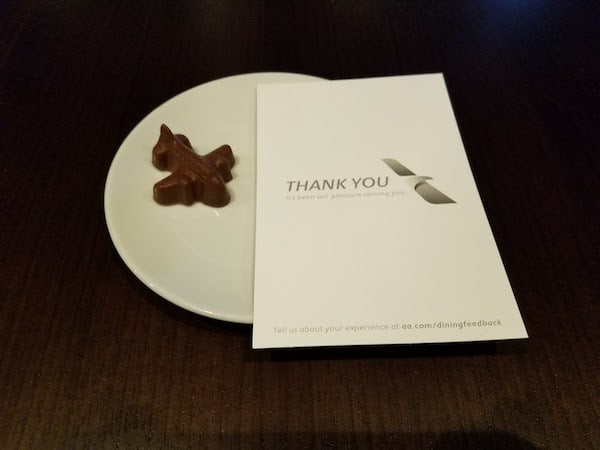 I was very impressed by the AA Flagship First Dining.  I’ve tried other First Class dining around the world:

I would say that the American Airlines Flagship First Dining is a step below each of those, but not significantly.  That is saying a lot.  Overall I find American Airlines to be one of my least favorite airlines to fly.  That they have introduced a high quality product like this gives me hope that they can turn around their otherwise third rate service.

If you are flying out of JFK and have access the Flagship First Dining, make sure you arrive with plenty of time to enjoy it. 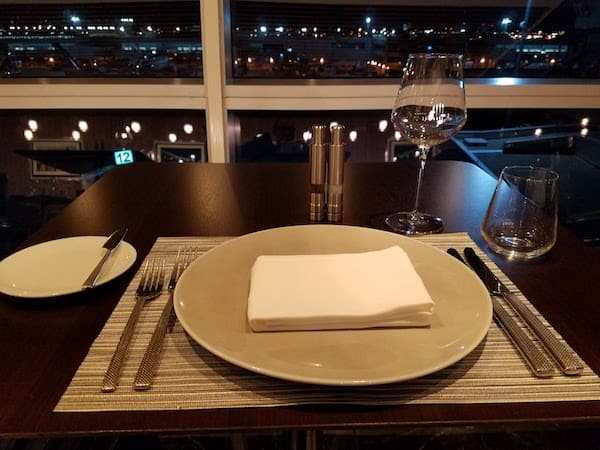 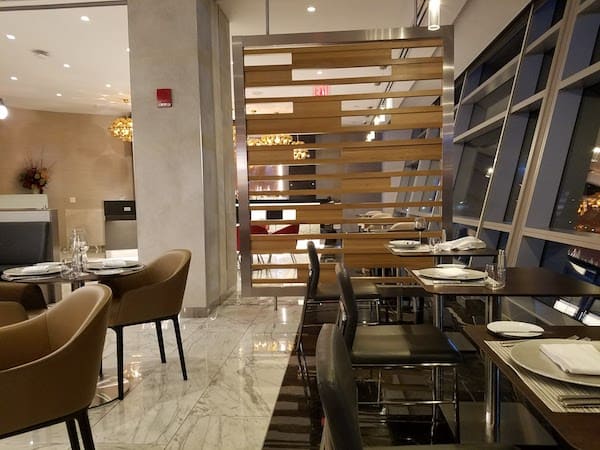