Let me start out this post by saying there are much bigger problems in this world than terrible flights.  Famine, war, the US Presidential election.  And even on flights there are much bigger issues than I experienced.  Crash landings, overflowing toilets, outbreaks of norovirus (been there done that).  Sometimes I get a bit bored by travel bloggers complaints about travel.  If you also get annoyed by whining, stop reading now.  Otherwise break out the cheese and crackers because I’m about to serve up a vintage bottle of complaints.  Here is my review of the American Airlines A330-200 Business Class DUB-ORD flight. 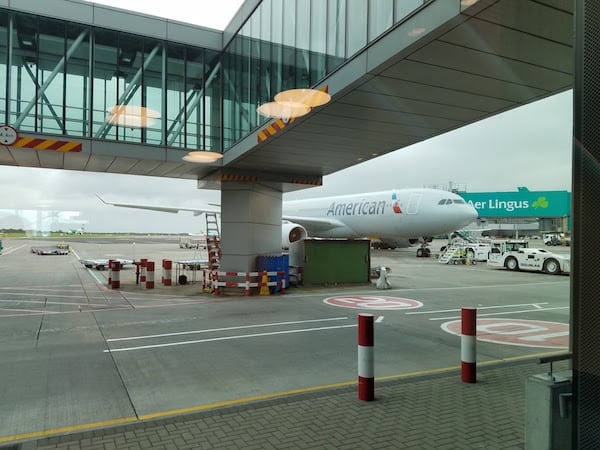 I booked my American Airlines A330-200 Business Class DUB-ORD flight as a first leg on a roundtrip ticket back in December during a great sale.  $1280 Roundtrip DUB-ORD-SEA SEA-LHR-DUB in Business for International and First for Domestic.  I ended up using 58,000 Citi ThankYou points (at a value of 1.6 cents on AA) plus $458 cash.

The trip will earn 33,000 redeemable miles and 15,600 Elite Qualifying Miles with Alaska Mileage Plan.  While I first had to get to Dublin, I am using the SEA-LHR portion for a trip I already was planning with my mom.

I arrived at the Dublin airport about 2.5 hours before departure.  Unfortunately Dublin doesn’t accept mobile phone boarding passes, so I had to get a paper ticket.  The Priority Line was about 60 passengers deep.  Luckily an employee helped me out by taking me to a side desk since I didn’t have any luggage to check.

Once through security I headed to the Dublin US Customs Preclearance and then visited the brand new US Preclearance Lounge. 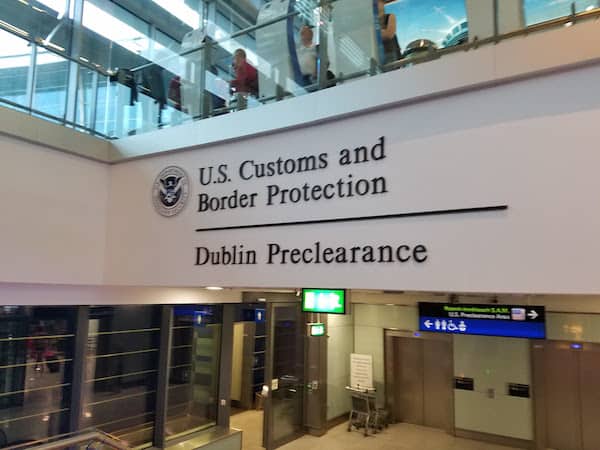 When it was time to board I was pulled aside by the AA gate agent and, for lack of a better word, interrogated.  Where do you work?  How do you have money to fly this?  Who is the CEO of your company?  Etc. etc.  After she was finished I asked if this was because I was on essentially a mileage run with only a quick stay in Dublin.  She said no, it was because the agent at check in forgot to put a sticker on my passport.

Upon boarding the American Airlines A330-200 Business Class DUB-ORD I was pleasantly surprised by the layout of the Business class cabin.  There were 5 rows in a 1-2-1 configuration of the old reverse herringbone seats.  Originally I was in 2H but for some reason was moved to 1H.  There is no First class cabin.

After I put my bag in the overhead bin I took out my phone to take a picture of my seat (with no other passengers in it).  I heard a voice say “WHAT are you doing?”  This was the Business class Flight Attendant (1 of 2) and this was her first introduction to me.  I said, “Oh, just taking a photo of my seat.  Would you like to take a photo of me in it?”  She did take a photo and I think I dodged the wrath of the mythical anti-photo AA flight attendants.  The rest of the flight I was more cautious about my photo taking, afraid I would get yelled at or worse.  Which seems, you know, crazy.

Said flight attendant was in charge of my aisle (so a total of 10 passengers) while a slightly friendlier man was in charge of the other 10 Business class passengers.  After my initial interaction she was a bit nicer to me.  However the woman across the aisle from me must have done something in another life to piss her off.

Another flight attendant came through with headphones and newspapers.  I asked if my headphones would work, she said yes, and moved on, not offering a newspaper.  Oh well, I had movies to watch; or so I thought…

Our jolly flight attendant came to each of us to ask what we would like to eat.  My neighbor was listed as preordering the beef.  She explained she didn’t eat beef.  “Well, the computer says you ordered beef so that’s that”.  When she took my order I asked for chicken.  “Sorry, we only got 3 of those”.  I was in Row 1, mind you.  I took the ravioli instead.  Later I overheard the other FA taking orders and offering chicken so clearly they weren’t out.  Not sure why she would say that and say I couldn’t have one.

Later she asked my neighbor “Is this your magazine?” as she picked it up off the top of the ottoman.  “You can’t put things here” she said as she tossed it on the passengers lap.

When it came time for the prelanding meal, I ordered the beef salad.  While tasty, there was zero beef on it.  Either they forgot to load the beef or maybe my friendly flight attendant was a militant vegetarian.

Service aside, the hard product, while outdated, was quite comfortable. 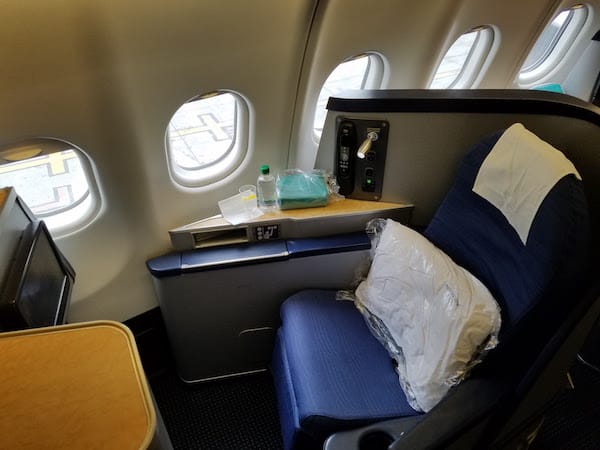 I have flown the really old AA Business class before to Beijing; with the seats that don’t lie flat.  These seats were much more comfortable and lie completely flat.  Being a 1-2-1 configuration I had a window and an aisle seat.  There was plenty of room at the seat, more space than British Business class and a bit more private.  Being in Row 1 you don’t lose any leg room.  The only issue is the light from the crew area and lavatory. 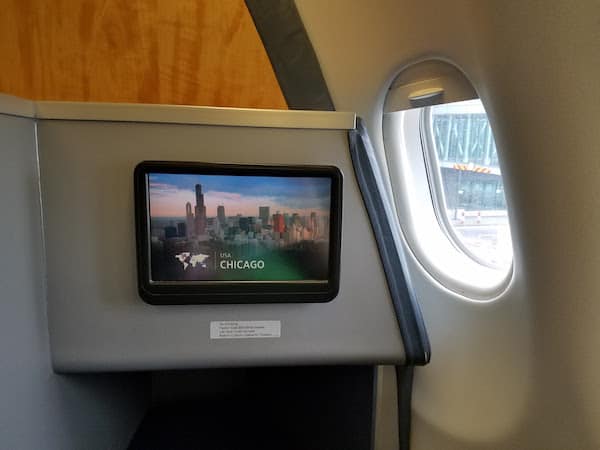 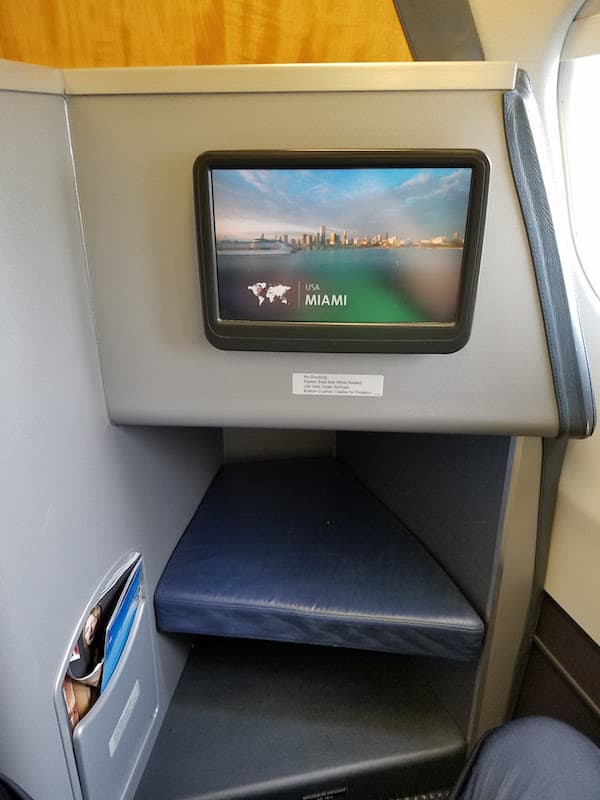 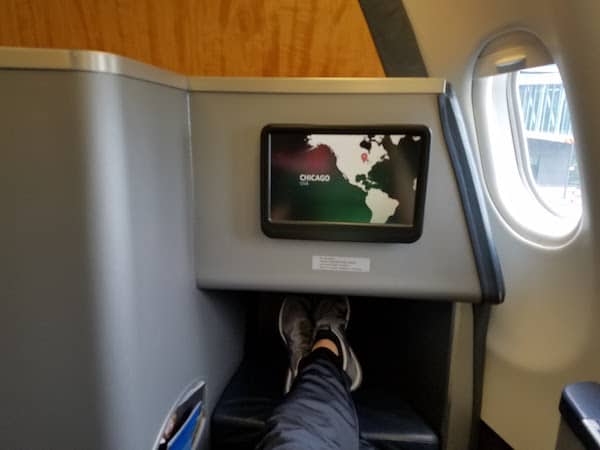 The seat is adjustable; with 3 preset configurations (bed, lounge, and takeoff/landing).  A small table folds out of the armrest.  There is also shelf space for drinks when your table is folded up.  Besides the overhead light there is a LED reading light. 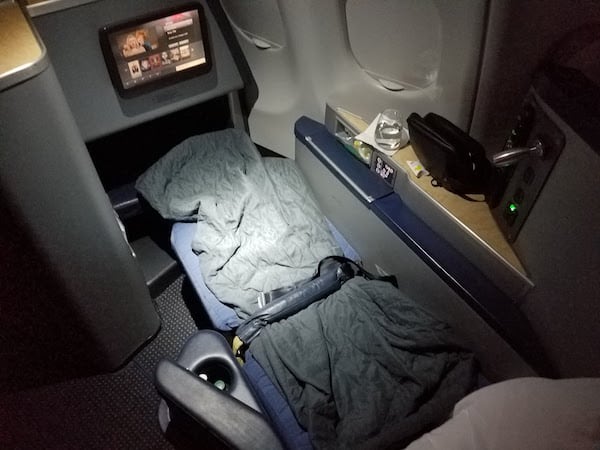 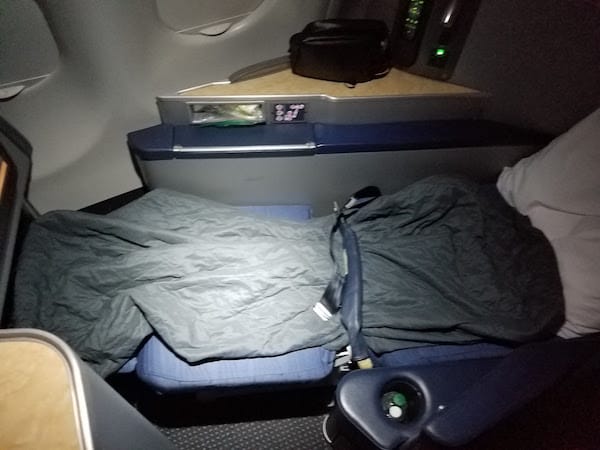 There is a fixed foot rest and under the foot rest is additional storage space.  Next to the seat is a cup holder for a water bottle, though none was given out. 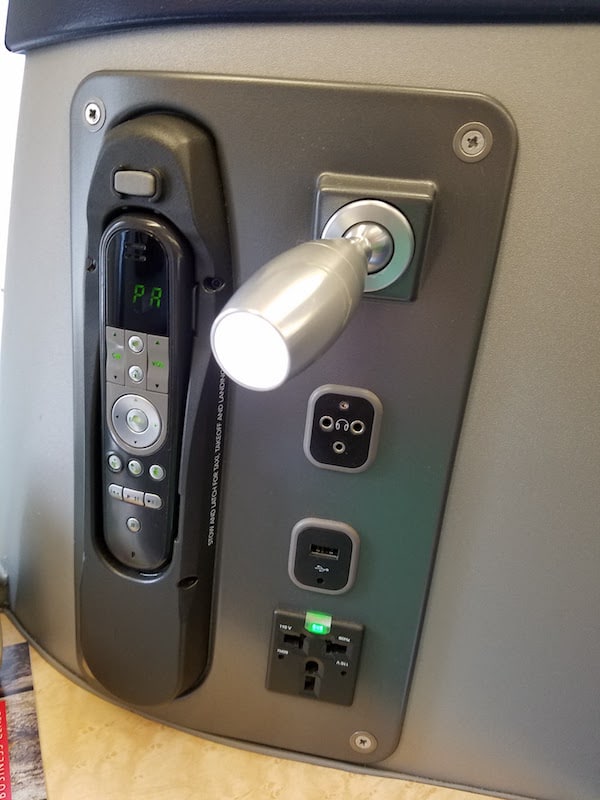 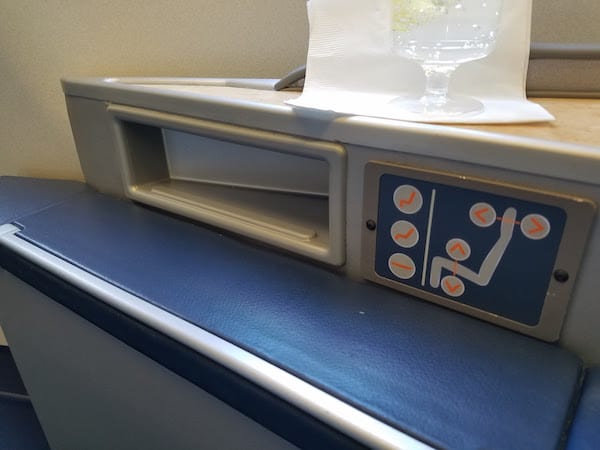 The inflight entertainment touch screen is fixed on the ottoman on the American Airlines A330-200 Business Class DUB-ORD.  It is not a very big screen but works despite being non-adjustable.  Controls are on the screen itself or on the remote that is located by the power adapter.  Decent movie choices however my IFE stopped working after 2 hours of the 8 hour flight.  I asked three different AA staff to reset it to try to fix it, none actually tried my suggestion so I was left without IFE.

There was no wifi on the American Airlines A330-200 Business Class DUB-ORD flight.

A medium size pillow and blanket were at each seat.  Clearly my blanket had seen better days with two holes burned into it. 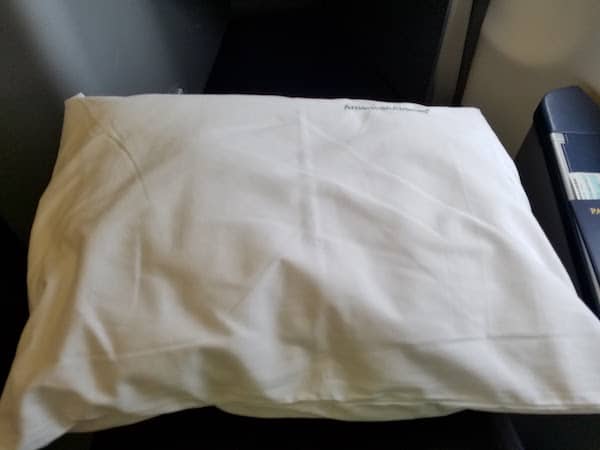 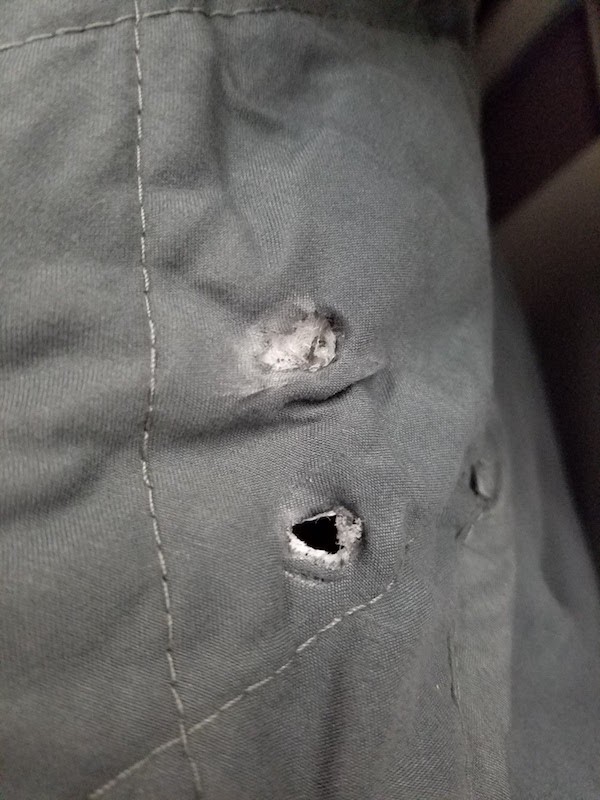 The new Business class amenity kit is quite nice.  The bag itself is labeled as Cole Haan and the products inside are CO Bigelow (which is now also featured in the Admirals Club).  Contents are basically the same as they have always been.  I did like the colors and was happy that they had a small cup of mouthwash in addition to travel size toothbrush and toothpaste. 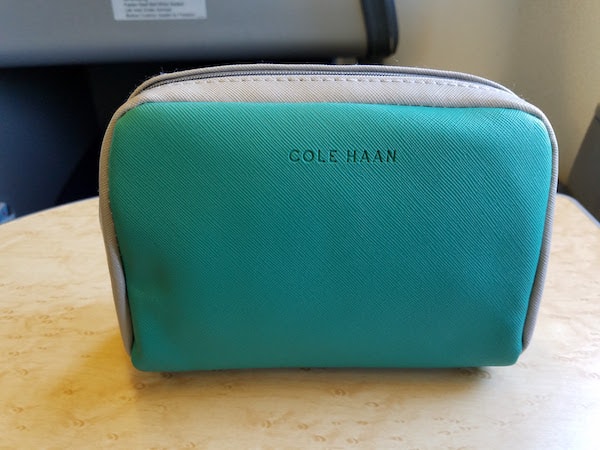 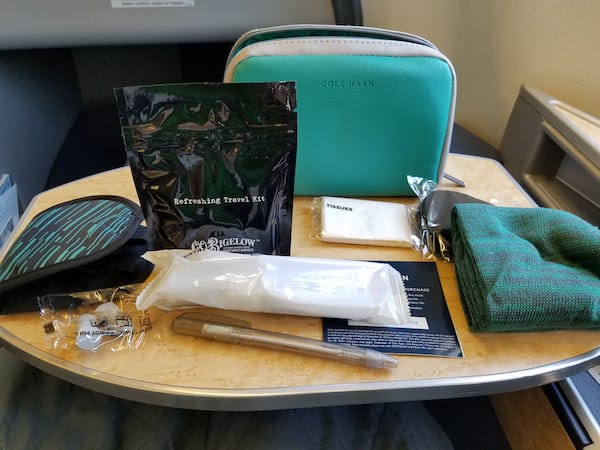 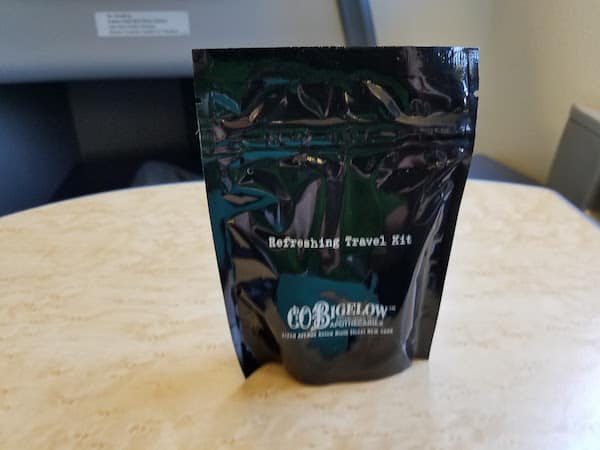 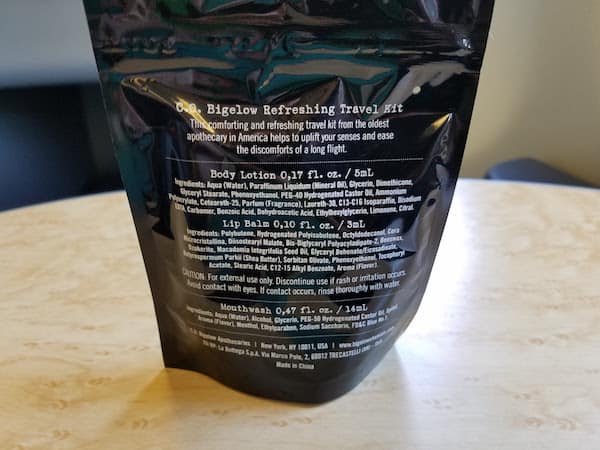 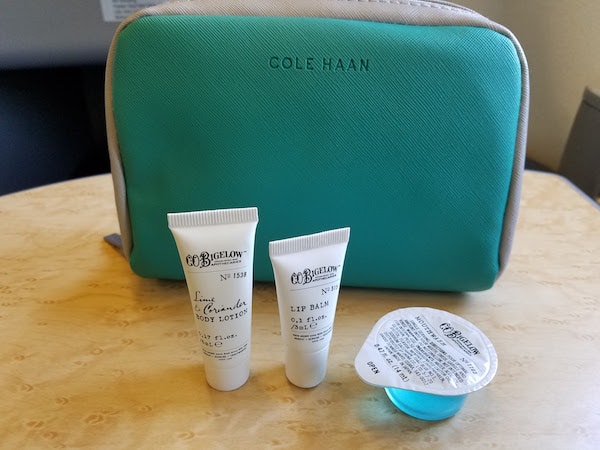 There were two meals served and both were actually pretty tasty. 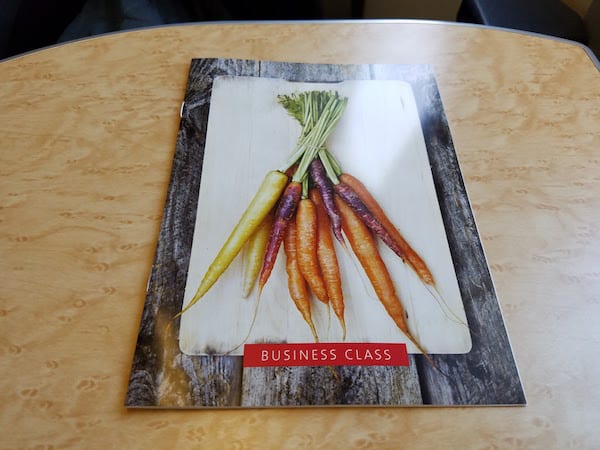 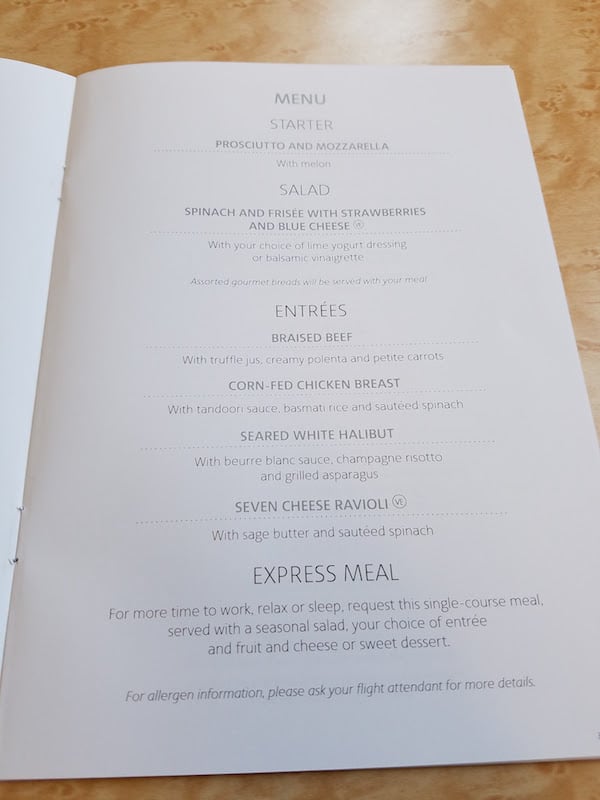 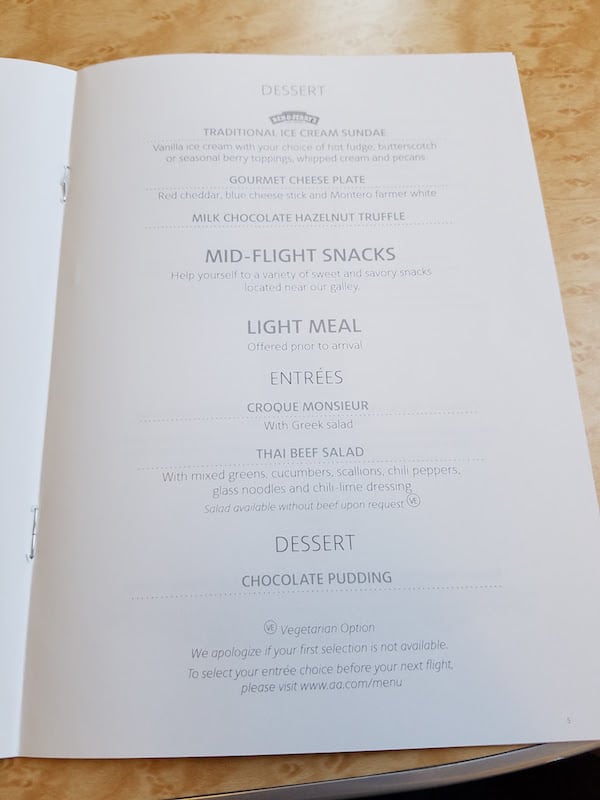 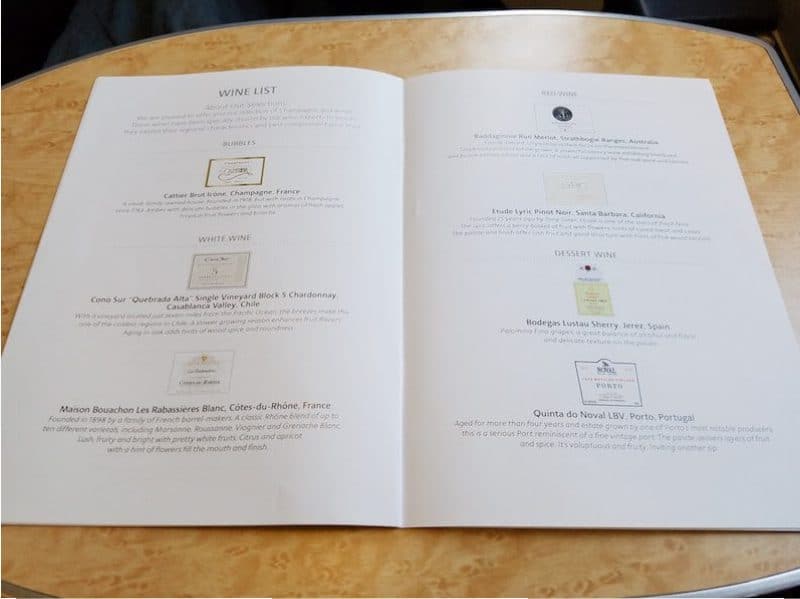 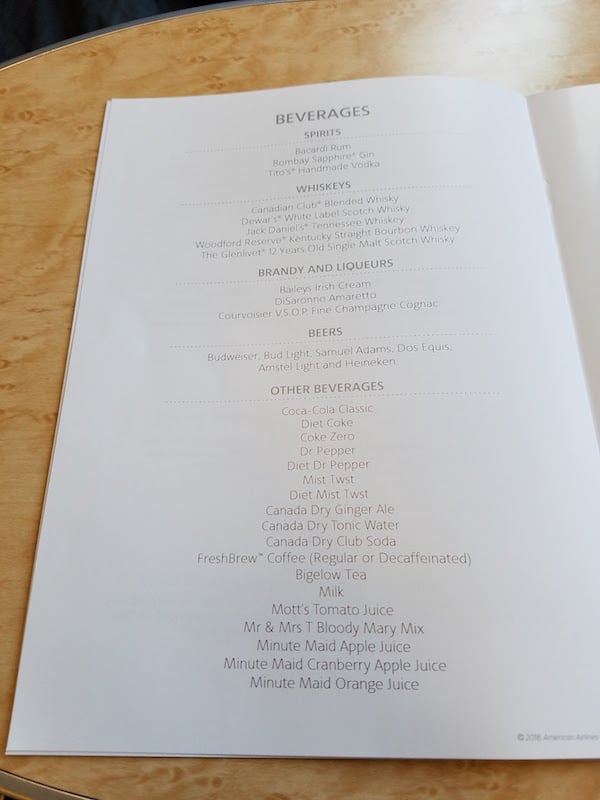 I was (surprisingly) served a pre-departure beverage (I chose sparkling water). 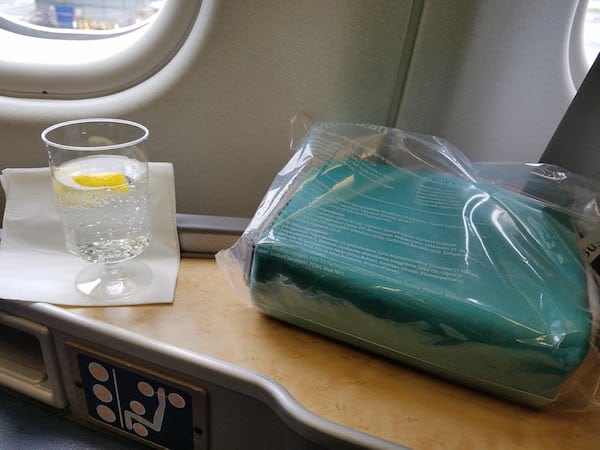 Soon after take off I was served champagne and warm nuts. 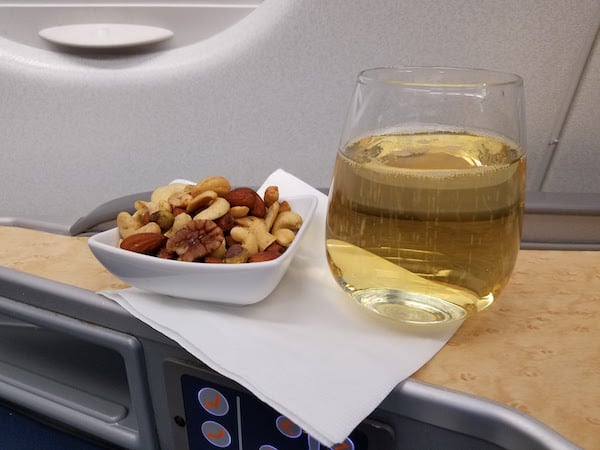 Starter was a small salad and melon with mozzarella and prosciutto.  I chose the small pretzel roll, yum! 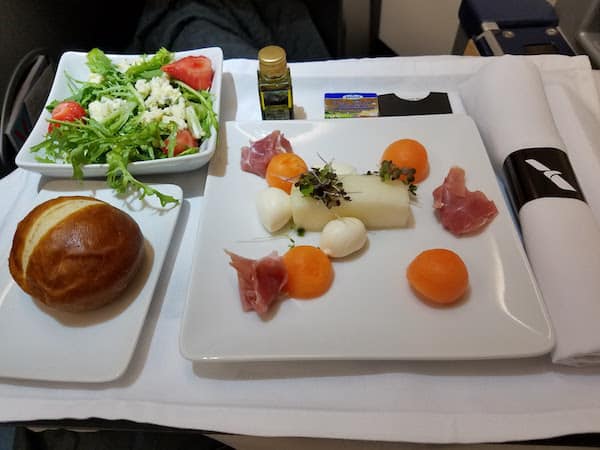 As I mentioned earlier, I had the cheese ravioli for my main course. 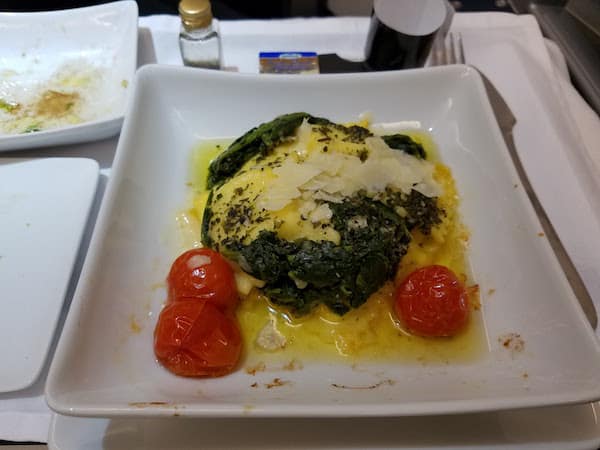 For dessert I picked the sundae, a classic AA offering. 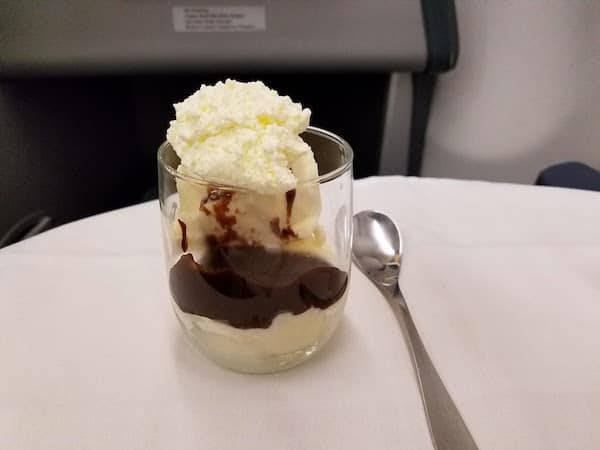 There were a few snacks in the galley during the flight but I didn’t partake.  Looked like some popcorn and chips as well as whole fruit.

Before landing I had the no-beef salad that was a healthy option after a weekend of flying.  Fresh mango slices were especially welcomed.  A small cup of dark chocolate pudding accompanied the salad. 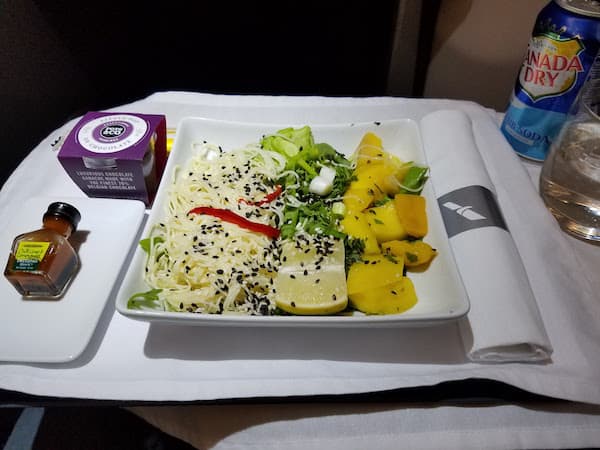 When we landed in Chicago it was quite nice to not have to go through immigration especially since I was connecting on to Seattle.  The entire plane deboarded directly into the terminal as if it were a domestic flight.  No need to go through security again to get on my next flight.  Hopefully TSA expands their Preclearance program (right now it is just in Abu Dhabi, Ireland, Canada and the Caribbean).

Overall the service on the American Airlines A330-200 Business Class DUB-ORD flight was probably the worst I have had on any flight; definitely the worst while flying in a premium cabin.  I understand that sometimes people have bad days, but when you are in the service industry you have to be nice.  That’s part of the job.  While I know flight attendants first duty is safety, customer experience is number two.

On previous AA flights I have typically had average service.  Never had anything fantastic and had a few other times where the FAs were MIA most of the flight.  But to have someone so rude was a new one for me.  I have to think that in any other industry someone like this would be fired.  I did put in two official complaints via AA’s website; we will see if I receive a response.

The hard product and food were all good, the only thing that redeemed the flight.  While the seat was old it did lie flat and I didn’t have anyone immediately next to me, which is all that I really care about.

With the changes in mileage earn with AA, I will probably stick to other options when flying international.  I do have a couple of already booked AA flights (purchased before devaluation); maybe those experiences will win my business back (hey, I can dream!)

Today I received an email response from American Airlines:

Thank you for contacting American Airlines.

Our goal for every employee is to provide friendly, courteous service. However, flight attendants have an especially crucial role in achieving that goal because they spend more time with you than any of our other employees. Since your correspondence indicates we did not do a very good job providing you with friendly service, I have forwarded a copy of your comments to the appropriate personnel at Flight Service for an internal review. By contacting us, you have given us the chance to improve — thank you. We will do our best not to disappoint you again.

Additionally, we are very sorry to hear that the entertainment system was not functioning properly on your recent flight. We know this entertainment is a welcome diversion and regret it could not be repaired in flight.

I was actually impressed that someone took the time to review my feedback.  They also offered me a $150 eVoucher for a future flight. 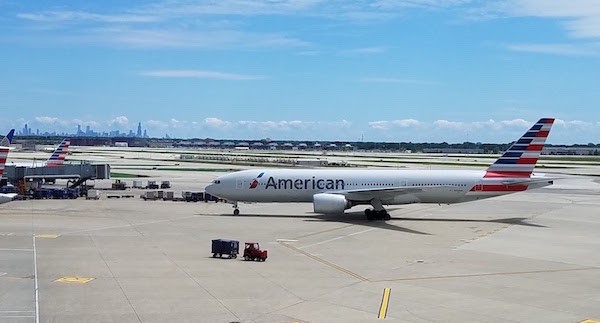 My American Airlines A330-200 Business Class DUB-ORD flight is the worst premium class flight to this day.  What is your worst flight story?