For the second time in about a month, I am flying American Airlines’ 777 Business Class transcontinental service from Los Angeles to Miami.  Both flights were mileage runs (the first to Haiti, the second to Cancun) and I specifically routed my trip through LAX to MIA so I could fly the product.

Both of my LAX-MIA flights left out of Tom Bradley International terminal.  The incoming flight is from Sydney.  American Airlines recently introduced a new, 9 group boarding process.  In theory this would make boarding less chaotic.  However, instead of calling each group one by one, the agents called for groups 1-5.  This meant that half the plane was trying to board at the exact same moment.  It led to some shouting and cursing.  Not a good start to the flight. 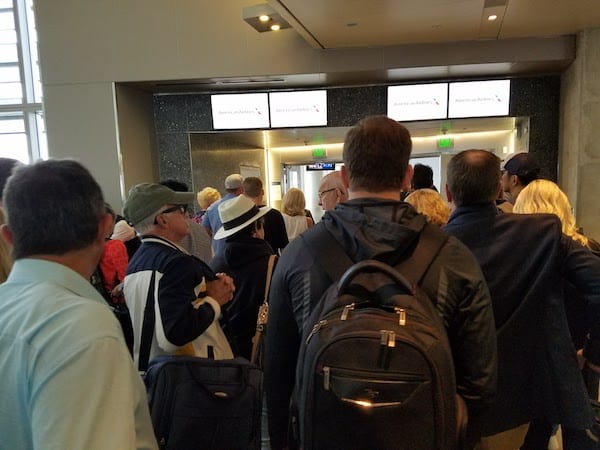 The Business Class seats on the 777-300ER that American uses for their LAX-MIA transcon flight are laid out in the reverse herringbone pattern.  This means that every seat has aisle access and all are lie flat.  The seats on our particular flight were quite new.  I picked row 4 as it is in the smaller Business Class cabin directly behind First Class. 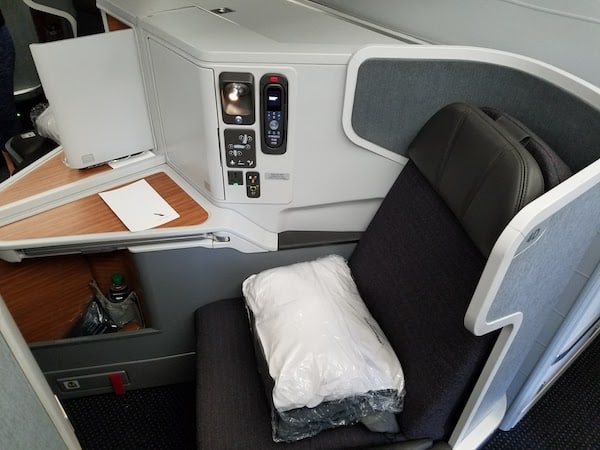 Each seat comes with a pillow and comforter.  There is plenty of storage including a small “locker” with headphones as well as an additional space that held a water bottle. 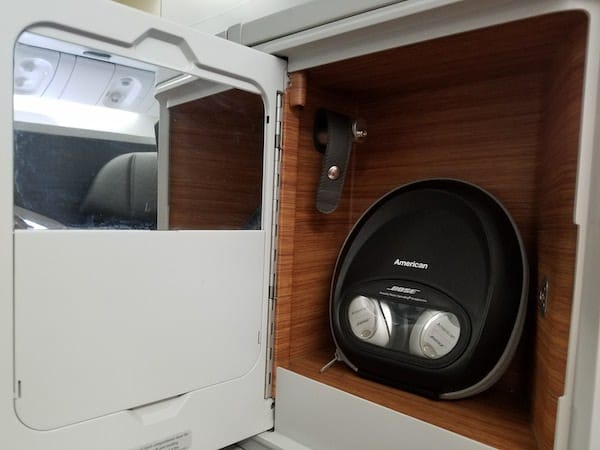 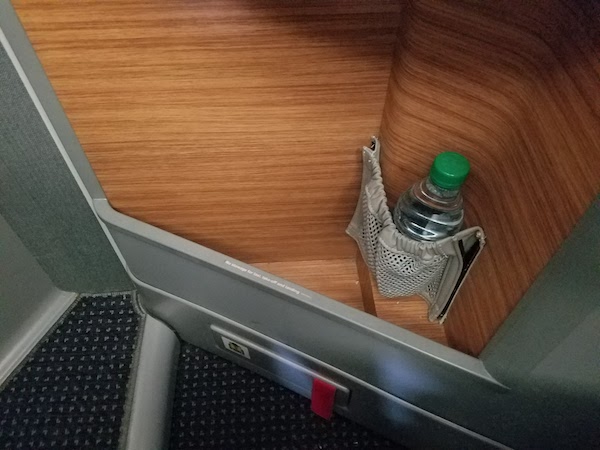 The panel next to the locker has a reading light, inflight entertainment controls, and seat controls.  No massage function on the seats.  There is also an overhead light in the ceiling.

The inflight entertainment screen pops out which makes it difficult to watch during take off and landing. 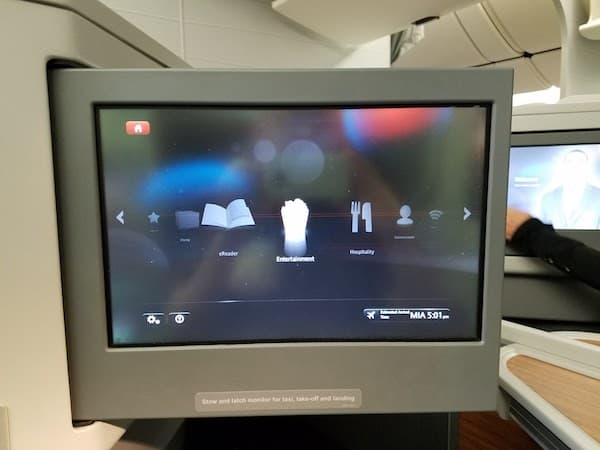 The amenity kit on AA’s transcon Business Class is a lighter version of their International Business Class kit.  It comes in a plastic fold up envelope.  Inside are earplugs, eye shades, socks, toothbrush and toothpaste, and lotions.  My kit back in July was blue where my more recent kit was gray. 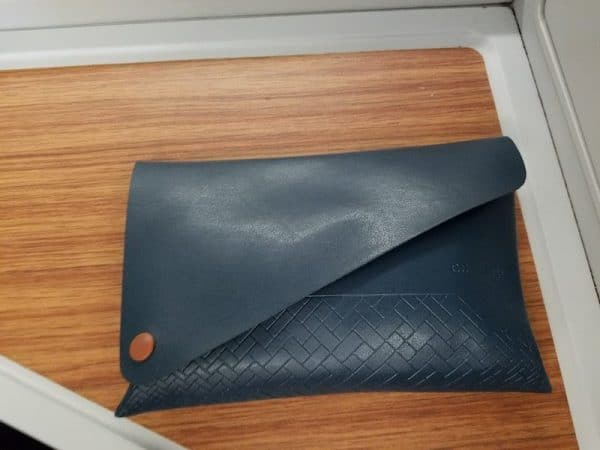 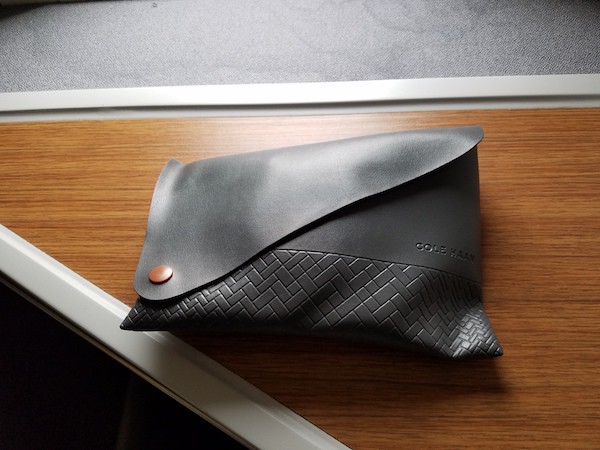 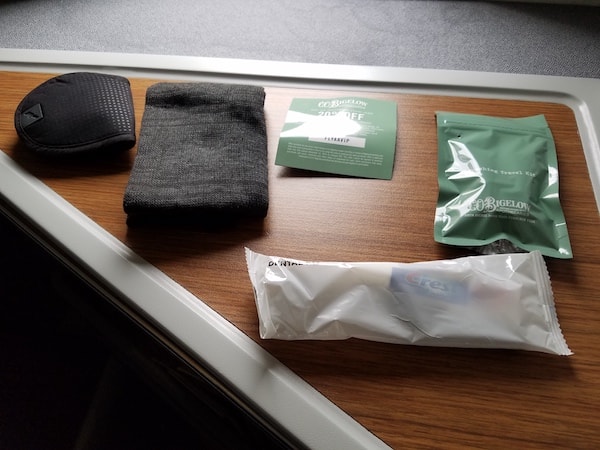 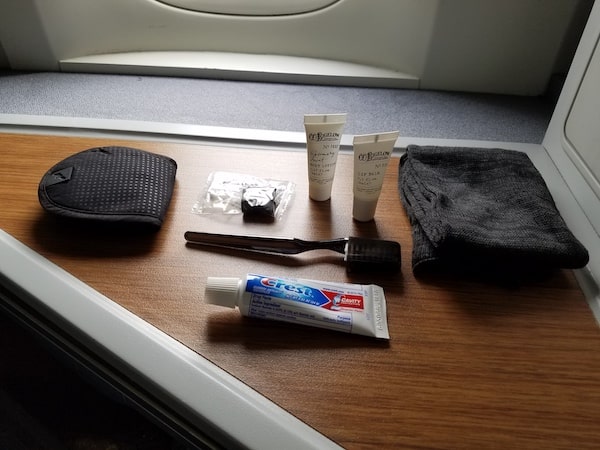 Pre-departure drinks were served with the option of water, orange juice, or sparkling white wine.

Soon after take off, linen placemats were delivered and drinks were served with warm nuts. 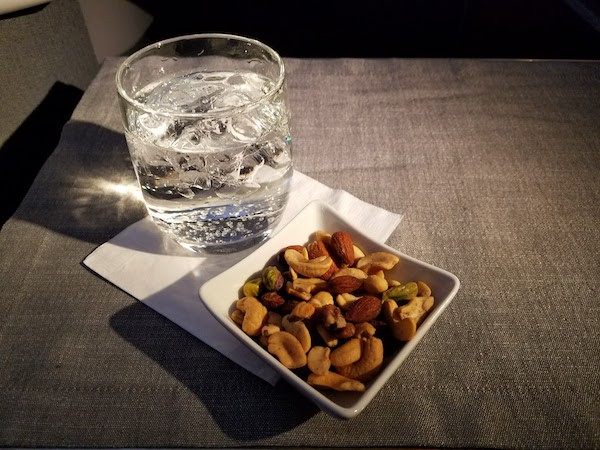 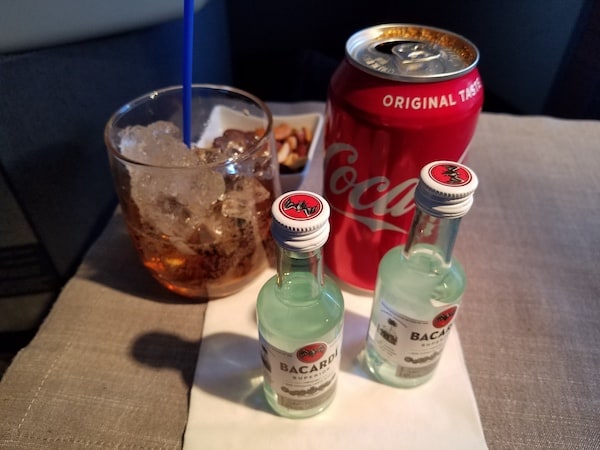 Lunch was served about an hour into the flight.  First an appetizer was served.  The edamame hummus was delicious.

Next the main course.  I much preferred the quinoa to the “lobster roll” which was some lobster meat and mayo on toast.

Followed by dessert — both flights I picked the ice cream sundae. 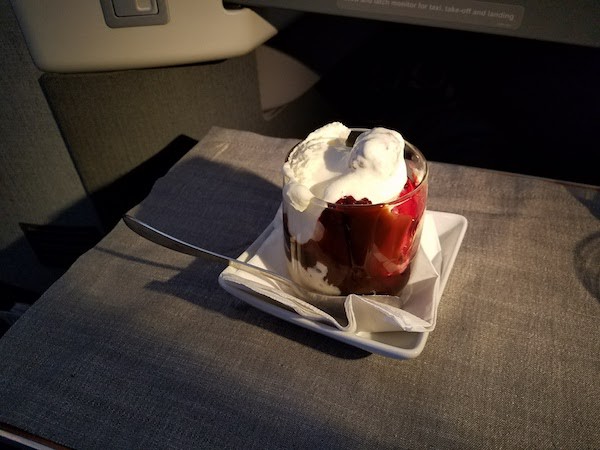 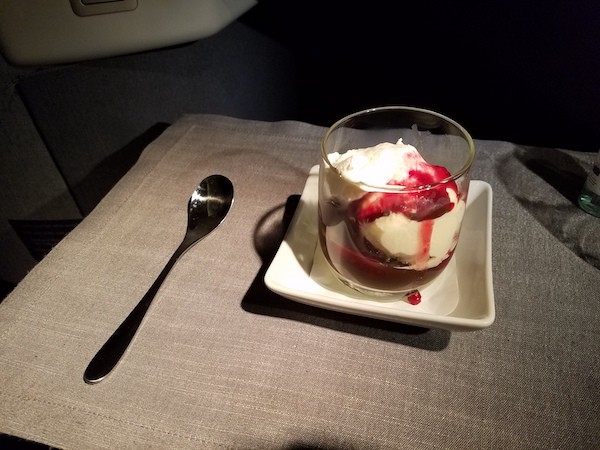 Warm cookies were served about an hour prior to landing.  There were also snacks available in the galley at any time. 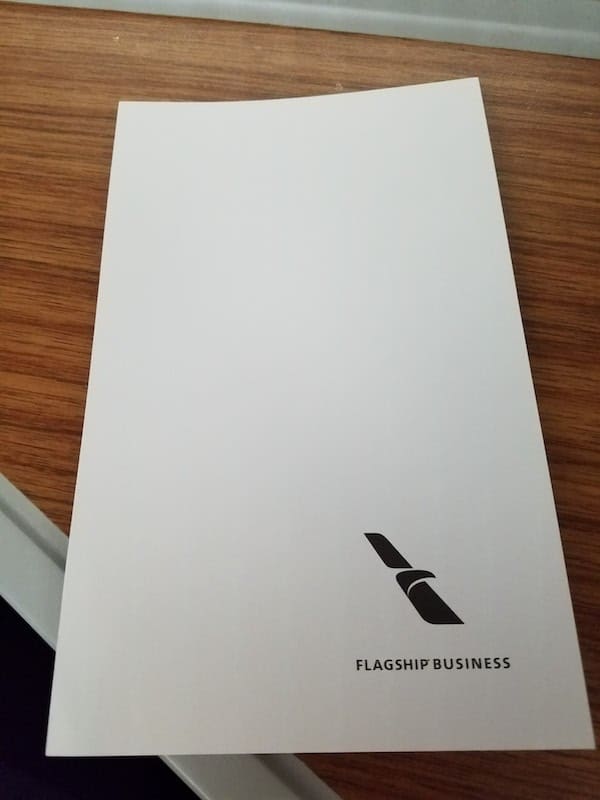 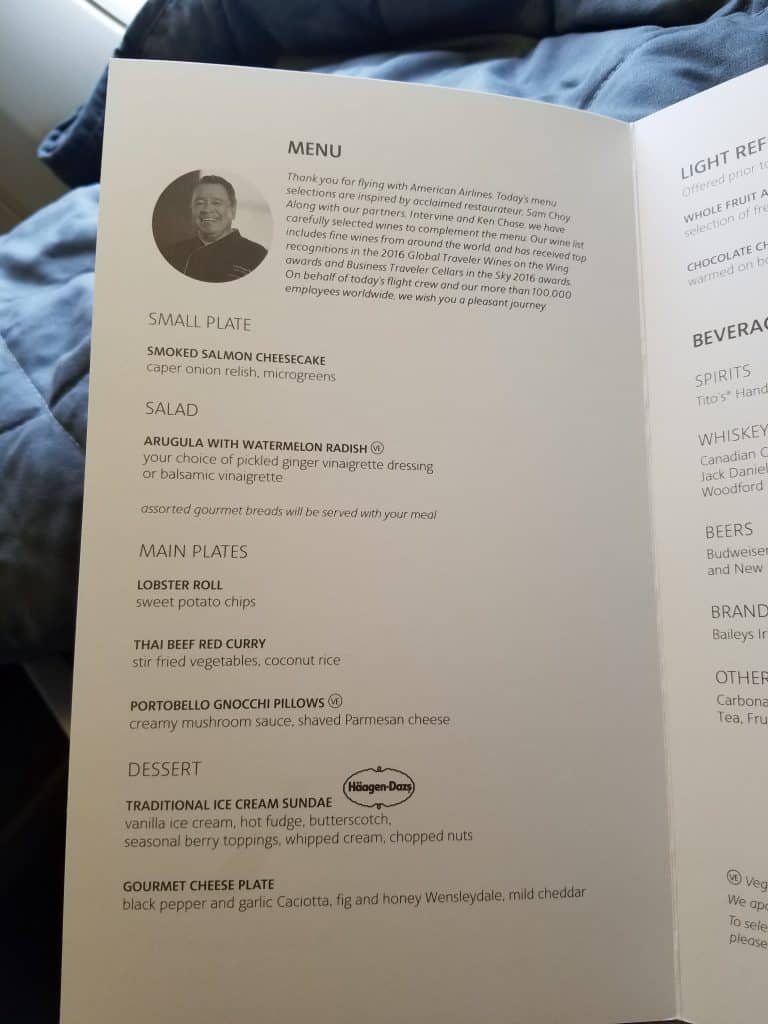 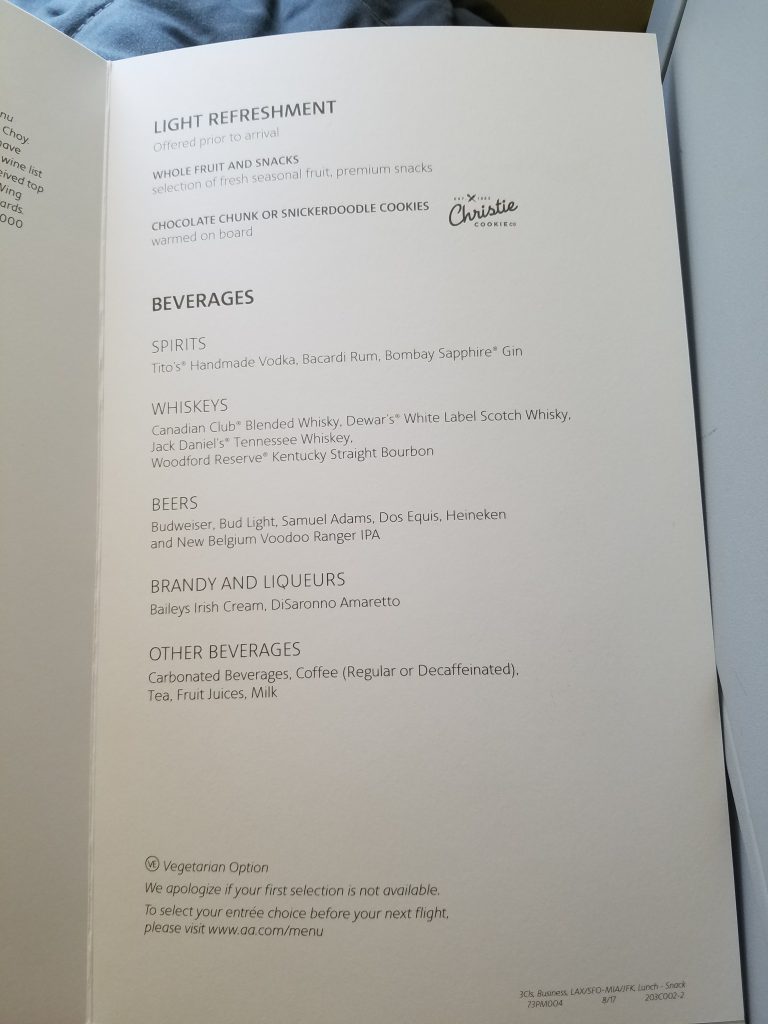 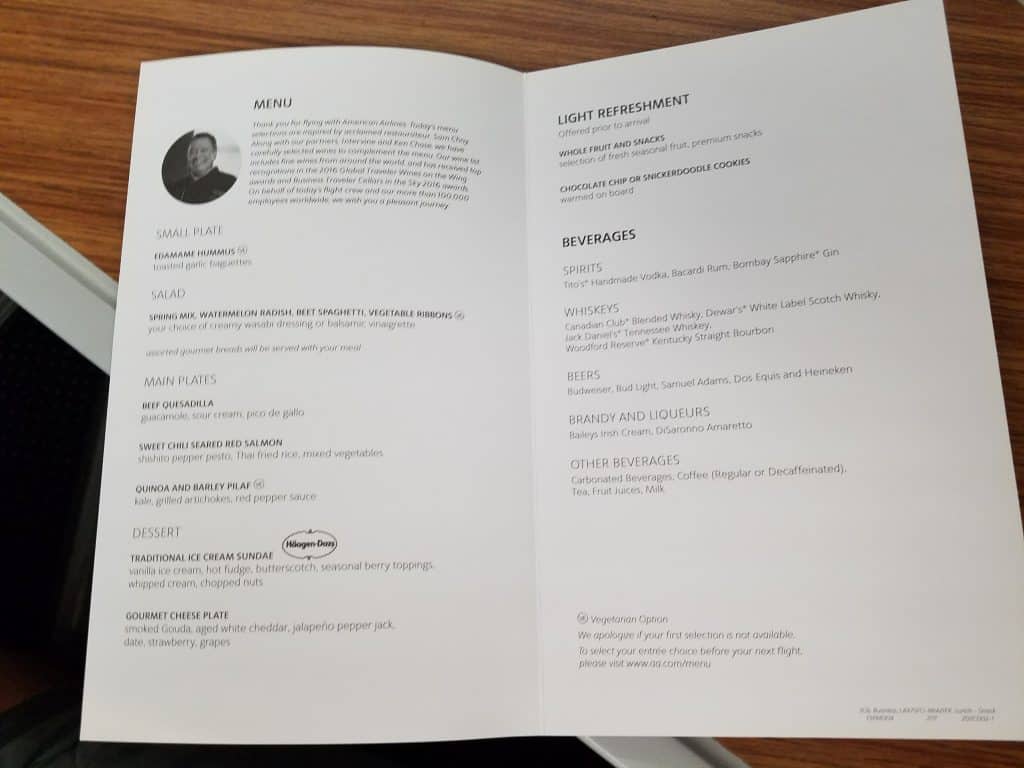 In LAX, I was able to access the oneworld Business Class Lounge as the flight departed from Tom Bradley International Terminal.  In theory, I should have also been granted access to the Admirals Club in MIA.  However, the staff there wouldn’t grant me access.  This is against AA policy — the staff were wrong.  However, I had a quick layover so it didn’t matter too much to me.  Still, AA needs to get their staff properly trained.

You should’ve received access to our Club in MIA. We’ve sent this to our MIA Club team for review. Our apologies for the troubles.

The ground experience for the American Airlines 777 Flagship Business Class domestic flights needs some work.  They need to train staff better in boarding procedures and on lounge access rules.  The inflight service, however, for both of my flights was better than expected.  The food was good and the seats are fantastic for a transcontinental flight.

The Flagship A321 product is unique and fun to try.  However flying a 777 domestically is also quite nice.  If American were to expand their Flagship domestic product, I might actually consider flying it aside from mileage runs.