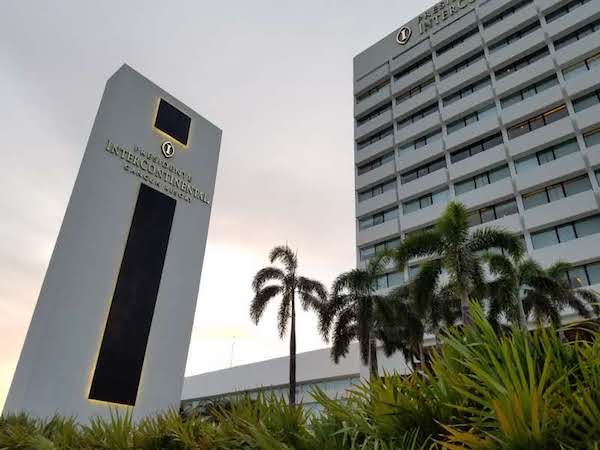 After three nights at the Zilara, the friends I was traveling with headed to Cozumel.  I had another night before flying home.  I wasn’t too thrilled at paying the full price for a night at an all inclusive, and I had an annual free IHG night from the Chase credit card.  The InterContinental Presidente Cancun daily rate was around $150; not the best use of the anniversary night.  But I didn’t have other plans to use it, so I booked it.

The InterContinental Presidente Cancun is located in the Zona Hotelera, north of the Zilara.  It is just west of the Convention Center and club district.  It is easy to walk to the entertainment center; I did the walk but wasn’t too impressed with the area.  It has direct beach access to Playa Cancun.

I arrived via Uber and was greeted at the front desk by staff.  I was asked if I had IHG status, which I did, and was walked to the concierge desk for check in.  It was explained that typically free nights are not eligible for upgrades, but that they had upgraded me anyway to a high floor in the tower.

The lobby is a large room with low ceilings.  The upper area has some seating while the lower level is the bar and check in area. 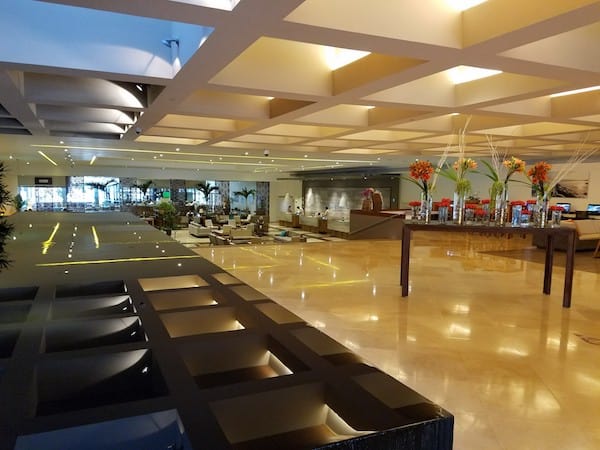 The InterContinental Presidente Cancun is all one building; however the 10 story tower seems like a more recent addition to the more sprawling low level wing of rooms.  The tower is accessed via a separate set of elevators.

I was assigned to room 851 at the InterContinental Presidente Cancun.  It is the first room off of the elevators, which I typically try to avoid but for one night I wasn’t concerned. 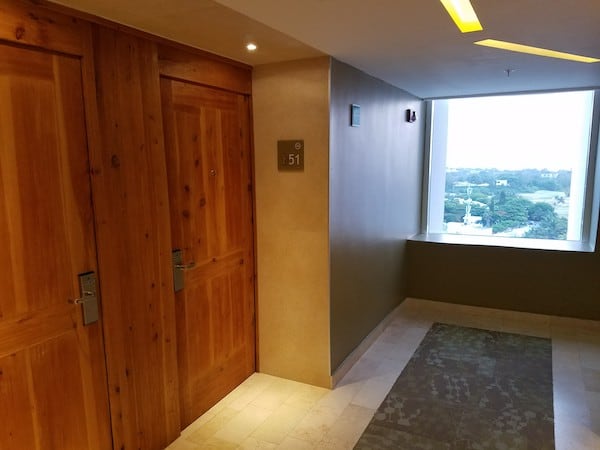 The rooms and common spaces look recently renovated and are in very good shape. 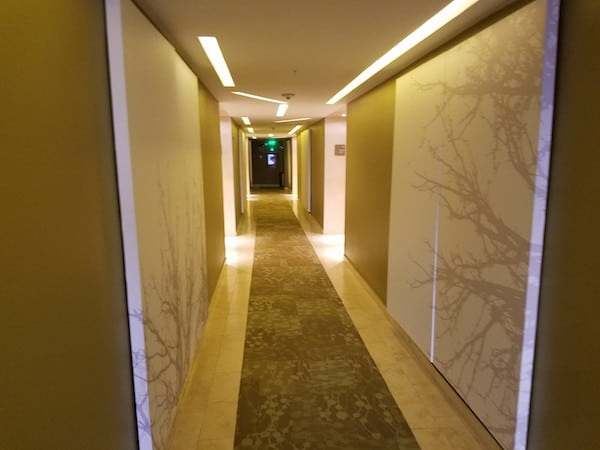 The room itself is quite small.  The bathroom is to the immediate right upon entry.  The rest of the room is just one, basic square room.  I had a Classic King Room. 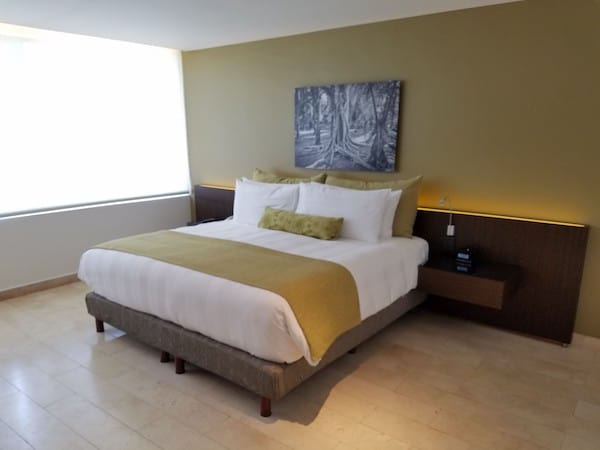 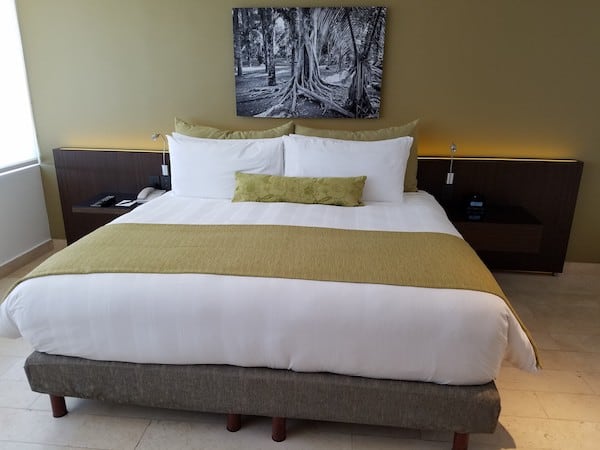 Overall the room feels very much like a standard business hotel.  There are some nice modern touches like a backlit headboard and recessed lighting.  The floor is tile; some might not feel this is as comfortable but in Mexico it has a cool feel and is so much cleaner than carpet.

Across from the bed is a desk and wall mounted TV. 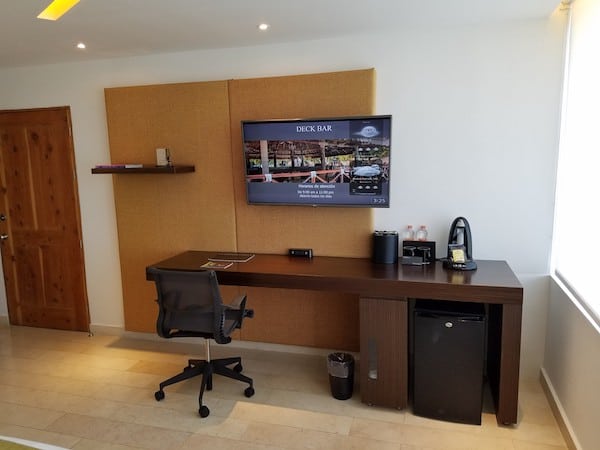 The mini fridge was locked during my stay; I guess you have to request to be given access to it.  There are two water bottles next to the coffee maker but they are not complimentary.

I am especially impressed by the black out curtains.  They are roller type shades.  The first set is opaque while the second set is complete black out.  There is even a bar along the sides of the window to make sure no light sneaks in where the shades meet the wall.  In the photo below, only the first set of shades are down. 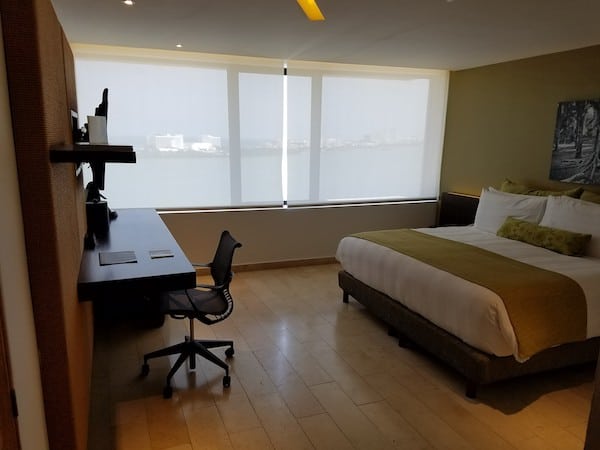 The view from 851 is of the lagoon (watch out for crocodiles!).  I could see back to the other hotels including Zilara. 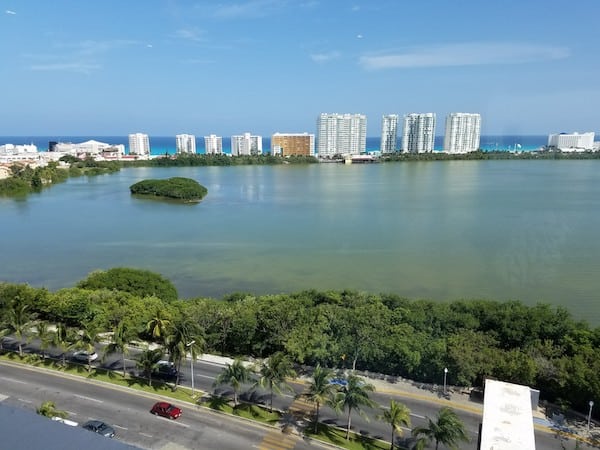 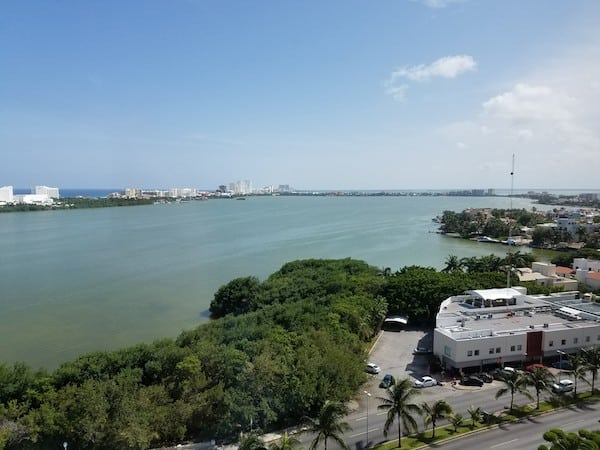 There is a small luggage rack against the wall opposite the window and near the bathroom.  The door you see on the right in the photo below is to a connecting room.  The bathroom is opposite that door, across from the mirror. 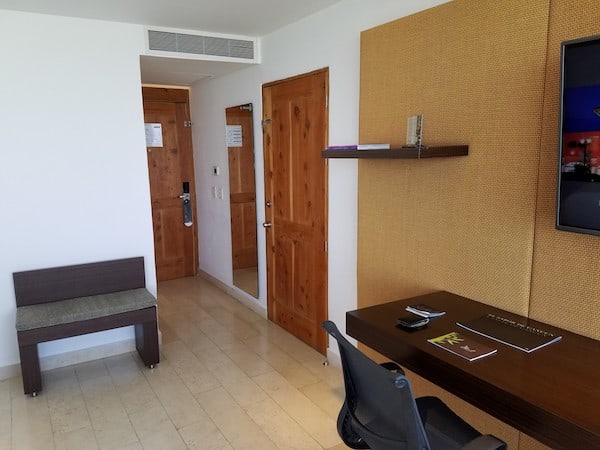 The bathroom in the guest room at the InterContinental Presidente Cancun is small but modern.  The first area has a large single vanity sink. 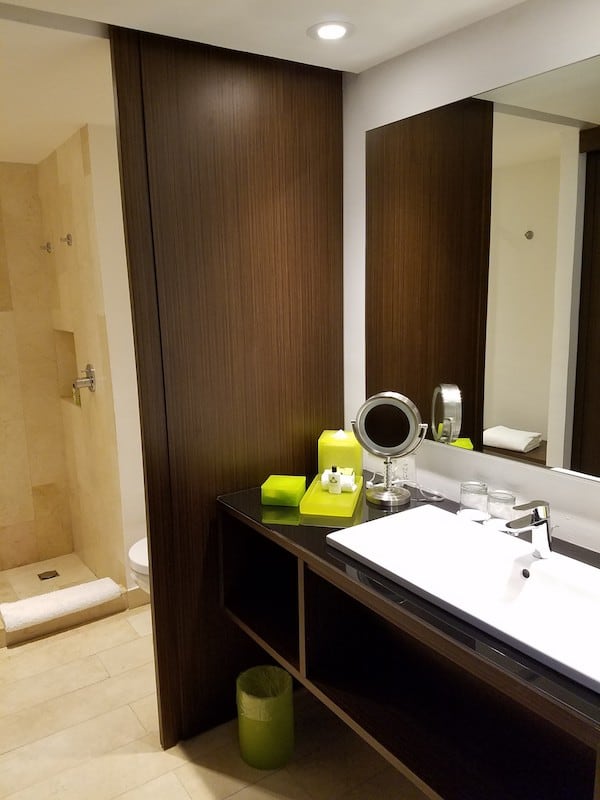 Opposite the sink is a large closet with robe and slippers, safe and iron board. 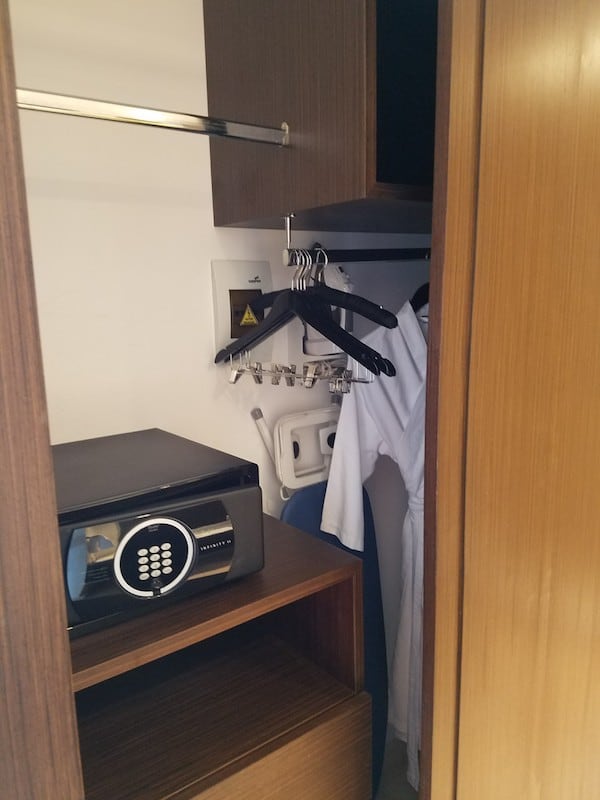 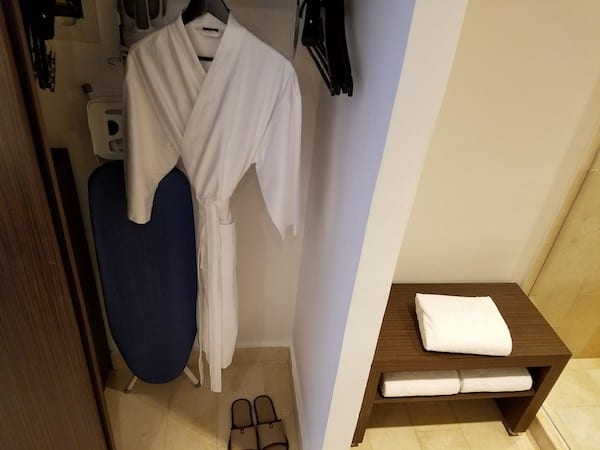 The second section of the bathroom has the toilet and shower.  The shower is enclosed with a glass wall but no shower door or curtain.   There is a built in rain shower head in addition to a handheld wand. 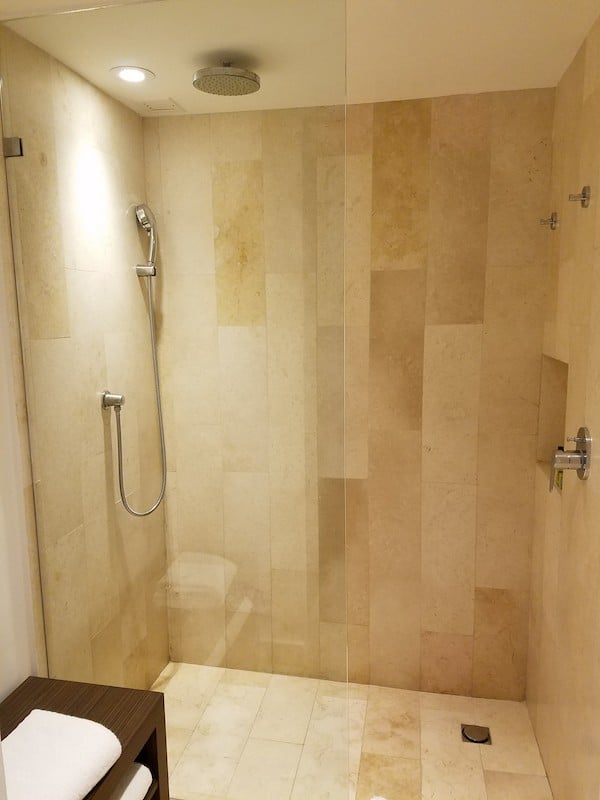 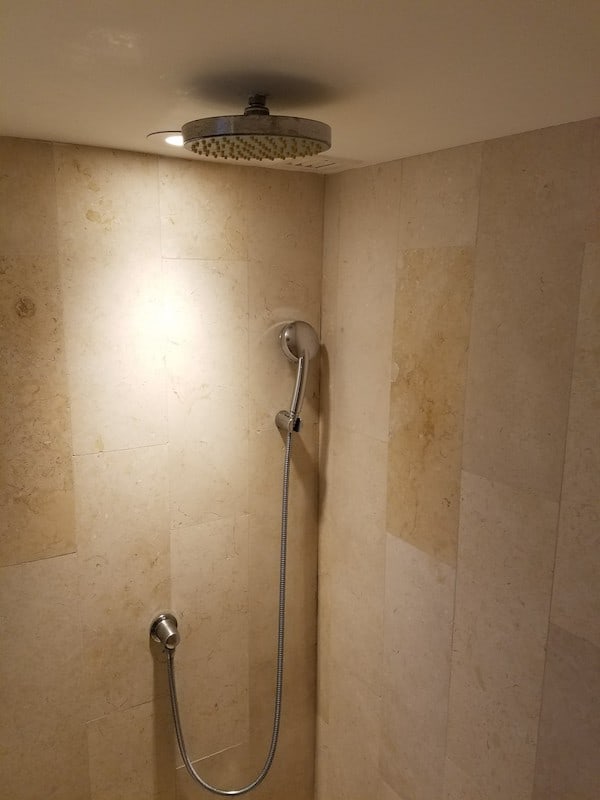 The bath amenities are the standard InterContinental Agraria brand that I also experienced in Singapore. 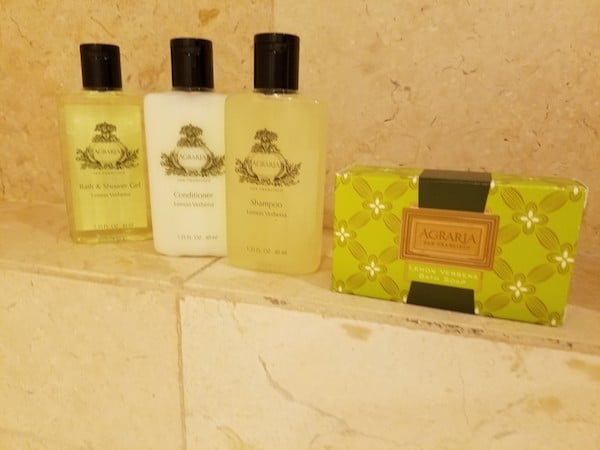 The InterContinental Presidente Cancun pools are accessible via a stair case at the back of the lobby. 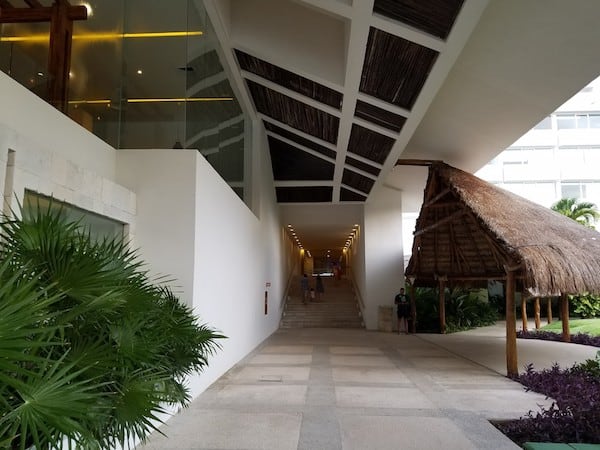 The main pool is quite large and features a set of whirlpools along one side.  During my stay, the pool had quite a few families at it. 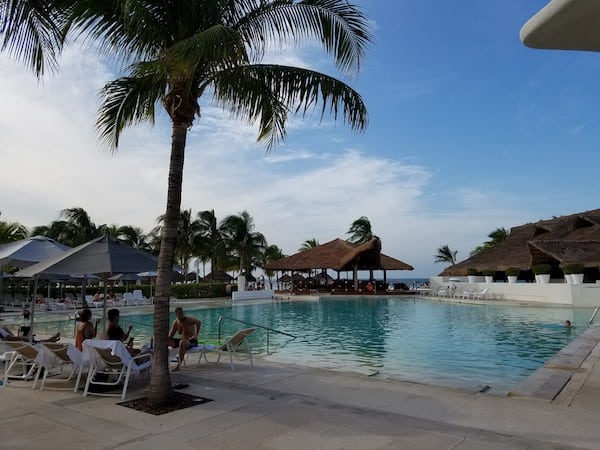 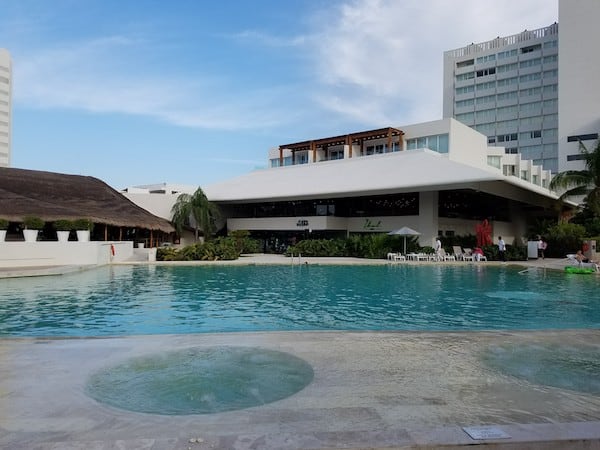 A second pool seemed to be more of an adult pool and was quieter. 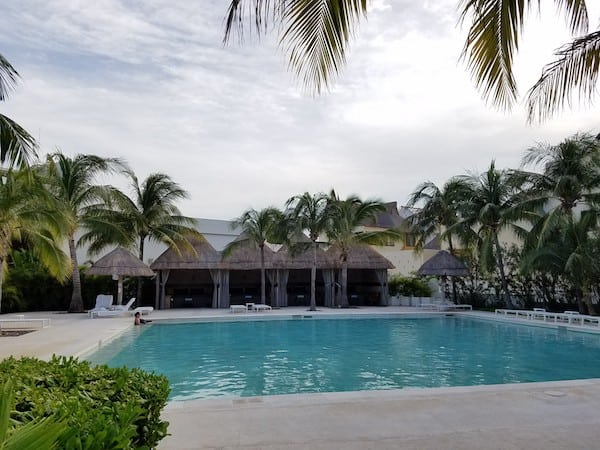 There were plenty of chairs along the quiet pool but most of the chairs were taken around the large pool.  In order to get towels, you have to stop by the pool concierge and check them out with your room number and return them at the same location to avoid being charged.

The spa is located under the lobby and is accessed via the pool level.  The gym is also located along the side of the pool.

The beach is just beyond the main pool.  There are a number of palapas for guest use. 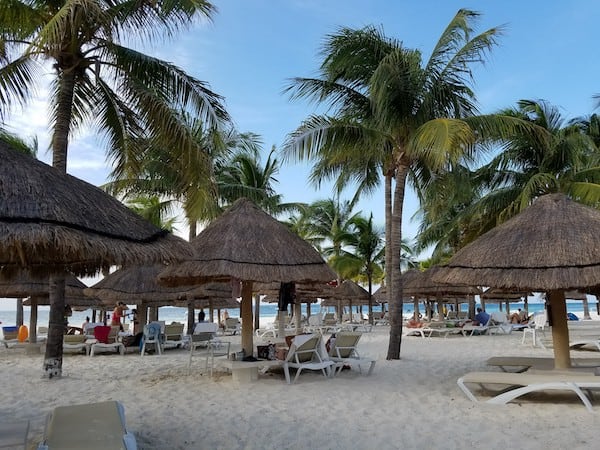 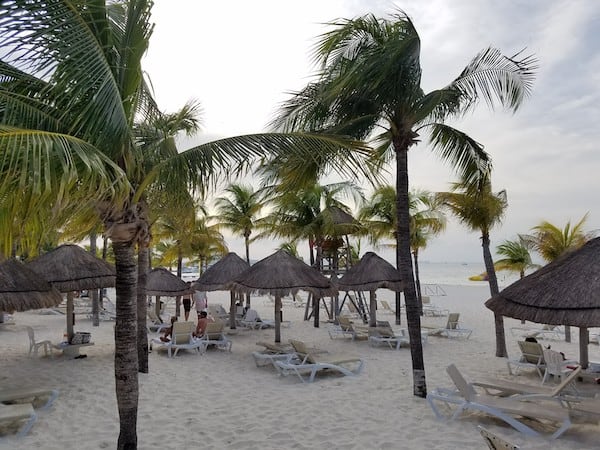 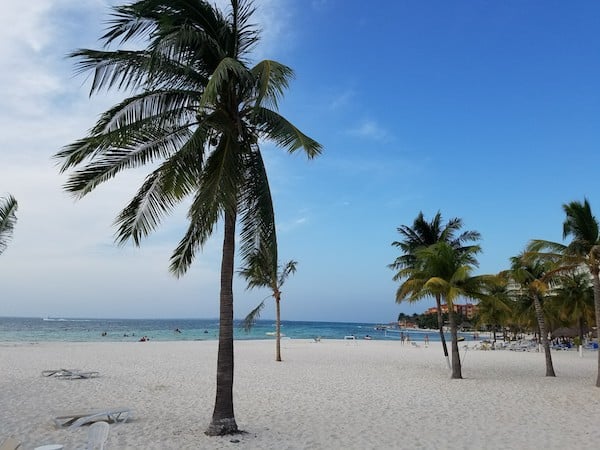 All the restaurants are located around the pool.  In addition, there is a bar between the pool and beach (in addition to a bar in the lobby).

I only tried one restaurant, the new Cafe Urbano.  Located above the spa, it is accessed by going down the stairs from the lobby to the pool, around the building, and back up a set of stairs.  It is a bit difficult to find.  It is the only air conditioned restaurant, the others are open air.  I was the only customer in the restaurant at any time during my meal.  I’m not sure how it affords to stay open. 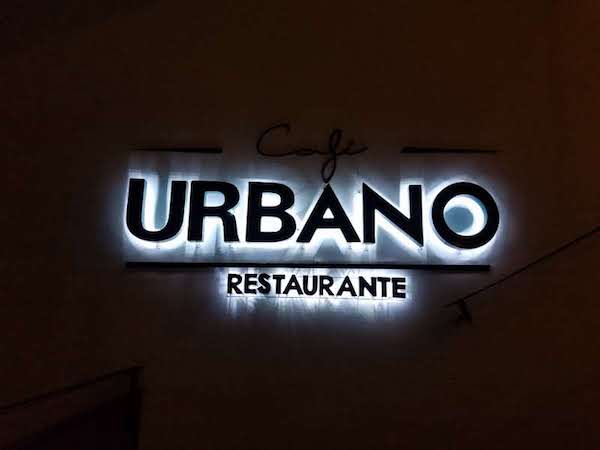 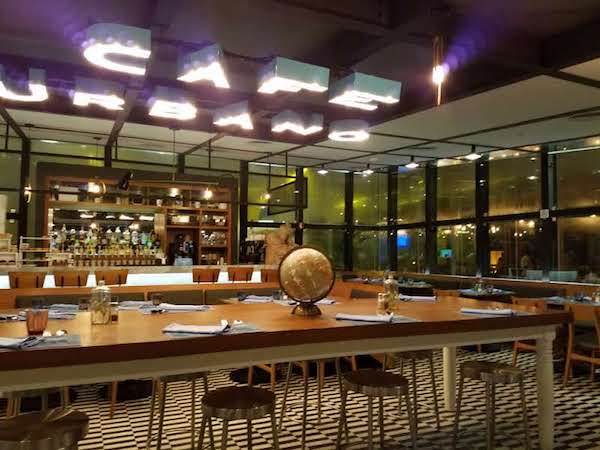 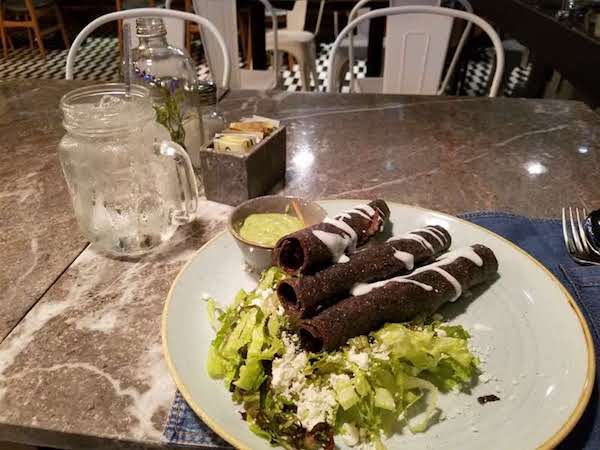 The food was good, but overall the restaurant seemed overpriced.

There is an executive lounge off of the lobby as well, but I did not have access to it. 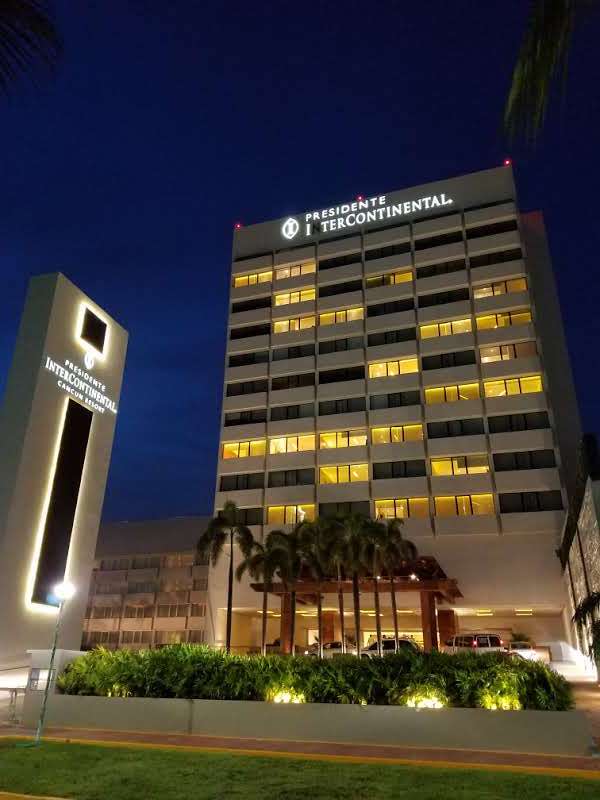