The shortest international leg of my round the world trip was Cathay Pacific First Class Bangkok to Hong Kong.  When I first booked, there was only one flight a day with Cathay Pacific on the BKK-HKG route that had a First Class, the others were two class aircrafts.  So naturally I booked the flight that had First Class availability as I was booking with miles and the cost was the same.  Reports on FlyerTalk have Cathay Pacific swapping aircraft and downgrading passengers on short international flights, so I wasn’t sure what I would be getting on my flight.  Luckily I did receive a true First Class on my relatively short 2 hour flight.

Cathay Pacific recently re-opened their brand new Business/First Class Lounge in Bangkok (opened mid 2015).  Checking in at BKK I was given a pass to visit both the BKK lounge and Arrivals Lounge in HKG.  I was able to go through the expedited Premium security and immigration in BKK and was off to the Lounge located on level 3 of the G Concourse. 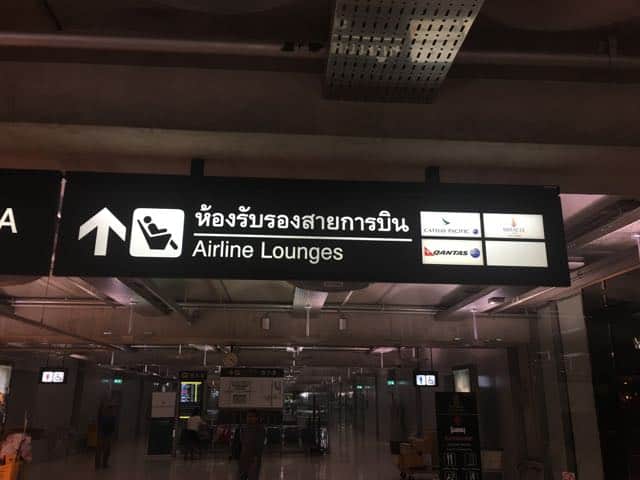 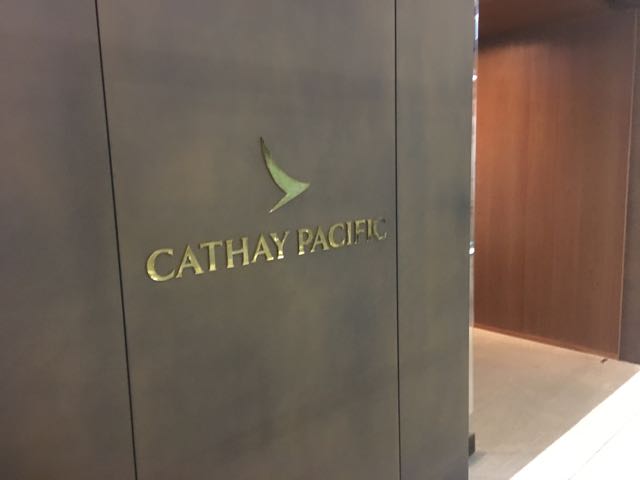 The mid century modern decor is similar to that of The Pier in Hong Kong.  You actually enter the lounge in the middle section.  To the left is the noodle bar.  Straight ahead is the small buffet.  To the right is the main seating area and bar.  Restrooms are just before the bar but do not include showers.

The noodle bar as a small menu of made to order light meals with plenty of seating.  After you order at the bar you are given a buzzer to notify you when your food is ready.  There is a small self service beverage area in the noodle bar room.  I ordered vegetarian Phad Thai that was delicious.  The dish you give you seemed to be pretty tame but you can spice it up with various toppings available at the bar.  The staff was helpful; despite being verbally assaulted by an upset passenger regarding not liking the quality of her food.  I had no problem with it. 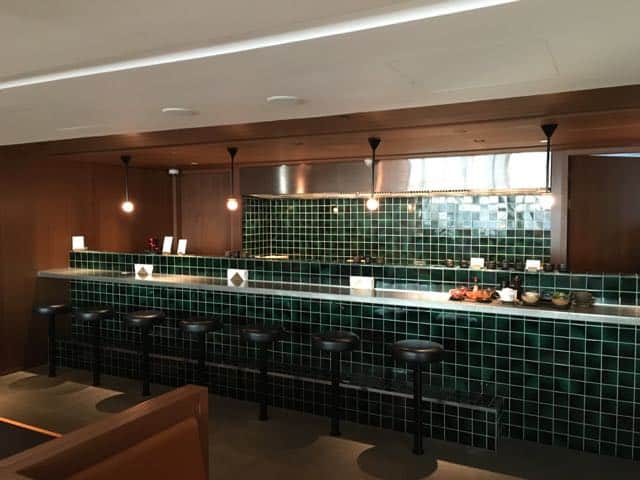 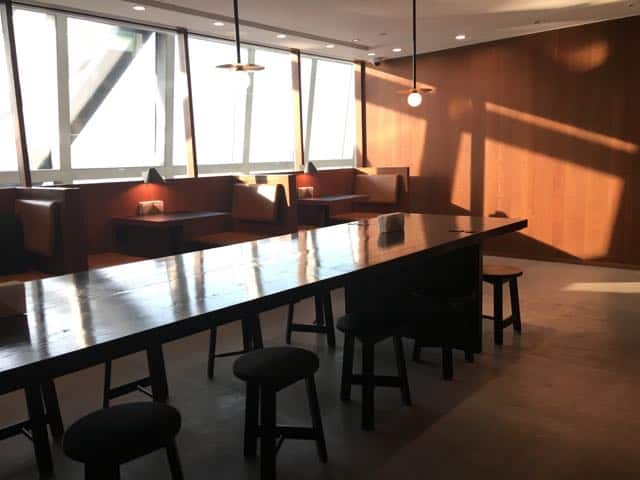 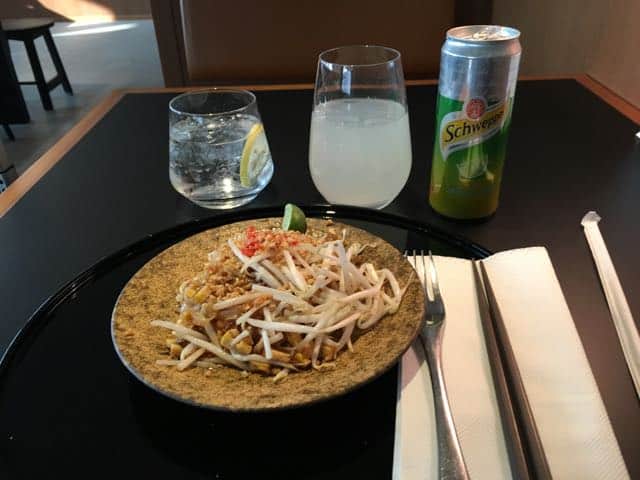 As a side, they had my favorite Schweppes Mango soda stocked in the self server beverage fridge.

I didn’t have much time before my flight but I did visit the bar for a drink.  I found the atmosphere to be very calm and comfortable. 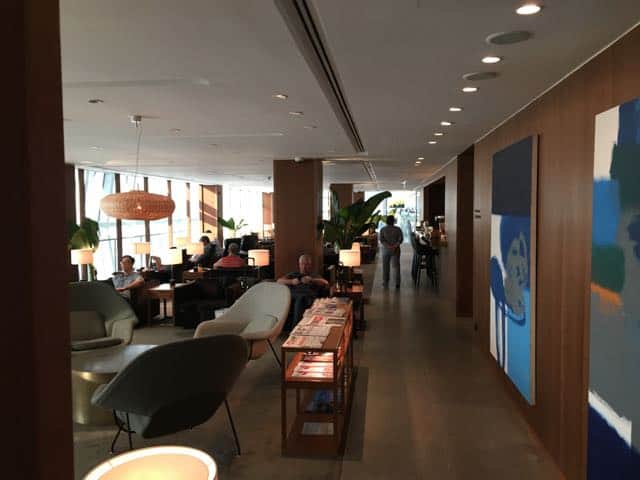 With less than 30 minutes until scheduled departure, our flight was called and much of the lounge cleared out.  When I got to the gate all of the Economy passengers had boarded (no need to interact with those riff raff 😉 and I was able to walk right on to the plane with no wait. 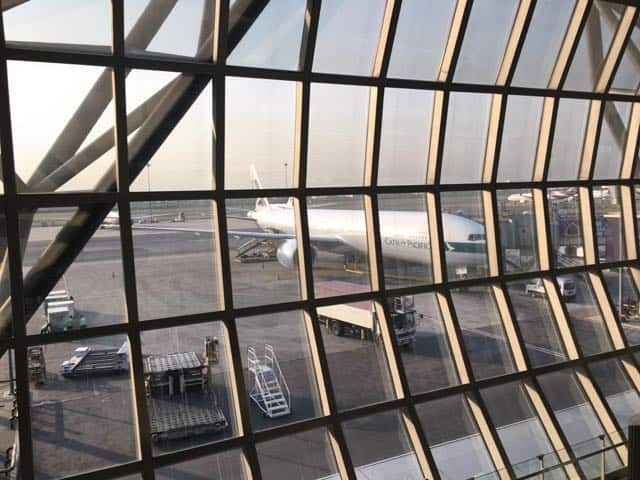 Still not sure if a plane swap could have occurred, I was relieved when I boarded the plane and saw the 6 First Class seats.  I was in seat 2A which had been recommended by One Mile at a Time.  As a side note on both my flights 2A and 2K were not possible to reserve online as they were held back as handicap accessible.  By calling in to their Hong Kong call center I was able to reserve 2A with the caveat that if someone in a wheelchair needed the seat I would be moved.  There is nothing that makes these seats more accessible; but perhaps due to some regulation they have to designate some seats in this way.

The reason that 2A is the best seat on the airplane is due to privacy.  The First Class cabin is a 1-1-1 configuration.  That means that there are two aisles in First Class.  The middle seats (D) open towards the right side (K) seats.  Therefore, the lefthand aisle is only used by the left side (A) seats.  Therefore, the entire aisle is only used by two people (1A and 2A).  The toilets are at the front of the plane, so for all reasonable purposes no one except flight attendants would ever need to walk past seat 2A.  I found that on both of my flights; this was the case.  The only people that ever walked by my seat were staff, typically to come to check if I needed anything.  Sitting in 2A feels like you have a cabin all to yourself. 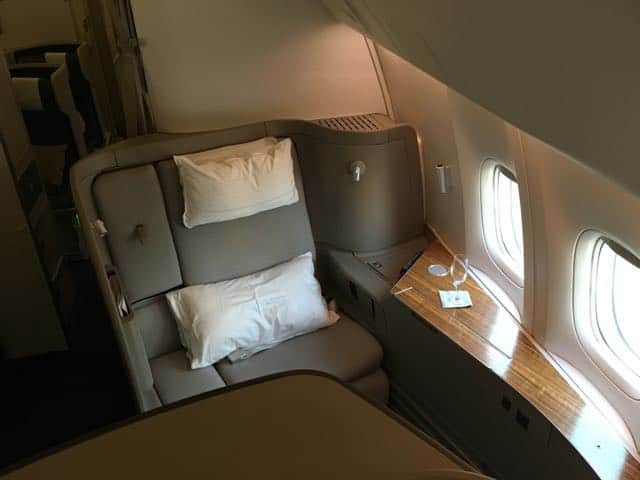 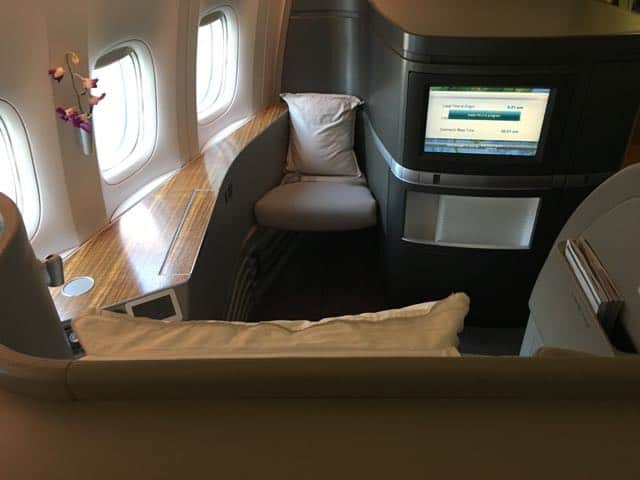 The seat has the same color scheme as the Lounge, wood finishes and stone green colors.  While not as over the top as Emirates First Class, I found the Cathay Pacific First Class seat to be much roomier and more relaxing.  Emirates is Las Vegas glitz while Cathay Pacific is Hawaii serene.  Both are amazing in their own way.

Each seat has three pillows; one on the ottoman, one attached to the head padding, and the biggest one loose at your back.  A large arm rest can be pulled down on one side while the other arm rest is fixed.  After take off the seat can be reclined into a fully lie flat seat (although on this short of flight I didn’t recline it fully).  There is built in back massage.  One over head light and two reading lights. 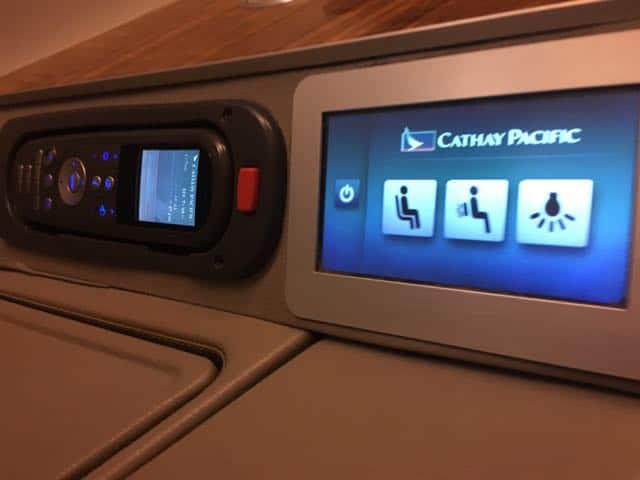 The inflight entertainment screen can be controlled by touch or with the remote at the seat.  The monitor can be adjust to just about any position for prime viewing. 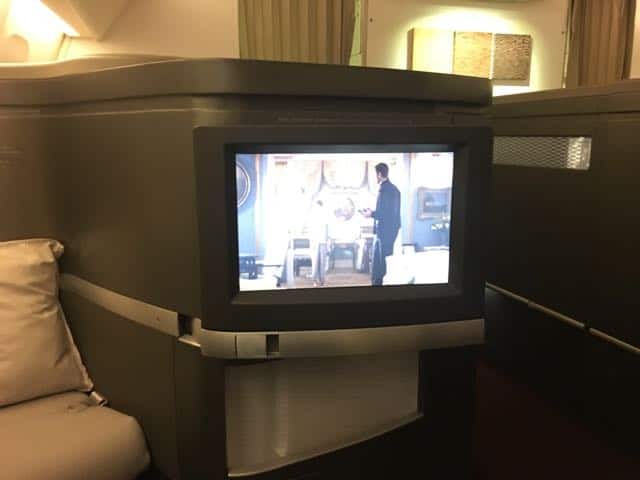 I was offered pre flight Champagne and was surprised that it was Moet rather than the Krug that Cathay Pacific is known for.  It was still delicious. 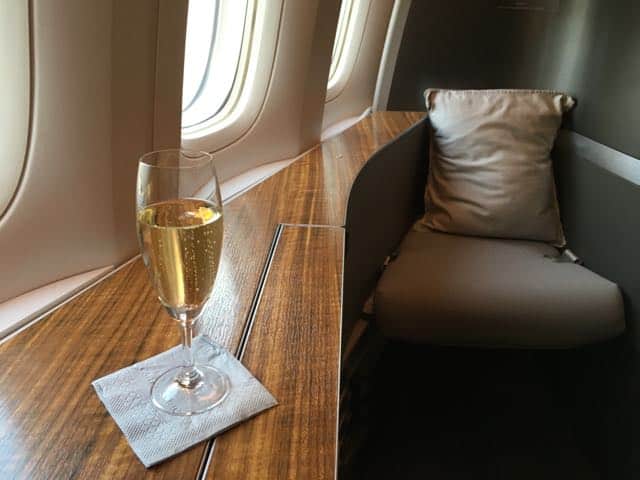 The four flight attendants that were assigned to the First Class cabin were extremely attentive.  Quickly after take off more champagne was poured and warm nuts were brought before meal service. 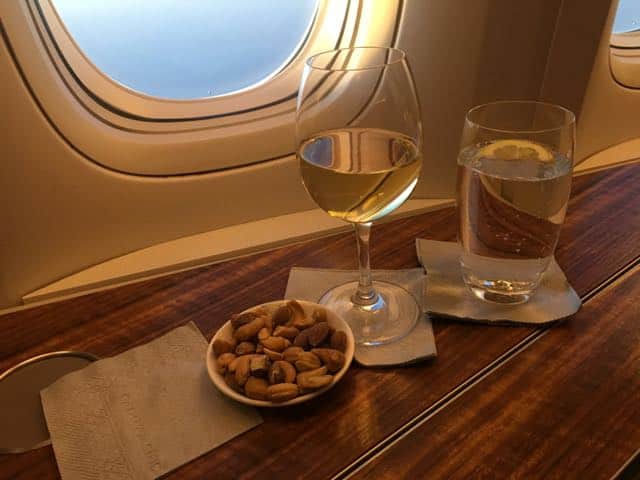 For a quick flight, the meal service was quite robust. 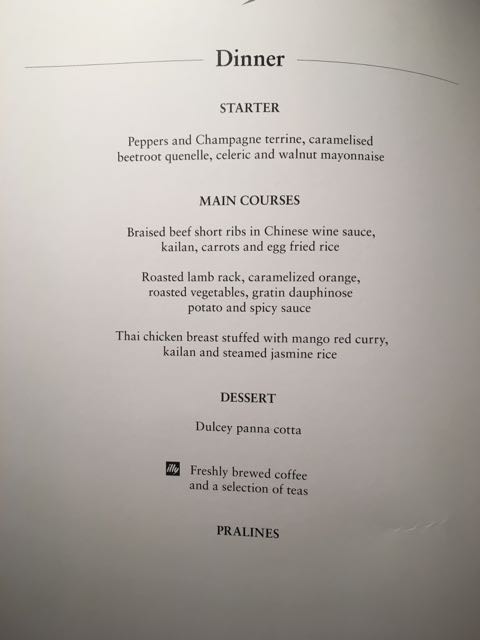 I ordered the Thai chicken which was absolutely delicious and would have been a tasty meal on the ground at any restaurant. 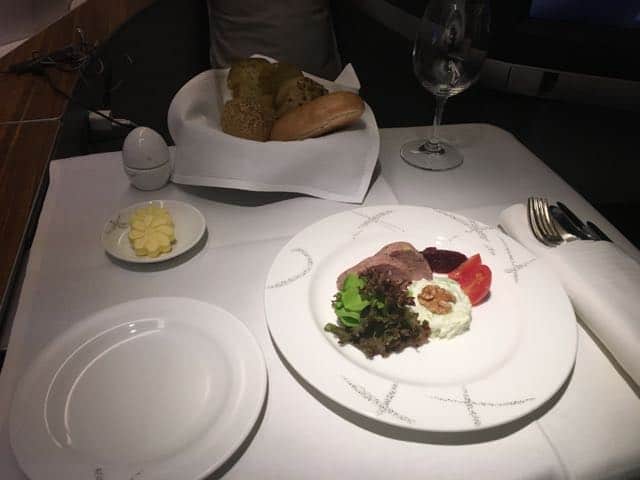 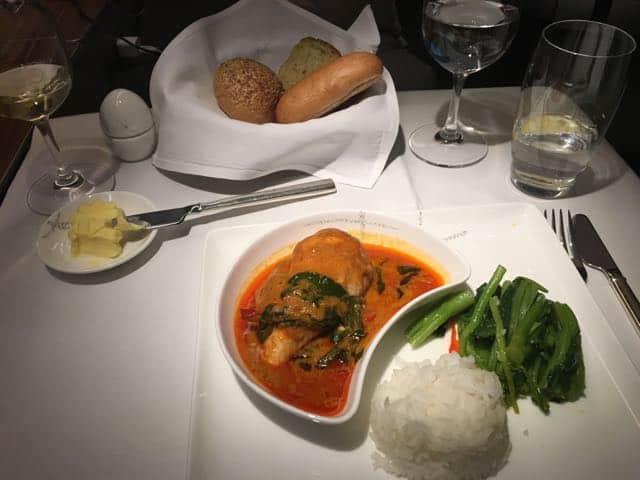 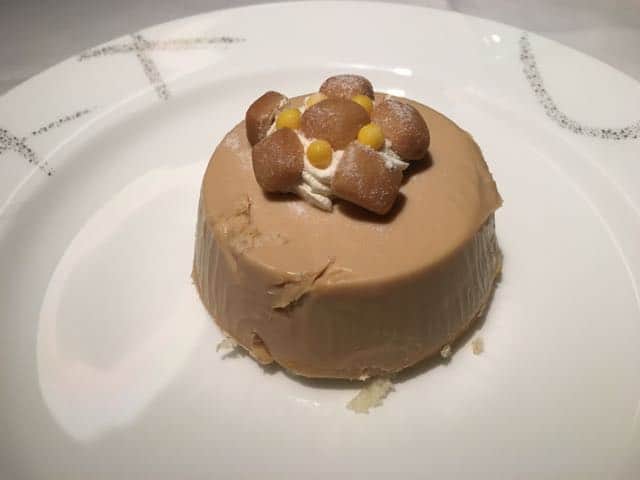 Our flight was slightly lengthened due to heavy traffic at HKG.  Once on the ground and before heading in to my hotel, I decided to visit The Arrival Lounge.

I did not need to visit the The Arrival Lounge; I was heading straight to my hotel.  However, I wanted to check it out and also grab some water.

The Arrival Lounge is located under the Airport Express train between Terminal 1 and 2 at Hong Kong International Airport. 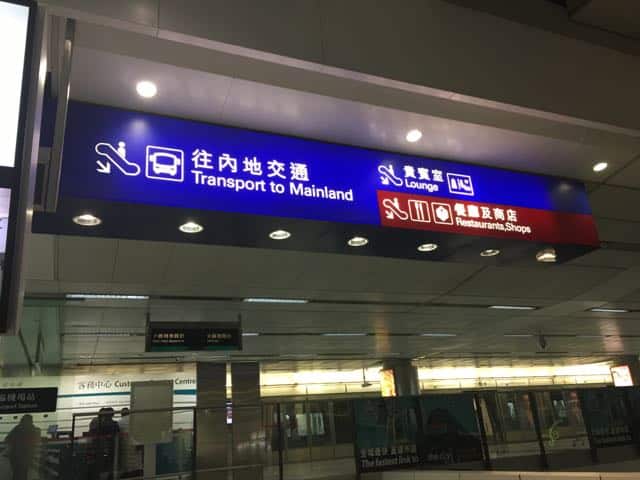 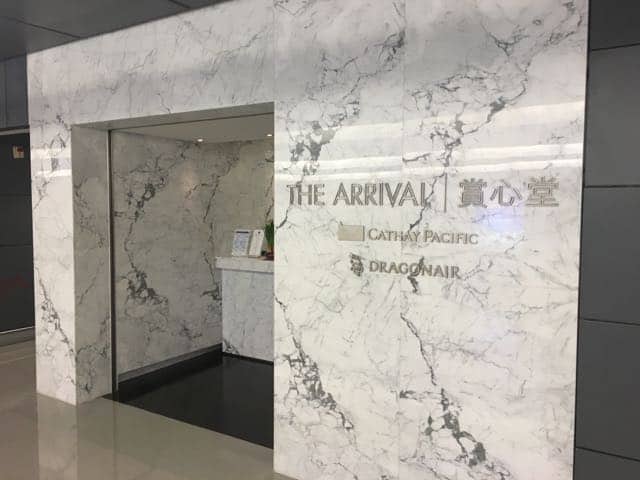 Inside is a reading area, buffet dinning area where you can also order a hot meal, and a long wall of shower suites.  The purpose clearly is a place to shower and freshen up before heading in to they city or to a meeting. 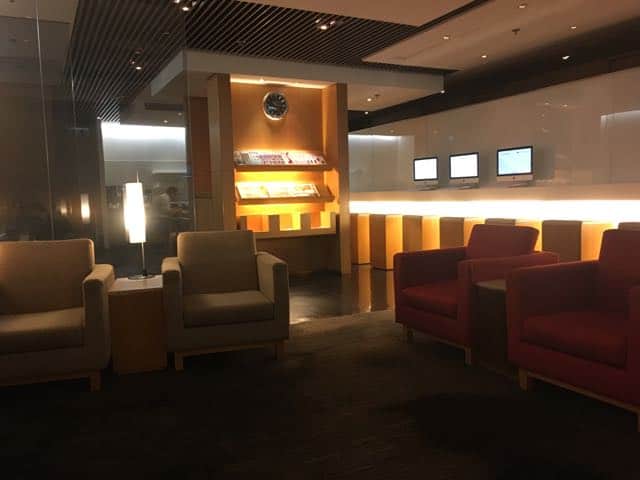 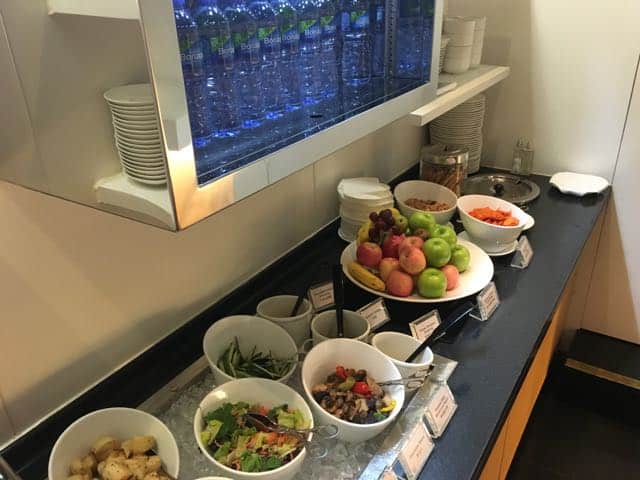 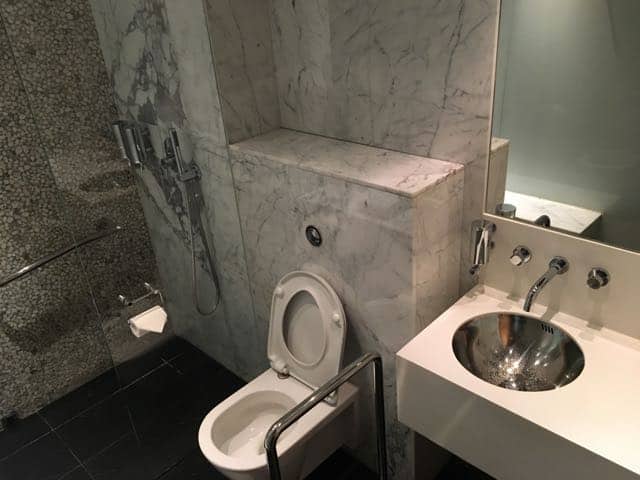 The decor is more stark whites than the wood and stone greens of the newer lounges.  When I visited there was only another two or three passengers so there was no wait for a shower suite.