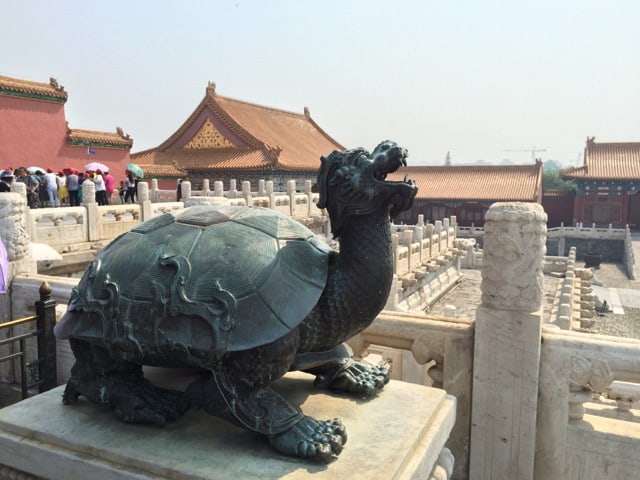 A few months back I got in on the sub-$500 round trip ticket to Beijing from Washington DC in American Airlines Business Class.  I purchased the tickets; and then purchased my positioning flight to DC from Seattle which ended up costing (slightly) more than the ticket to Beijing.  I would have from 2:00pm on Friday until 10:00am on Sunday.  A very quick weekend in Beijing.

I started in Seattle on Wednesday afternoon.  I spent some time in The Club at SEA before my flight; free access that I had through my Citi Prestige card.  I wanted to try out this new(ish) lounge that is tucked WAY out of the way at the end of Concourse A.  They actually had some good packaged snacks and bottled drinks and open bar.  In terms of snacks, it was the best lounge of my trip (the rest I visited were Admirals Clubs).  I also think it is better than the Alaska Board Room although it is in a much worse location. 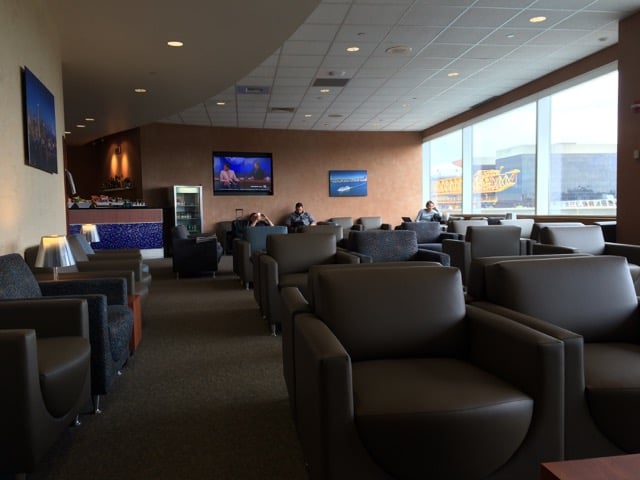 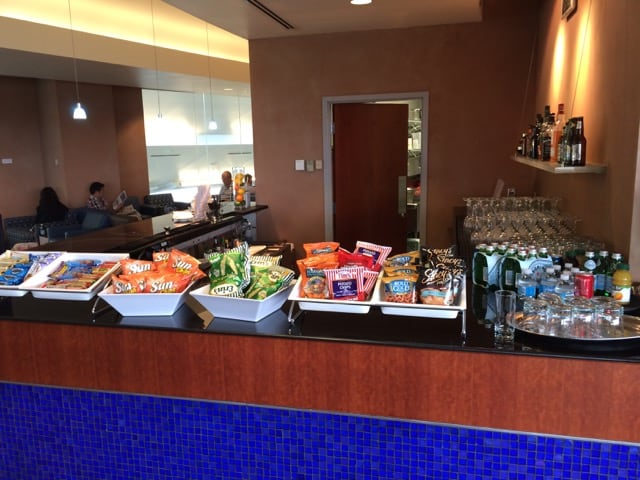 I then flew economy on Alaska Airlines to DCA but at least was in an exit row so had some extra leg room.

I arrived in DC at 10:00pm and caught the shuttle to the Hyatt Regency Crystal City.  I was given a suite upgrade and my room service dinner was comped.  My flight was at 7:00am the next morning so I didn’t have much time to enjoy the hotel but I did catch a bit of the final Late Show with Letterman. 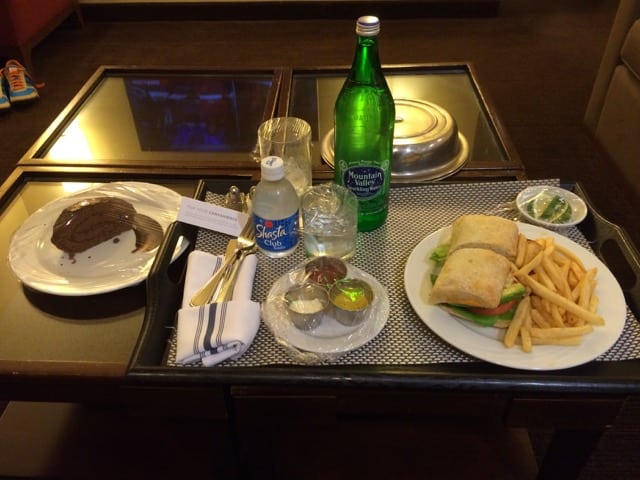 I spent the morning before my flight in the Admiral’s Club in Terminal B.  A standard size lounge with views of both the check in area and the runway.  Standard breakfast staples of bagels, yogurt and some whole fruit were provided. 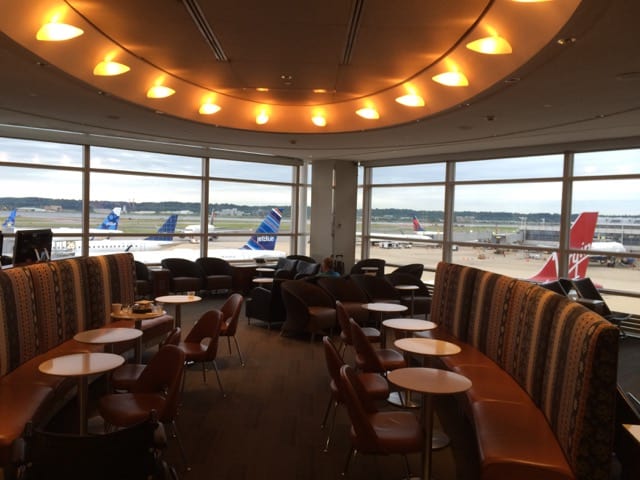 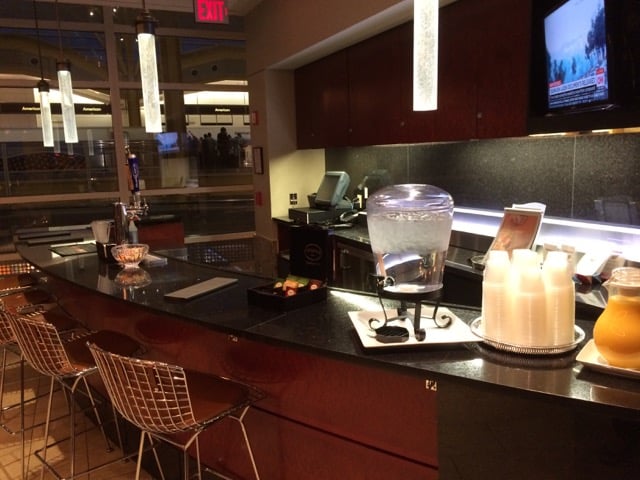 I was in purchased First Class for my flight from DCA to DFW.  I preordered the French Toast which was good enough.  It had been years since I had flown American Airlines (I was crediting my flights to Alaska) and I was less than impressed with the service.  But it wouldn’t be as bad as the service on the next flight. 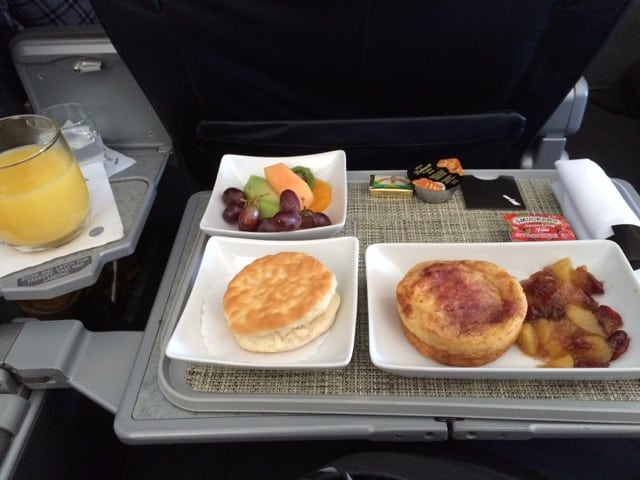 We were an hour delayed so I was a bit worried about having enough time to connect in Dallas but it turned out to not be a problem at all.

The flight parked in the gate next to our plane to Beijing so it made the connection simple.  I even had time to go upstairs to the Admirals Club in Terminal D.  It was a large lounge but I had a tight connection so I was only able to get a mimosa with Prosecco before needing to head down to board my next flight. 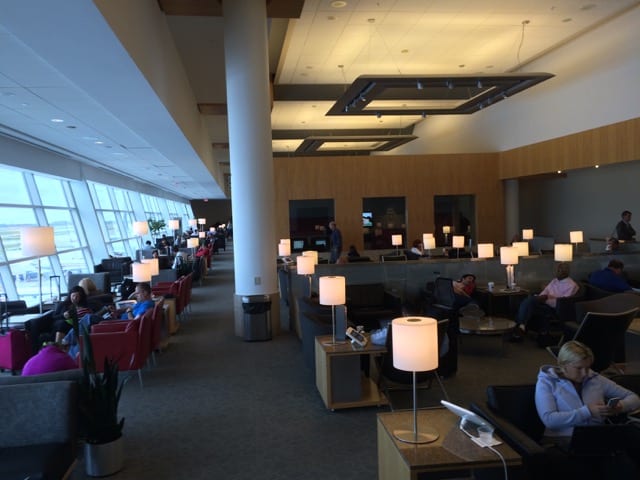 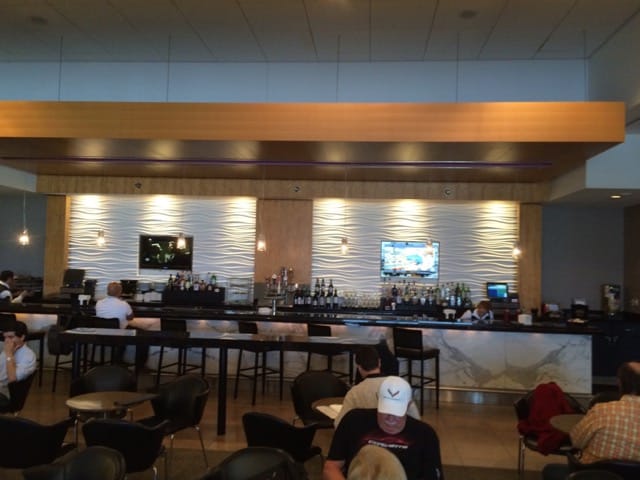 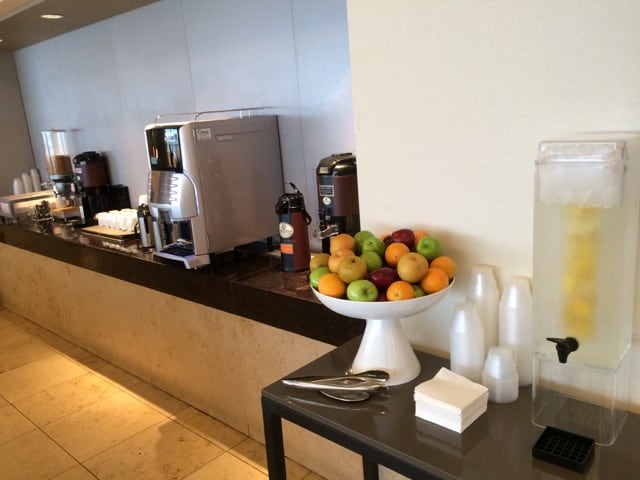 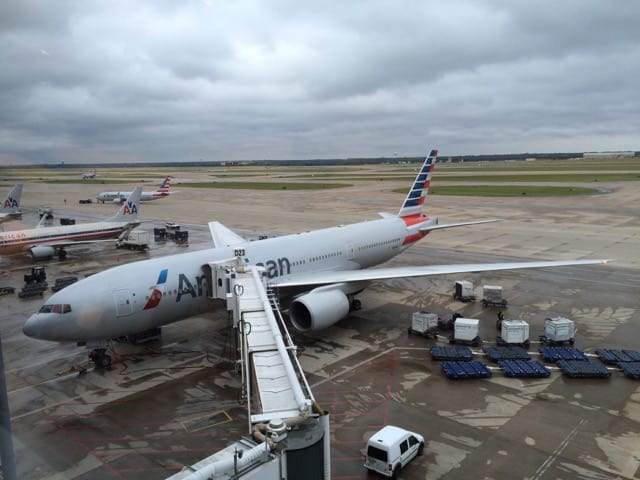 I am usually an aisle guy on planes, but decided to opt for a window seat.  I selected 8J as it is the first row of Business Class on the AA 777 (in the older configuration).  Row 8 (just behind the jetway in the photo above) is just two seats and they are in a little “nook” somewhat separate from the rest of the cabin.  It makes for a more quiet and private flight.  Being on the window made it tricky to get out when my neighbor had his seat in bed position, but not impossible for someone tall (I am 6’1). 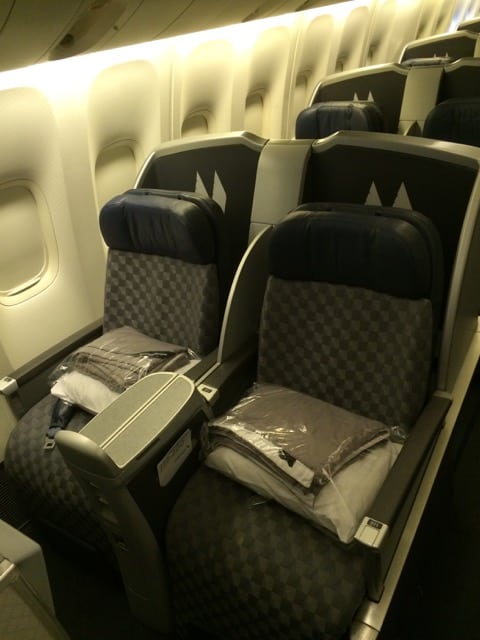 I would describe the seats on the older 777 American Business as a dentist chair.  Comfortable and able to recline in different positions, but definitely not a bed.  You can never get fully flat, although I don’t think it is as bad as other bloggers make it out to be.  It is still miles ahead of Economy.  The older 777 seat configuration in First is 1/2/1, Business is 2/3/2, and in Economy is 2/5/2.  It looked pretty miserable in the back.

Each passenger in Business gets to borrow a blanket, pillow and pair of Bose noise canceling headphones (that the flight attendants were VERY diligent about making sure they got back).  Also provided was a pair of slippers and amenity kit that included socks, earplugs, eye mask, socks, tissues, pen, and Red Flower chapstick and lotion.  Not pictured was a package of tissues and headphone pads.  Each amenity kit was themed with a different airline that has been absorbed by or merged with American. 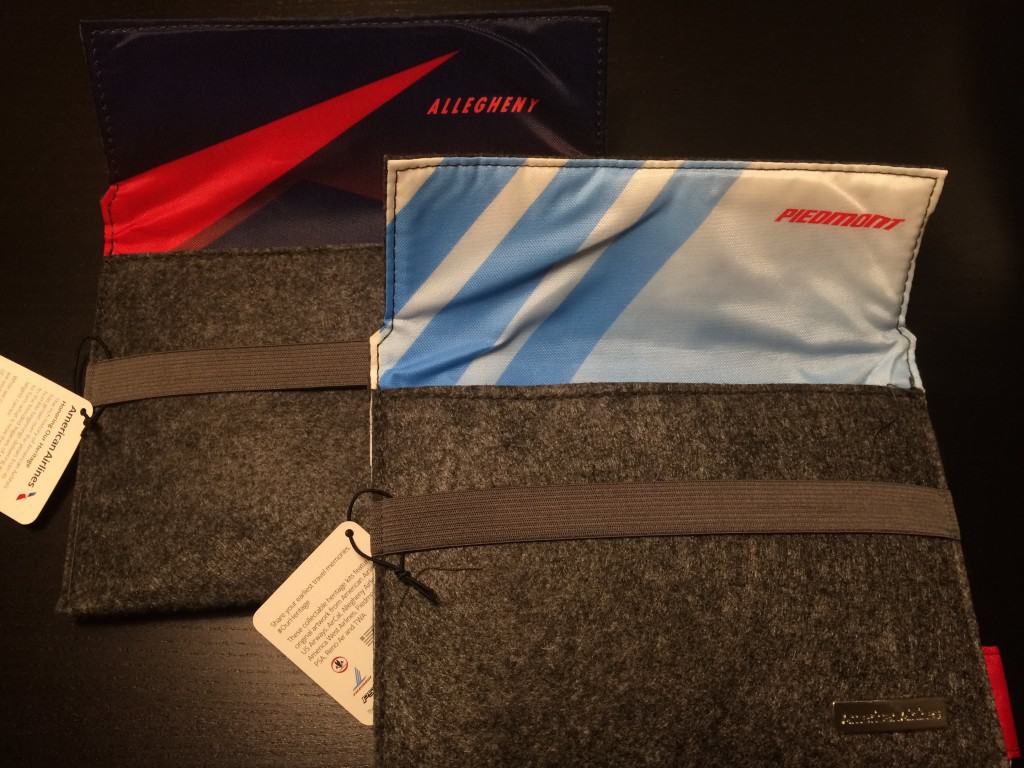 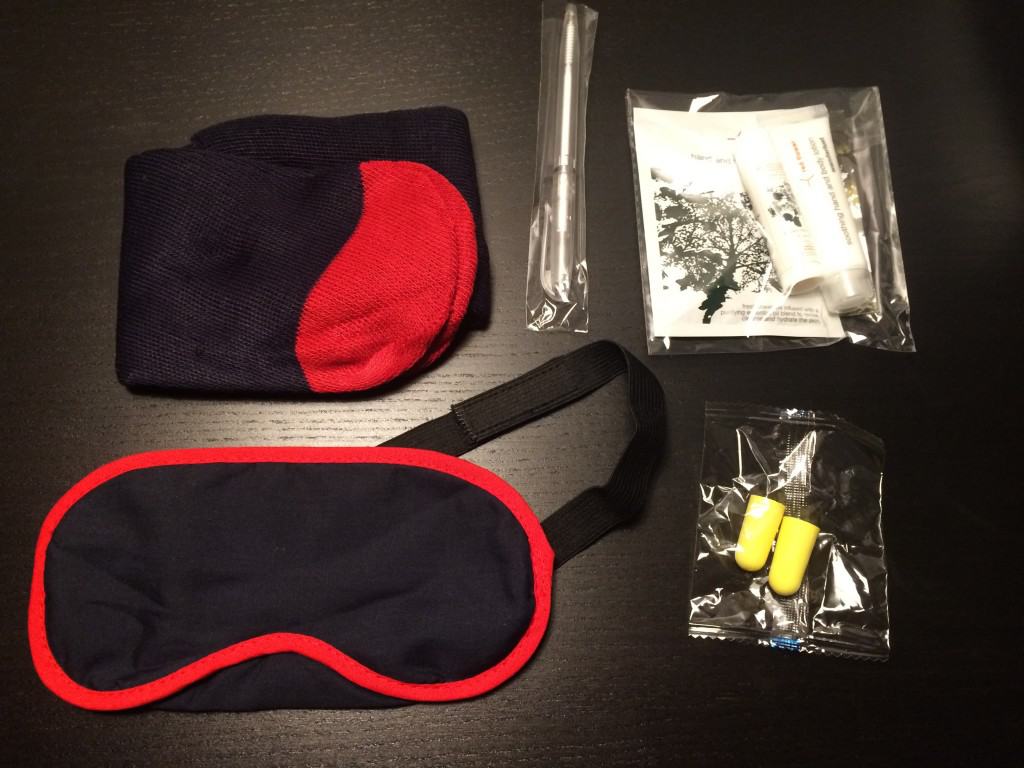 The flight attendants were less than stellar.  Of the three that were covering Business Class, one was mediocre and the other two were actually rude.  I can’t imagine what the Economy staff were like.  The food was pretty good by airline food standards.  Dinner was served after take off (three course; salad, main course, and dessert).  I had some sort of chicken dish.  I did enjoy the ice cream sundae with choice of toppings for dessert.  A snack was served about half way through, although there were pretzels available at any time near they galley.  Generous.  Breakfast was served just before our arrival.

The movie selection was good and helped pass the time.  Sleep was difficult even with a pillow, eye mask, earplugs and a blanket and fully reclined; but again, much better sleep than I have ever had in Economy.

We landed right on time at the sprawling Beijing Capital International Airport.  Terminal 3 Satellite E is the main international arrival and departure terminal and is also the second biggest airport terminal in the world after Dubai.  It was built for the Olympics and does have striking architecture.  Customs is done at the satellite before boarding the train to the terminal.  Customs was a bit slow; we arrived after an Air Canada flight.  However being in Business meant I was one of the first off the plane which cut down the wait time at customs.  My passport and visa that I obtained for $190 were checked and I was cleared.  The train ride from the satellite to the terminal must have been at least a mile.

I didn’t check any bags so I stopped at the ATM, purchased a bottle of water, and headed for the taxi stand.  My weekend in Beijing was underway.

Continue to Weekend in Beijing – Part 2