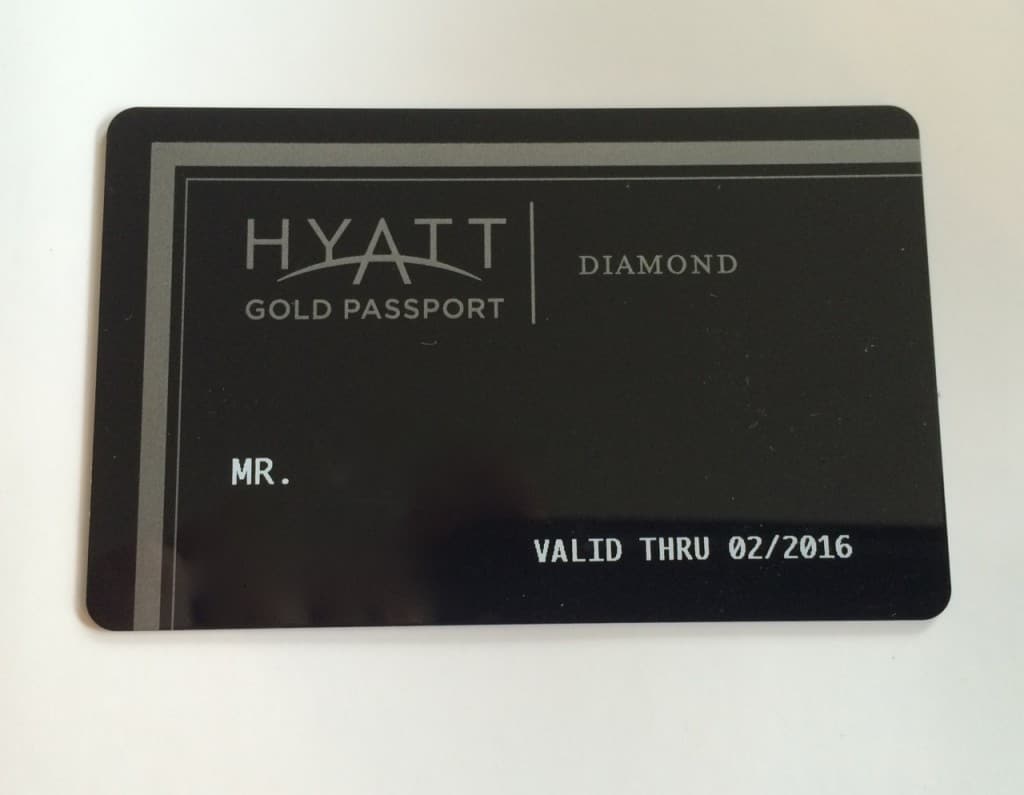 I first signed up for Hyatt Gold Passport last summer after I learned about their relationship with Mlife.  Since I was a Gold Mlife member I received Platinum status with Hyatt’s loyalty program.  I had signed up for hotel loyalty programs before, but with the purpose of earning miles on Alaska Airlines for my stays.  In 9 months I have accrued 20,000 points with HGP through my stays at Mlife hotels in Vegas and Hyatt hotels.

The benefits of Platinum HGP status are minimal; it was devalued even more last month when all guests were given free wifi.  Reports over at Flyer Talk have some people being offered a Hyatt Diamond Challenge (also known as the Hyatt Gold Passport Elite Tier offer) with 12 nights in 60 days.  Some said the offer was targeted only to those with a high number of stays in 2014 while others said they were able to enroll in the challenge by contacting the property of their upcoming stay.

I have four booked reservations between now and June so I emailed the two properties that had an email posted on their website.

Both hotels replied quickly, letting me know that I would need to contact Hyatt Gold Passport directly to enroll in the Hyatt Diamond Challenge. 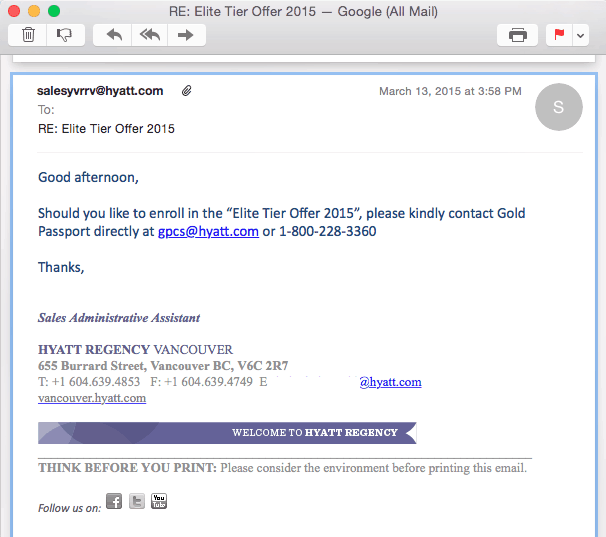 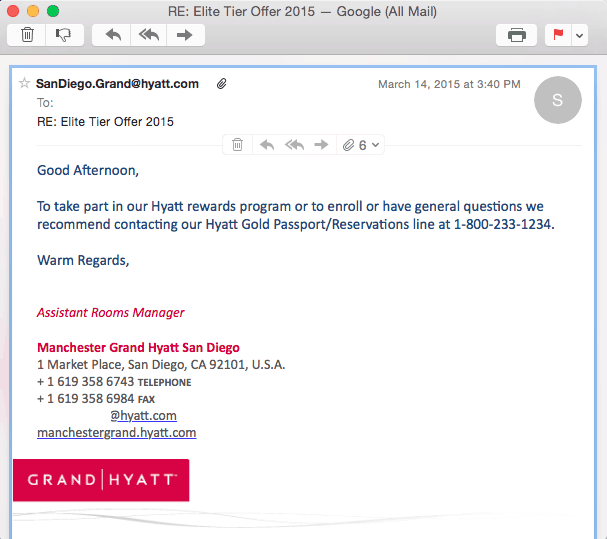 After receiving the email from the Vancouver Hyatt (above), I followed up with an email to the address I was given.  I forwarded a copy of the email from Vancouver and added the request to be enrolled in the Elite Tier Offer.  I sent the email on Friday afternoon and today (Monday) I received the following email: 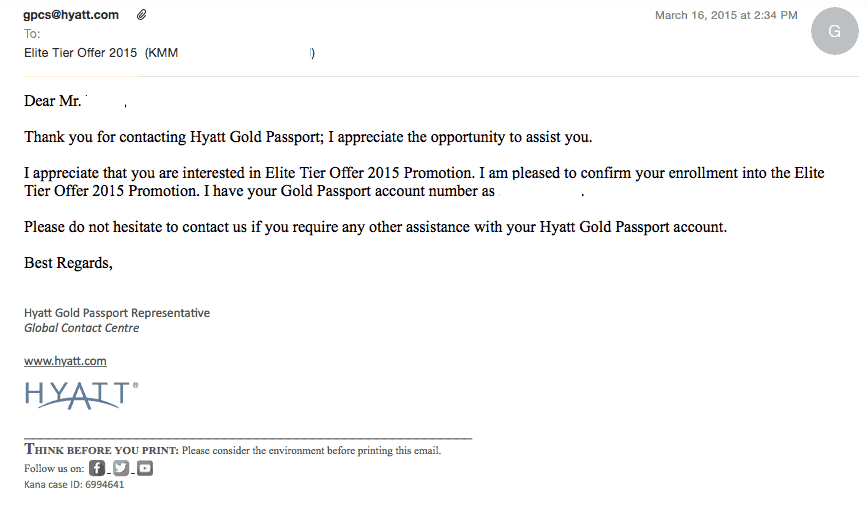 I already have three stays/five nights booked in the next 60 days.  My plan is to combine this with the 20% Points Back Hyatt Visa offer for an additional seven nights to complete my Hyatt Diamond Challenge.  I have three trips already planned over the summer so I think having Diamond status will be worth it, even if I have to do a mattress run or two.

UPDATE:  I sent an email to confirm when my 60 Hyatt Diamond Challenge began and received a very confusing email back that said I had until July 31, 2015 to complete my challenge. 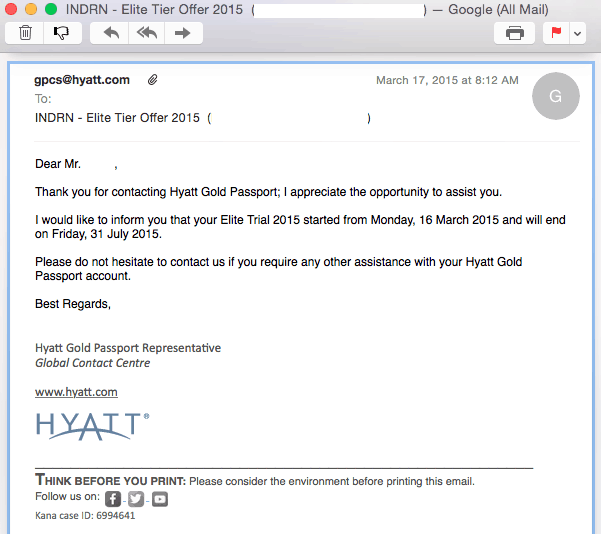 This did not seem correct, I had never heard that you were able to have 4.5 months to complete the Hyatt Diamond Challenge.  This would be great news, but I wanted to confirm… my suspicion was that the representative had confused the Trial with the 20% Points Back promotion.  Sure enough: 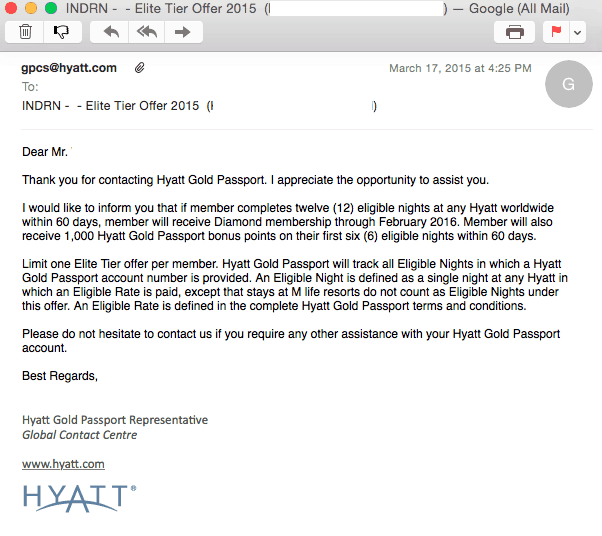 This was by far the most helpful and full explanation of the trial.  I appreciated this representative explaining the entire Hyatt Diamond Challenge.

Update x2: At the half way point (6 nights) in, I received this email.  I am tracking my nights closely but if I wasn’t this would be a helpful reminder. 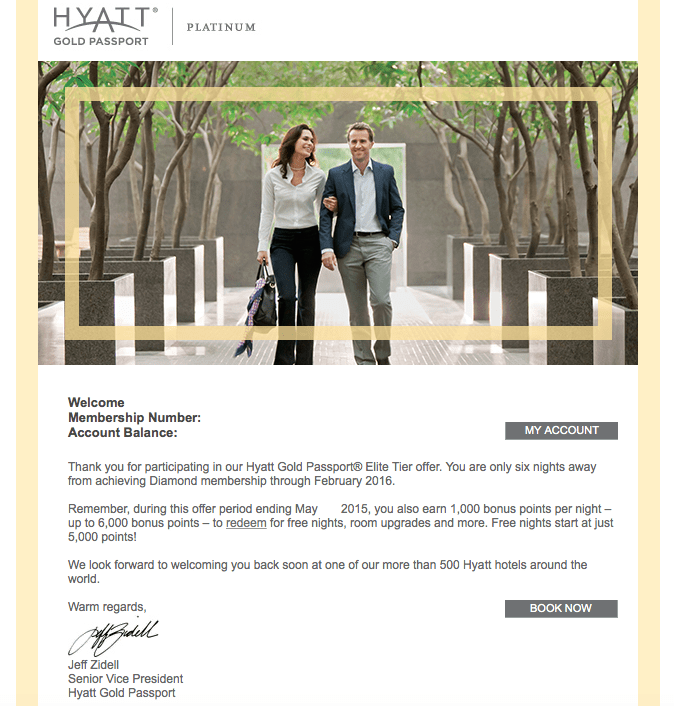 Update x3: A few days after receiving the email above, I received this email welcoming me to the Elite Trial offer (which seems like it should have been sent out at the beginning of the trial, but maybe it was just delayed): 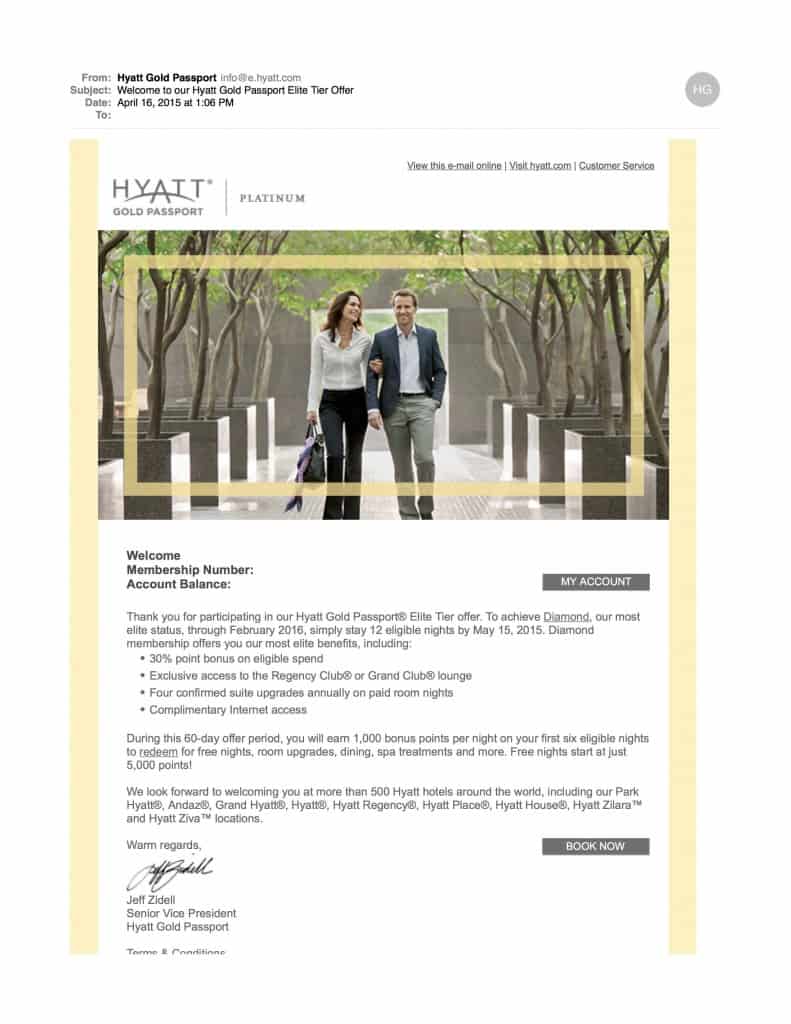 Update x4:  Read about how I successfully completed the Hyatt Diamond Challenge.

Update x5:  It is official.  I checked out from my last of the 12 nights for the challenge.  Within 24 hours my account showed my new status that is good until the end of February, 2016.

Update x6: About 4 weeks after I finished the Elite Tier Offer/Diamond Challenge I received a packet in the mail.  Included was my new Diamond card as well as the two free United lounge access cards.  You can read about my first stay as a Diamond member here. 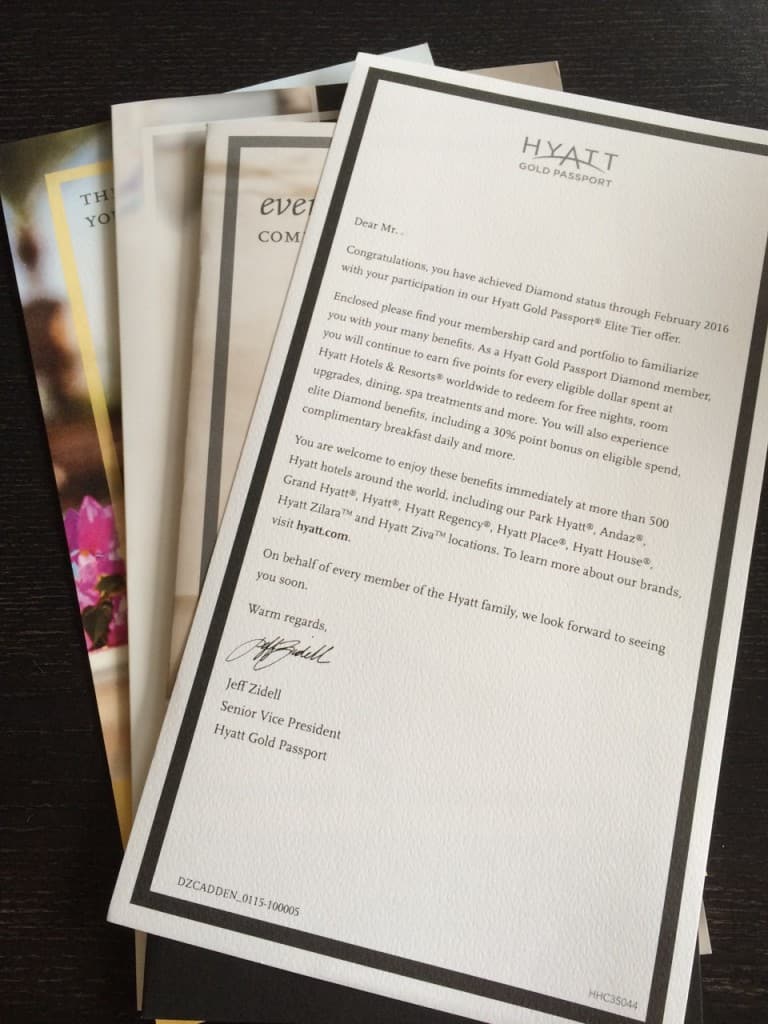 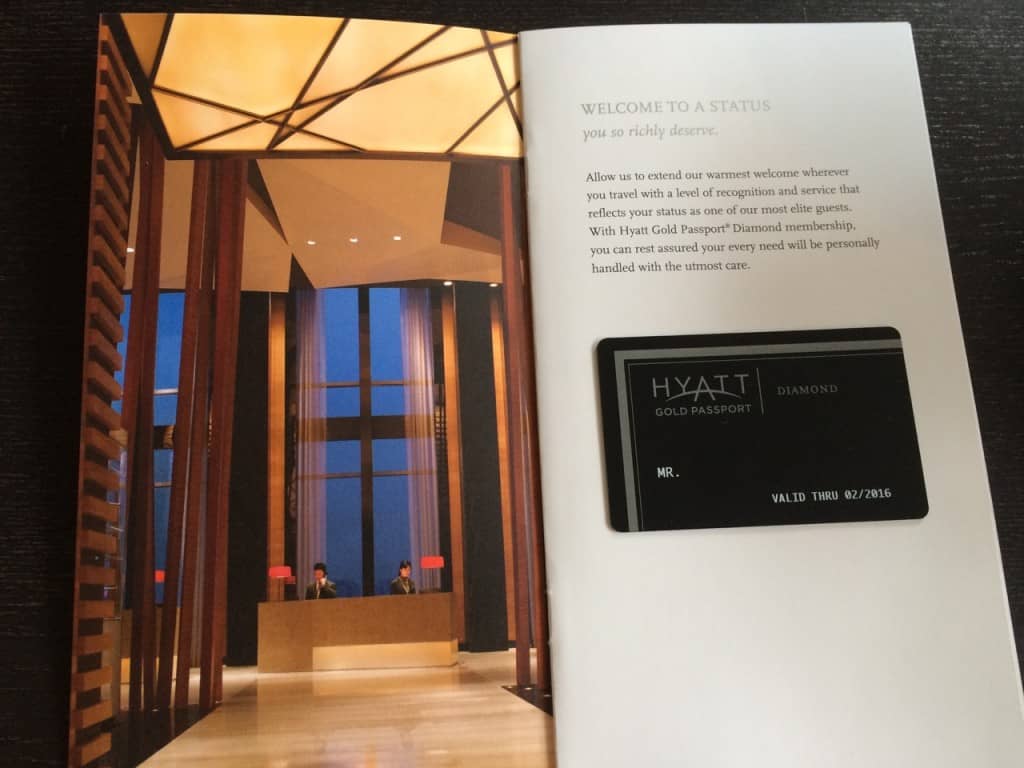 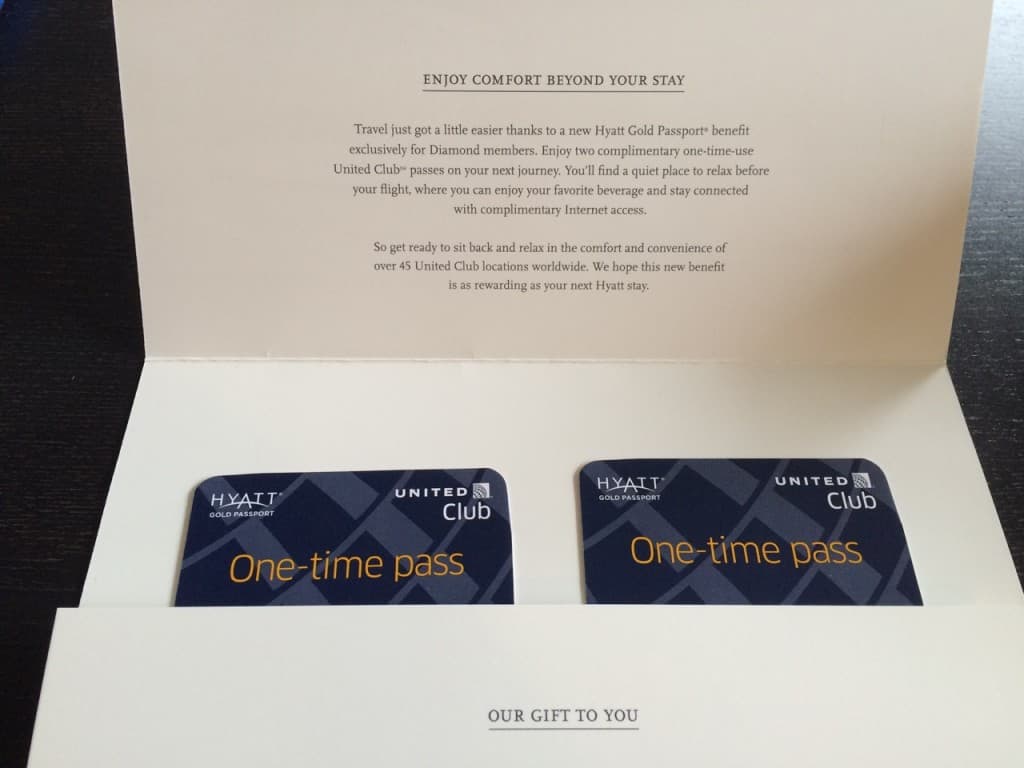 Update x7: It seems that the Elite Tier Offer has been extended and updated.