Airplane bathrooms can be disgusting.  But I had never heard of a plane diverting due to someone stinking up the lavatory until today.  If this article from the Daily Mail is to believed, this week a British Airways flight from London to Dubai had to turn back because of a terrible smell coming from the toilet.

Upon landing back in London, a politician on the flight tweeted the following:

Insane! Our BA flight to Dubai returned back to Heathrow because of a smelly poo in the toilet! 15hrs until next flight… #britishairways

Apparently what was supposed to be a brief delay turned into having to wait until the next day for a replacement flight. 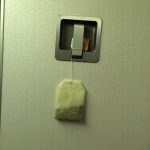 I’m assuming that there was something wrong with the toilet, and not just a bad smell.  On a flight to Vegas, I was stuck in a middle seat in the very last row (my original flight was delayed and I snagged a seat on another flight that was about to take off), right next to the lavatory.  At one point during the flight one of the flight attendants put a pack of coffee grounds in the lavatory.  She explained it was a trick she learned to cover up/reduce odors.  During my first mileage run I discovered a tea bag hanging in the lavatory; either someone was drinking tea in their or it was to cover up smells.

I can’t post about airplane bathrooms without posting this stand up routine from Jerry Seinfeld: