$150,000 Blackjack Tournament at Paris Las Vegas:
How I did at my first Vegas tournament 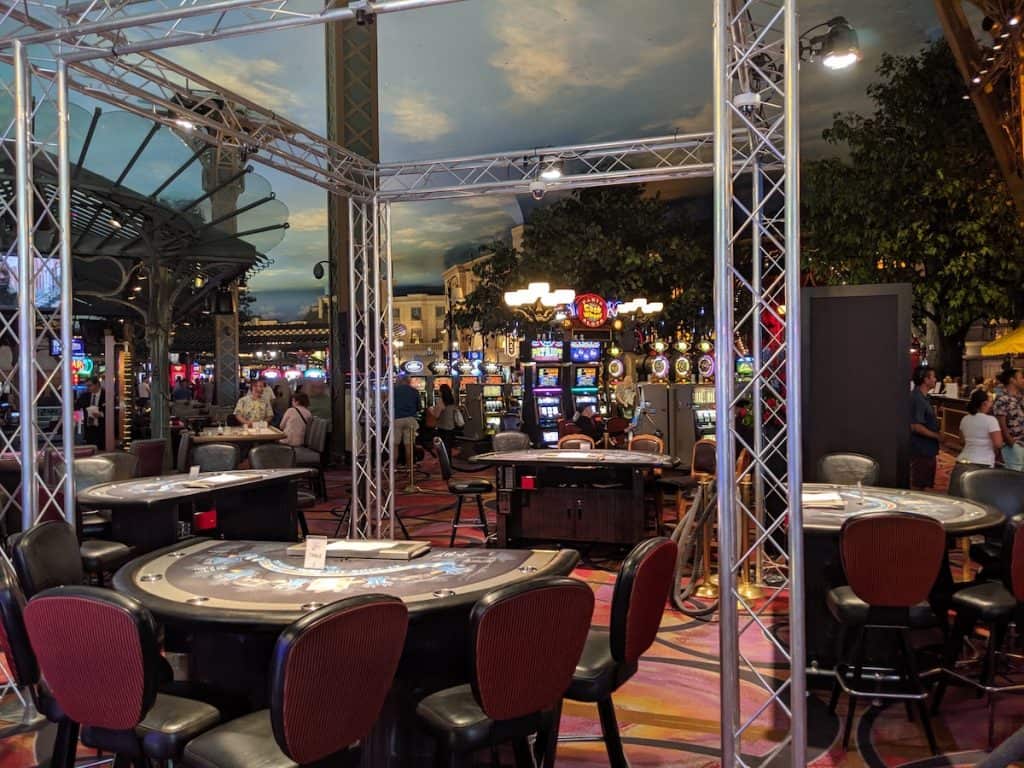 Ever since I status matched to Caesars Rewards Diamond elite status, I have been receiving various offers on my Caesars Rewards account.  These offers include discounted or free nights, free gift cards with stay, and tournament entries.  You can check what offers you have on your account by logging in to your account and clicking on My Offers on the lefthand menu.

While I have used free night offers in the past, I had never tried entry into a tournament.

I had a weekend trip to Vegas planned and it just so happened I had an offer for a free entry into the $150,000 Blackjack Tournament at Paris Las Vegas that included a free three night stay at Bally’s.

I booked the offer not for the entry into the tournament but because I wanted a free room.  As a Caesars Rewards Diamond, even the resort fee is comped so my weekend stay would not cost me a thing.

As I thought about it more, I decided I would try my hand at the tournament.  I had played casino blackjack perhaps three times in my life.  I figured I would be eliminated quickly but why not give it a try.  It was free after all. 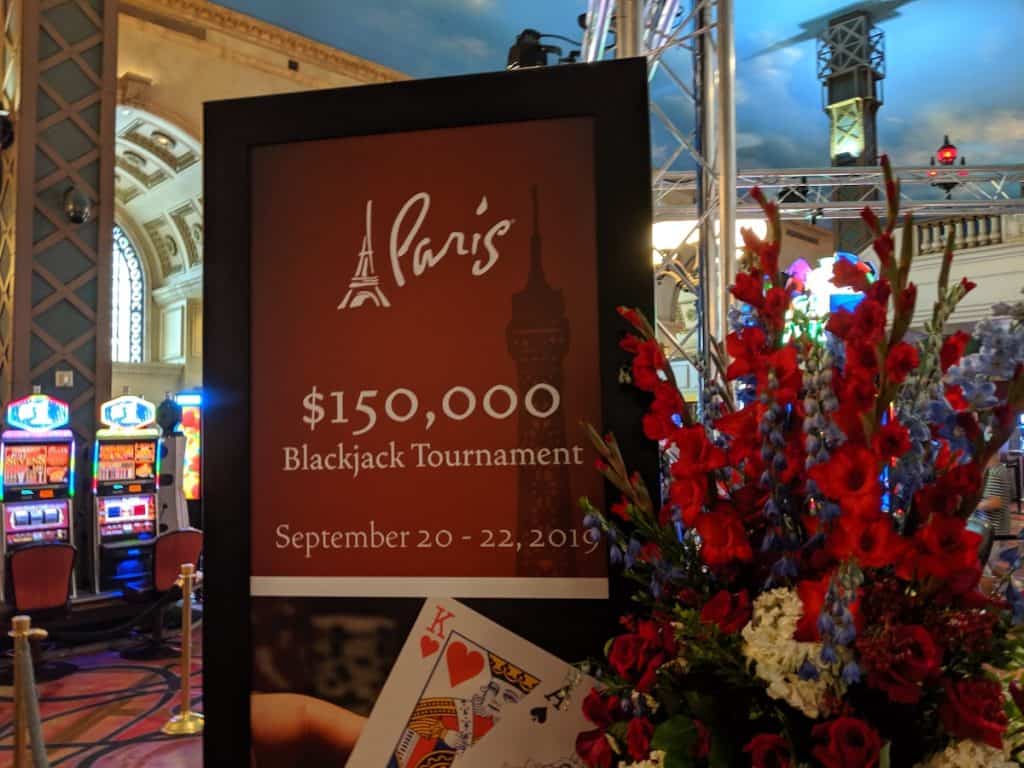 Tournament registration took place for a few hours on Friday evening and one hour on Saturday morning.  My flight didn’t get in to Vegas until close to midnight on Friday, so I would be registering on Saturday.

Upon check in at Bally’s, I was handed a one page flier with the weekend’s schedule. 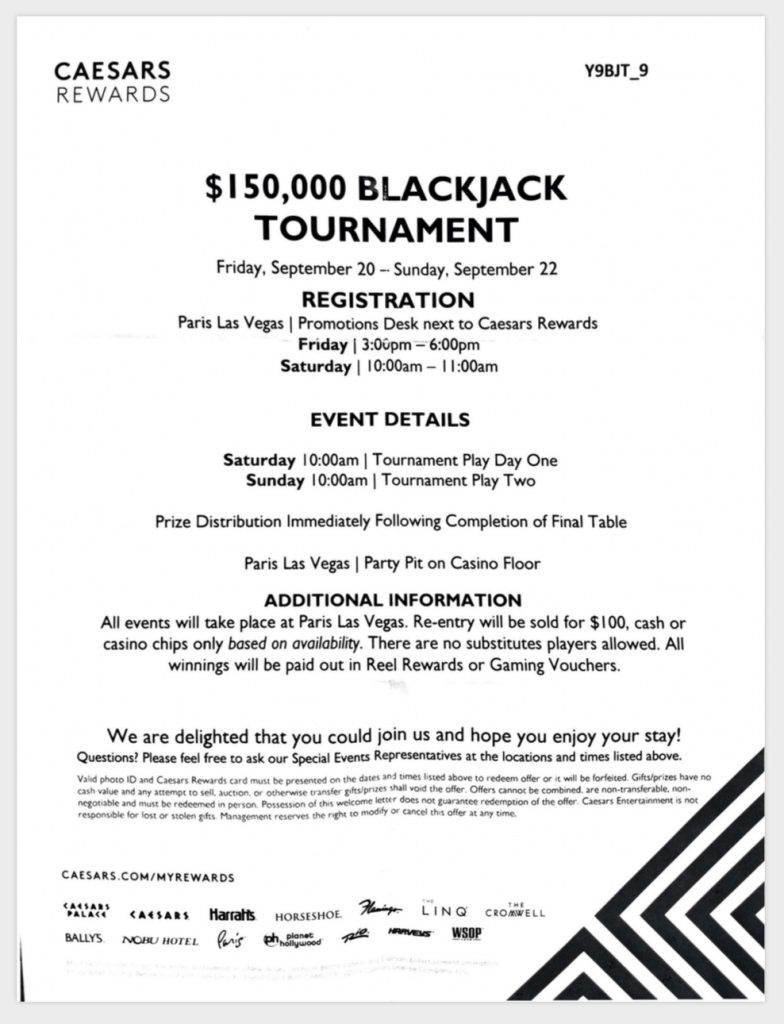 I got up on Saturday morning and headed over a bit before 10:00am.  To my surprise, there were already people sitting at tables ready to go.  I quickly found the registration desk where I was asked for my Photo ID and Caesars Rewards players card.

I was told that I could pick between a 4:00pm or 5:00pm time slot for the first round.  I picked 4:00pm and was given a receipt like the one below. 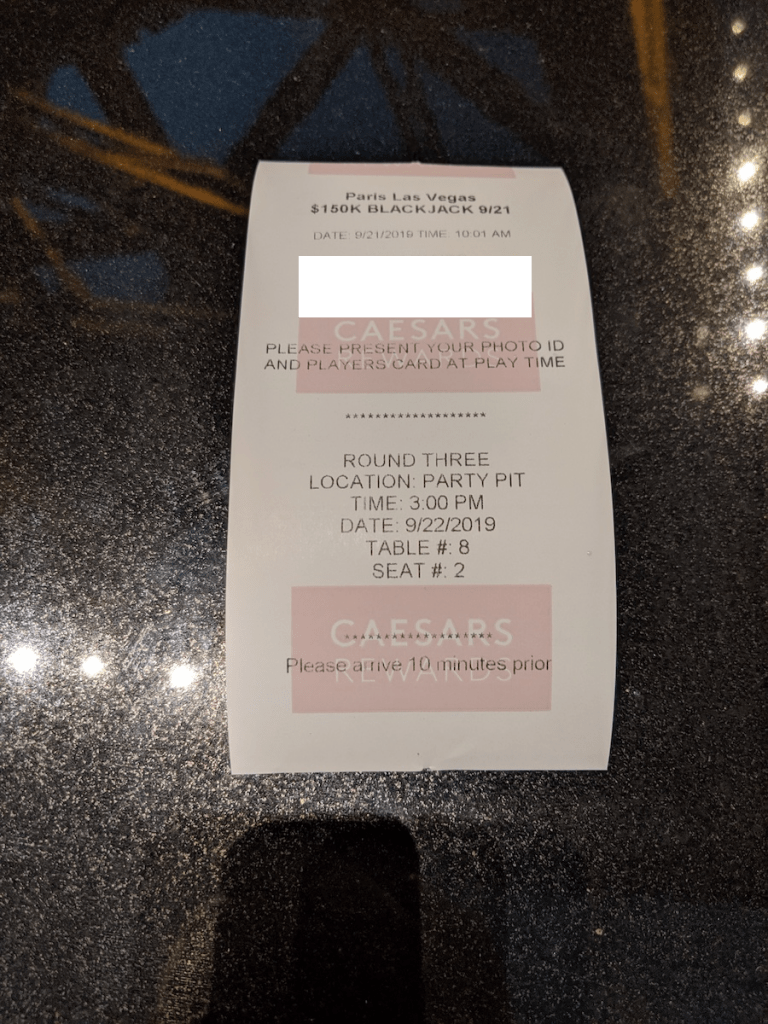 I was also given a list of the rules for the tournament (PDF). 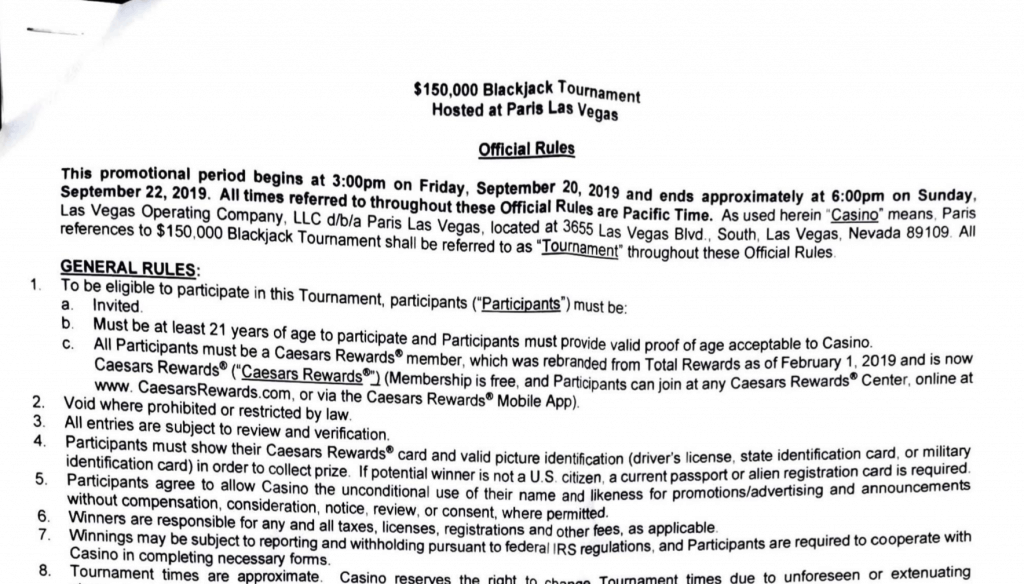 If eliminated during Round One, you could buy back in for $100.  All of the buy back spots were sold out within the first few hours of play.  If you want an early time slot, be one of the first to register once registration opens.

Saturday had all 593 participants play Round One.  Round Two through the Finals were played on Sunday.

Here is how the Rounds were scheduled: 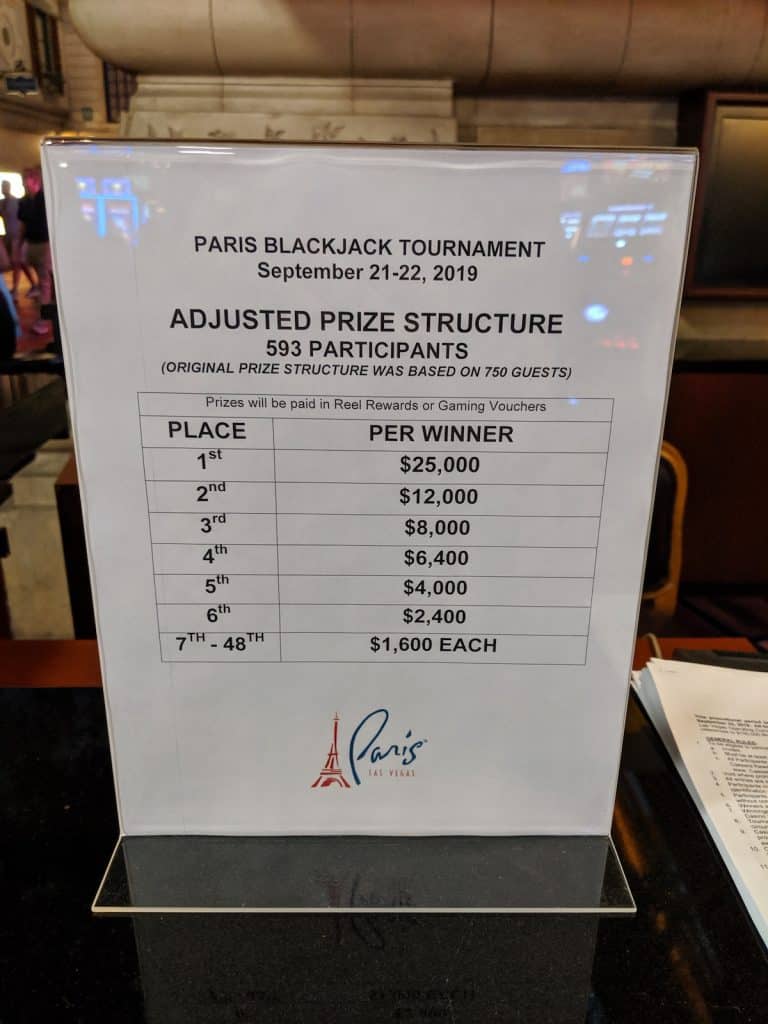 When I arrived at 4:00pm I found my table and assigned seat.  Each table has six seats.  Once seated, a waitress came around for drink orders. 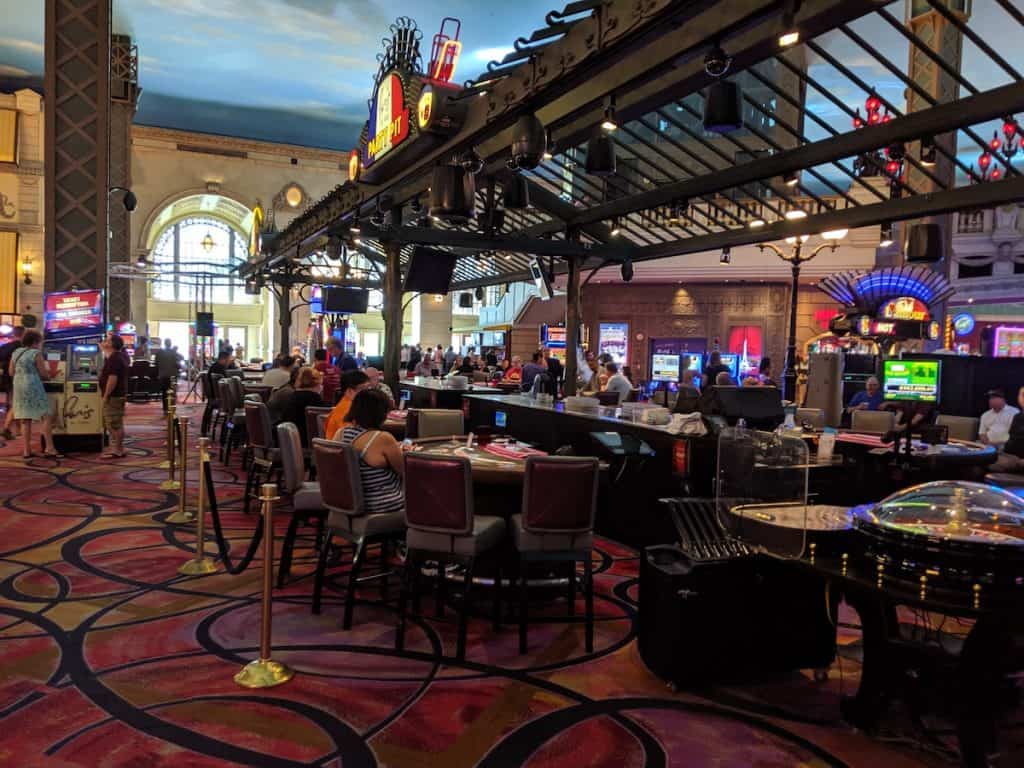 A few minutes before 4:00pm, the announcer highlighted the basic rules and how the tournament would work.

At the start of each round, each player would receive $1,000 in play chips (no cash value).  20 hands are played in each round.  Deal/bet starts with player in seat one and rotates around the table.  Players must bet a minimum of $25 per hand with no maximum limit.  After the 17th hand, the dealer counts everyones’ chips and reads out the count.  Whoever has the most chips at the end of 20 hands wins and advances.  No chips carry over from round to round.

At the end of each round, the winners receive a ticket that they take to the tournament hosts and are assigned a time, table and seat for their next round of play.

I stuck to Blackjack Basic Strategy as did everyone else at the tables that knew a bit about the game.  The strategy came more from deciding what to bet and when.  The only time I picked to deviate from basic strategy was when I had two 10’s and the dealer had a 5 or a 6 and I wanted to split my 10’s in hopes of winning some extra money depending on where my chip count was.

In Round 1, two of the players lost all their chips before the final hand.  Somehow I managed to come in 2nd and advanced to Round Two.

In Round Two, I was assigned the 1:00pm time slot.  The table I was assigned only had five players instead of the standard six.  I advanced into Round 3. 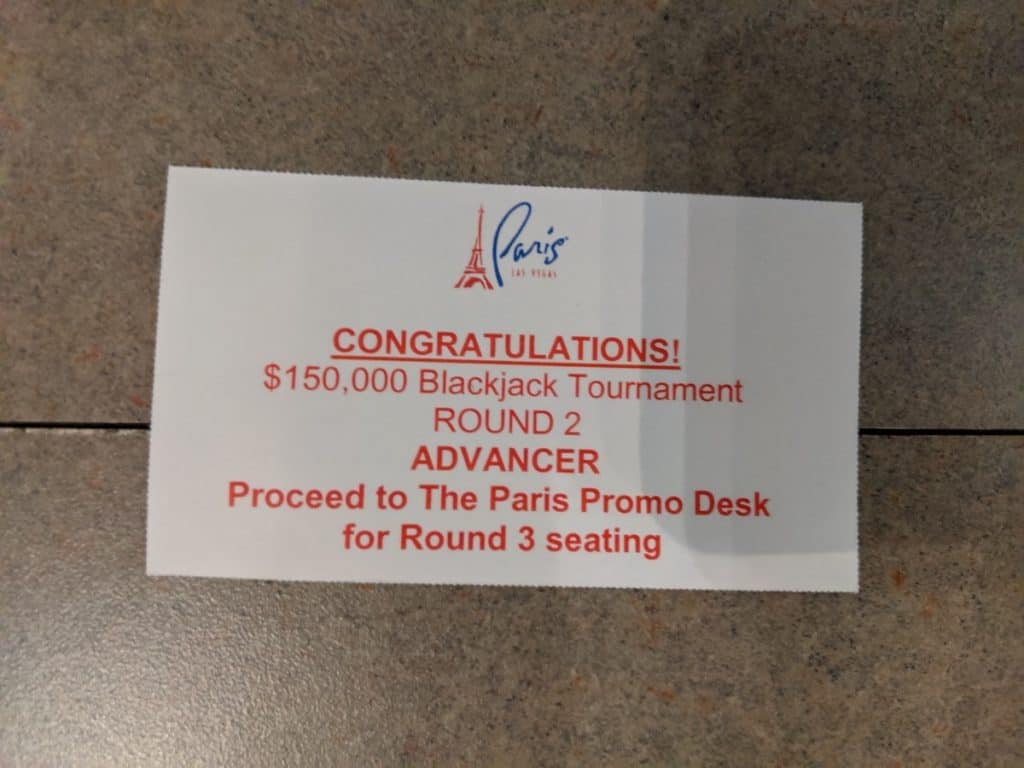 Round Three started for me at 3:00pm.  It was an important round as the top players that advanced were guaranteed $1,600.  I advanced with the realization that if I made it past the next round I would miss my flight home!  So I called Alaska Airlines but all their flights were full the rest of the day.  As my back up, Spirit had a few seats on a late night flight so I focused back on the game. 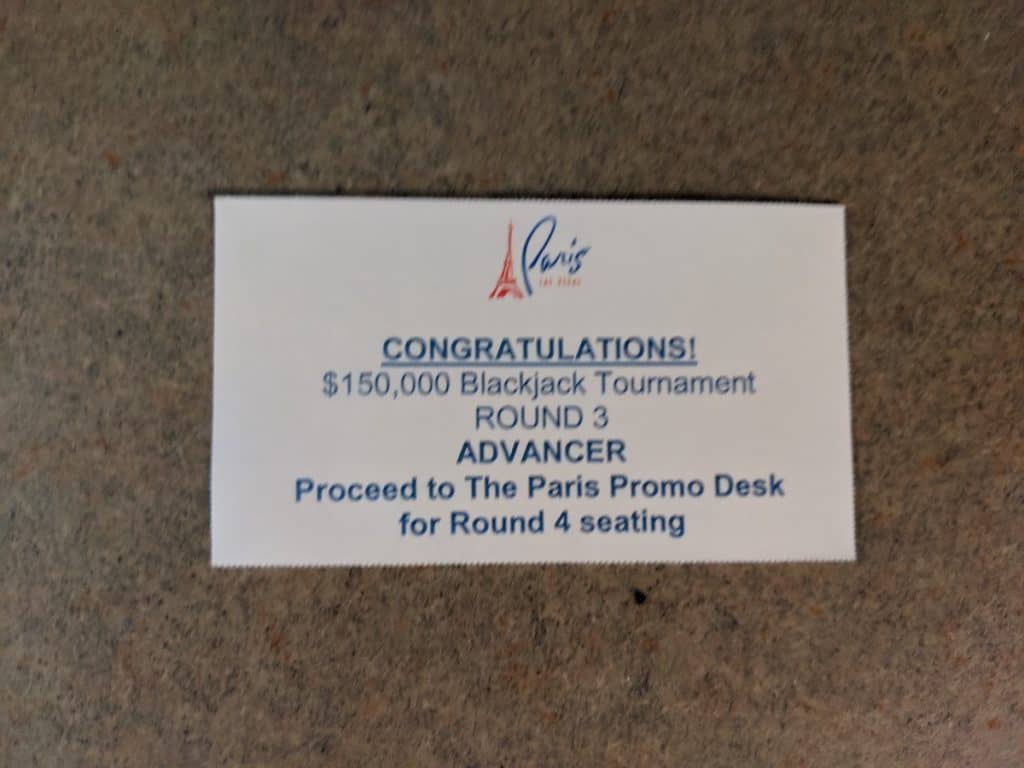 Round Four started for everyone at 4:00pm.  The top three players advanced.  I ended the round with the most chips and was on to the Semi Finals. 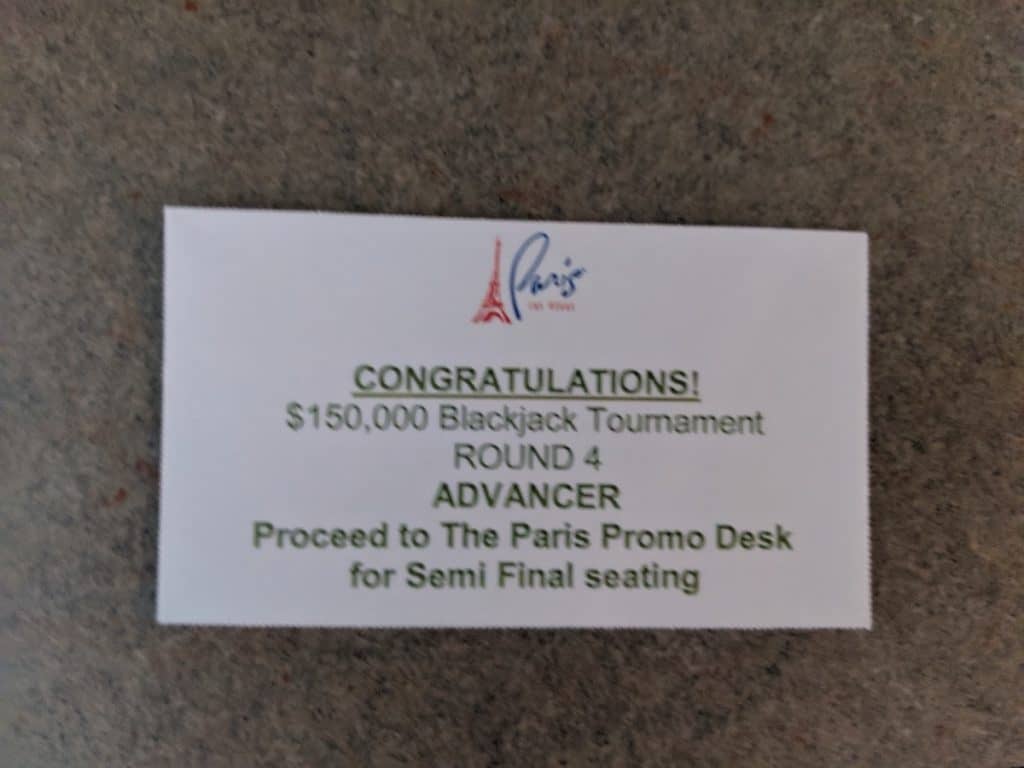 For the Semi Final Round at 5:00pm, six tables of four players each were set up.  Only the first place finisher advanced to the Final Round.  Going in to the last hand, I made a mistake with my bet that could have cost me the win had I lost the hand.  Fortunately I was dealt a good hand and won the round. 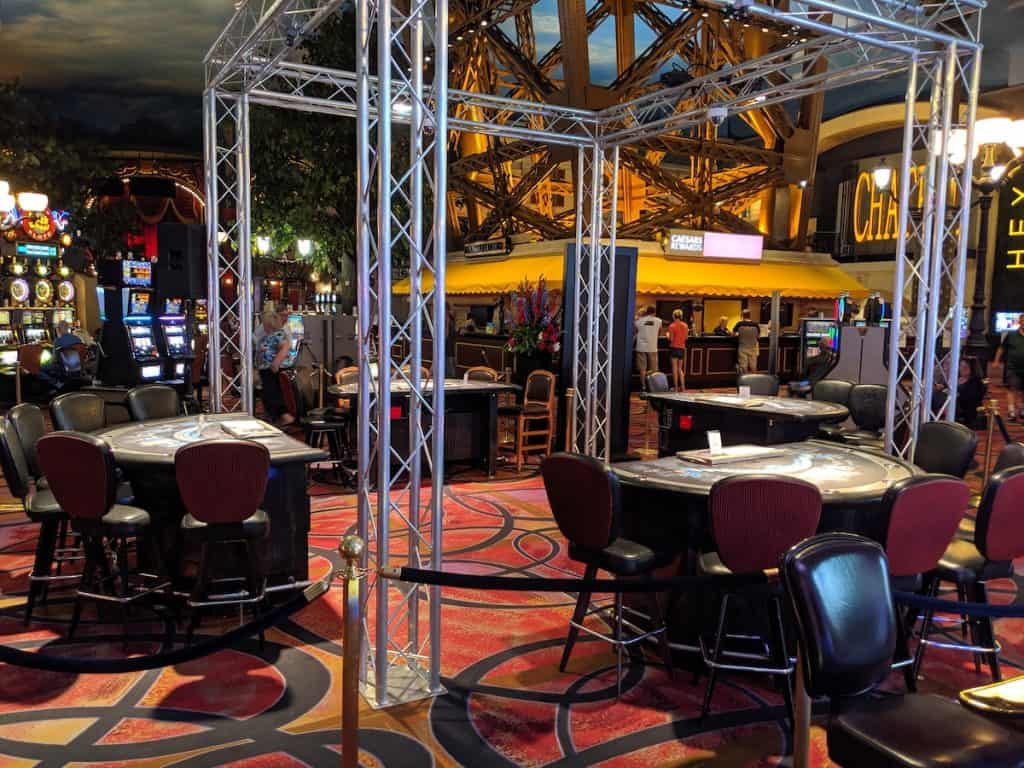 The Final Round was immediately after the Semi Final and started a few minutes after 5:30pm.  A crowd gathered to see who would win the big prize.  I decided to go big in the first few hands in hopes of making a sizable lead that would be tough to catch.  Unfortunately the dealer was extremely hot for the first five hands.  Every player lost every hand, however because I bet big, I lost a lot more.

I was the first to be eliminated around hand fifteen.  My tournament ended with me in 6th place and $2,400 in free play.  Fortunately my luck continued and I was able to get on an Alaska flight at 9:00pm.

The prize was awarded either as table or slot free play.  I was told that the table credits would expire in about a week, while the slot credits were good until the end of the year.  Not sure if I would be able to gamble the full amount that day, I figured I’d do the slot play and could come back before the end of the year if necessary. 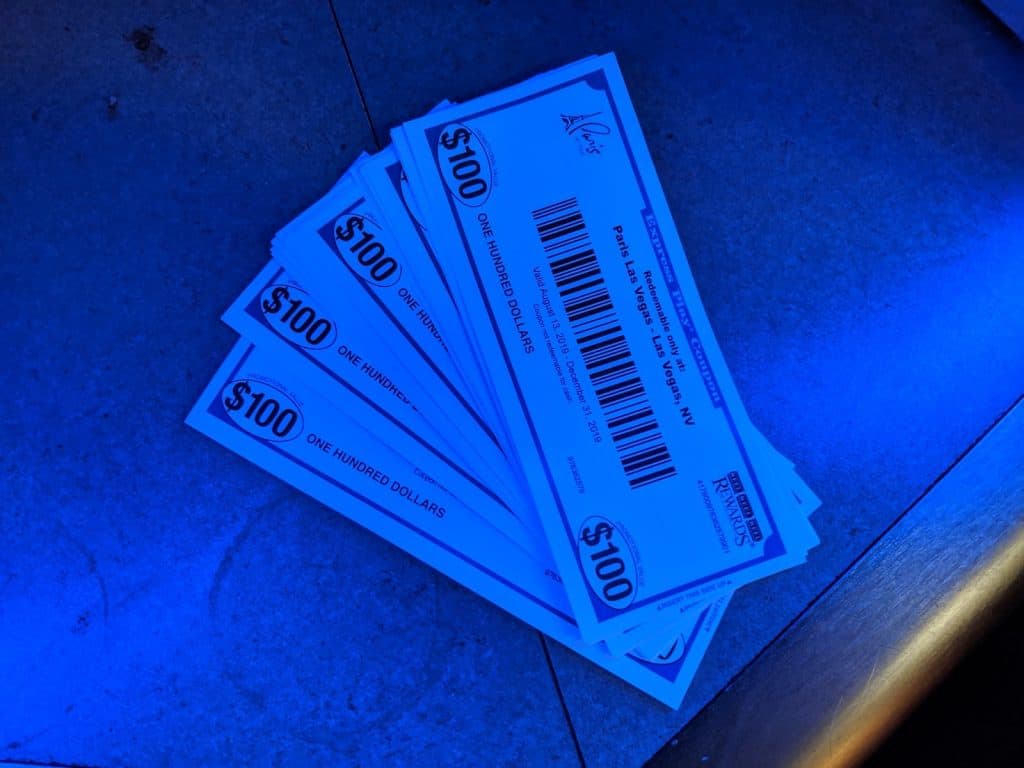 Each time you bet, the machine deducted the amount bet from the $100 free play.  Any winnings could be cashed out.

Since I had limited time before my flight, I mostly bet max bets on high value machines.  Each time I would win, I would cash out and pocket the winnings. 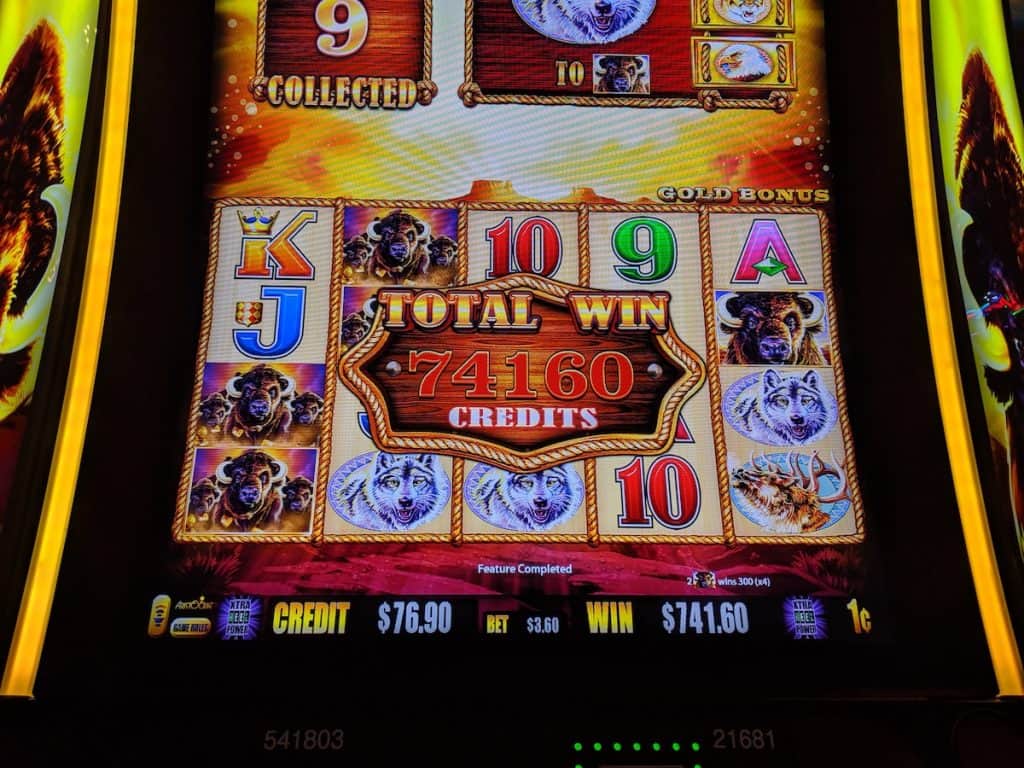 I was able to blow through the $2,400 in free play in about 90 minutes.  When I finished my last voucher, I had a total of $3,300 in winnings that I was able to cash out and take to the airport with me.

Overall it wasn’t too bad for a first Vegas tournament!

9 thoughts on “$150,000 Blackjack Tournament at Paris Las Vegas: How I did at my first Vegas tournament”