I had to find my way from Europe to Hanoi, Vietnam for a mileage run on Cathay Pacific.  I decided I would try a new airline so booked CI Flight 61 from Frankfurt-Taipei and then Taipei-Hanoi on China Airlines in Business Class using Delta miles.  The cost for the ticket was 80,000 Delta Miles plus €90.  I completed the booking about 6 months in advance of my flight.

China Airlines does not offer a First Class.  Business Class is their top product and they do it quite well.

China Airlines does not have their own lounge at Frankfurt so they contract with Priority Lounge (which is accessible with Priority Pass as well).  As a Business Class passenger you also have access to priority security which in Frankfurt is at the gate.  I had already had breakfast at the Hilton Frankfurt Airport so didn’t try the food in the lounge. 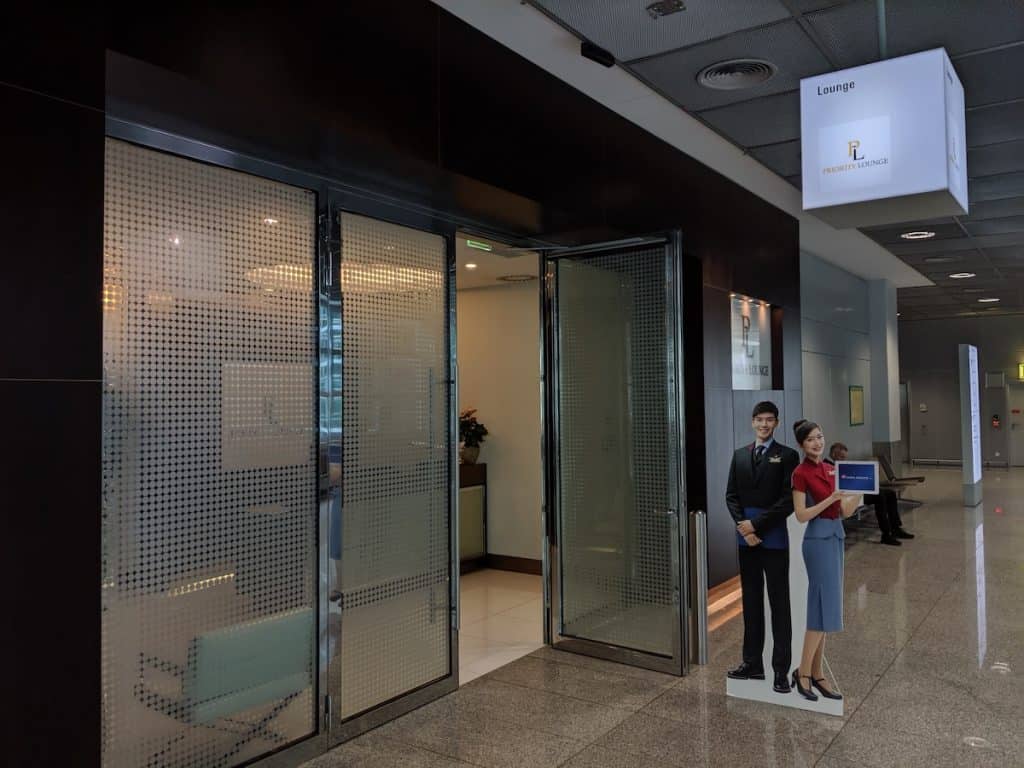 Boarding was right on time with those in the Business Class cabin boarding first. 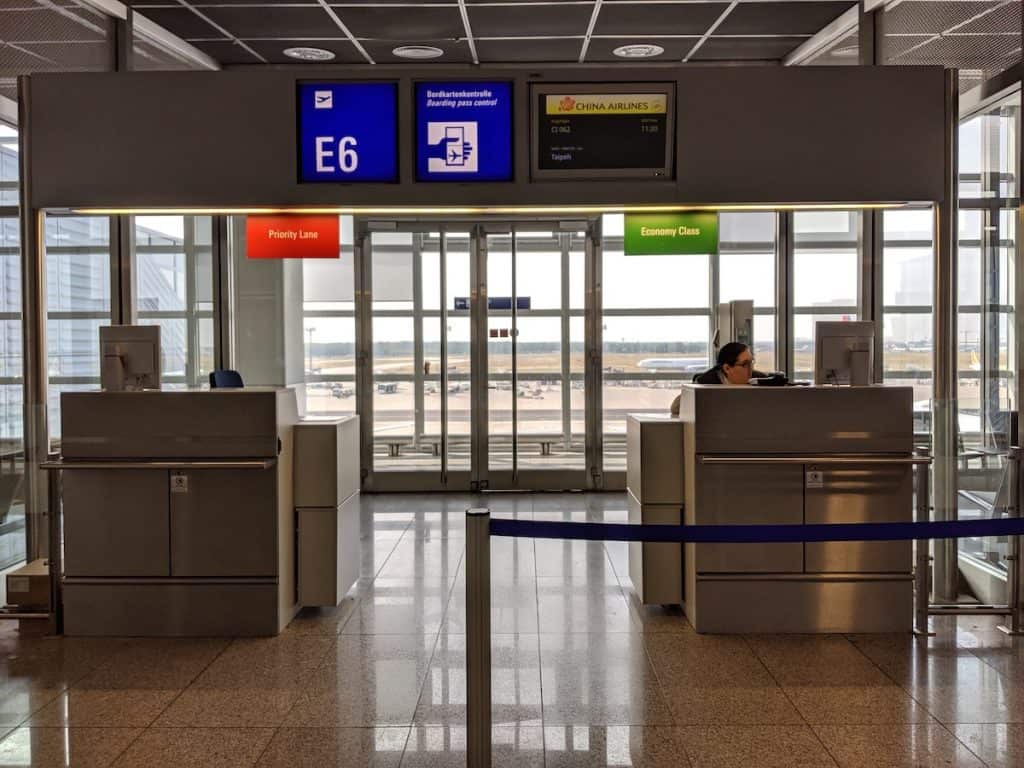 I selected seat 10K which is the first row of the plane.  The Business Class cabin is laid out in a 1x2x1 configuration in reverse herringbone — much like you find on many other Business Class products. 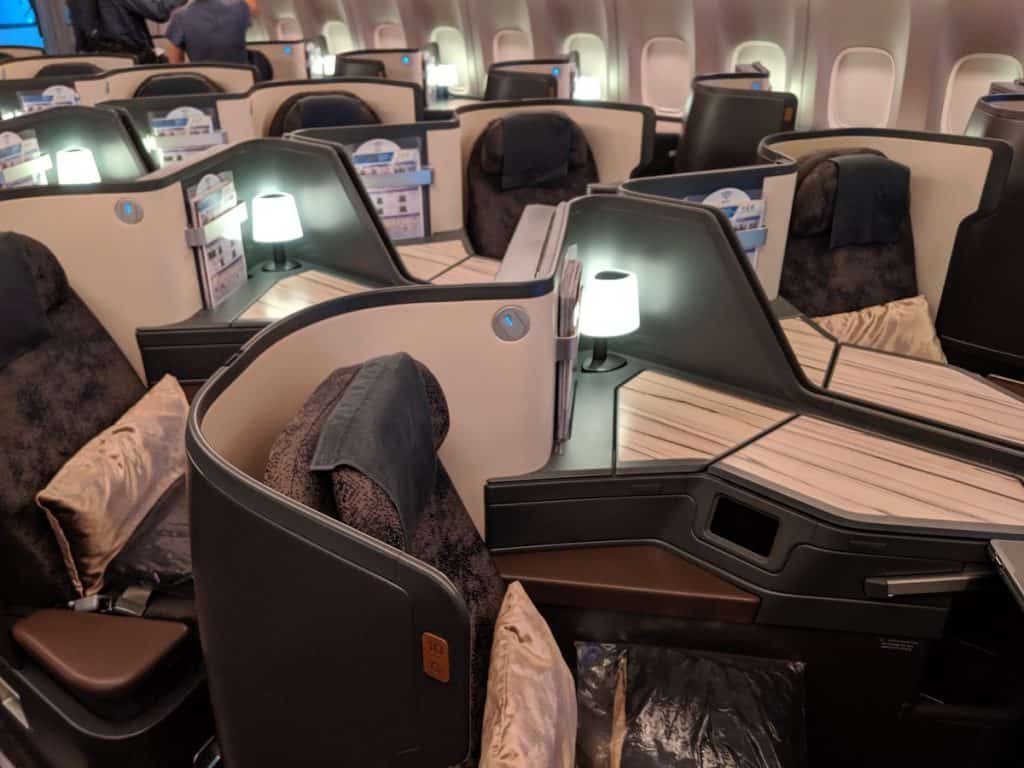 The main Business Class cabin has six rows of seats followed by the galley and a smaller cabin with four additional rows.

The A & K seats are the most private while D & G seats are good for couples. 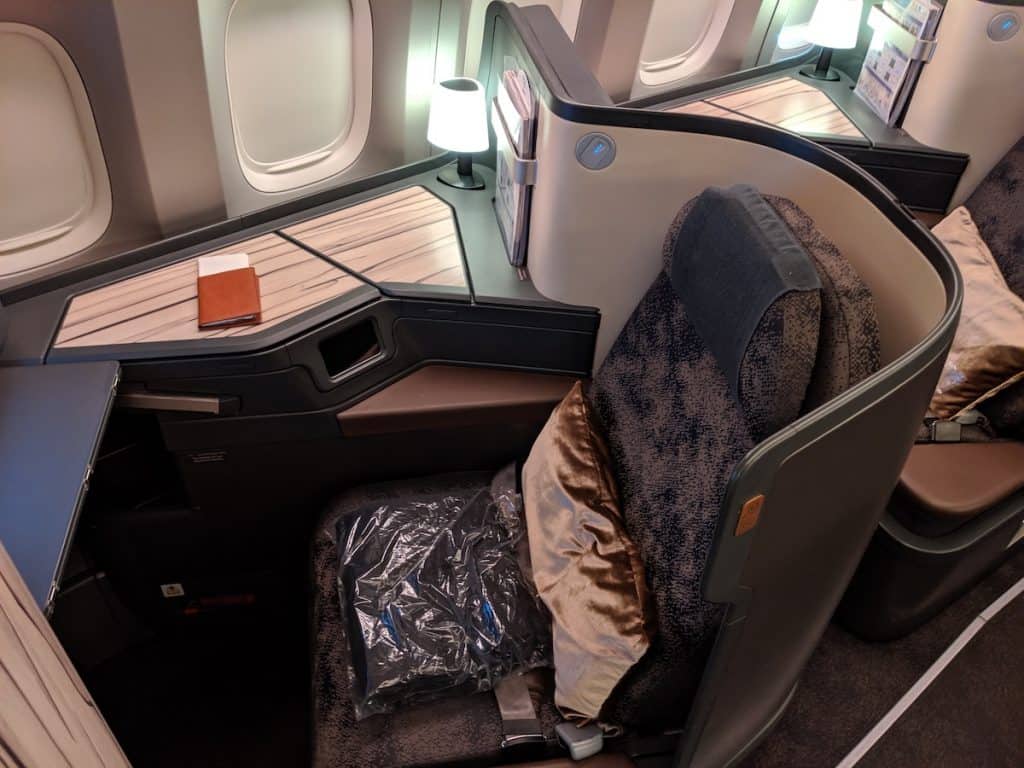 The cabin and seat feature a lot of light wood decor with various dark gray and brown touches.  On each seat was a blanket and pillow upon boarding.

The seat can be fully adjusted as one would expect. 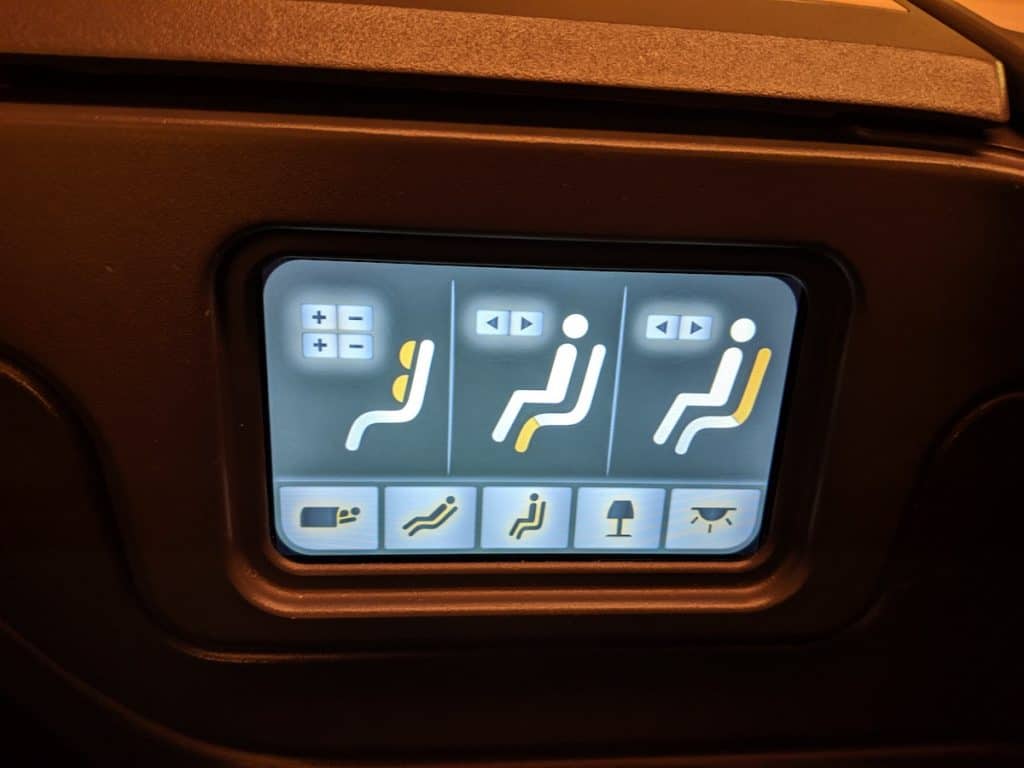 In addition to the overhead lighting and a small LED reading light, a small “table lamp” is located at each seat. 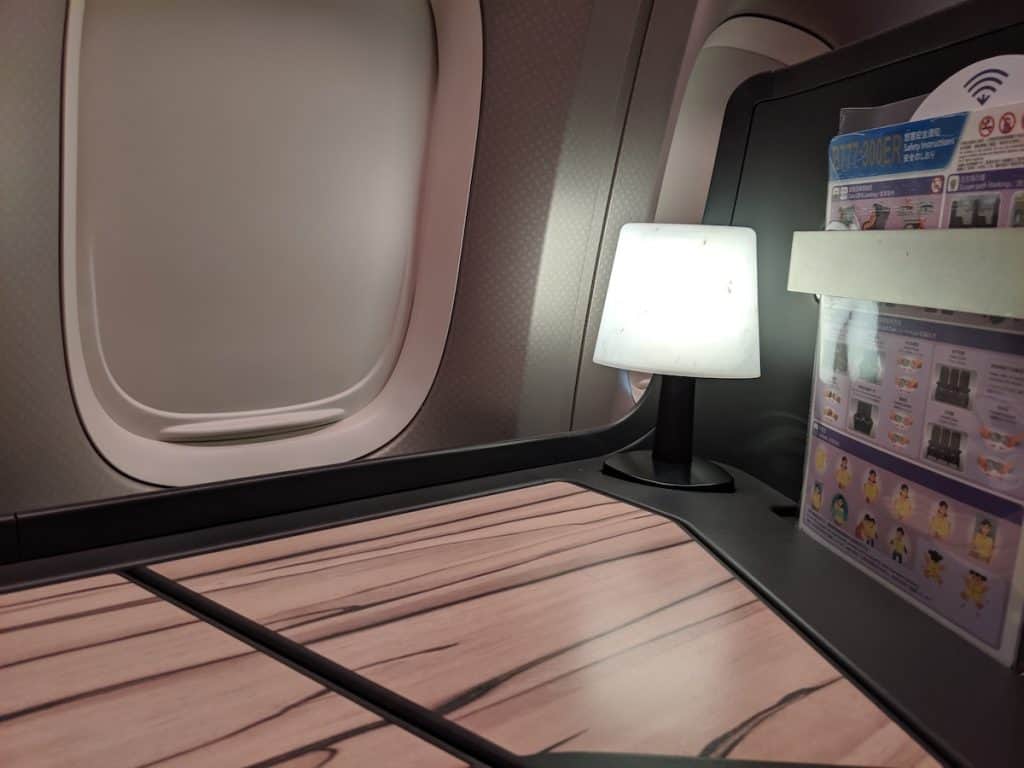 The inflight entertainment screen is a good size and shows art during boarding.  There were a number of new release films available as well as a classic library. 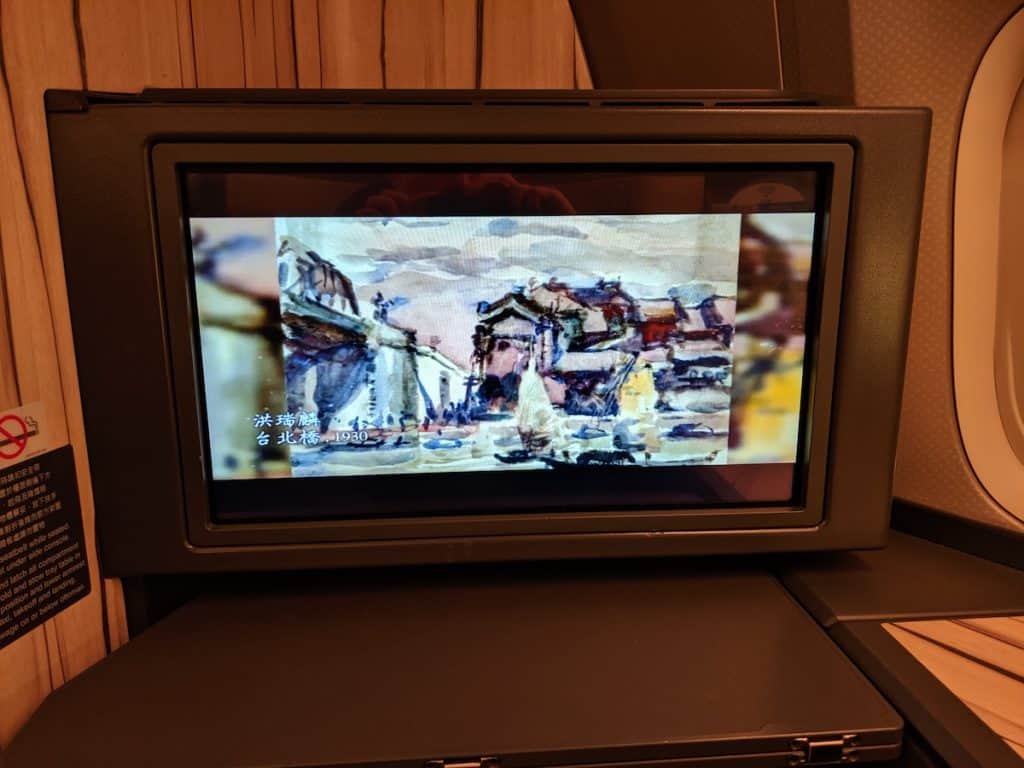 There is plenty of storage for personal items in bins that latch.  One of the larger bins has power ports, entertainment remote and a pair of high quality slippers. 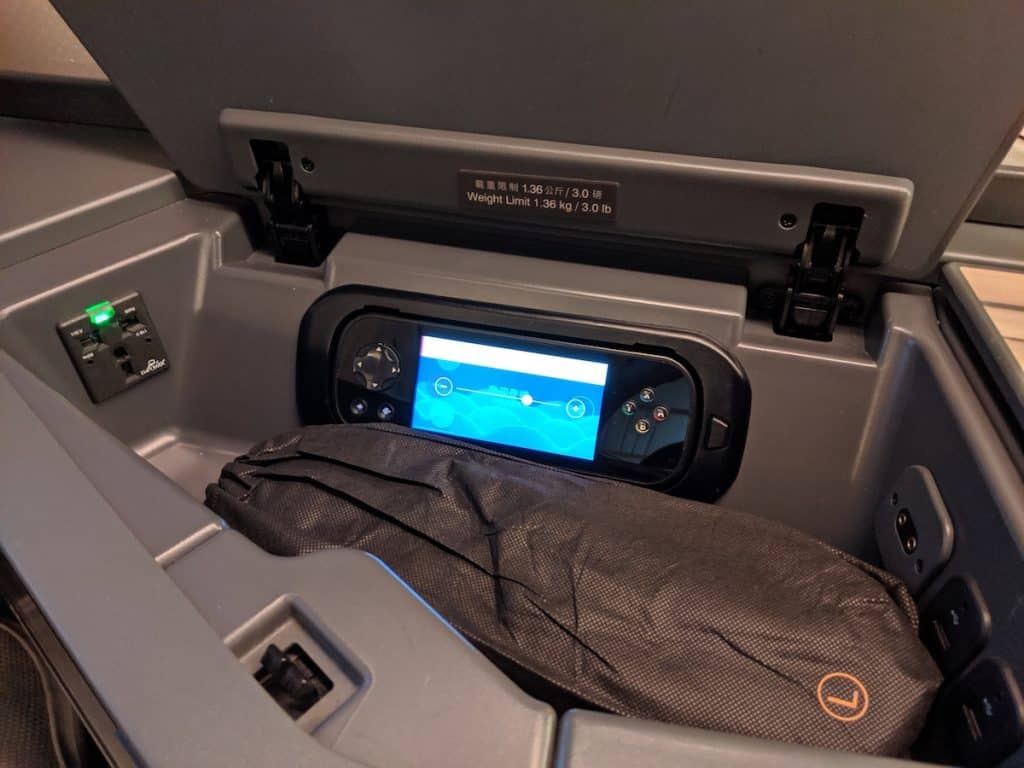 In the armrest on the aisle side is another storage bin with water bottle and amenity kit. 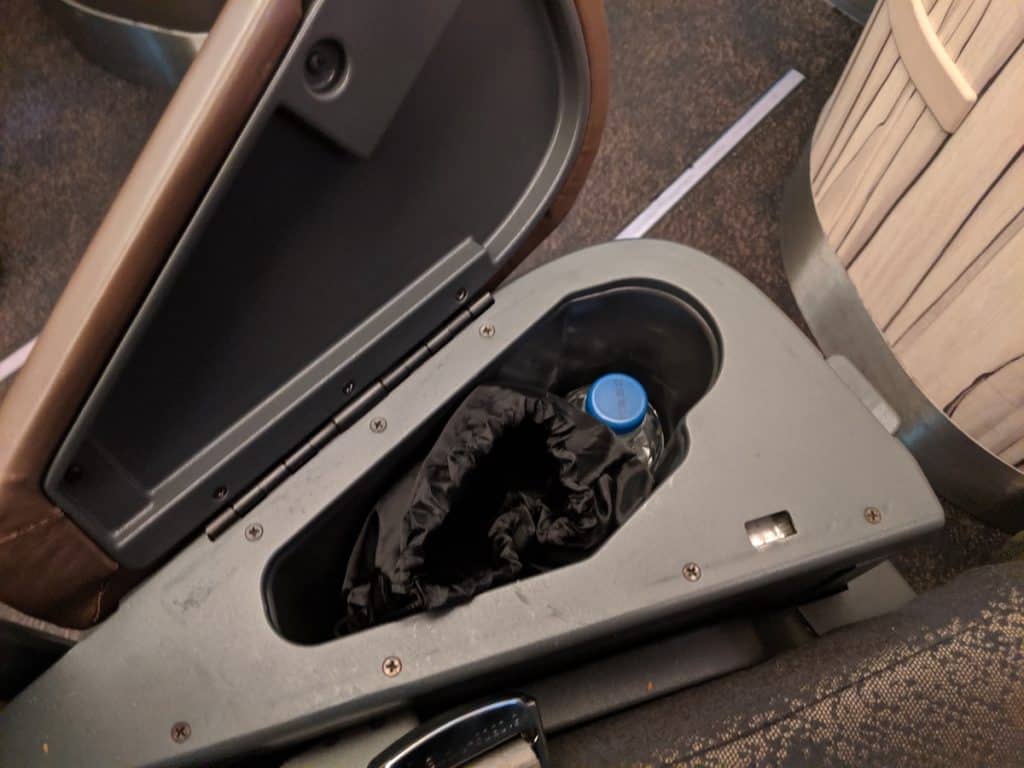 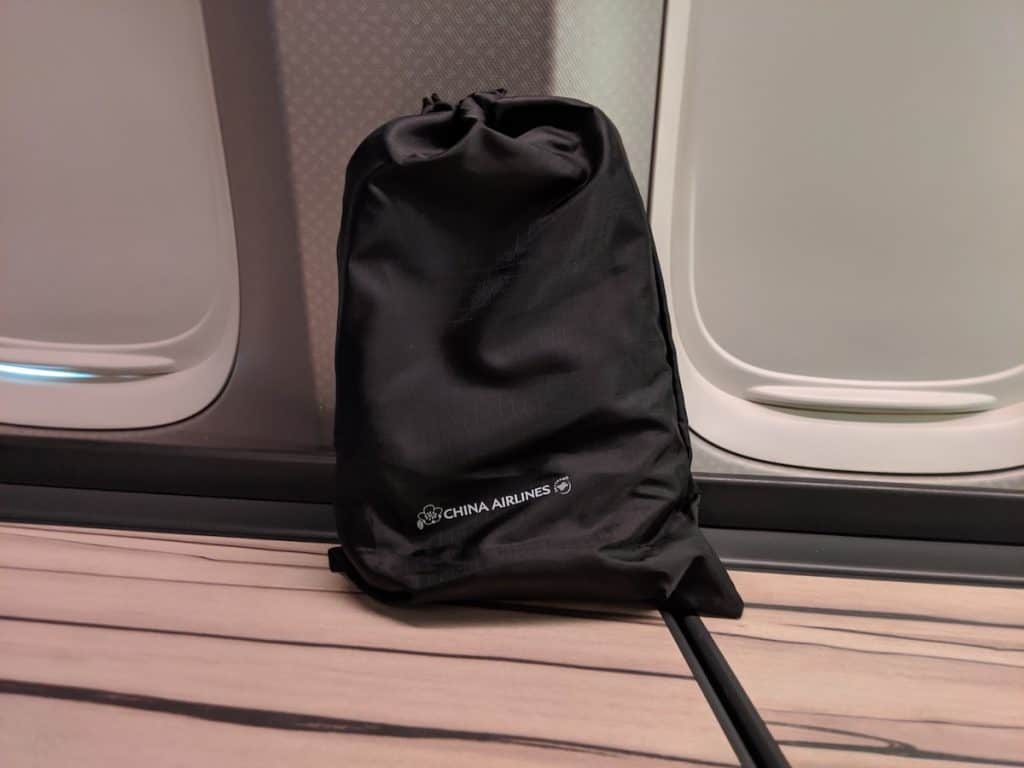 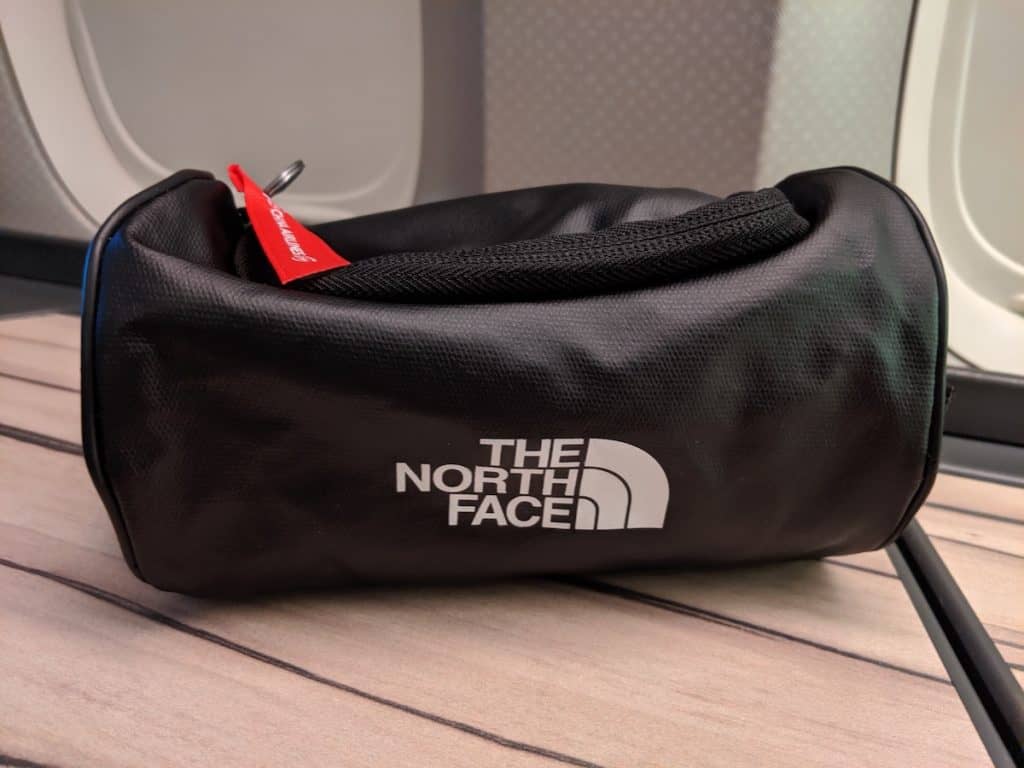 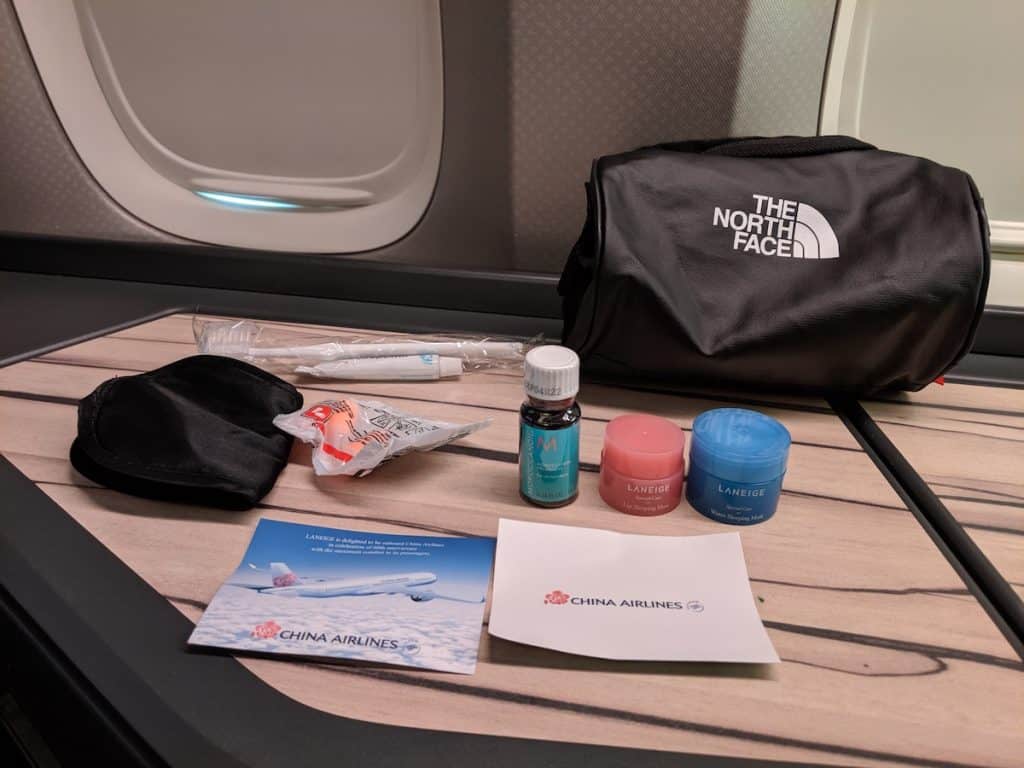 Headphones are also provided.  Of note, no pajamas are provided. 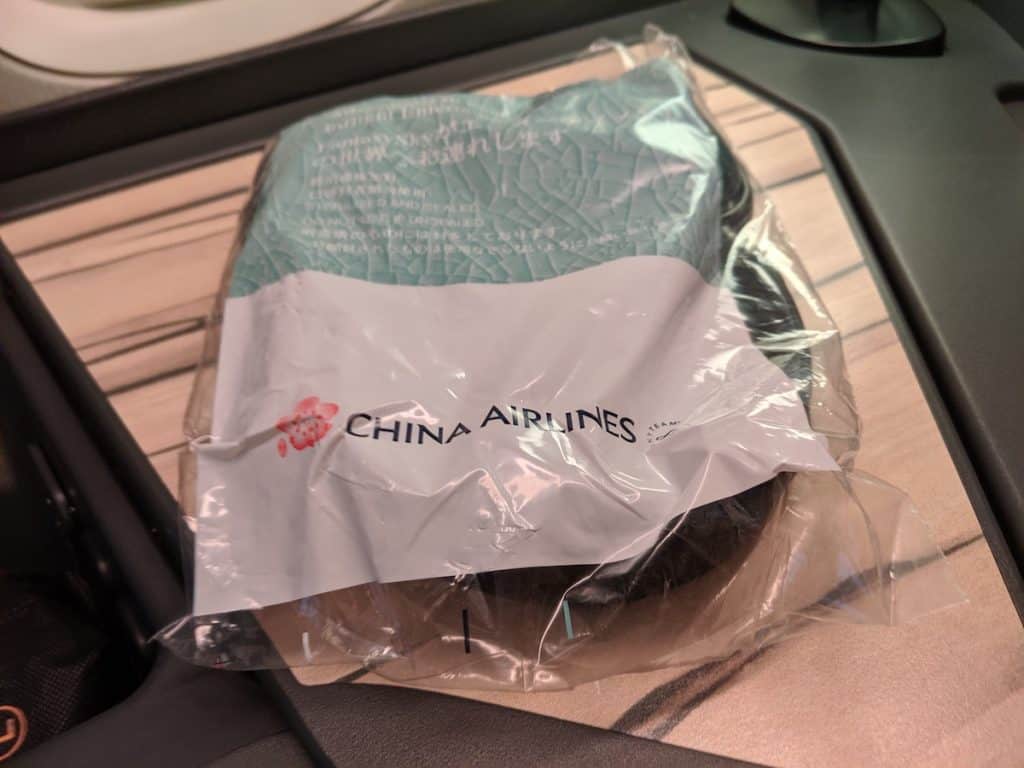 Before take off I was offered juice and a bag of Asian snack mix (rice crackers, dried wasabi peas, almonds, etc).  I probably ate at least six of these snack mix packets, they are delicious. 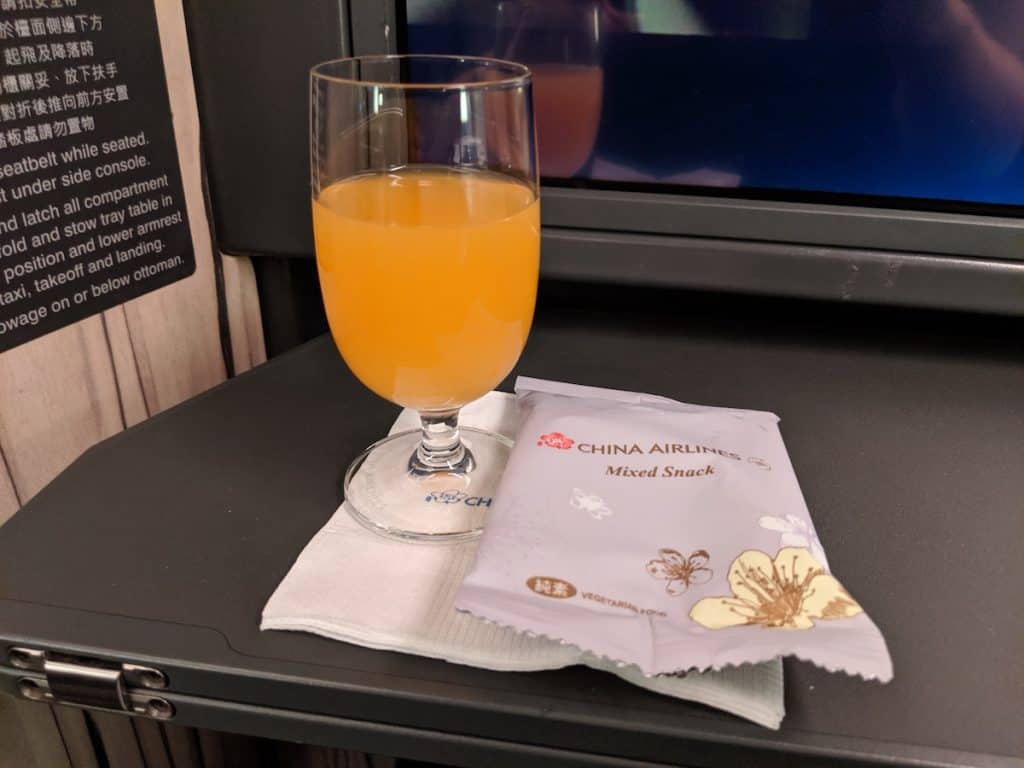 Menus were provided before take off as well.  The menu covers are artistic with the color portions textured. 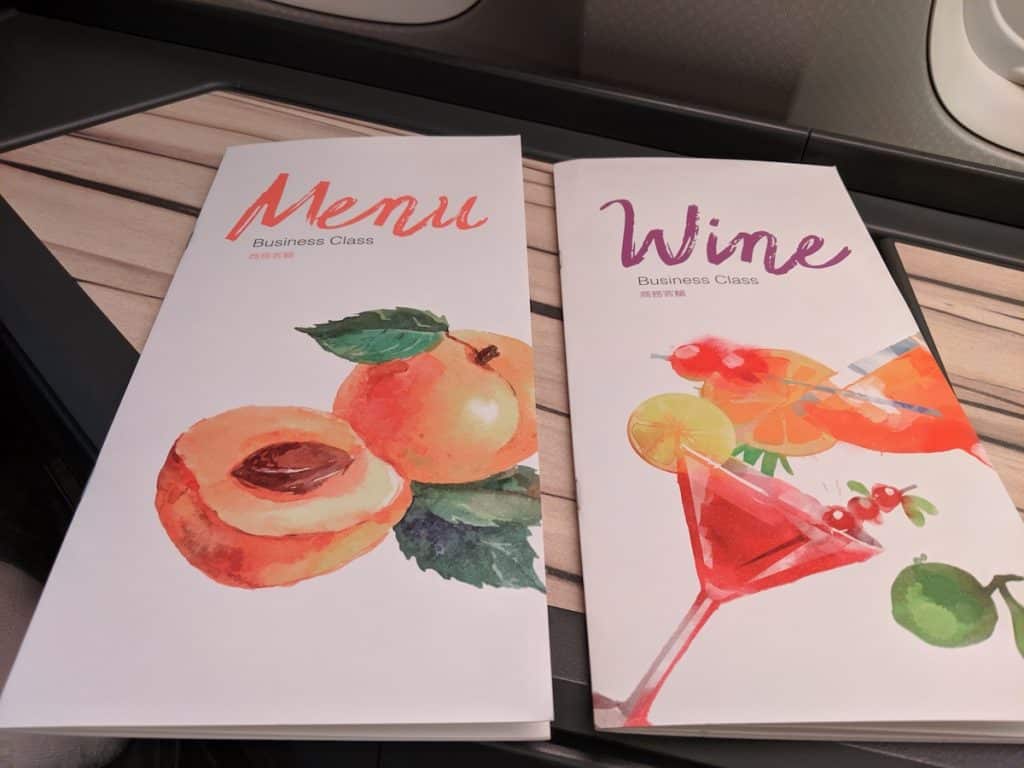 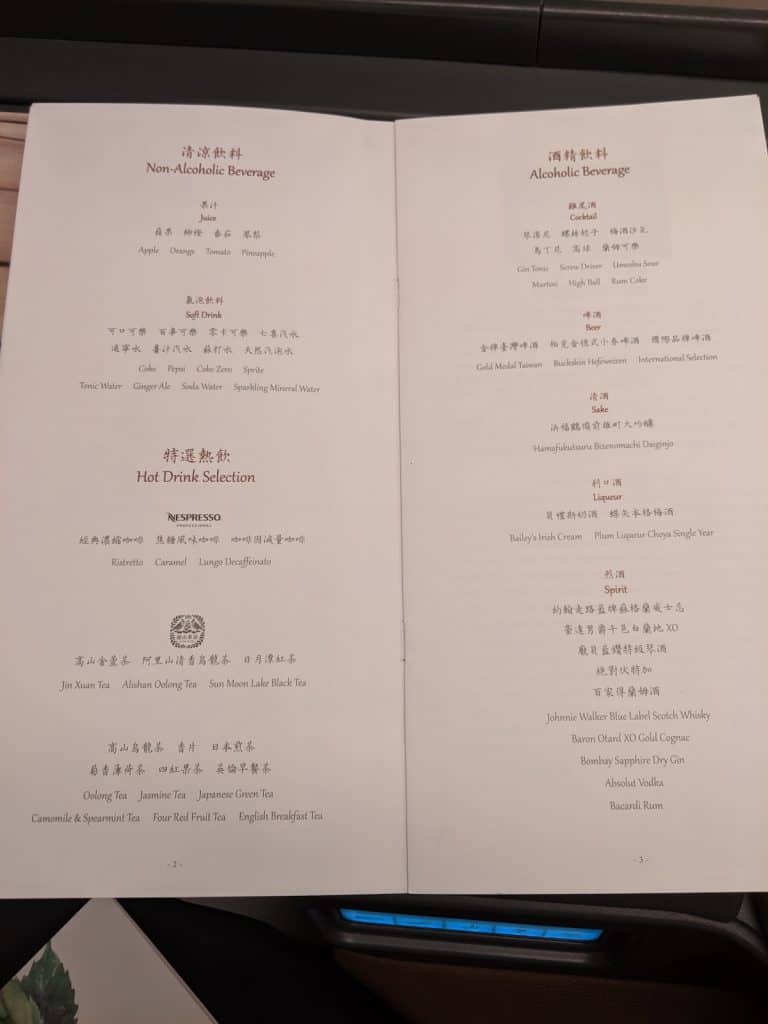 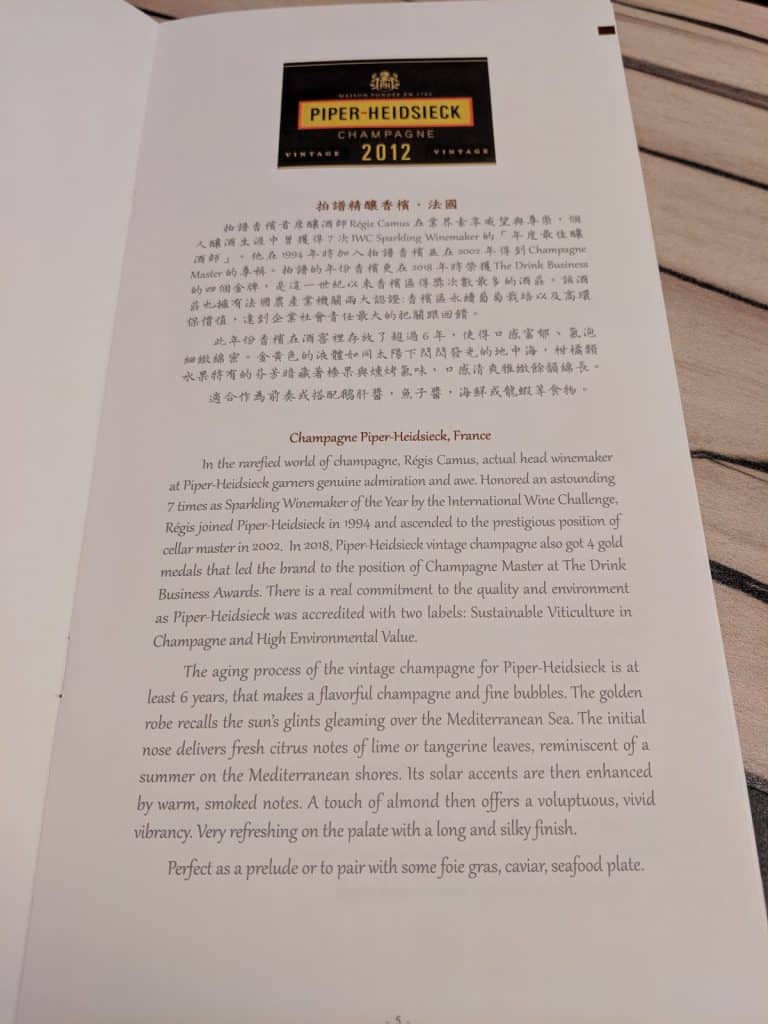 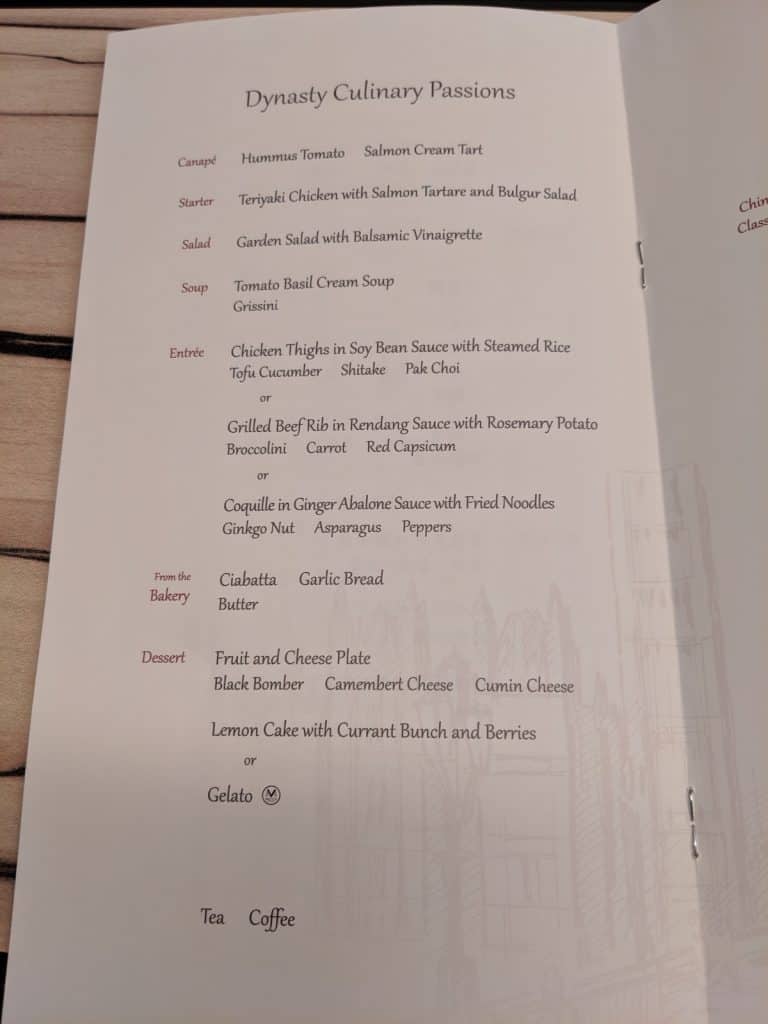 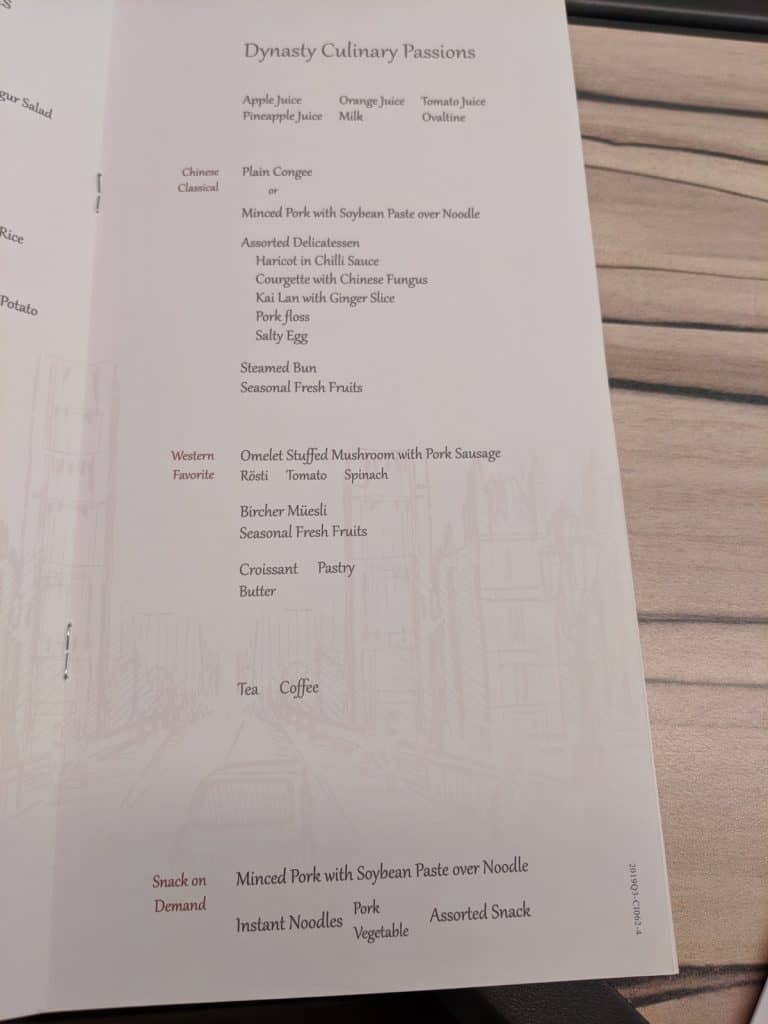 For the meal I selected the chicken dish.  Below are the various courses.  Presentation was beautiful and right up there with other First Class flights have taken.  Definitely orders of magnitude better than food in Business Class on Iberia or British.  I actually thought that the main course was the weakest link in the food but was still very well done. 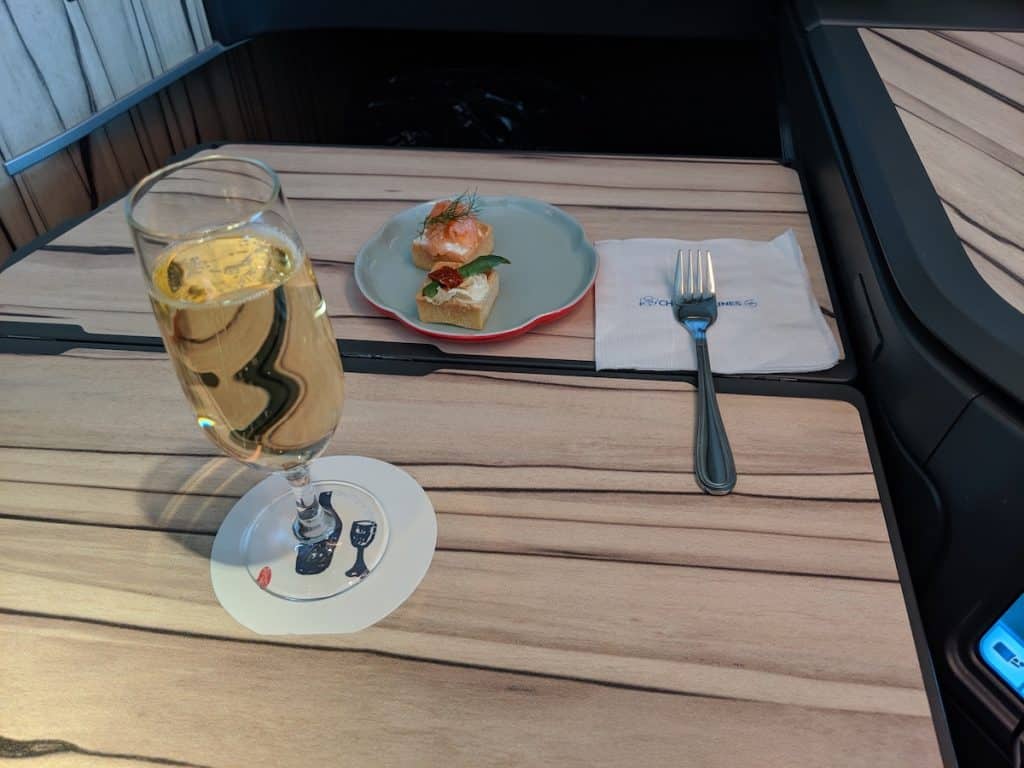 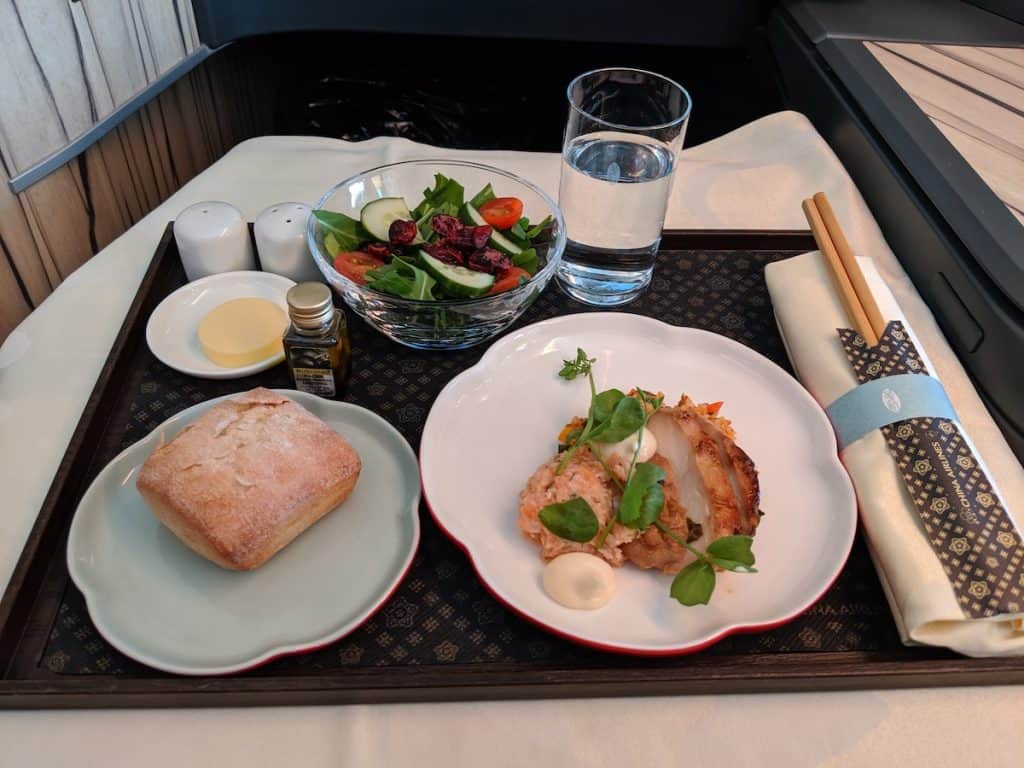 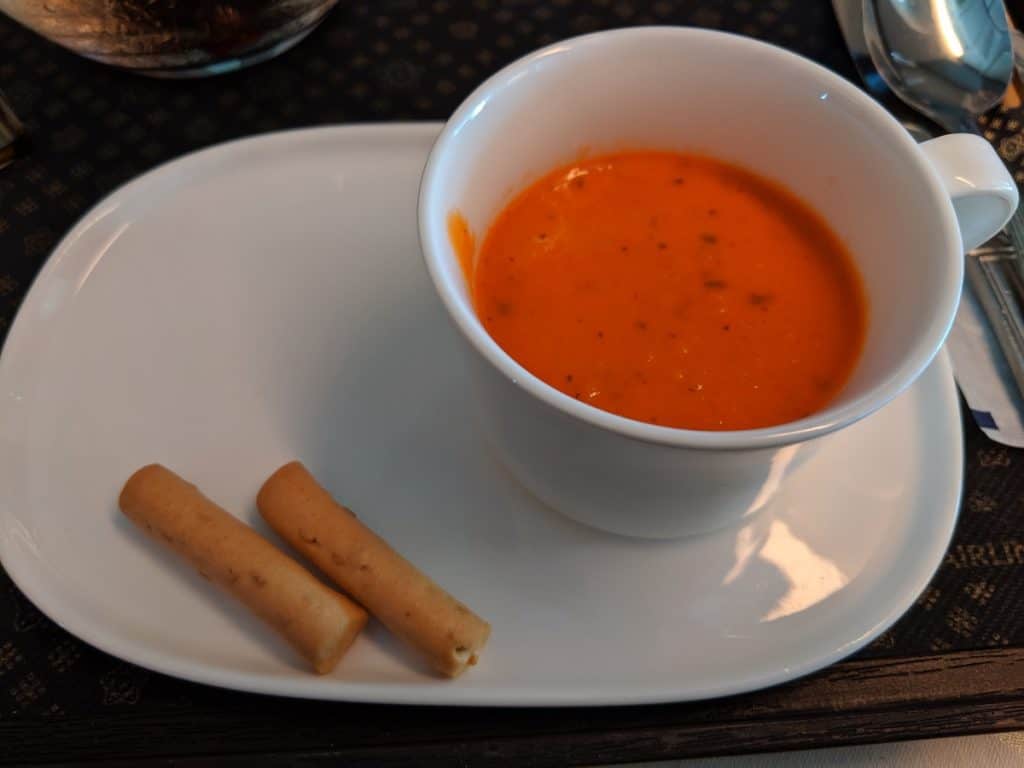 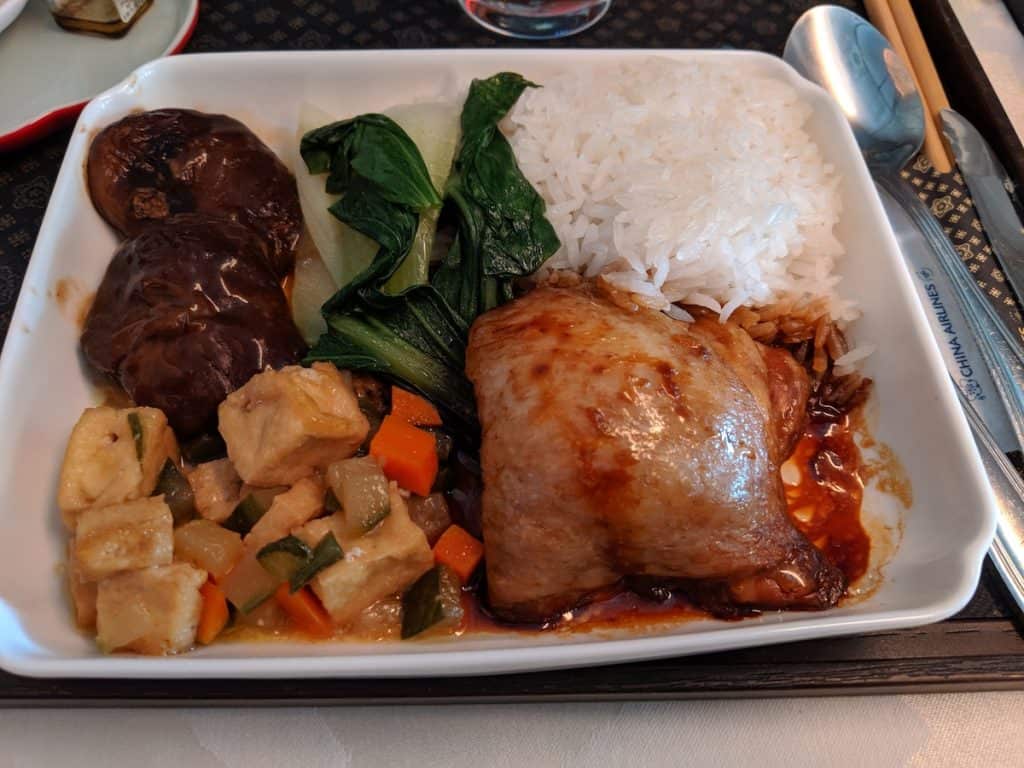 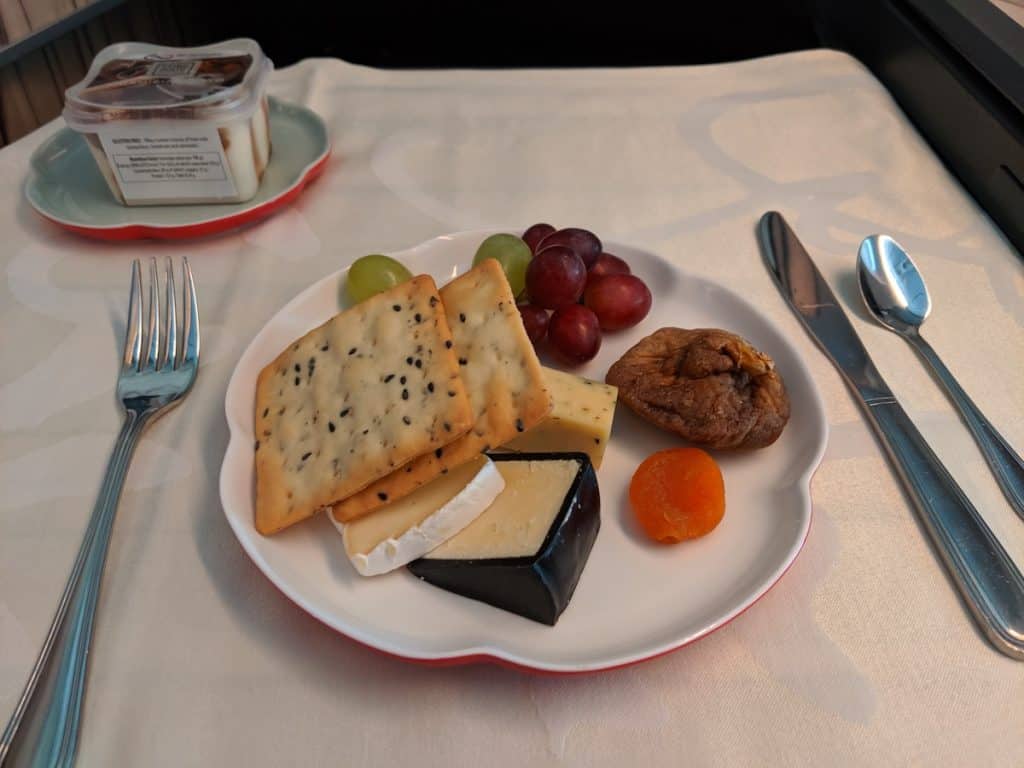 Between the Business Class cabin is a snack area that borrows elements of a library.  Unfortunately opposite of the lovely layout is the galley so it isn’t an area you would want to hang out in. 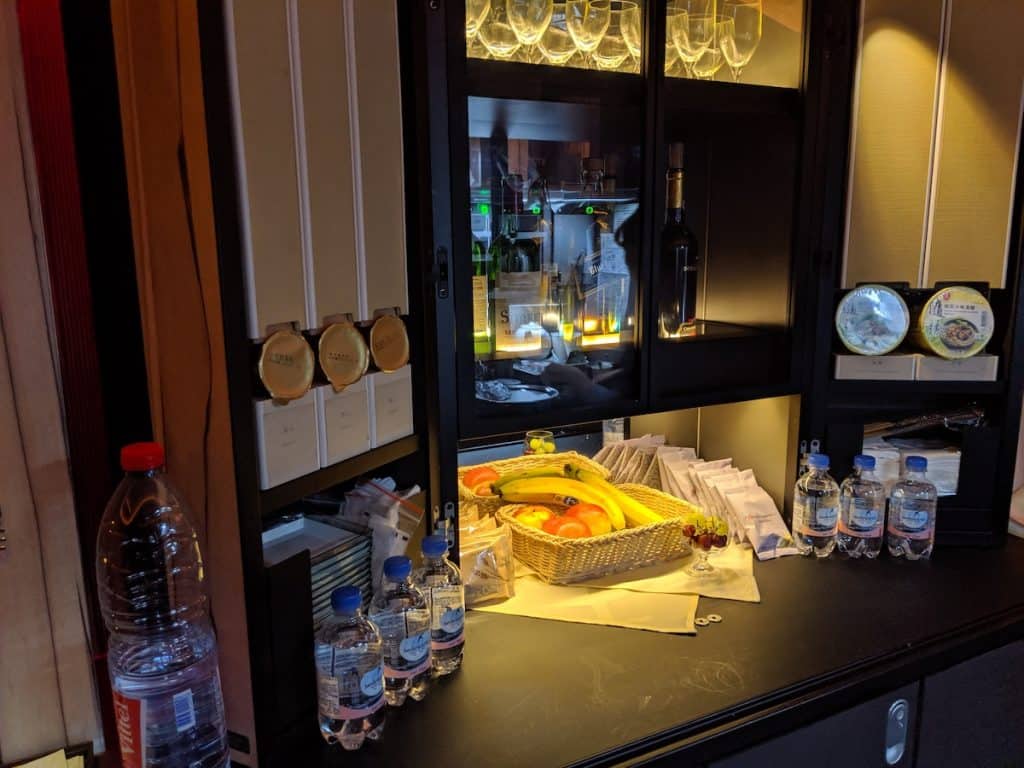 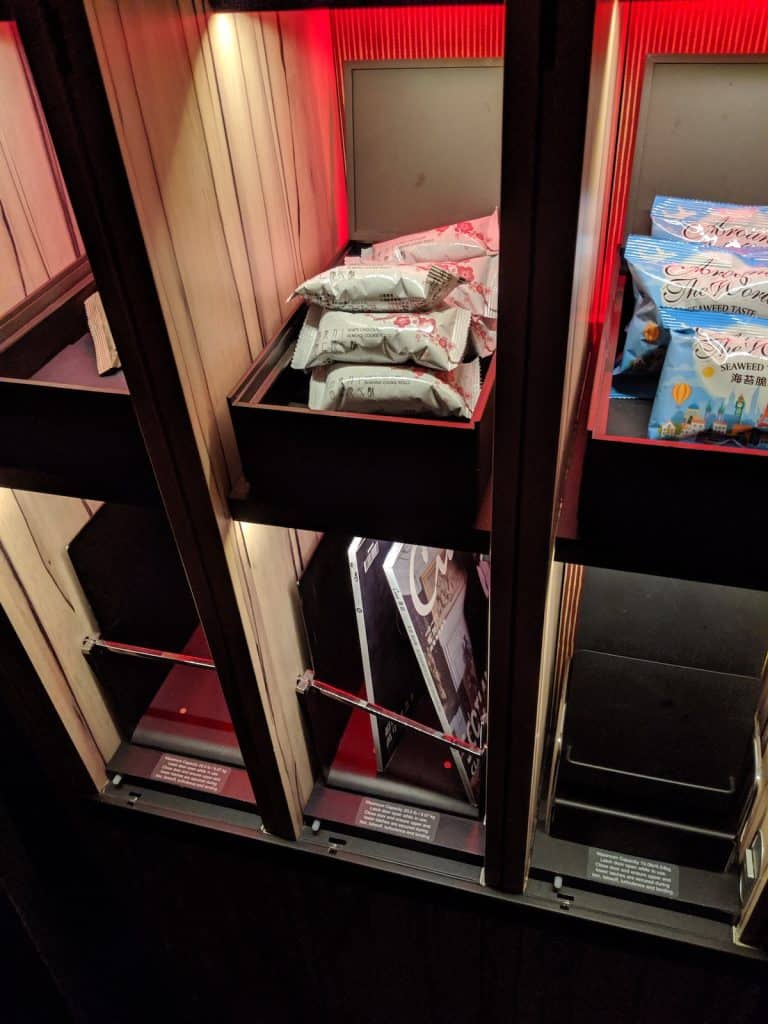 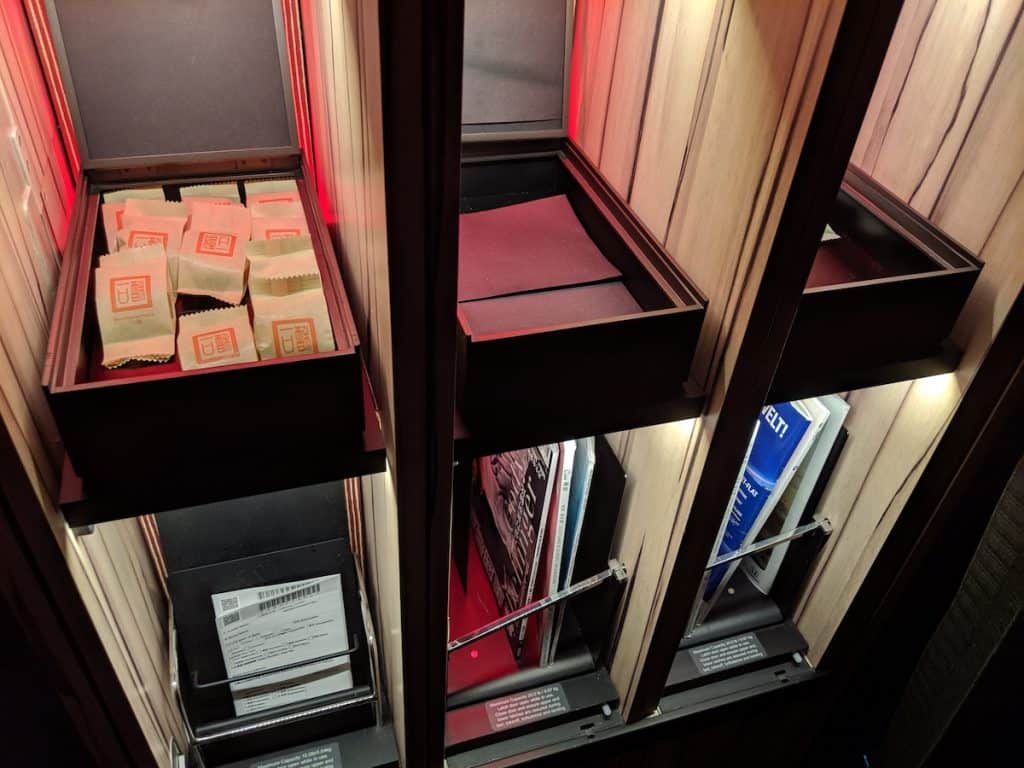 I thought the lavatory was one of the best I’ve seen on a plane (photo doesn’t do it justice – but you can see one of the walls is Taiwanese art).  They even have music piped in (which I don’t think I have seen on an airplane before). 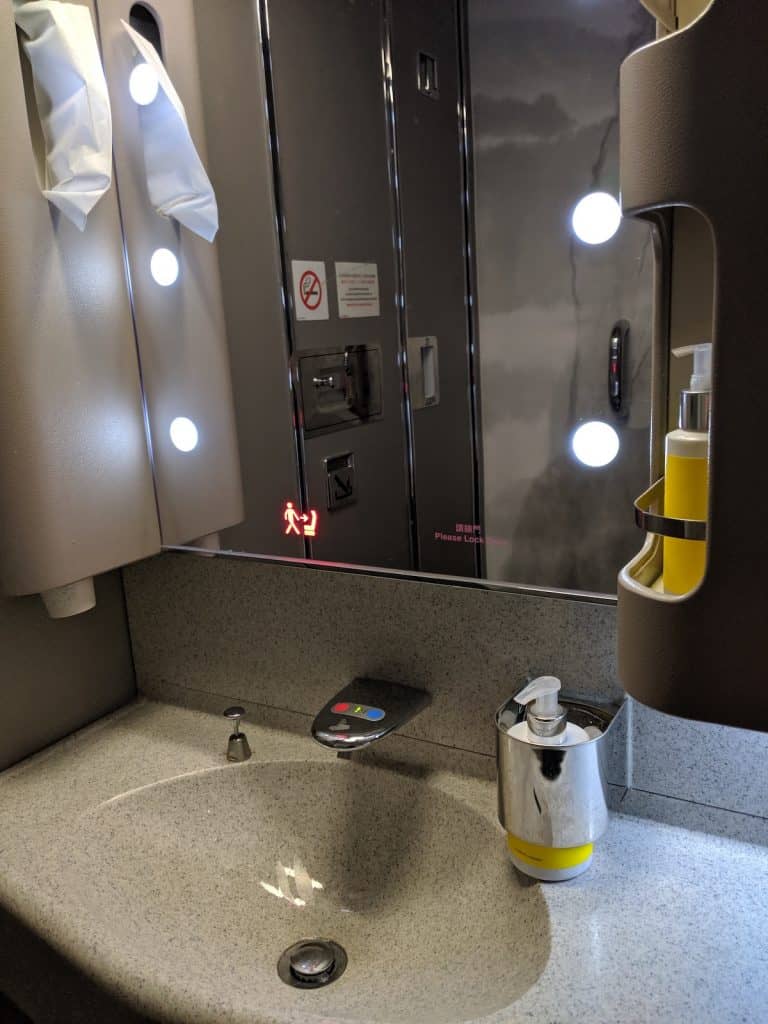 When I was ready to get some sleep, the flight attendant converted my seat into a bed with duvet and additional pillow.  There is no mattress pad, so you are sleeping directly on the seat. 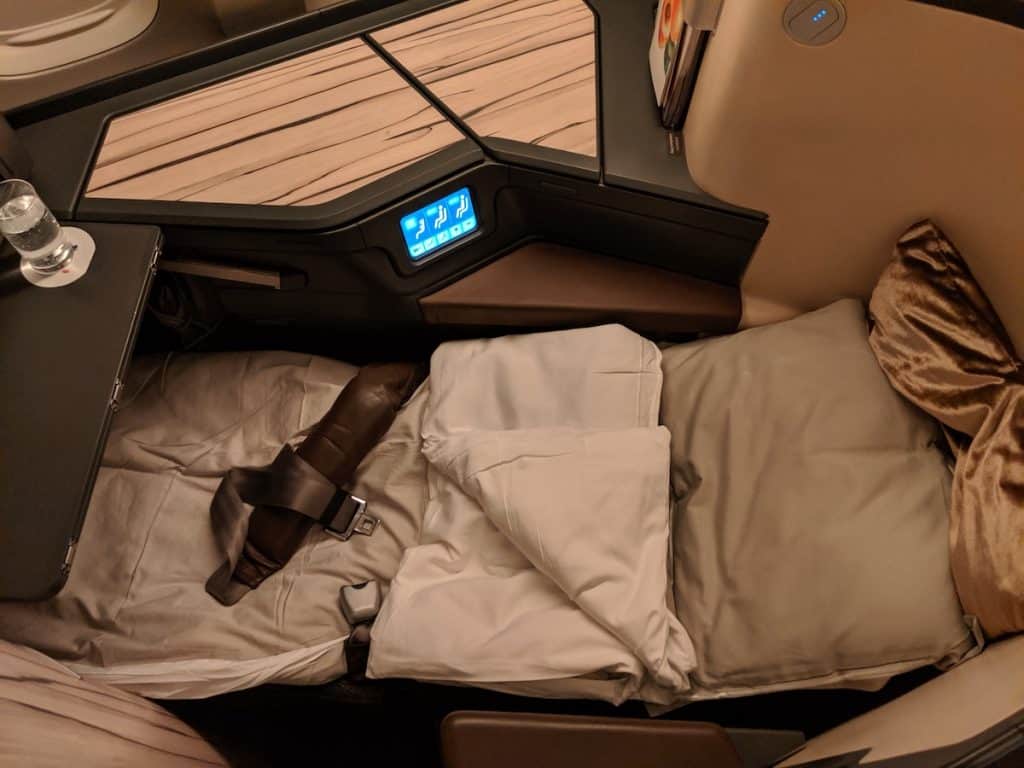 For breakfast I went with the Western option and was again impressed by the quality. 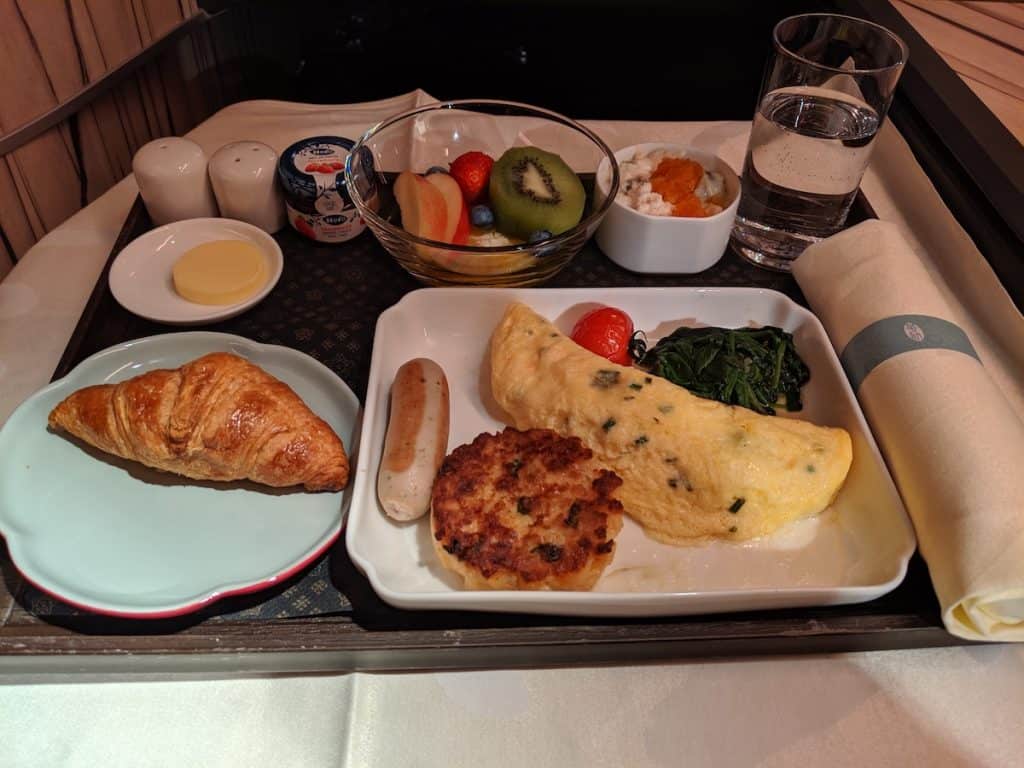 I found the service to be excellent, again what you would expect from an Asian based luxury airline.

China Airlines (based in Taiwan, not China)is a member of the SkyTeam alliance.  Delta miles can be used to redeem Business Class flights.  For the second half of my ticket, I was able to try out Business Class on the new A350 from Taipei to Hanoi.