After one night in Kiev, I had a late night layover at Frankfurt before departing for Taipei.  I would be arriving at the hotel around midnight with my flight the next morning at 11:20.  I decided to use 35,000 Hilton points to book a night at the Hilton Frankfurt Airport as it is walkable to the Terminal (kind of).

I arrived and departed from Terminal 2.  It is a bit complicated to connect from Terminal 2 to the Hilton and takes a surprisingly long time and either a bus or train ride connection with Terminal 1.  You could walk it but it really isn’t set up for that. 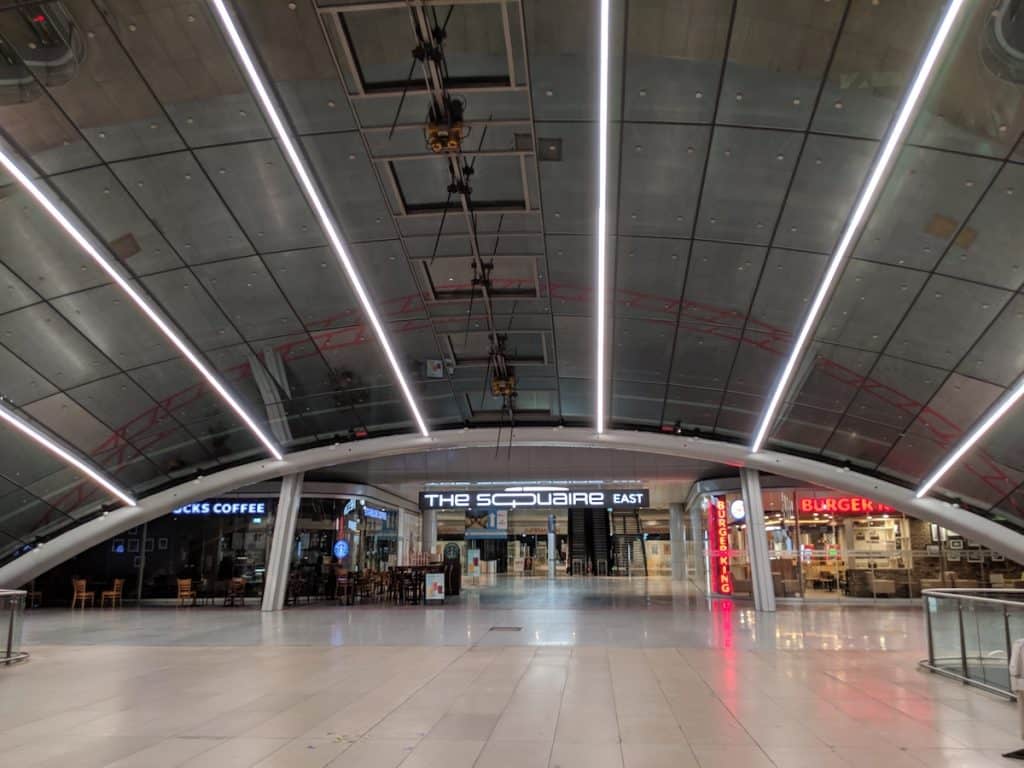 I am going to venture a guess that the off site properties would be as quick, if not faster, to get to if you are coming/going through Terminal 2, though you are captive to a hotel shuttle or Uber. 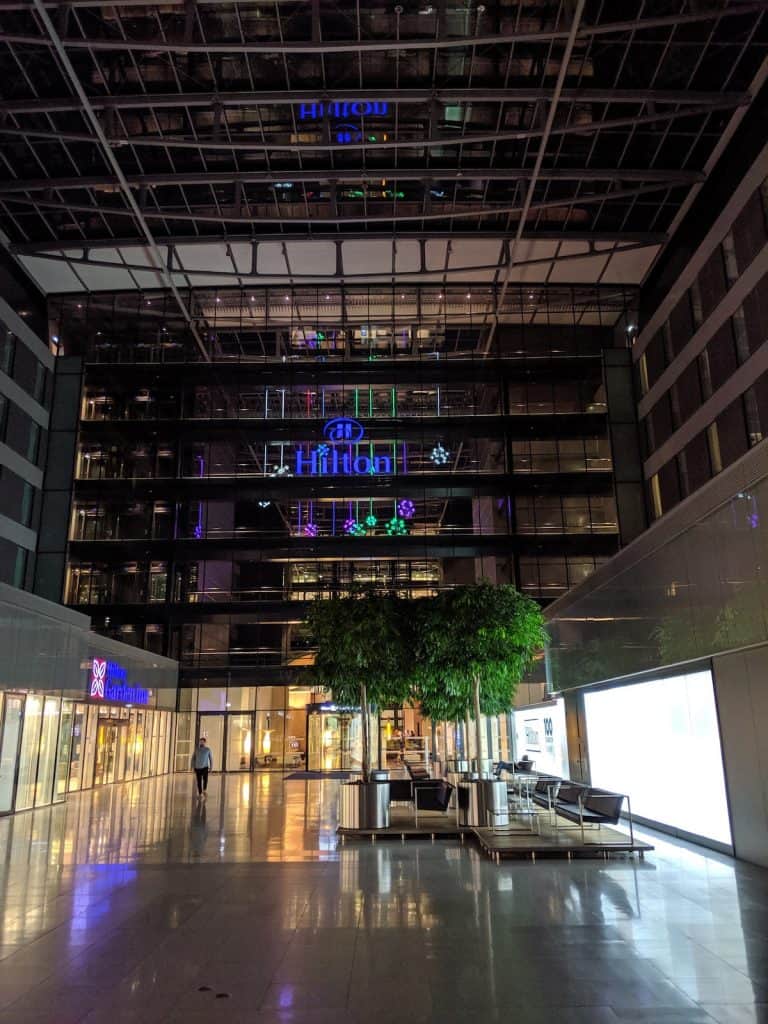 As I arrived just before midnight, I was the only person checking in.  It is clear that they are used to tired travelers as they make your check in as quick as possible.  You do have to pay a €2 tourist tax unless you are on business, even on award stays. 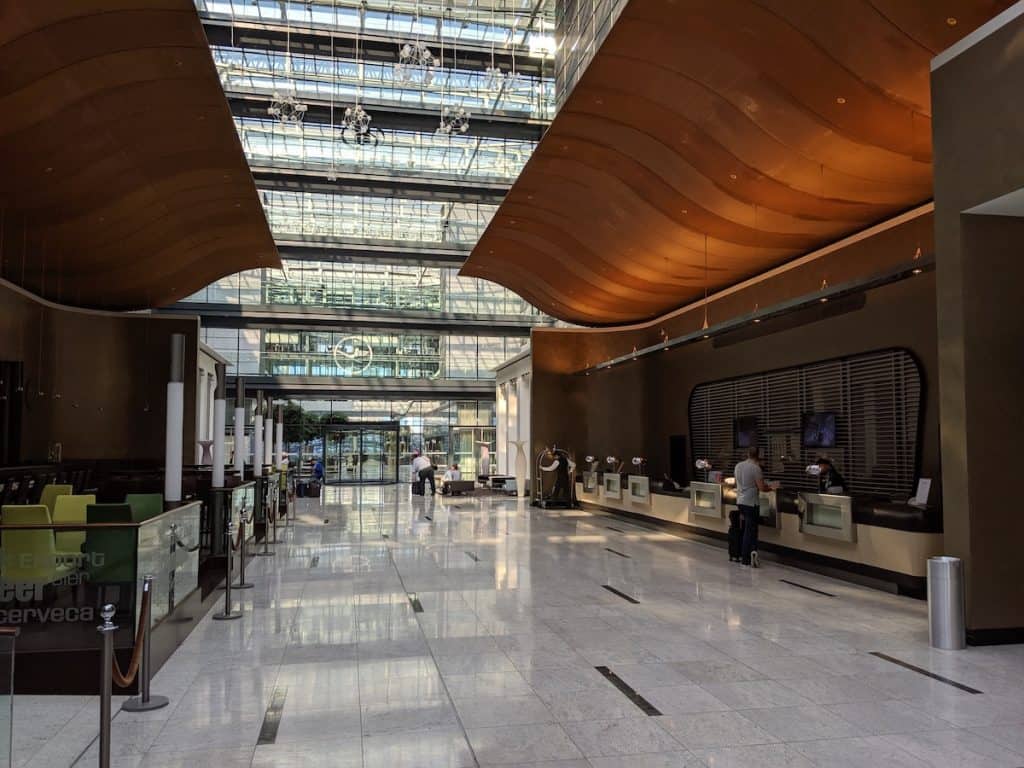 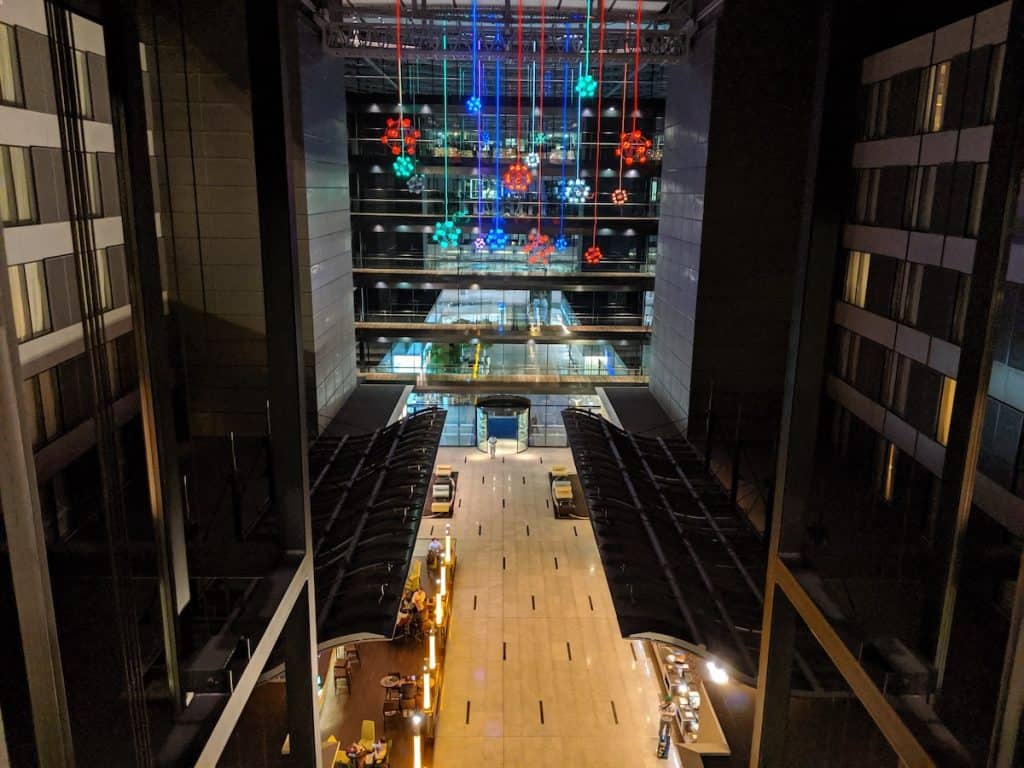 I had picked out my room (9167 ahead of time) and was told that I could have two bottles of water from the mini bar complimentary as a Hilton Honors member.  It was also explained I could have breakfast in the lounge or restaurant. 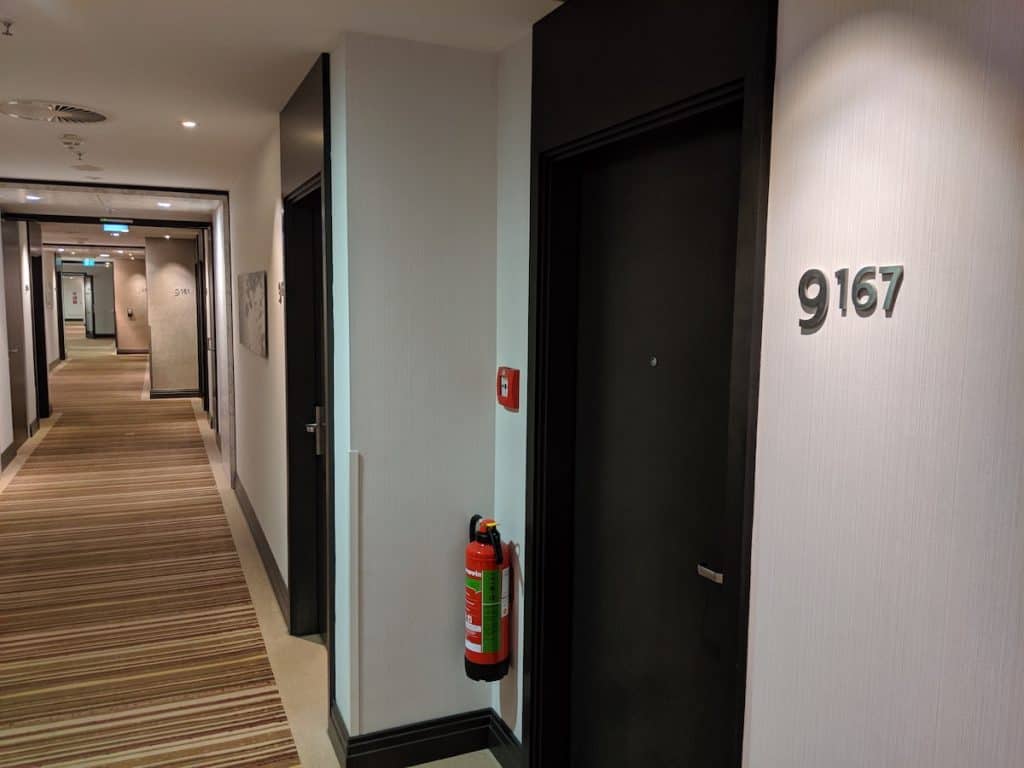 As the property is an atrium hotel, some of the rooms (I believe the even numbers) look out on the lobby.  I picked my room as it looked outwards towards the airport.  However, the imposing Sheraton blocks any view except for from the top floor. 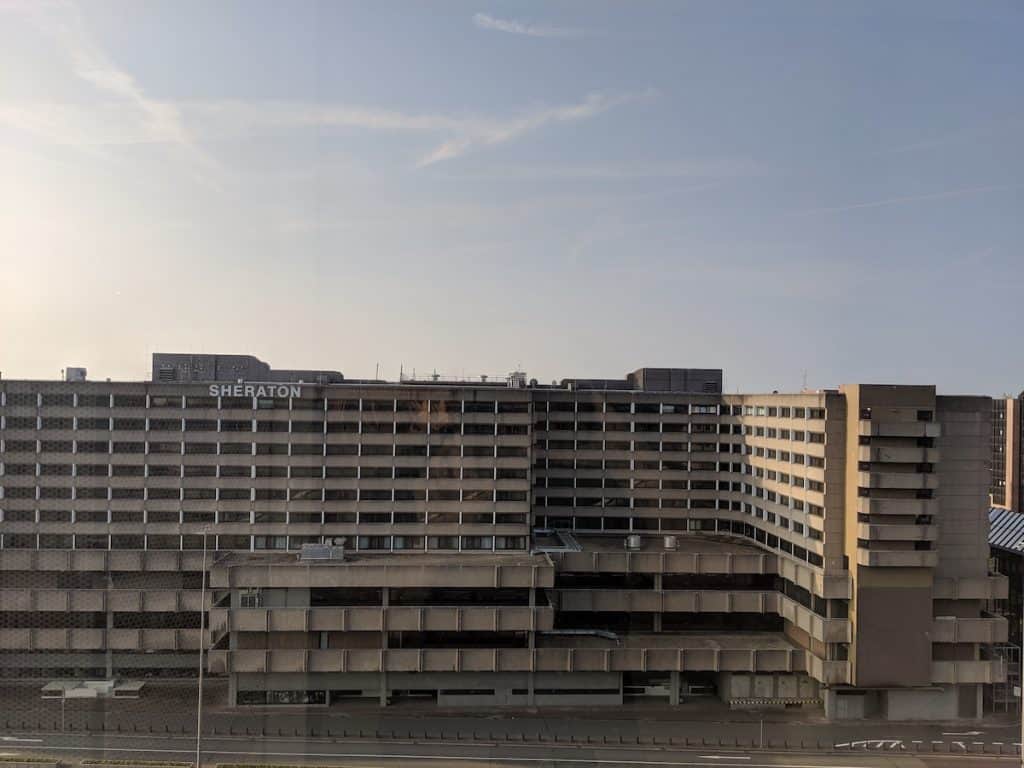 The room is a very non-offensive, standard business/airport hotel room. 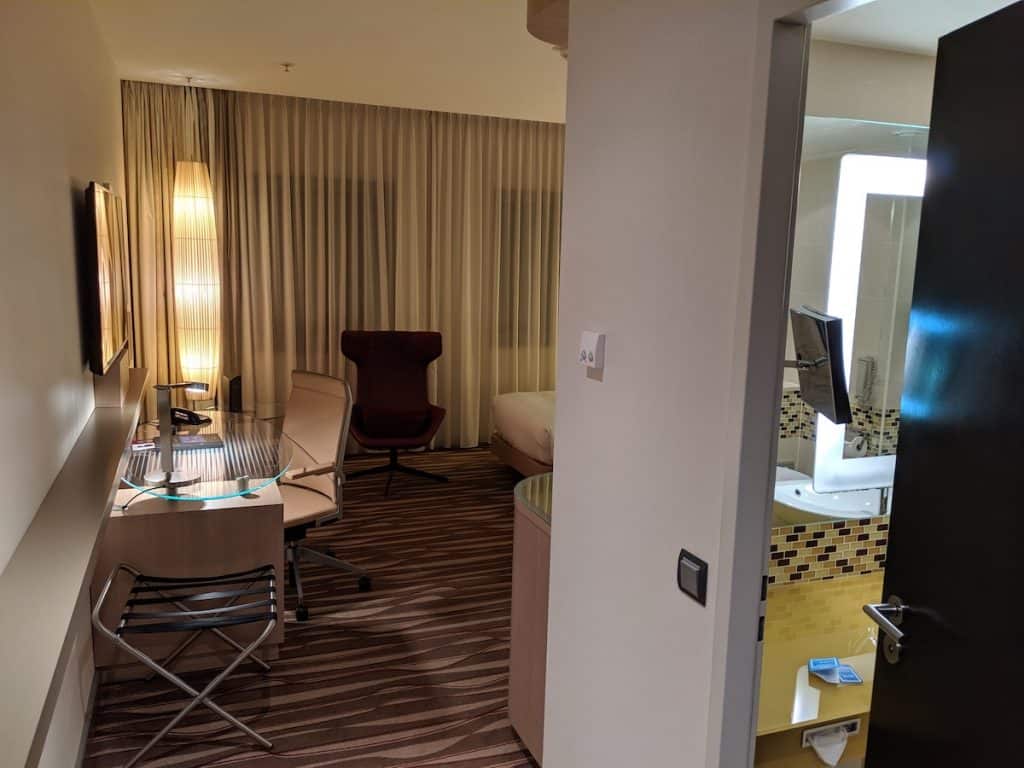 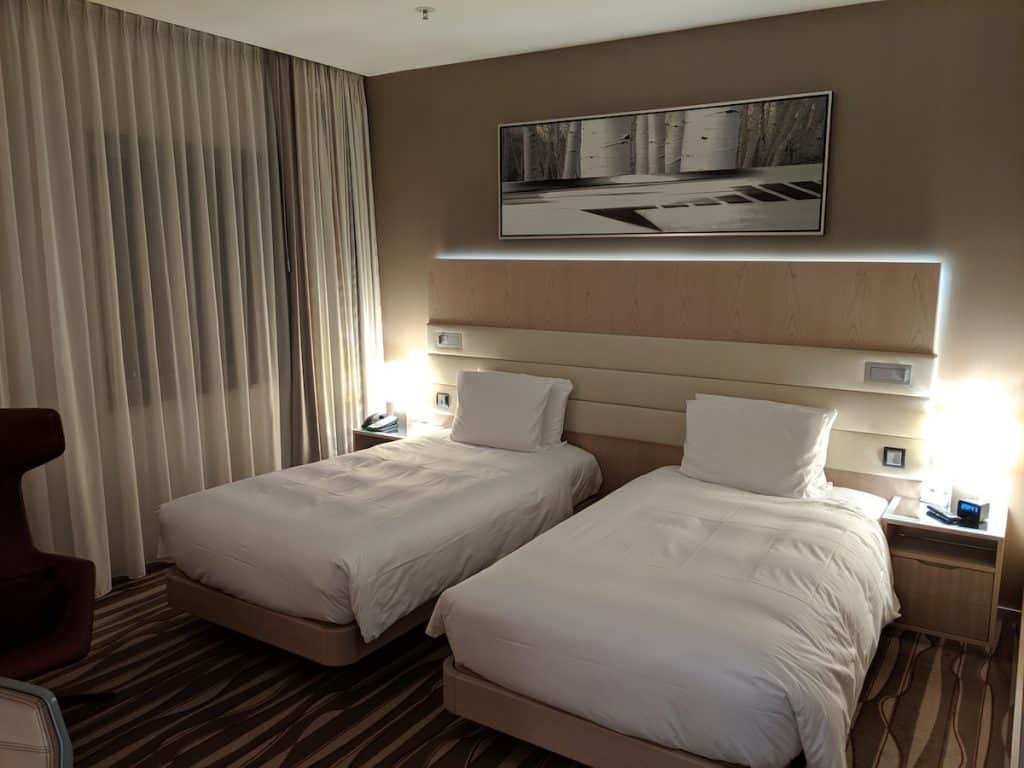 As you enter, the bathroom is on the right.  The room is small.  As I wanted a room facing towards the airport, the only one available had two double beds. 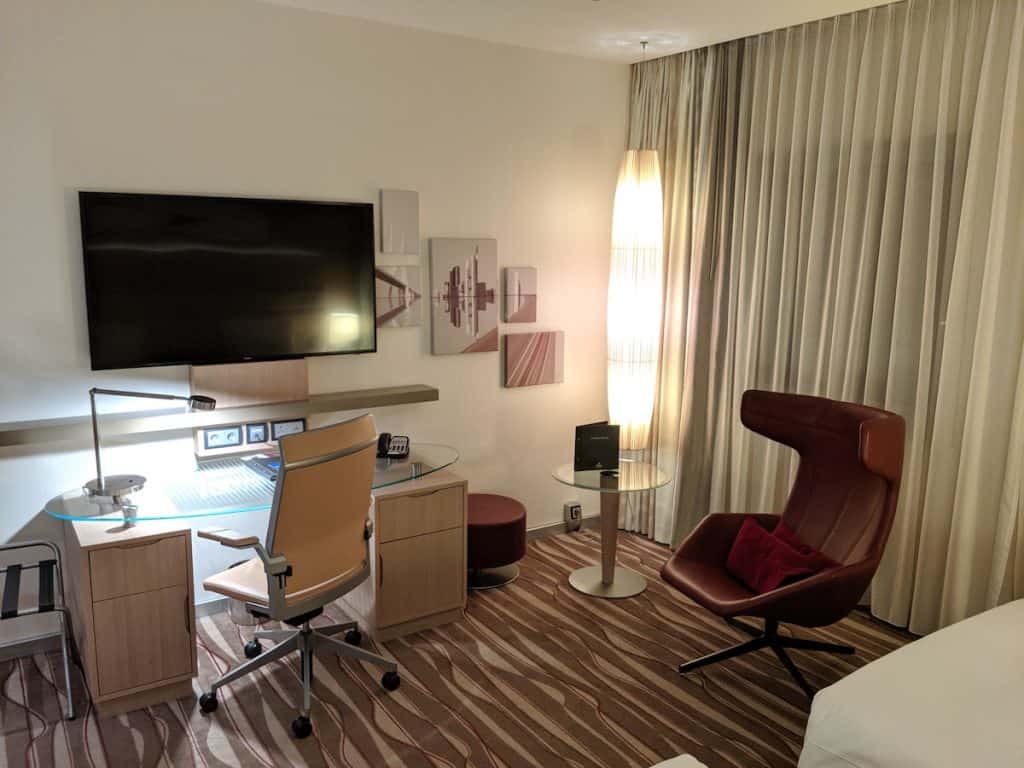 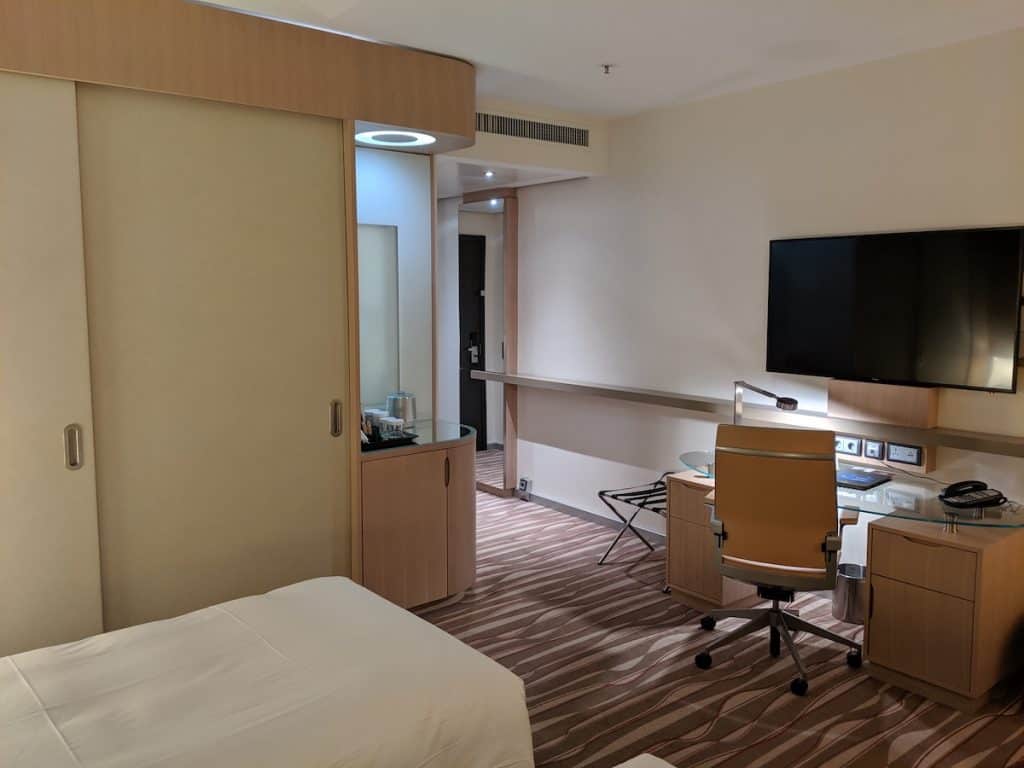 A large closet is along one side of the bed and windows along the other. 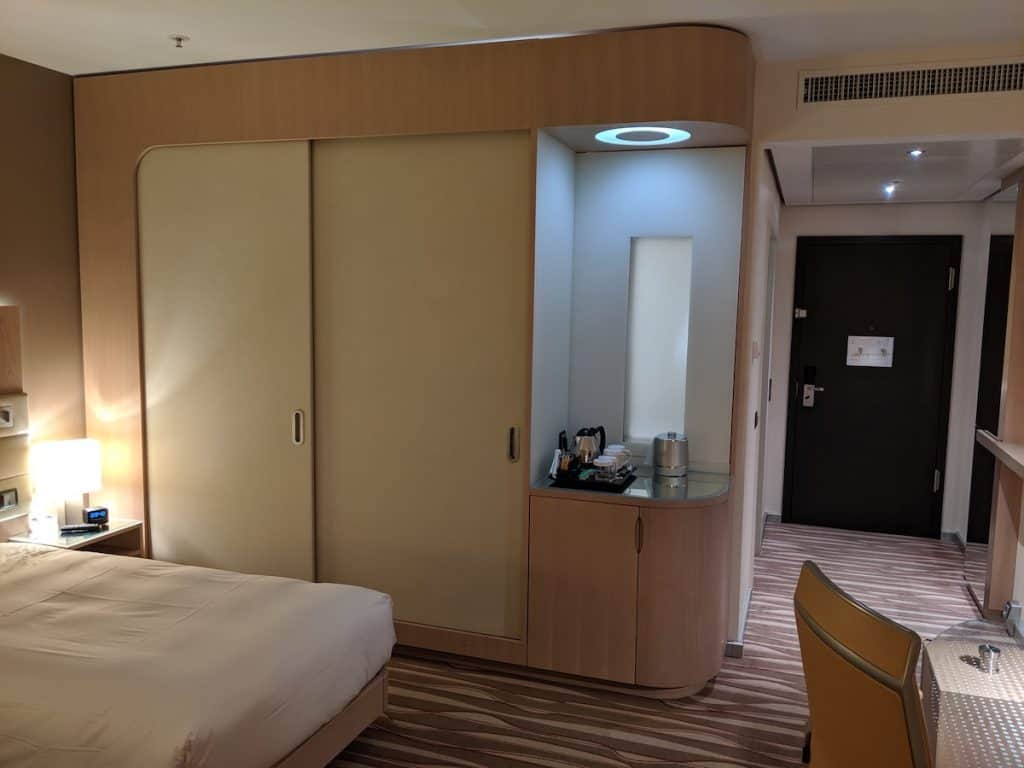 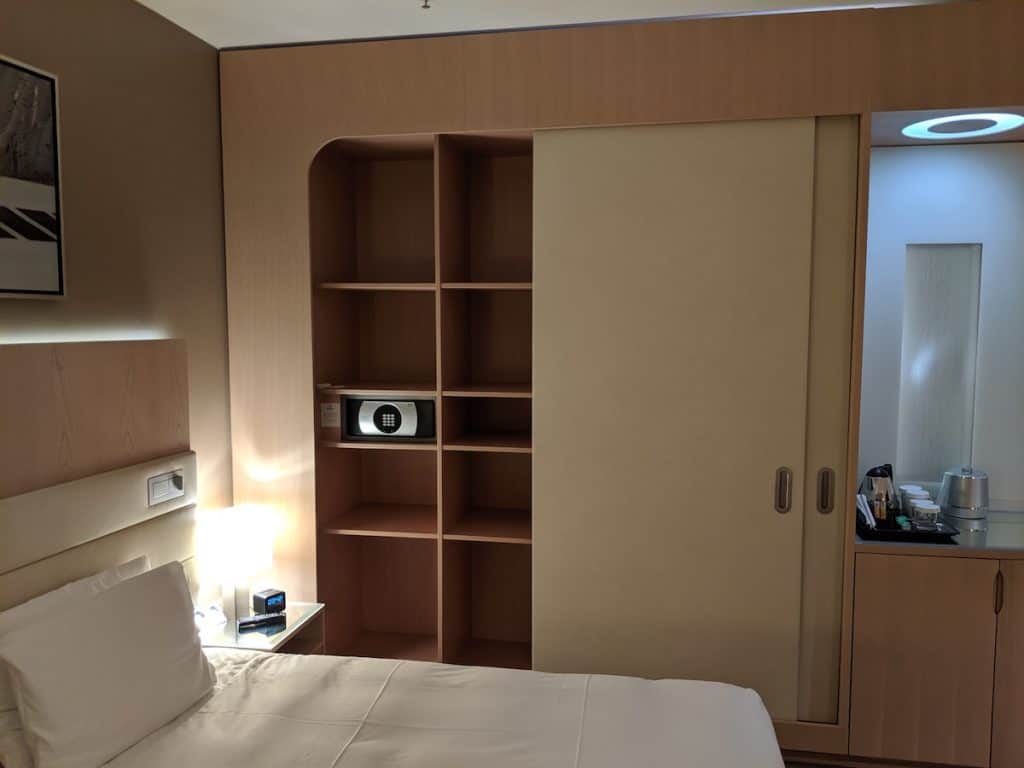 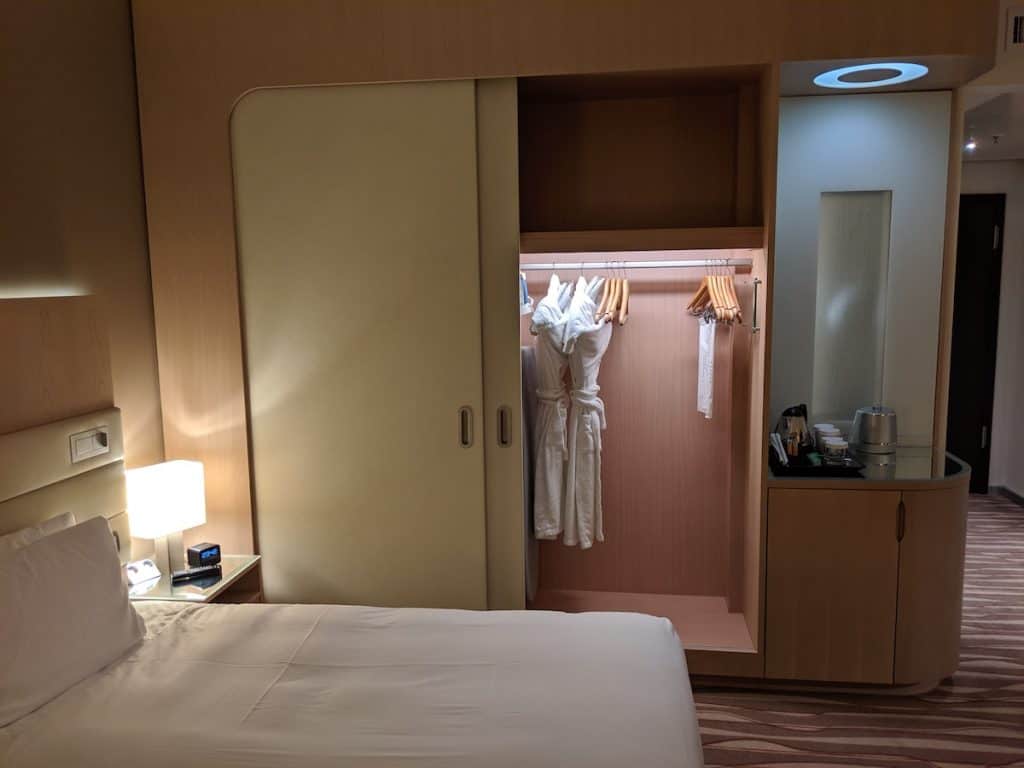 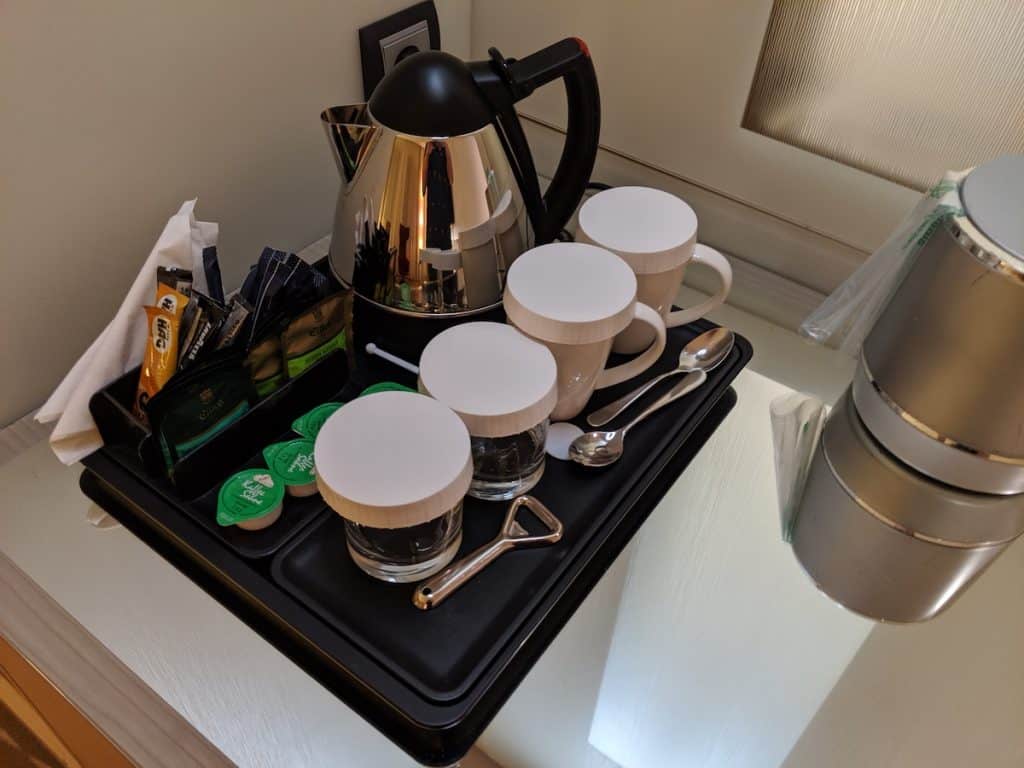 As the windows are separated by a solid portion of the exterior wall, the blinds can be drawn in such a way that the room is very dark.

The bathroom has a single vanity and separate shower (with only hand held wand) and tub. 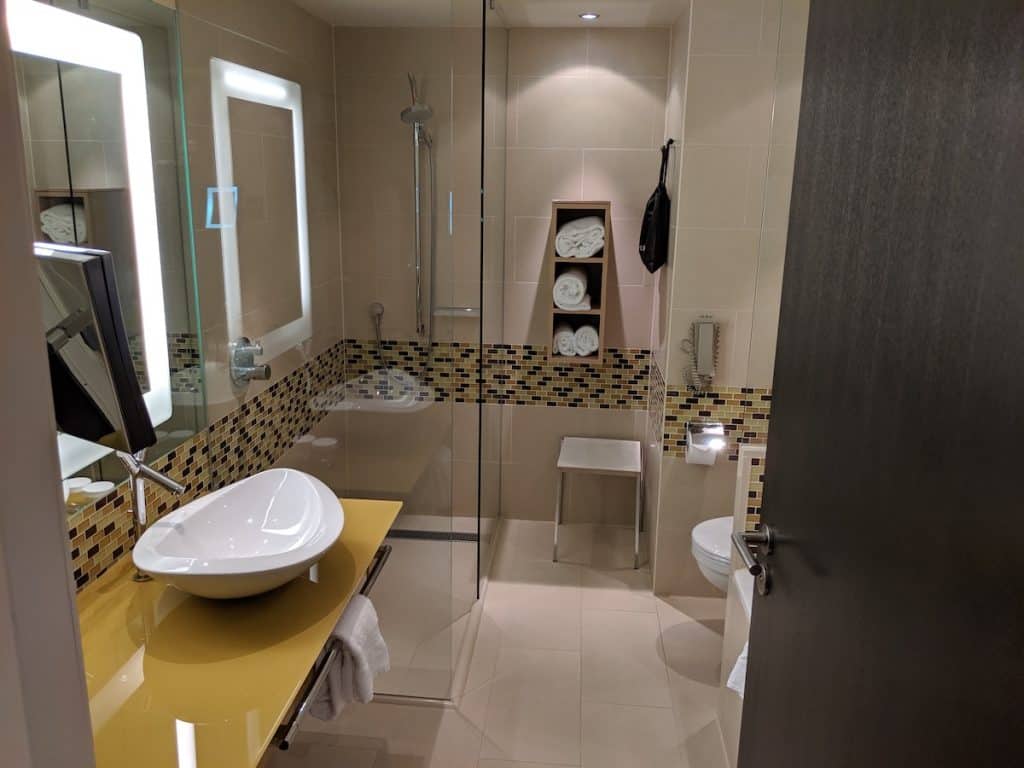 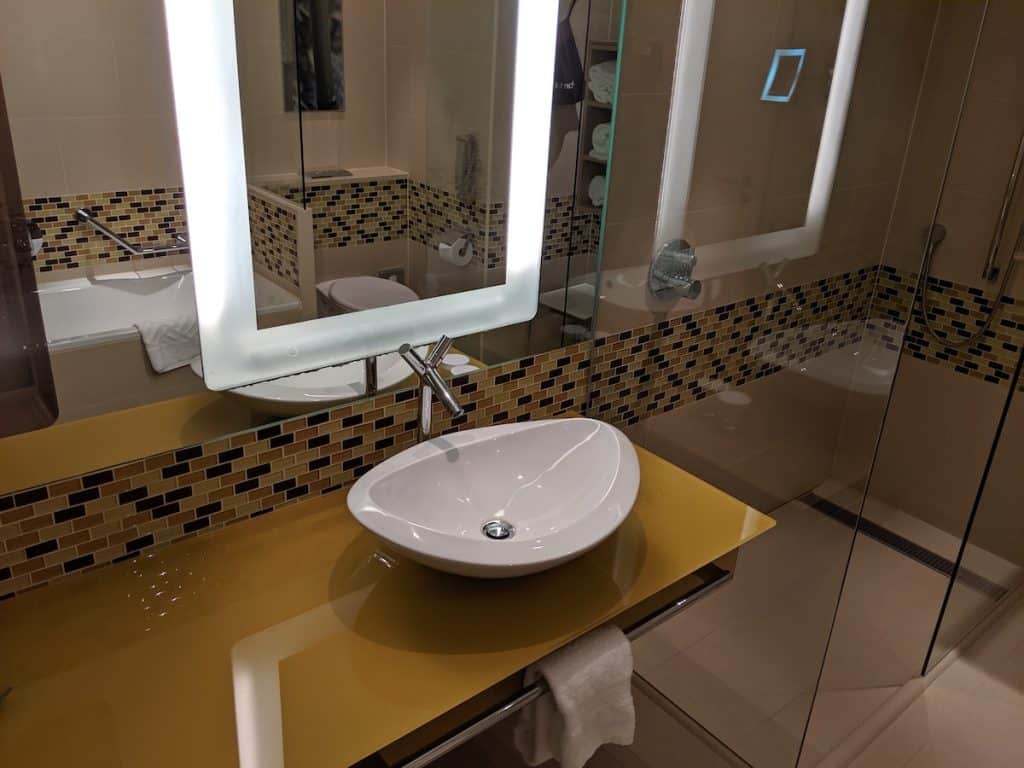 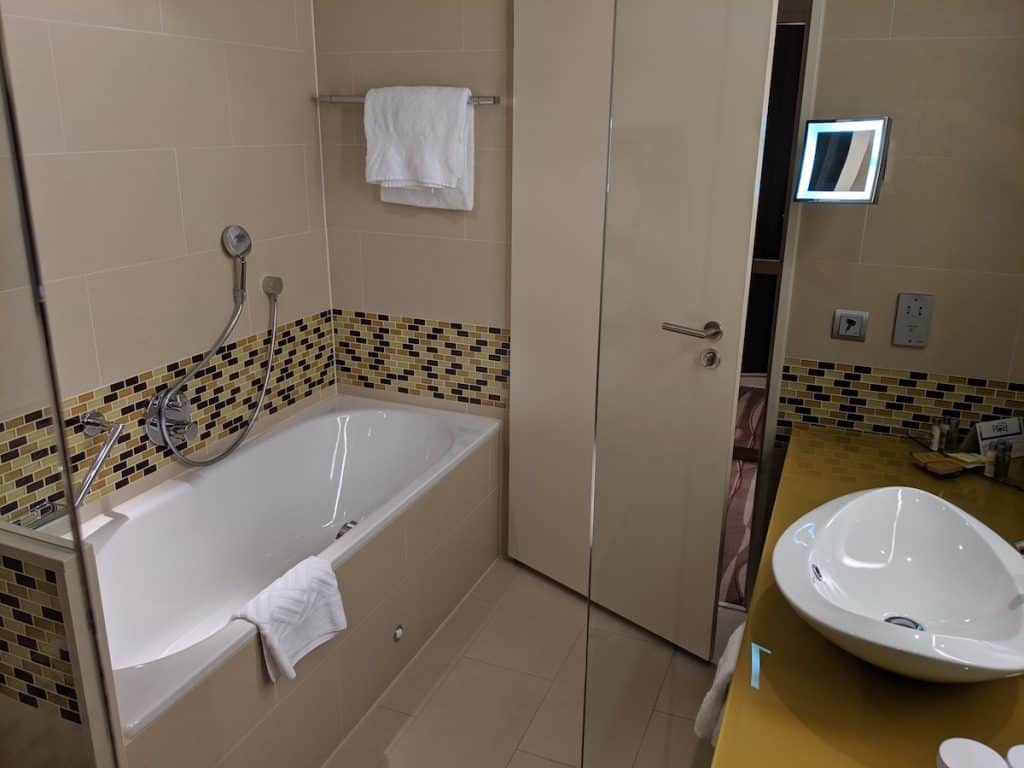 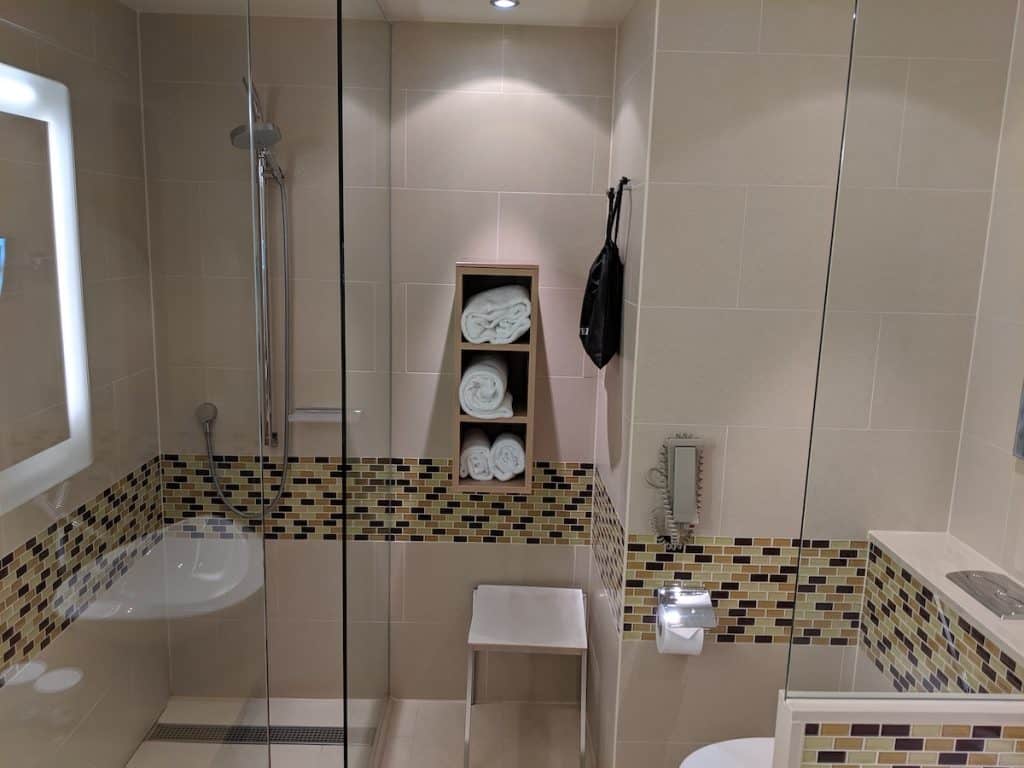 The shower has no door, which I prefer, however the shower stall is small enough that a lot of water escapes.  I did appreciate that the temperature and water control is on the wall away from the shower head and can be controlled prior to getting in.

The bath products are Crabtree & Evelyn. 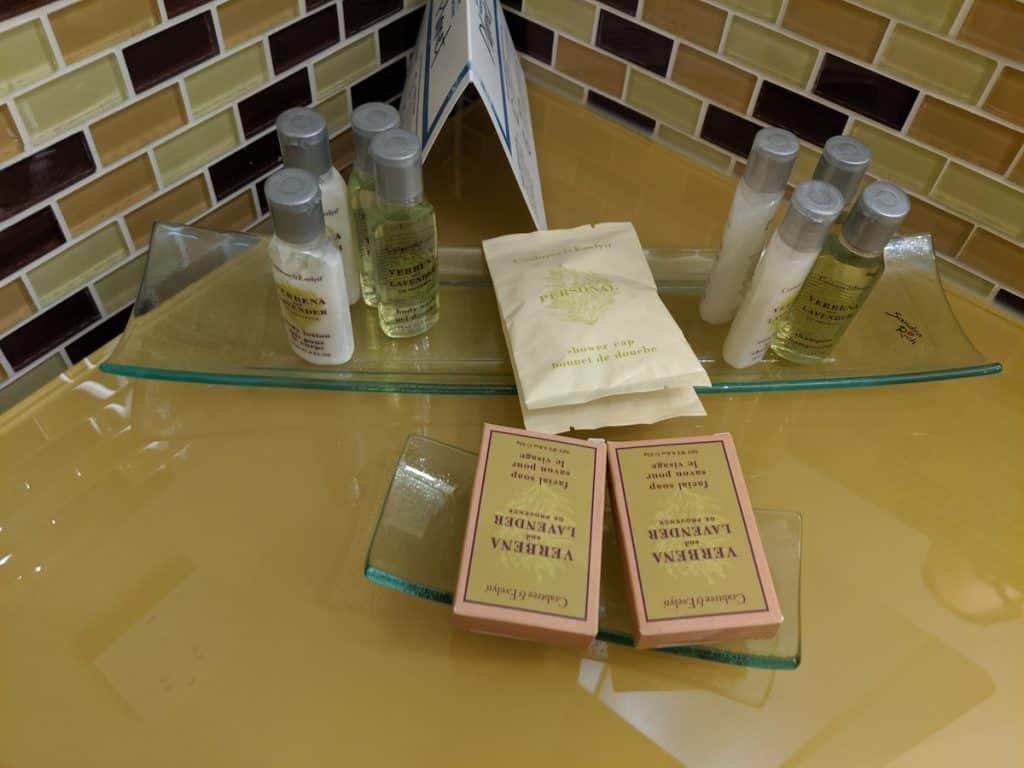 The large gym is located on the 11th (top) floor and does have a bit of a view of the airport.  It appears to be shared between the Hilton and Hilton Garden Inn.  There is no pool. 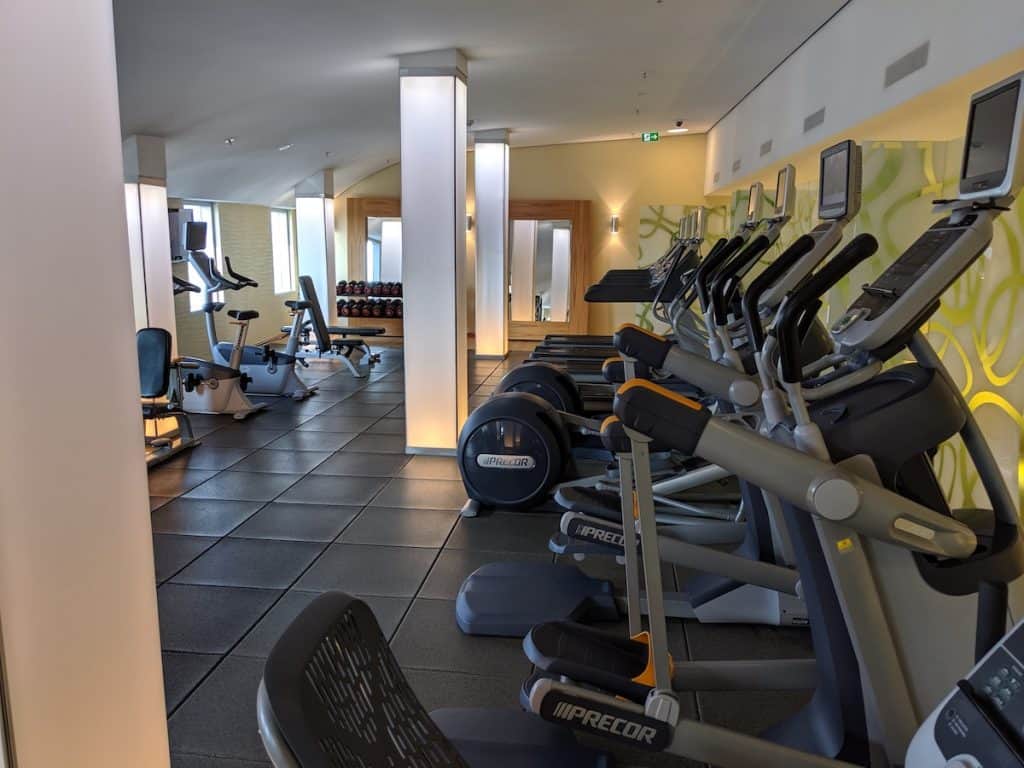 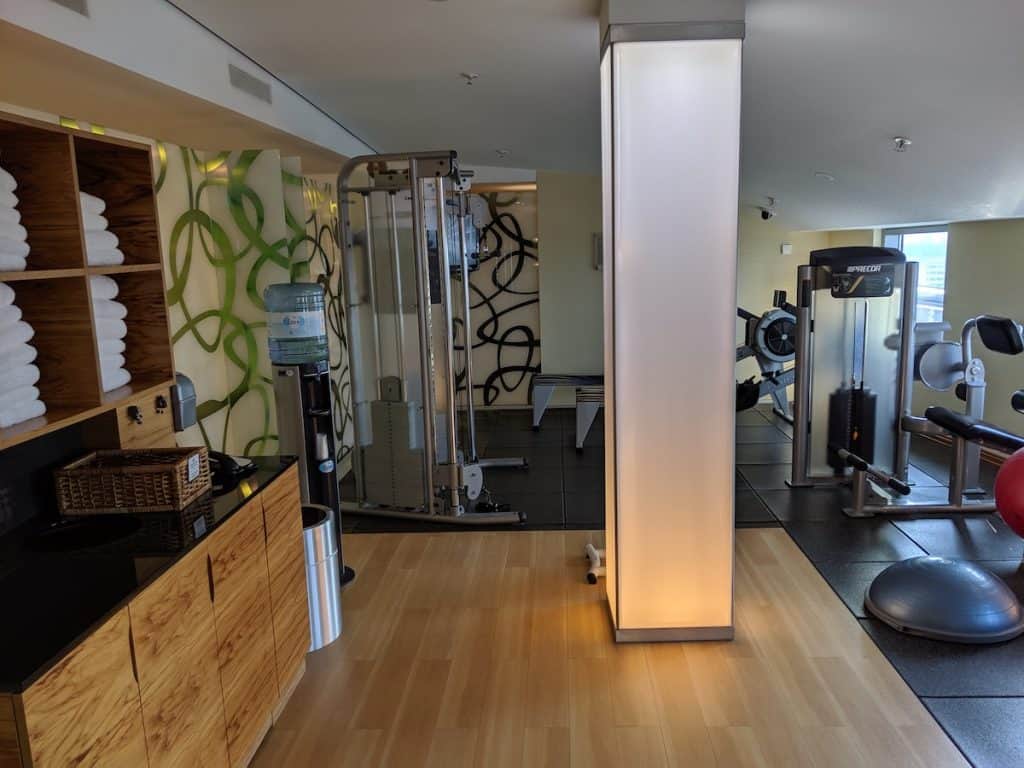 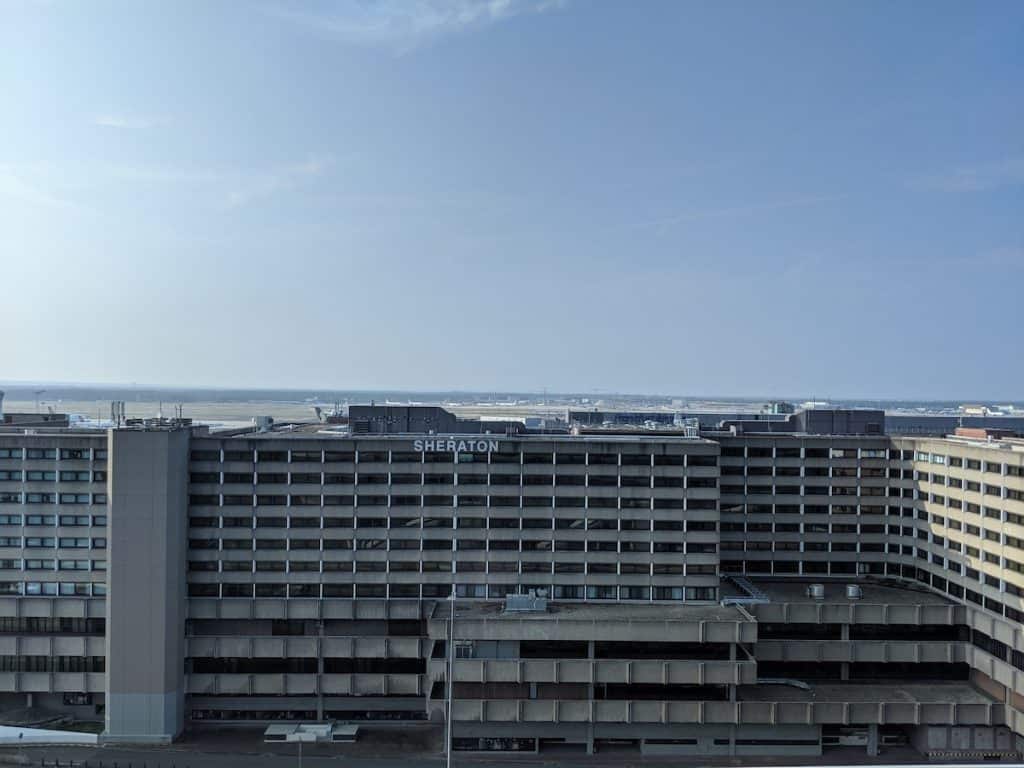 The Executive Lounge is located on the 10th floor.  As I arrived after it was closed and ate in the restaurant, I didn’t have an opportunity to check it out except through the window near the elevator. 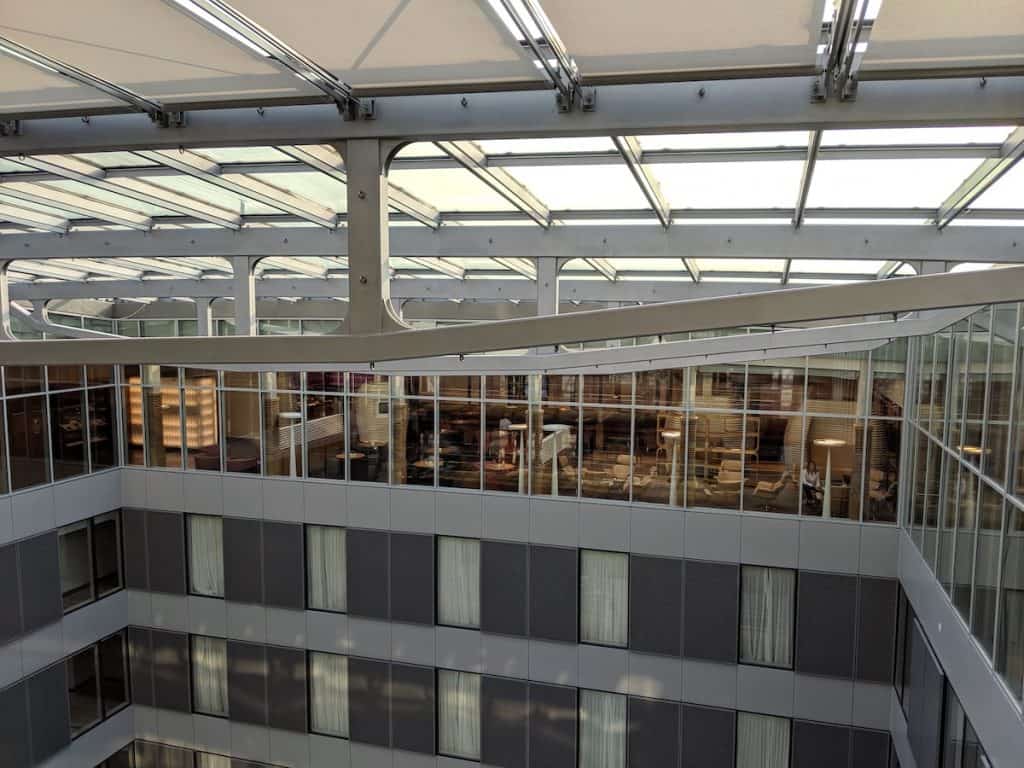 I chose to have breakfast in the restaurant on the ground floor as it has more options than in the club.  While the buffet didn’t have a ton of options (mostly just the basics), any hotel breakfast with strawberries wins me over.  It is easy to have a quick breakfast before a flight. 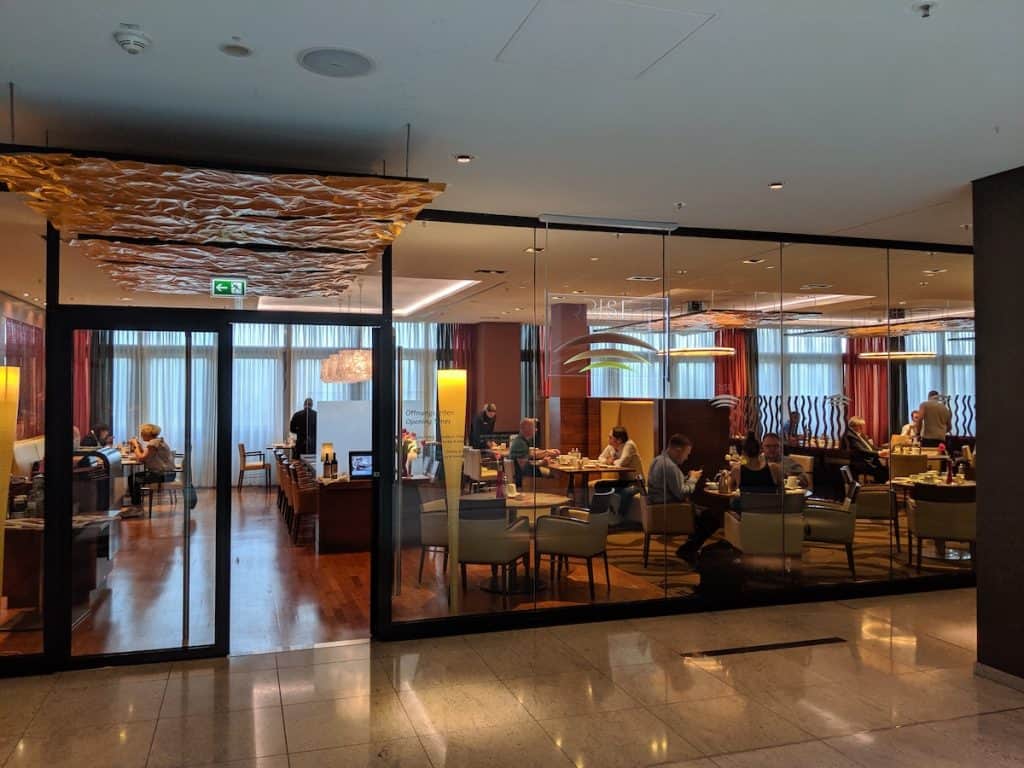 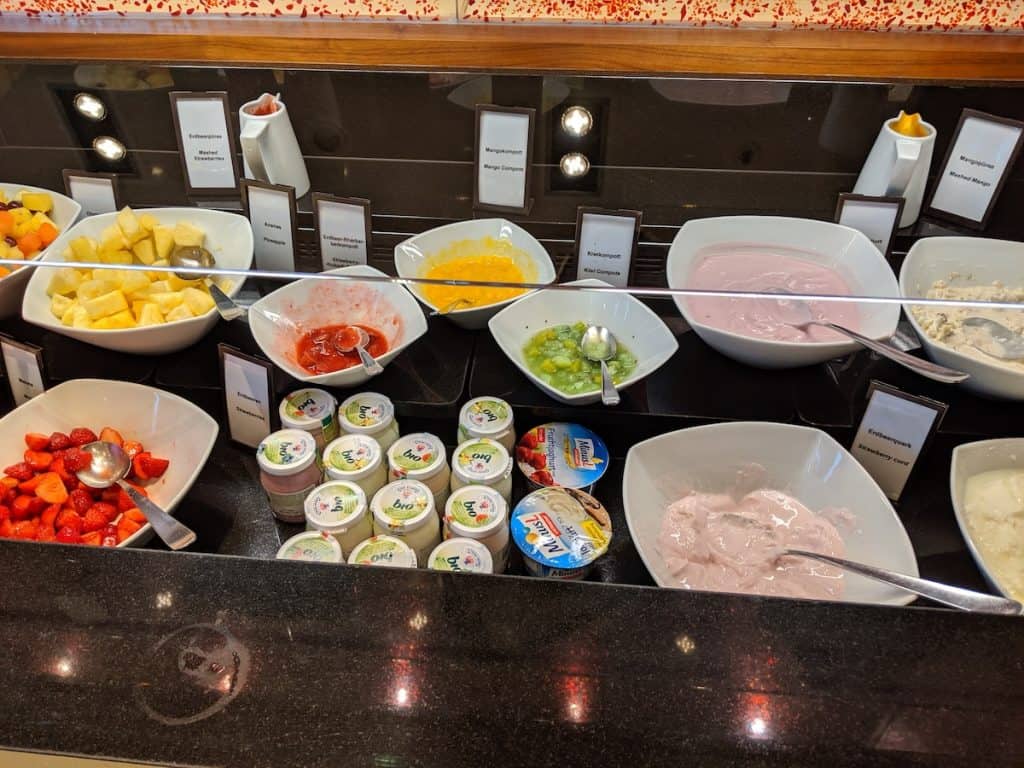 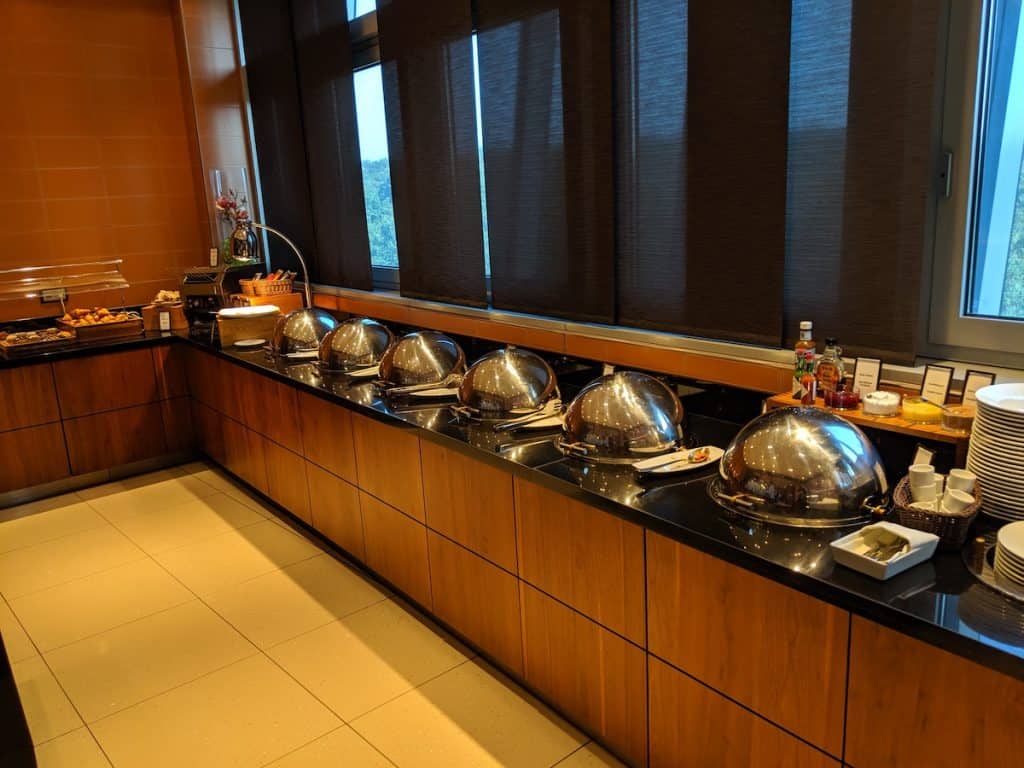 The hotel, while walkable from Terminal 1, is actually a bit of a distance from the airport.  I would probably pick the Hyatt Place or another option were I to come back via Terminal 2.  However, if you want easy access to the train to or from the airport, this would be a great spot.

The Hilton Frankfurt Airport is absolutely an airport business hotel.  I imagine families would prefer the Garden Inn next door.  Have you stayed at the property?  Did you have any problems navigating to it? 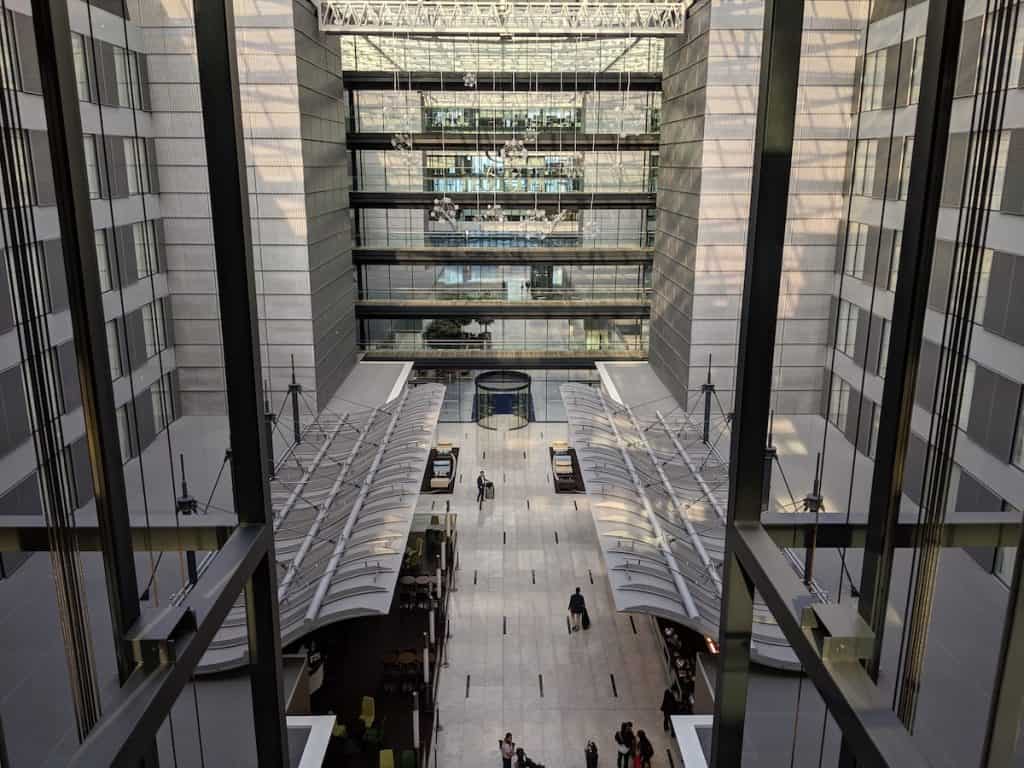 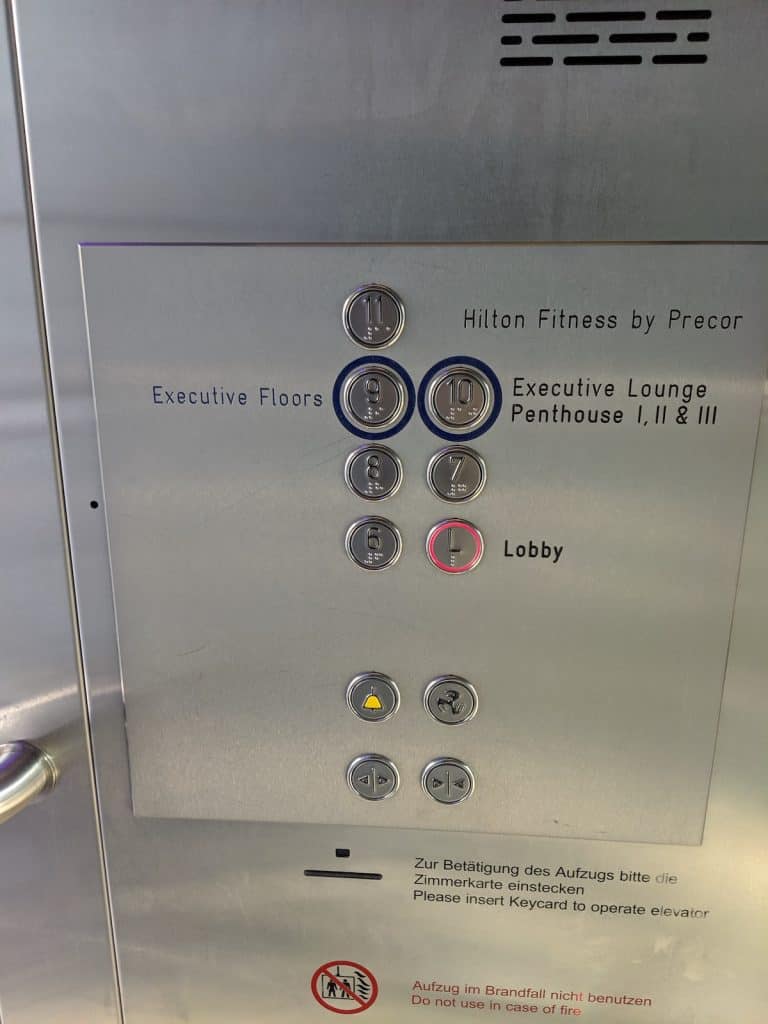