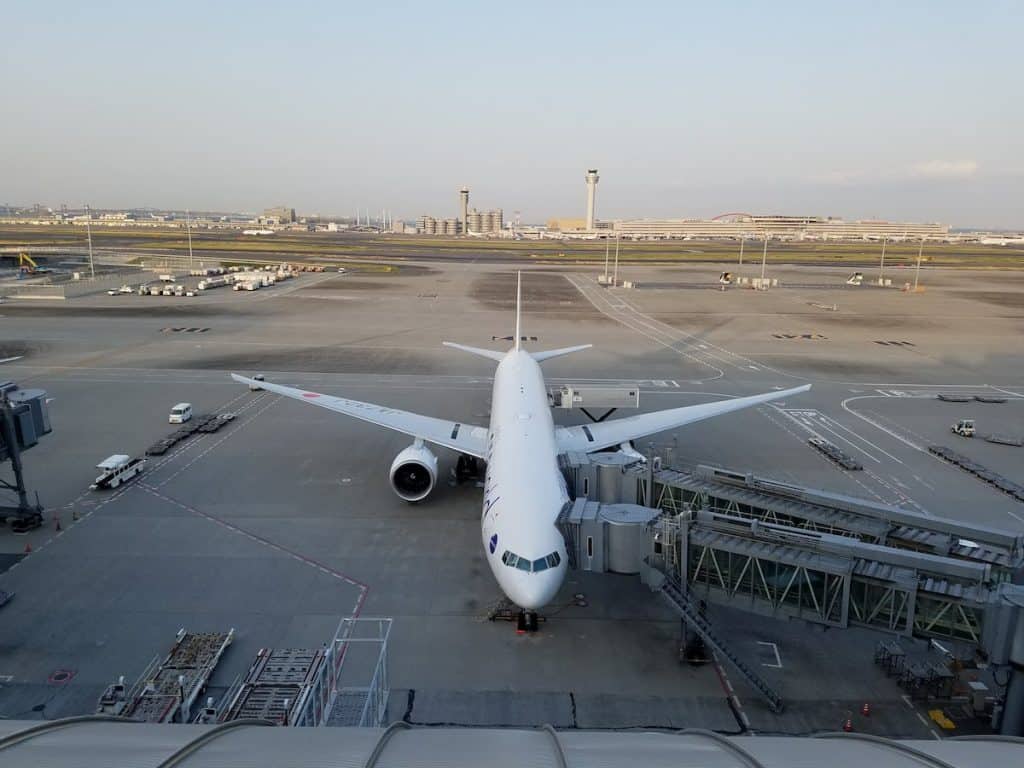 I’m not going to write a full review of the flight, as much of it was the same as my JAL First Class LAX-NRT flight just a week prior.  Instead I will highlight the differences in the flight.  Overall, I came away realizing the importance of the crew on passenger experience.

After visiting the Observation Deck and the Japan Airlines First Class Lounge, I made my way to the gate.  The flight was a few minutes delayed.  Our plane had the oneworld livery. 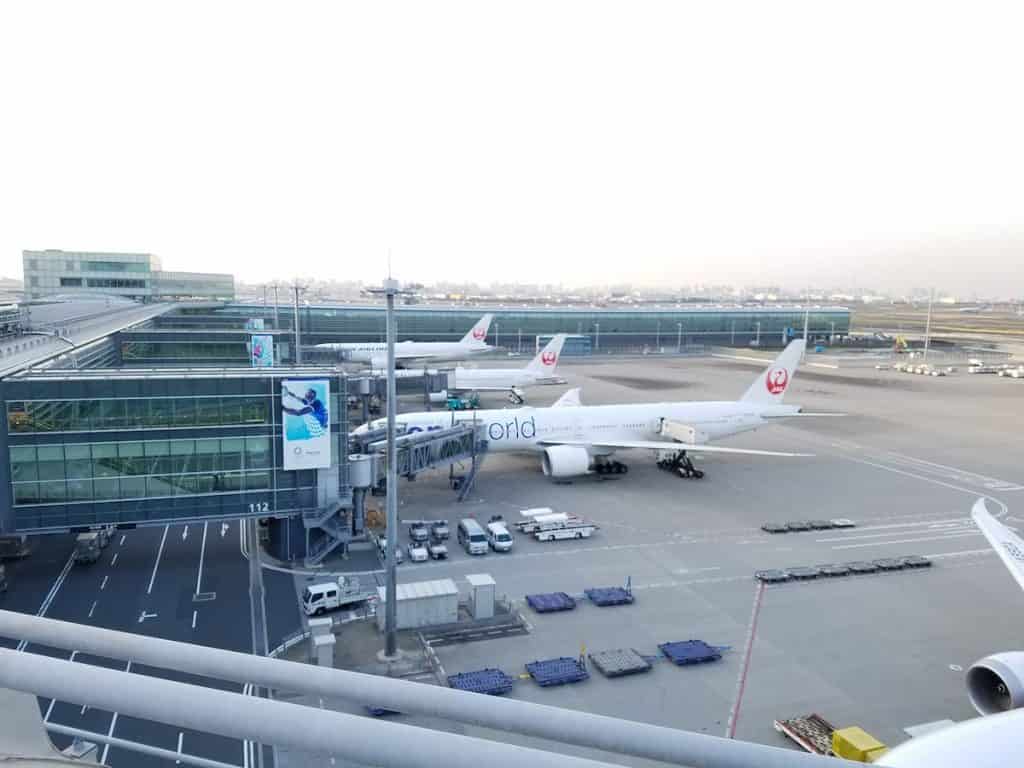 First they boarded a few VIPs.  Then First Class was invited to board. 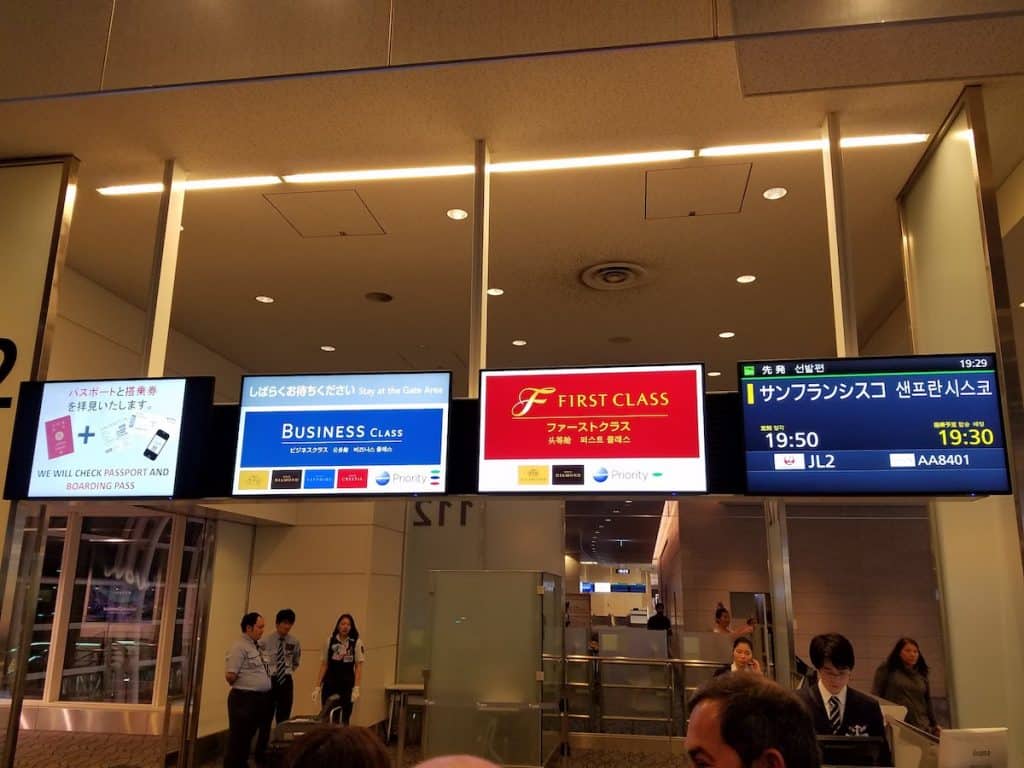 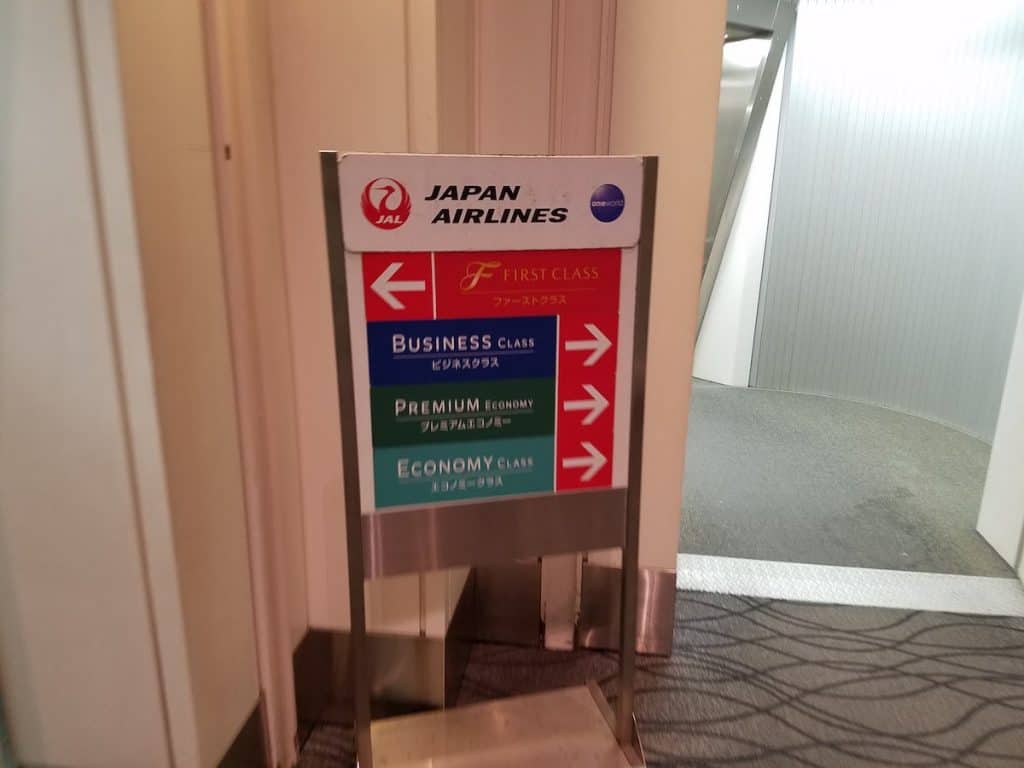 I was in the same seat as my previous flight, Seat 1K.  This time the First Class cabin was completely full.  This represented a 33% increase over my flight over.  This flight was 9 hours and 38 minutes long, 2 hours less than my flight over.  I think these two factors help explain why service this flight was not as good.

Shortly before take off, the same amenities were passed out.  Instead of a gray amenity kit, I was given a red Porsche Design kit with the same products inside.

I was offered pajamas but said I would wait until later in the flight to get them.  I was never offered them again.  I am sure I could have asked, but honestly I was fine in the clothes I was wearing.

The menus were brought around. 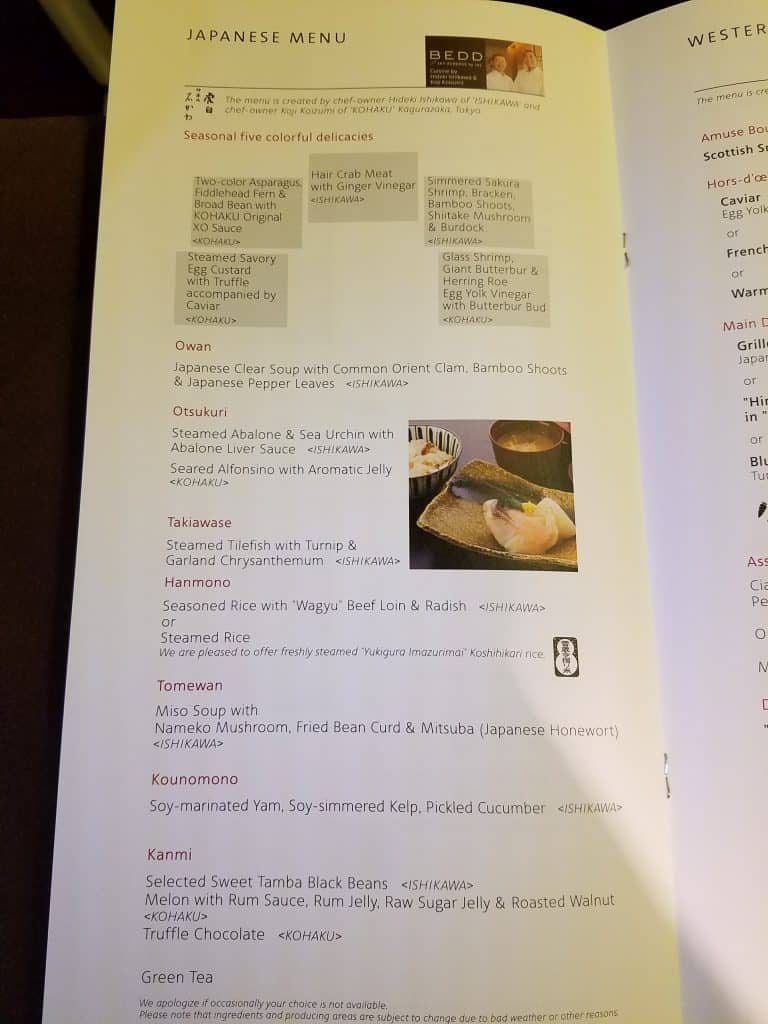 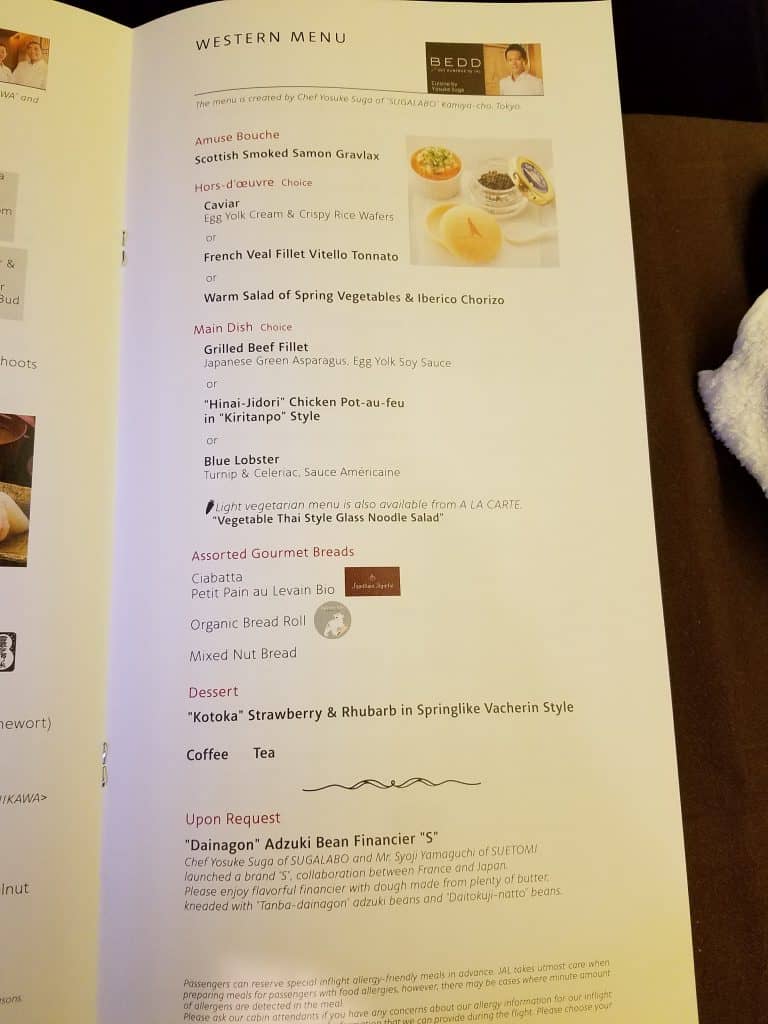 This time I went with the western menu.

While you might think the amuse bouche would be first, you were wrong.  There was a pre-amuse bouche appetizer.  It was brought with a glass of Cristal. 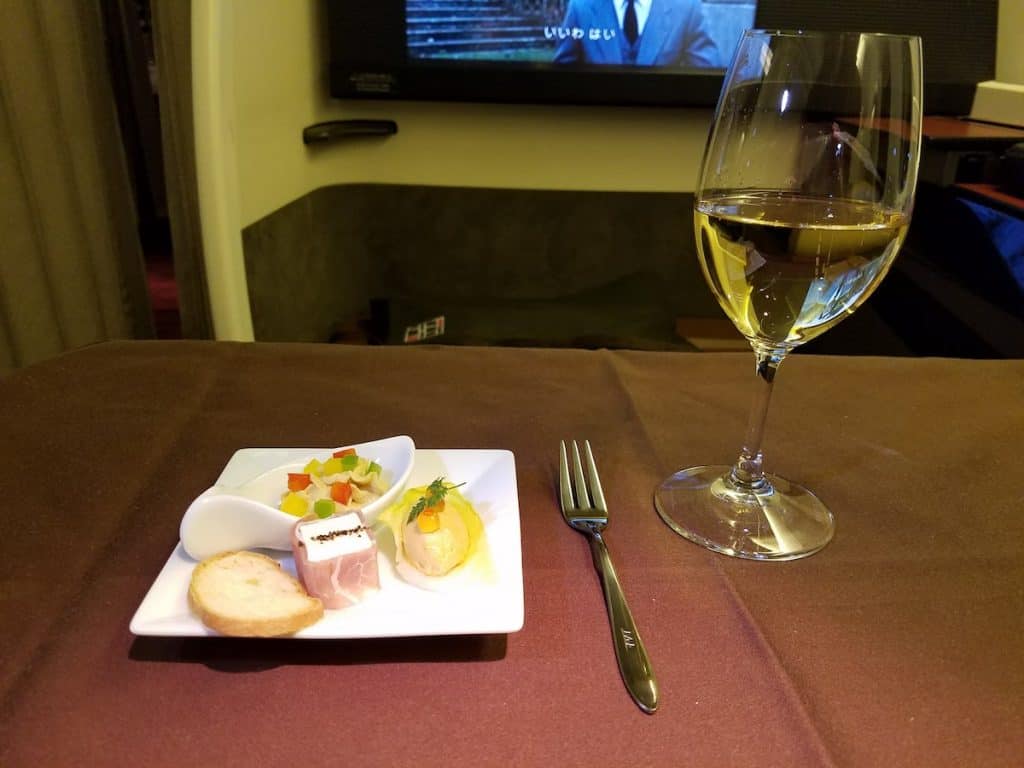 Then came some bread with various spreads. 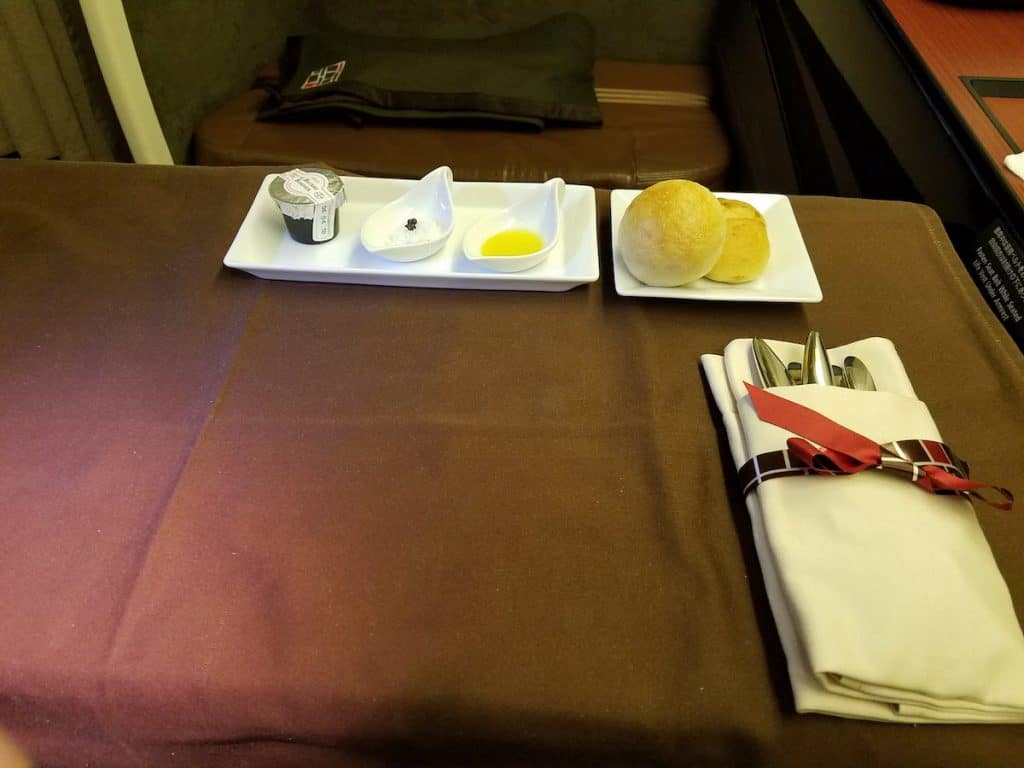 I was rather impressed by the amount of silverware. 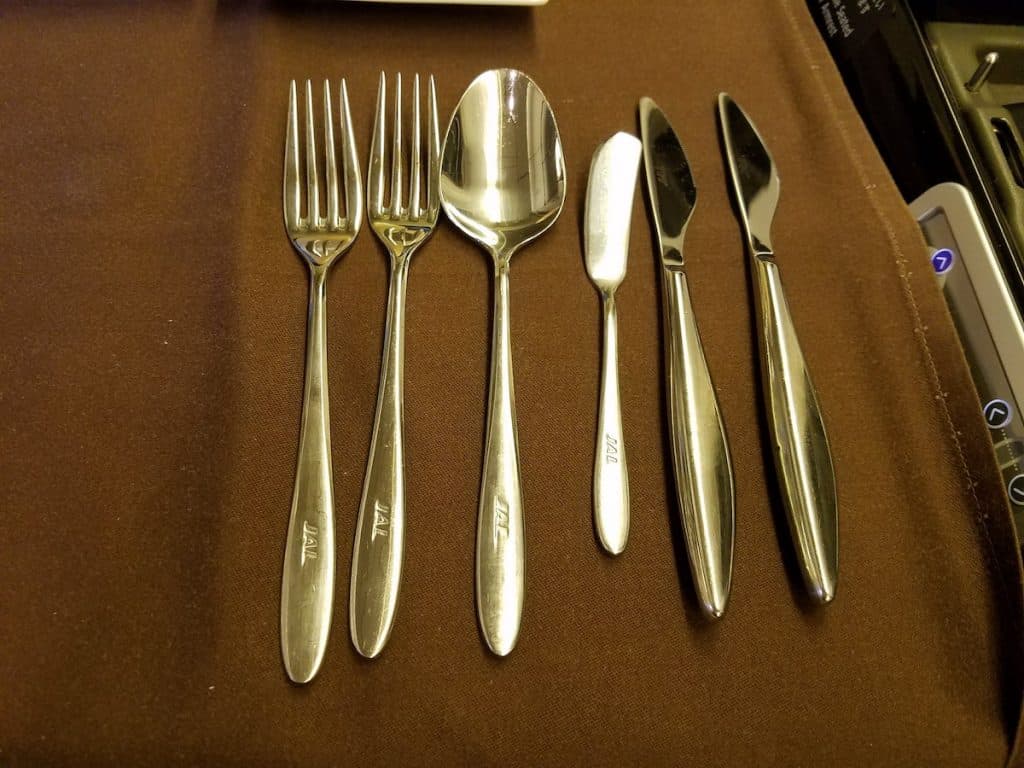 The amuse bouche was next; a surprising large piece of salmon. 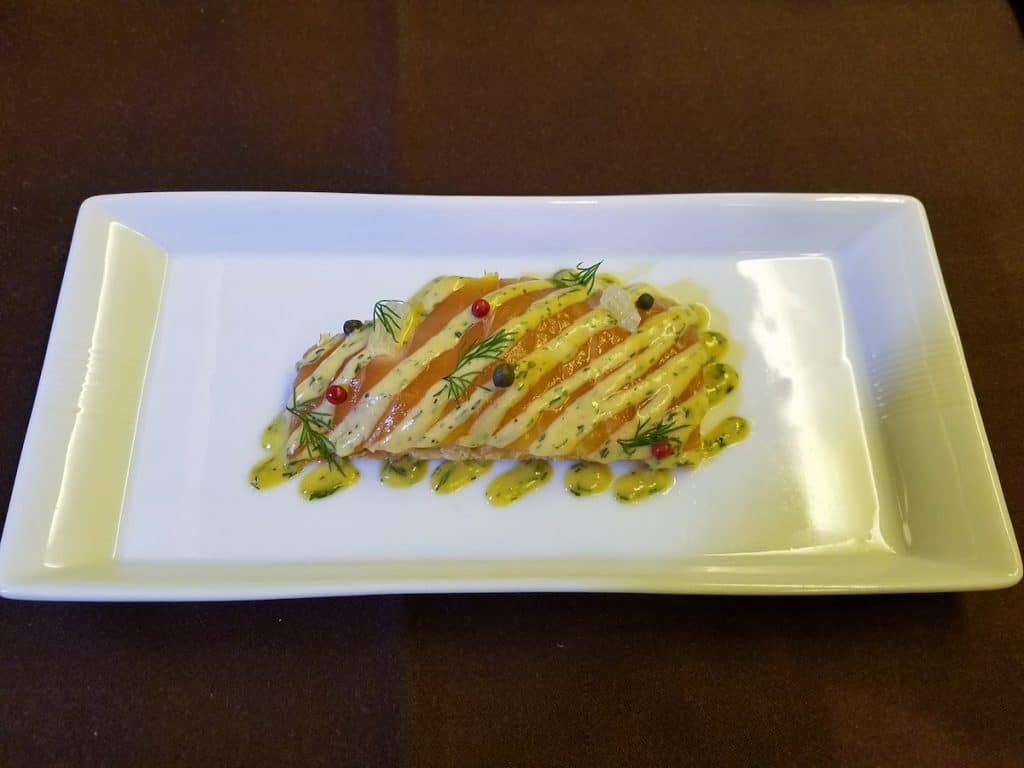 I went with the caviar as my next course.  It came with a tasty spread and some wafers. 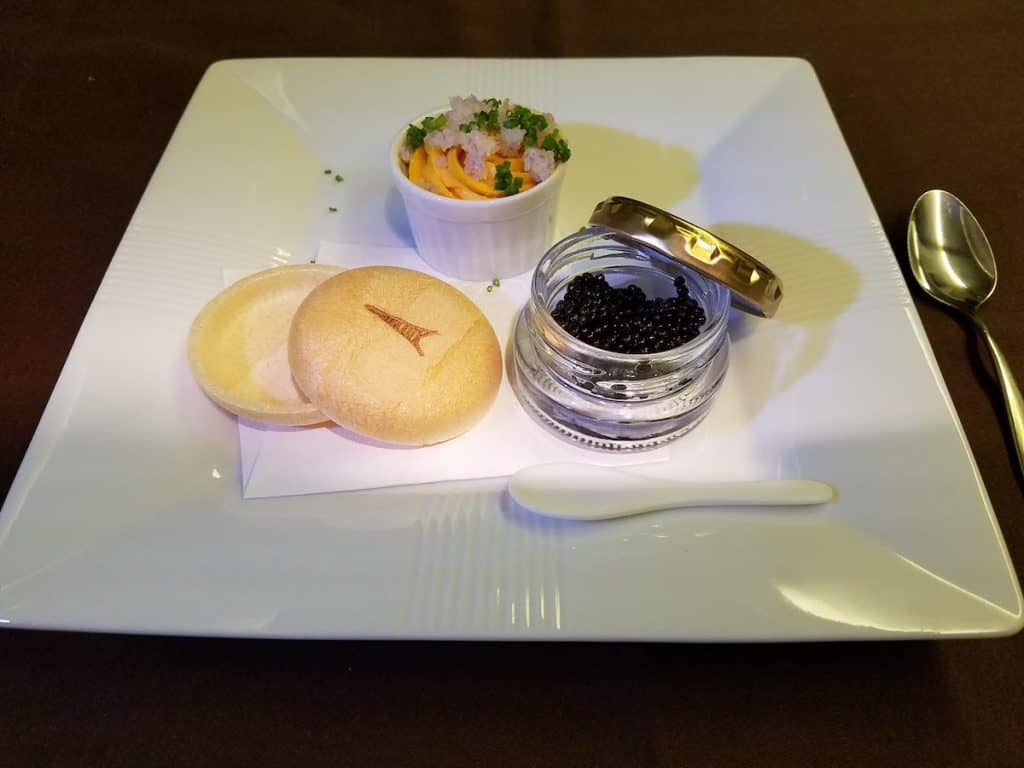 For my main course I went with the lobster.  I thought the lobster on Singapore Airlines was tastier but this was still very good. 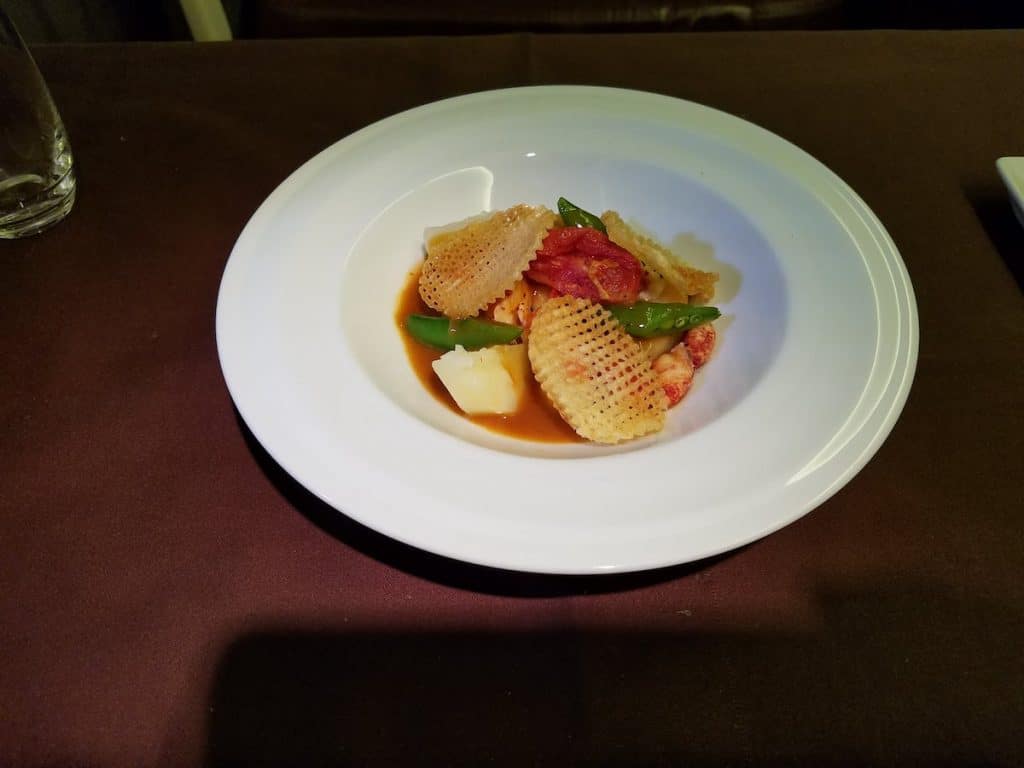 The dessert was a strawberry rhubarb with rich cream.  It was beautiful (notice the flower petals) and just as delicious. 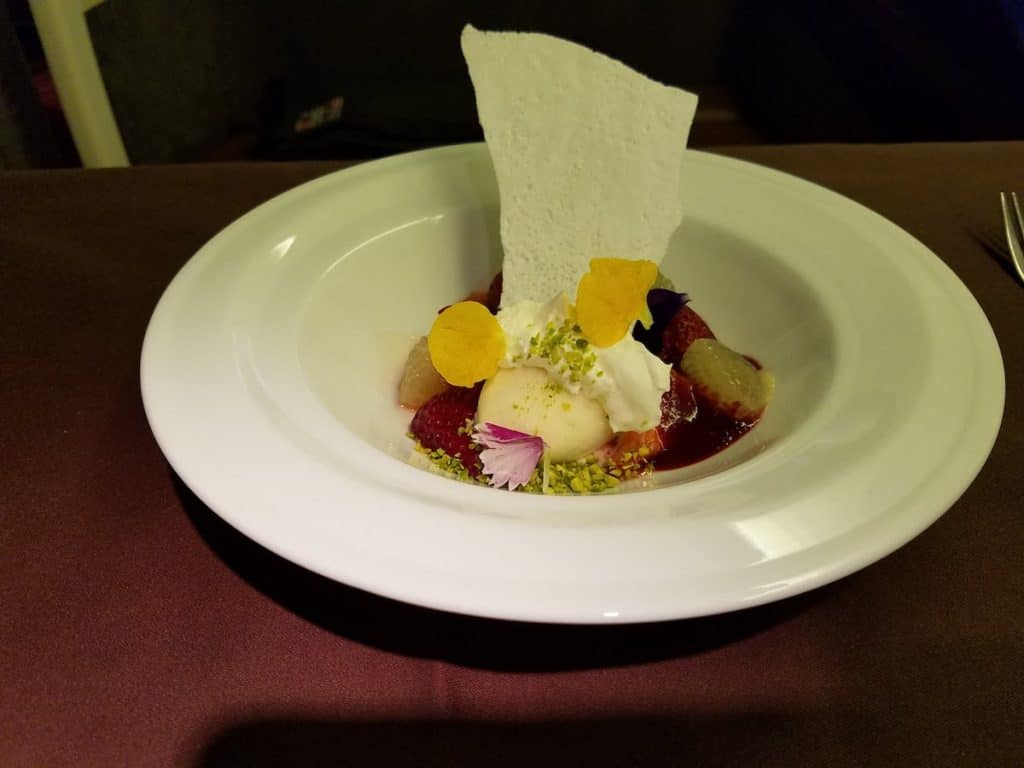 After dinner I went to the lavatory to brush my teeth, but there were no toothbrushes available.  I asked a flight attendant and she got me one and put some more out for the other passengers.

When I got back, my bed had been made up. 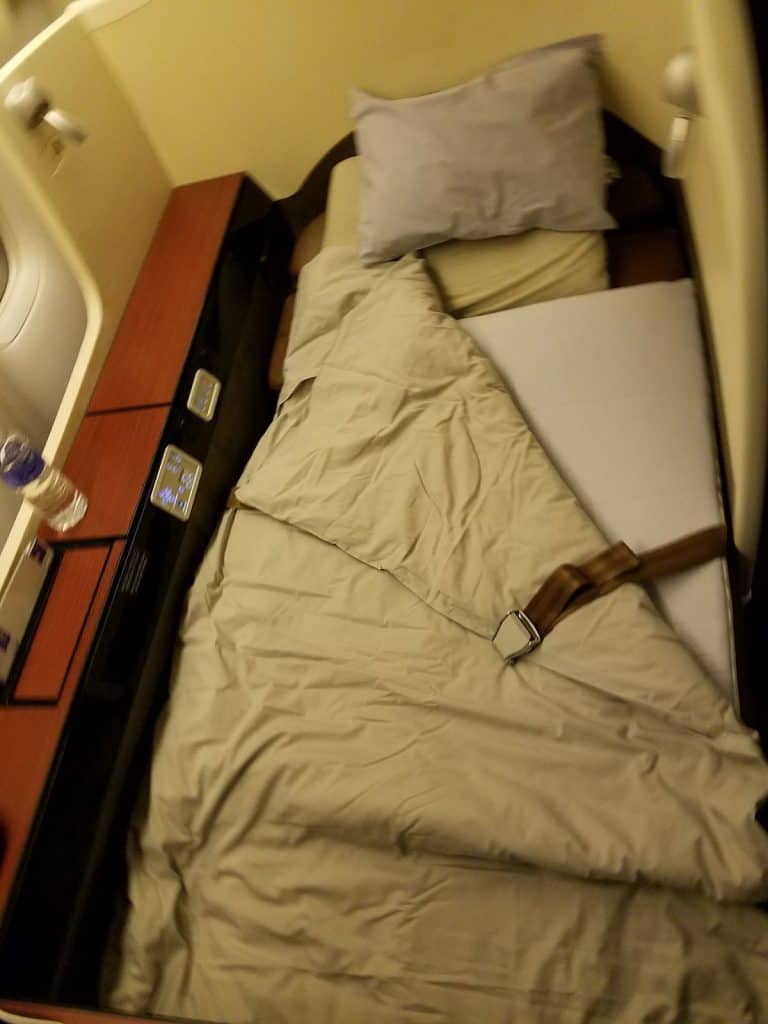 I was able to sleep for a few hours and woke up incredibly groggy.  I inclined my seat a bit to watch a movie.  Shortly thereafter, the lead flight attendant came over and asked if she could remove my bedding.  Before I could get up, she started pulling the mattress out from under me.  I was able to awkwardly lift myself up so she could slide it out from under me.  It was odd, perhaps she was avoiding asking me to stand up, but it would have required a lot less acrobatics.

I also noticed that the crew was out in the cabin a lot more, opening and closing over head bins, than on my previous flight.  They never drew the curtain in front of the galley either.  It just seemed like the crew was not as focused on ensuring a luxury experience for the passengers as my LAX-NRT crew had been.  They did have 2 hours less to complete their service for a full 8 person cabin, so I am sure it is a more stressful flight.

I did order some food before landing.  I had some fruit and ramen that were brought out together. 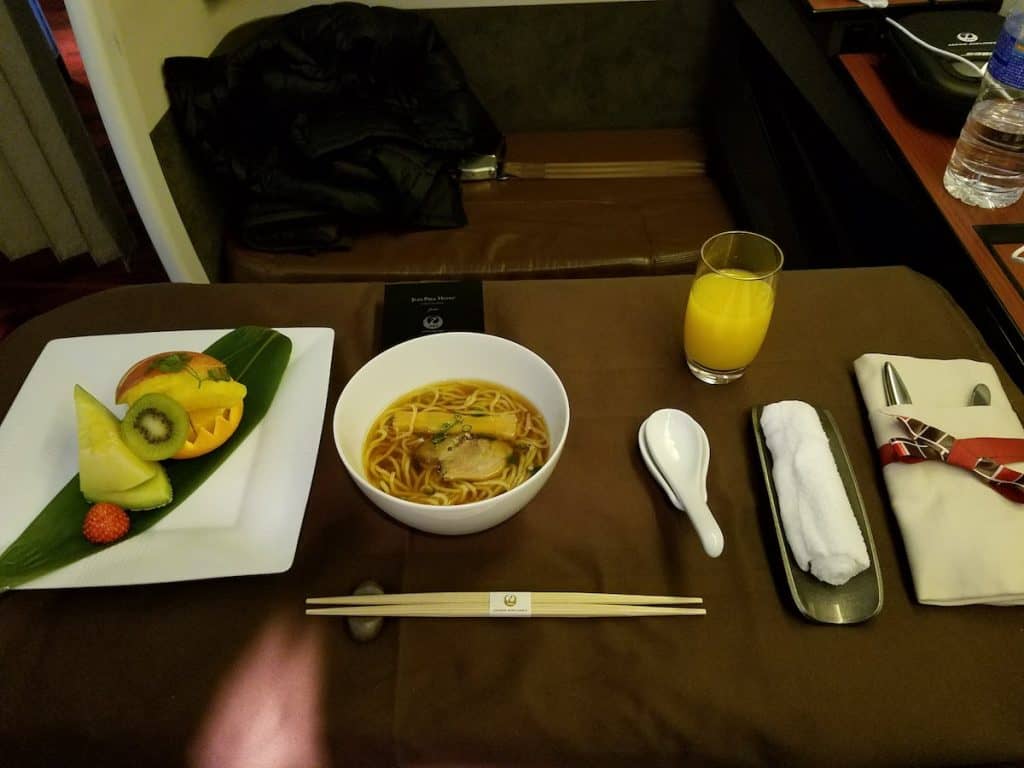 In addition, a chocolate was delivered (something my previous flight did not have). 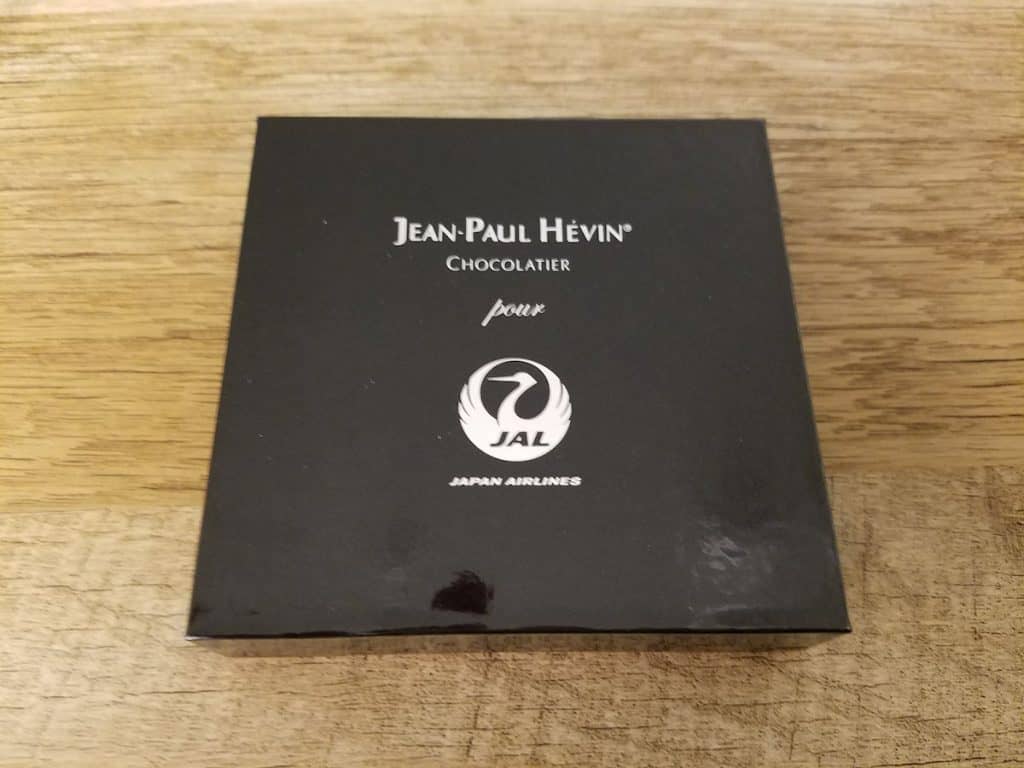 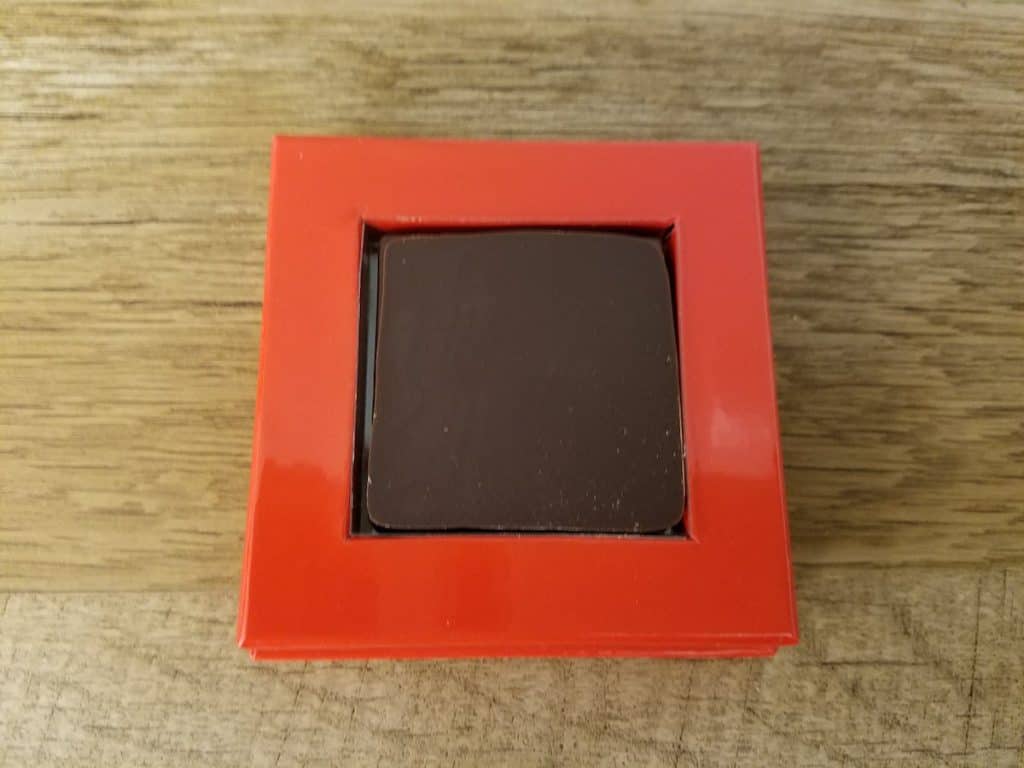 While the food and hard product was as good as my first flight, the service was a step down.  Besides the mattress issue, the service was not bad, it just was not nearly as focused on detail as my previous flight had been.