Internet company subscriptions are becoming quite the rage.  Think of them as CD clubs of the internet age.  Each month, the company sends you a “curated” box to your home and charges you for it.  Depending on the company, this may be high end fashion, food, make up, pet toys… you imagine it, it probably is out there.

Typically these companies offer an introductory offer (that can sometimes be combined with an Amex Offer!) that makes the first month relatively cheap.  The idea is that the company hopes you’ll love it so much you’ll continue to subscribe.  My guess is that these companies make money by featuring different brands to consumers that offer the company a steep discount on the items.

I saw an ad for something called Sprezza Box that offers fashion accessories for men each month for $28.  They value the box at “over $100”, though I think that is being generous… Think socks, tie, handkerchief.  I don’t think I would spend $100 for that.

The thing that caught my attention was their Delta Airlines Sprezza Box.  When using the promo code “BONUSBOX”, with your first order you also received a second box, the Delta box, for free.  So instead of $28 for one box, you paid $28 for two and got some fun Delta related items.

So I signed up using a prepaid Mastercard (in case it was difficult to cancel the subscription).  2 weeks later the boxes arrived in the mail. 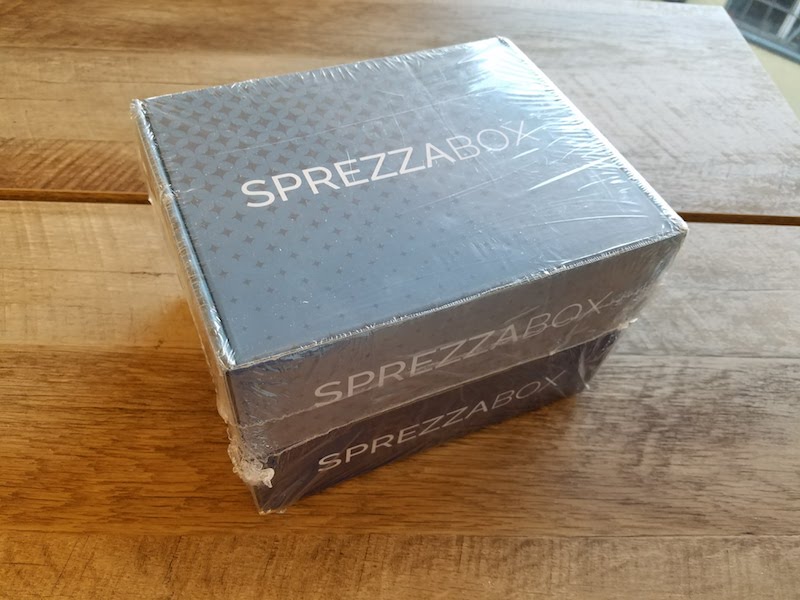 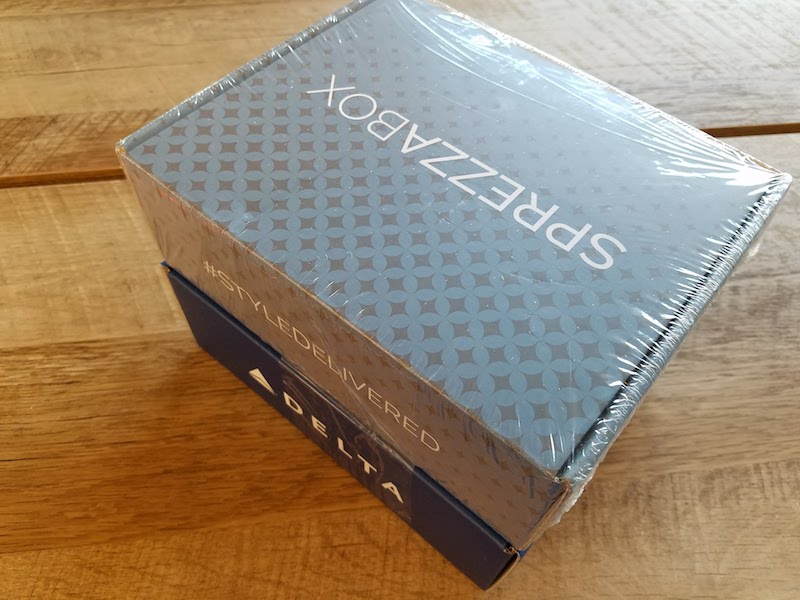 The standard box was the Manhattan Box (I think the March 2018 box). 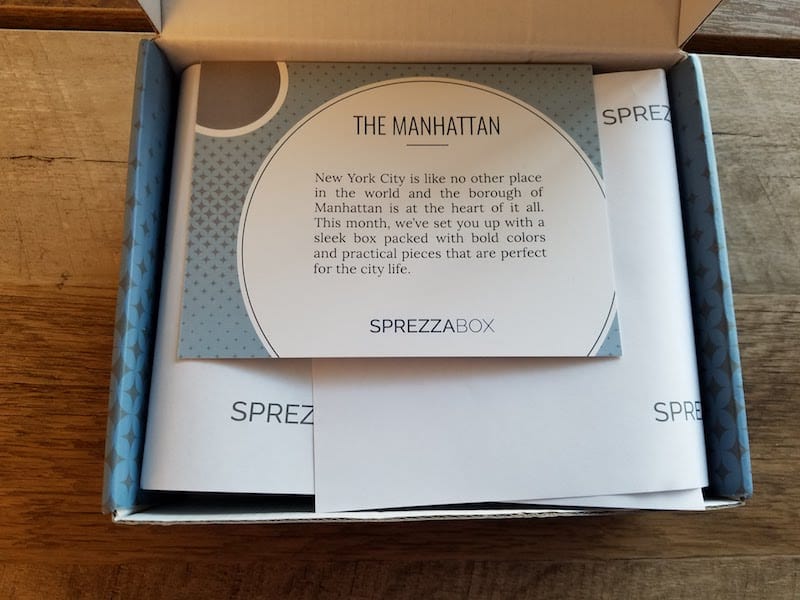 Inside was a card that listed the contents and their “value”. 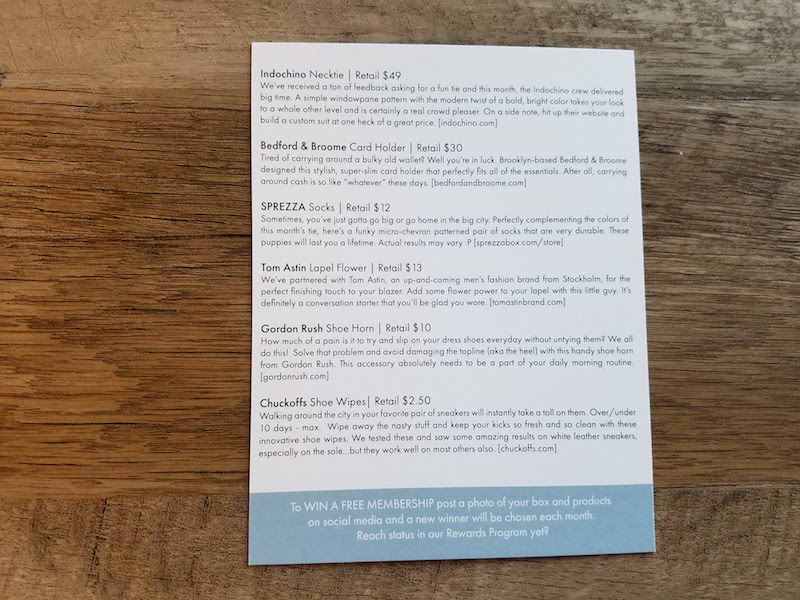 The only things to me that had any value were the socks, tie, and small wallet. 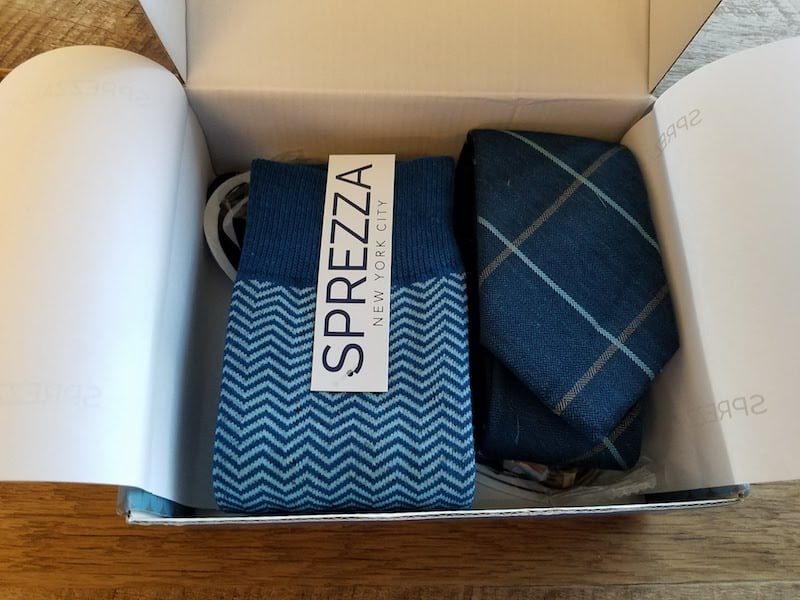 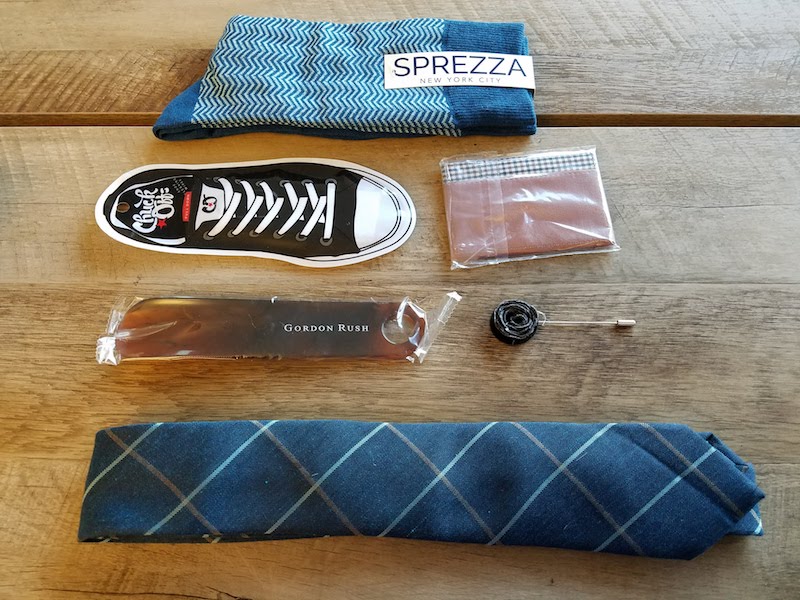 Overall not something I would value for myself at $28 but I also rarely wear ties. 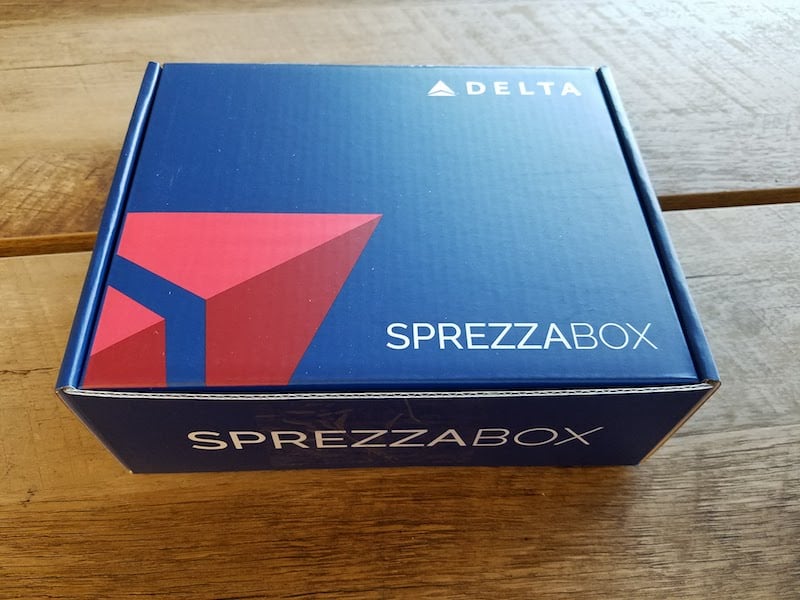 Upon opening the box, there was a similar card enclosed. 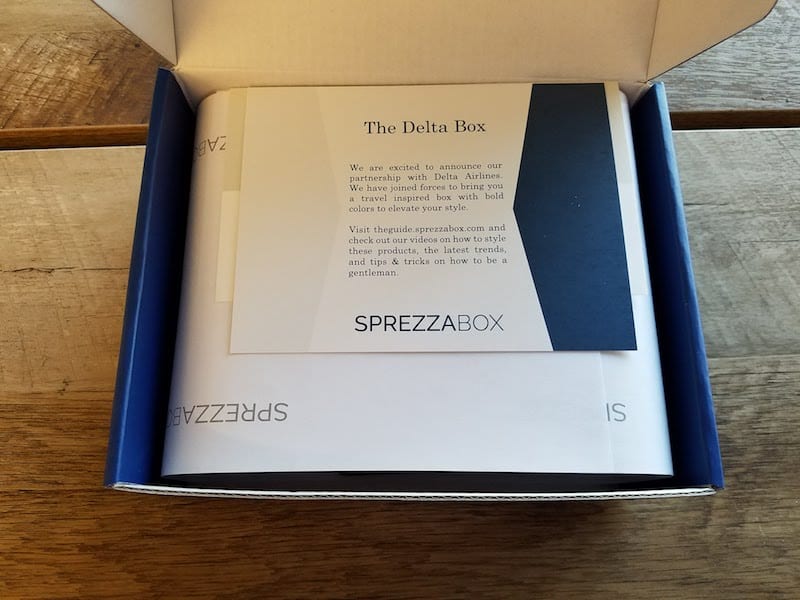 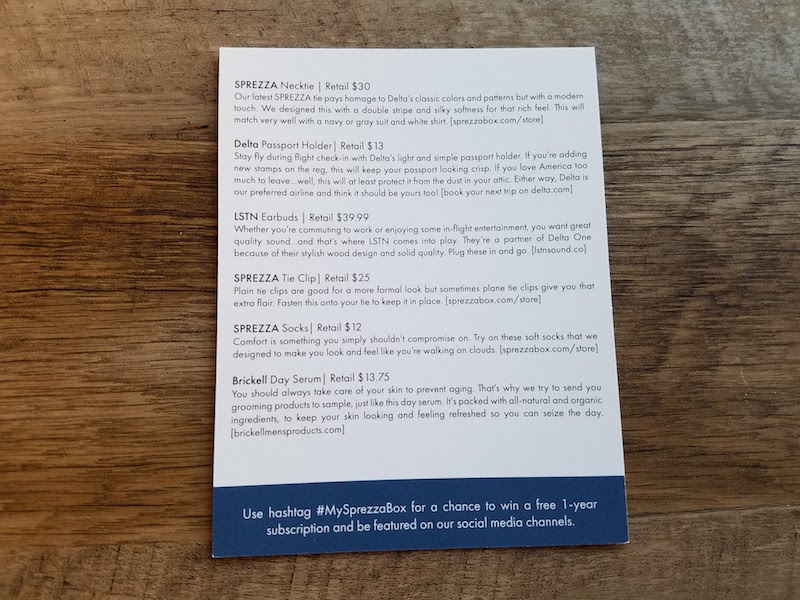 I actually found all of the contents in this box to be somewhat useful to me (again, not $100 but I will probably use most of the items at some point). 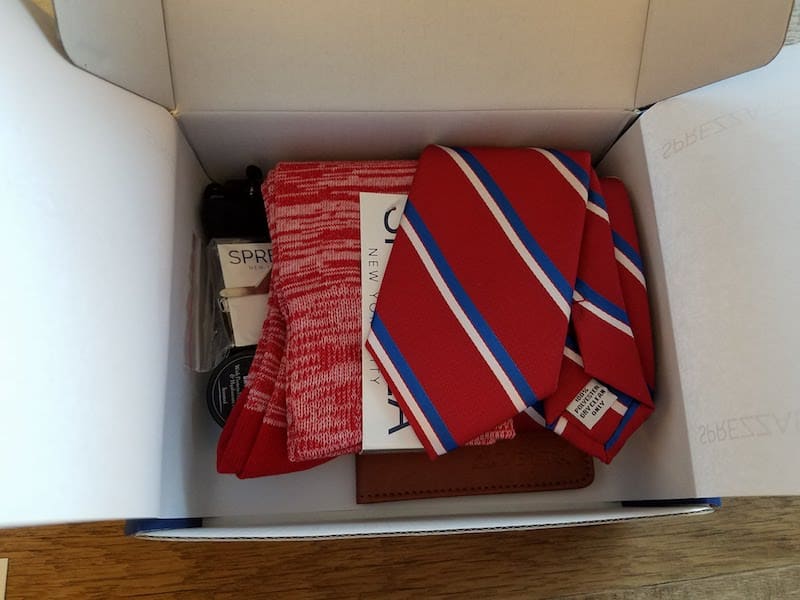 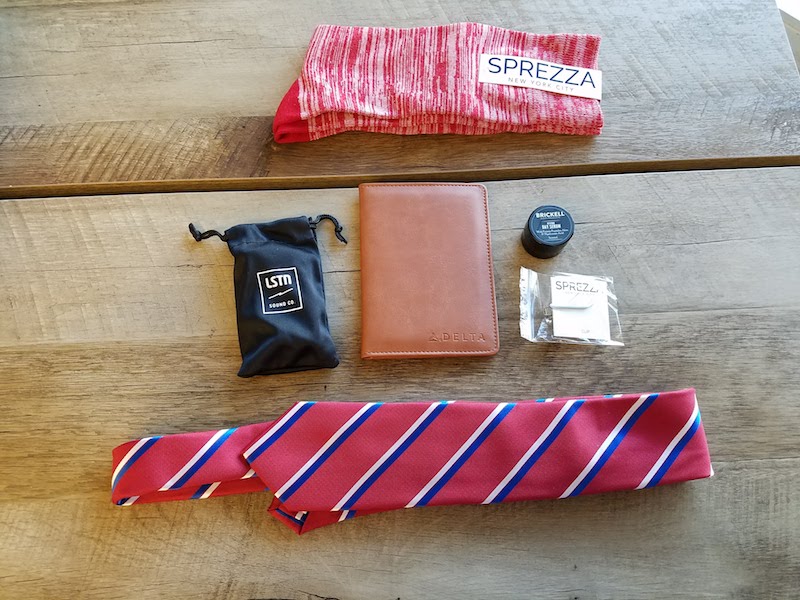 The Delta passport holder is classy. 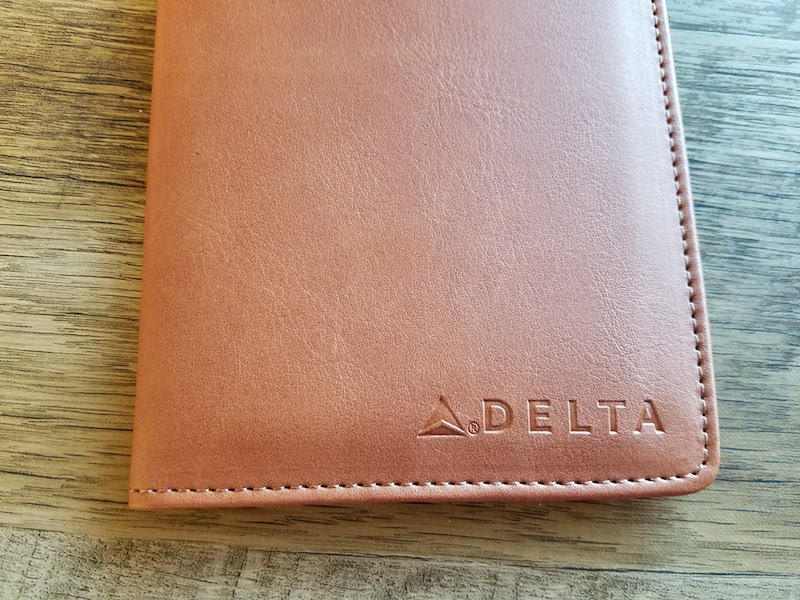 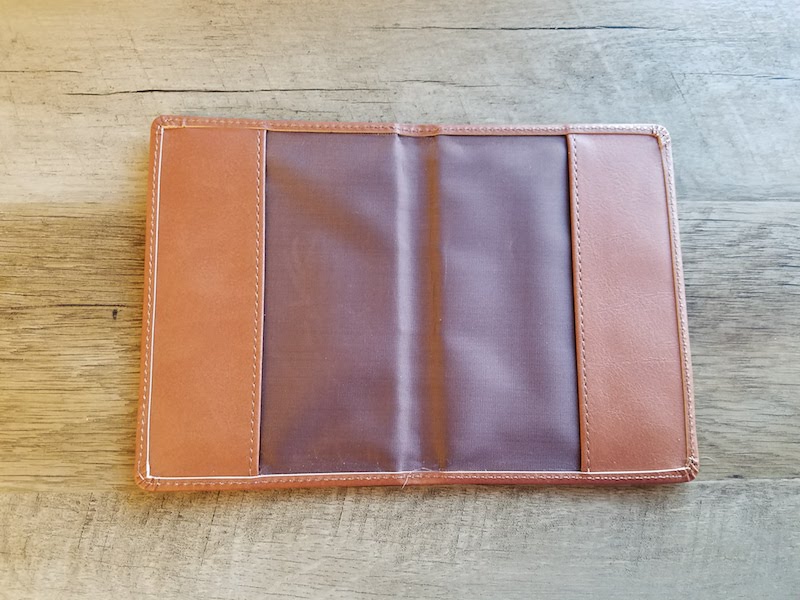 I also really like the airplane tie clip.  I don’t own a tie clip and actually have been thinking of getting one.  This one is perfect for me. 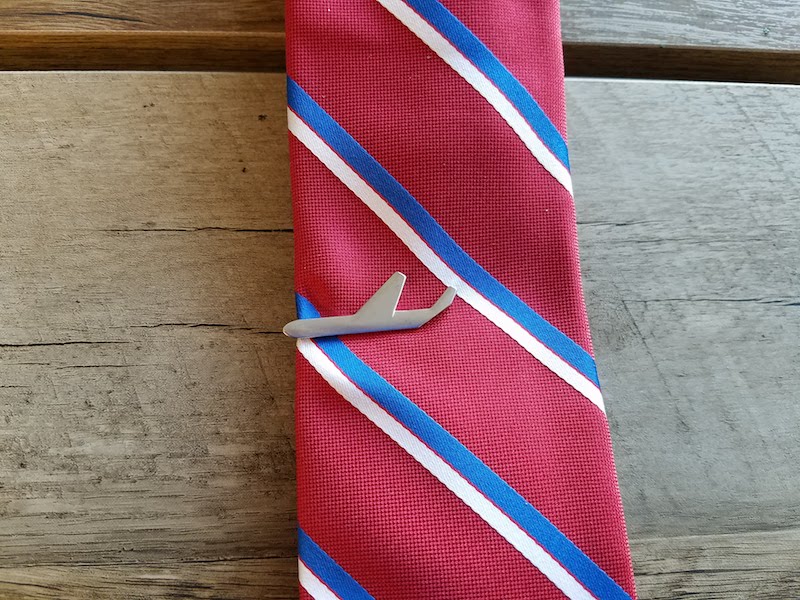 The headphones are from LSTN Sound Co, and are made of wood.  Delta uses the more premium version in their premium cabins. 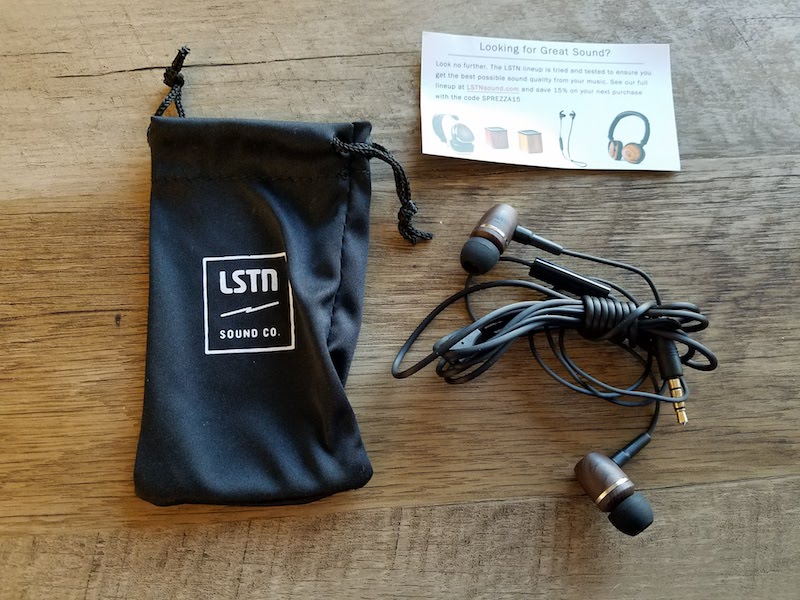 Overall I found much more value in the Delta box than in the standard box.  I will be canceling my subscription but for $28 it was a fun experiment and got some fun things.  It reminds me of a First Class amenity kit sent to your home.

Note: I have no relationship with SprezzaBox or Delta.  I paid the standard price for the boxes and receive no compensation if you end up buying one as well.  So buy it.  Don’t.  I don’t care.