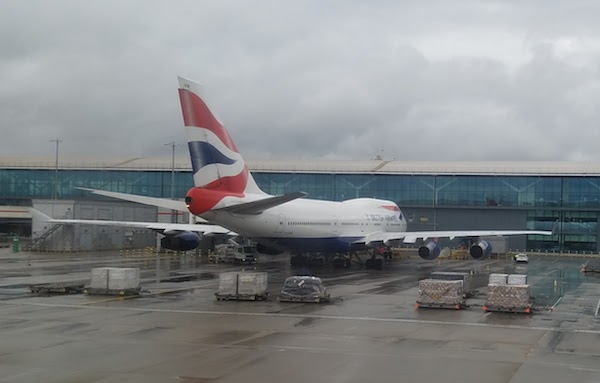 Back in February I booked a flight from Seattle to Amsterdam for under $300.  When I arrived at Seatac Airport for my flight, I decided to ask about potential upgrades.  The agent offered me an upgrade to World Traveller Plus for $349 or Club World (Business) for $949.  I have flown Club World and knew it wasn’t worth $949 in upgrade costs.  $349 seemed like a lot for more leg room so I turned it down and headed to security.

However, I wondered if the ticket class would change for mileage earning purposes.  I went back and asked.  Two different agents explained that the ticket would be rebooked in W class and would earn miles based on W.  Originally I was booked in O class which earns 25% EQM when credited towards Alaska Airlines Mileage Plan.  A ticket in W class would earn me 150% EQM.  Being on the cusp of reaching MVP Gold 75K for this year, I decided it was worth the upgrade cost and booked the ticket.  Icing on the cake was that a window seat in the bulkhead row was available.

World Traveller Plus tickets do not come with lounge access.  Which isn’t a big deal considering the British Terraces Lounge in Seattle is subpar.  When it came time to board, to my surprise, Alaska Airlines MVP Gold were called prior to World Traveller Plus passengers.  So I was able to board earlier due to my Alaska status than due to my “premium” cabin ticket.

Both the lack of lounge access and lack of real priority boarding begin to show where World Traveller Plus fits in to the pecking order of passengers.

The plane was ancient (in plane terms).  It was delivered in June 1997 making it over 20 years old.  I understand that some of the BA 747s have been refurbished recently but this was not one of those planes (at least not the economy cabins).  If you look up “World Traveller Plus” on BA’s website, the photos shown look nothing like the cabin I was in. 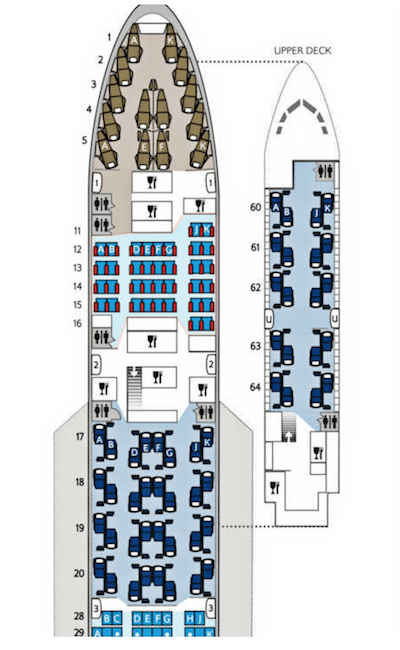 I was seated in 12A, a window seat in the first row bulkhead.  Typically I prefer aisle seats but being in a bulkhead meant I could get out without disturbing my neighbor. 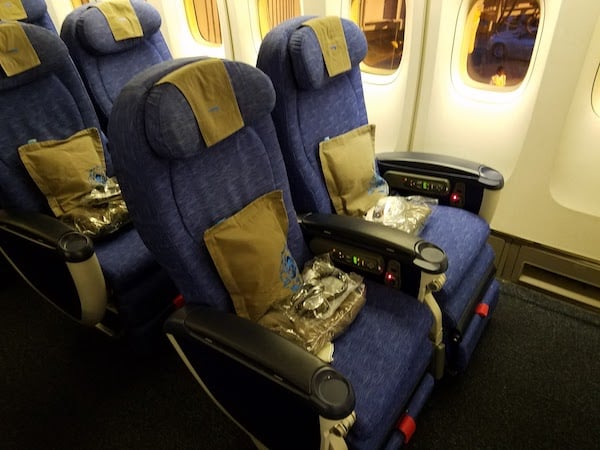 Still, they are more roomy than general Economy class seats both in terms of legroom and width.

Besides an adjustable headrest, the seats also have a fold out footrest and are able to recline.  There is a third button that I think was supposed to control lumbar support but I couldn’t get mine to work. 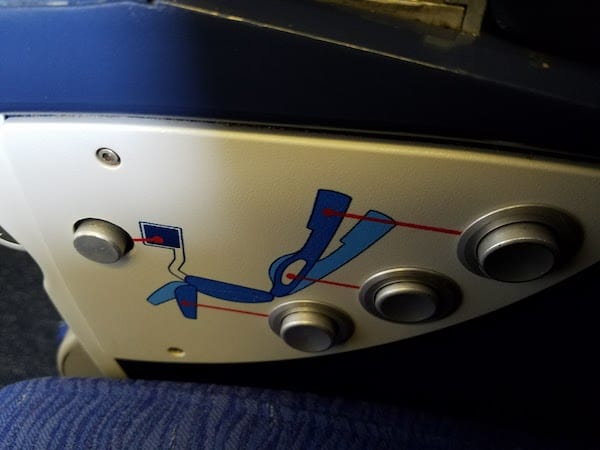 As I was in the bulkhead, the in-flight entertainment screen folded up from the armrest.  The quality and size were terrible.  But I suppose that is late 1990s technology at work.  The quality was much worse than my phone and the size was only slight larger.  The choices of movies was also very limited.  The advertisement said over 100 movies and TV shows; I would say that was probably about 45 movies and 55 tv episodes.  Not great variety.  Typically I watch 2 movies on a transatlantic flight, but I didn’t watch a single movie or TV show on this flight. 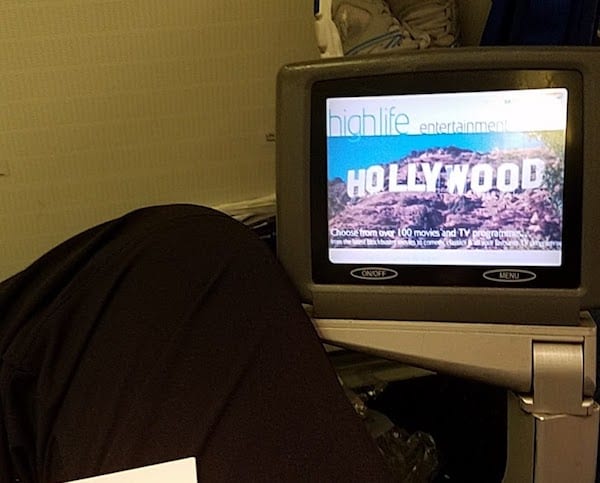 One the left armrest was the in-flight entertainment remote and headphone jack. 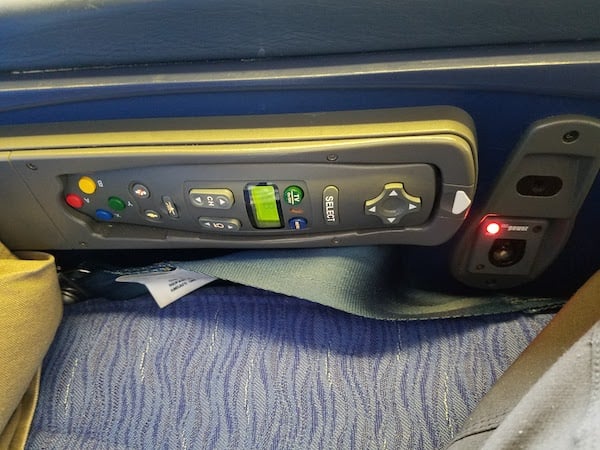 The red light you see is next to the “EMPOWER” port.  It is a 15 volt DC outlet that requires a converter that was not available.  So no power.  But hey, that bright red light is nice right? 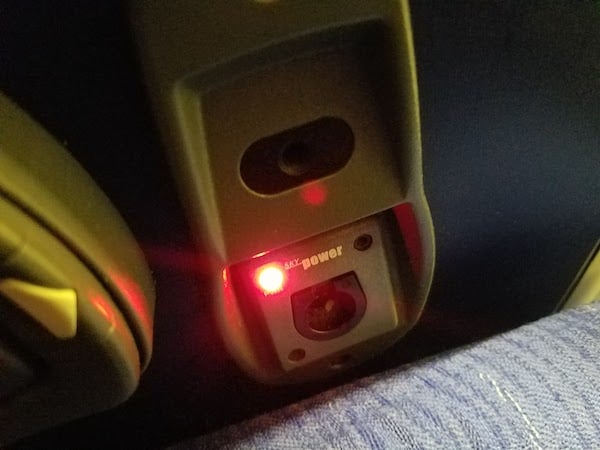 The leg room in the bulk head seat was okay.  Definitely not impressive but enough to not feel like my knees were going to bump the wall.  I’m 6’2 so you can see there is a good amount of space. 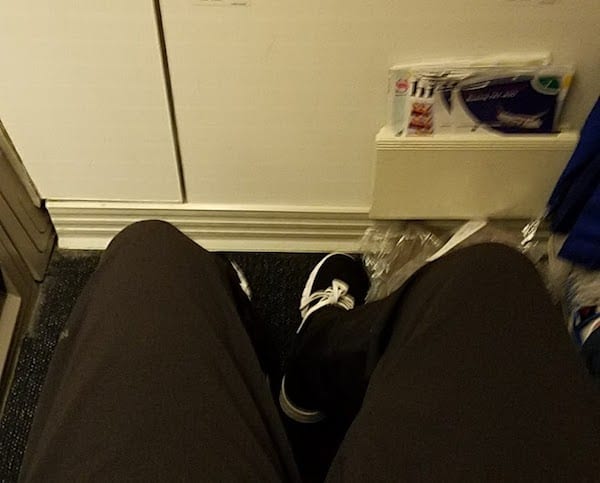 On the seat were a few items.  A blanket and pillow. 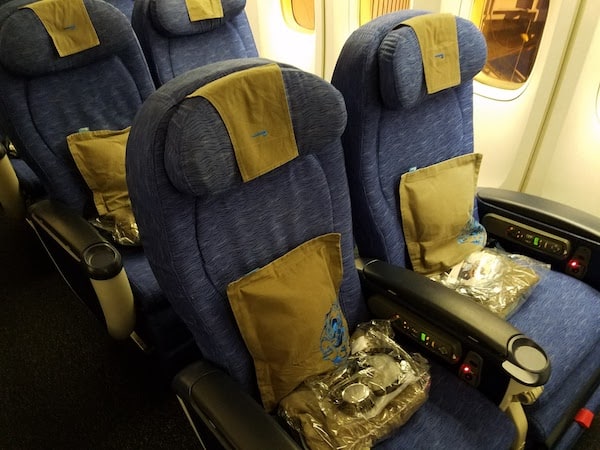 A pair of headphones.  And an amenity kit. 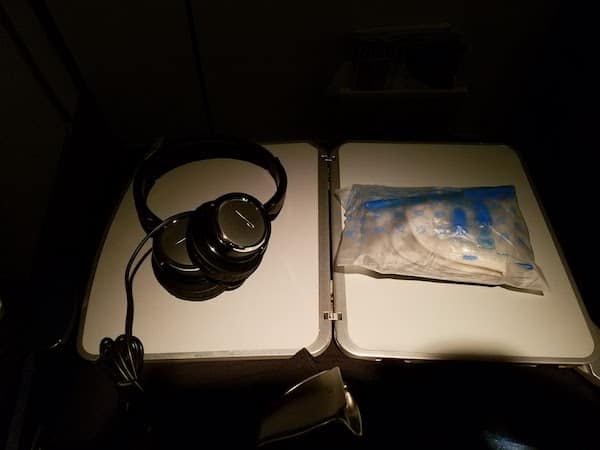 The amenity kit was a non-reusable plastic bag.  Inside was a pair of socks, eye shade, toothbrush and toothpaste, pen and ear plugs. 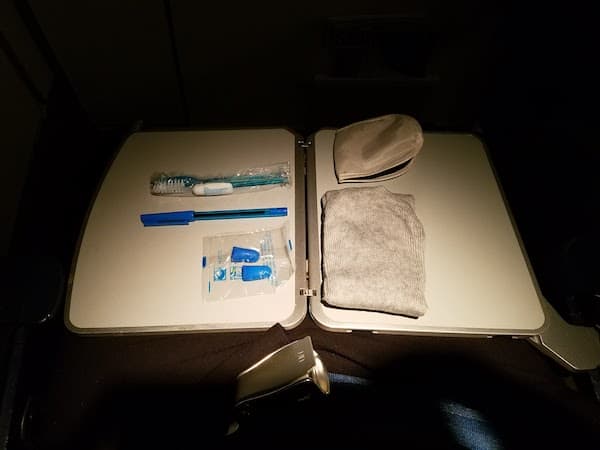 Upon finding my seat, I was offered a pre-departure beverage… of orange juice or water. 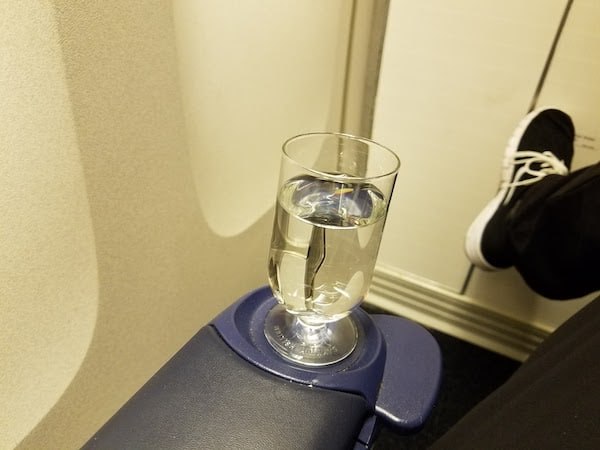 After take off drink service commenced and included a bag of pretzels. 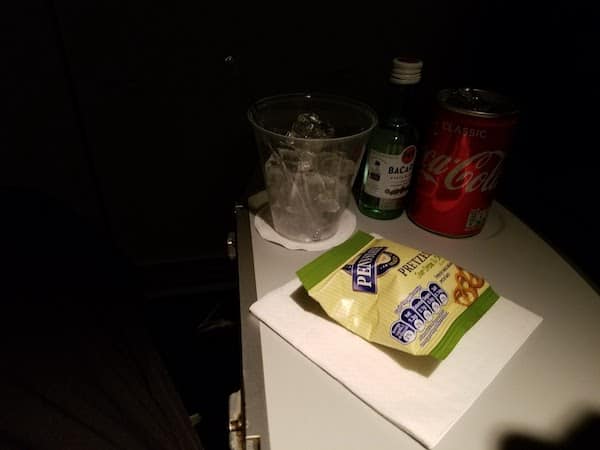 Menus were passed out explaining the food options for the rest of the flight. 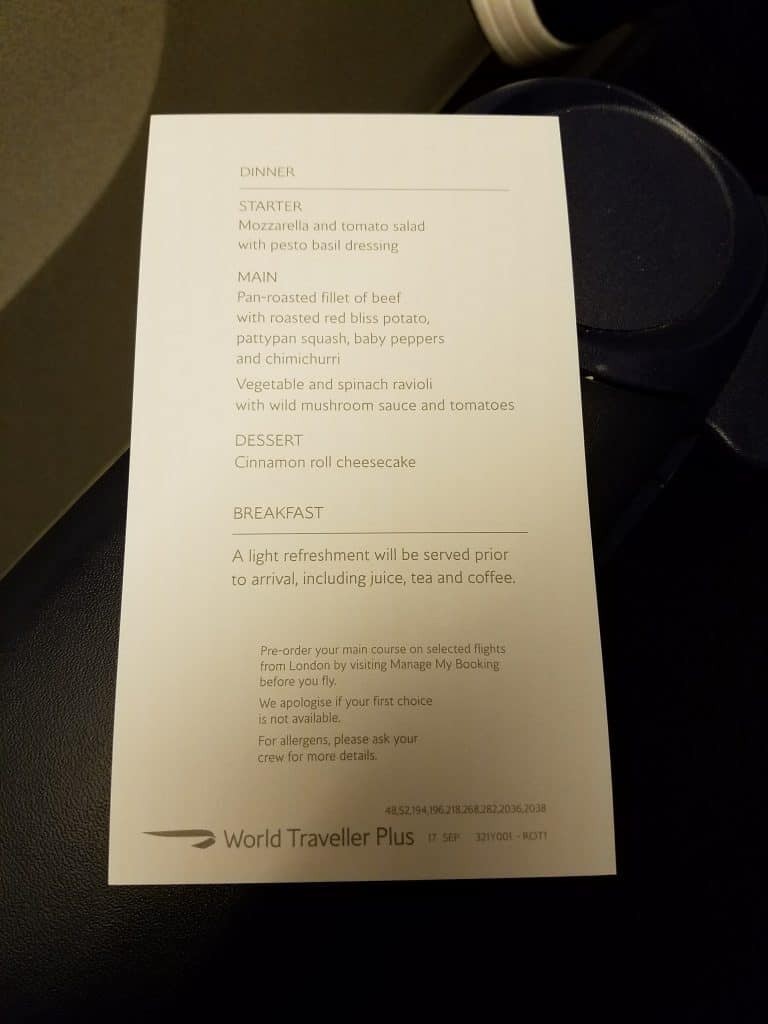 I picked the ravioli and was a bit surprised when all the courses were served on one tray at the same time.  The difference from Economy Class was that it was served on actual dish ware instead of foil tins. 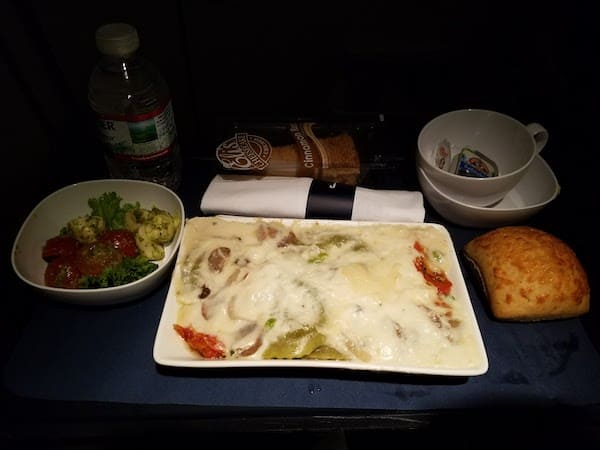 In hindsight, I should have ordered the beef.  As it was, I basically had a plate of cheese.  The salad was mostly mozzarella.  The pasta was cheese filled covered in a cheesy cream sauce.  The bread had cheese on it.  And the dessert was cheesecake.  My friend sitting in Economy had a very similar meal.

As the Premium Economy was between First and Business Class, I was able to access the snacks from the Business Class galley.  I am not sure if that was on purpose or just due to the layout of the cabin.

I slept through the breakfast service but was able to request a meal as they were standard boxed meals.  Inside was a pretzel roll with cream cheese and a granola bar.  Same breakfast as standard Economy. 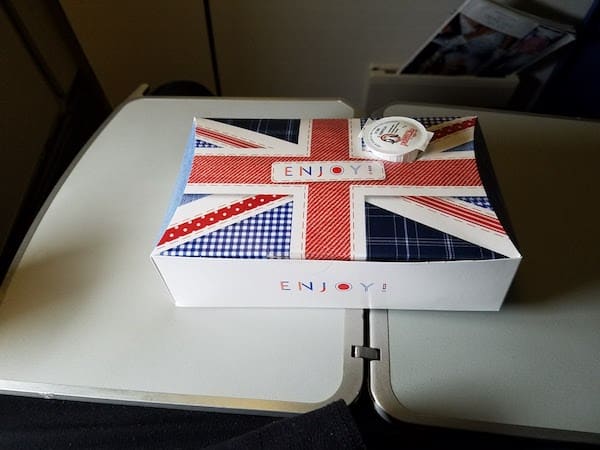 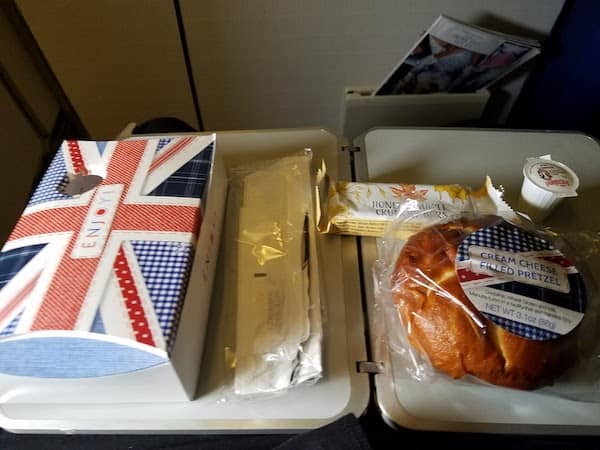 I am not sure I would ever pay the extra cost of World Traveller Plus again.  I didn’t even get my full 150% miles credited towards Alaska; it turns out the ticket was rebooked in to T class, not W, which earned me 100%.  Still better than my original 25% earning rate.  In speaking to an Alaska representative, I was told that typically Alaska credits the original class of service.  If I had paid the $350 and later found out I didn’t get any additional miles, I would not have been happy.  The “upgrade” from Economy was not worth $350.

Read my reviews of various other flights, including premium seats, here.