I purchased this ticket back in April when Qantas was offering a highly discounted round trip ticket from Los Angeles to Auckland for $225 after taxes.  The flight is a codeshare Qantas/American Airlines flight on an American airplane.

As an American Platinum elite (and also as a Alaska Gold MVP) I was able to select a Main Cabin Extra seat for free.  I picked seat 8D as I read this was the best Economy seat on the plane (more on that later).

The trip starts off poorly a few days before departure.  I put in for an upgrade request to Business Class, knowing it would cost $350 + 25k miles.  The upgrade clears however I am told on the phone that the upgrade is invalid and I would not receive the upgrade.  The reason: my ticket is through Qantas even though it is on an American plane.

I position to LAX from Seattle on Alaska and have a couple hours to kill before my flight.  So I decide to visit the oneworld Business Class Lounge in the International Terminal even though my flight leaves from Terminal 4.  The LAX-AKL flight was often delayed (in fact it had a 23% on time rating) so I expect a late departure. 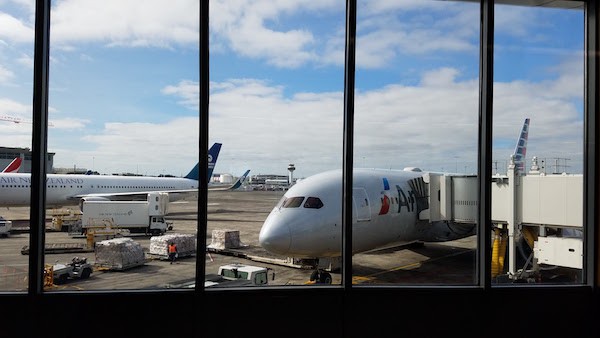 However, the flight status is for an on time 10:40pm departure.  I head to the gate and sure enough they start boarding around 9:40pm.  We take off at 10:56, only 16 minutes late and actually arrive in Auckland 30 minutes early.

When on board I am surprised how (relatively) small the 787 is compared to the 777 or A380 that I had recently flown.  When boarding through the front left door, rows 1-5 of Business Class are to the left and rows 6-7 are to the right.  Just past the mini Business cabin is the first of the Economy cabins that holds rows 8-18.  The second Economy cabin holds rows 19-30. Yes, you read that right.  There are only 30 rows of seats on the AA 787-800.  There is also no First Class. 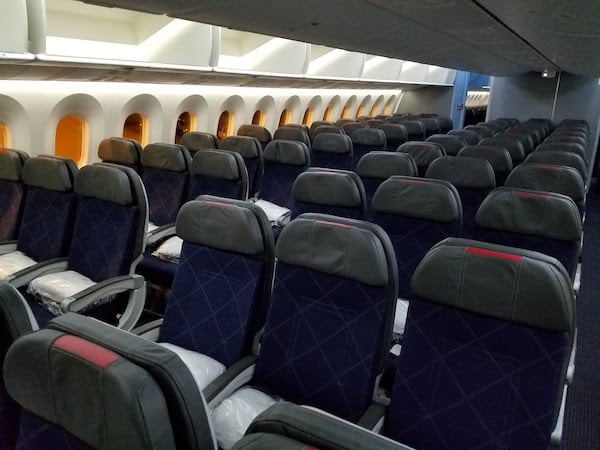 I picked seat 8D; an aisle seat in the middle section of the first row of Economy.  The strange thing about the configuration on American’s 787-800 is that the bulkhead in front of row 8 doesn’t line up exactly with the seats.  If you are in seat 8C or 8J your legs go into the Business Class aisle.  More legroom, but you feel like you are sitting in the middle of an aisle.  If you are in seat 8D or 8H you have a bulkhead that actually extends past your seat.  So you get an extra bit of space.

The downside of Row 8 is that the IFE screens are housed in the armrest and flip out.  This means the seats are slightly narrower than other rows.

The American Airlines 787 Main Cabin Extra LAX-AKL flight ends up being about 1/2 full so there are a ton of extra seats.  No one is in the right most seats of row 8 (seats JKL) so I move over there once we take off and have the row to myself.

Prior to take off the flight attendants pass out menu cards and earbuds to all passengers.  Each seat on the American Airlines 787 Main Cabin Extra LAX-AKL flight also has a thin blanket and pillow. 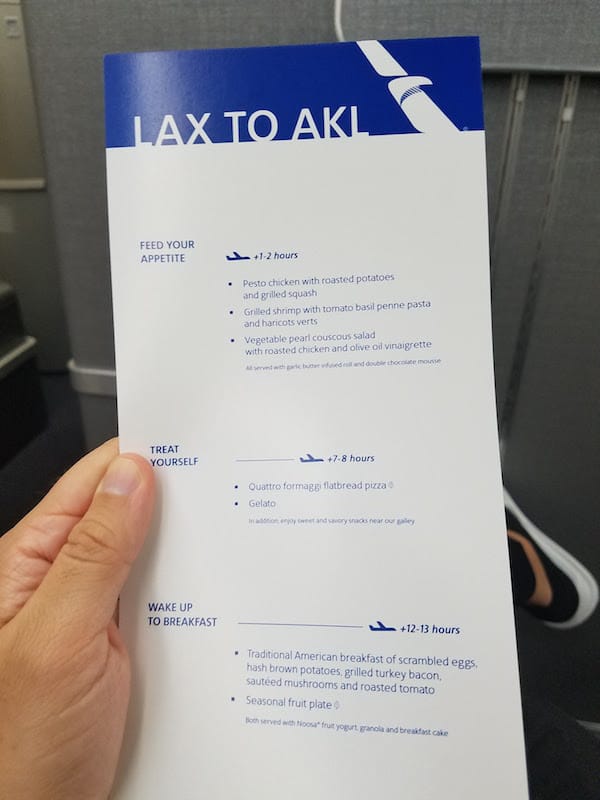 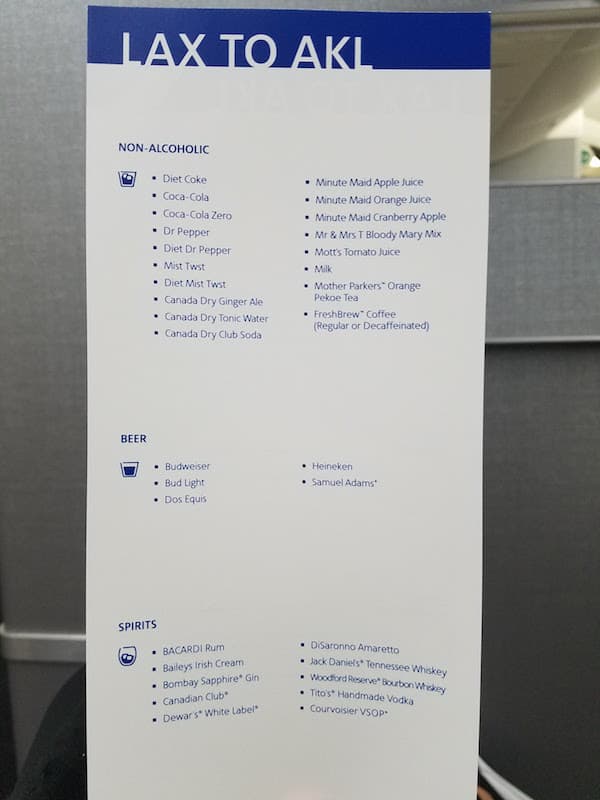 The older couple next to me express excitement that there is free alcohol on the flight.  The flight attendants are quite friendly, joking that they need to see his ID before giving him two bottles of whisky.

I speak with the crew quite a bit.  Most have been with American (not US) for many, many years.  The service is impressive; granted I have low expectations.  The least friendly of the lot is the only male flight attendant and also the youngest by at least 20 years.

Shortly after take off we are each treated to a semi warm, dry paper towel.  Thanks?

The drink cart come through next followed by dinner.  Both directions I have the “cold chicken” salad dish.  The flight attendants asks “do you want the hot chicken, cold chicken, or shrimp.”  Of note the food is better on the way to Auckland than on the return trip even though they were basically the same dishes. 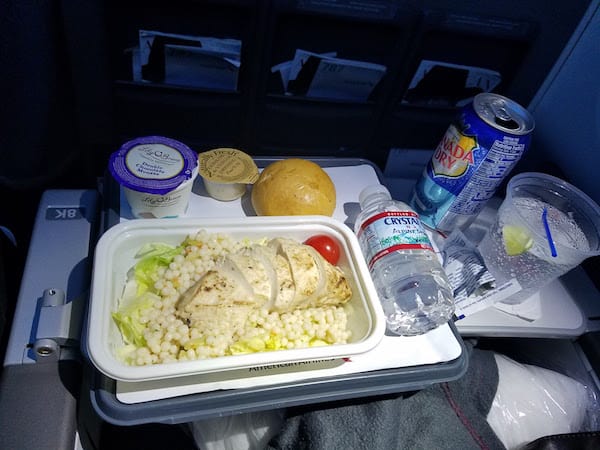 The food on the American Airlines 787 Main Cabin Extra LAX-AKL flight isn’t anything special.  I feel like my choice is somewhat healthy.  The salad is quite bland (the color speaks for itself).  The dinner roll has garlic butter in the middle which reminds me of the cheap Italian bread you get at the grocery store that is pre-buttered/garlic and sliced.   The dessert is a chocolate mouse that was okay.

Half way into the flight the snack is served — pizza and ice cream.  It was like a 10 year old’s birthday party! 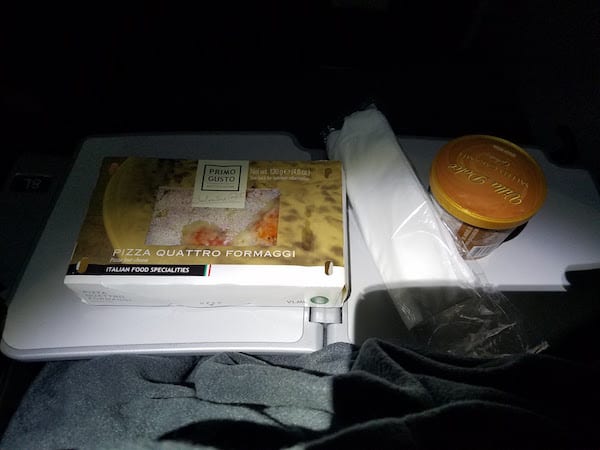 For breakfast you have the choice of eggs or a fruit platter.  I pick the fruit each way.  I appreciate the healthy option and noosa is my favorite greek yogurt. 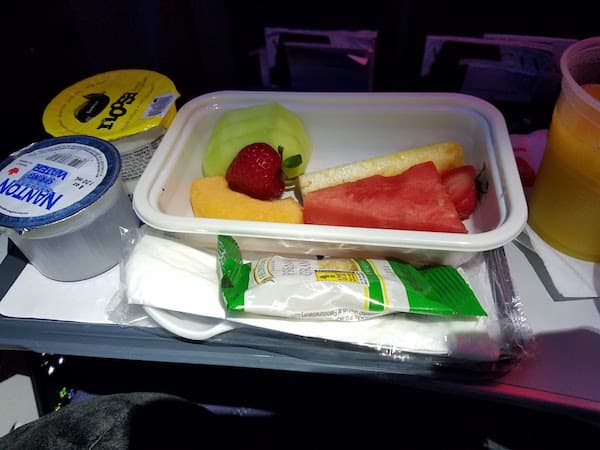 In addition to the meals there are snacks, water and juice in the galley that was self-serve. 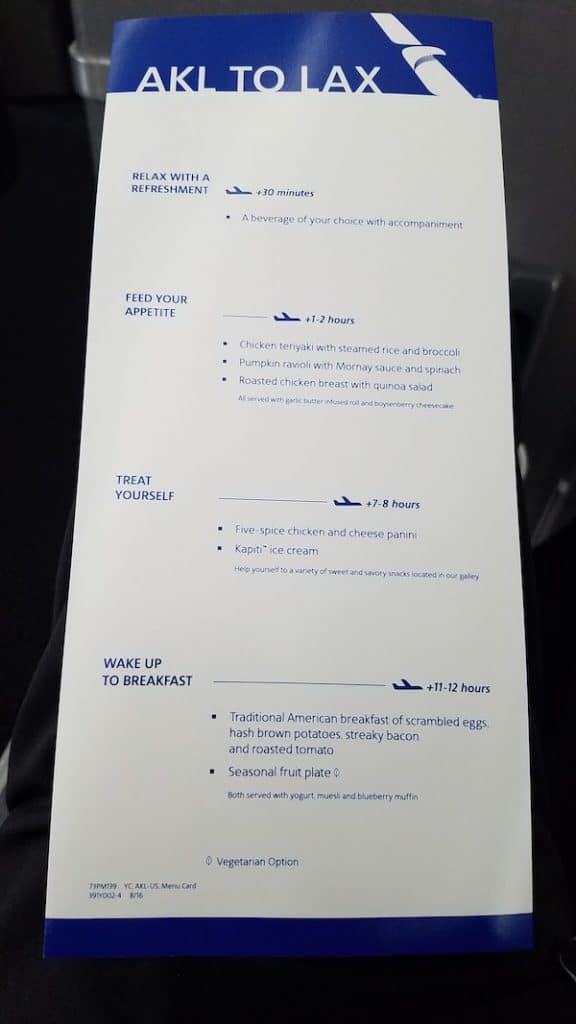 My return flight is much more full due to the fact that Selena Gomez and her tour  staff are all on the plane.

I do like the 787.  A lot.  It feels smaller than a lot of other planes that fly internationally.  The 787 also has the bigger windows and more humid air.  It definitely makes a difference on a 12+ hour flight.

I had a very positive inflight experience on my American Airlines 787 Main Cabin Extra LAX-AKL flight.  It showed me that there are huge inconsistencies from one AA flight to the next.  You can get an old plane and a bad crew and have a terrible experience.  Or you can get a new plane with a friendly crew and actually enjoy the flight.  If AA could standardize their product and staff I might actually fly them again some day.