Anyone with an American Express card was able to call in to request two free tickets.  It quickly sold out, but I was able to get my reservation.  The party barge, located at Pier 66 on Seattle’s waterfront, was open today form 9:00-1:00.

I arrived around 10:30am and had a to wait about 15 minutes as the barge was at capacity and the Coast Guard was not letting anyone else on.  There was an inside waiting area, however the (many) staff reassured us it would just be a few minutes.  ID’s were checked and lanyards were handed out.  Quickly we were on the barge. 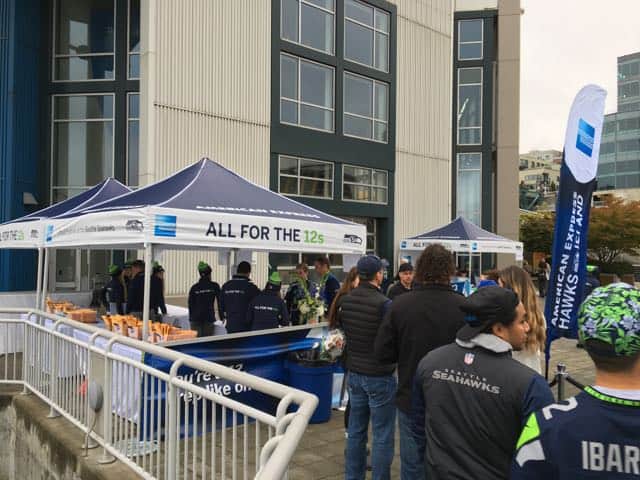 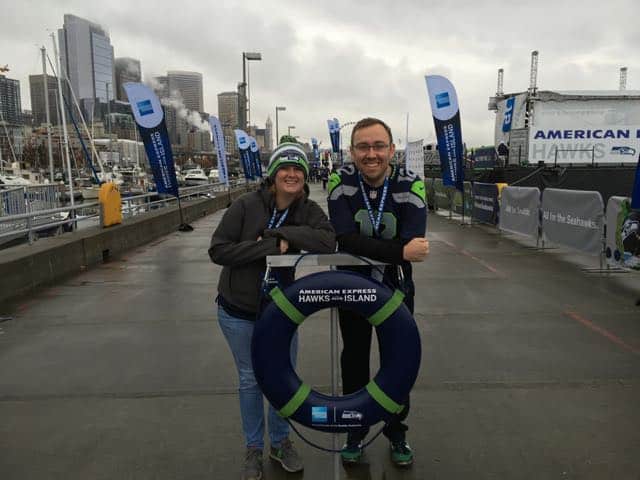 In a lot of ways it was set up like an Amex Centurion Lounge.  At the rear of the barge was the food area.  Four local restaurants had booths set up.  Each lanyard had a “passport” good for one food item from each booth.  In reality they weren’t too strict about the limit.  Each passport also granted guests two alcoholic drinks.  Snacks, including Seahawks branded local chocolate and Skittles, and non-alcoholic drinks were unlimited.

Along one side of the barge were first come, first served cabanas.  Had it been raining I think these would have been much more popular.  The other side of the barge had bar seating as well as bistro tables with chairs.  In the middle was the “field”, where there was room to mingle as well as some lawn games. 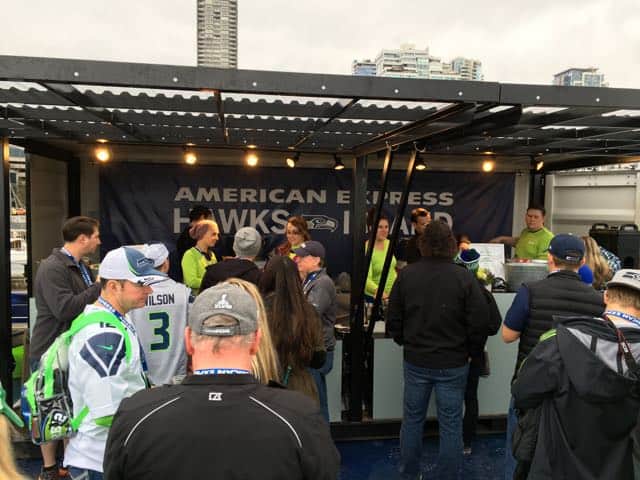 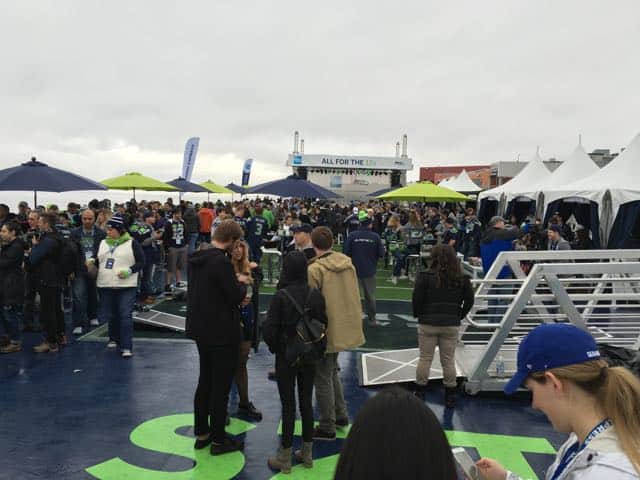 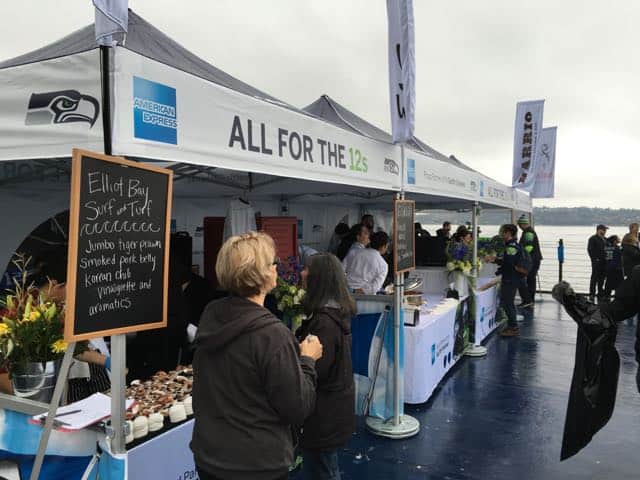 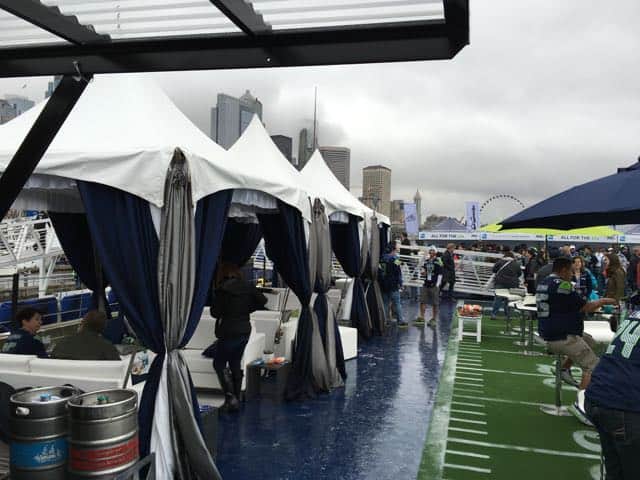 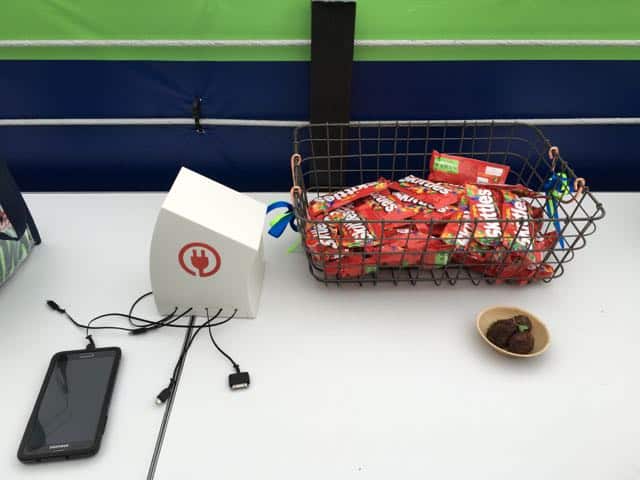 The front of the barge was where the stage was set up.  Portland based Everclear (of 1990’s fame) was the band of the day.  Former Seahawks running back Shaun Alexander was signing autographs and acted as the MC. 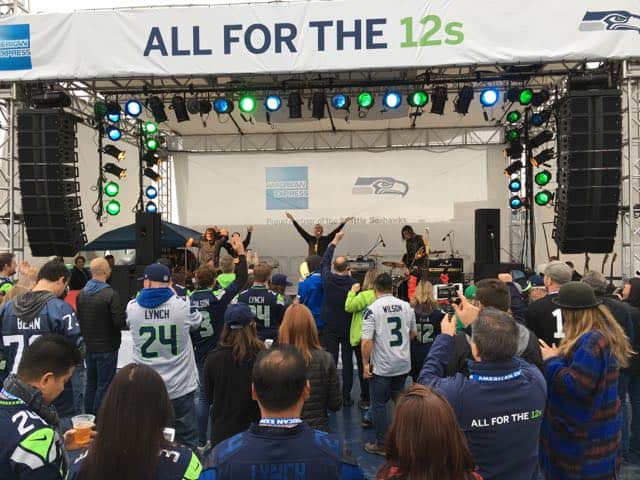 In addition to all the food and drinks, each guest was given an Amex Seahawks blanket for the game on the way out.  Shuttles were provided to the game (had you been lucky enough to have tickets). 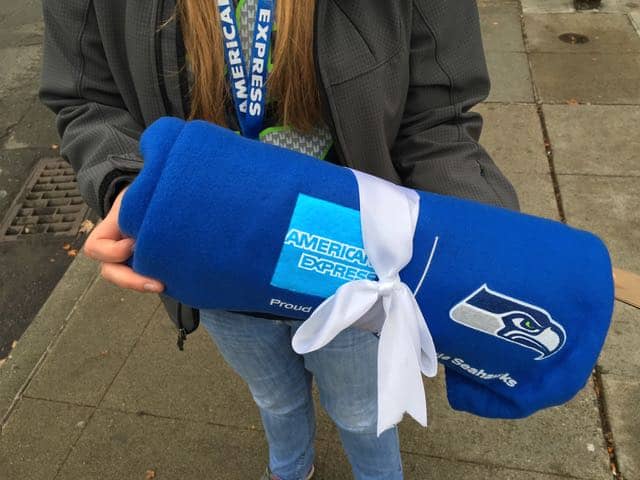 As you would expect, Amex throws a great party.  The Amex Hawks Island is trying to increase brand loyalty, especially with the Seattle based Costco switching from Amex to Citi Visa next year.  Clearly American Express invested a lot in this experience.  In Seattle, Seahawks are king, so it only makes sense for Amex to align itself with the franchise.  Hopefully they will continue this partnership with unique offerings.