In the world of travel blogging, I am still one of the new kids on the block.  While I have been collecting miles for 15 years, I only got serious about it less than a year ago.  After many credit cards and flights, I decided it is time to book my around the world award ticket to celebrate my 33rd birthday this year.  It ended up being a two tickets to make it around the world, but both were booked with miles.

I only accumulate air miles on Alaska Airlines Mileage Plan.  I have been a member since 2000 and since I live in Seattle, it makes the most sense.  99% of my domestic flights are on Alaska and they have great international partners.  Plus they have one of the best credit cards out there (that is easily churnable if you are into that sort of thing).

I had previously booked various “mistake fares” that had since been rescinded by the likes of BA and AA or in one case, ended up not making sense for me to fly.

While mistake fares are nice, they are risky and still cost a lot… often times in the thousand dollar plus range.

I have accumulated a lot of Alaska miles, so I decided it was time to make a booking for this winter.

I had always wanted to fly through Dubai on Emirates First Class.  It is a highly rated “bling” product and Dubai is a city I have always wanted to see for the spectacle.  Emirates flies a 777 out of Seattle to Dubai.  Flying out of LAX you can get on the A380 which includes the shower suites.  I’ve never flown the A380 (which is the largest passenger plane) and, well, shower in the sky!  So I decided to route via LAX.

One thing you should know about Alaska Mileage Plan redemption is that you can fly one award ticket on two airlines if one of those airlines is Alaska.  So, I could book SEA-LAX on Alaska and then LAX-DXB on Emirates for 90,000 miles and it would only count as one award ticket. 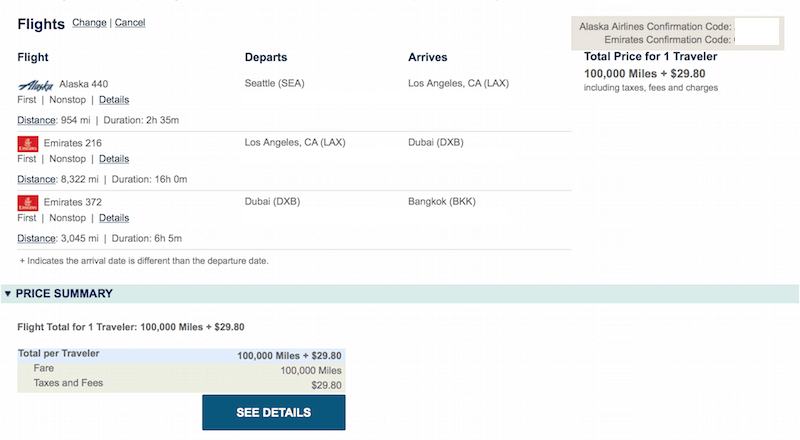 Furthermore, with many (all?) of the Alaska partners you can book a free stop over.  Therefore, for 100,000 miles I could book a First Class ticket from SEA-LAX on Alaska, LAX-DXB on Emirates, spend a few days in Dubai, and then fly DXB-BKK (Bangkok, another city I have wanted to see!).  So that is what I did.  I booked a three night layover in Dubai that I think will give me plenty of time to see the city.  12,321 miles in First Class and over 24 hours of time in the air.  While no (sane, normal) person would pay cash for this ticket, I was curious to see how much it would cost.  LAX-DXB-BKK in First would have been over $21,000.  I got it for 100,000 miles + $29.80 tax/fees.

Over 21 cents of value per mile redeemed, not bad!

Another First Class product I was hoping to try was Cathay Pacific.  After a few nights in Bangkok I would then travel home via Hong Kong.  Why not spend a few days there as well on a free stop over?

Cathay Pacific is the only Alaska partner that cannot be booked online.  You must call in to Alaska Partner Rewards to book it.  However, you can get an idea of which flights have award space available.  You just have to visit JAL’s website, sign up for their loyalty program, and then you can search for Cathay Pacific award space… it is the same availability that Alaska will be able to access.  More info can be found on FlyerTalk.

I will again be connecting through LAX, this time out of necessity because Cathay Pacific doesn’t fly to Seattle.  Unfortunately Alaska didn’t have First Class award space available; so I will be stuck in the back for my final 2 hours… I guess I’ll survive (or get bumped up, the agent on the phone said she would waitlist me and if an award spot opens would upgrade me).  Serious first world problems.

For this flight my miles were only worth 12 cents a piece.  But I guess beggars can’t be choosers 😉

Around the World Award Ticket

For 170,000 miles + $110 I will be flying First Class around the world in two of the top airline products out there with stops in three fantastic cities (I am not counting my layover in LA, sorry LA!).  I had hoped to fit Australia into my around the world award ticket, but I ran out of vacation time from my job (ugh, always getting in the way!).  Lucky for me I have enough miles to book a flight to Australia in the future.

2 thoughts on “Around the World Award Ticket”