There are two major airports in Istanbul (although a third is under construction that when finished will be the largest airport in the world); however most international flights come in to Ataturk, located on the European side of the city.

An e-Visa is needed for Americans (as well as various other nationalities).  You can purchase them online ahead of time or at a kiosk in the airport upon landing.  I purchased mine from a kiosk for $20 USD with a credit card.  You then take the printout to passport control and you are good to go.  It is a pretty easy process.  Just hang on to your printout for the duration of your trip. 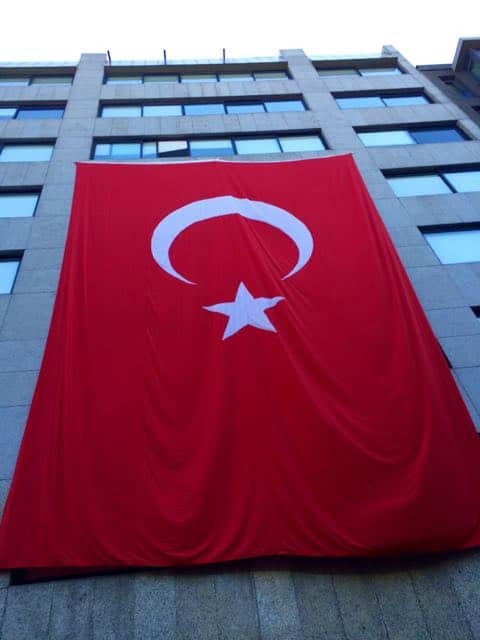 The easiest way to get from the airport to the city (about 14 miles) is via taxi, just make sure to get some Turkish Lira from an ATM before leaving the airport.  It cost me around 60 TL in traffic.  My taxi driver spoke English and was very honest.  I found that the taxis from hotels and the airport are pretty honest (still keep an eye on the meter); however I ran into a taxi driver that wanted 70 TL to get from the Spice Market back to my hotel (should have been about 20 TL).  I ended up getting out of the cab and taking public transit.

I stayed for the first two nights at the Grand Hyatt Istanbul (my review), located on the Europe side on the north side of the Golden Horn by Taksim Square.  Most of the tourist sites are located south of the Golden Horn and are accessible by the street car.

I would highly suggest the Big Bus hop on hop off tour.  For €35 (or €25 if you pre order online) you get a 24 hour pass.  There are two routes (Red that goes through the main tourist areas and Blue that goes up the Golden Horn) included in the price.  The audio guide is helpful in getting a feel for the city.  The Red route leaves from each stop every 20 minutes. 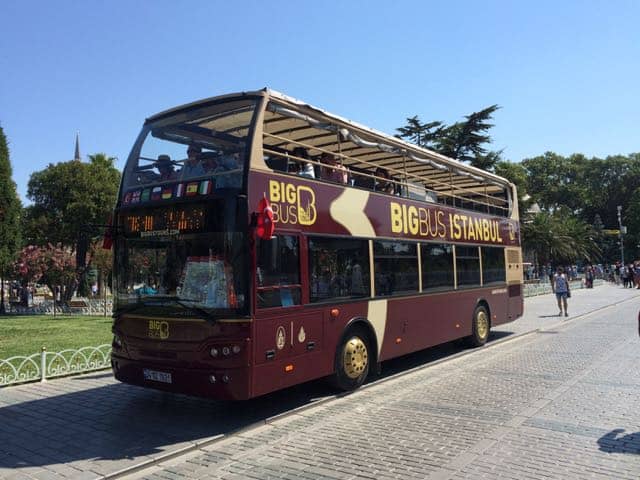 The must see area is Sultanahmet.  This is where the Blue Mosque, Hagia Sophia, and the Cisterns are located.  The Grand Bazar is also a short walk from there.  There is a tram stop at the main square.

My first stop was the Blue Mosque which is visible from many parts of Istanbul.  Be aware of two things when planning your visit. First, the Mosque is closed during prayer time.  I think the first one is at 12:30pm, so it is best to do the Blue Mosque in the morning.  Second, there is a dress code.  Shoulders and legs must be covered.  For women, head must be covered as well.  When you queue up to get in, you have to pass by a stand where you can borrow a shawl (basically scrubs) to wear if you are not prepared.  Notice as you enter the Mosque the door is lowered so you have to bow to get through.  The reason it is called the Blue Mosque is that many of the mosaic tiles inside are blue; although I am not sure how true this is.  I saw many colors of tiles.  The space is expansive and worth checking out.  Entrance is free and you likely will only spend a few minutes actually inside of the Mosque. 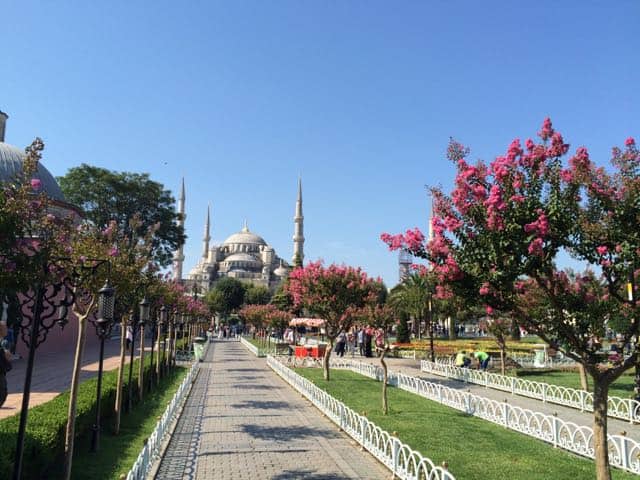 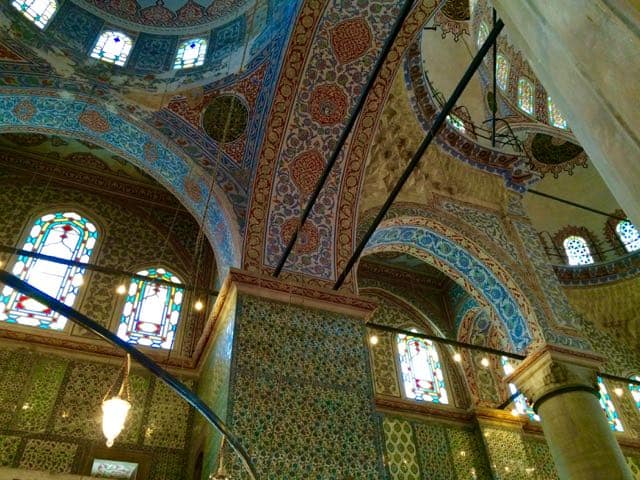 The next stop is just a short walk away.  Hagia Sophia was built as a Christian church but has more recently been used as a mosque.  I found Hagia Sophia to be much more interesting inside than the mosque.  Be sure you check out the upstairs for some great views.  Admission is 35 TL and I would plan to spend at least an hour. 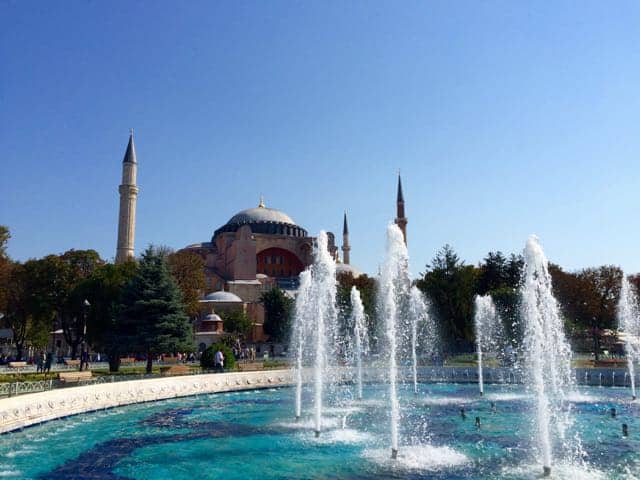 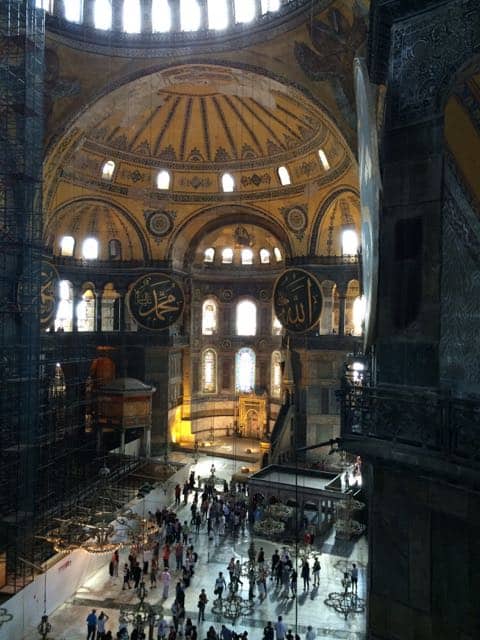 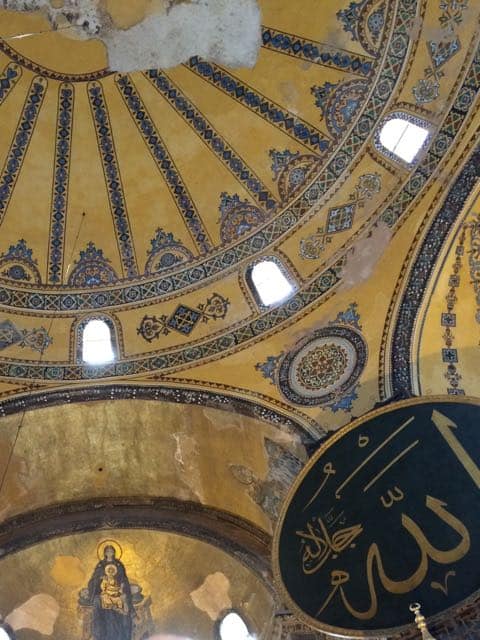 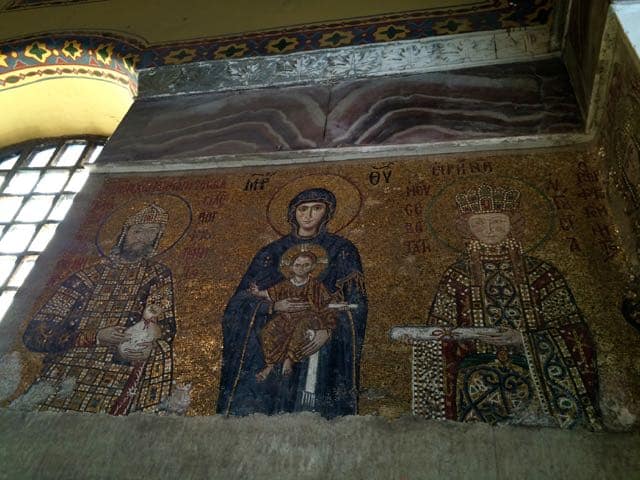 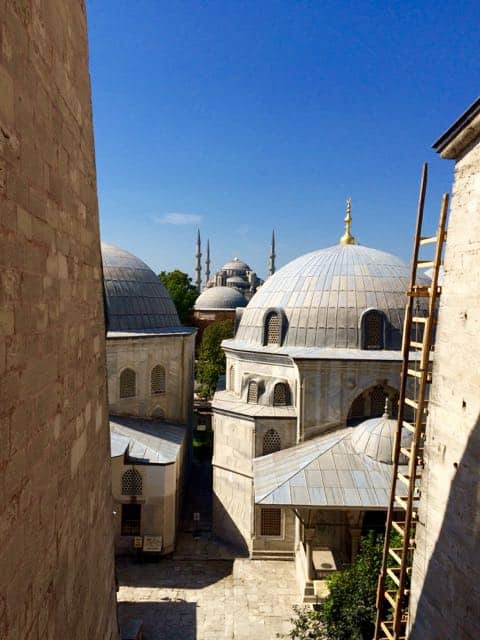 The third stop in Sultanahmet is the Basilica Cistern.  It is in the same square as the Blue Mosque and Hagia Sophia, just across the tram tracks.  I rented the audio guide, but if you do a bit of research ahead of time it isn’t needed.  There are really on a few things to see in the underground reservoir.  It is more about the mystical experience of the place.  Admission is 10 TL and I would give myself at least half an hour to experience it. 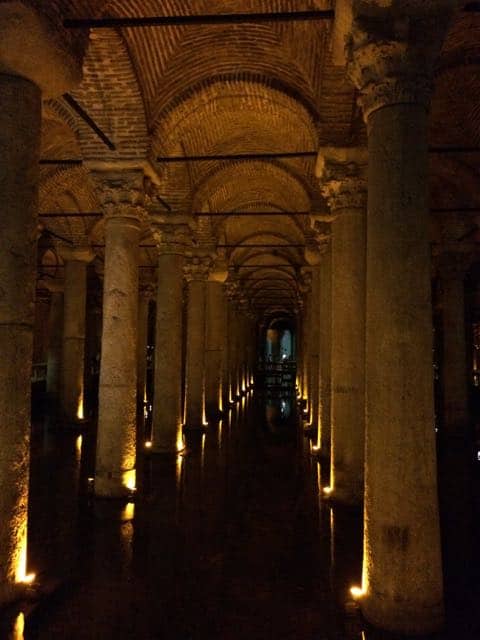 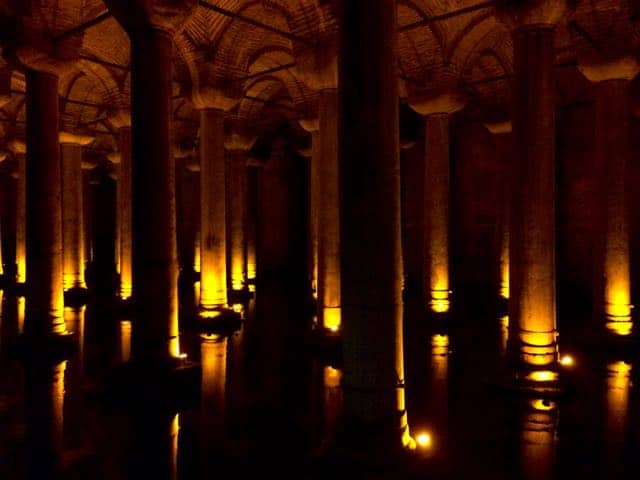 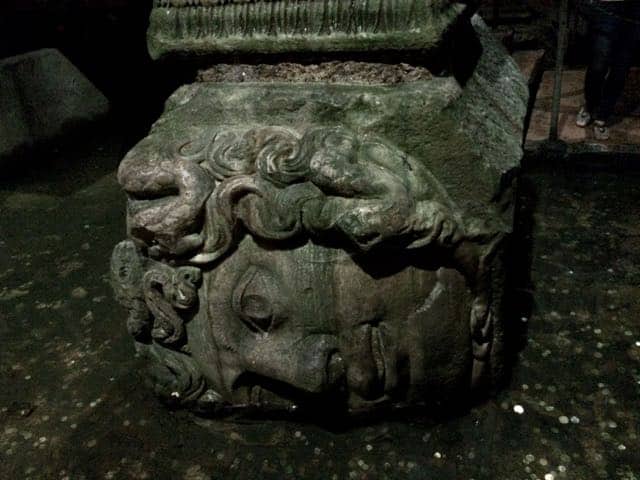 For shopping, the overwhelming Grand Bazar is just a few blocks away.  Many opportunities to buy junk that you don’t need.  Worth checking out just for the scale of the place. 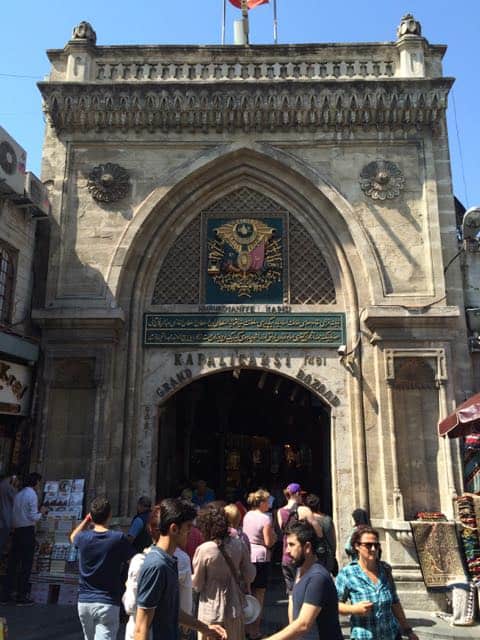 I found the Spice Market to be more interesting, less overwhelming and a bit cheaper (be ready to barter if you want to get the prices lower).  Many stalls selling spices, turkish delight and souvenirs.  You can get the to Spice Market via the street car.  The Big Bus also makes a stop here (both Blue and Red routes).  If you want to walk across one of the bridges, you can easily do so from the Spice Market. 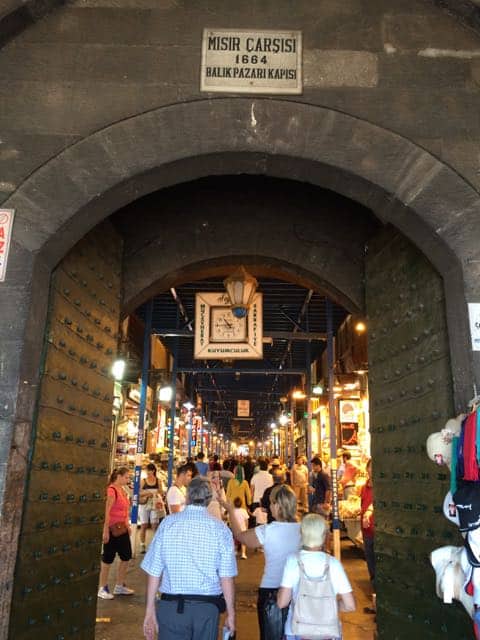 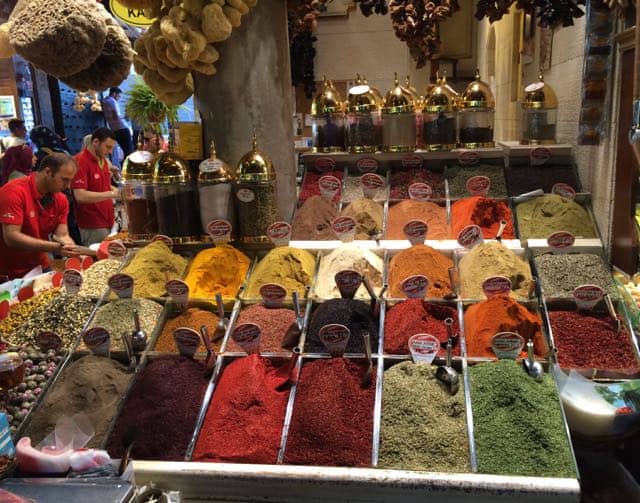 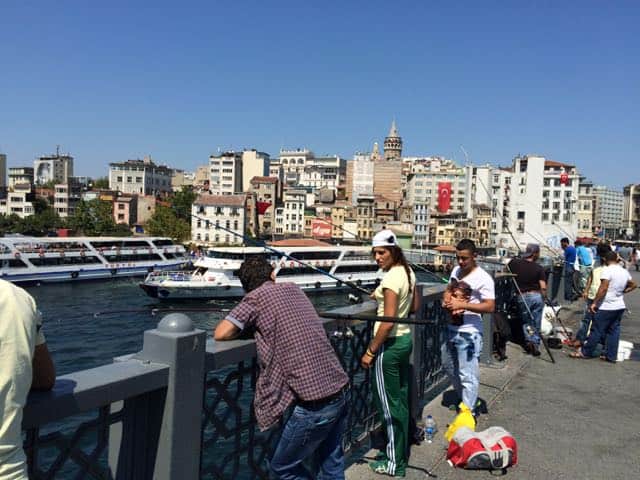 Walking across any of the bridges is an experience.  Good views and fun people watching.  Many locals stand and fish from the bridges all day.

You can also do a ferry/boat cruise tour.  Had I more time I would have liked to check this out.

The final must see is Taksim Square, the location of large celebrations and demonstrations.  You can also catch the Metro or funicular (that goes down to the waterfront) at Taksim Square.  It is another stop for the Big Bus as well. 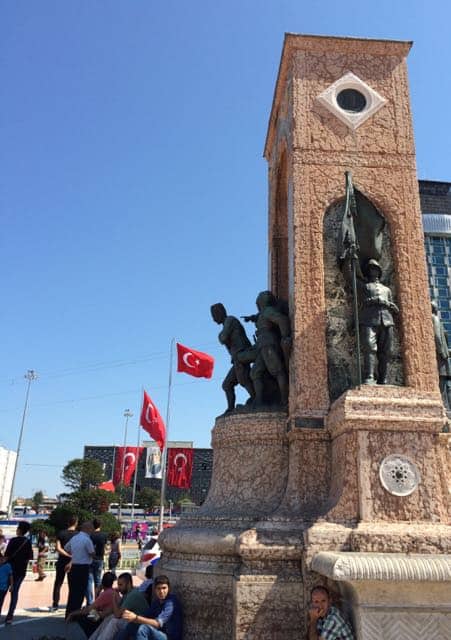 Of course there are many other things to do in Istanbul.  Eat fish and kebab.  Check out museums and palaces.  Cross the bridge in to Asia.  Have a turkish bath.  People watch.  I understand that Istanbul has a vibrant night life as well, but was too exhausted to check that out.

For my final night in Istanbul I stayed at the Hyatt Regency Istanbul (my review) that is not far from the airport.  I had a 6:00am flight and thought it would be easier (plus 1 one more stay credit towards Diamond status with Hyatt for 2016!).  A brand new property located right on the water, it was a wise decision.