With a flight at 6:00am, I decided to spend my last night at the Hyatt Regency Istanbul which is located near the airport.  The property opened in January (2015) so is practically brand new.  The Regency is a beautiful hotel and really fits in better with the Grand brand.  The architecture is very modern; the building looks like the bow of a cruise ship overlooking the water. 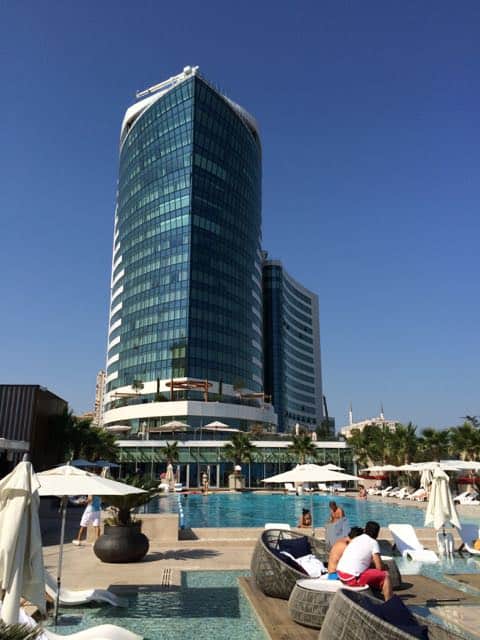 Location: There is not much around the hotel yet, however there is a lot of construction and clearly there are plans for development.  Currently I don’t think there is anything you could walk to.  It is far from downtown as well, so I would not suggest staying at the property if you have intentions of sight seeing in town.  It really is ideal for first/last night in town before flying out.

Check In: Like most hotels in Istanbul it seems, you must first go through security to get into the porte cochere and then again into the hotel lobby.  Unlike the Grand Hyatt, the Hyatt Regency Istanbul has an x-ray machine along with the metal detector.  The lobby, like the rest of the hotel, is modern and reminds me of the Cosmopolitan Las Vegas.  Large chandeliers, sweeping staircases, oversized bright furniture. 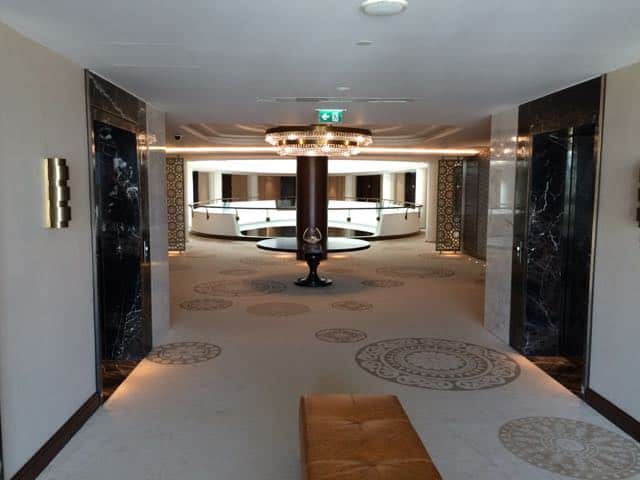 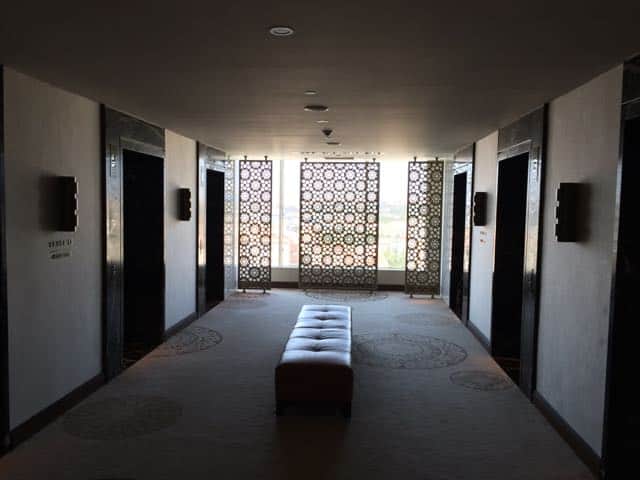 The staff was very welcoming; in fact it took two people to check me in.  Every detail I could want was explained to me.  When I said I had an early flight, I was offered a breakfast bag delivered to my room, which I accepted (unfortunately it didn’t come the next morning).

I was given a twin room (I was traveling with a friend) on the 15th floor with a view back towards the city center.  The Regency Club was on the 16th (top) floor. 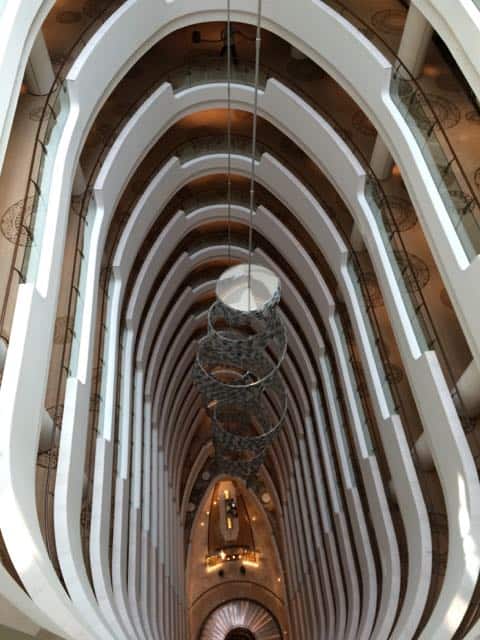 Room: The room size was the only thing that would make it fit into the Regency class.  It was on the small size, but the bathroom was quite large.  The furnishings were all modern with touches of Turkish design.  Floor to ceiling windows allowed for great views of the water. 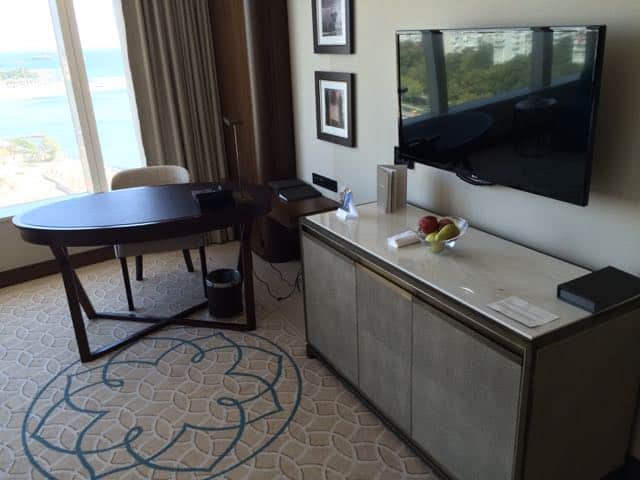 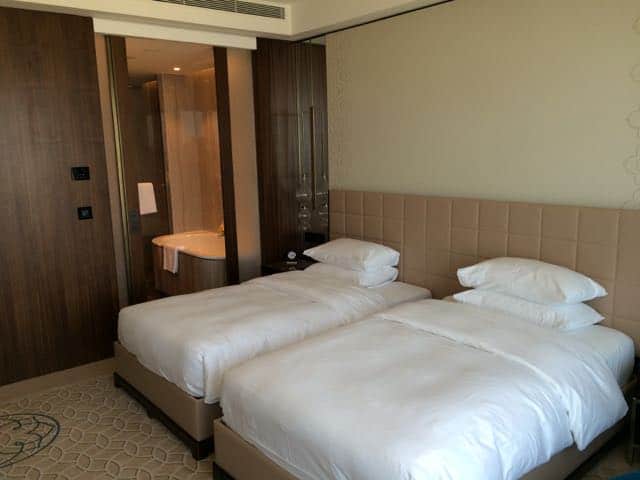 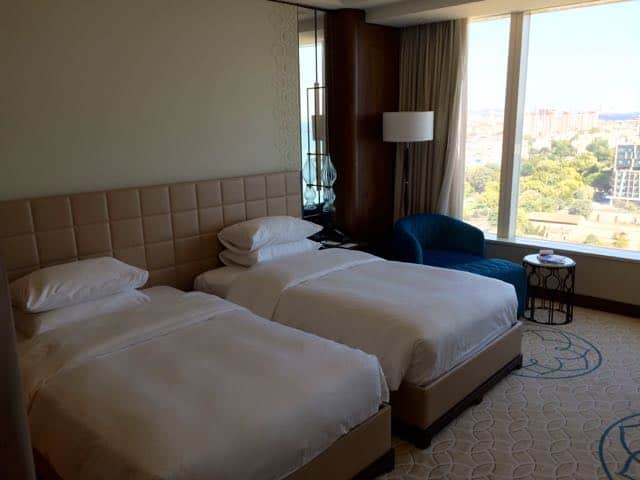 The controls light and temperature controls were automated touch sensitive panels.  Other reviews I read complained that the room was too warm even with AC on full.  I agree that it could have been cooler for sure. 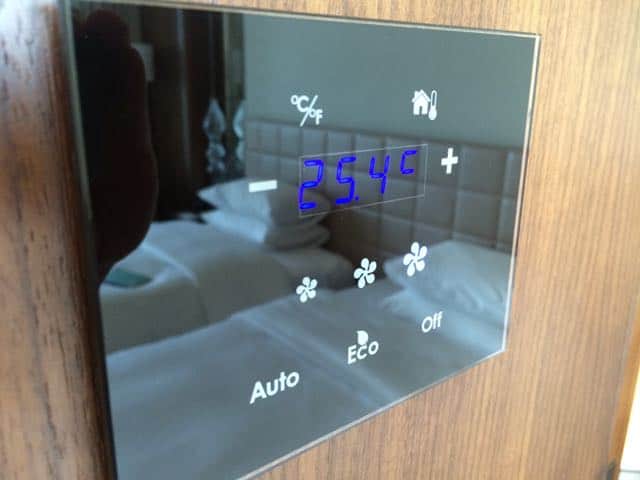 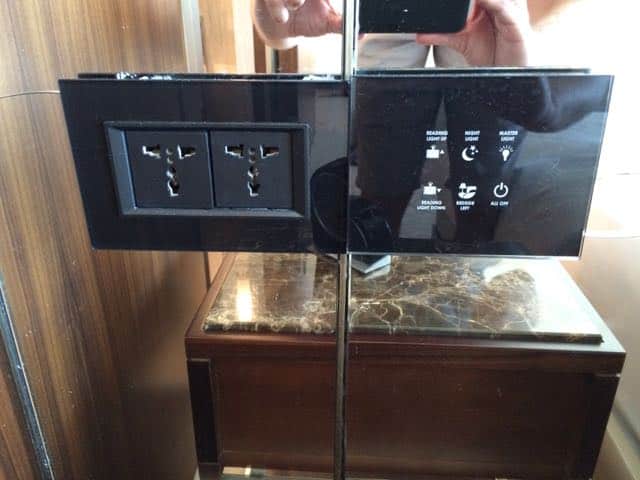 Bathroom: The bathroom was very large for a Regency.  There was a large soaking tub, separate shower with rain shower head and wand, as well as a toilet with a separate door.  There were two doors to the bathroom (both sliding); one next to the door to the hall and one into the bed area.  Both were glass which did not lead to much privacy.  The lighting was quite strange; there were lights attached to the mirrors but no switches to turn them on.  I am not sure if this was just a flaw with my room or with all of the rooms.  The light on the mirror didn’t work either. 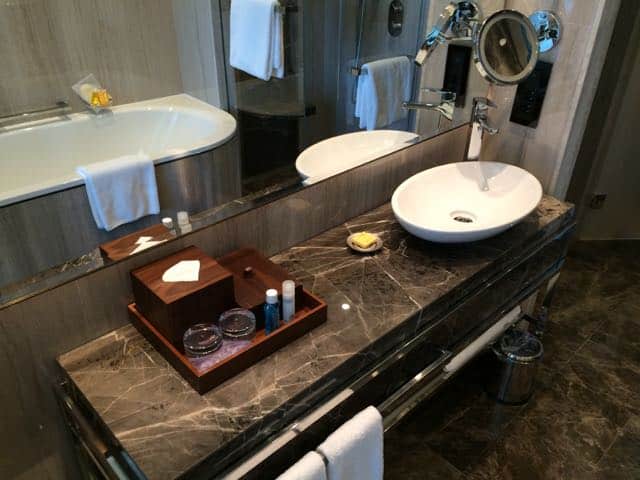 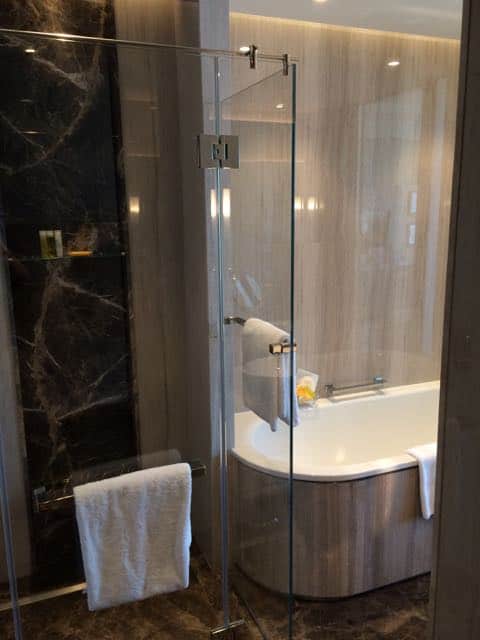 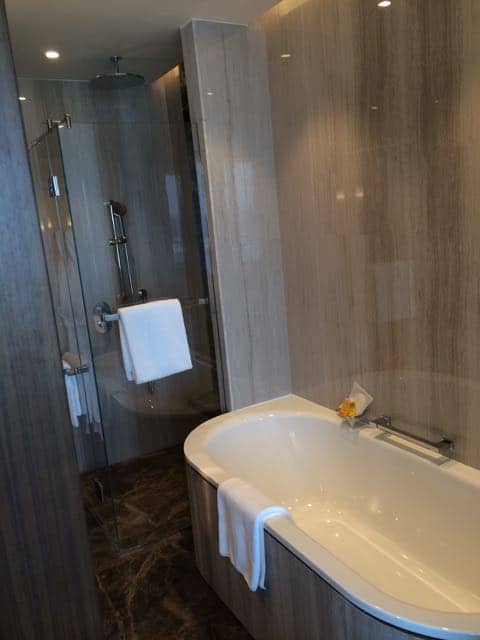 The bath products were Portico; which I prefer to the standard KenetMD at most Regency properties. 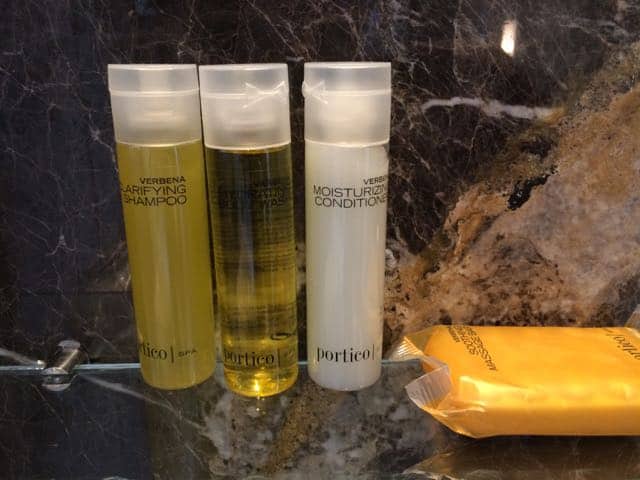 Pool: There were two pools on site; one indoor and one outdoor.  The indoor pool also had a hot tub; but the air in the room was extremely hot and I can’t imagine spending time inside.  A first for me; there were two women in burkas in the hot tub. 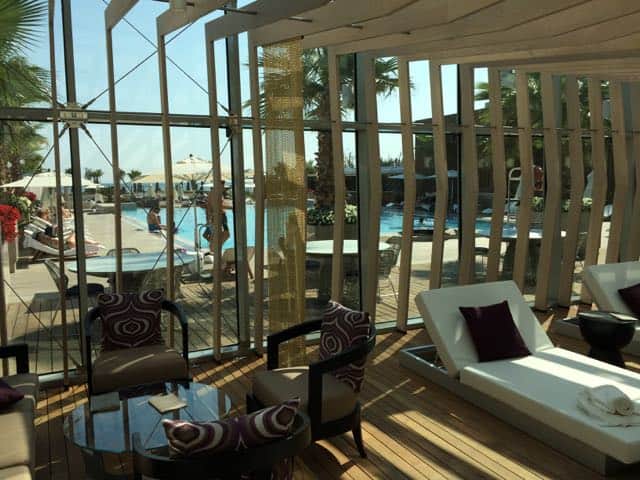 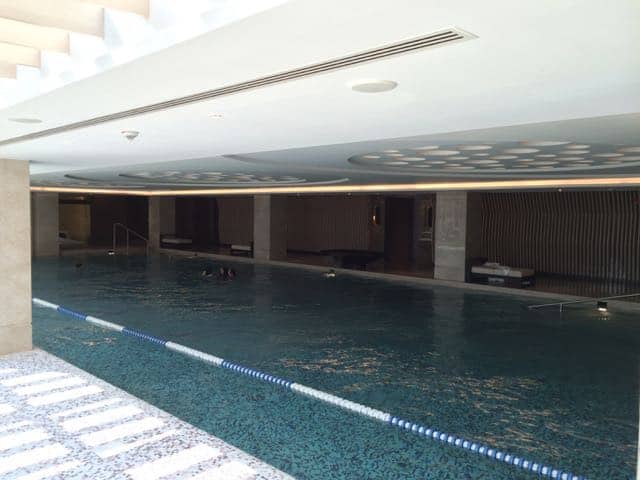 The outdoor pool was lovely.  There was now shallow end, however there was a second pool area that seemed more like an adult relaxation pool.  It was only a few inches deep and had chairs in and around it.  There were plenty of lounge chairs and cabanas (that looked like they were first come first serve, no fee).  Beyond the pool but before the beach was a nice green lawn. 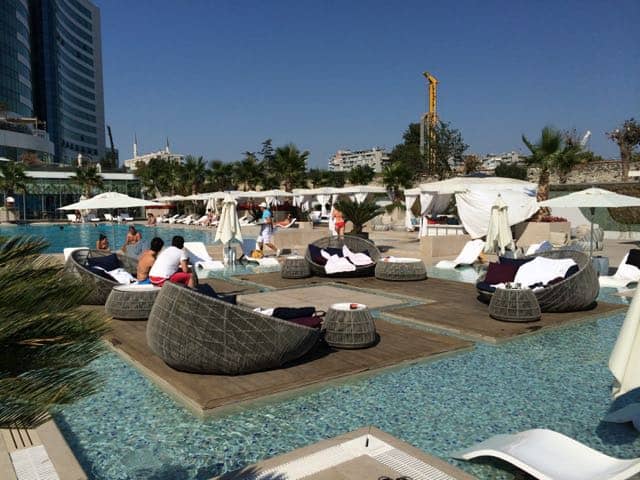 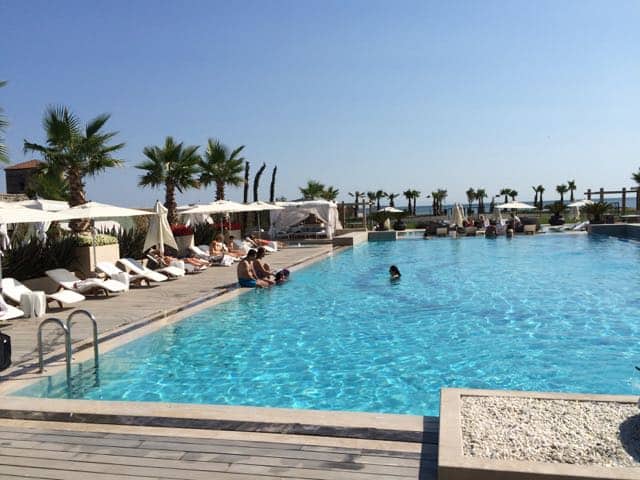 Gym/Spa: The gym was small but looked well maintained.  There was a separate yoga studio.  The changing rooms (between the gym and pool) were quite extravagant; what I would expect from a Park Hyatt.  Lockers, steam room, sauna, a number of showers.  There was even a large bucket that collected ice that fell from the ceiling to use to cool down.

I decided to get a Turkish bath (or Hamam) and massage.  I wasn’t exactly sure what a Turkish bath was, but I had heard about them and decided to give it a try.  Turkey seems to be a more modest society; I was basically told I would have a male masseuse when I checked in.  I was also given a pair of disposable shorts to wear during the treatment.

The strangest thing was that I was not allowed to pay for the treatment by charging it to my room.  They required a separate payment.  So I had to run upstairs to get a credit card.  When I brought my Hyatt Visa, the spa staff was amazed by my card.  She said she had never seen a Hyatt branded card before!

I was first taken to the hamam which was located off the steam room and sauna.  There were two separate hamams on the men’s side.  Basically a hamam is a large heated stone block that you lay down on.

Your attendant/masseuse (naked from the waist up) then begins to wash you with gloves that are rough like loofas.  There is a lot of dumping of water on you in between scrub downs.

After you are scrubbed down and rinsed, the attendant then creates suds and literally covers you head to toe in about a foot of soap suds.  More scrubbing and rinsing.

I was then lead out to a relaxation room where I was left for what felt like too long of a time.  I finally got up to see if I was supposed to check in for my massage.  Back came my masseuse, fully showered and in professional attire.  I was lead to a standard spa massage room for my deep tissue treatment.

The masseuse/Turkish bath scrubber was very professional and the entire treatment was very relaxing (except for the couple times I thought I might drown in the barrage of water in the bath).  Definitely worth the experience.  Both treatments came to a total of 380 TL (about $125 USD).  I am sure there were cheaper options in Istanbul, but the spa at the Hyatt Regency Istanbul was very clean and the staff were professional.  In Turkey a 10% tip is standard for restaurants, so I planned to tip this amount.  The problem was I only had my credit card and they couldn’t put a tip on the card!  So up to my room I went, got my 40 TL and returned to offer the tip.

Regency Club: The Club had a great view from the 16th floor.  Like the Grand Hyatt, they hosted a happy hour from 6-8pm.  I made it a light meal and once again the desserts were excellent. 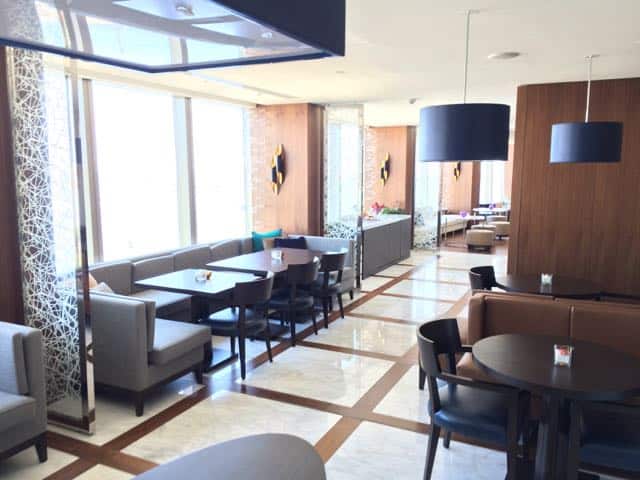 Service: The staff were all very eager to please and friendly, however there were still some kinks to be worked out.  Requiring credit card payment at time of spa treatment, forgetting to send up breakfast, no one taking drink orders by the pool.  All very friendly, but perhaps still just need a few more months on the job to really get it perfect.

Overall: The Hyatt Regency Istanbul is a beautiful, classy property that should be rebranded as a Grand Hyatt.  However, it is not for tourists looking to explore Istanbul due to distance from the city.  It is also not right at the airport, so my guess is that it is built with the intention of the area growing (and there is a ton of construction all around it).  I believe I paid right around $100 for the night which seemed like quite a bargain.  I wouldn’t hesitate to recommend the property to someone with an early morning flight out of Istanbul or a late flight arriving into the city.