The Hyatt Regency Aqaba is located in the Ayla marina development in southern Jordan on the Red Sea.  Opened in late 2018, the property has a total of 285 rooms spread out across multiple buildings.  I stayed for two nights at the end of my visit to Jordan before flying out of the Aqaba Airport.  I booked each night using points for 9,000 per night as cash rates were over $200 USD per night.  The property is a Category 3 which means it can cost between 9,000 and 15,000 points per night.  I visited in July and my dates were considered Off Peak.

Aqaba is located at the tip of the Red Sea’s Gulf of Aqaba on Jordan’s border with Israel.  It is where Egypt, Israel, Jordan and Saudi Arabia all converge.  Eilat, Israel is just on the other side of the border.

The Hyatt Regency is located in a new high end gated development with a marina known as Ayla.  When you are at the hotel property, you would only leave if you had a car or by taxi (or I suppose by boat).  The biggest attraction in Aqaba is the diving in the gulf.

Once I arrived at the property I stayed until it was time for my departure.  It seemed like most guests were Jordanians and Saudis.  I would guess that it would be much more popular with Europeans or Americans during the winter months.  I don’t think many (besides me) would visit Jordan in the summer heat. 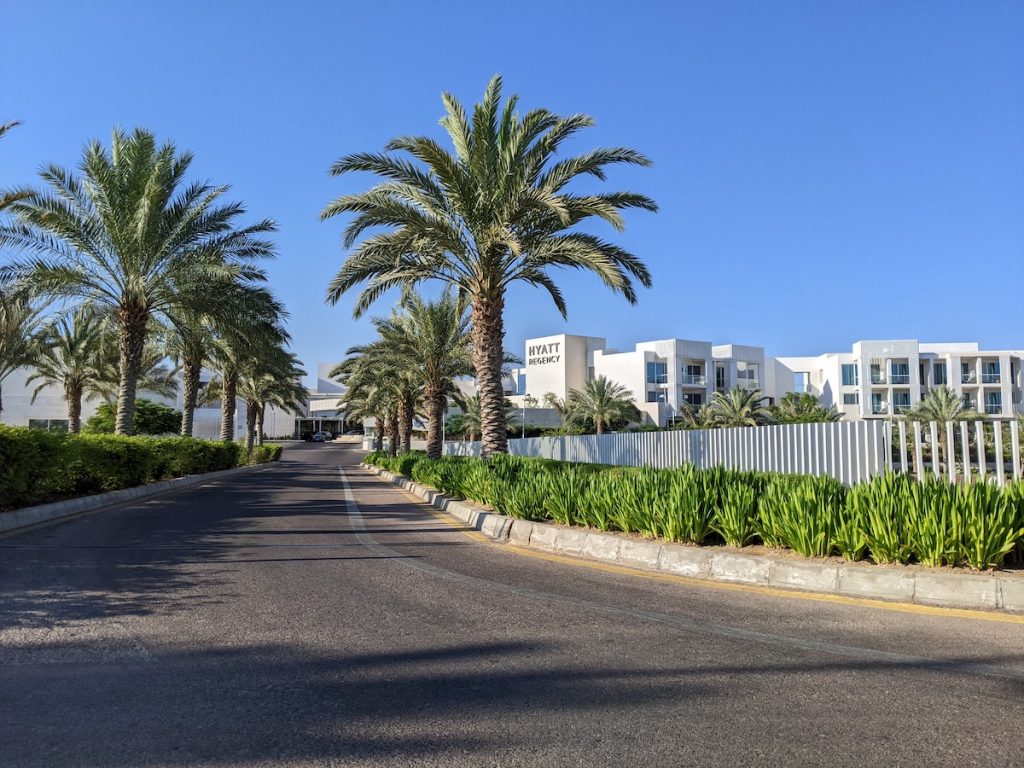 I arrived around 3pm.  The valet took my car.  Free valet parking is offered for all guests.  After going through security, the check in staff let me know I had been upgraded to a Regency Suite.

The lobby is enclosed and air conditioned but most of the rest of the property is open air.

The lobby looks out over the pool and marina.

I was assigned Room 1305 which is one floor above the Lobby Floor (which is the 2nd floor) in the closest building to the lobby.  The hallway is rather drab, which is one of the only complaints I have about the property.

As you enter the Regency Suite, a powder room is on the right and a large living room is straight ahead.

In the storage closest to the door is the coffee set up and a mini bar with free soft drinks and water.

I also had a couple of welcome gifts that included various sweets and a fruit plate.

Both the living room and bedroom have sliding glass doors that lead out to a large patio.  It was too hot to use during my stay but would be nice in cooler weather.

The view from my room was of some of the canals and other parts of the development.  In the distance is Israel.

The bedroom has one king bed against an orange accent wall.  On one side of the bed is a built in lounge chair.  A small desk is against the wall with the TV.

The lights are controlled by switches on either side of the bed.  Unfortunately the light control panel is back lit all the time which puts off a white glow and doesn’t allow the room to ever get totally dark.

There are also USB and international power outlets on either side of the bed though I couldn’t get the plugs to work.  There was another outlet by the desk that I was able to get to work (though it sparked a bit).

The room’s air conditioning is set to only go on when someone is in the room.  The problem is that it was over 100 degrees during my stay and the room would easily get up to the 80s when I left and take hours to cool back down.  I called thinking something was wrong with it and the maintenance was able to over ride the energy saving feature during my stay.

There is a small hall from the bedroom to the main bathroom.  On either side are built in closets.

A small powder room is off the living room just inside the entry door.

The main bathroom is large.  A free standing tub is the first thing inside the bathroom.  It is against a marble wall – the shower is on the other side of this wall.

Across from the tub is a glass door that hides the toilet and bidet.

A large mirror with built in lighting is on the back wall.  The dual vanity has plenty of counter space.

Around the corner from the tub is the shower.  It includes both a high rain shower head and a handheld shower wand.  Both offer very good pressure.

The bath products are actually made in Jordan and very high quality.  The Mövenpick in Petra used the same products.

There is a large Regency Club on the ground floor with views overlooking the marina.  I believe the Club is adults only.  Therefore, families can have their breakfast in The Olive Tree.

The first room is made to look like a library.

The middle room is where the breakfast and evening buffet and beverages are located.  Below are some of the items available during breakfast.  Outside on the patio was an additional omelet station and fresh made pancakes, French Toast, and waffles.  The breakfast is impressive for a Regency Club.  My second day I ate at The Olive Tree restaurant (also included) as I had an early flight and the Club wasn’t open.  It is nearly identical food in the restaurant as in the Club but the Club is quieter.

In the evening there was one hot dish and a number of cool dishes and a large assortment of desserts.  Complimentary alcohol is also served.

The patio would be a nice place for breakfast during the cooler months.

Views from the Club are of the marina.

There are three pools (in addition to the spa pool I discuss below).  The main pool is the Infinity Pool facing the marina.

In addition there are two family pools along the side of the resort.

The private beach is across a bridge.  There is a large beach space with various lounger options.  The water itself has a lot of activities.

Perhaps my favorite part of the property is the Aqua Spa area.

Guests with Club Access and those in Suites get complimentary access to the spa facilities, as would anyone paying for a treatment in the spa.  All guests get access to the gym.

Down one floor from the gym is the spa.  It is gender separated.  The mens (and assume the women’s is similar) has lockers, showers, Turkish Hammams, steam rooms, a relaxation lounge, hot tubs and cold plunge pools.

The real star is outside.  There is a private spa pool that is wonderfully landscaped.  The pool is set up as a series of canals rather than a large open pool.  Open air cabanas are along the side in about 3 inches of water.  The spa pool was extremely peaceful and a nice getaway compared to other pools that were crowded.

It is one of the most beautiful pools I’ve ever seen and all the more fantastic because of the exclusivity and serene environment.

There are a number of restaurants on property.  During my visit the main restaurant, The Olive Tree, was only open for breakfast. If you wanted to eat indoors for lunch, your only option was the Vista Lounge off the lobby.  I ate lunch there and the food was fantastic though on the expensive side.

Outside by the main pool is Cascades, an open air Italian restaurant.

La Plage is the beach club restaurant open until sunset.  It is also open air.  There is also a steak house called Red that I believe was only open for dinner.

The service was top notch.  Much better than the service I experienced a similar size resort on the Dead Sea.  Globalists are treated extremely well and the Regency Club is fantastic.

If visiting Jordan, I would recommend ending your trip in Aqaba at the Hyatt Regency for some relaxation (especially if you rented a car and need to relax after the crazy driving and roads).  If you are a diver, I would imagine that it would be worth a trip just to Aqaba.

I wish more Hyatt properties were similar to the Hyatt Regency Aqaba.