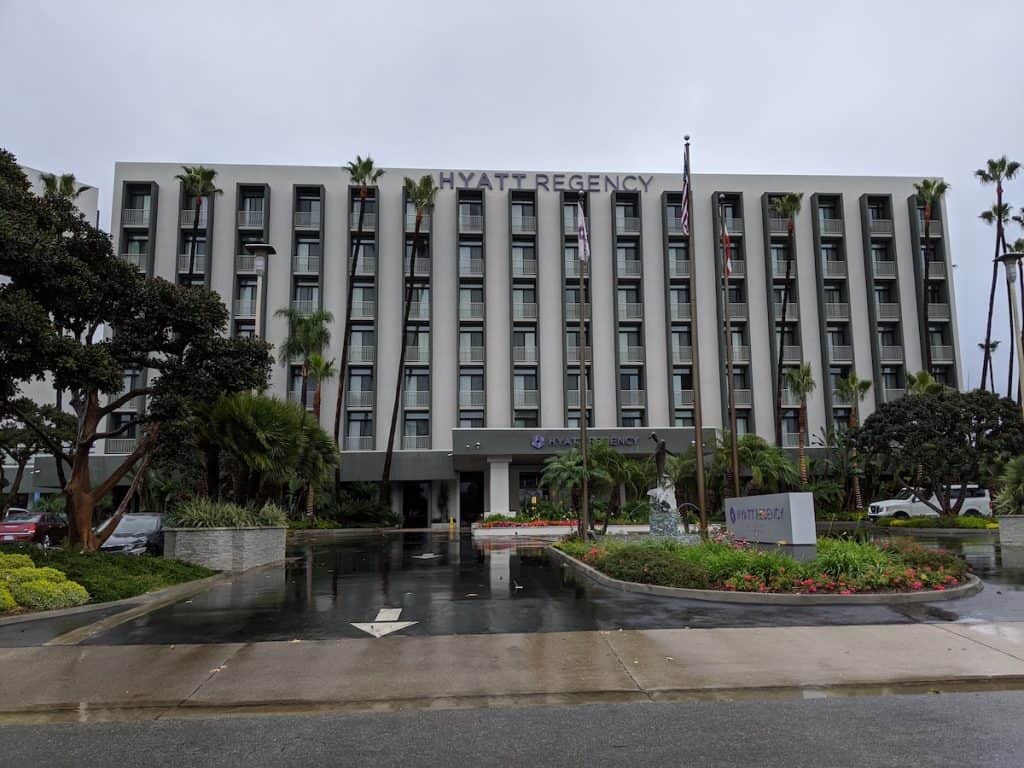 The Hyatt Regency John Wayne Airport Newport Beach Review (doesn’t that just roll off the tongue?) is located in an office park location near the Santa Ana Orange Count (SNA) airport.  I stayed for one night before Thanksgiving after a late flight arrival and prior to moving on to a visit to Disney.

The hotel is located just south of the SNA airport.  There isn’t really anything within walking distance, so if you are taking in the complimentary shuttle from the airport be aware that there isn’t much nearby.

I rented a car and there is free parking at the hotel which is a bonus. 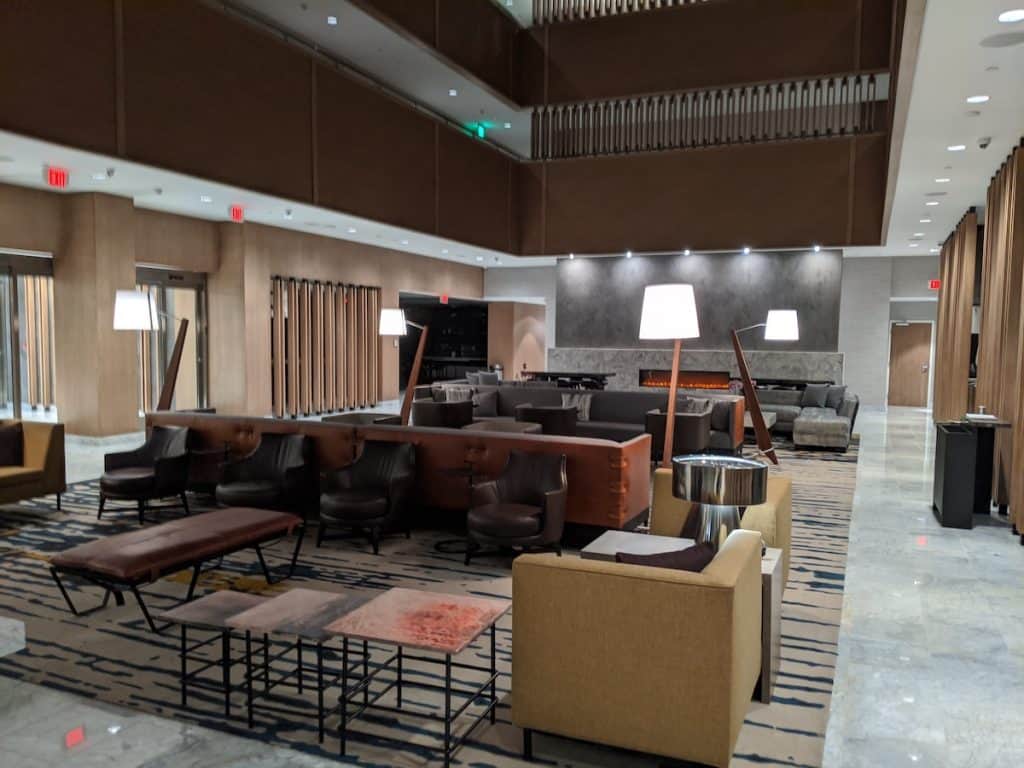 I arrived late at night and was greeted by a friendly desk agent and her trainee.  I was upgraded (as an Explorist) to a King Bed Deluxe Room on the top floor of the main tower.  I was told I had a 2:00pm check out as Explorist without having to ask.

There are two towers, the main tower is an atrium style building with rooms on floors 2-7.  On the ground floor is the check in desk, lobby and restaurant.  There are only two elevators for the main building and one was broken during my stay which meant longer than usual wait times for the elevator. 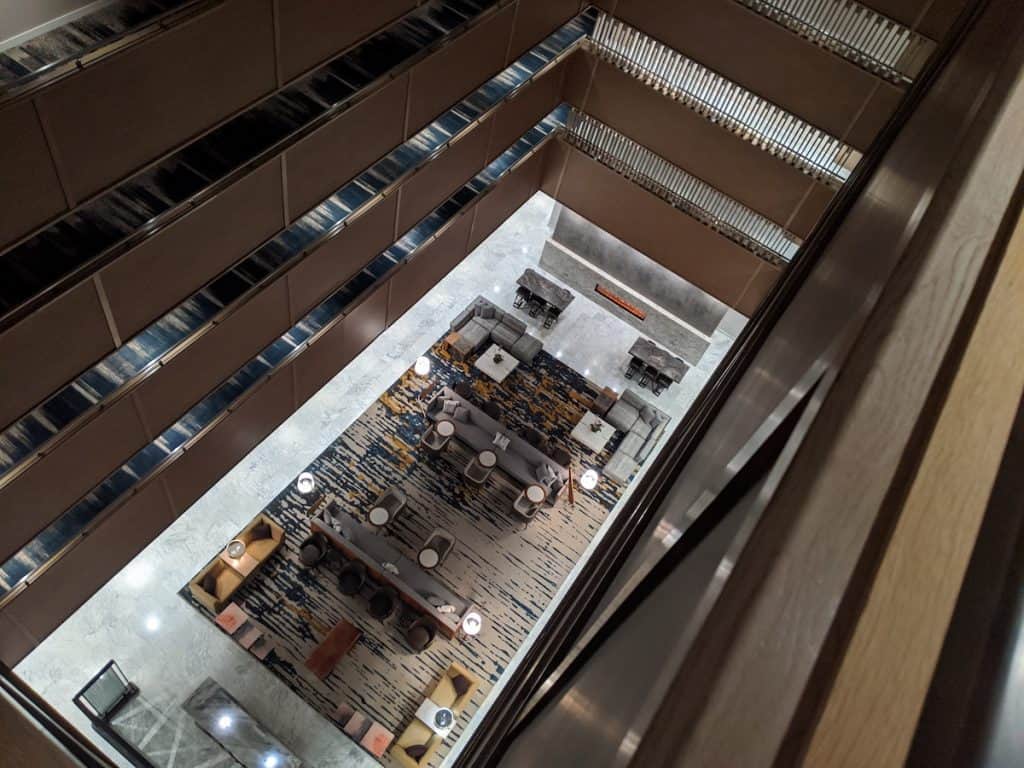 I was assigned a King Bed Deluxe Room (753) located on the top floor on the end.  The Deluxe rooms are just slightly larger than the standard rooms. 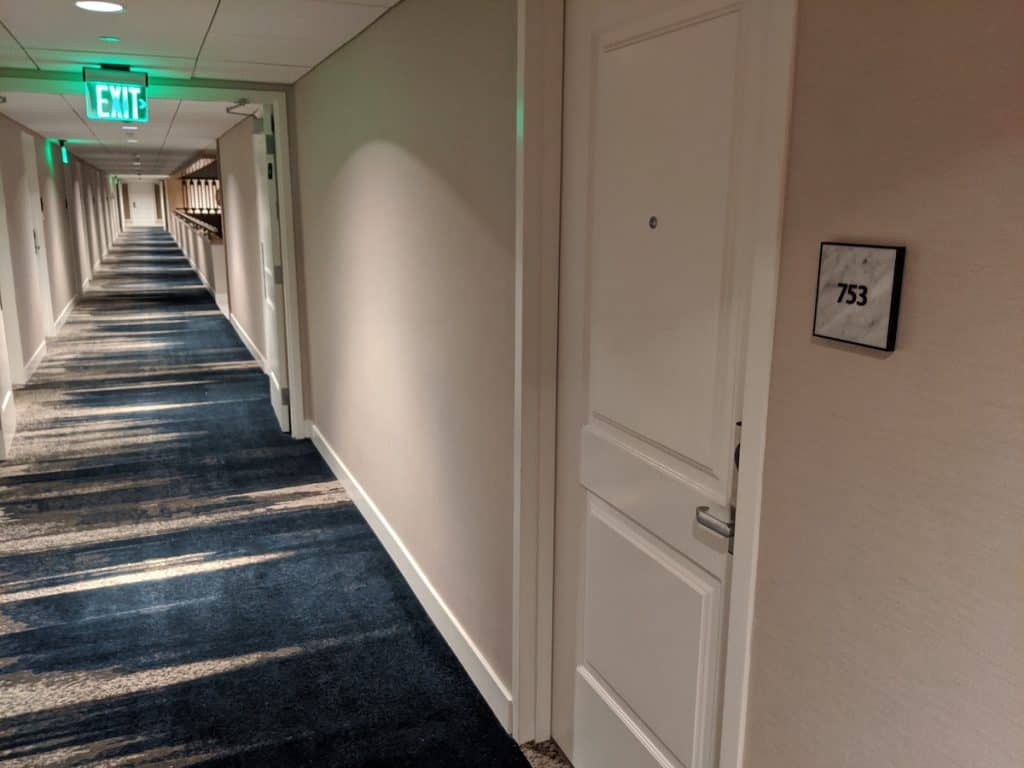 As you enter there is a tiled entry with the bathroom straight ahead and open closet to the left.  The closet has a pair of slippers and robe as well as a safe. 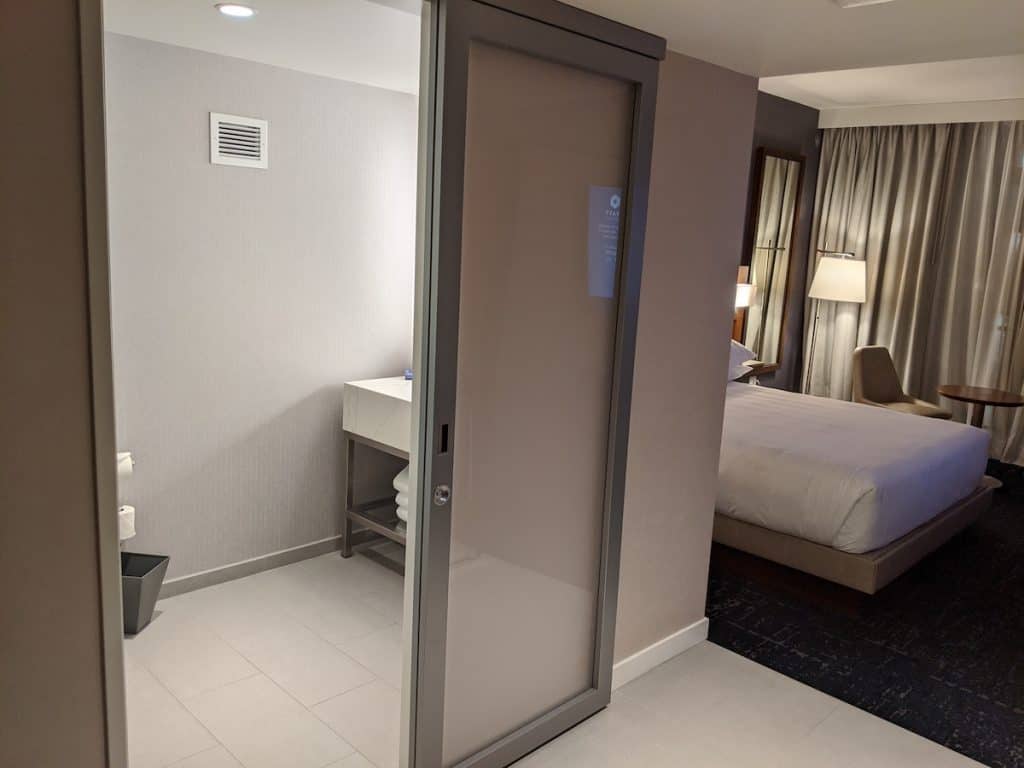 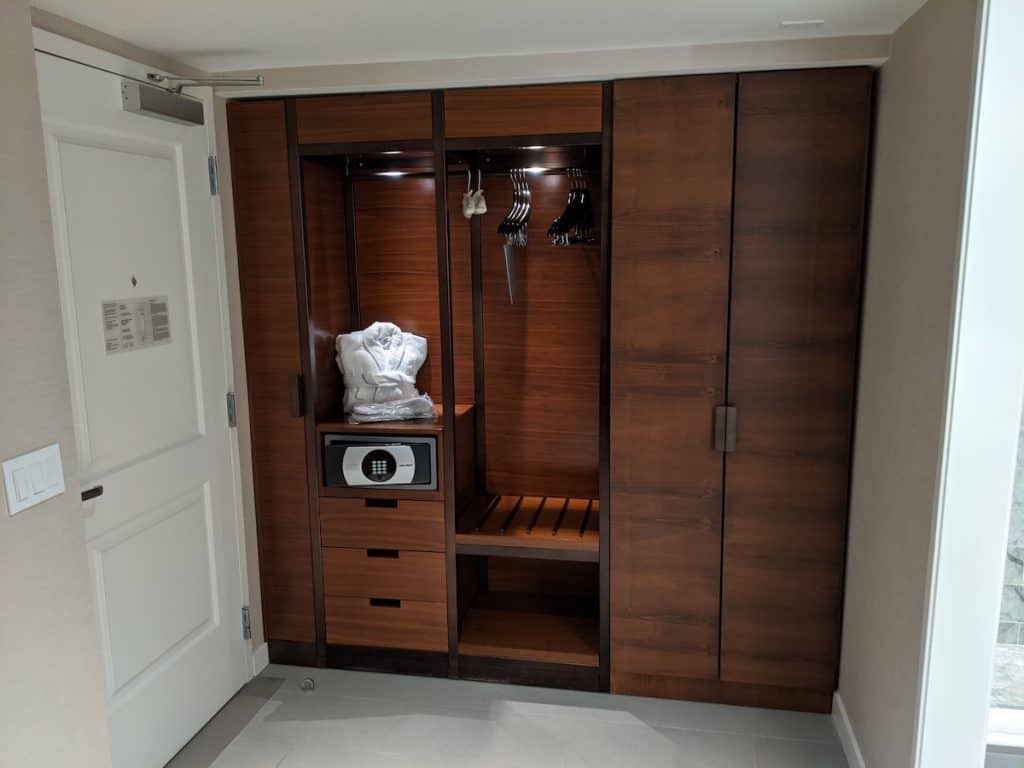 To the right as you enter is a small island with coffee maker and empty mini fridge.  I was provided two bottles of water.  A personalized letter and some treats were also provided for me. 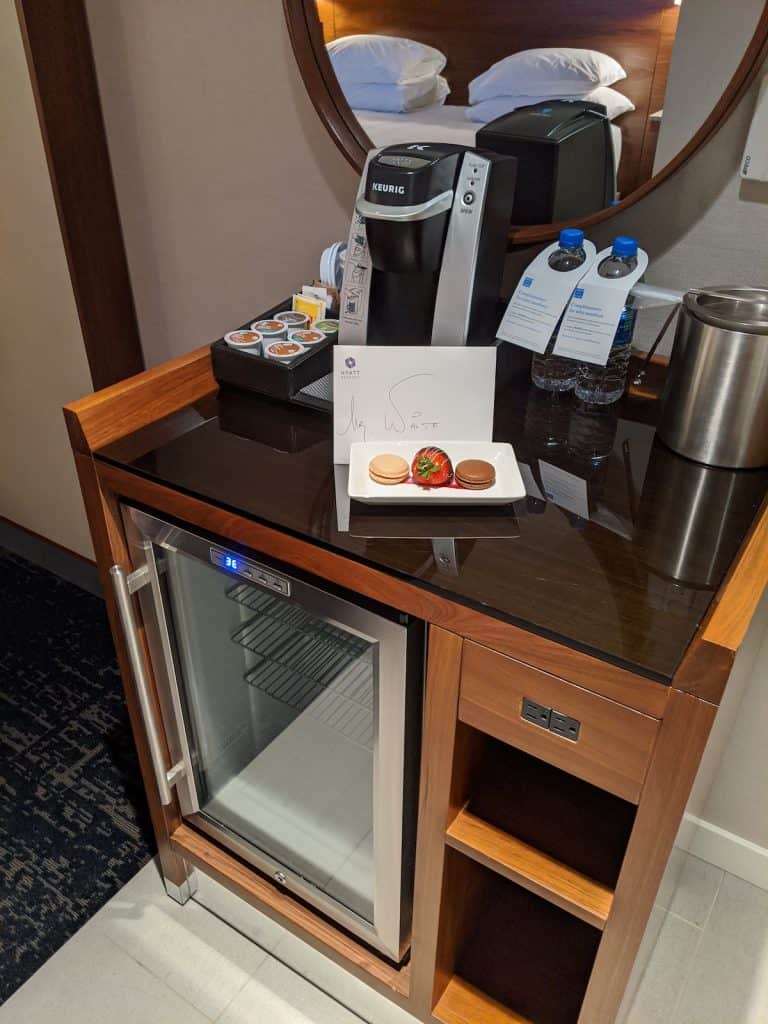 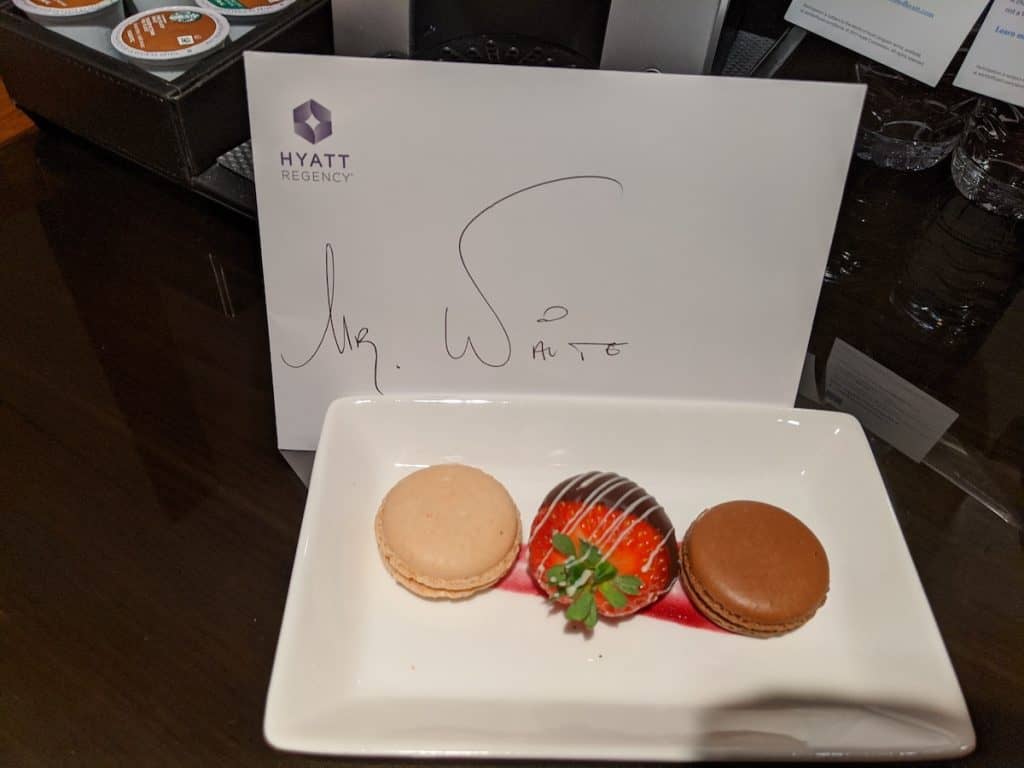 While it is nice to have a mini fridge, a bright LED temperature display lit up the entire room.  I had to find something to put over it while I slept 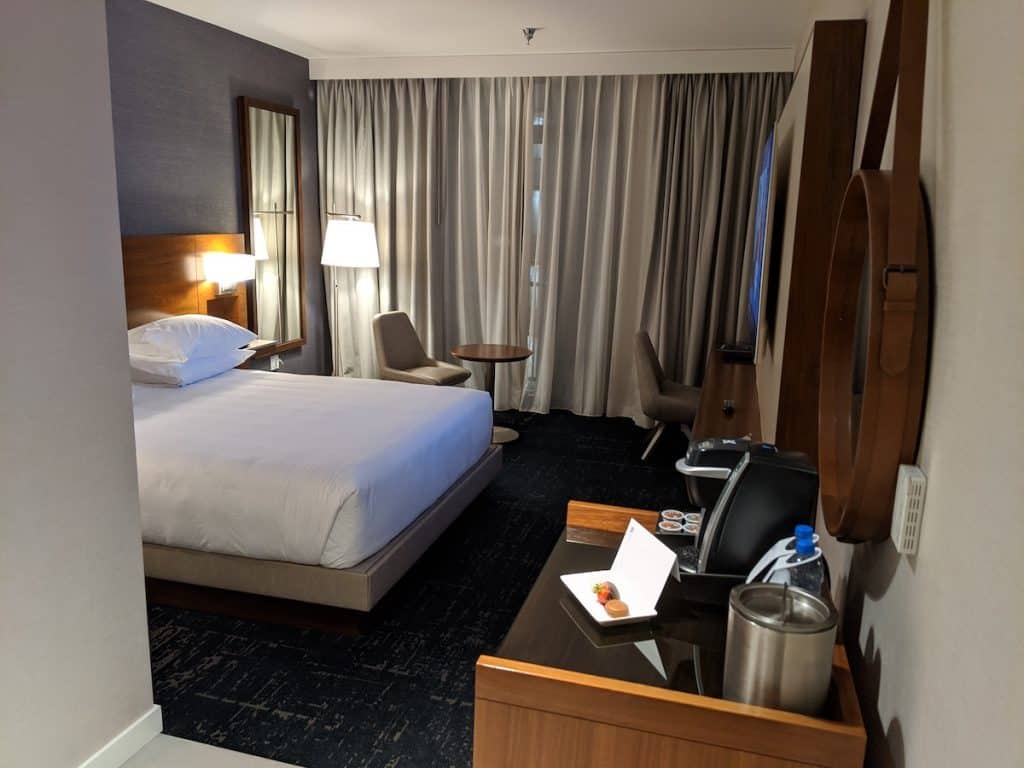 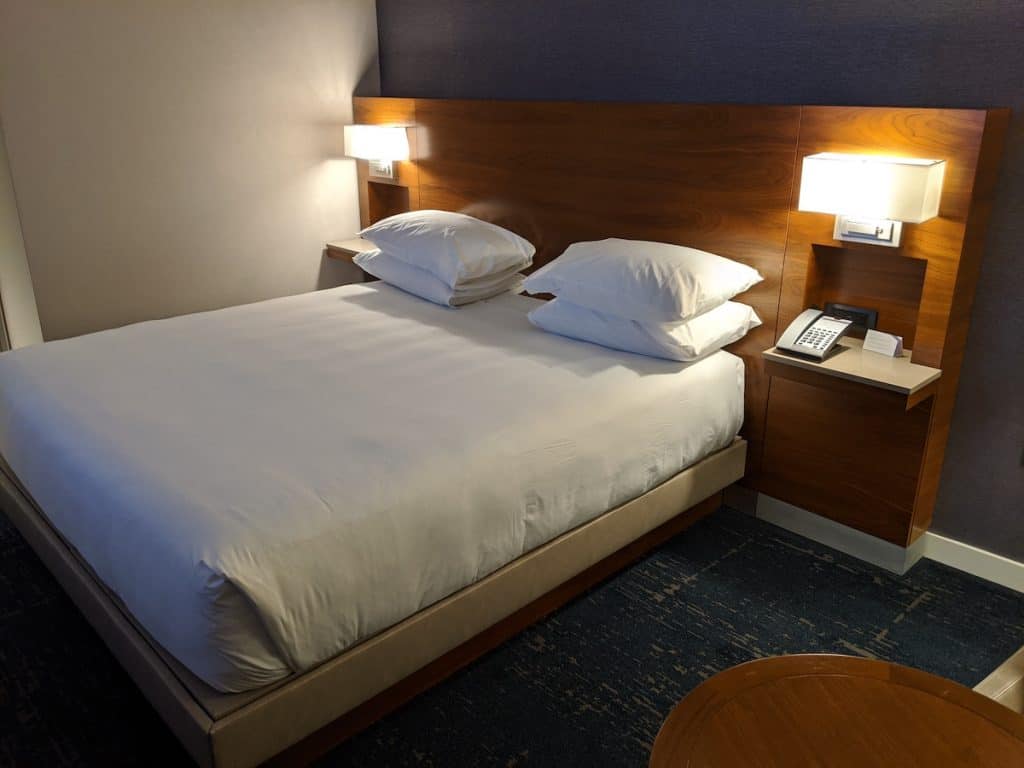 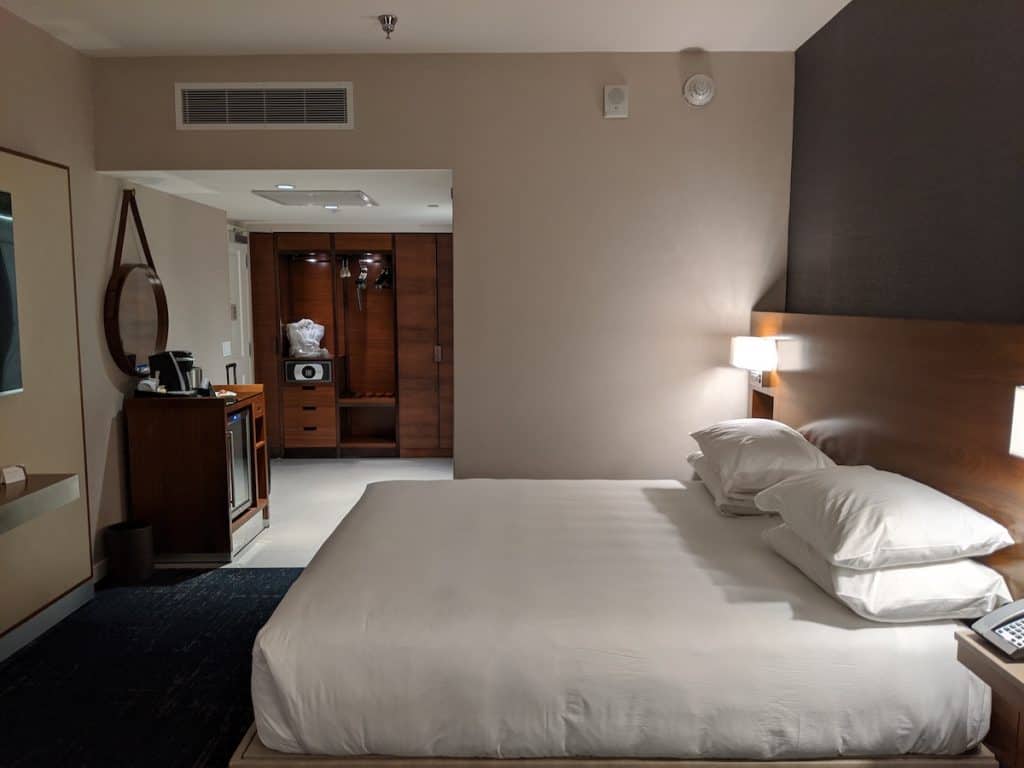 The bed faces a large wall mounted TV and small desk/shelf.  Plenty of outlets and USB plugs are available throughout the room. 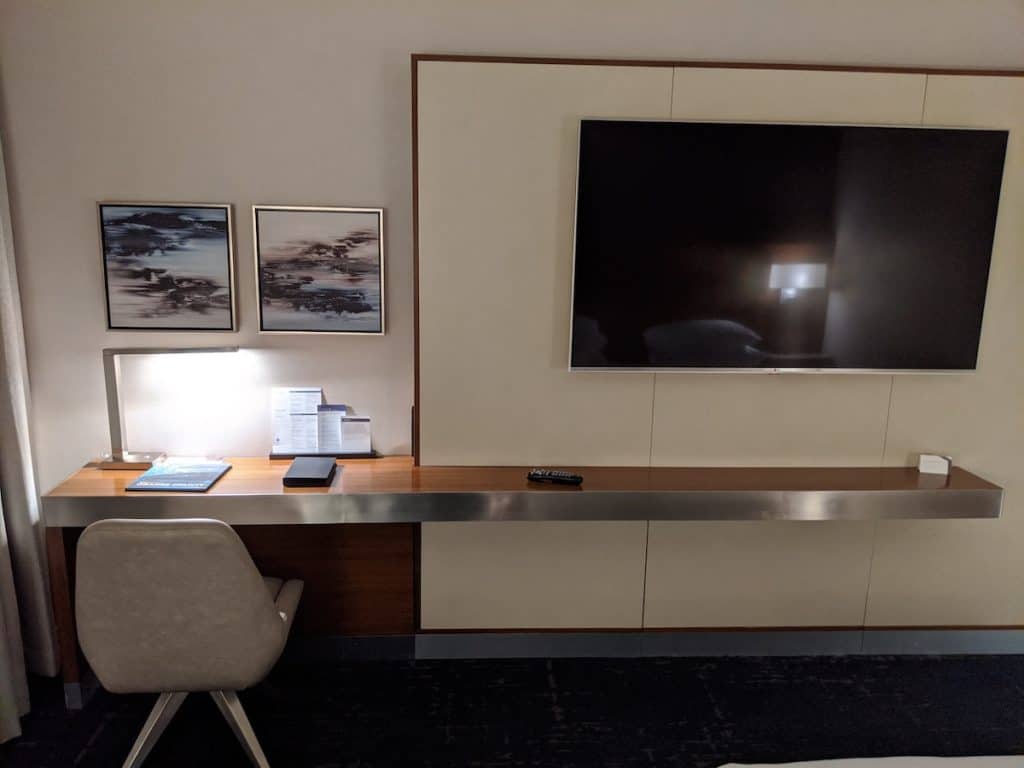 A small table and chair is in front of the sliding glass door that opens to a small patio. 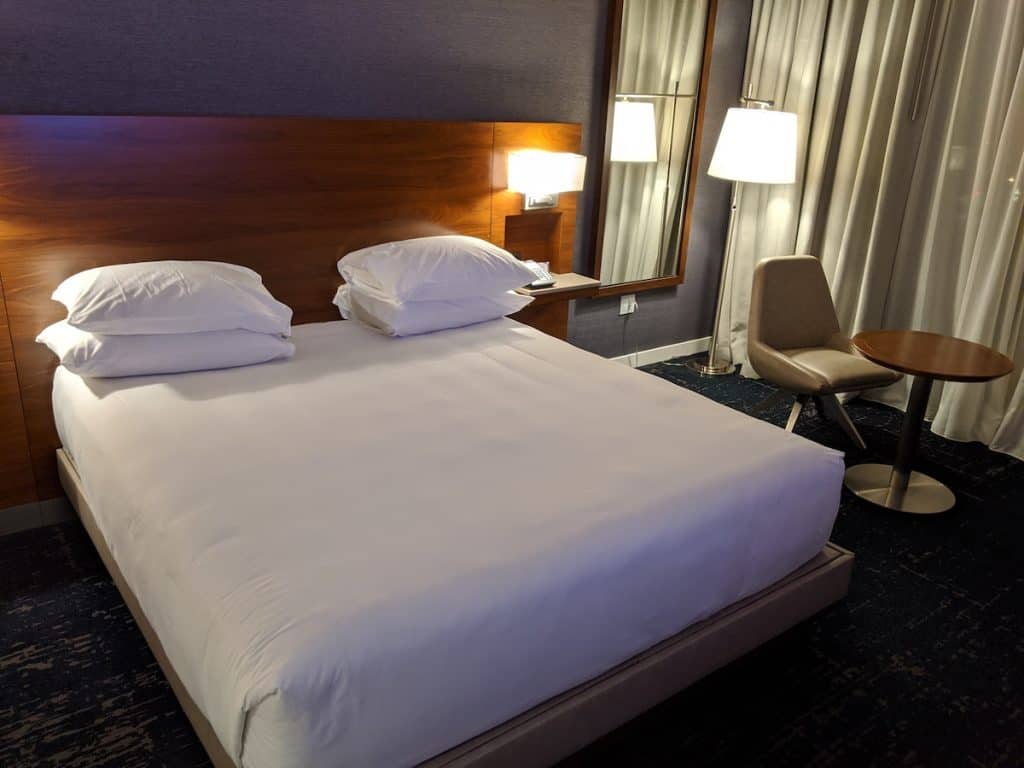 Like most Regency properties, the room is comfortable and very functional.

One note is that the entry lights and bathroom lights are motion activated.  I was told at check in to pull out a little tab under the switch at night in order to deactivate the motion sensor.  Some people might find this a challenge.

As is so common in modern hotel rooms, a sliding frosted glass barn door closes off the bathroom.  I find that while these look nice, they offer less privacy than a standard bathroom door.

The bathroom is bright and clean.  The shower is enclosed with a glass sliding door.  Both a standard shower head and handheld wand are convenient. 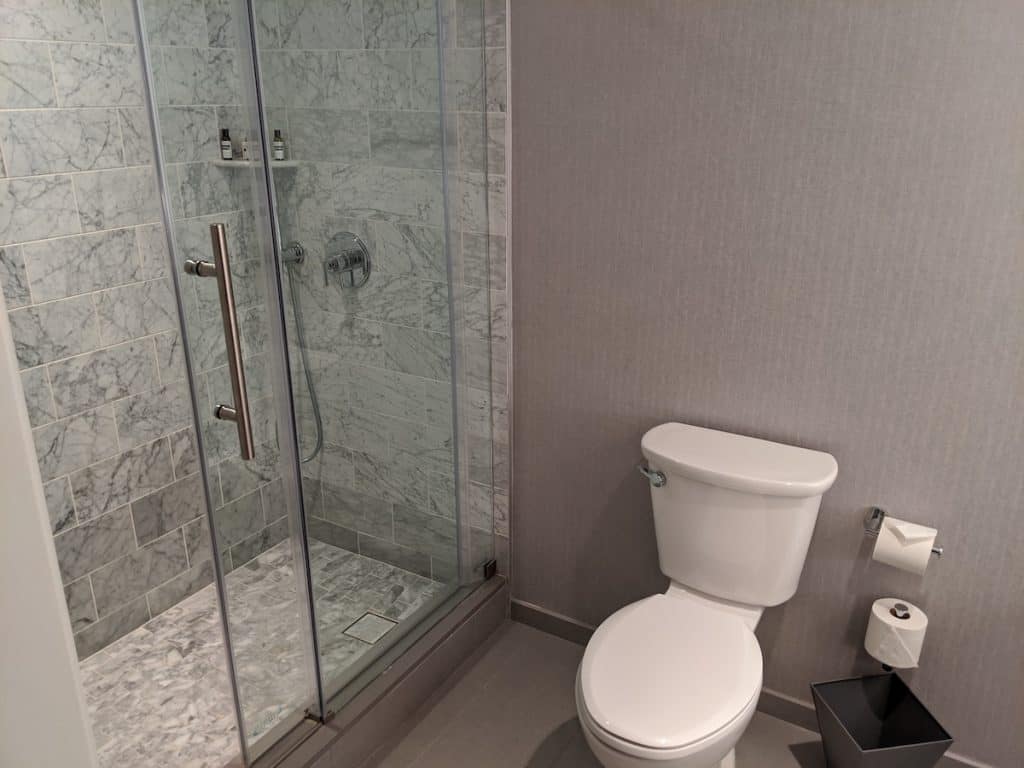 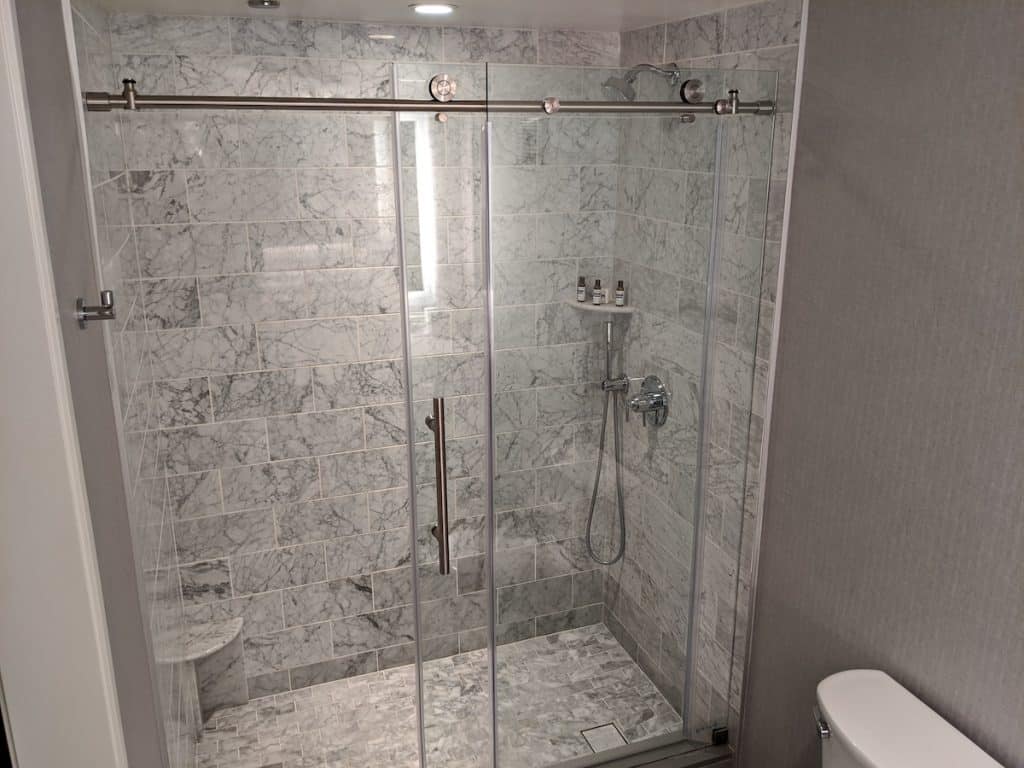 Opposite the shower is the single vanity.  The mirror is back lit and has a clock built in but mine seemed to be broken. 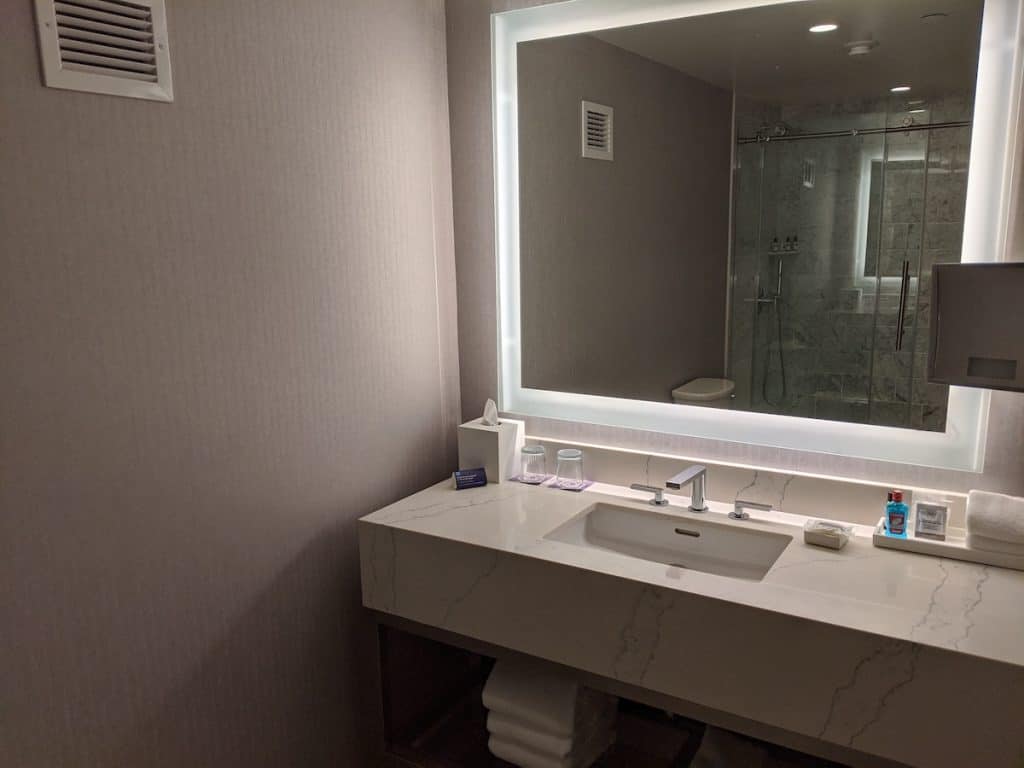 The bath amenities are Pharmacopia and (as of November 2019) still single use.  A bottle of mouth was is also provided. 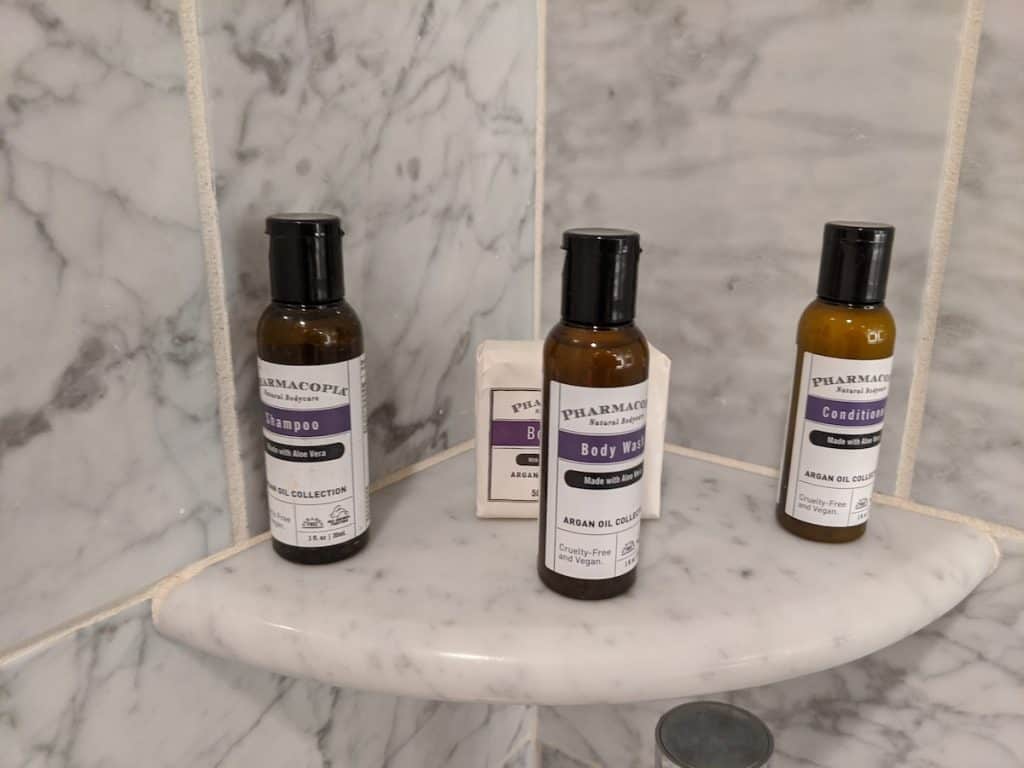 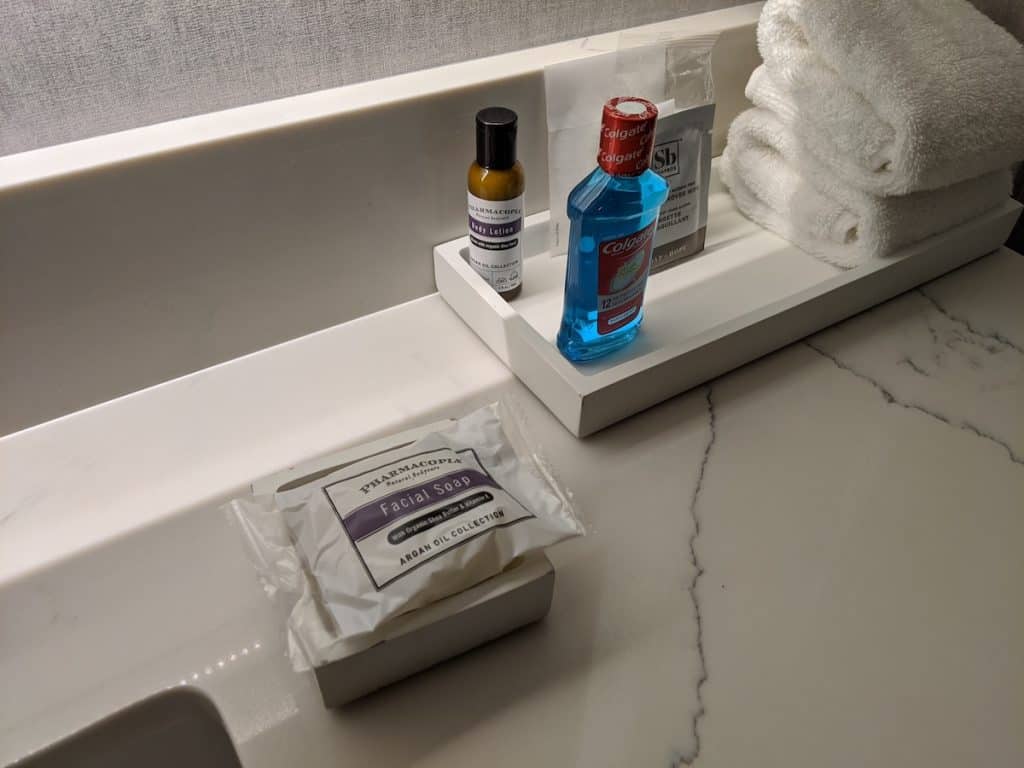 This being Southern California, there is an outdoor pool.  It rained during my visit but it looked like a nice enough area for a dip in nice weather. 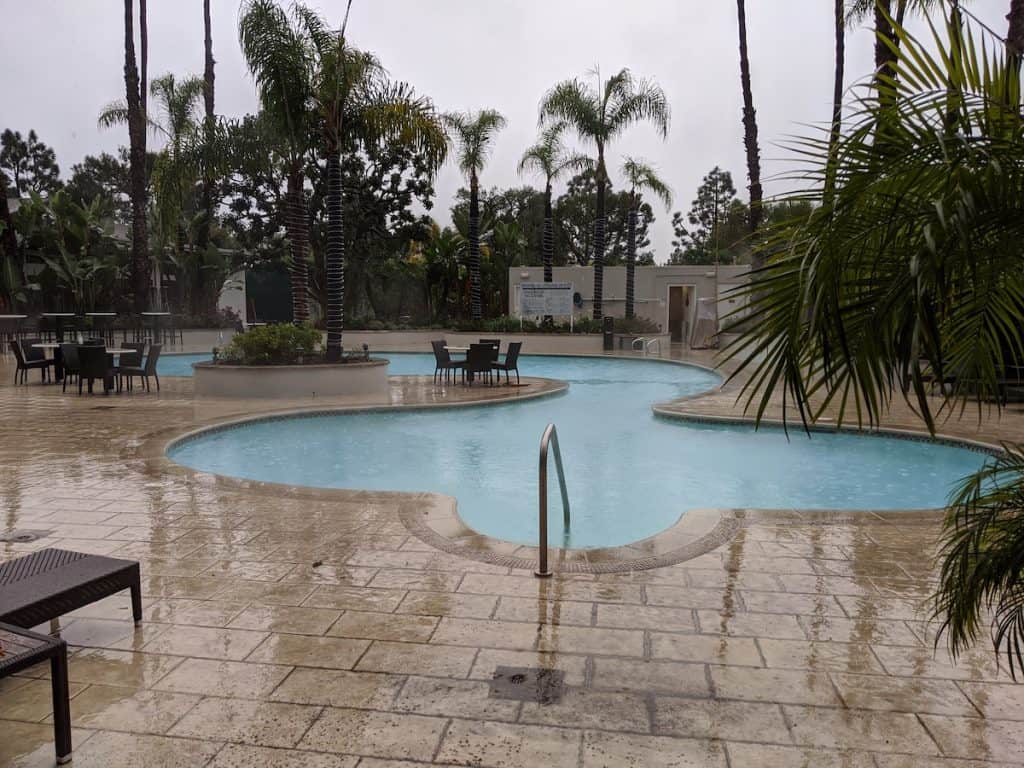 Overall the Hyatt Regency John Wayne Airport Newport Beach is a fine choice for an airport hotel.  The rates tend to be on the low side for the LA/Orange County area.  The building itself is old but the renovations are clearly recent.  The property formerly was the Carlton Hotel Newport Beach but reopened after complete renovation in April 2018.  The rooms are modern and functional.  I wouldn’t hesitate to stay again if I needed a bargain night near the airport. 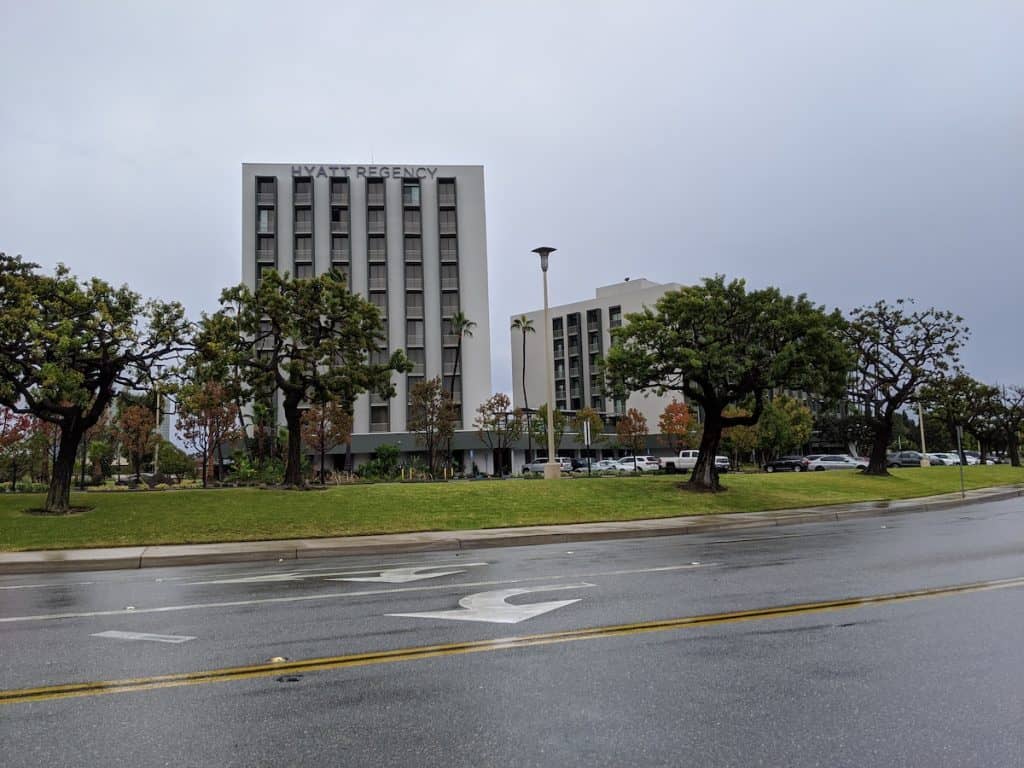