As part of my crazy, around the world trip I had to get from Nantes, France to Antwerp, Belgium.  With the fast trains in France and Belgium, I thought taking the train would be a more comfortable, cheaper, and ultimately easier option than trying to route a flight for the leg of my journey.

From what I can tell, the official ticketing website for the TGV is oui.sncf.  The website says:

OUI.sncf is the official European distribution channel of the French railways (SNCF) for online sales of high-speed and conventional rail travel throughout France and Europe: plan your journeys, book your train tickets and get inspired by our travel guides!

The official SNCF (which runs the TGV) redirects to the Oui website.

I entered my starting city as Nantes and my destination as Antwerp.  It showed me a route that had Nantes-Paris on the TGV and then Paris-Antwerp on Thalys.  I had 1 hour 9 minutes to connect as the TGV arrived to Paris-Montparnasse and the Thalys train left from Paris-Nord. 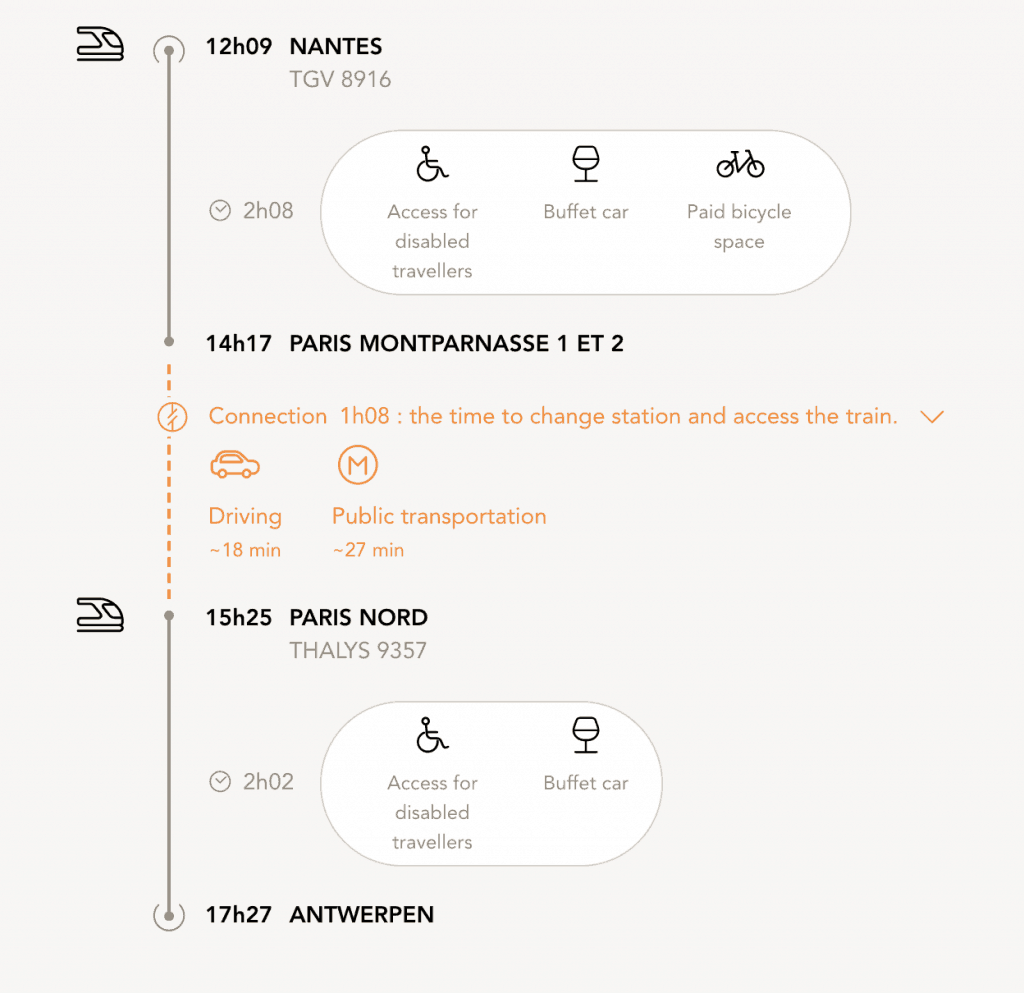 A first class ticket was only a bit more expensive so I purchased that.

After a close call I got on the train in Nantes and had no problem.  However, half way through the trip the conductor came on the intercom to say that the train would be delayed about 20 minutes in to Paris.  I still had 45 minutes, so I didn’t think it would be an issue.  However I believe the actual time arriving at the platform was a bit later than the predicted delay.

Once we got in to Paris I went transferred as quickly as I could with no problems.  As I arrived at the platform for the train to Antwerp, they were just pulling across the gate.  The agent at the platform informed me that they had just closed the gate and no one else could get on.  The train was sitting there and there were clearly still people boarding.  She said I would have to wait and they would get me on the next next train — two hours later.

Frustrated, I watched as the train sat at the platform for another 10 minutes.  I asked a few times if she was sure I couldn’t get on, and she apologetically said they wouldn’t let me on.

Finally the train pulled away and I waited for the platform manager to come and get me re-ticketed.  He arrived and said nothing to me.  Took my paper, wrote out a little coupon and handed it back.  Literally said nothing.

I asked him what I was supposed to do next.  He told me to go to the Thalys Lounge and walked away.  Fortunately the nice staff member explained where the Lounge was, that they would take care of me.

I walked over with my original ticket and the coupon the manager gave me.

I showed her my ticket and explained the situation.  I also asked if there would be any compensation since I would have to wait two hours, perhaps a snack or meal.

She said “I don’t understand”.  I explained again, that I would be getting into Antwerp late, and was curious if there would be some sort of compensation for the delay.

The staff member looked at me, then held up the coupon the manager had written for me.  “This is a gift from Thalys!”  I didn’t understand and I asked if she meant that the coupon was the compensation.

“No.  I don’t understand why you think you deserve any compensation.  Thalys is giving you a gift of getting on another train.  They don’t have to do that.”

I explained, trying to remain calm, that my train had been delayed getting in to Paris, which is why I had now missed my train.  Both tickets were on the same itinerary, purchased through the official means.

She responded “You missing your train is not Thalys’ fault”.

Confused, I asked “Who’s fault is it?”

I again explained the situation that the first leg of my itinerary had been delayed beyond my control.  Trying to understand her response, I came to the conclusion that Thalys and Ouf/SNCF were separate entities.  Maybe it would be like if I purchased a ticket from the US to Paris and the first leg was on Delta, the second leg was on AirFrance.  Still I had purchased the itinerary at one time from Ouf.

After some conversation, she finally responded that perhaps it was the fault of Ouf (SNCF) and that I would need to go talk to them.  I asked for the coupon from the manager so I could show it to them and she tore it up in front of me.  Apparently she didn’t think I deserved the “gift” any more.

Back at the Ouf/SNCF office in the train station, the first person I spoke with told me that there was nothing to do and I would need to purchase a new ticket.  I again explained that their company had sold me the tickets, their train had been delayed, which caused me to miss my train.

He said I would need to contact the website customer service.  In the mean time, it would be €200 for the new ticket.  Fortunately, someone I believe was an SNCF manager happened to be refilling the fan with ice (yes, that’s what he was doing) overheard and stepped in.  He made some calls and finally walked me back over to the Thalys office.

He was able to get me a new ticket on the next train, 2 hours later than my first train.  I didn’t bring up the compensation again, I was just happy to have a ticket!

However, he told me, they couldn’t assign a seat yet.  So I should arrive 30 minutes before departure to get my seat.

I made sure to be at the platform 40 minutes early.  As soon as they opened the gates, I went in to the First Class car.  The staff member told me to head down to the other end of the train where there was more room.

I laughed and got on.  I sat in the jump seat as the rest of the train loaded.  A few minutes before departure, I wandered around the car and saw an empty seat and sat down.  No one came for the seat and the train took off.

I did a little research and found the following about Rail Passenger Rights in the EU:

Your train was delayed

If you are informed that your train will arrive at your final destination with a delay of at least 1 hour, you have the right to:

If you decide to continue your journey as planned or to accept alternative transport to your destination, you may be entitled to compensation.

You will not receive compensation if:

According to this, I may be entitled to at least 25% of the ticket price (I was almost exactly delayed 2 hours so maybe 50%).  However I have also heard that this only applies for a single train trip — not including connections.

The Railteam, an association of various rail companies in Europe including Thalys and TGV, as a policy called “Hop on the next available train” (HOTNAT).  I don’t know if this is a binding agreement within the contract of carriage of the train ticket, but for what it is worth, it basically spells out what I ended up receiving in the end:

Hop on the next available train » (HOTNAT) allows travelers to take the next high-speed service leaving from the same station as originally planned when a delay on or cancellation of a preceding Railteam member’s high-speed service prevents them from making their originally-planned connection.* This service is free of charge and is subject to the following conditions : the connection that was missed must be between two high-speed trains of the Railteam Alliance. HOTNAT only applies at the station at which the passenger originally planned to change trains and in cases of train delays and train cancellations. The approval of HOTNAT is subject to the available capacity on board each train. Seats are not guaranteed.

Oui has their own compensation terms at their website.  However, it doesn’t make it clear what happens if a delay causes you to miss your connecting train.

My take away is always give your self PLENTY of time if connecting by train if you are purchasing a reserved seat.  A lot of trains in Europe seem to sell you a ticket for a route on a specific date, but then you hop on which ever train comes.  This works better as if there is a delay, it is no big deal, you just get the next one.

However, at least with Thalys, it seems that you are at the mercy of their rude staff to get to your destination.

TLDR: Purchased a First Class train ticket with two segments.  First train delay caused me to miss second train.  Train company told me it was my fault.  Got put on a train 2 hours later and told to sit on a jump seat.

Is this a glitch in the Oui system where you aren’t guaranteed to get to your final destination?  If one train is late and it impacts your other legs, are you just out of luck if the staff won’t help you?  Even if the ticket is sold as one itinerary?  You definitely aren’t guaranteed a seat on any train.  And why are the Thalys staff so rude?