Editor Note: This is the first post by a Single Flyer guest writer!  Thank you Lauren for this contribution.

I’ve been encouraging my mom to catch up to my number of US states visited, so we planned a trip to Indiana and Kentucky, to snag her two more states. We needed to use last year’s Alaska Companion Fare before the expiration date, so we booked the airfare from Seattle to Indianapolis last August. By the time spring rolled around, I also needed to use my annual IHG free night certificate before it expired. We chose the Crowne Plaza Indianapolis Downtown based on its central location and convenient walking distance to the places we wanted to see. 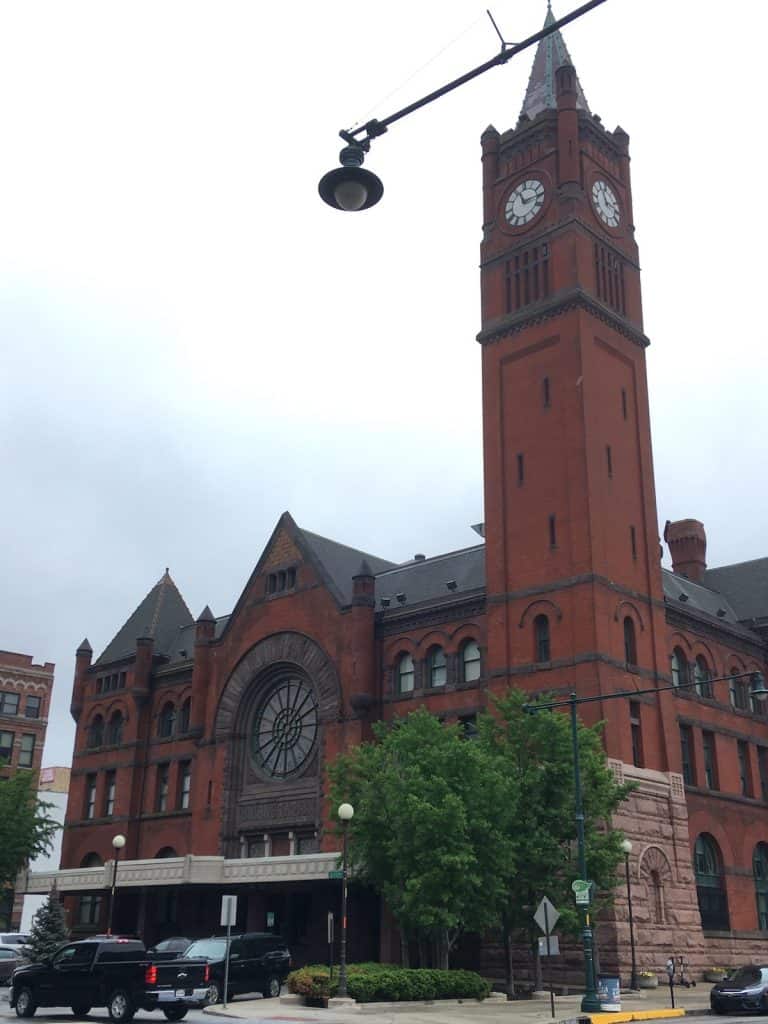 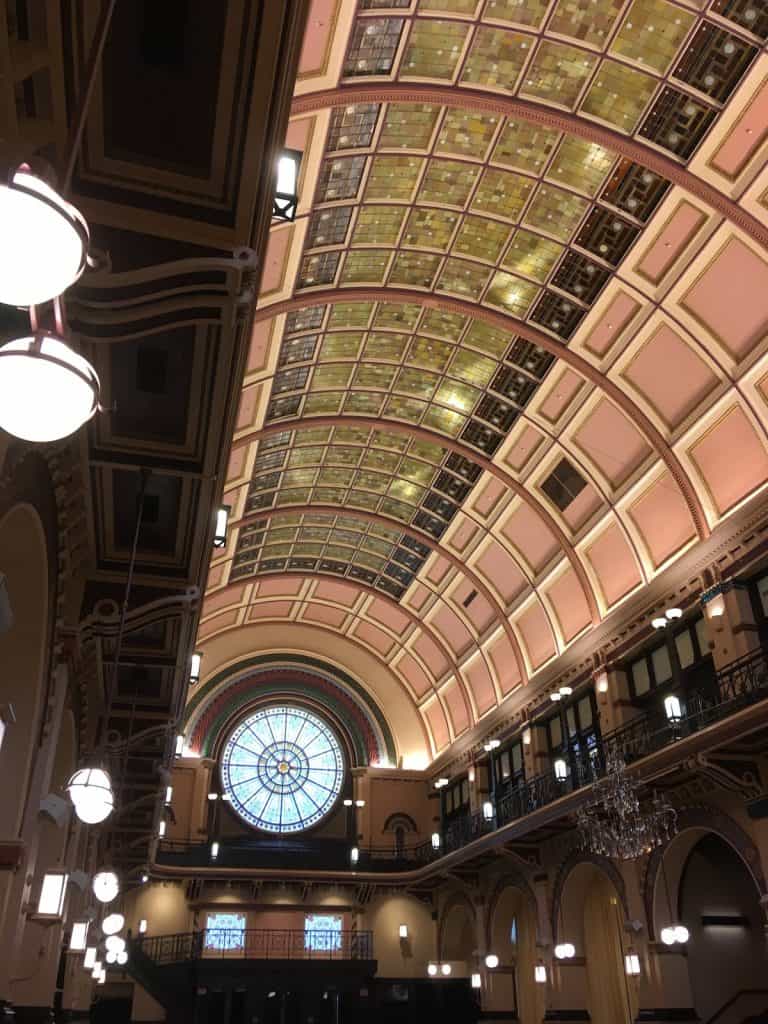 As it turned out, this property has quite a bit more character than your typical Crowne Plaza! The hotel is located adjacent to historic Union Station, in the building that formerly housed the train shed. Union Station was added to the National Register of Historic Places in 1982, and after a renovation, the main station area is now used as the event/conference center space attached to the hotel. But even on the hotel side, the renovation preserved the structure of the original building. Exposed beams are visible everywhere in the public areas. According to the hotel, only three of the original iron beams were cut in the construction process! 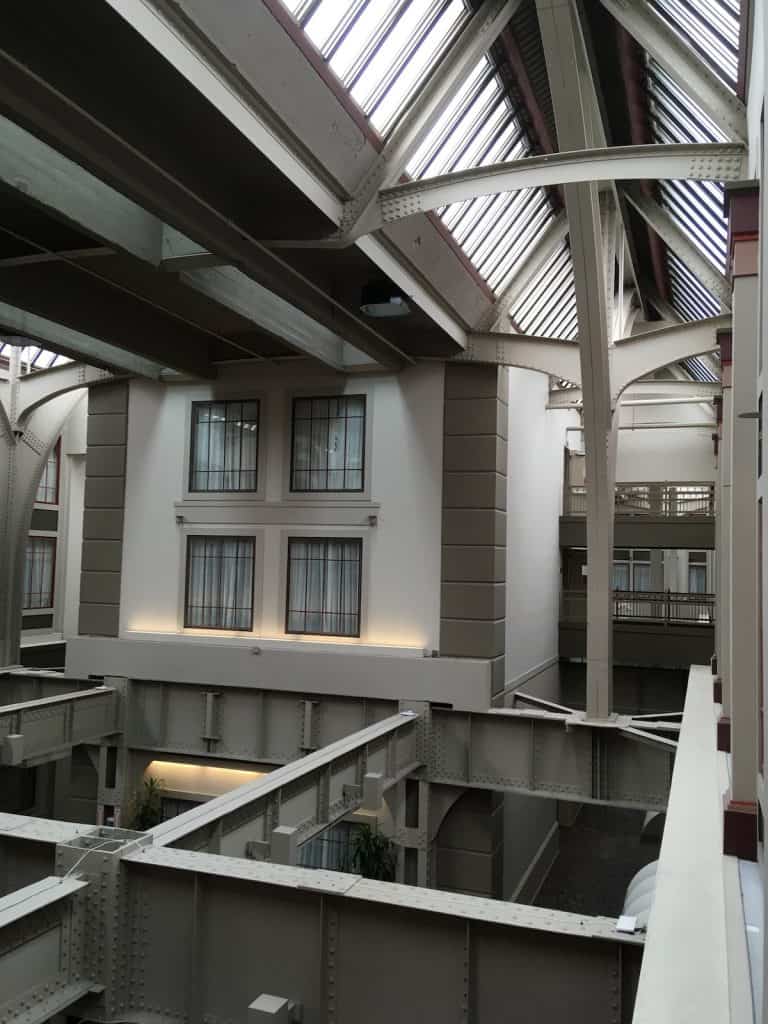 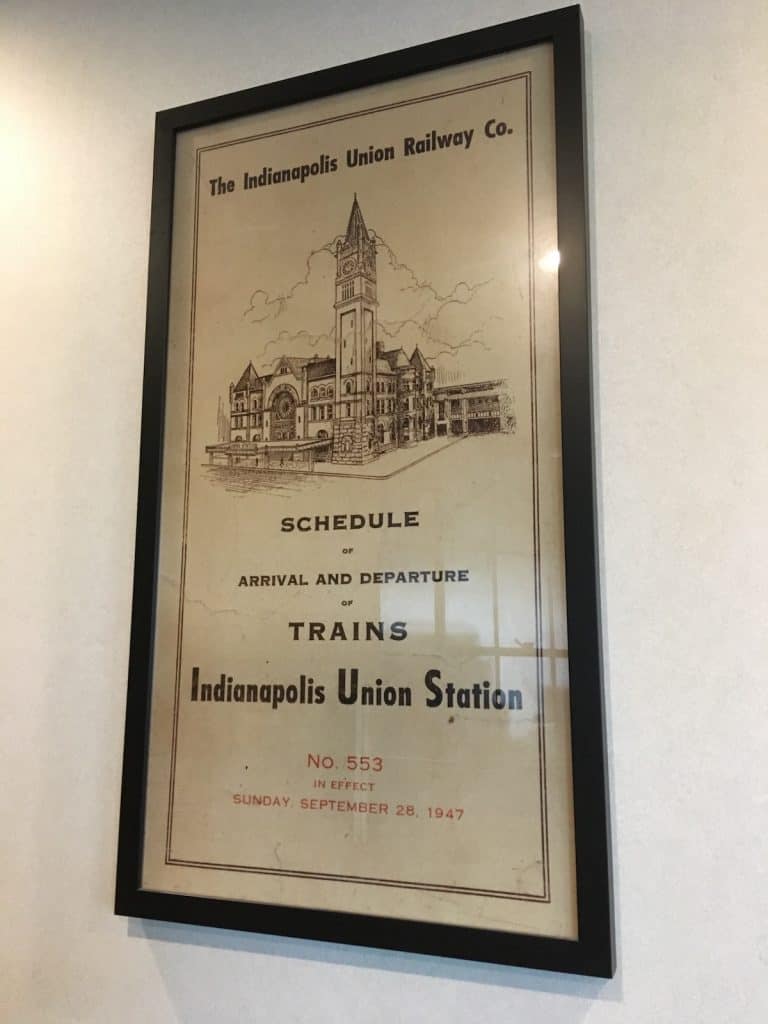 The hotel is also full of what they call “ghost sculptures”, white figures meant to represent the stories of the individuals who traveled through the station in its heyday. 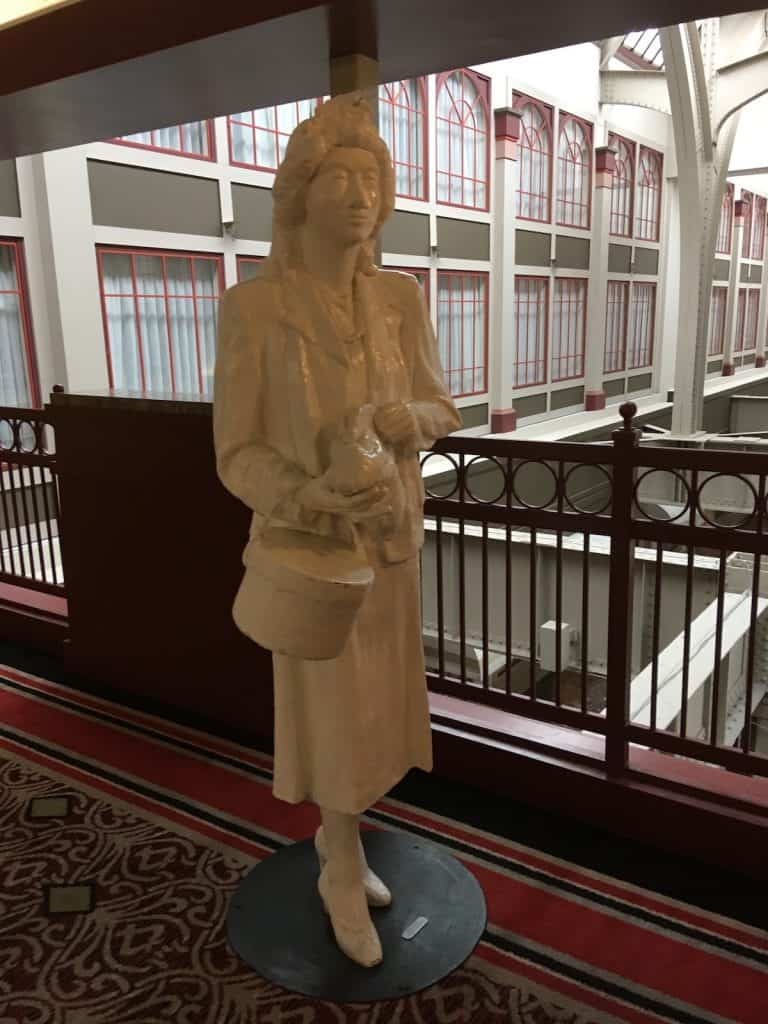 There were also smaller decorative touches that I enjoyed, like stained glass ceilings in the elevators. 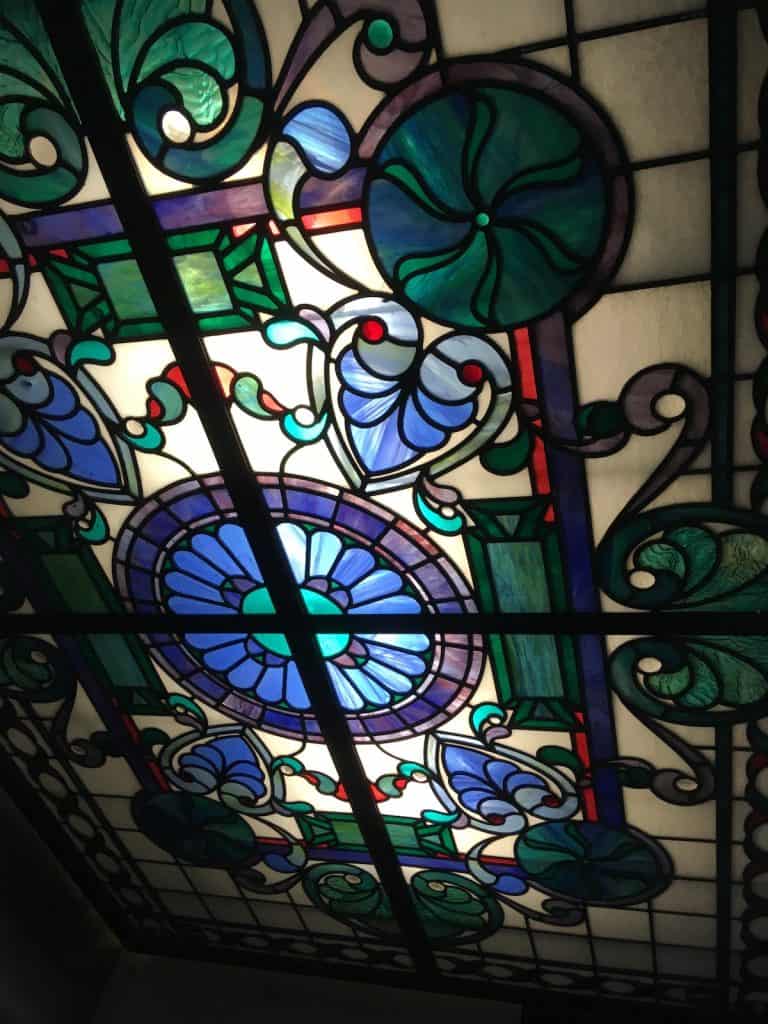 We stayed 2 nights: the first night (Saturday), was a typical 2 Queen Beds non-smoking room, which was free thanks to the IHG certificate. Sunday afternoon, we checked into our second room: a Pullman train car! The hotel offers 26 suites in 13 authentic 1920s Pullman train cars, with an option of either two Double beds or one King. You may be wondering how they got 13 train cars into a hotel. The answer is: they didn’t. The train cars are resting on the original tracks and the hotel was built around them. According to the hotel, there is “no other hotel in the world that has train cars inside the physical structure of the hotel.” 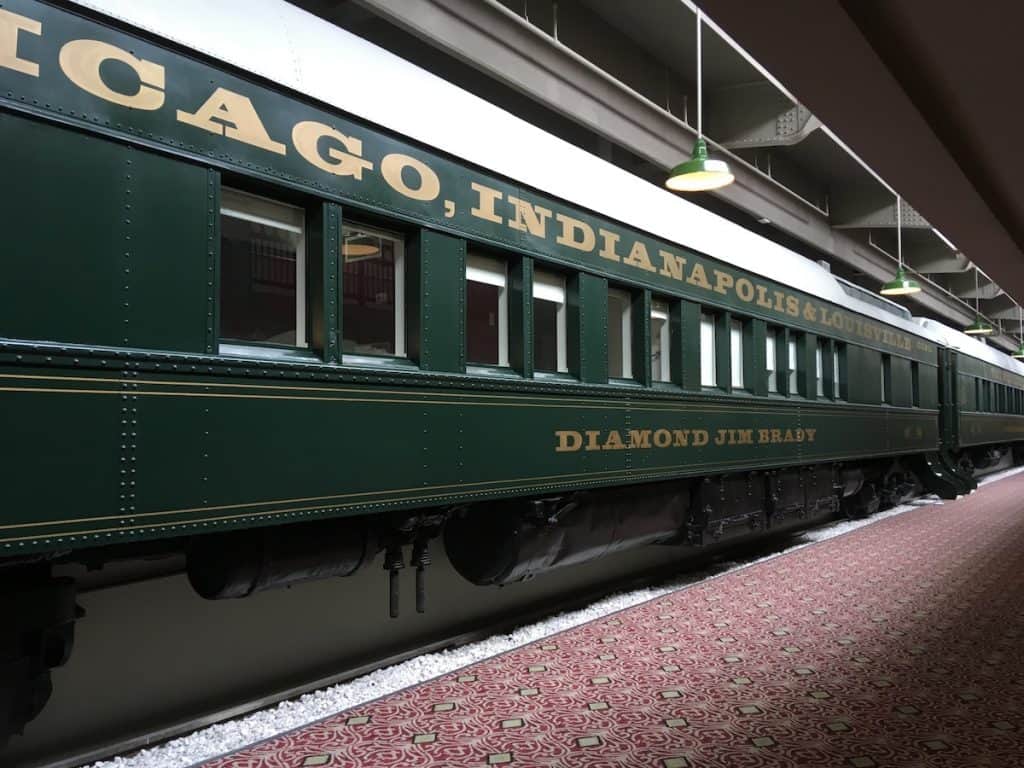 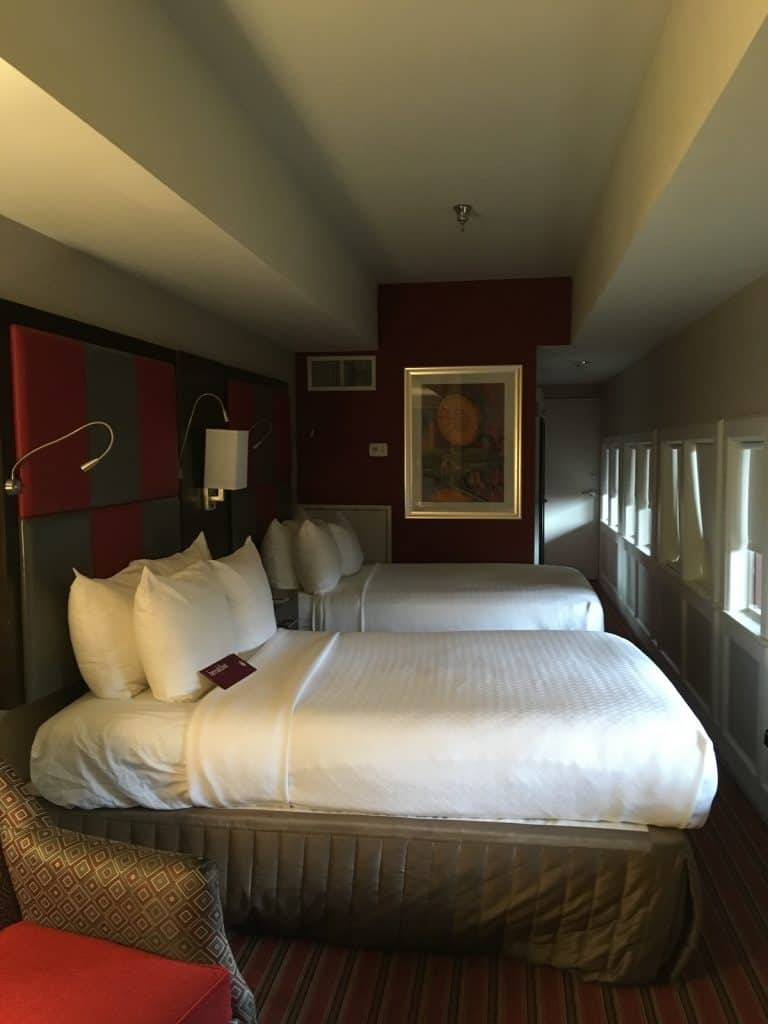 But I don’t want train enthusiasts to get their hopes up TOO much! The inside of the train cars are not furnished like a 1920s Pullman car. The beds and furniture were identical to those in the regular room that we stayed in on the first night. (That being said, the beds were extremely comfortable.) Also, I think it’s a bit generous to call these “suites”, since these rooms aren’t spacious. They’re long, narrow hotel rooms inside a train. I found the novelty quite fun, but if there had been a large price differential between a regular room and a train car, it probably wouldn’t have been worth it to me. On a Sunday night in May (Mothers’ Day, as a matter of fact, although we didn’t plan it that way!), our cost came to $189.53, including taxes and breakfast for 2. If you’re a guest at the hotel, it doesn’t cost anything extra to look at the outside of the train cars and snap a few photos, though! We stayed in train car #14, in the room they call “Greta Garbo”. (Each of the Pullman rooms is named for a famous person from that era – another one of the nearby rooms was P.T. Barnum.) 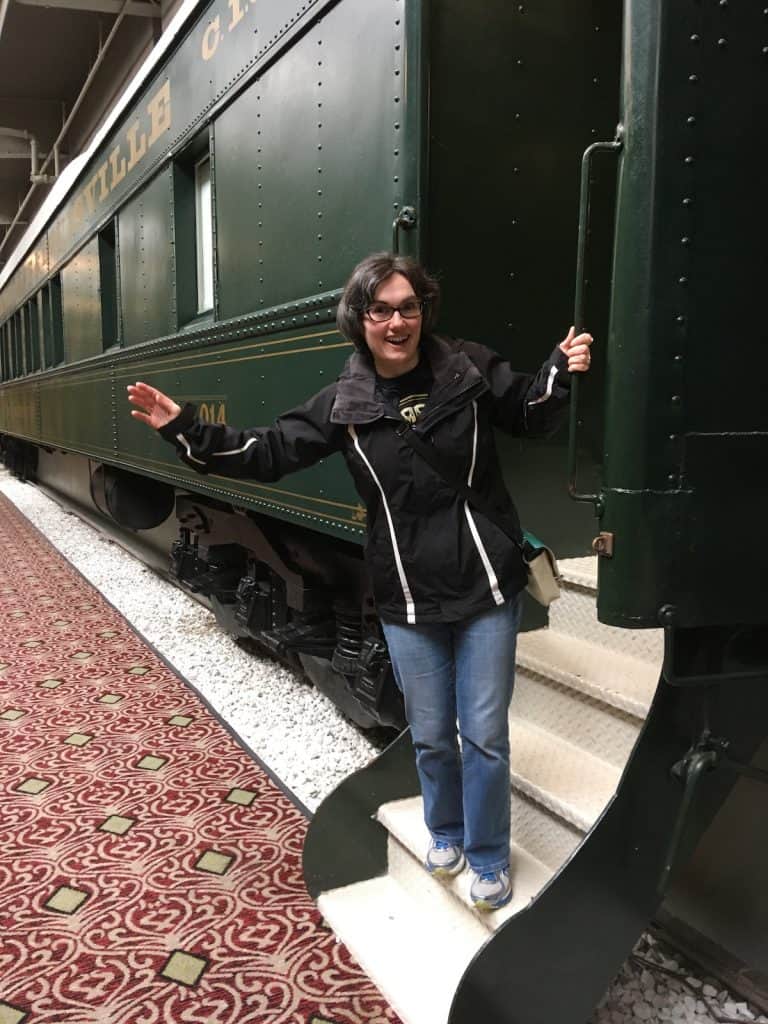 The overnight parking at the hotel (valet) is a whopping $40/night, so I was glad that we didn’t have a rental car. (There is also an unaffiliated parking garage across the street from the hotel that offers self-park for $30/night.) On Monday, we also took advantage of the hotel’s free local shuttle to visit the Massachusetts Avenue shopping district approximately 1 mile away. The shuttle service was not mentioned at check-in, it only came up because we were asking about the price of a taxi. When we called the hotel to be picked up again afterwards, the driver arrived very promptly.

Overall, the staff we had interactions with were very friendly and helpful, with the exception of the restaurant. The second morning (Monday morning), we went to the restaurant and were very surprised to see no buffet! Evidently, on nights with low occupancy, they don’t offer a buffet, and instead you can just select whatever you want from the menu. I don’t think I’ve ever had that happen to me at a hotel before! It worked out OK, and we ordered several different things, so you’re not restricted to just one entrée, in terms of the breakfast vouchers. I still felt that it should have been disclosed on the website that a buffet may not be offered on all days. The buffet was definitely better than the menu options, so I was glad that we got to try it on the first morning, at least. While we were eating, there were very few other customers (perhaps none?), so it looked like they weren’t kidding about low occupancy. I was surprised by how slow the service was, given so few customers, and the first thing I ordered had to be sent back because it contained meat, despite that not being listed as one of the ingredients on the menu. So that was an underwhelming experience.

One other small warning: don’t be surprised by the rumbling trains! We were warned about that at check in on the first night, and thought “what are they talking about?” The hotel was built on Tracks 1 – 8, leaving Tracks 9 – 11 still in use, just south of the hotel. When a train rolls through, it really shakes the hotel! It was a lot more noticeable the first night, so I think on the second night, our room was on the opposite side of the building. Being from Seattle, of course we both immediately thought of an earthquake first, before realizing what it was. It didn’t bother me, but it might have been a rude awakening if I had already been asleep!

The Crowne Plaza Indianapolis Downtown has a great central location, and even if you don’t stay in a Pullman car, it still has a lot of interesting history and décor that makes it more attractive than your typical convention center hotel.

Lauren lives in the Seattle area and is usually a Single Flyer also, unless one of her parents is along for the journey. She flies around 75,000 miles a year, racking up EQMs on Alaska Airlines and visiting new Hard Rock Cafes around the world. You will also find her typing out tweets for her little blue friend, @PanAmBag.