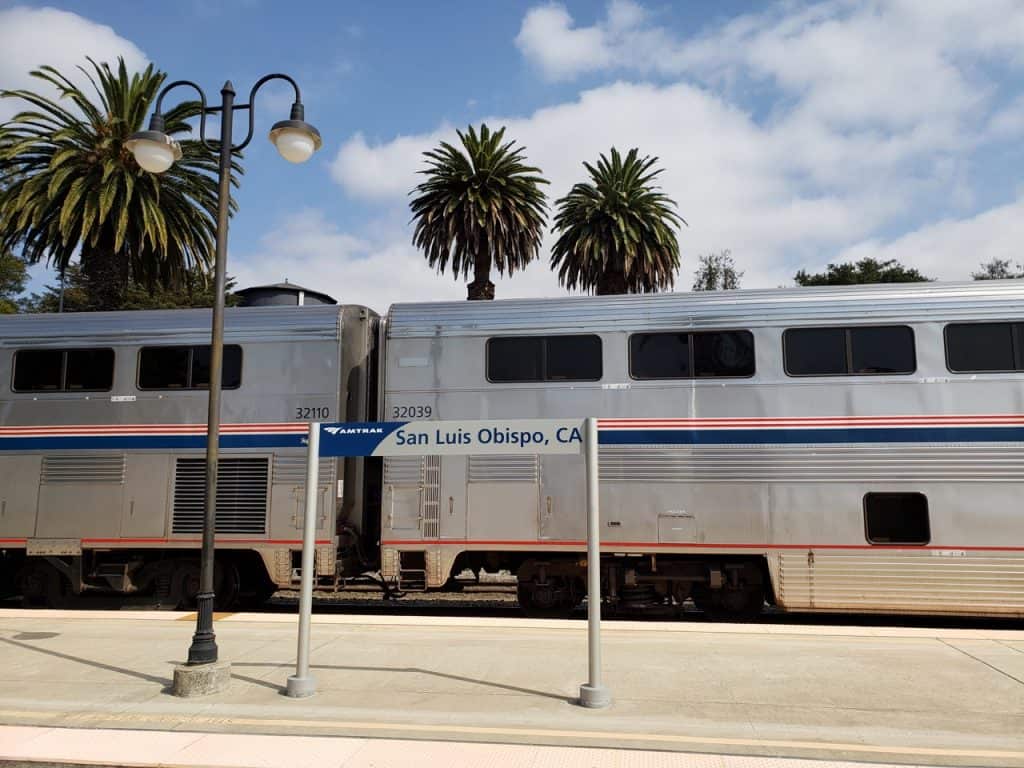 The Amtrak Coast Starlight route along the West Coast begins in Los Angeles and ends in Seattle (or you can take it the other direction).  You can also get on and/or get off at any of the stops along the way.  During my trip, the busiest section was Portland to Seattle.  The entire journey is about 35 hours.  The Coast Starlight is serviced by Amtrak Superliners, the silver double decker train cars with various configurations. 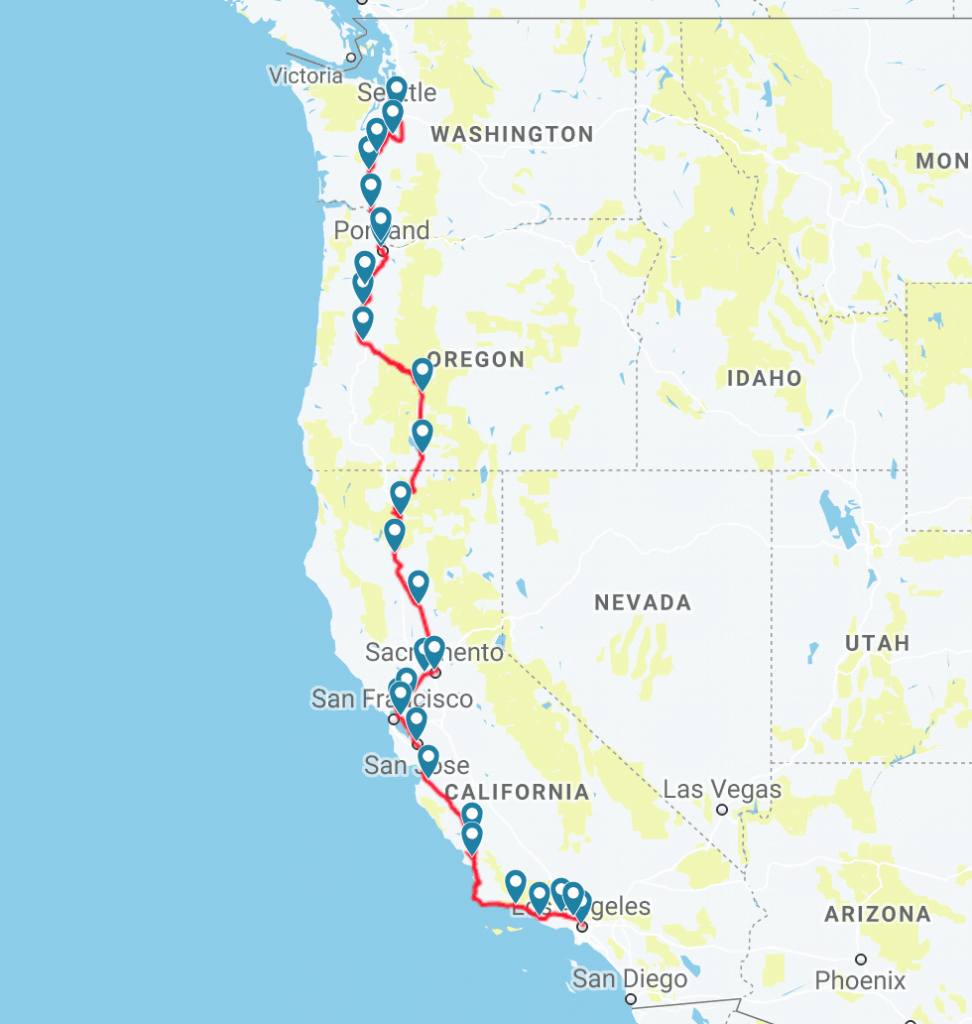 A year ago I signed up for the Amtrak Guest Rewards Mastercard by Bank of America. At that time, there was a sign up bonus of 30,000 points after $1,000 in spend and $79 annual fee.  I had spent a few weeks traveling the US by Amtrak during college, but that had been in coach.  15 years later, I thought it would be fun to try the more luxurious version and book a Bedroom on the Coast Starlight from Los Angeles to Seattle.

I booked my one way ticket for Labor Day weekend about 9 months ahead of time.  I redeemed 30,050 points for the Bedroom for one passenger.  A second passenger would be another 4,200 points.  The cash price was around $900.

I happened to check the price again a few weeks prior to my trip, and I noticed the same Bedroom was now only 23,909 points.  I called in to Amtrak Guest Rewards and was pleasantly surprised that the agent was able to refund me the difference!  I don’t think it is the policy to do this without a change fee, but I was very appreciative of the refund.

When booking a Bedroom or Roomette (the smaller version), all meals are included.  You also get access to the Metropolitan Lounge in Los Angeles (an Portland if you begin or end there). 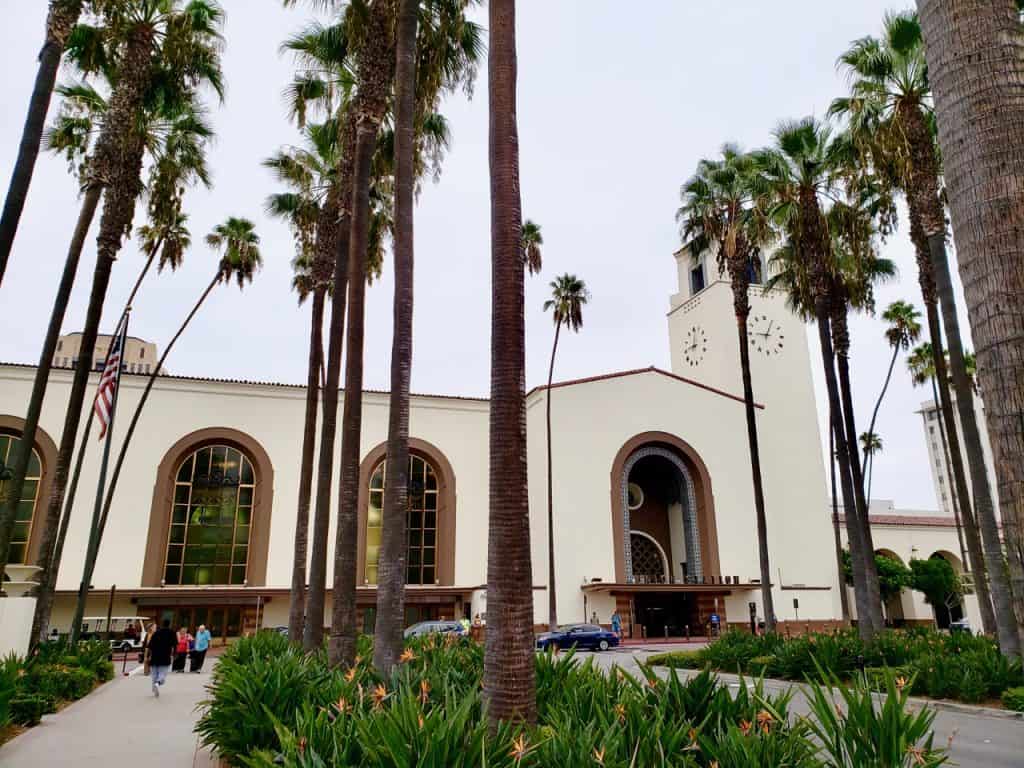 Upon arriving at Platform 10 around 10:00am, there was no train on the tracks.  In fact, it didn’t arrive from the train yard until 10:10am, so clearly our departure was going to be a bit delayed.

Our train had an engine, luggage car, crew car, three sleeping cars, one dining car, one business class car, one observation car, and two coach cars.  I was in the first of the sleeping cars.  You can read my review of the Bedroom here.

The car steward introduced himself and serviced the train for the duration of the trip.  He had been working on Amtrak for 14 years.  Apparently the Coast Starlight is a coveted route to work so it is predominantly senior staff.  He explained that if we decided to dine in the car to let him know.  He also gave a brief tour of the compartment.

Next came the Dining Car manager to take meal reservations. You can read more about the dining experience here.

We snaked our way through Los Angeles before the first stop at Burbank Airport. 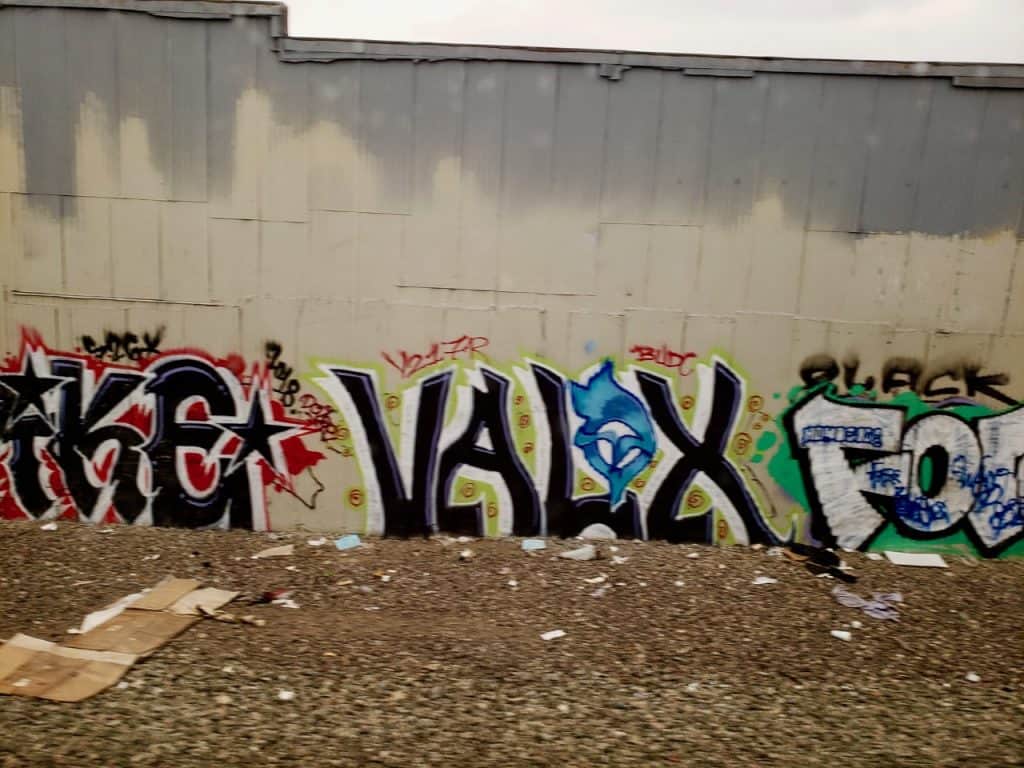 Cutting through Simi Valley, it was around the time that we hit the coast in Ventura when I was called for my lunch reservation. 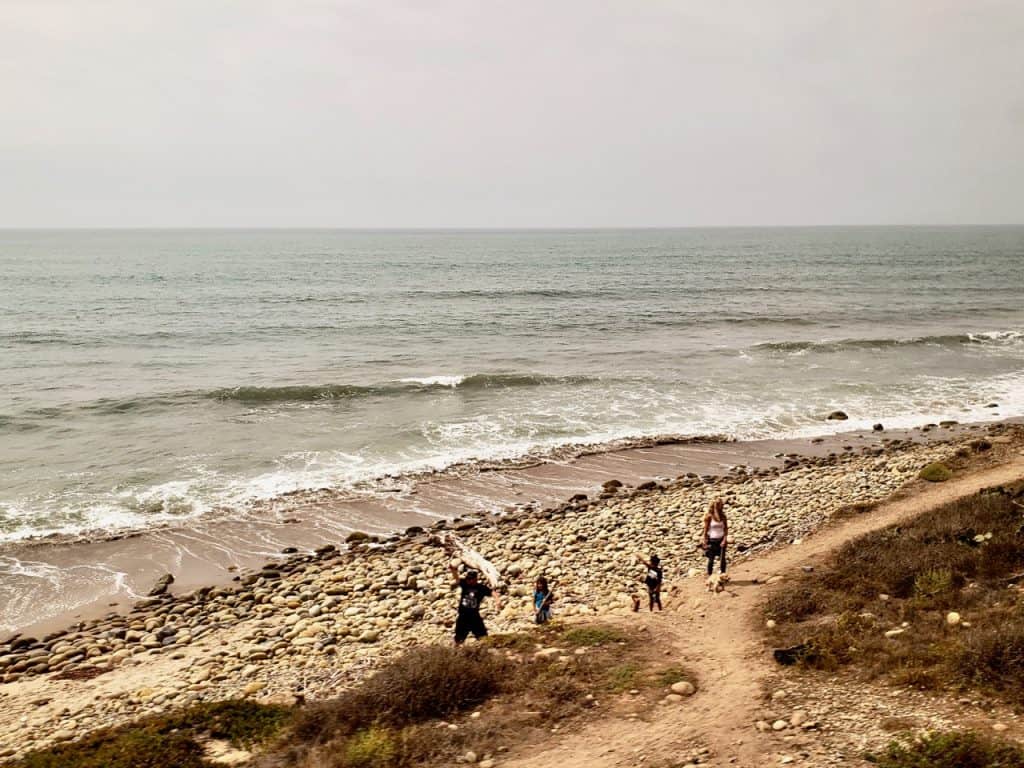 We stayed along the coast up through Santa Barbara and through Vandenberg Air Force Base.  During the section between Santa Barbara and San Luis Obispo, two National Park volunteers acted as guides in the Observation Car.  They were quite entertaining and actually pointed out a lot of neat things like rocket launch pads and Space X facility as well as natural points of interest and history. 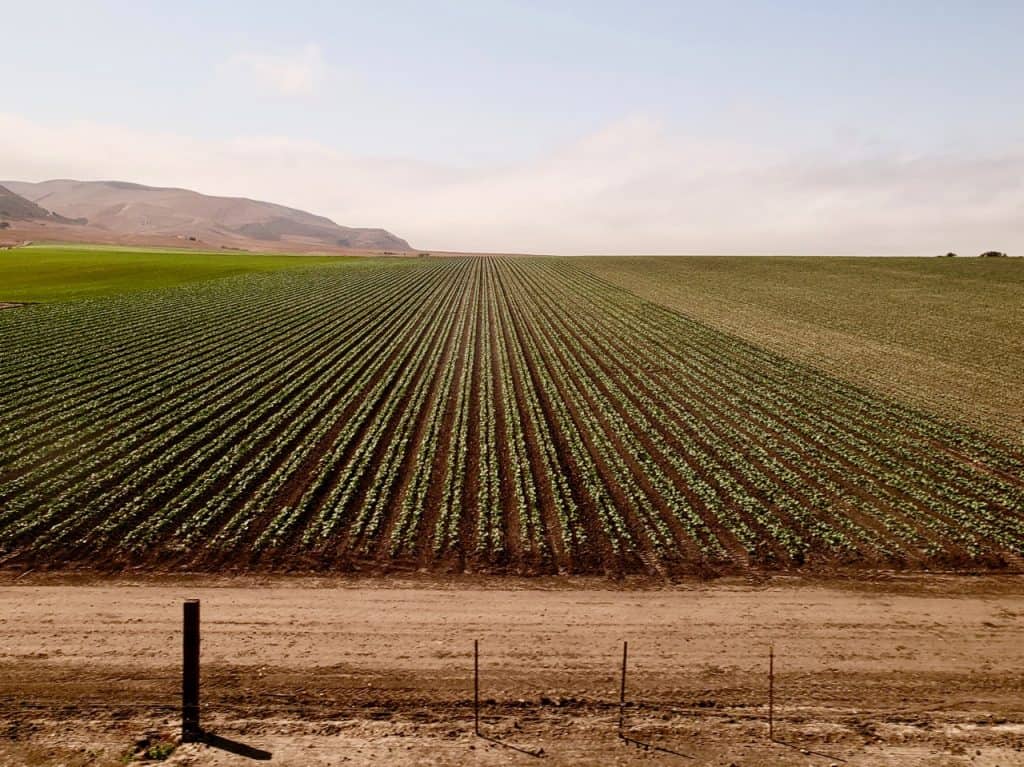 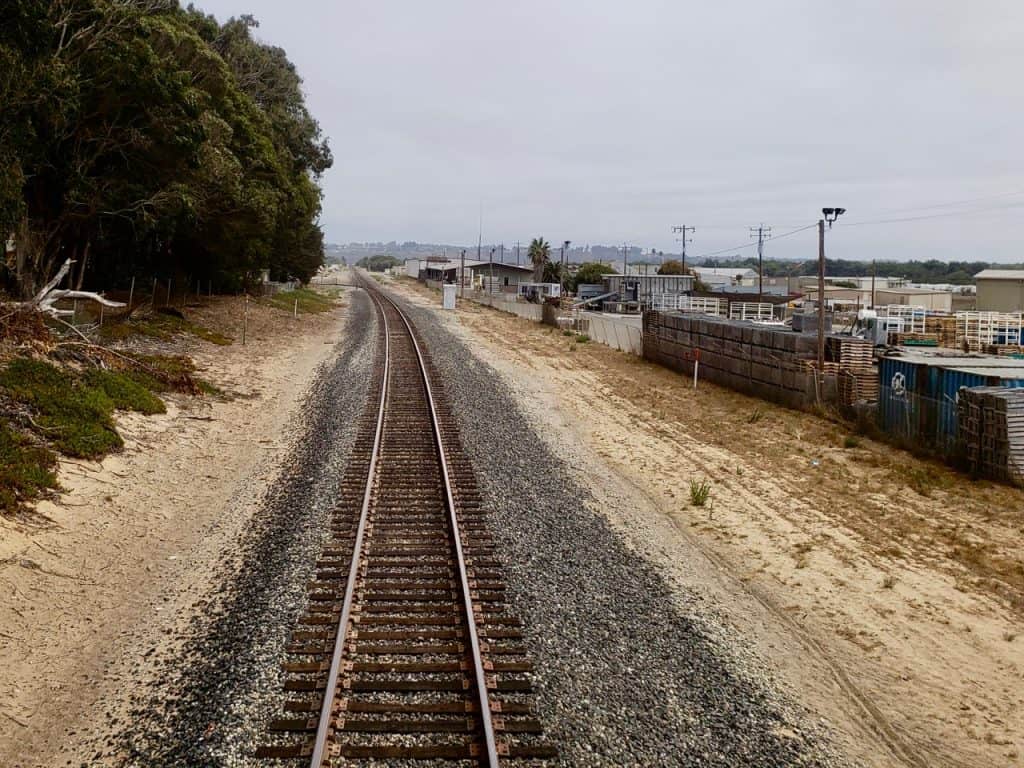 Just below the observation area is the snack/bar car.  I never tried the food there since meals in the Dining Car were included but it seemed like more casual food.

The Business and Coach Class cars are the exact same.  You just have a few more perks with Business Class like water and free wifi.  However, I never saw the wifi working throughout the entire trip.

At San Luis Obispo we took a longer “fresh air” stop.  The stops in larger cities typically were about 20 minutes and passengers were allowed to step off the train.  At smaller stops, no one was allowed off unless that was your final destination.  Those stops were only about 2 minutes (enough to let people off and new passengers on).

I made a 6:30pm dinner reservation which ended up being around the time we hit Salinas through San Jose. 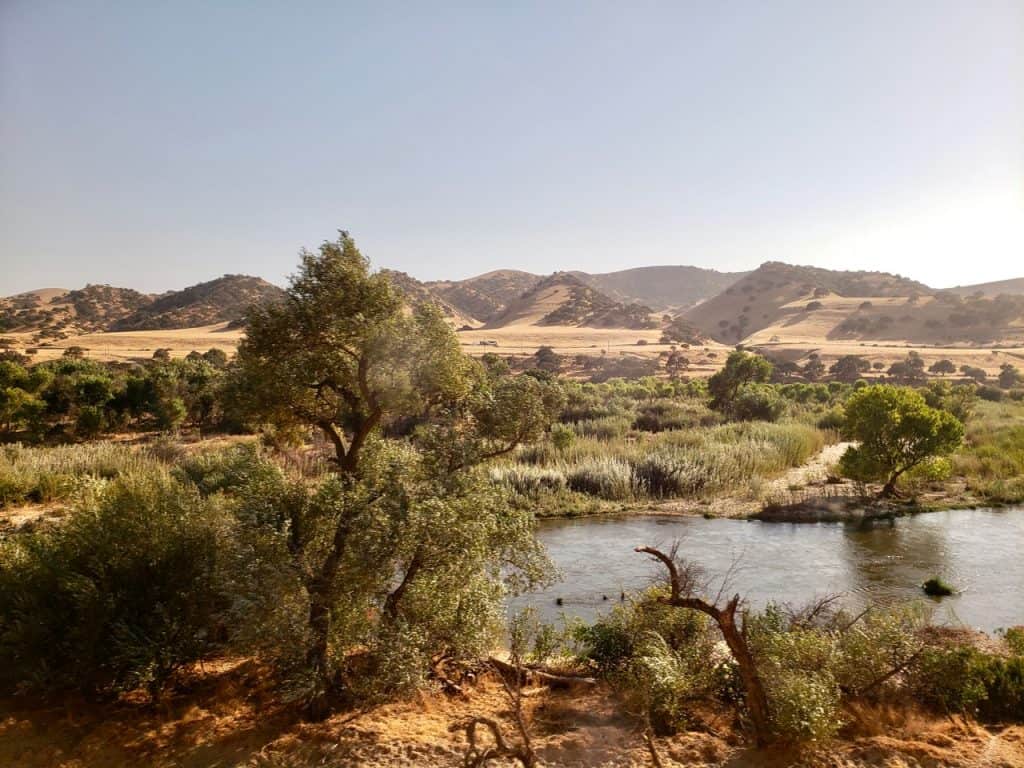 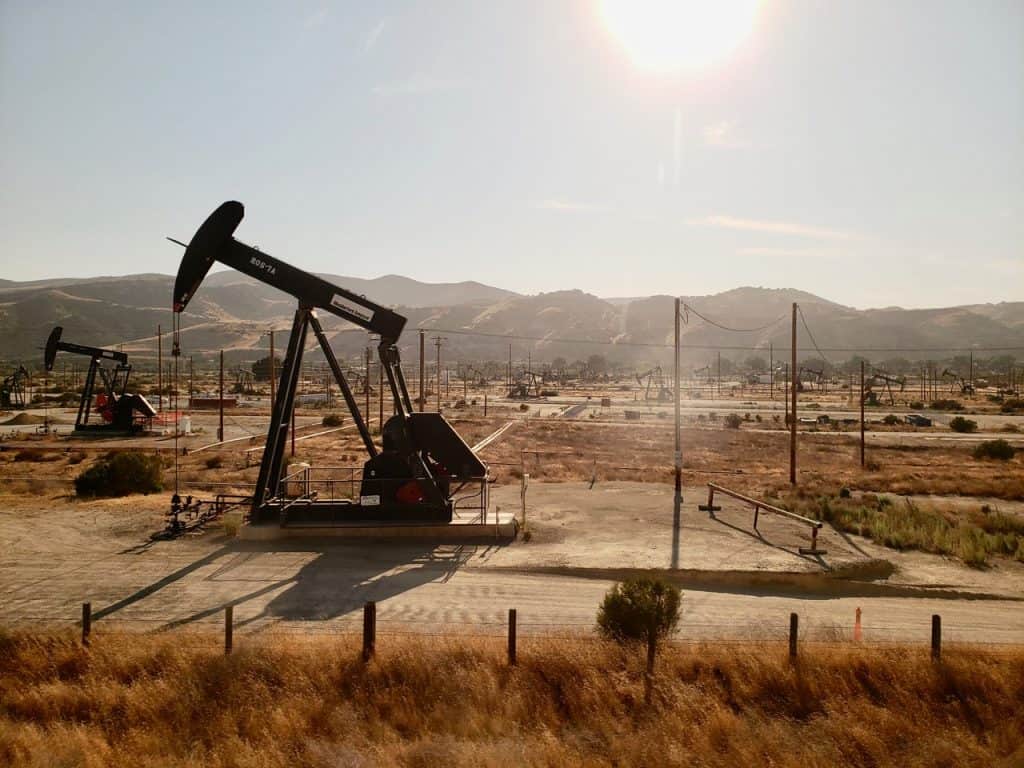 By the time we hit San Jose at 7:45pm it was starting to get dark so I retreated to my room.  I called for the attendant to make up my bed around 10:00pm and was able to get some restless sleep.

I woke up around 6:00am and decided to take a look at where we were.  When I opened the curtain on my door I saw Mt Shasta on the east side of the train as the sky was starting to get lighter.   I decided to make my way to the observation car to get a nice view before an early breakfast in the dining car over the sunrise. 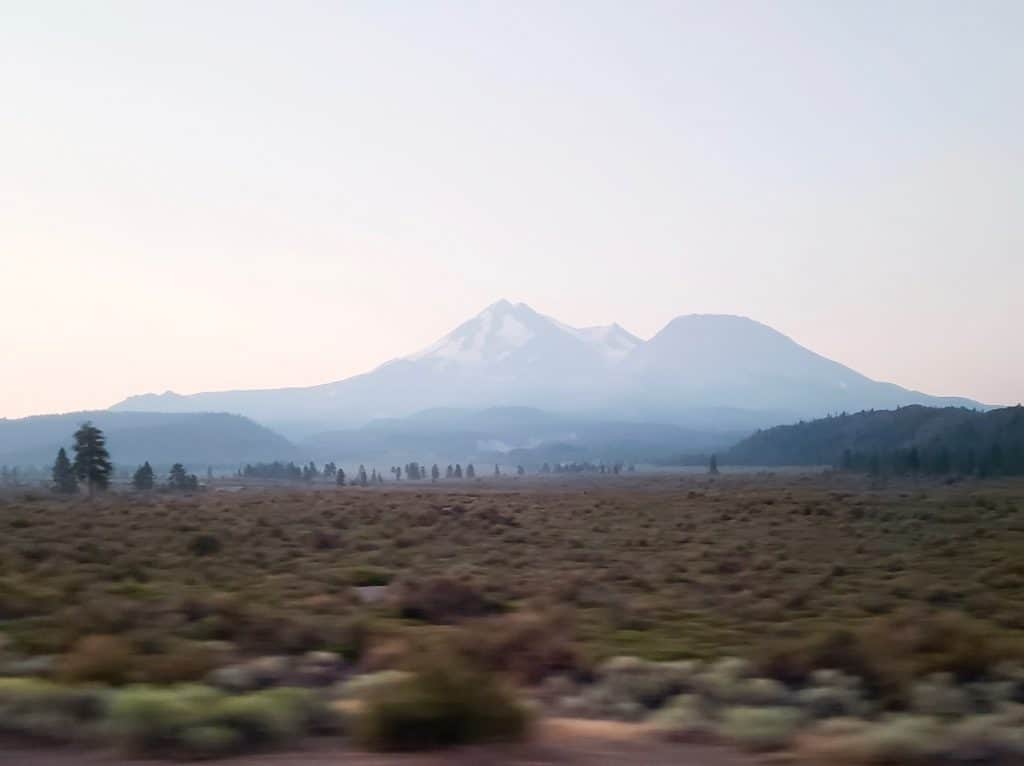 After breakfast I headed back for another hour of sleep.  After a shower, I headed back to the observation car as we passed through Winema National Forest and Look Out Point Lake. 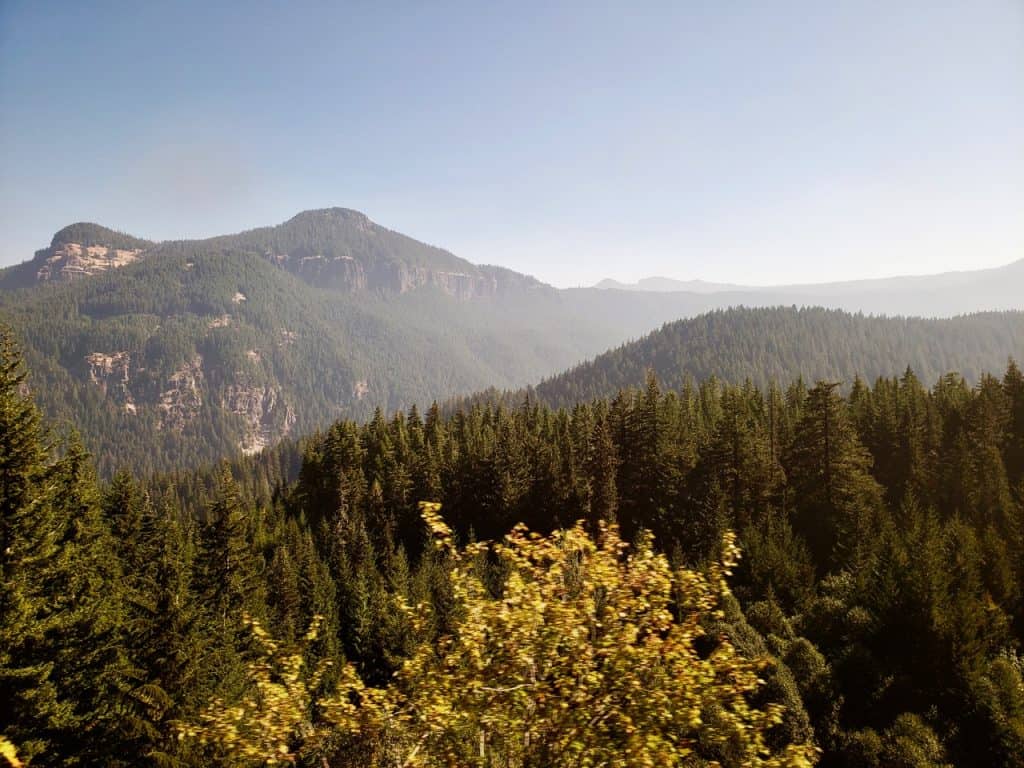 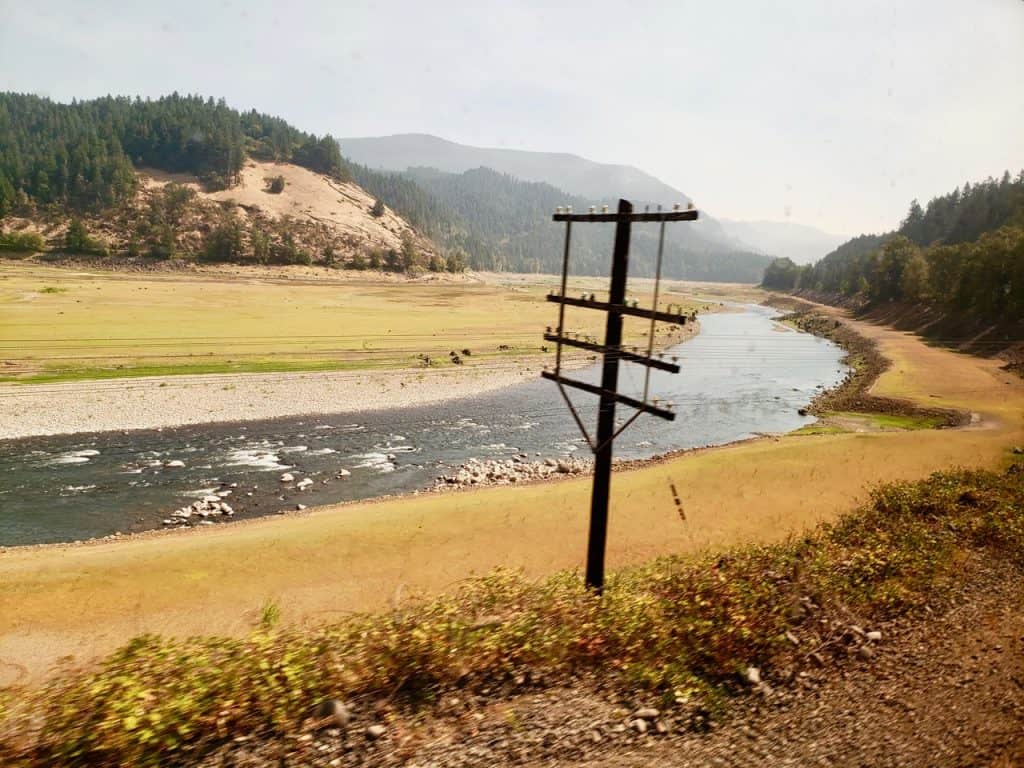 We arrived at Eugene while I was finishing lunch at 12:45pm, only about 15 minutes late.  We continued north, paralleling Interstate 5 through Western Oregon. 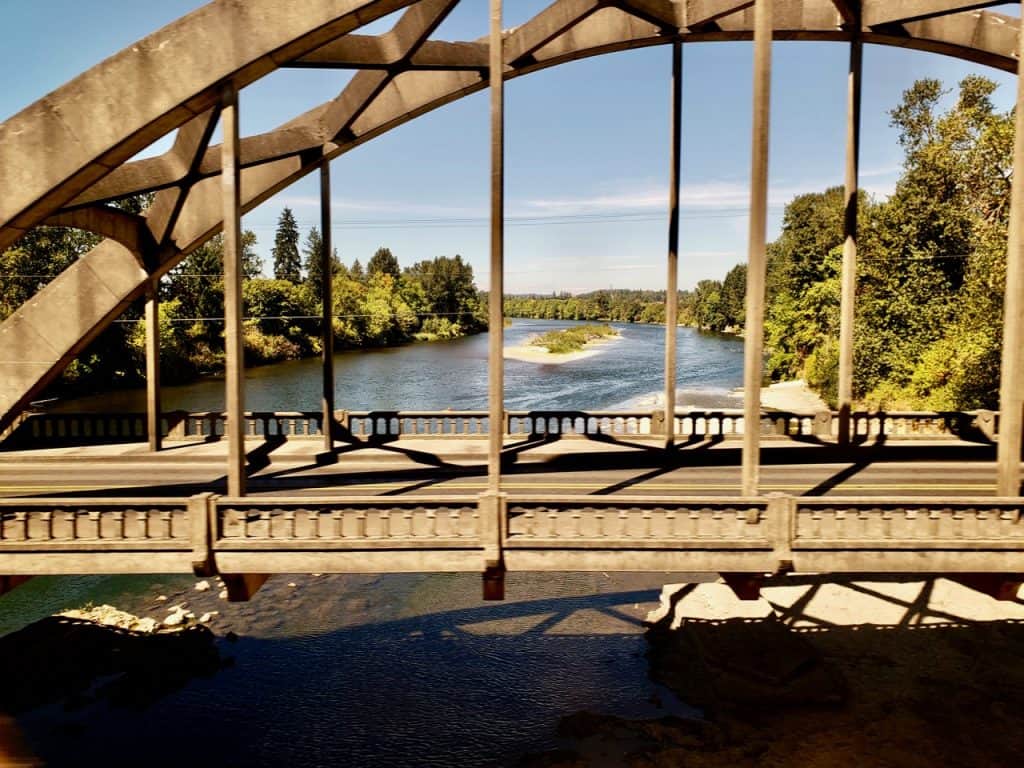 We had an on-time arrival into Portland’s Union Station around 3:30pm.  This was the busiest stop of the trip; with many people getting off and an even larger number of people getting on for the trip north to Seattle. 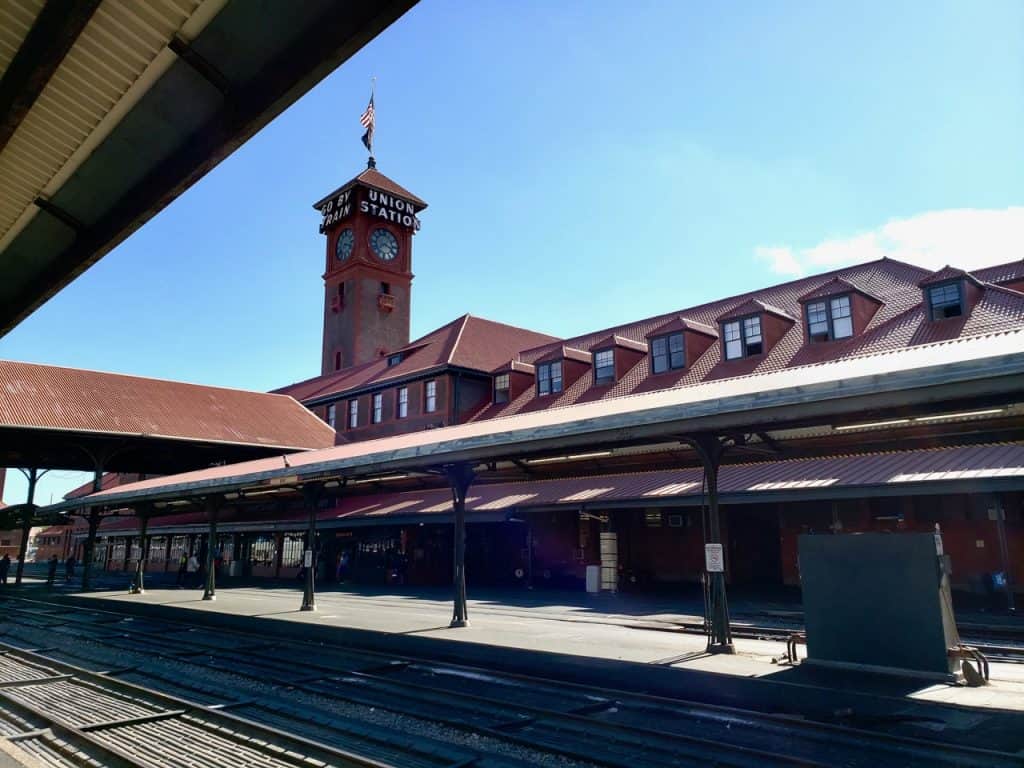 We crossed over the Willamette River with a view of the St. John’s Bridge before crossing over the Columbia River into Washington. 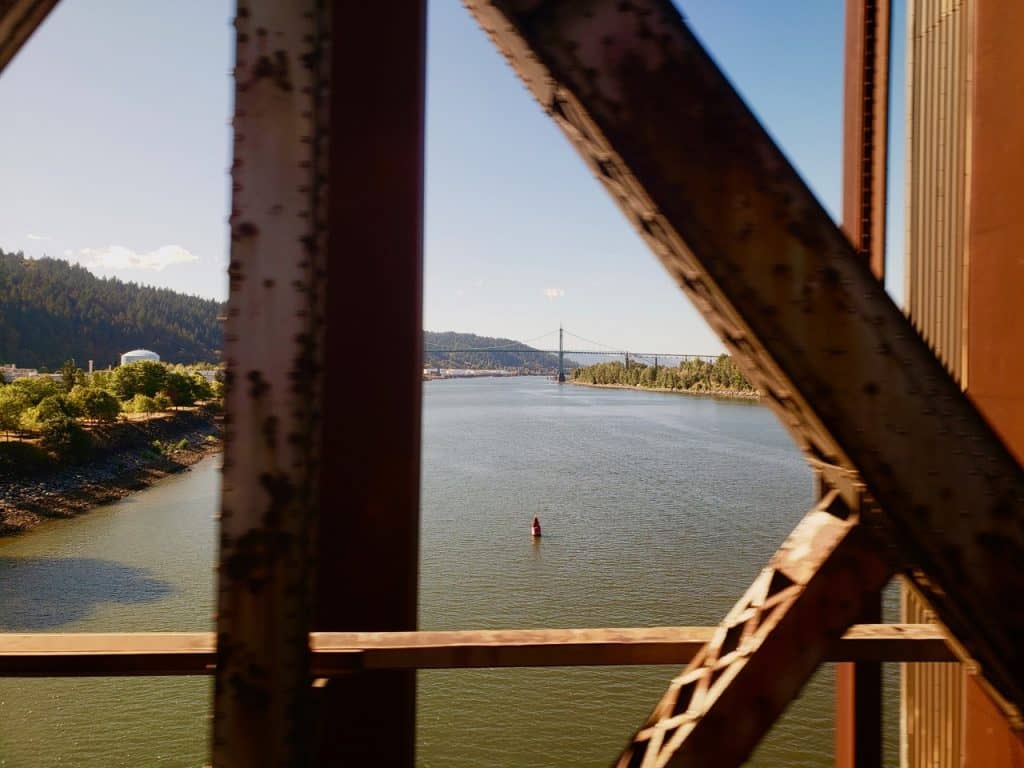 We were able to see all of the mountains heading north, starting with Mt Hood, then Mt St Helens, and finally Mt Rainier.  In the Observation Car during the Portland to Seattle leg, we again had National Park volunteer guides to share the history of the region with emphasis on the Mt St Helen’s volcanic eruption.

Just past Olympia the train began to snake along the Puget Sound.  The track during this portion is just feet from the water’s edge.  I spotted a seal at one point swimming along side the train. 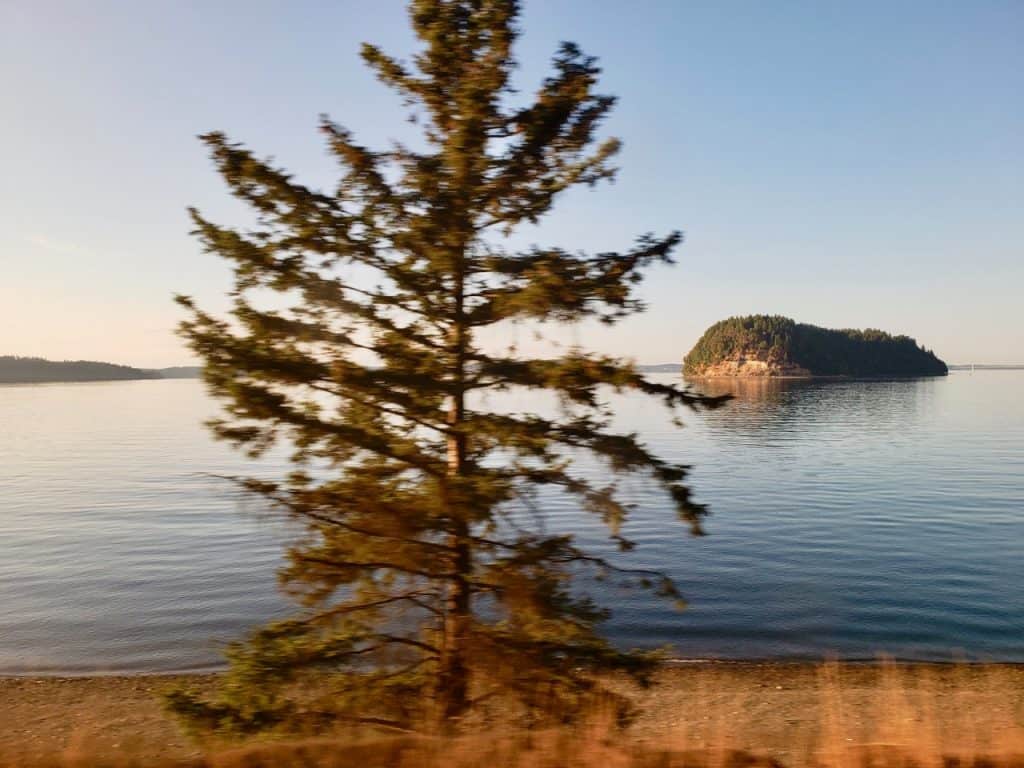 I had dinner in my room as we passed under the Tacoma Narrows Bridge around sunset and made our last stop before Seattle. 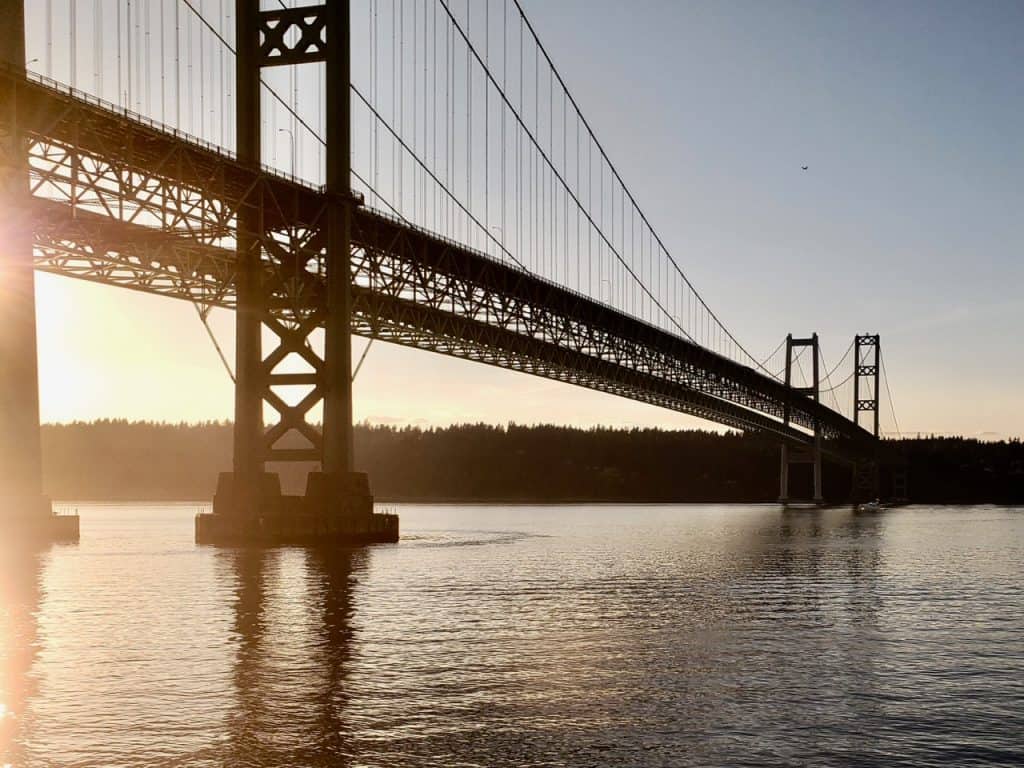 After passing a Mariner’s game at Safeco Field, we pulled into King Street Station in Seattle a couple of minutes early.  Just under 36 hours after departing Los Angeles. 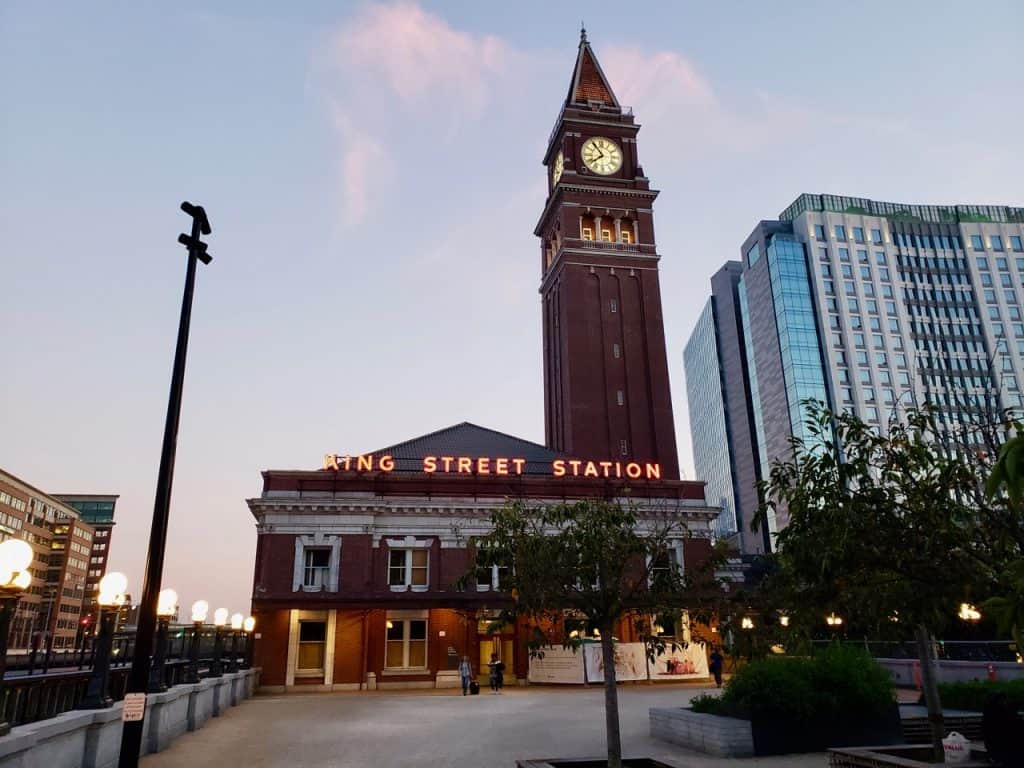 In a time where all of the glamour of domestic air travel has disappeared, it is a nice change to travel in what feels like a time capsule of another era.  Even Amtrak is changing, however.  Earlier this year the Coast Starlight lost the Parlor Car, a throwback to another age of rail.  It is hard to know how long train travel as we know it will continue to exist in America.  With the beautiful views and relaxed, TSA free attitude, it is worth investing the time and money to take a memorable journey on the Coast Starlight.