On Amtrak Superliner trains, there are five types of seating.  For those that want a seat, there is Coach and Business Class.  For those that want a private compartment, there is the Roomette, the Bedroom, and the Family Bedroom.  For my Coast Starlight trip from Los Angeles to Seattle I decided to book a Superliner Bedroom.  I also booked the Superliner Bedroom for my journey on the California Zephyr from San Francisco to Chicago. 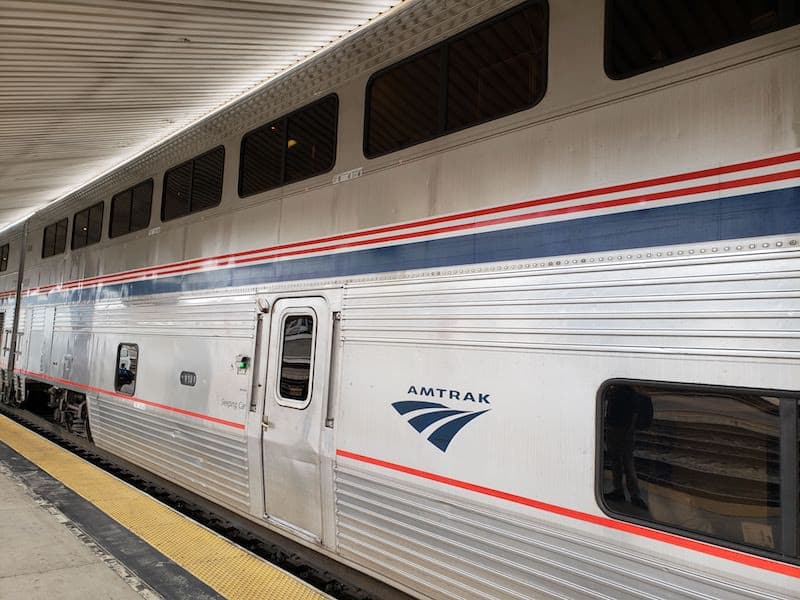 Note: While this review is based on the Coast Starlight route, the Sleeper Cars are identical on most long distance Amtrak routes.

Each Superliner Sleeping Car has a total of 14 Roomettes (10 on upper level, 4 on lower level), 5 Bedrooms (all on upper level) and 1 Family Room and 1 handicap room (lower level).  In addition, there is one public toilet on the upper level and three toilets plus a shower on the lower level.

In addition, in the middle of each car is a coffee and juice station. 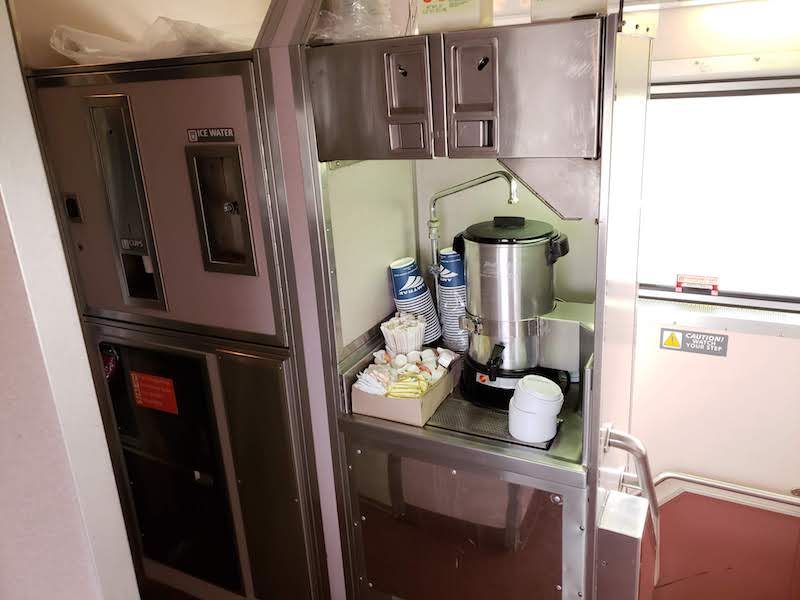 All five Bedrooms are on one side of the train.  A hallway runs along the side with doors to the compartments on one side and windows on the other. 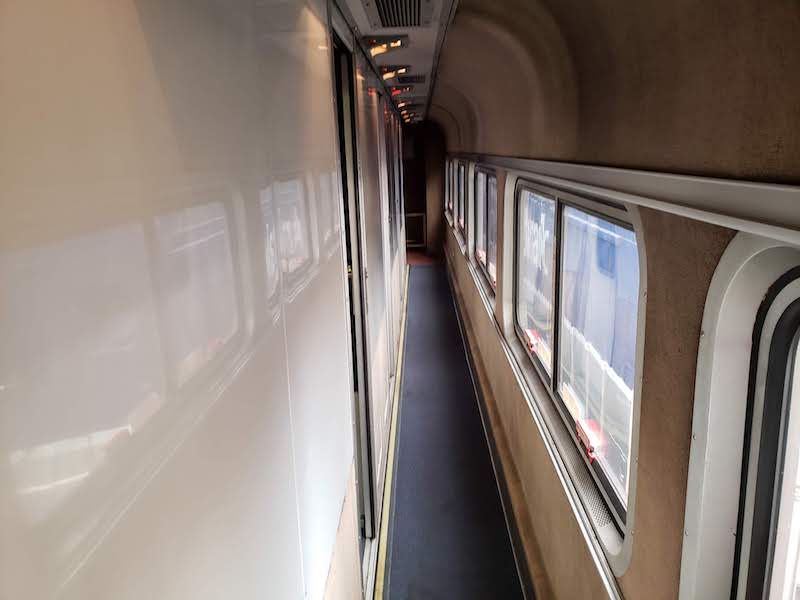 The other half of the upper section of the car has Roomettes on each side of the hall. 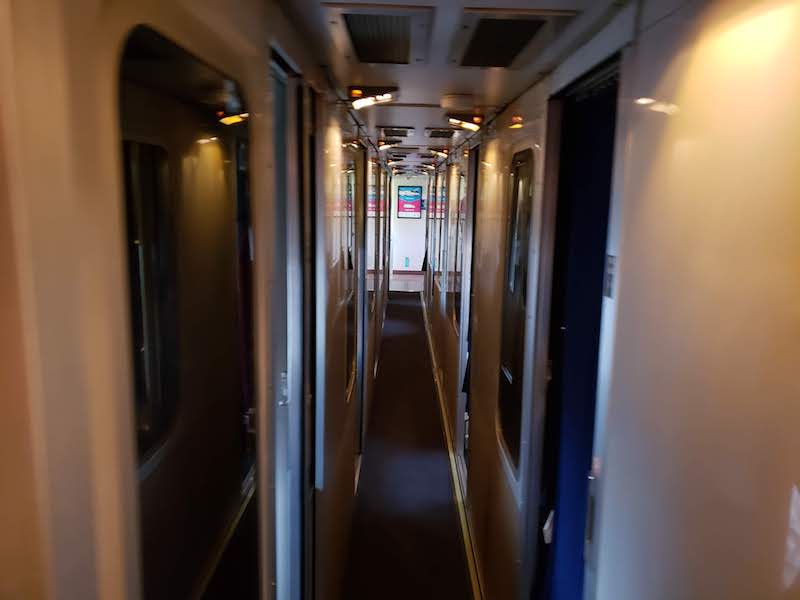 I was in Bedroom E in the first Sleeping Car on the train.  This mean that there were two cars between me and the dining car which meant a longer walk for meals but also less traffic.  Bedroom E is closest to the stairs and nearly exactly in the middle of the train car.  The car starts with Bedroom A and works its way back to E in the middle. 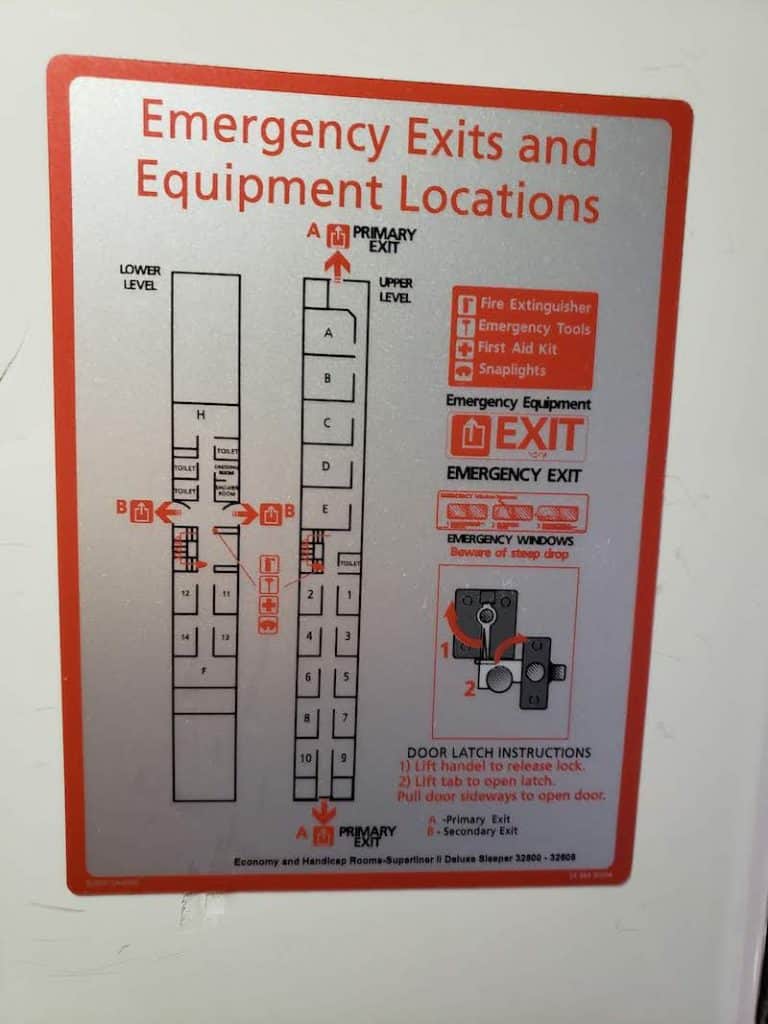 Here is a graphic borrowed from the Amtrak website that gives an idea of the layout of the Bedroom.  The room is 6.5′ by 7.5′. 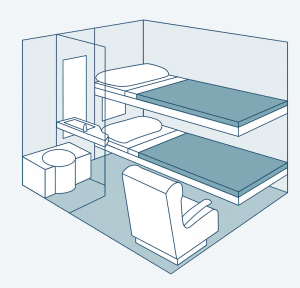 The door to the Bedroom is narrow but has a window taking up a good portion of it.  It can be locked from inside only.  A curtain can be drawn for privacy. 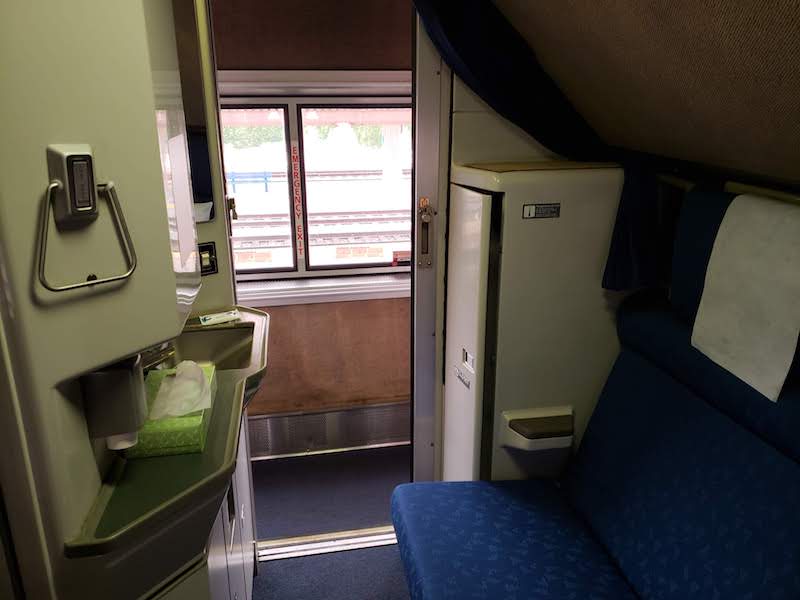 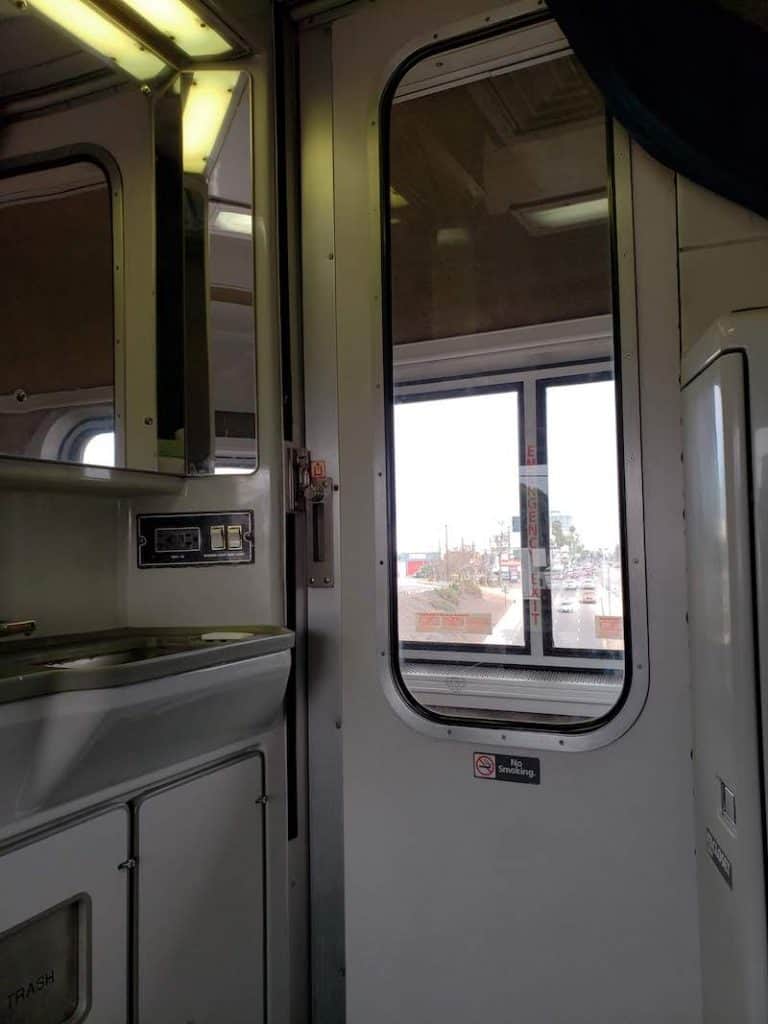 Just inside the door is a small coat closet with two hangers and not room for much else. 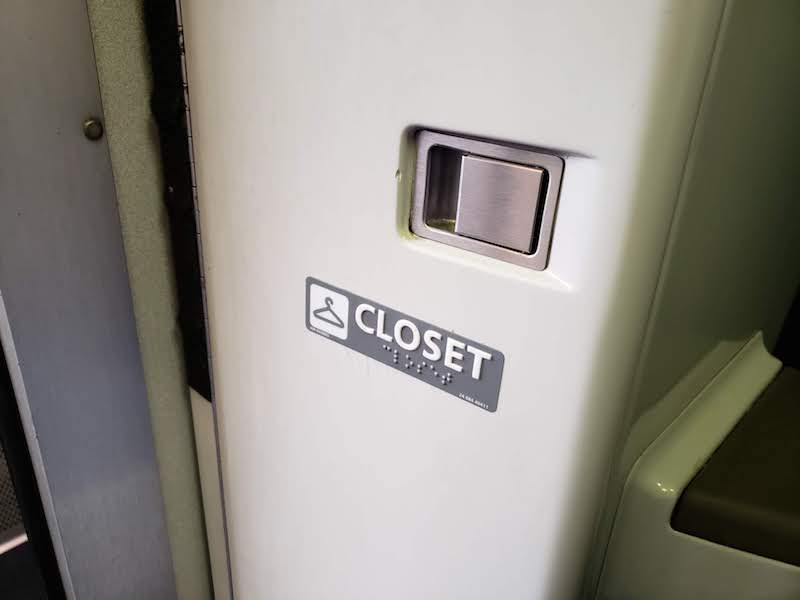 Across from that is the vanity with a small sink.  Like many airplane sinks, you must hold the lever down to get water.  There is a hot and cold lever, but my water was always cold (maybe I needed to let it run to get it warm).  The water pressure was extreme; any time I washed my hands the spray got my clothes and the door wet. 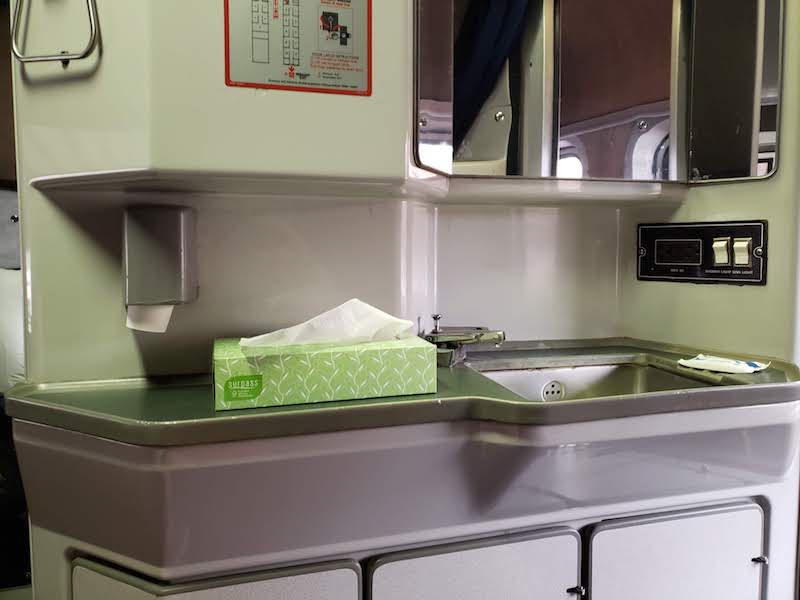 Below the sink was storage for garbage, toilet paper, soap and towels. 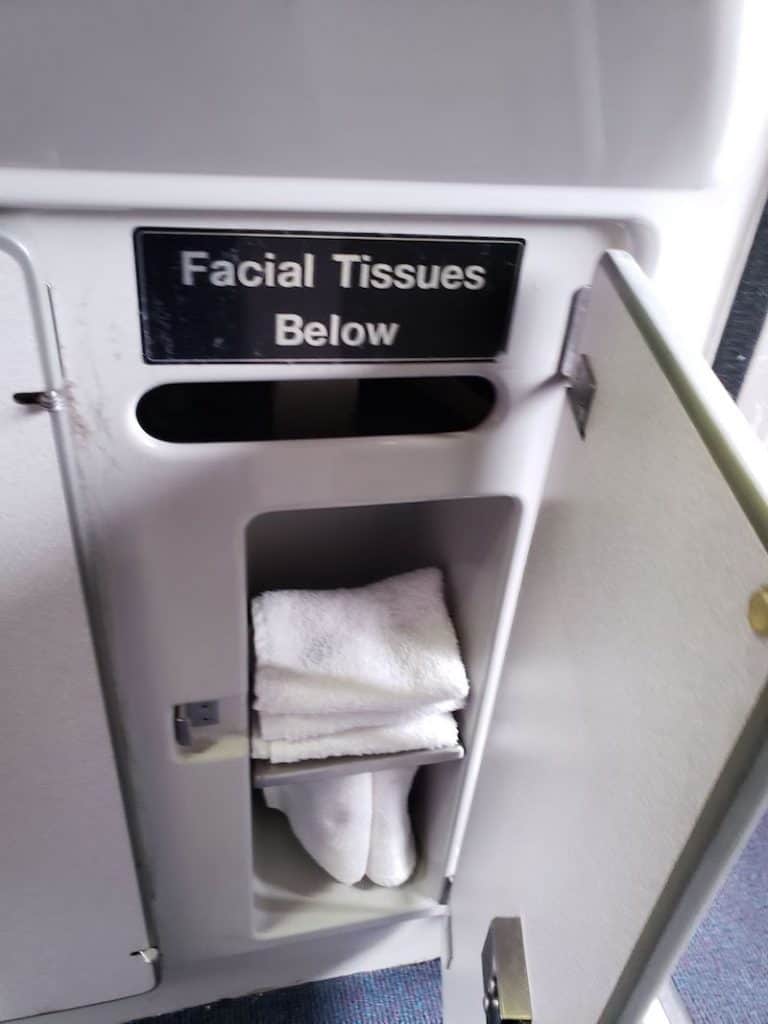 Against the opposite wall (and next to the closet) is a large bench seat that can easily seat 2+ people.  On it were a couple of pillows and a blanket.  The bench can fold out to a bed.  In addition, a second bed folds down from the wall above the bench seat. 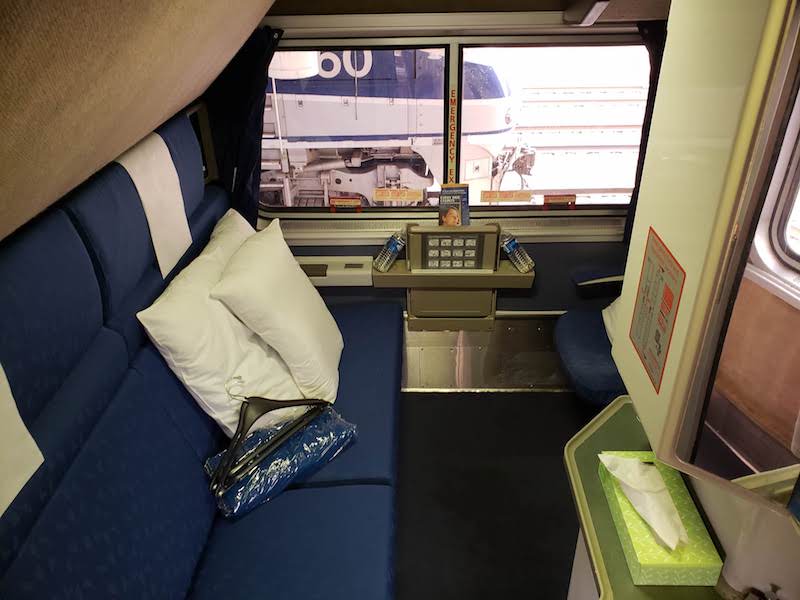 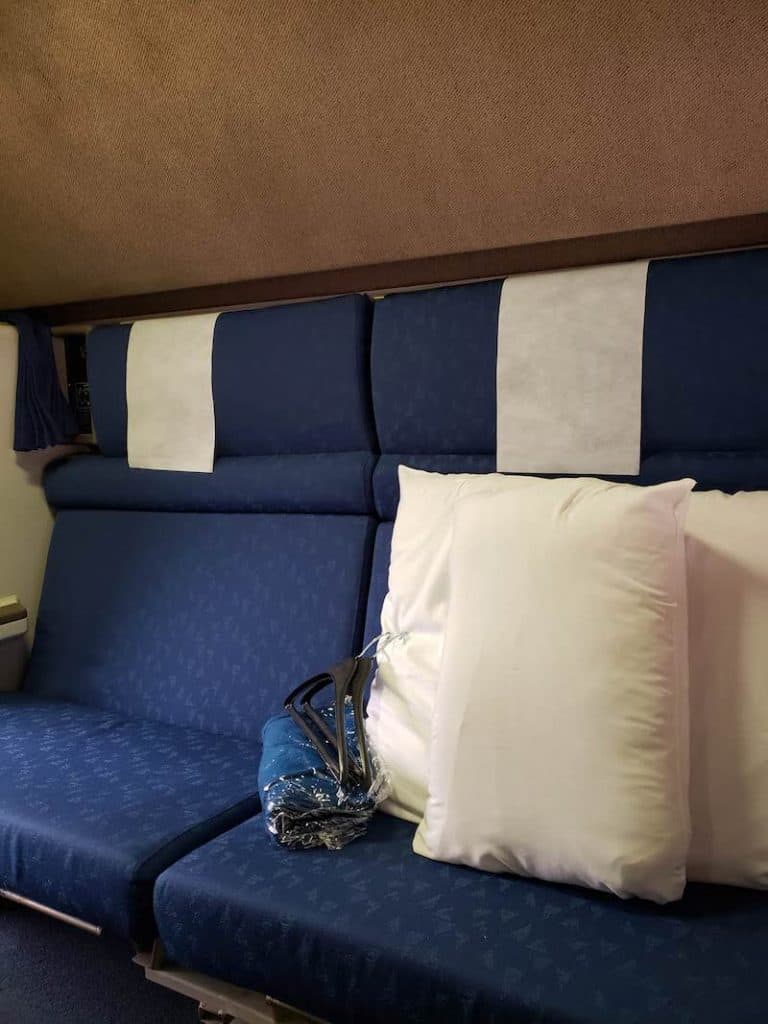 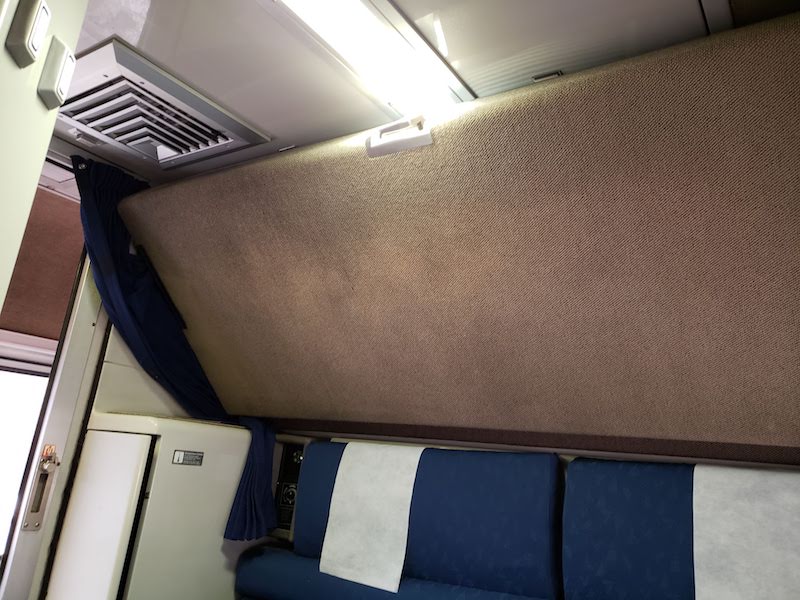 Across from the bench is a single “captain” seat that faces backwards (at least in our train’s set up). 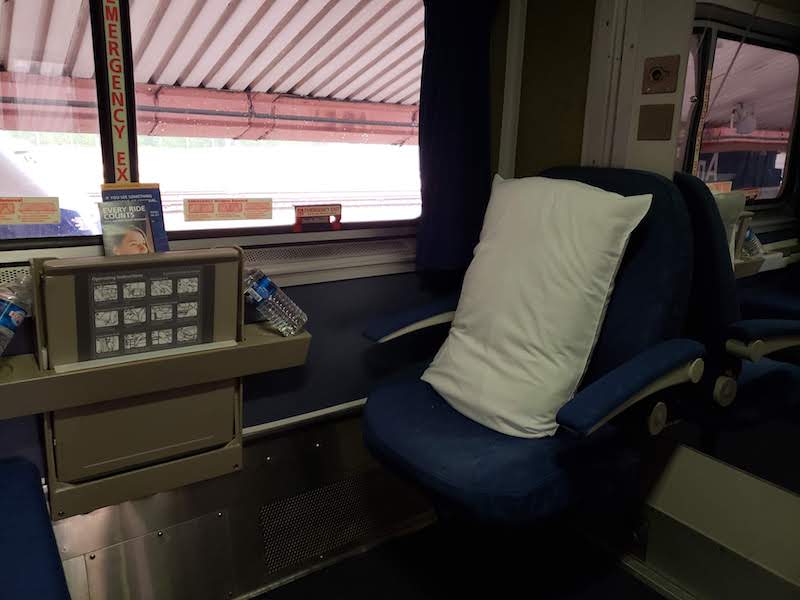 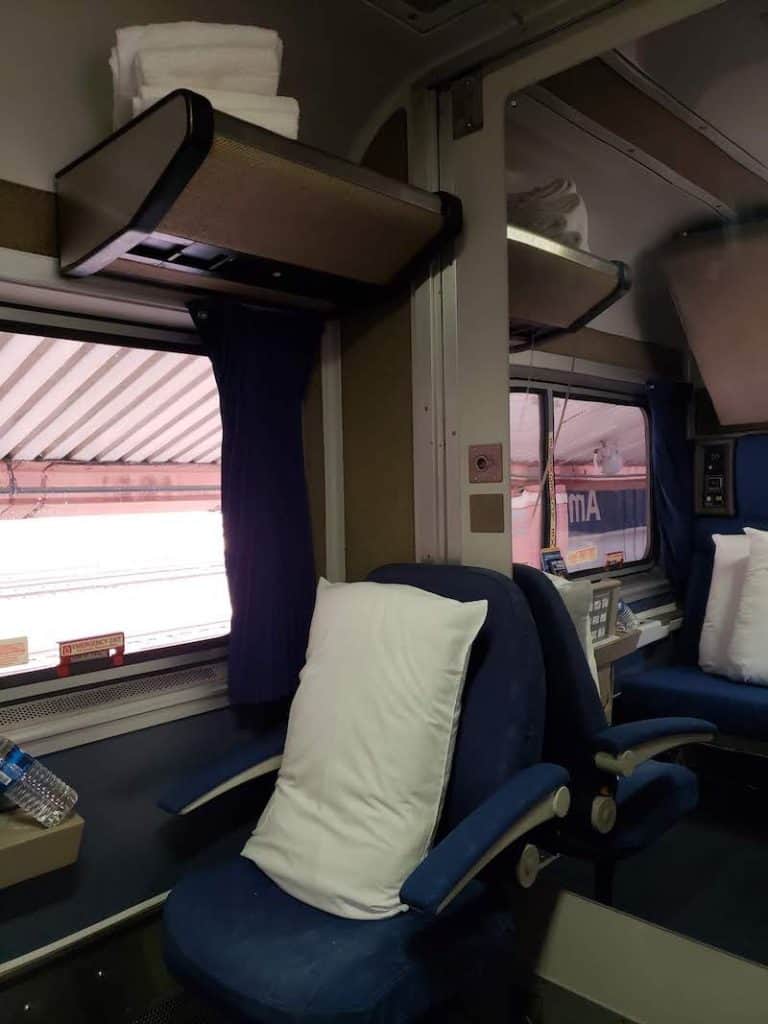 Behind the captain seat (the mirror in the photo above) is a door that can open into Bedroom D by the staff (think of it as adjoining hotel rooms).

In between the captain seat and the bench is a small table that can fold out.  It doesn’t lay very flat, I think it has been broken down over years of use.  On either side is a shallow cup holder. 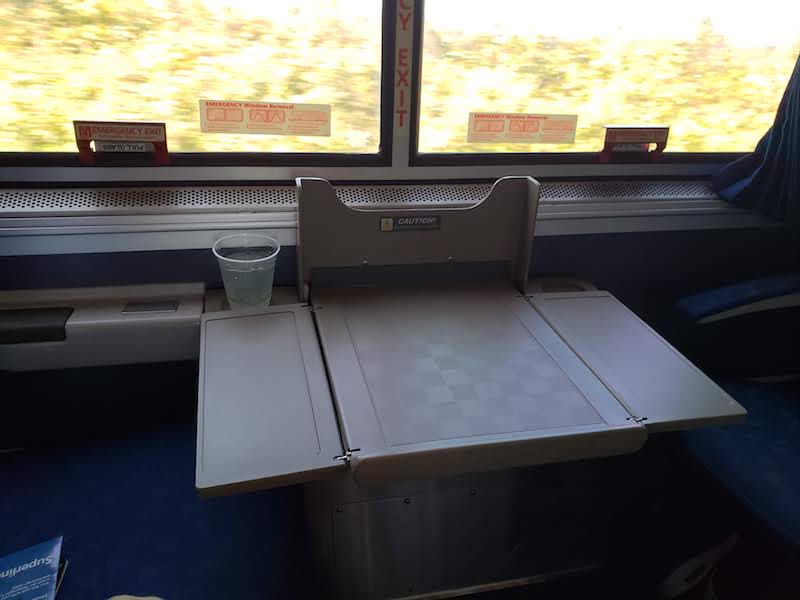 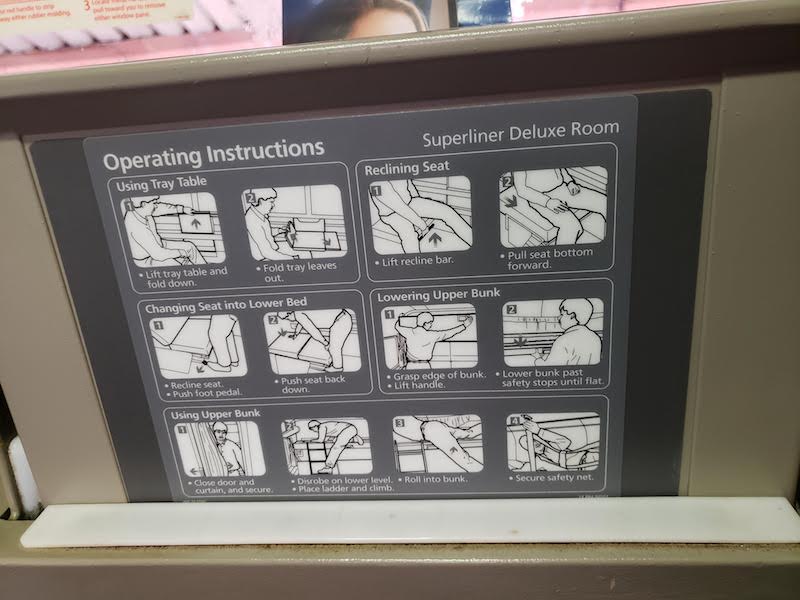 The toilet/shower combo is accessed through a door next to the captain seat.  Inside is just enough room for the toilet.  The handheld shower head attaches to the side wall with controls next to the toilet paper. 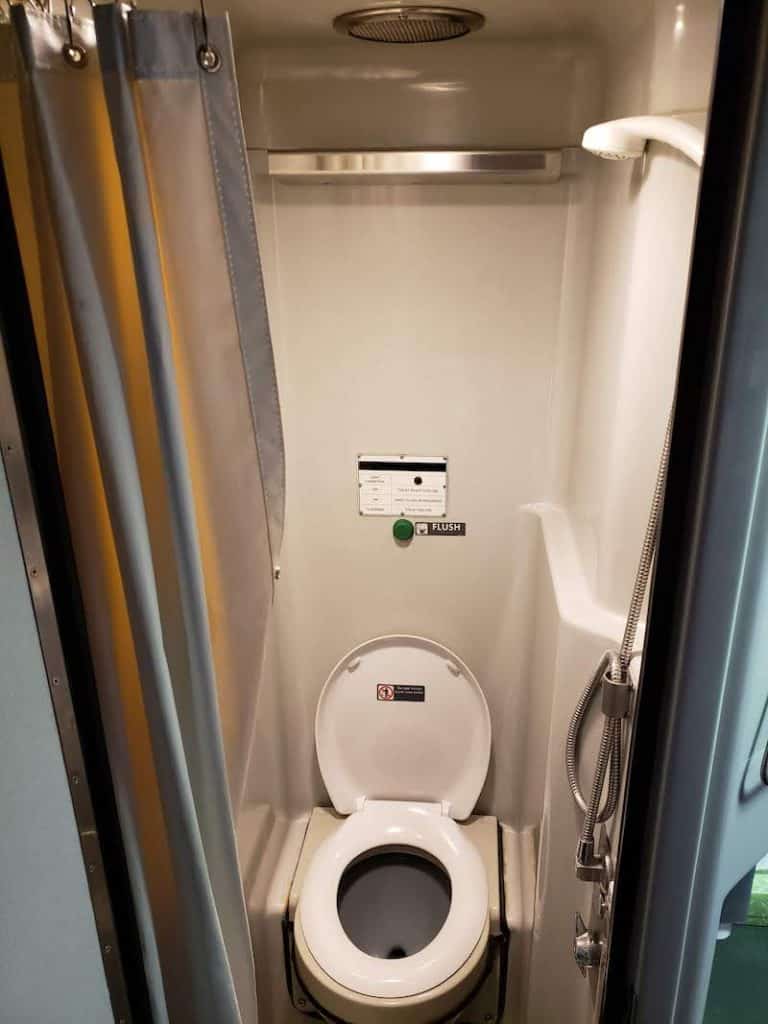 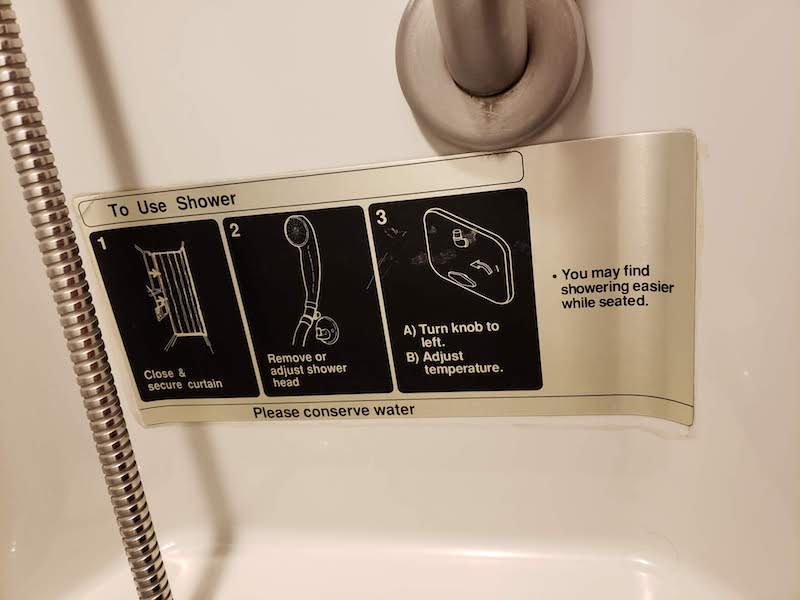 Overall the shower is a cleaver set up.  A shower curtain pulls across the door and snaps in to place to prevent water from escaping into the room.  There is a hook on the door but behind the curtain to keep your towel dry.  The toilet paper is covered by a plastic door to keep it dry.  The water was warm and surprisingly good pressure.  There is not much room to move, but I was able to shower just fine.

Throughout the rest of the compartment there are plenty of hooks for towels and clothes, shelves, lights and one outlet by the door in addition to two by the sink (this placement seems terrible; I suppose originally meant for electric razors?).  The airflow is controlled by a lever in the air vent to moderate the volume of conditioned air coming into the room.  A dial allowed for temperature control.  I was surprised how chilly I was able to get my room. 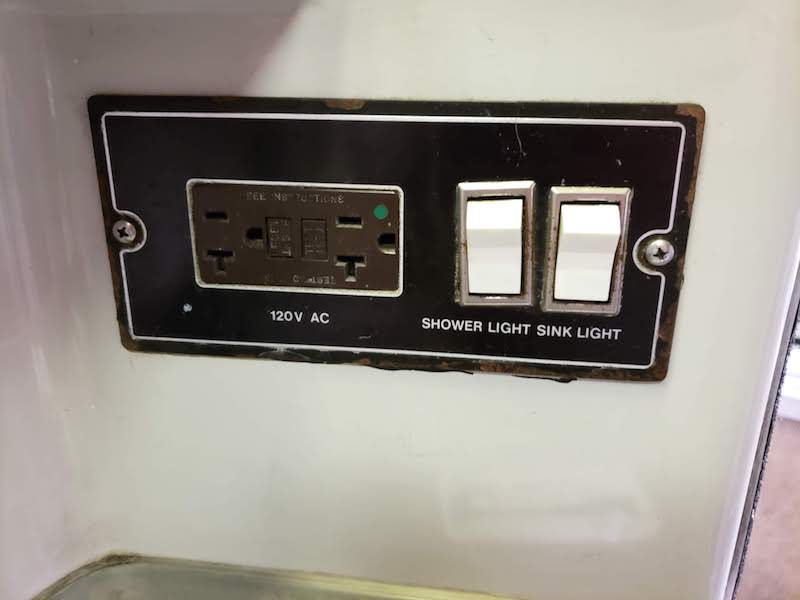 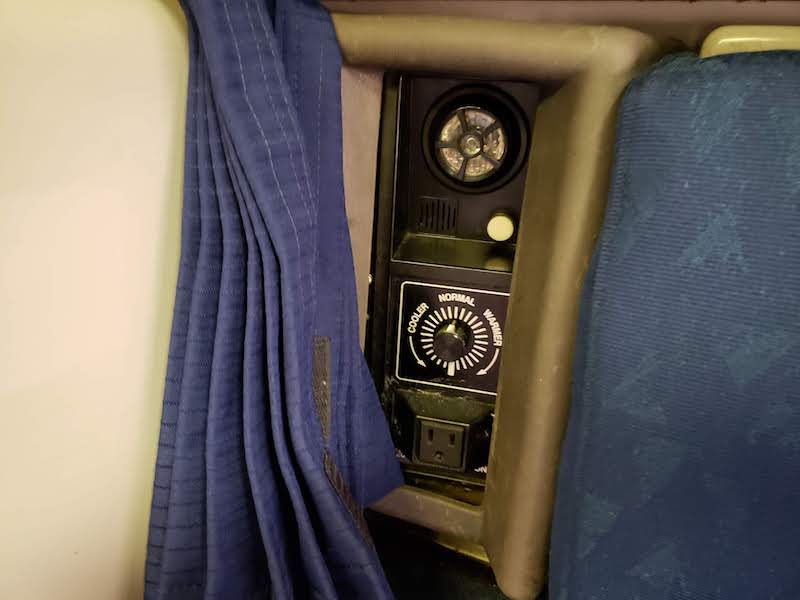 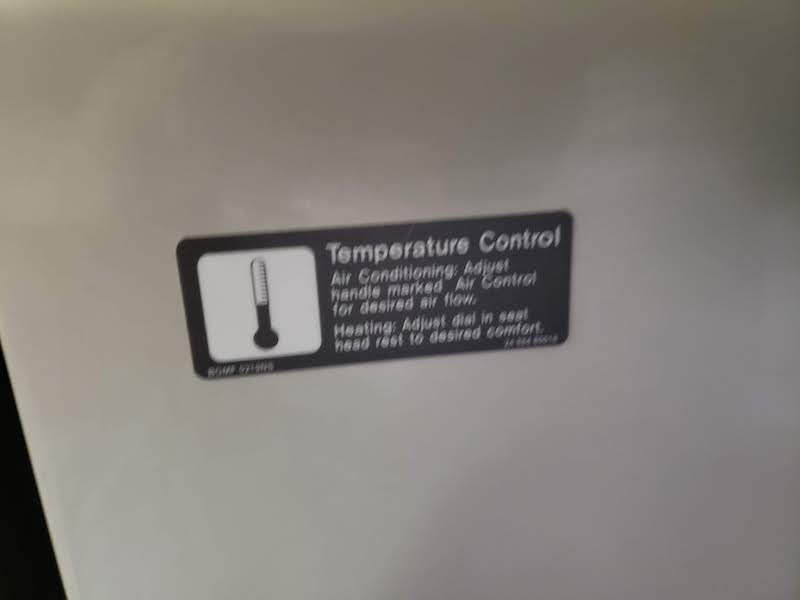 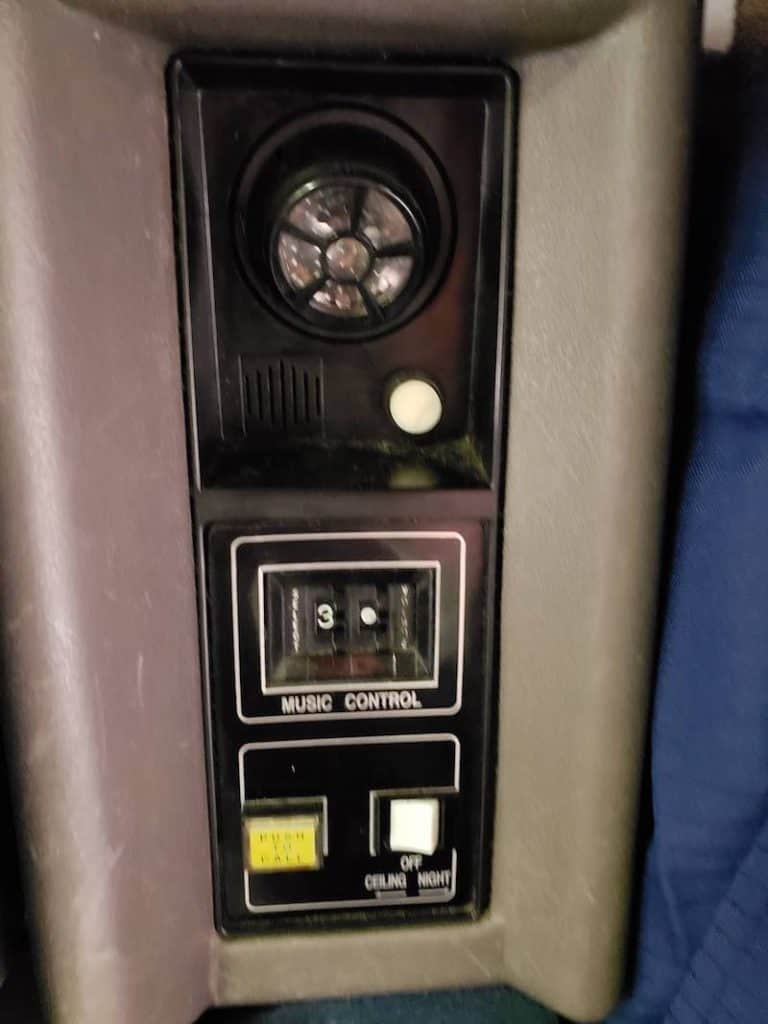 At night the train agent converts the lower bunk into a double bed.  If two (or three) were traveling in the bedroom, the top can also be made up as a bed. 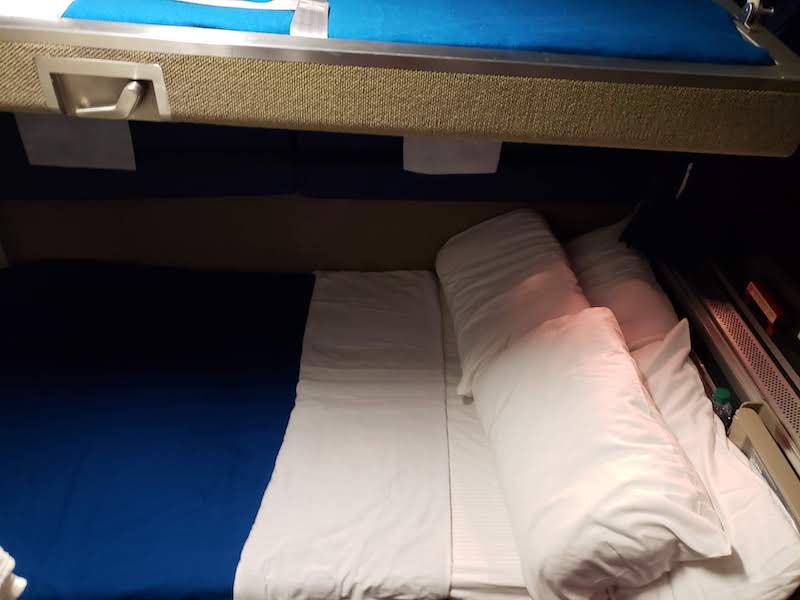 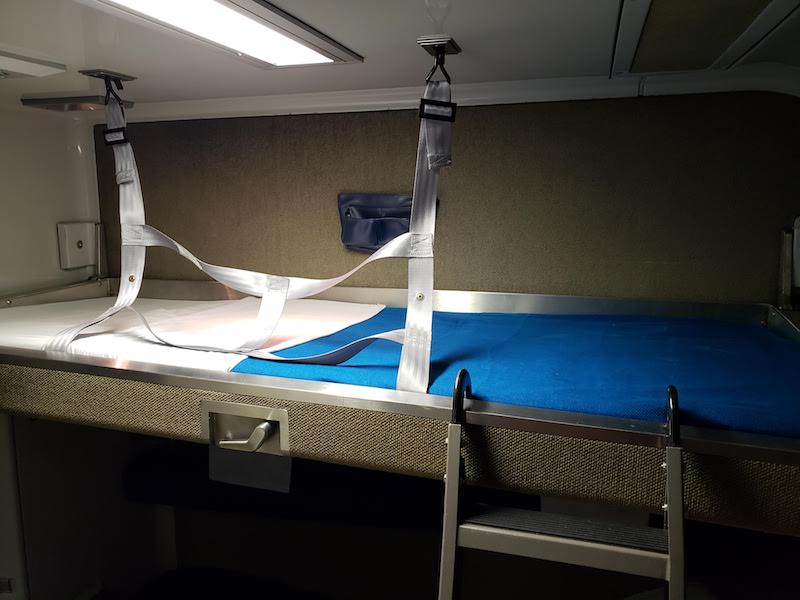 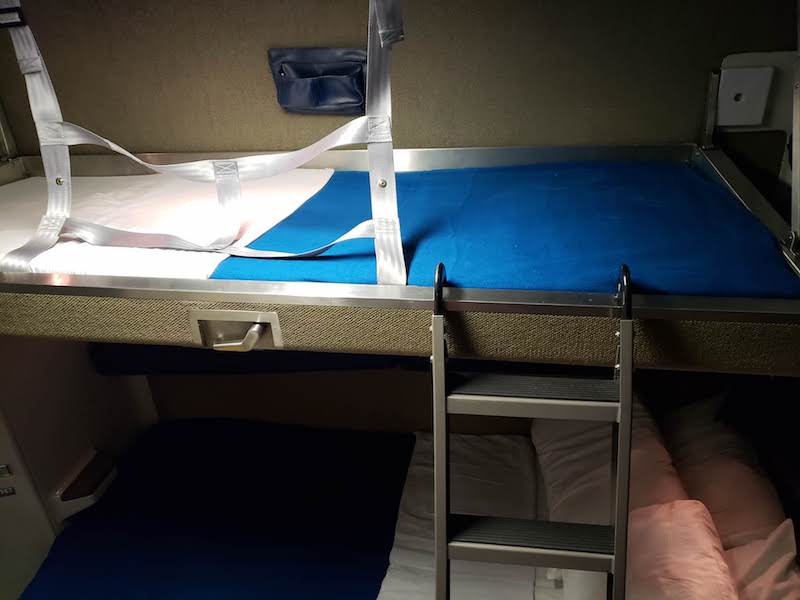 In addition to having a bed, bathroom and shower, those with a Bedroom booked (as well as Roomette) get all meals included in the dining car or delivered to your room.  You can read about the meal options and dining services and my review of the trip here.

Overall, having a Bedroom on the Superliner is a very comfortable experience.  I didn’t sleep great but more likely that was due to sleeping  a new environment.  It is definitely the best way to travel on train the US.  It is an old product that hasn’t been updated very much.  If you have the points or find a good cash deal, it is definitely worth booking.  And if you are traveling with a companion, the price is even more reasonable as the second person only needs to pay for the equivalent of a standard Coach ticket to join you in the room and for all meals. 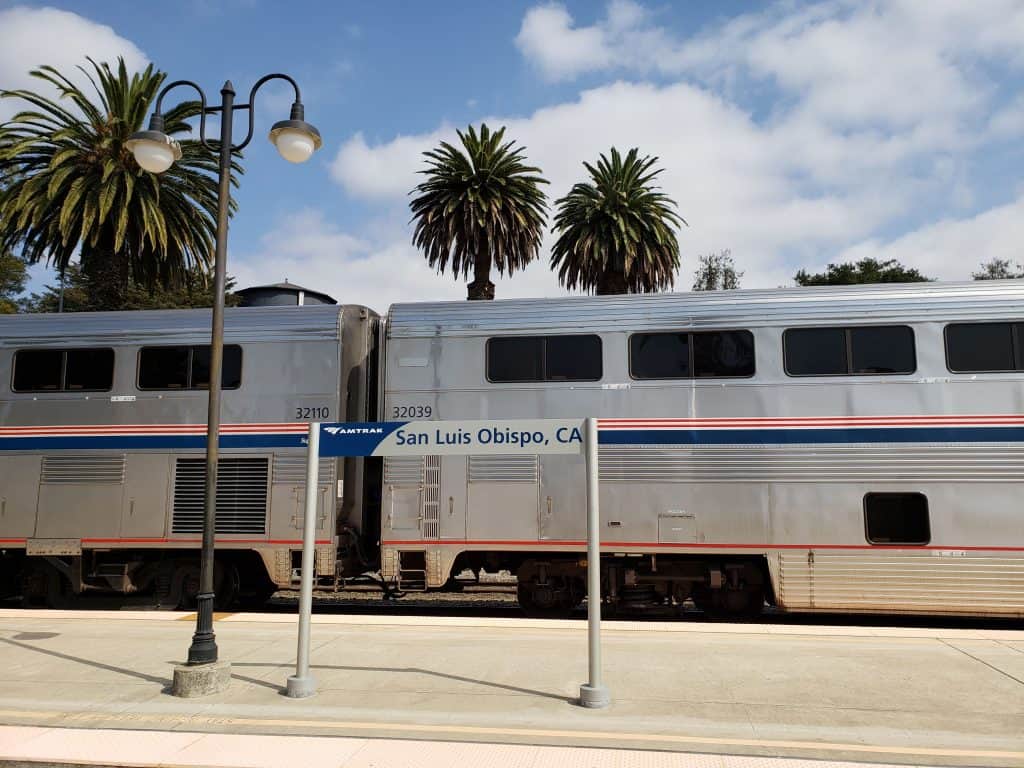