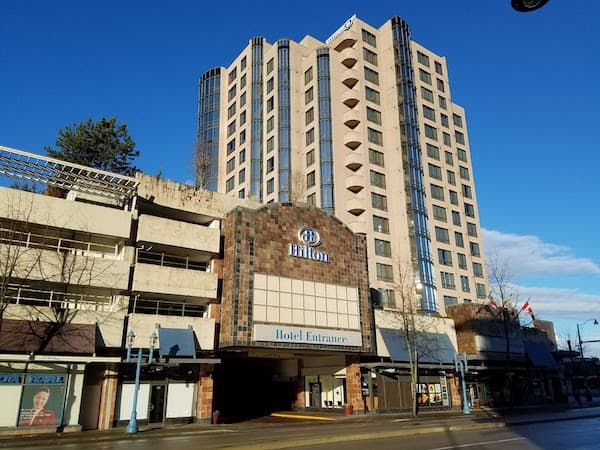 After arriving around midnight in Vancouver after my fantastic flight on Cathay Pacific, I hoped on the shuttle and was taken to the Hilton Vancouver Airport.

Located about 6km from the airport, the shuttle ride takes about 15 minutes.  It is south of downtown Vancouver in Richmond along the Fraser River.  It is a few blocks from the Olympic Oval where speed skating events were held during the 2010 Olympics.

I was only staying for a quick layover.  I arrived around 1am and checked out around 10am.  There was no one in the lobby when I arrived, but the night manager greeted me shortly and checked me in.  I was staying on a free night and they upgraded me to a King Bed Junior Suite.

It was also explained to me that there were water bottles in the room for me as a Diamond member and that breakfast is served buffet style at the restaurant in the morning.  There is no executive lounge.

The lobby is very basic and it isn’t clear where the front entrance is.  The front desk is nearest the undercover car entrance.  It is not a grand lobby at all. 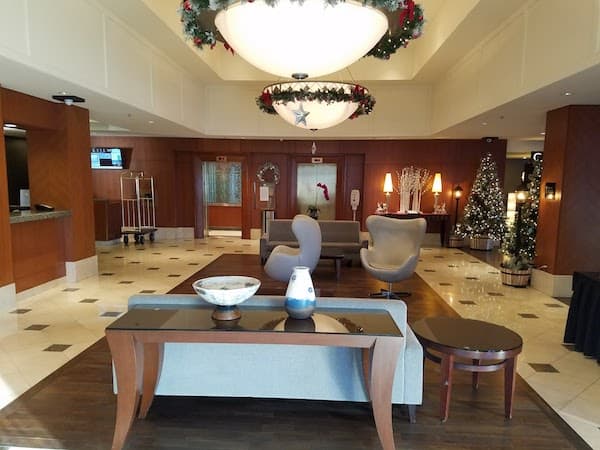 I was assigned room 1710.  There are a total of 18 floors so I was near the top.  Upon entering the Junior Suite, you are in the living room area.  There are no windows and it isn’t really an area I would want to hang out in, even if I had more time. 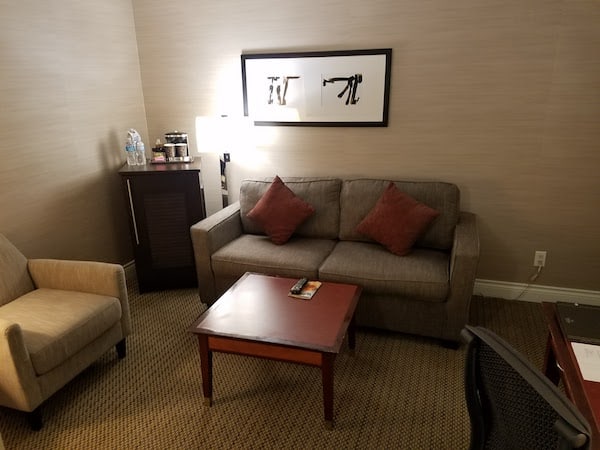 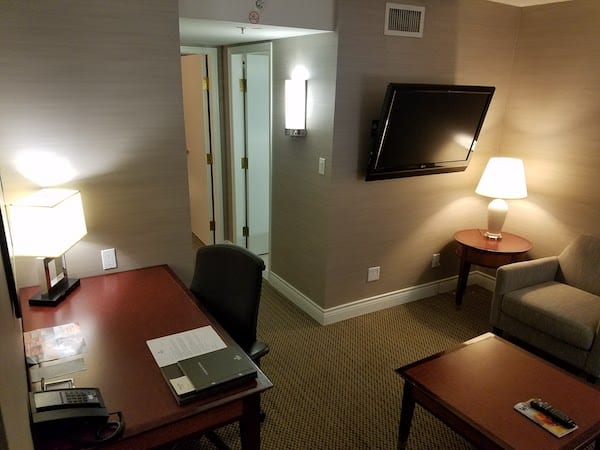 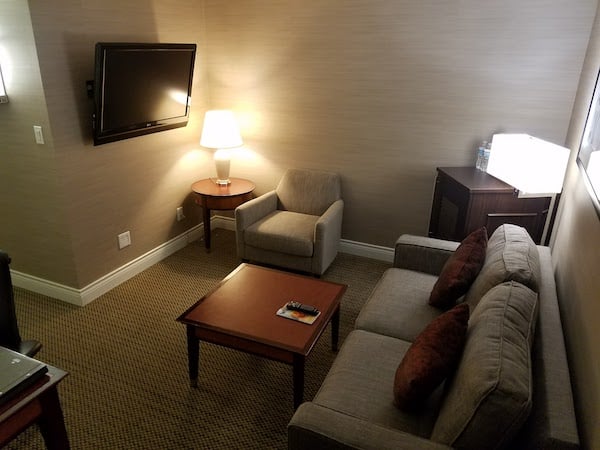 There is a basic desk in addition to a small couch and arm chair.  In the corner is an empty mini fridge and coffee maker. 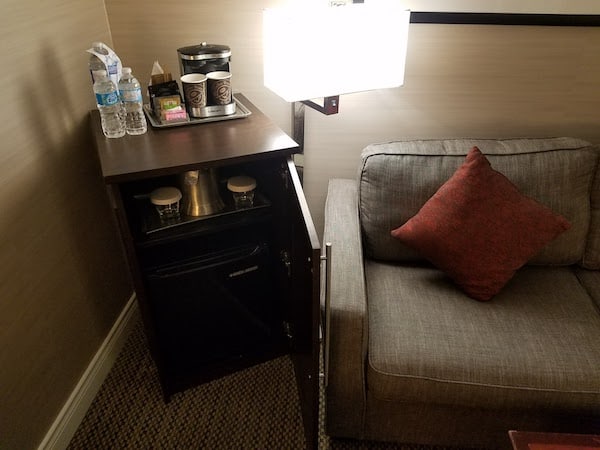 As you walk towards the bedroom the bathroom is on the right and a large closet is on your left. 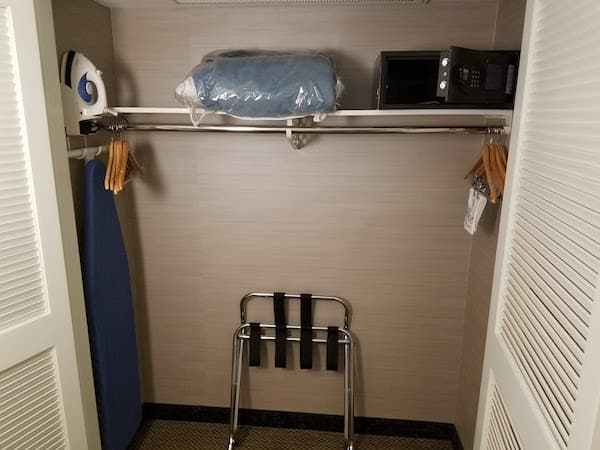 The bedroom is a true separate room with door.  The bedroom is actually quite nice with floor to ceiling windows.  The hotel was likely built in anticipation of the Olympics, but the decor has been redone since (in 2015 according to the website).  Overall a typical airport hotel. 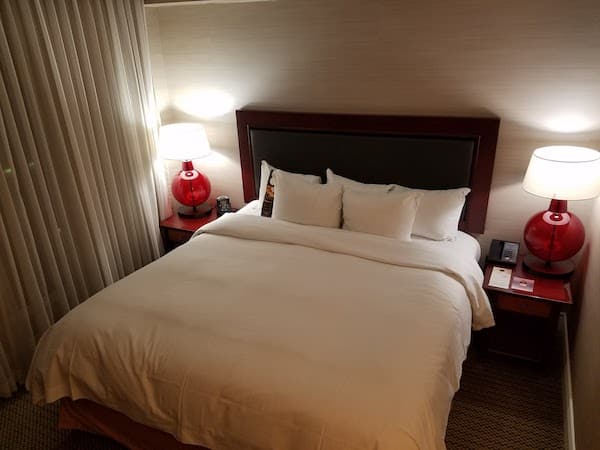 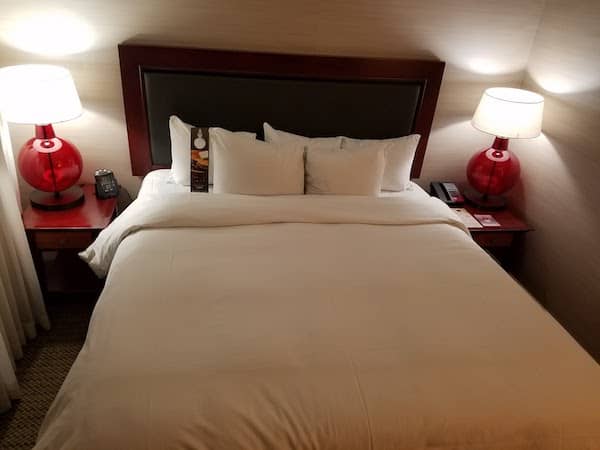 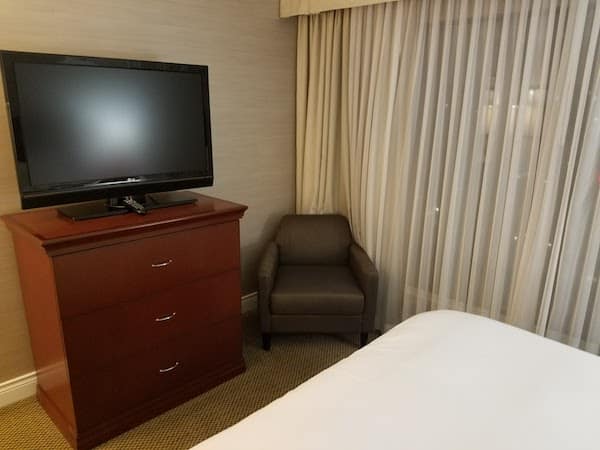 I had a room that faced north towards Vancouver and had a good view of the mountains beyond the city. 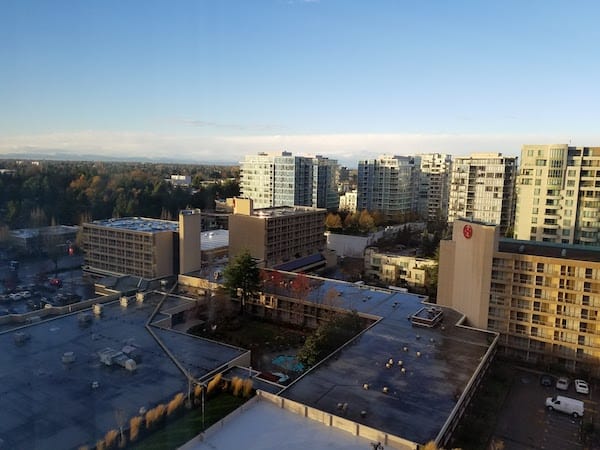 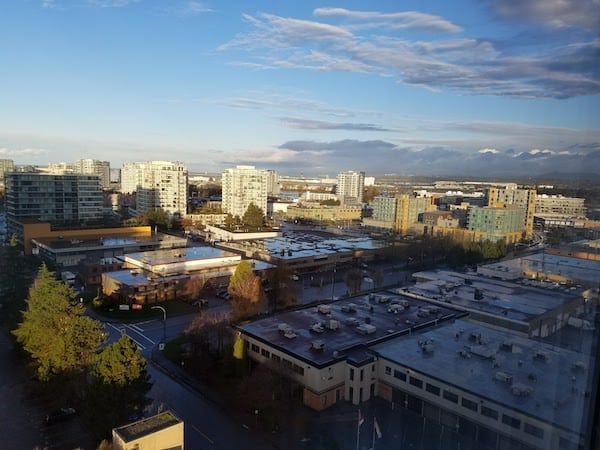 The bathroom is quite small and basic but very clean.  The bath and shower are behind the door when it is open and you have to maneuver a bit to get in.  A single vanity sink is against the other wall. 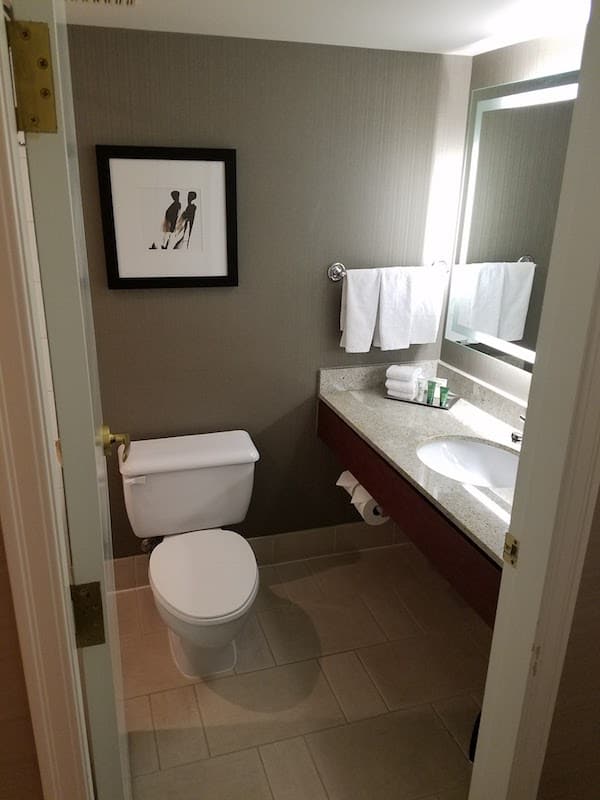 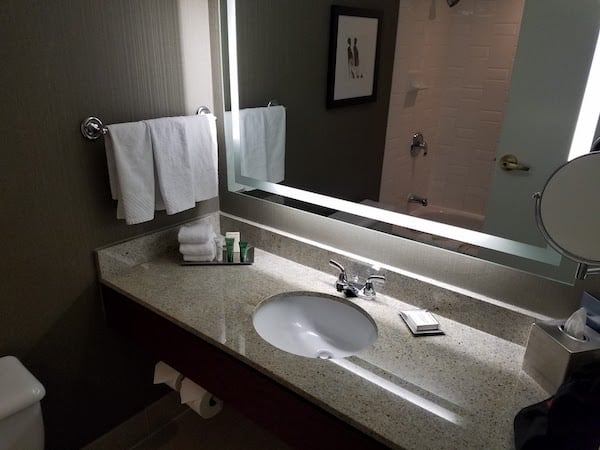 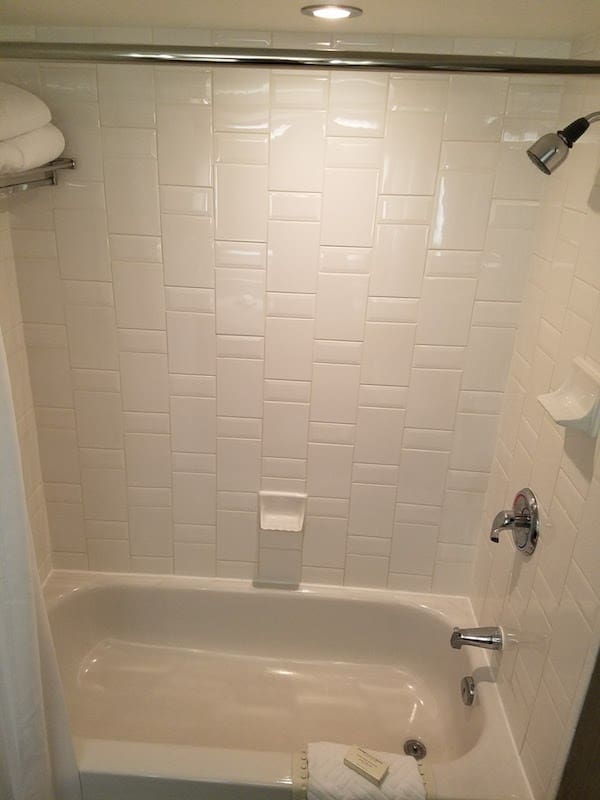 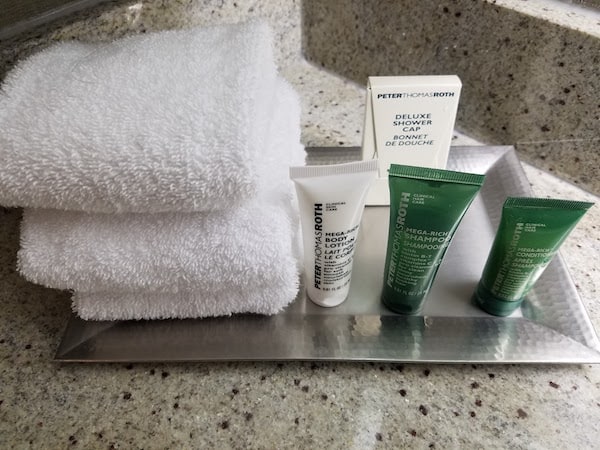 The pool and gym are located on the 5th floor and, I believe, built out over part of the parking garage.  The pool is not scenic unless you like empty parking lots. 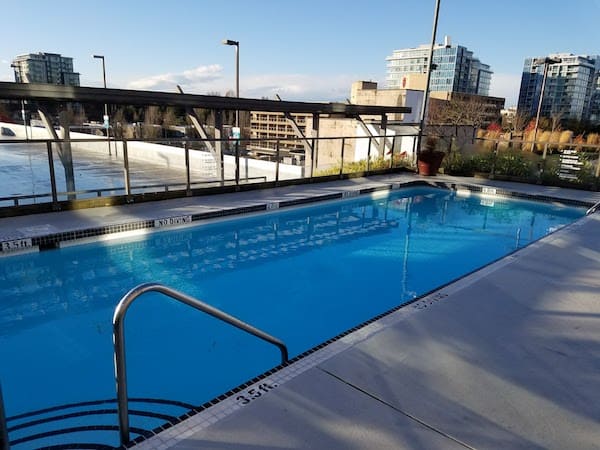 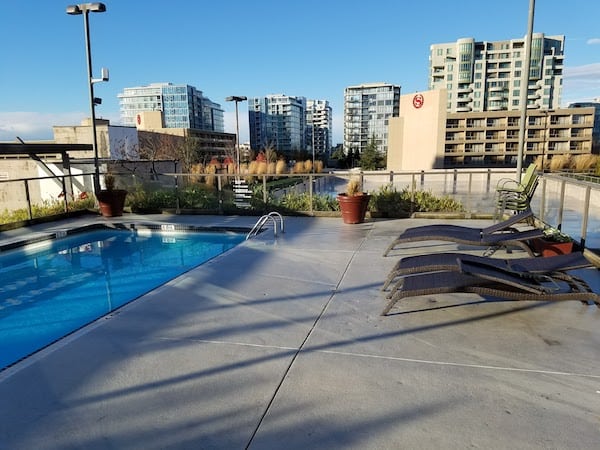 There is a small hot tub inside between the pool and gym. 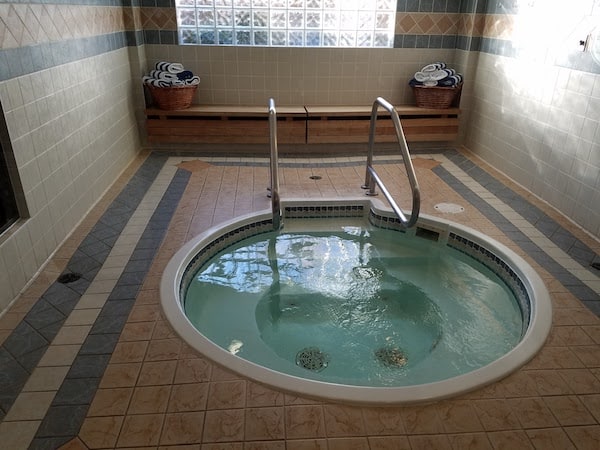 The gym had very limited (and slightly dated) equipment. 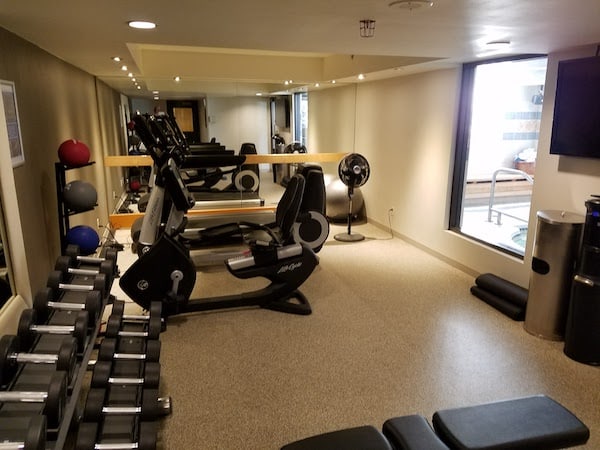 Breakfast (included for Diamonds) is served in Cavu located off the lobby.  If you are not an elite, the buffet will cost you $22 CAD.  I was not very impressed by the service (there was no one at the front desk when I arrived and had to go find a server for my drink order) or by the food.  They did have some large cinnamon rolls, but besides that it was pretty basic hotel buffet breakfast like you would find at a low end chain.  Being Vancouver, there were some Asian options.  I noticed a number of international flight crew eating breakfast so the property must have a contract with airlines. 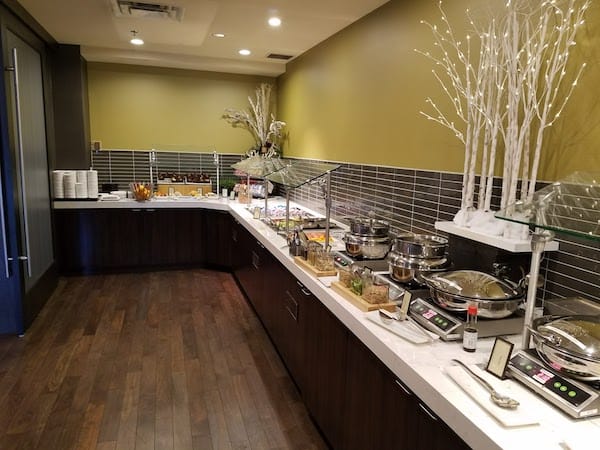 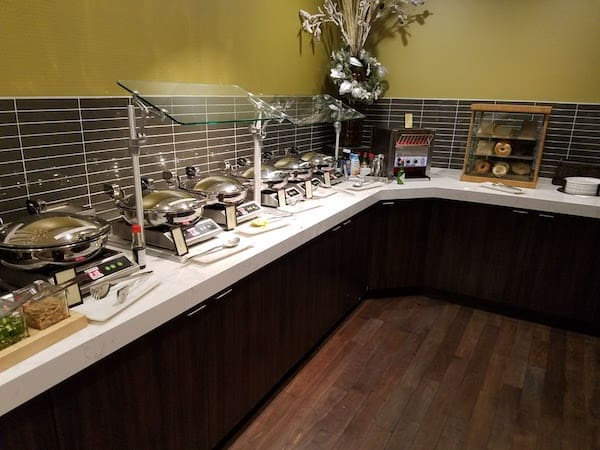 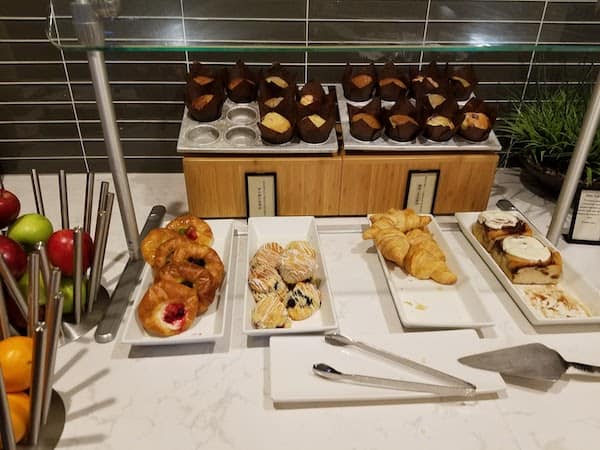 Bottom line, this is an airport hotel.  The hotel shuttle is free but it also serves two other hotels in the area and Hilton is the first pick up.  So give yourself 20 minutes or so to get to the airport.  The Fairmont Hotel is located in the airport and is much more convenient (but also more expensive).  Honestly, if I was to have an overnight layover in Vancouver again, I would either stay at the Fairmont in the airport or, if I had time, stay at a hotel downtown.

Still, the Hilton Vancouver Airport is a clean hotel and there is nothing bad I can really say about it.  It just is completely forgetable. 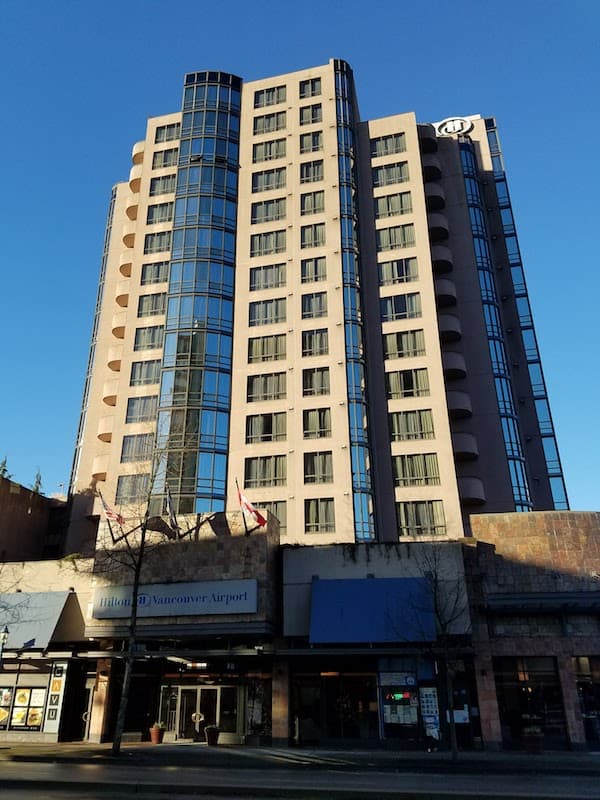