After my night at the Four Seasons, I knew I wanted a night in the city.  As it was Pride weekend, I thought it would be fun to stay close to the parade route.  The Hyatt Regency San Francisco fit that bill.  I booked the room with points (20,000 World of Hyatt points) which is a lot for a Regency property but being Pride weekend a cash reservation was well over $300. 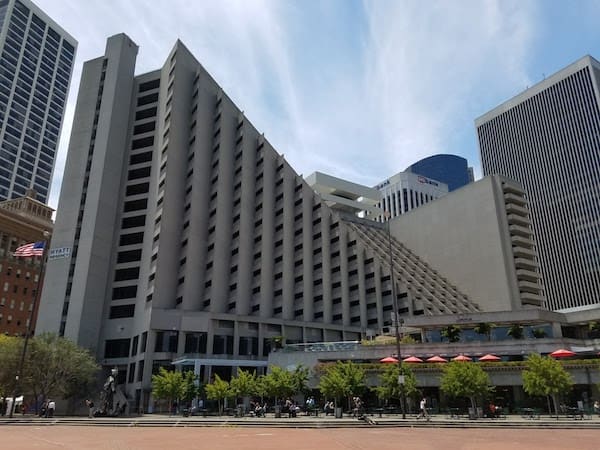 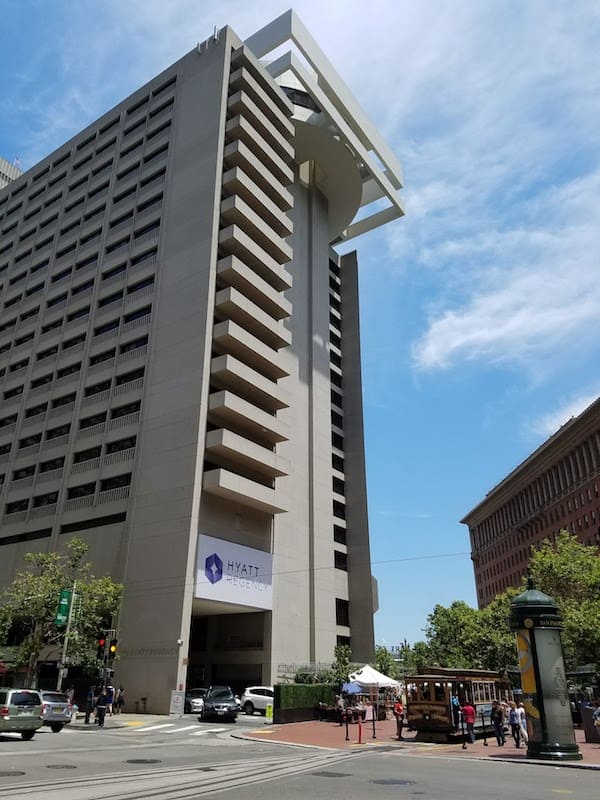 The Hyatt Regency San Francisco is located in the Financial District by the Embarcadero BART station on Market and Drumm St.  It is right across from the ferry terminal and very accessible with public transportation.  The neighborhood doesn’t have much character but if you are doing business or a tourist, it is a fine location.

As I said, I stayed the Saturday night of Pride.  In addition, there was a conference going on at the hotel.  Still, the Hyatt Regency San Francisco is a huge hotel.  There are over 900 rooms in the property.  I arrived at noon, before standard check in time.  Still, they had a room ready for me.  I used a Club lounge access award to get access to the Regency Club.  During check in I was given info about the Club.  While the check in was efficient, I was given all the info I needed.  I was also given a coupon for my free bottle of water.

The lobby is at the end of the atrium near the elevators.  Getting into the actual hotel is a bit tricky.  The lobby is on the second floor.  It is not a very inviting building form the outside.  But the atrium is quite grand.  I understand it is the biggest atrium for a hotel in the world.  Or something along those lines… 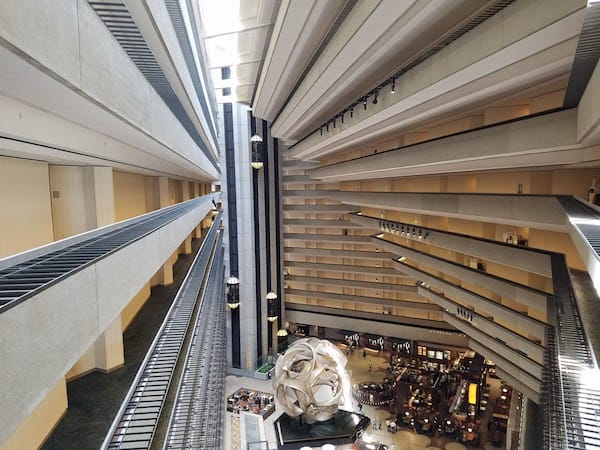 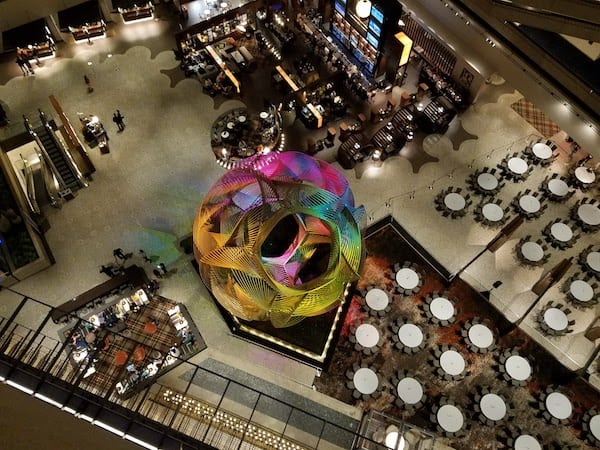 My room was a standard room.  It did not have a balcony, some of the view rooms do.  As you enter the bathroom is on your right.  The rest of the room is straight ahead.  It is shaped like a triangle and is a pretty standard size hotel room. 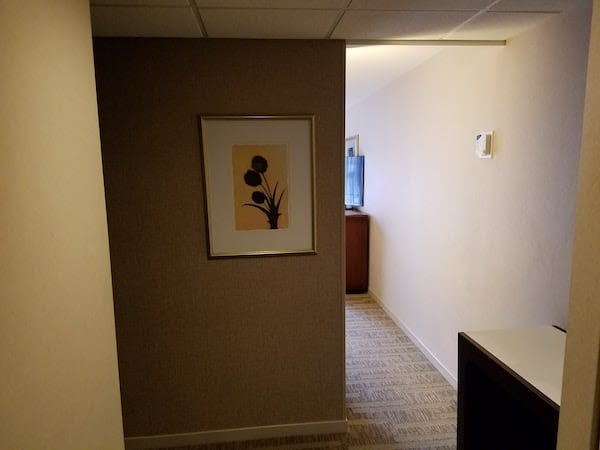 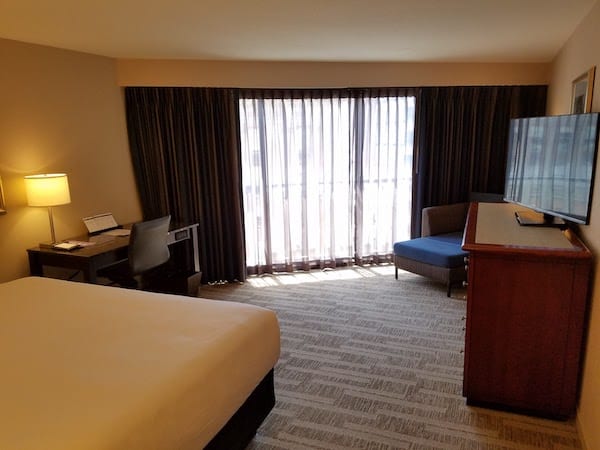 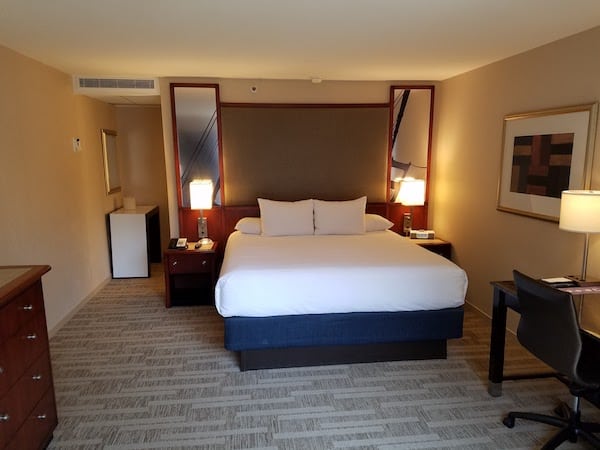 On one side is a standard desk and chair. 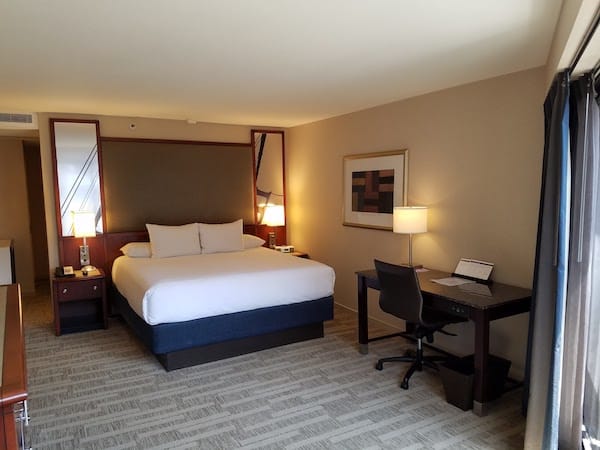 On the other side is the TV and an arm chair. 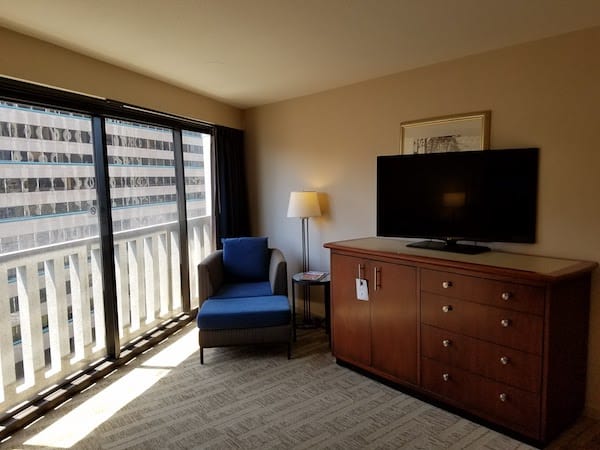 Under the TV is an empty mini fridge and coffee maker. 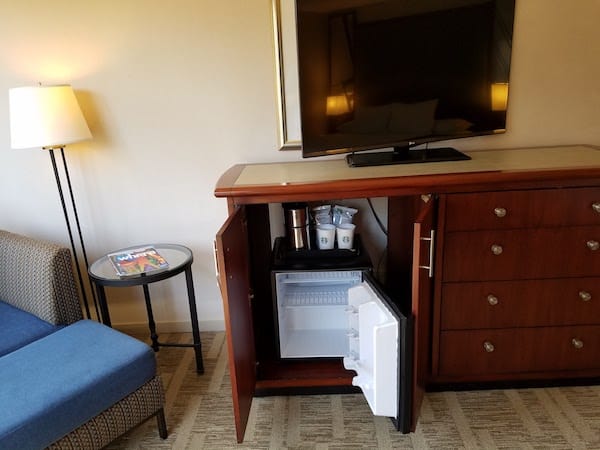 I had an angle view of the bay.  Even though I looked straight at another building across Market, my room had plenty of light. 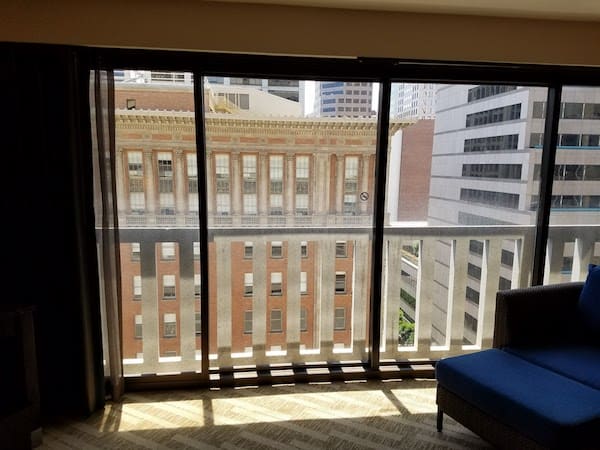 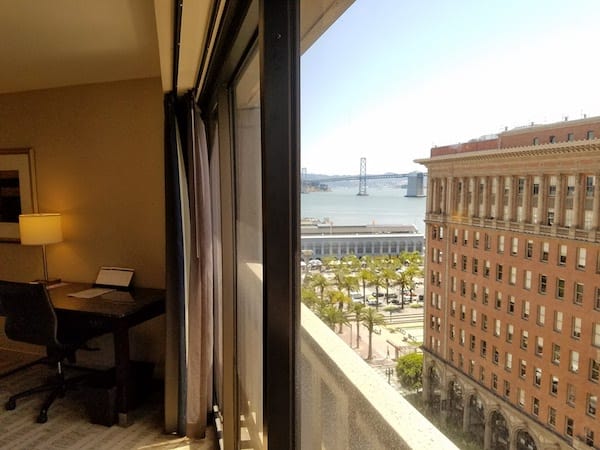 Back in the entry way was a small table and closet. 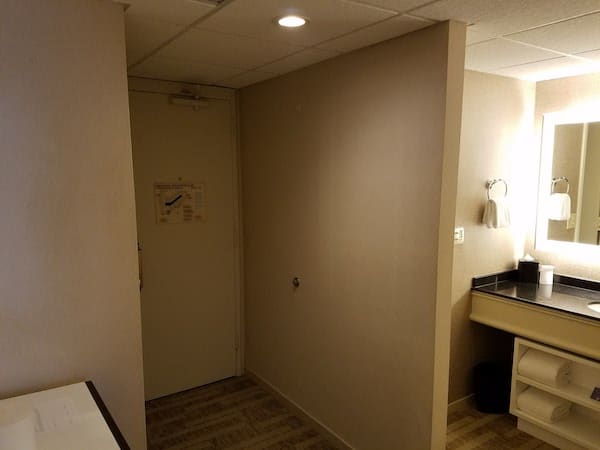 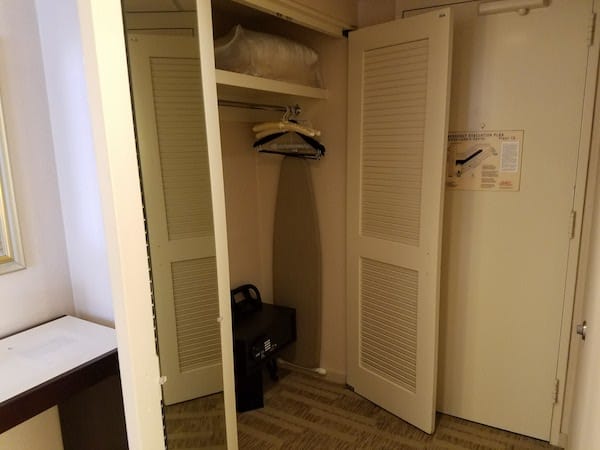 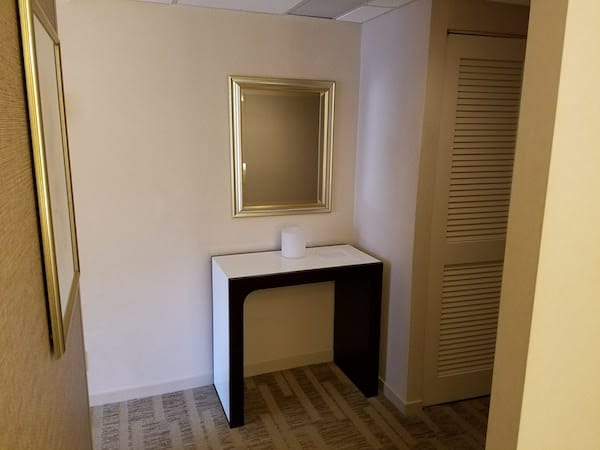 The bathroom is quite small.  The vanity is open to the entry way.  The toilet and shower are in the enclosed bathroom. 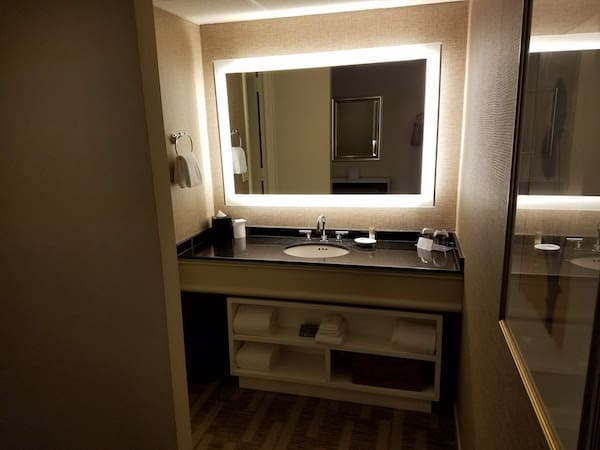 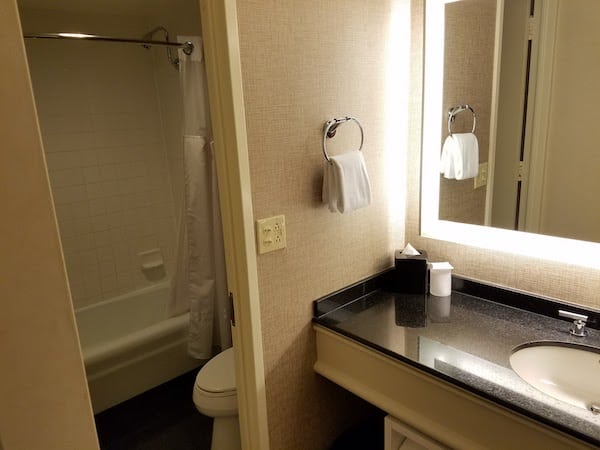 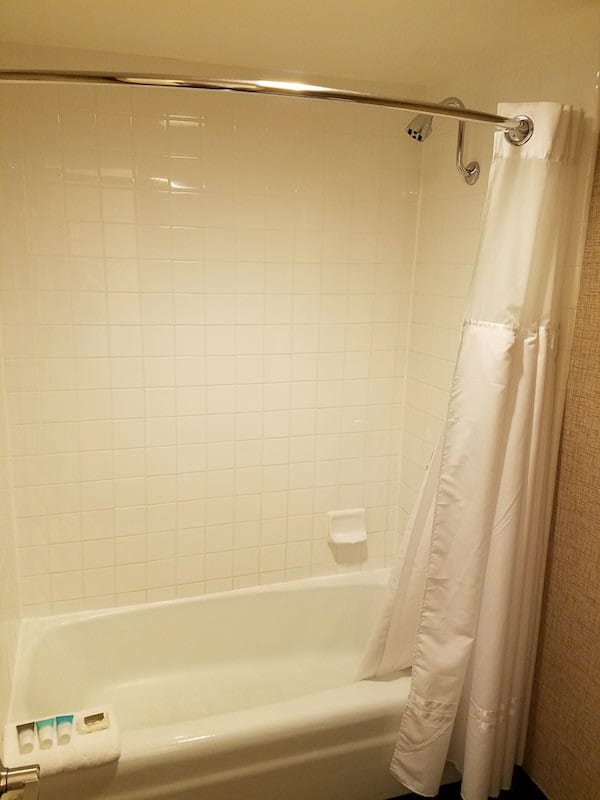 The bath amenities were the standard Dr. Kennet MD.  The shower/bath combo was dated but the water pressure was good.

I found the Regency Club at the Hyatt Regency San Francisco to be one of the best I’ve been to in the US.  It is in the location of the former rooftop restaurant.  It was a revolving restaurant so the Club is circular in shape.

When you do make it to the Club, the elevator opens into a lobby area.  You sign in on a tablet and then enter the dining area.  The Club has recently been renovated and is lovely. 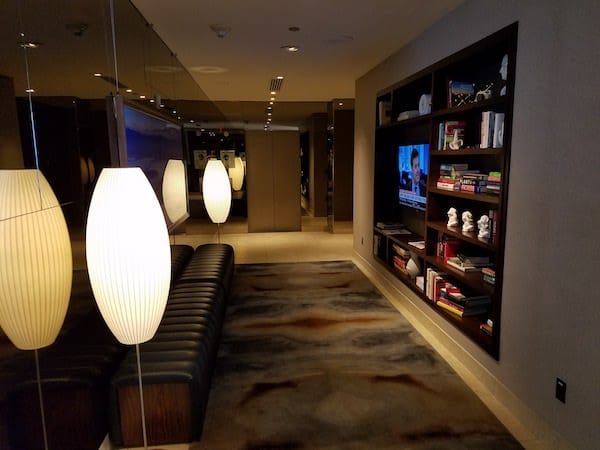 The buffet area has the standard coffee, juices and soda during the day and an honor bar at night.  During the evening happy hour there is a decent variety of food — I ended up eating dinner there.  Salads, pizza, etc. 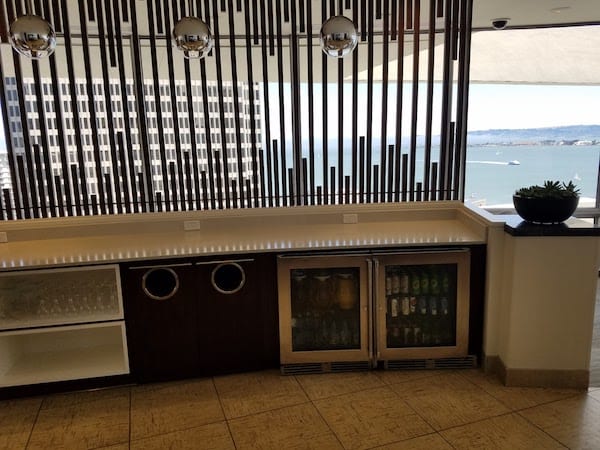 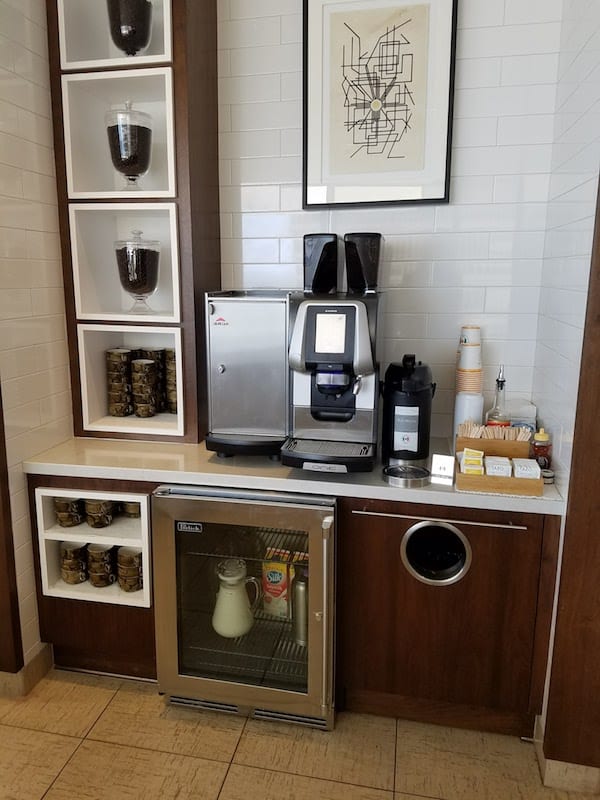 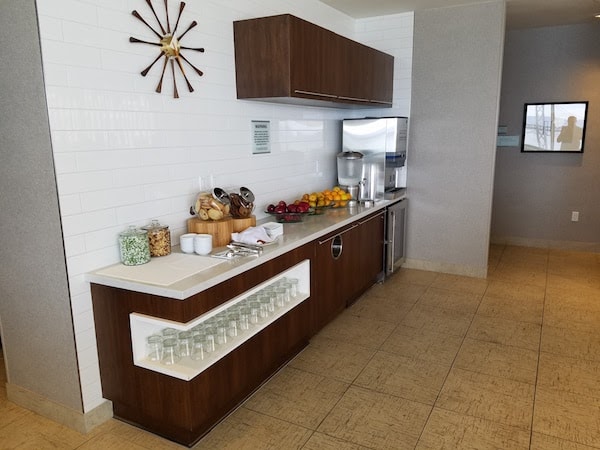 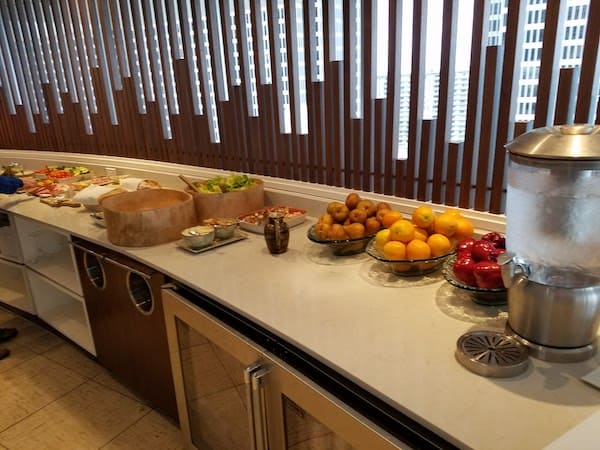 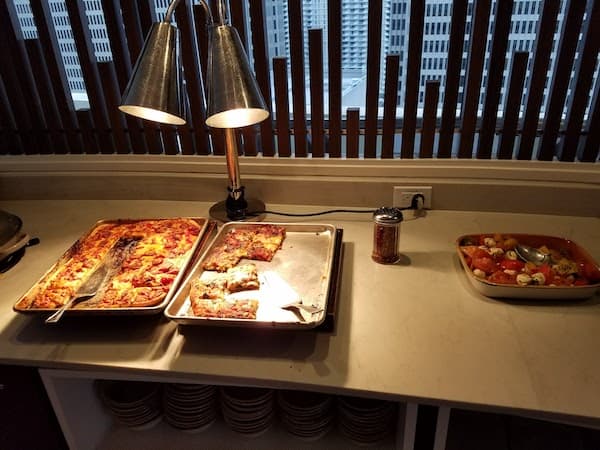 Of course the best part of the Regency Club is the views of San Francisco Bay. 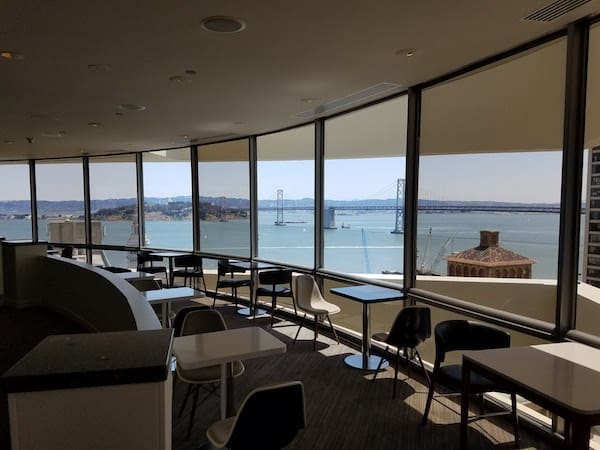 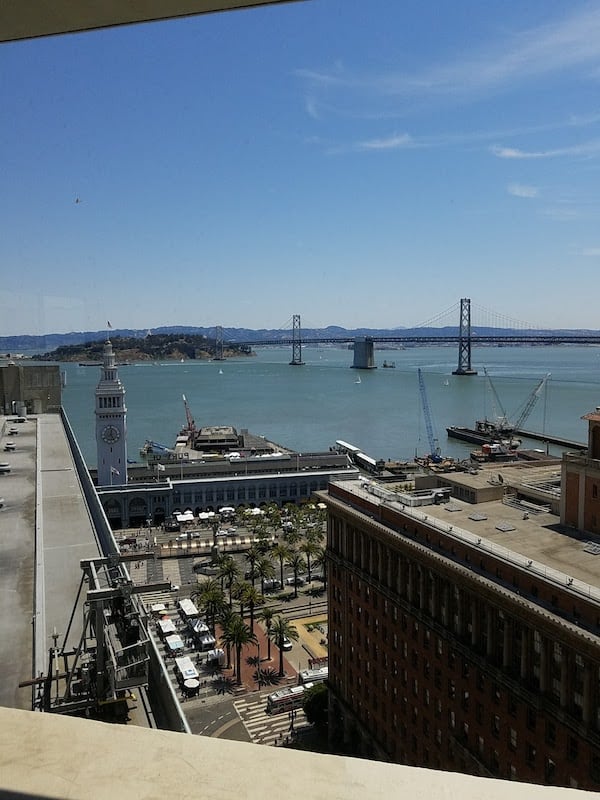 There is a ton of seating; even during the busy evening rush I had no problem getting a seat.

I also found the staff, especially Conception, to be extremely attentive and helpful.  More than any other US lounge I have visited.

About the only other amenity in the hotel is a fitness center on the main floor.  There is no swimming pool.

Besides the great service in the Club, I found the Hyatt Regency San Francisco to be quite well run.  Since streets were going to be closed from Pride, a letter was left in my room explaining other options. 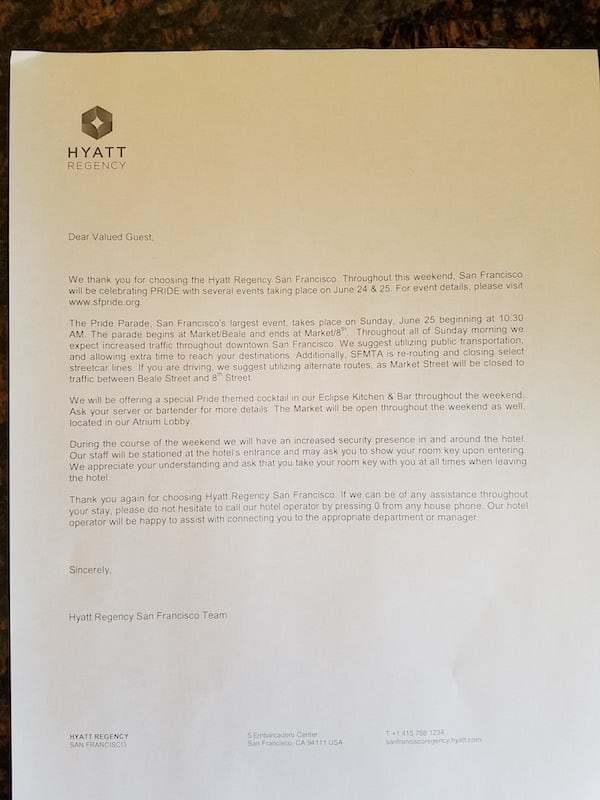 All staff I interacted with were friendly and efficient.  What you would expect from a Regency in a big city.

The Hyatt Regency San Francisco is a good option when visiting the city.  It isn’t memorable, but it is a well run hotel that has some great views.  20,000 points is a lot for a Regency, but being in one of the most expensive cities in the US means prices are going to match.  Worth asking for a balcony view room.