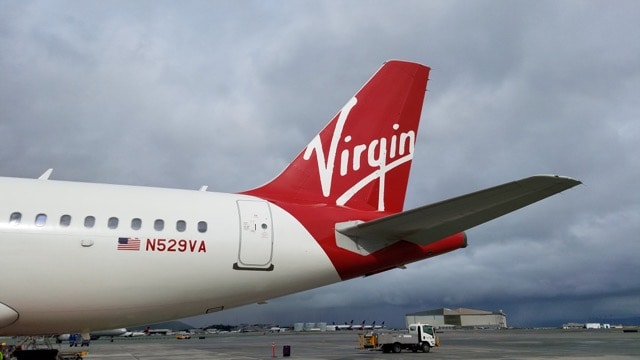 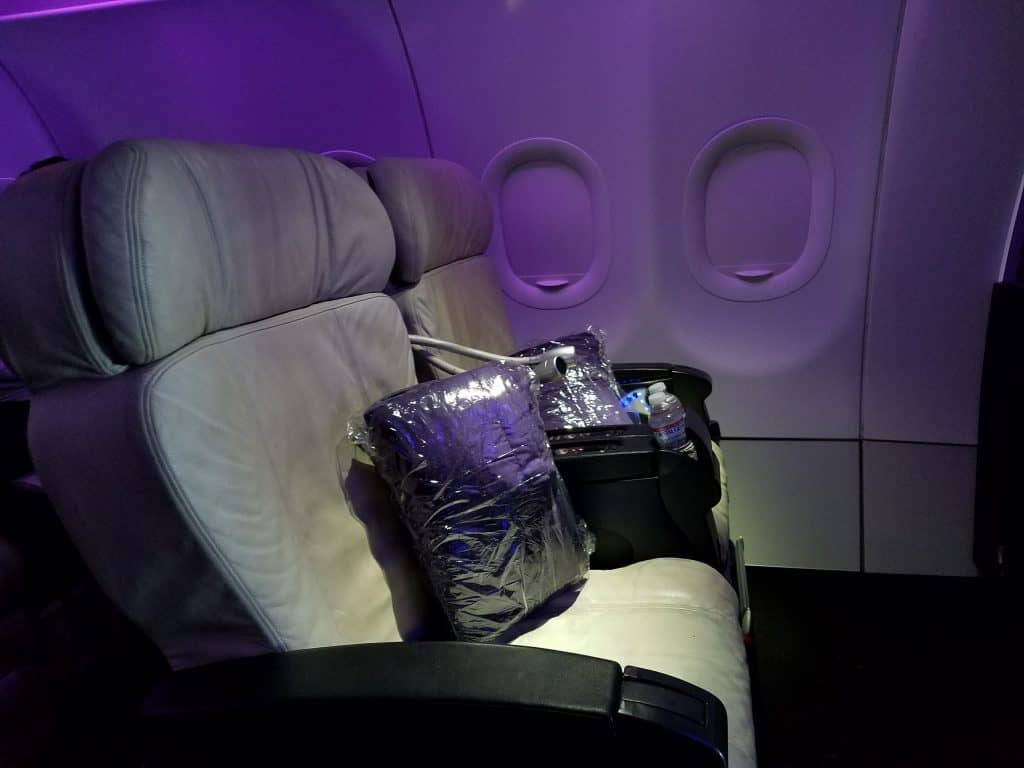 The pitch right now between Rows 1 and 2 is extremely roomy.  Even with the seat ahead of me fully reclined, I had plenty of space. 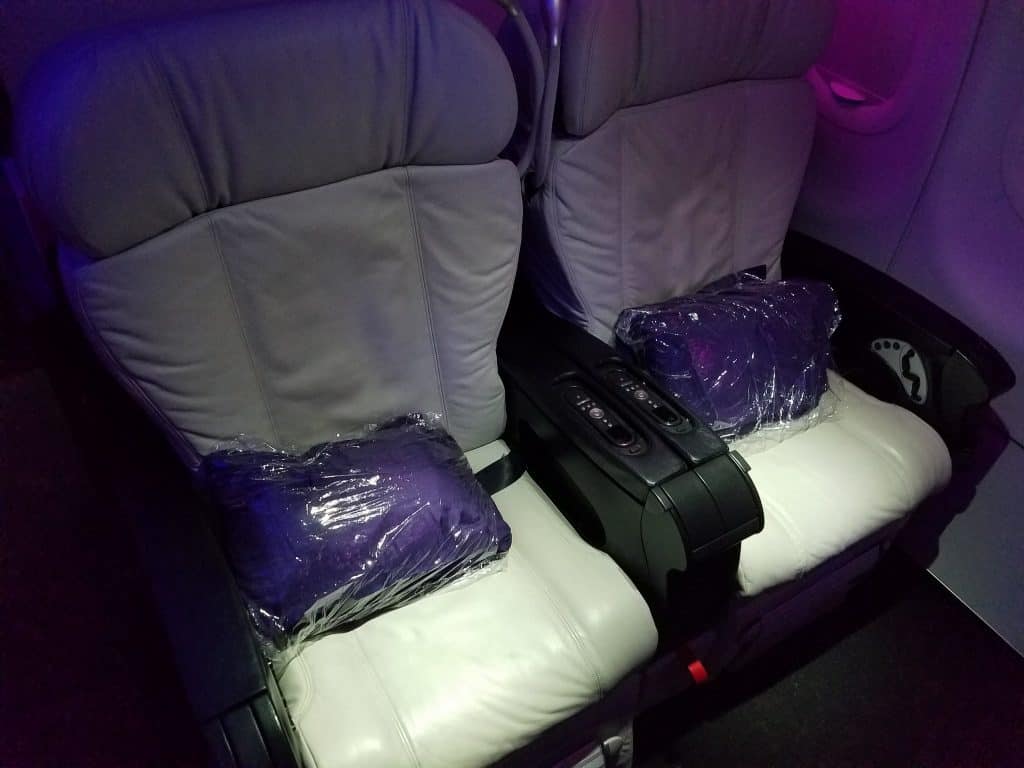 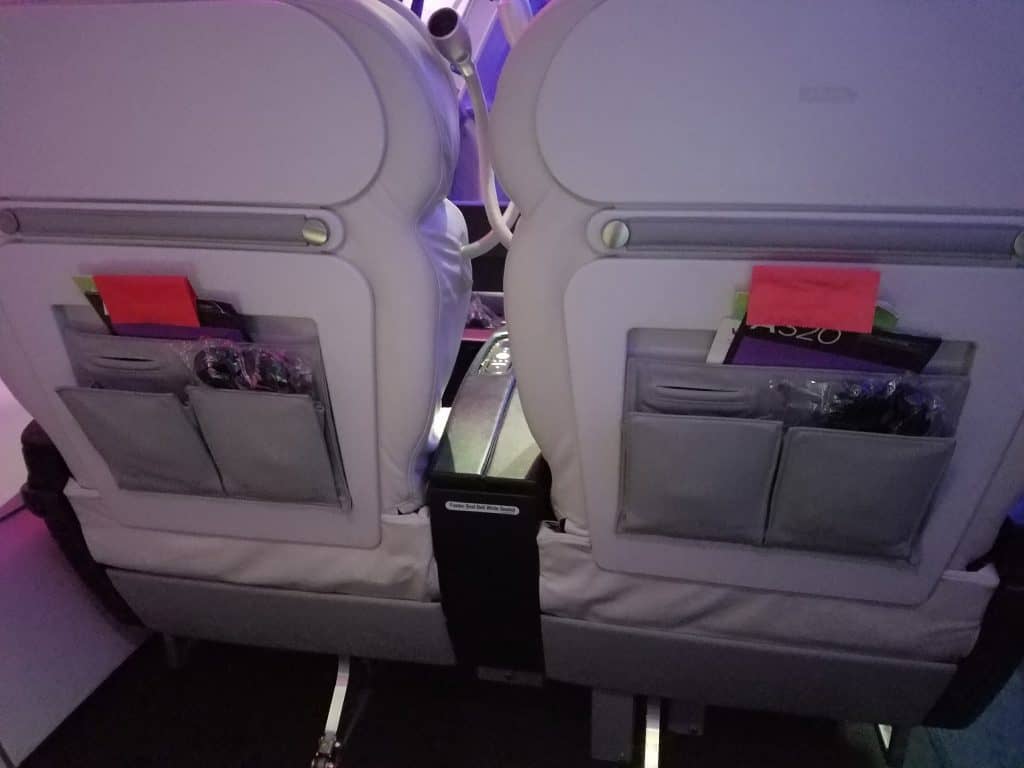 In front of Row 1 is a partial wall which means no room for storage.  Behind Row 2 is another partial wall that separates First and Economy, so reclining in Row 2 doesn’t have any impact on Row 3.  I flew Row 2 down to SFO and Row 1 on the return.  I found Row 2 to be superior.

The seats themselves are quite comfortable.  Each seat had a thick blanket and pillow upon boarding.  The IFE screen folds out from the armrest so you can’t use it until after take off.  There are controls for the TV in the armrest but I found using the touch screen more convenient. 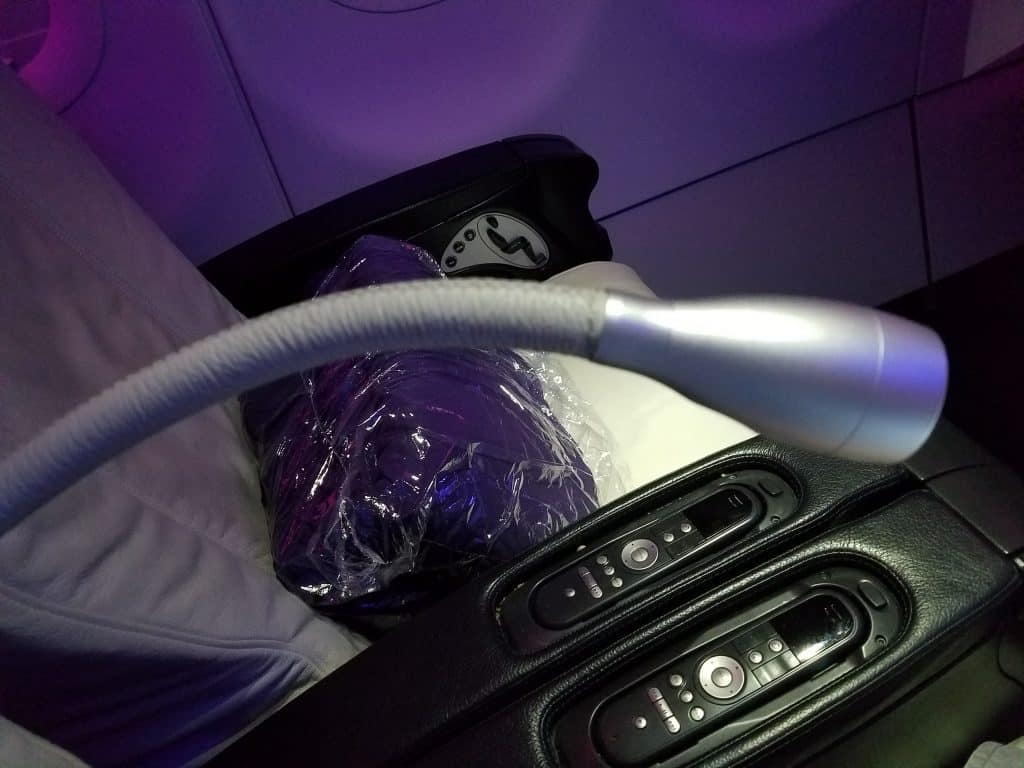 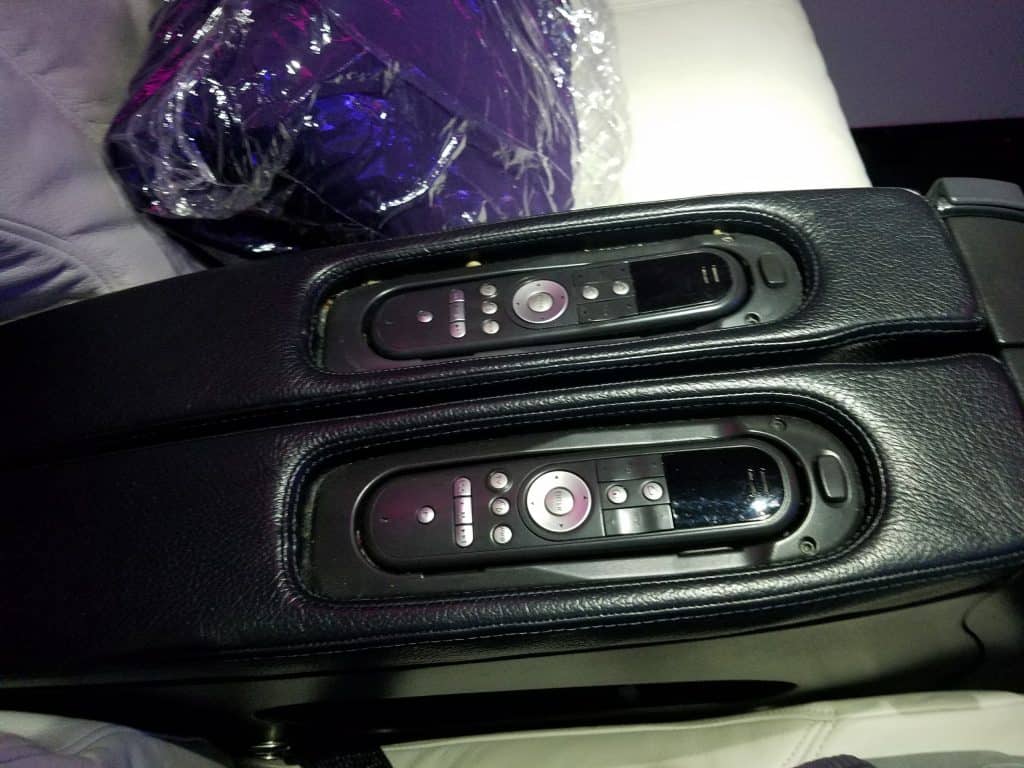 Each seat has it’s own bendable LED light in addition to the overhead light.

The controls for the seat are locate along the side of the armrest.  The seats can lean almost to angle flat when fully reclined.  The leg rest can also be raised and extended. 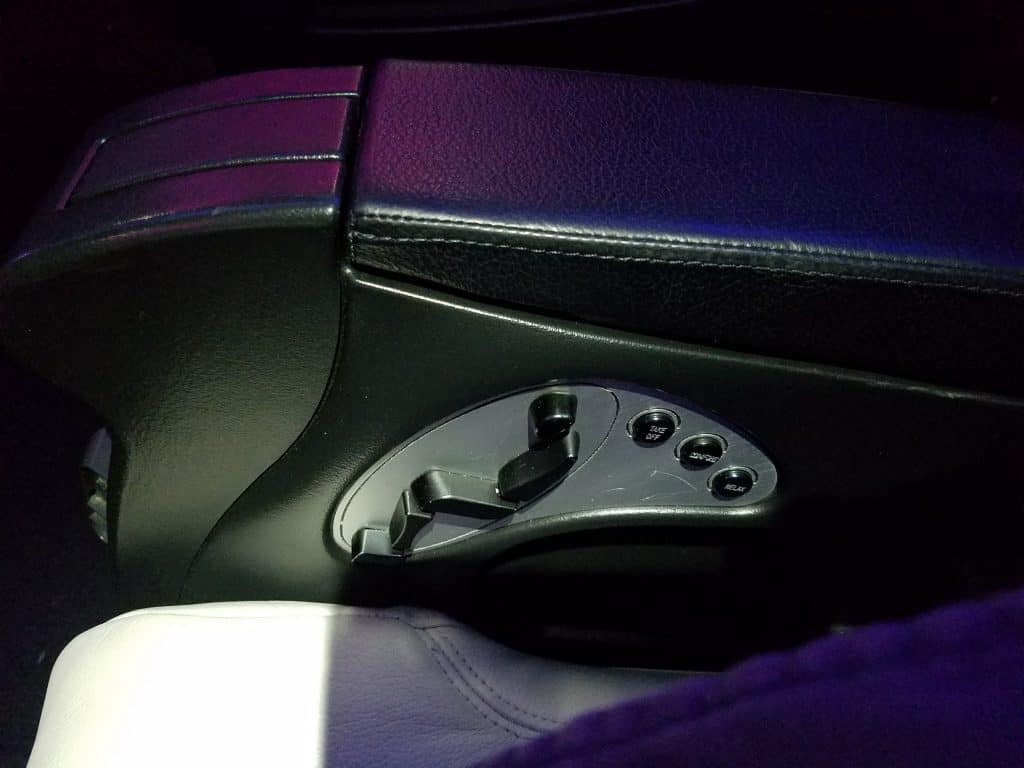 Even the tray table has been customized.  It took a neighbor showing me how to work it to figure out that there is a built in book/tablet holder.  The tray table folds in half at an angle for easy reading. 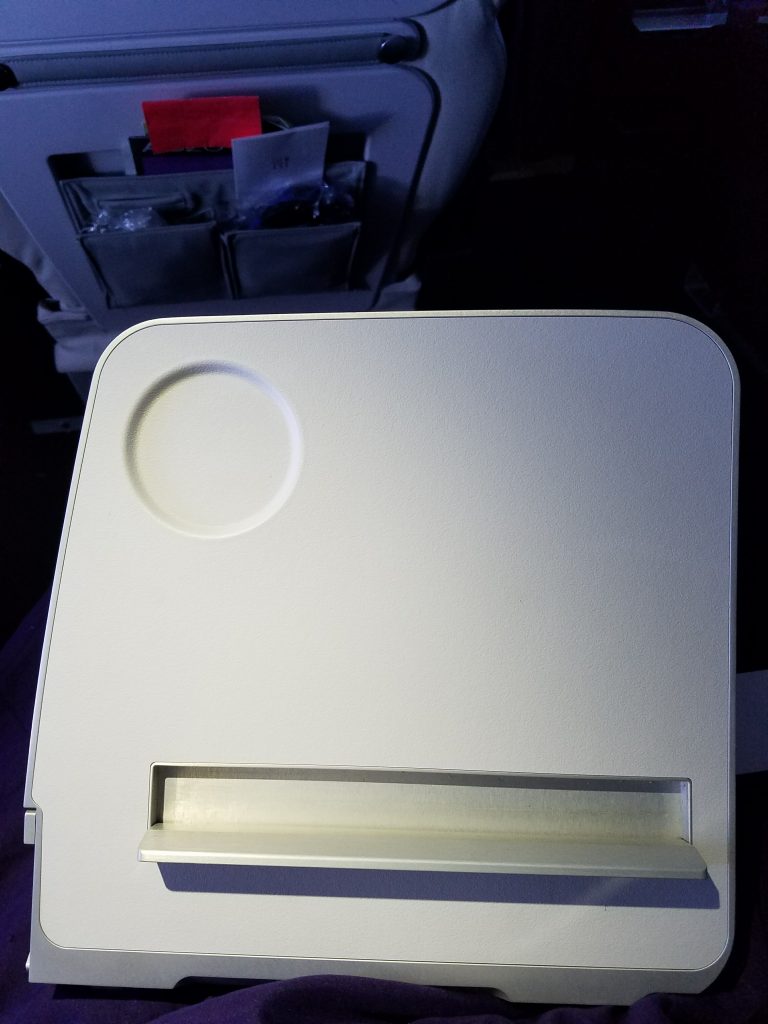 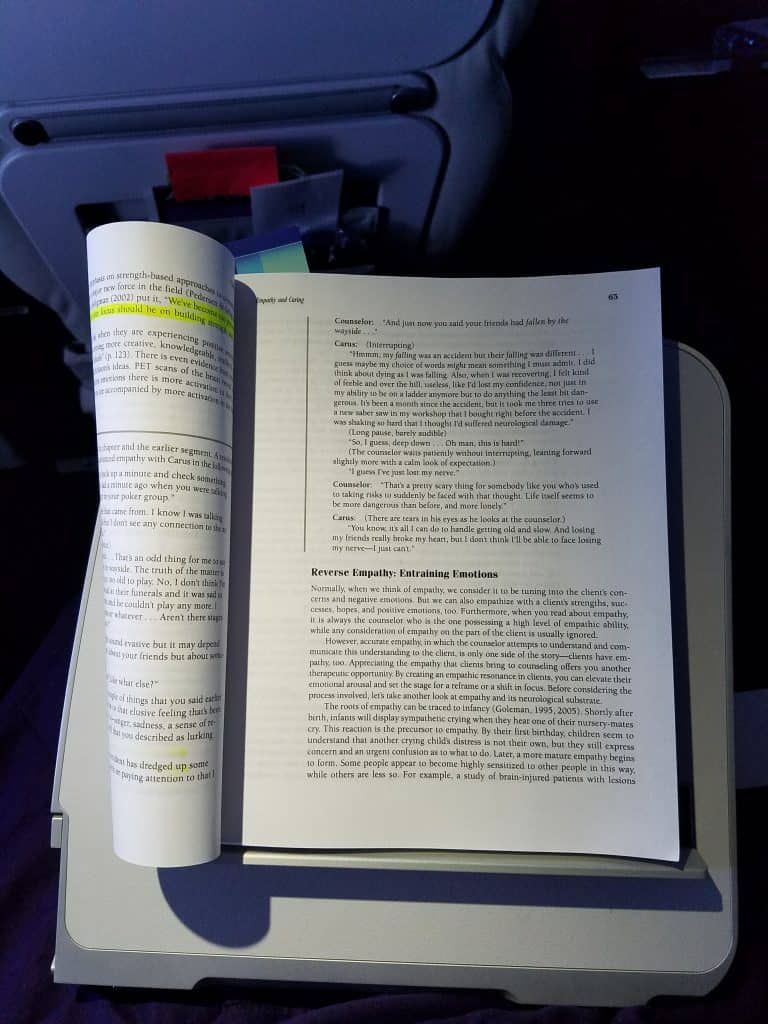 Even the seatbelt was shiny chrome. 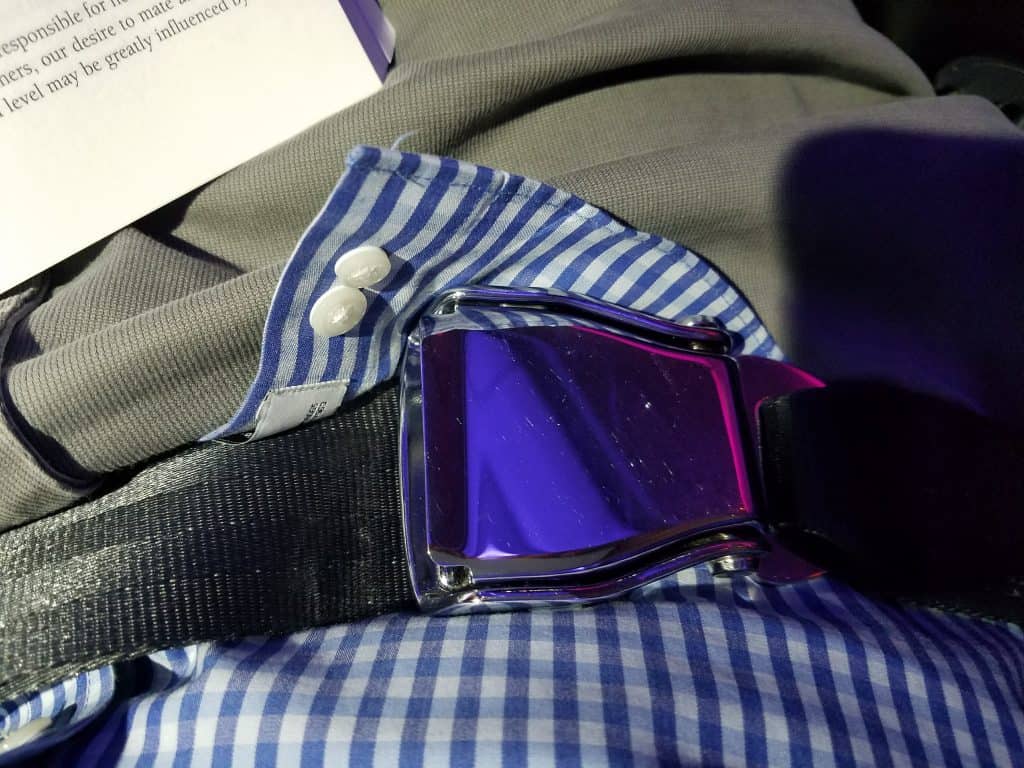 Pre-departure beverages were served in plastic cups while regular drink service once in flight was offered in glasses with colorful stir sticks. 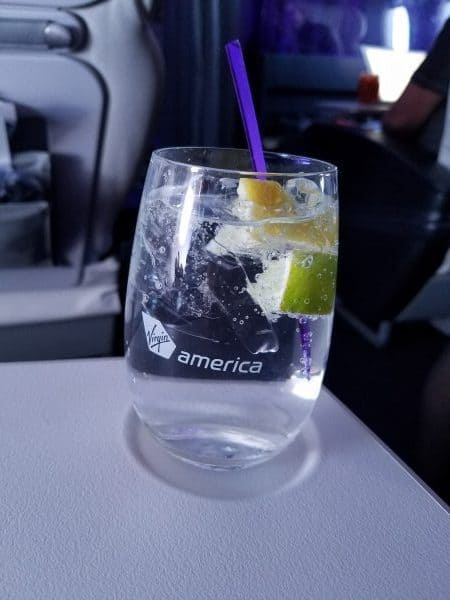 A late breakfast was served on the way down.  There was only one choice (they were out of the protein plate).  I found the presentation to be quite lovely but the quality was pretty mediocre. 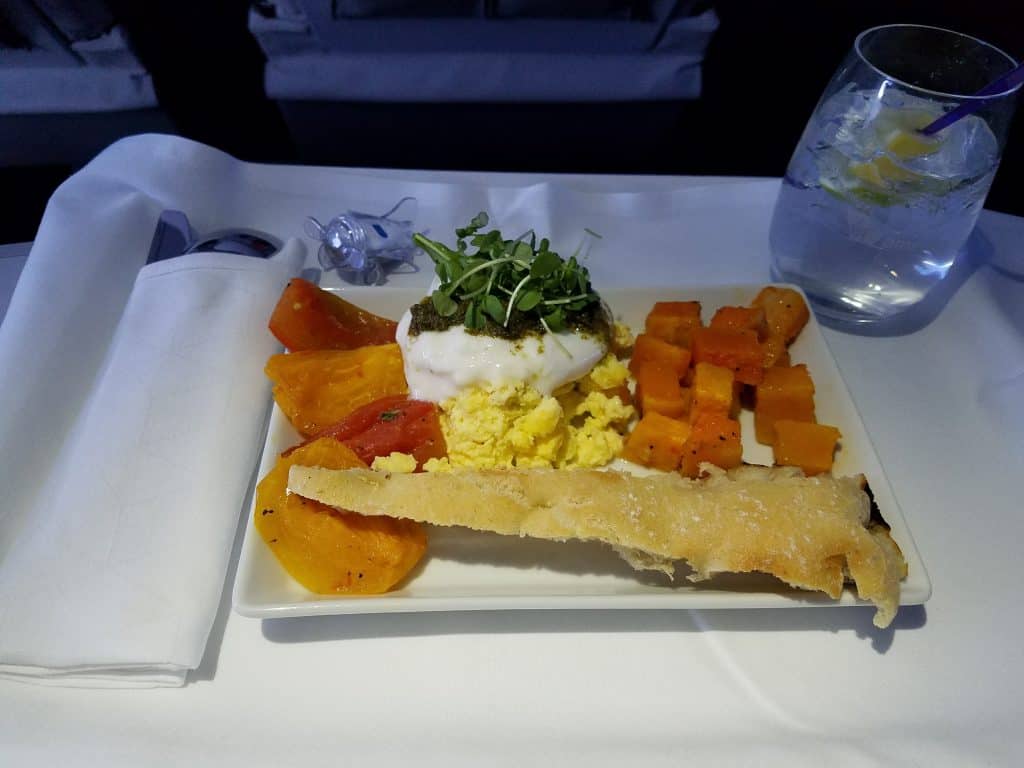 On the return trip I picked the Thai chicken salad. 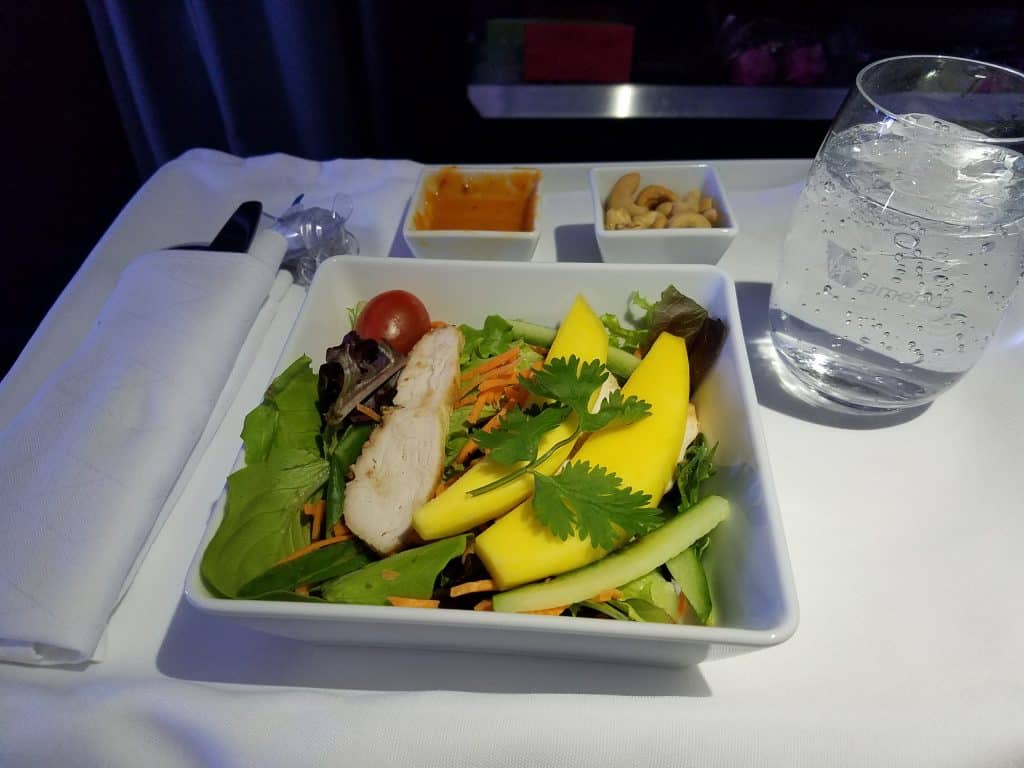 My favorite part was the salt and pepper shaker in the form of a plastic airplane. 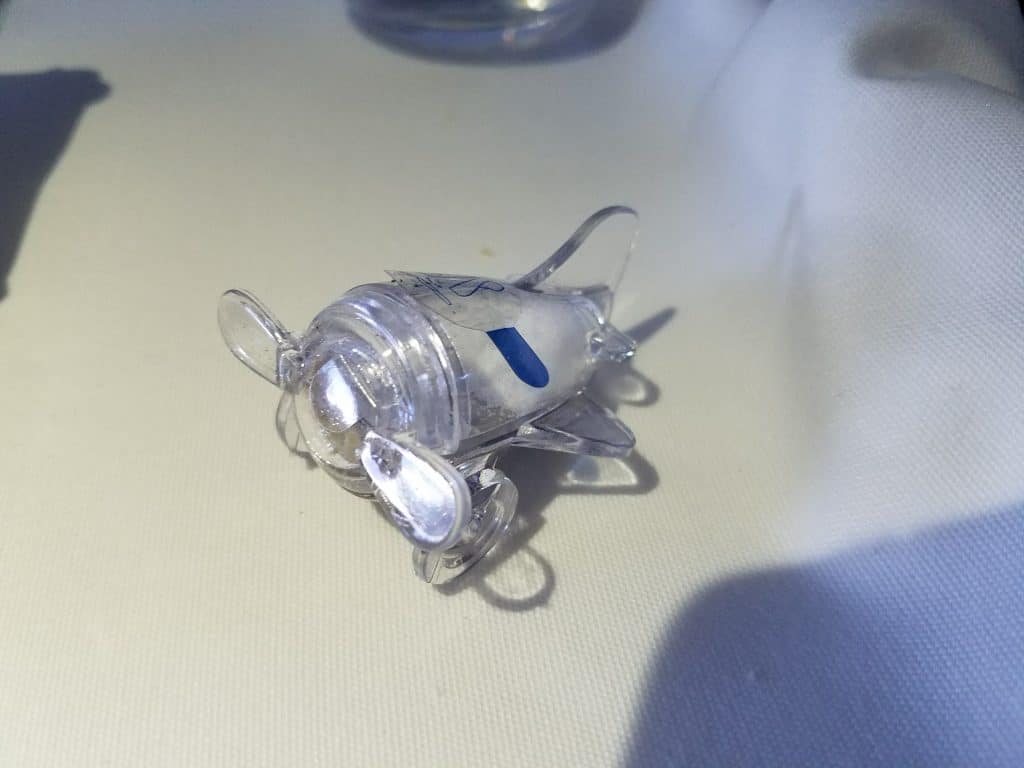 Prior to landing snacks were offered.  They were all Dean & Deluca branded. 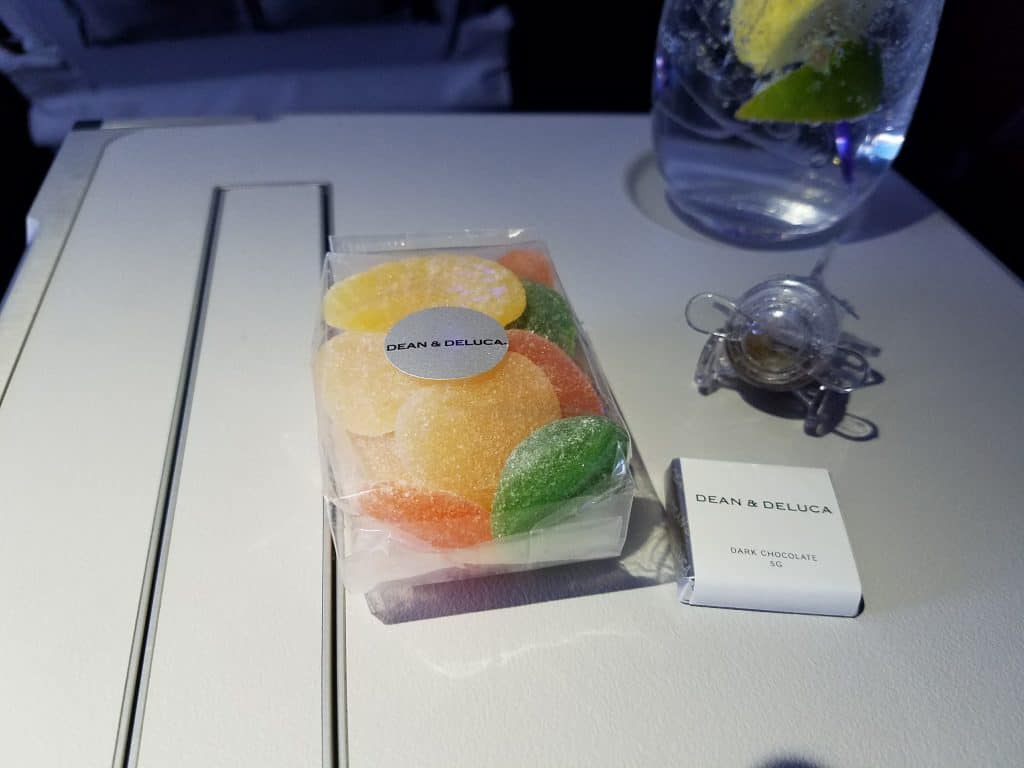 Here is a look at the full menu. 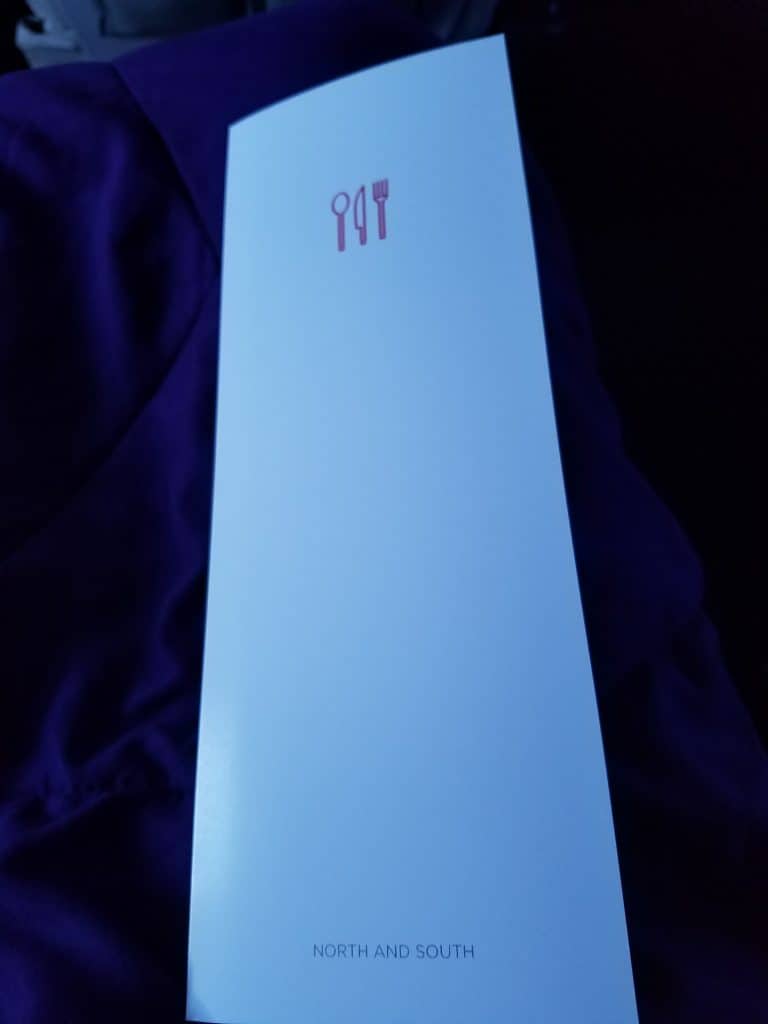 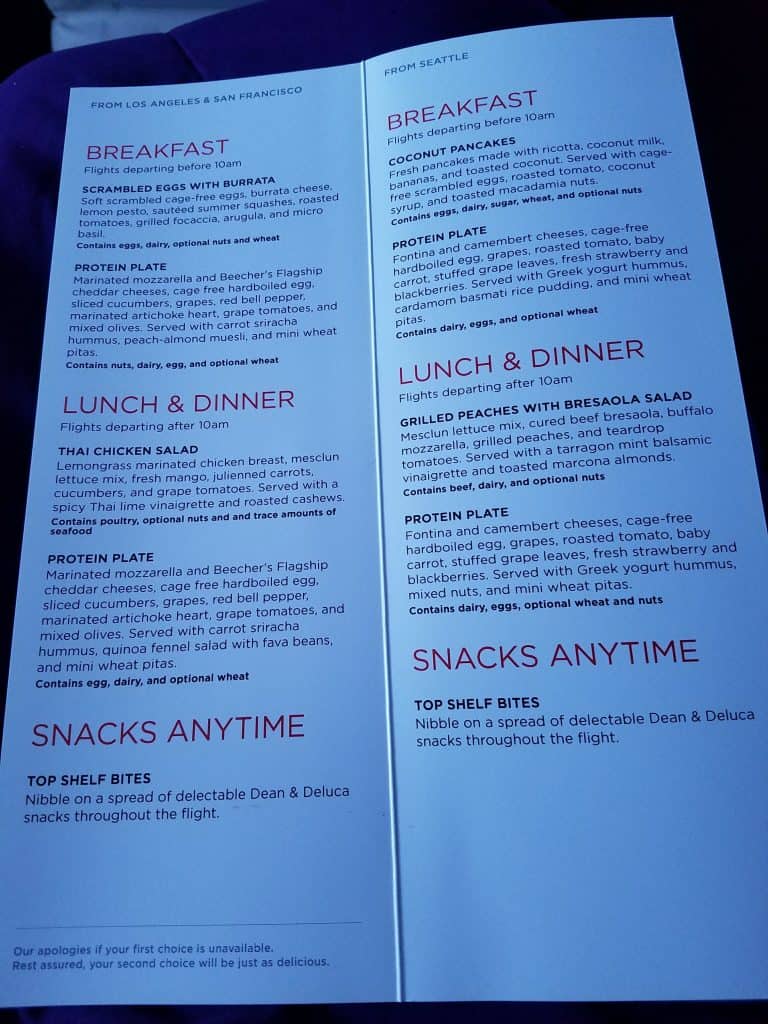 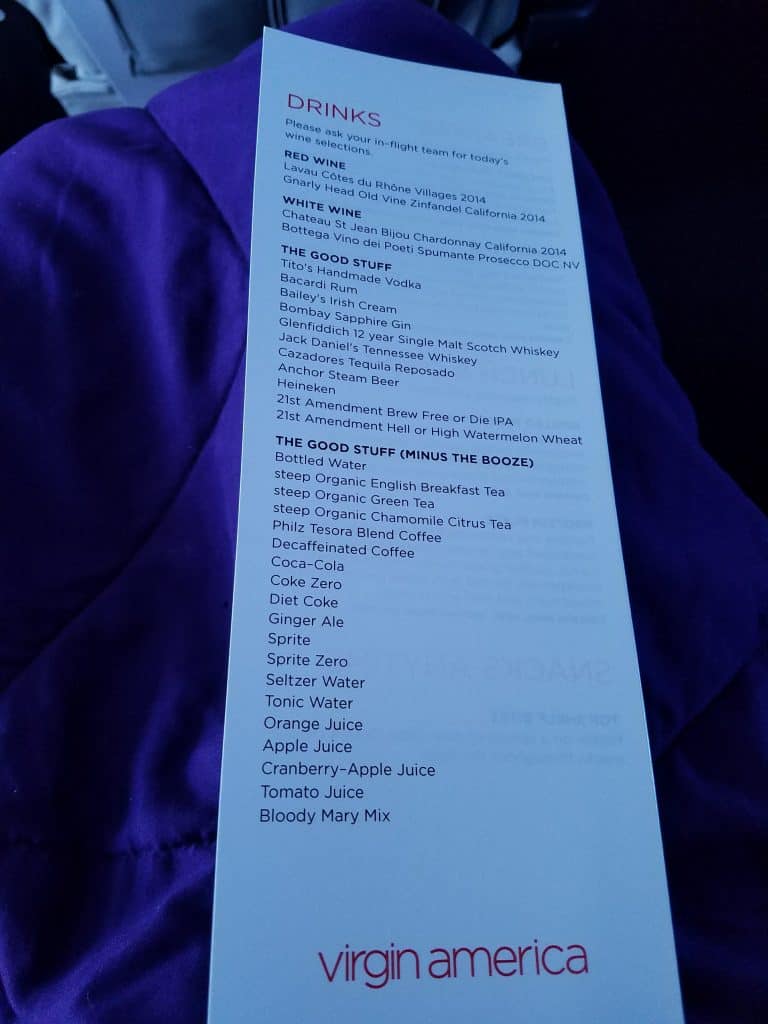 The service overall was great on my outbound flight and okay on the return.  I think having only 8 passengers for one flight attendant allows for much greater attention should the flight attendant choose to offer it.  Both flights the First Class flight attendant left for about 15 minutes to help pick up garbage in Economy.  Other than that she was attending to First Class.

Unfortunately none of the seats were working on my flight to SFO.  This meant the seats had to be reclined manually (which led to many people launching into recline mode accidentally).  The inflight entertainment didn’t work.  And I wasn’t able to charge my phone.  As an apology, I received a $150 credit for a future flight.  Way to go Virgin America!

I was very impressed by my flights in Virgin America First Class.  As they were less than 2 hours, I did not get an amenity kit, as are offered on transcon flights.

Have you flown Virgin America First Class?  What were your impressions?