I am currently on a mileage run that has me in Port-au-Prince Haiti for one night.  There is currently one national chain hotel; the Marriott Port-Au-Prince.  Opened in early 2015, the Marriott Port-Au-Prince is a joint venture between Marriott, the Clinton Foundation, and Digicel as a way to help the local economy.  The eleven story building sticks out in the city where most buildings are less than three stories. 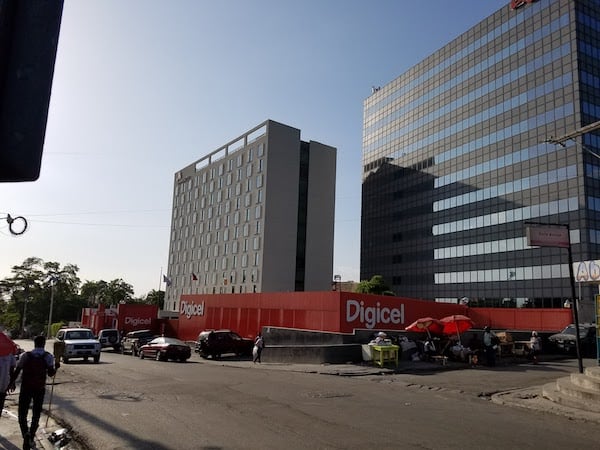 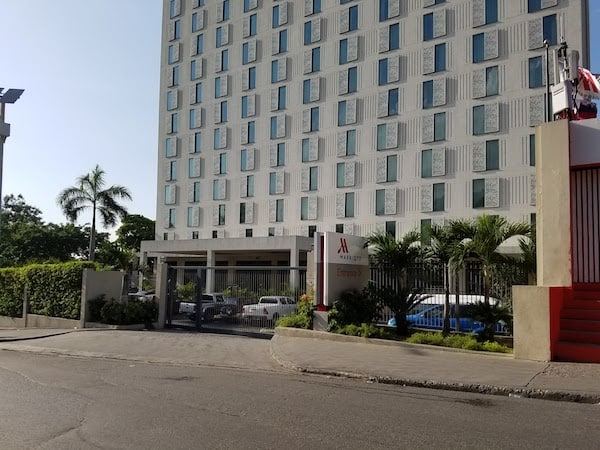 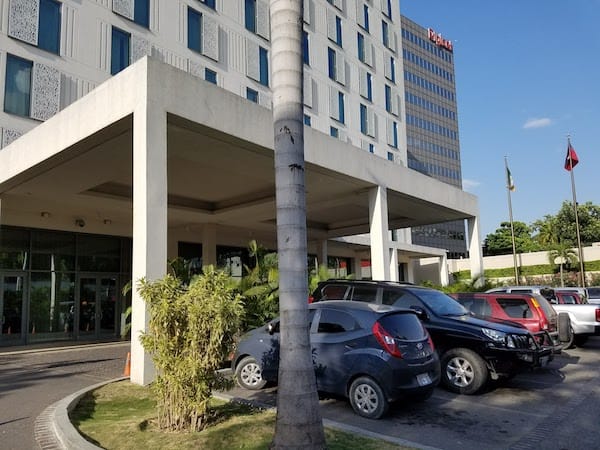 The Marriott Port-Au-Prince is about 6 miles from the airport.  It is a roughly 20 minute drive.  I arranged for a car from the hotel to pick me up at the airport ($45 each way).  I cannot imagine renting a car in Port-au-Prince as the driving is quite chaotic.  I did not see a single stop light on the drive.

Port-au-Prince is not particularly full of tourist attractions.  However the National Palace is roughly 1.5 miles away.

The hotel is gated and walled off.  Armed guards patrol 24/7.  I wanted to see a bit of the city so I took a walk from the hotel to Tag Supermarket to get some bottled water and stretch my legs.  During the day it felt safe, but realize that there are not really sidewalks so you must stay alert. 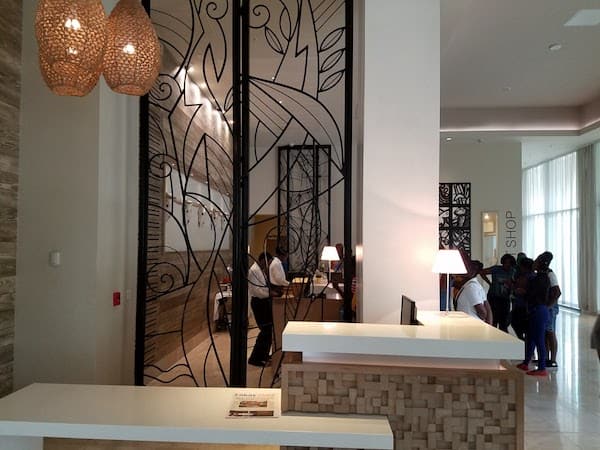 There are two gates in which you or your taxi can drop you off.  Armed guards patrol the driveway.  There is also a parking lot in the back should you choose to drive (don’t).

After flying all night and into the next day, I didn’t realize what time I arrived at the hotel.  Turns out it was noon.  Though an early arrival, they had a room ready for me.  I was assigned room 712.  There are a total of 11 floors of the hotel; although floor 1 is actually a floor above the lobby (ground).

My room at the Marriott Port-Au-Prince is a standard 1 King Guest Room.  Upon entering the room, there is a closet to the right and bathroom to the left.  The room is a very standard hotel room.  I would consider on the small side. 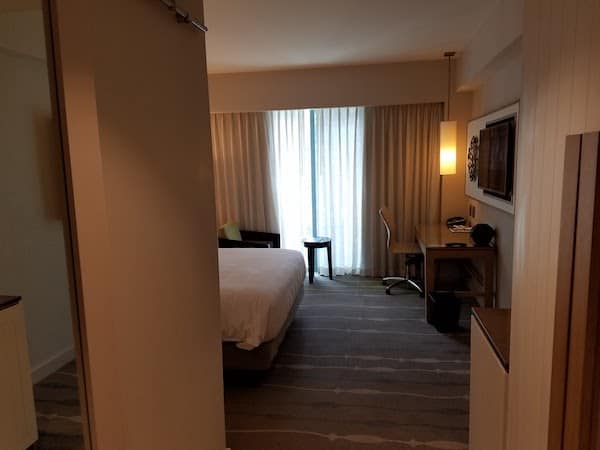 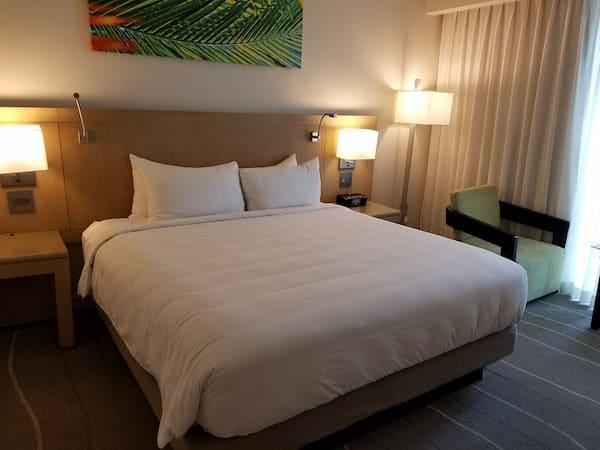 It does have large floor to ceiling windows.  My room (712) had a view out the front of the hotel into the hills. 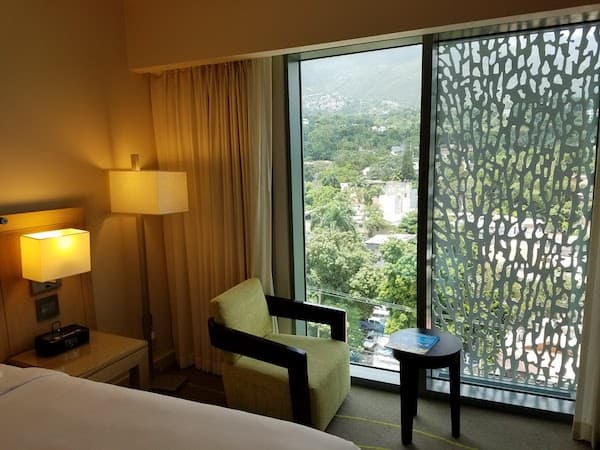 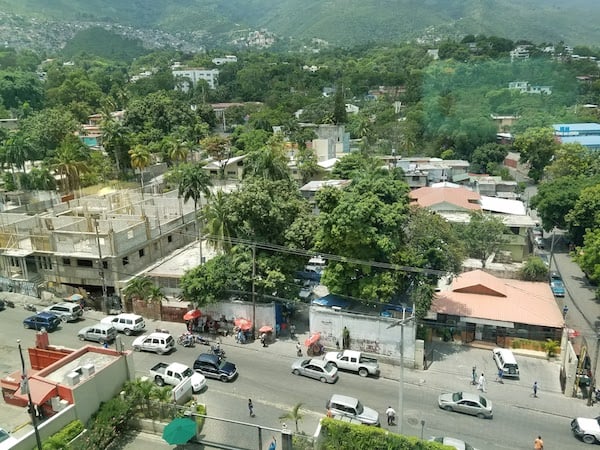 A wall mounted TV is over the desk. 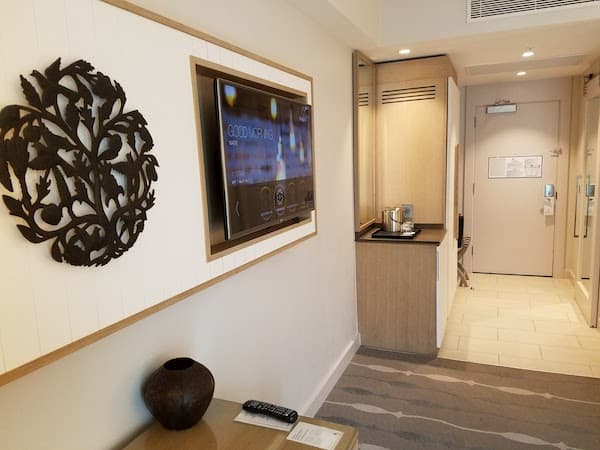 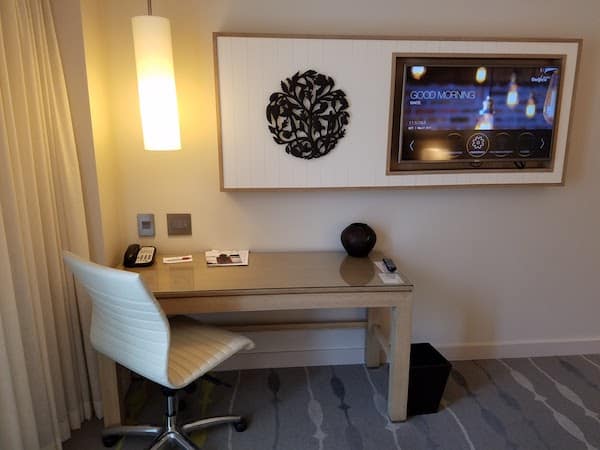 In the closet are the standards: iron, ironing board, safe. 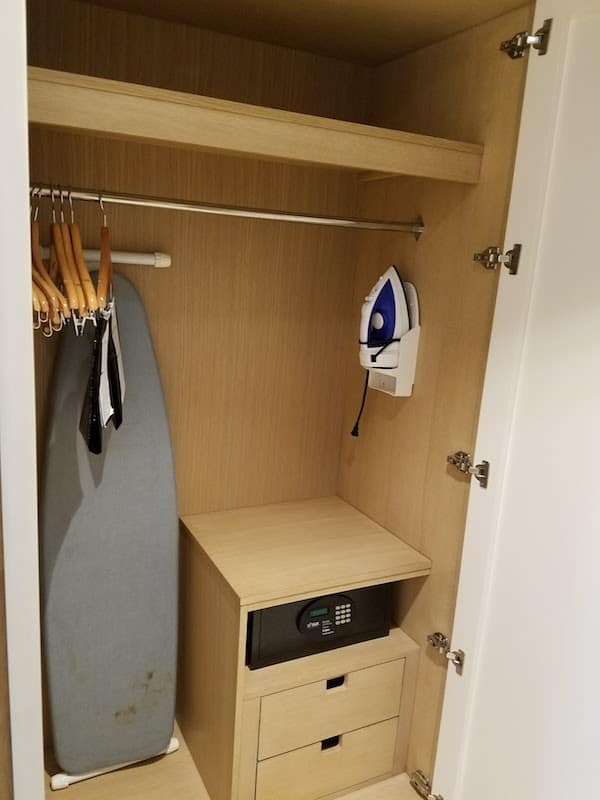 There is also a small fridge that contains two bottles of complimentary water. 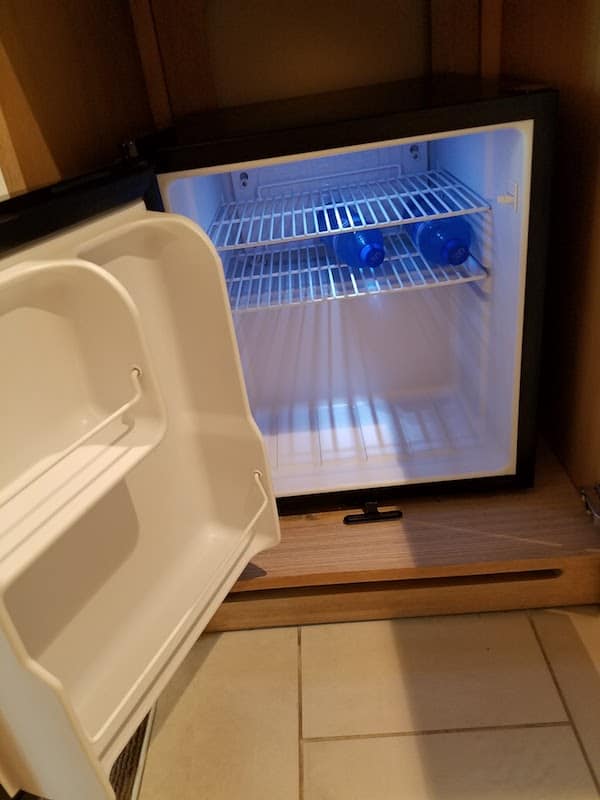 The TV had a good selection of channels although the picture “stuttered” frequently. 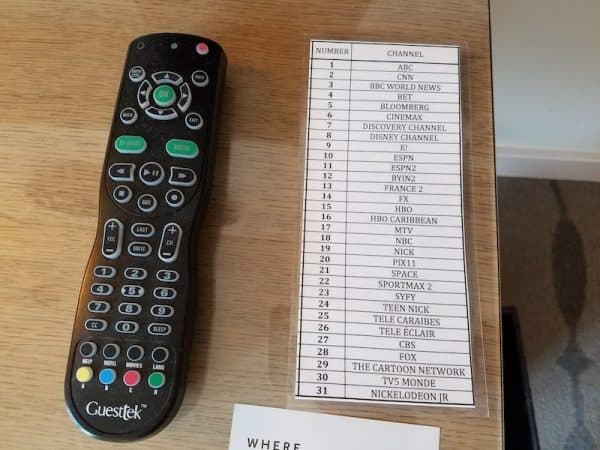 The internet is relatively quick. 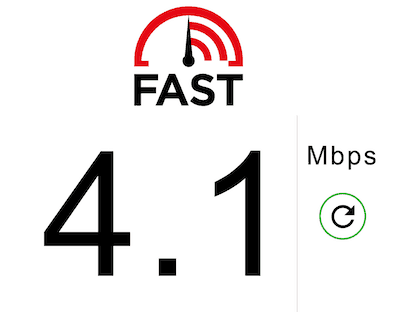 I noticed a number of stains on the carpet; it could have used a good shampoo and deep clean.  The rest of the room could also stand some attention — nothing horrible just starting to show some age. 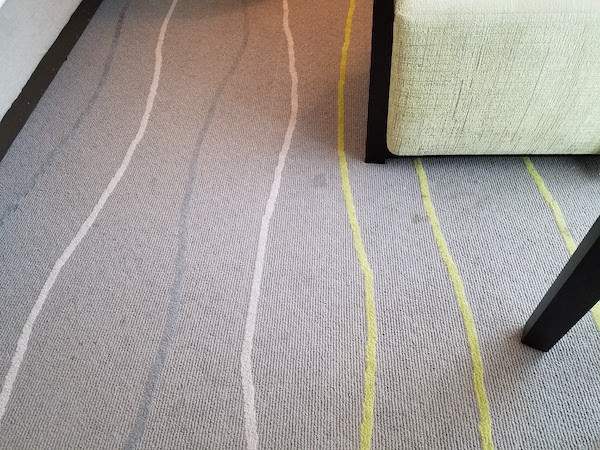 The bathroom at the Marriott Port-au-Prince is closed off by a mirrored barn door.  It is a decent size bathroom with a single vanity, walk in shower and toilet. 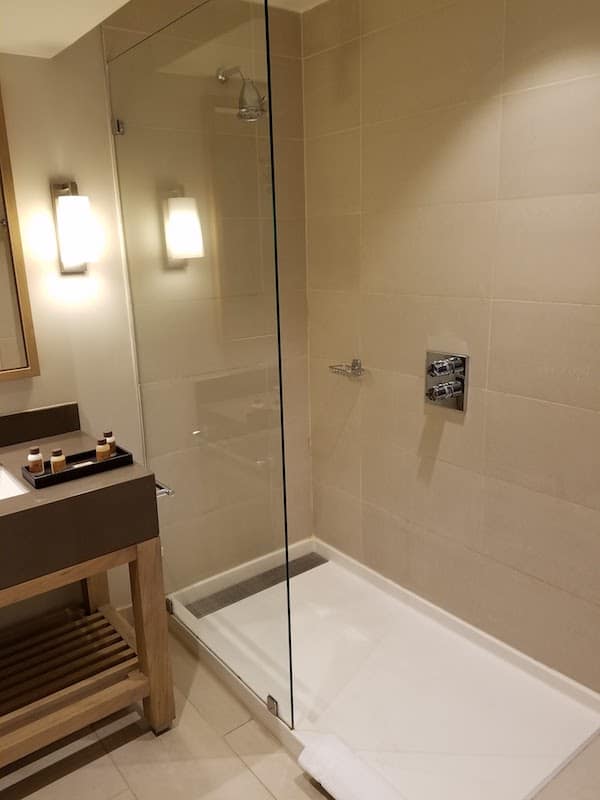 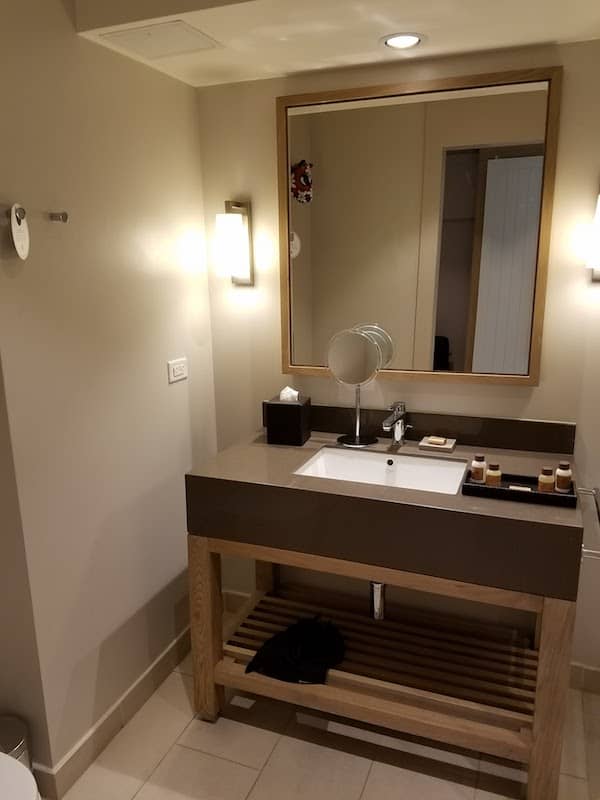 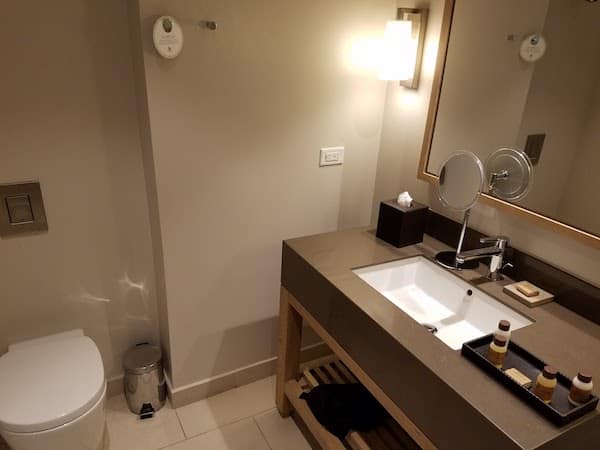 I was only provided with two bath towels (no hand towels or wash cloth), though I called the front desk and more towels were brought.

The bath amenities are locally sourced and the soap appears handmade. 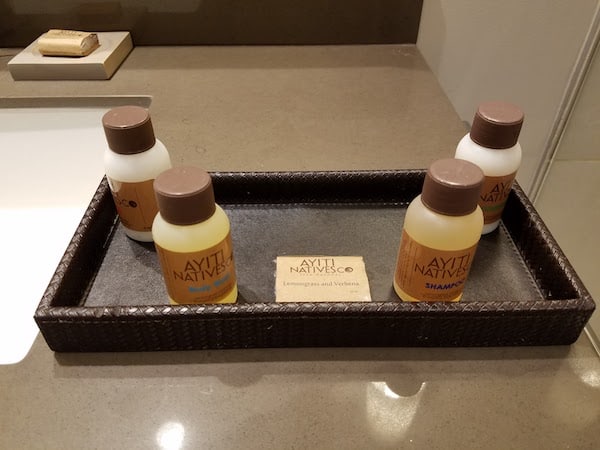 I appreciate local artwork throughout the hotel such as this bulls head above the toilet. 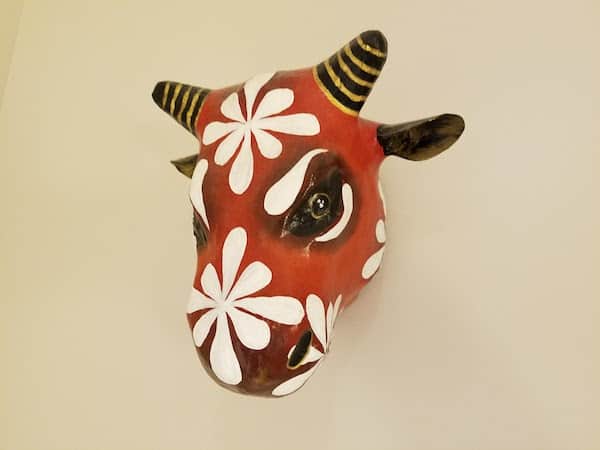 The pool itself at the Marriott Port-au-Prince looked a bit cloudy.  I did not go in.  However the area around the pool, including a patio bar, were all quite nice. 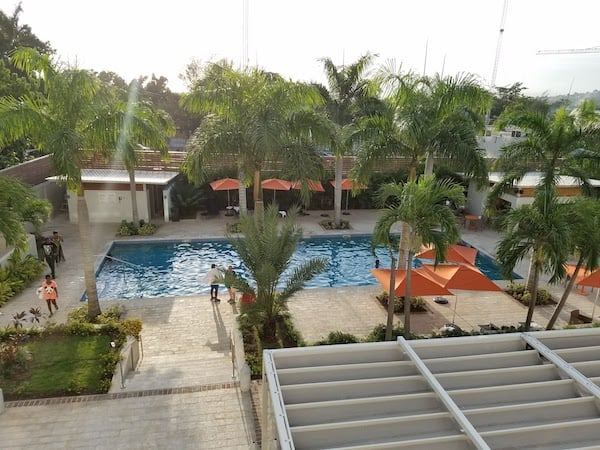 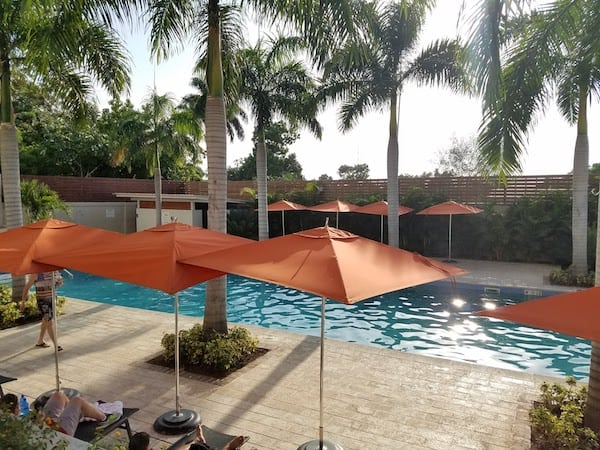 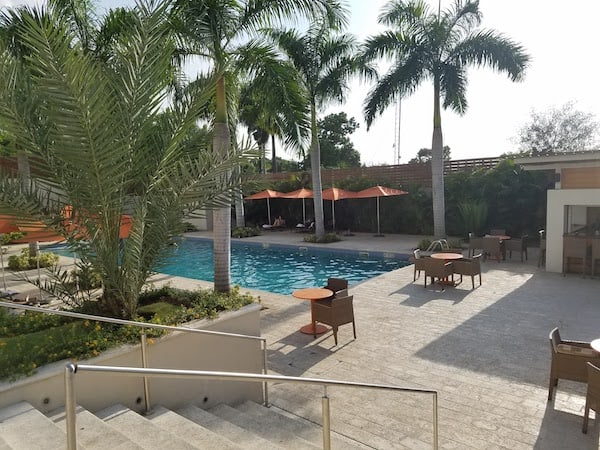 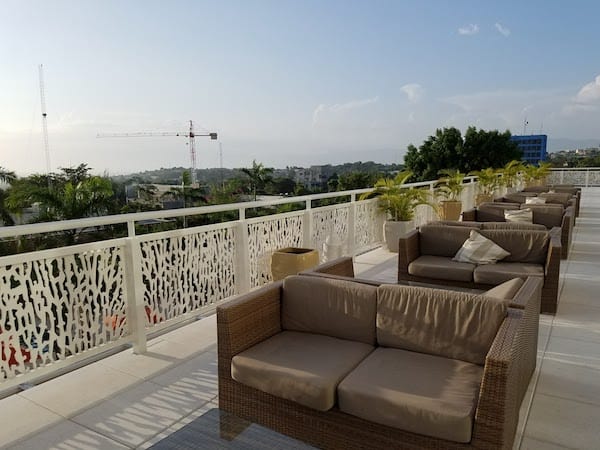 There are not many options for dining around the Marriott Port-au-Prince so expect to eat on site.  I had both dinner and breakfast at La Sirene. 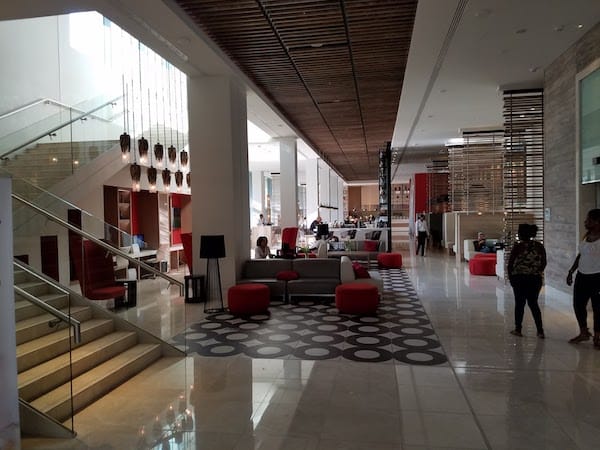 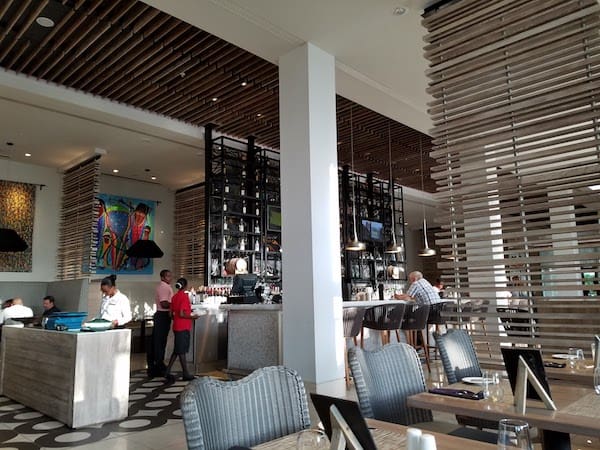 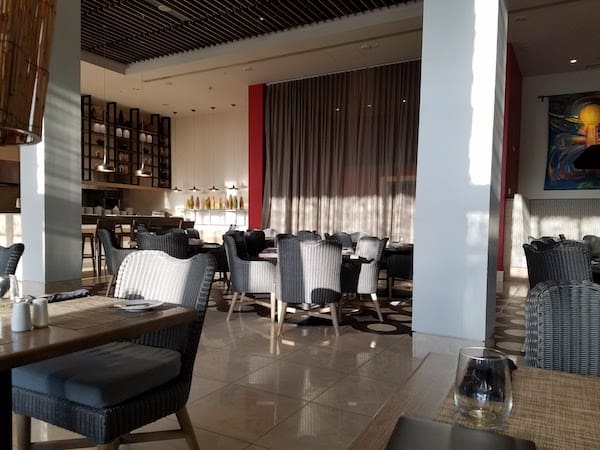 Dinner was good, though everything at the hotel was surprisingly expensive.  I had a burger that was $18.  I guess I figured things in Haiti would be cheaper, but everywhere I went, I found American prices.  Even at the grocery store.

Breakfast is a $24 and is a full buffet.  However, I did not find it to be very good.  Limited options; the best choice is ordering an omelet.

Service at the hotel is far from polished; including at the restaurant.

There is also a coffee bar and quick service restaurant called Cafe Cho.  The prices are are a bit lower, however still more expensive than I would have thought.  A small packaged orange juice is $5. 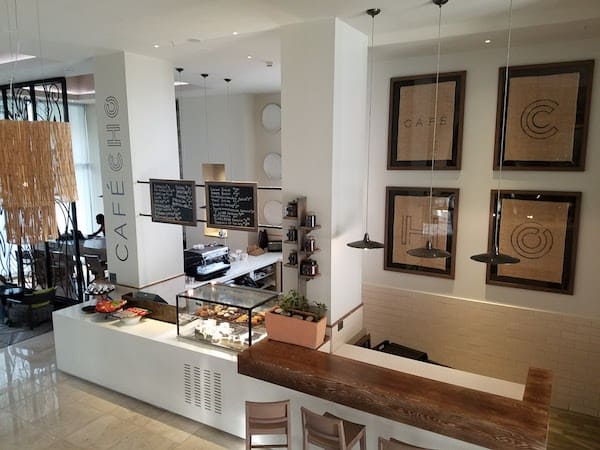 The Marriott Port-au-Prince is up to the standards of any US property.  The weaknesses are that the service and cleaning could be a bit more detailed.  The prices are what you would pay at a Marriott in a city in the US.  You could find a much cheaper property in Haiti (probably every other hotel).  However, with the cost comes security and comfort. 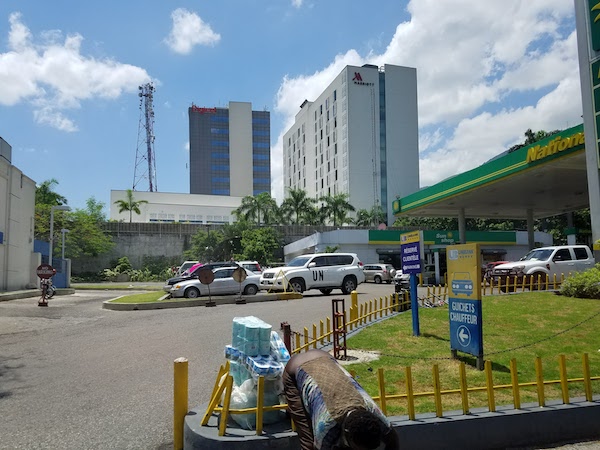