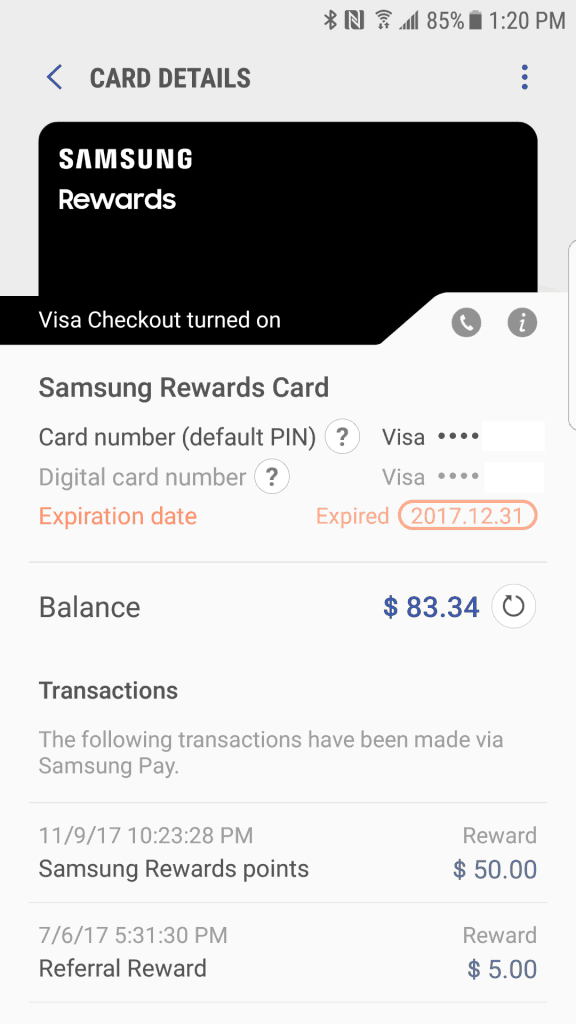 I contacted customer service and they replied:

We see that the reward card which you have is expired. We want to inform you that as per terms and conditions once the reward card expire there is no option to provide a new reward card or new expiration date.

A year ago I made the jump from iPhone to Samsung Galaxy.

T-mobile was running an unbelievable promotion at the time.  Purchase two of the brand new Galaxy S7 Edge phones ($779 each), get a rebate in the amount of $779, plus two free years of Netflix, plus two free Samsung Gear VR headsets.

With tax, I was out of pocket $1,710.  Selling the second headset and Gear VRs, plus the rebate gift card, Samsung Pay promo and 2 years of Netflix was worth $1,712 to me.  With some work (selling the devices, applying for the rebate) I came out ahead $2 and a brand new, top of the line cell phone.  I also ended up selling my iPhone for $440.  Without a doubt in my mind I came out way ahead.

Samsung Pay is similar to ApplePay.  It is a mobile payment “wallet” where you can scan your credit cards from most banks into your phone.  Your phone then becomes a virtual credit card.  Samsung Pay allows you to register up to 10 credit cards on your phone.

The one huge difference between ApplePay and Samsung Pay is the technology.  ApplePay uses Near Field Communication (NFC) to transmit the credit card info to special payment registers.  A lot of stores now have these registers.  But a lot still do not.

That is where Samsung is superior.  Not only does Samsung Pay use NFC, it also uses a proprietary technology called Magnetic Secure Transmission (MST).  You know that black stripe on the back of your credit card?  Samsung Pay creates it’s own magnetic field that mimics that credit card stripe.  This means that Samsung Pay can be used virtually anywhere the credit cards are accepted.

There have been hundred of times over the past year that I have gone to pay with my Samsung phone and had the cashier say that they don’t accept mobile payments.  Typically I will ask, “Can I try?” and they will usually humor me.  I tell them to set up the payment as a credit card, then I hold my phone next to their credit card swiper and voila — it works!  I would say it works about 90% of the time.

So, besides not having to carry around 10 credit cards in your wallet, why would someone want to use Samsung Pay?

You can earn higher status if you use Samsung Pay enough each month.  If you pay with Samsung Pay 30 or more times in a month, you achieve Platinum Status.  Instead of earning 10 points per payment, you now earn 40 points. 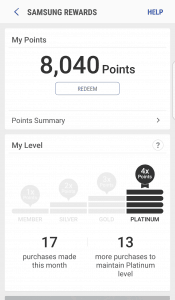 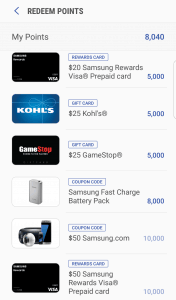 Points can then be exchanged for gift cards.  A $50 Visa gift card costs 10,000 Samsung Rewards points.  This is the best value available; although sometimes there are promotions that offer better redemption value.  Samsung Reward points, then, are worth 0.5 cents each.  That means as a Platinum, you earn $0.20 per purchase with your Samsung Pay phone.

Samsung has been known to offer 2x or 4x bonus days.  And on those days, you are earning $0.80 per purchase.

Even better, since you are technically using your credit card, you are also earning credit card miles/points.

A new credit card issued by US Bank is about to hit the market that will give you 3x points when using mobile pay (Samsung Pay included).  This could be quite the money maker since Samsung Pay is accepted just about everywhere.  However, Doctor of Credit reports that MST payments are excluded from this promotion when the card launches on May 2.  I guess we will wait and see.

Have you used Samsung Rewards with Samsung Pay yet?  What have you “purchased” with your points?  Have you experienced the skepticism of cashiers?

UPDATE: When signing up, use my referral code to get a $5 gift card with your first purchase: A1F496  Note: I also get $5 if you sign up with my code.