I status matched to Hilton Diamond late last year.  Since then I have had a total of two stays; one in Copenhagen and the other more recently at the Hilton Garden Inn Redding.  I have a few more stays booked as I earned a bunch of points through two Hilton credit card sign up bonuses.  I am definitely a Hyatt guy, but Hilton hotels are in a lot of places that Hyatt is not.  Such as Redding, CA.

In a past life I was director of a youth program that included taking teens on trips around the country.  One of these trips was a week of house boating on Lake Shasta.  It’s been a number of years since I lead the trip.  This year the program needed help driving the teens back to Seattle and offered to pay for airfare down and lodging the night before the drive.  I had the time and thought it would be a fun adventure.

I flew Alaska (by Horizon) to Portland (PDX) and then PenAir, a small regional airline, on to Redding (RDD).  The flight was on a 30 seat Saab 340, complete with a serving of Costco bought snacks and turbulence. 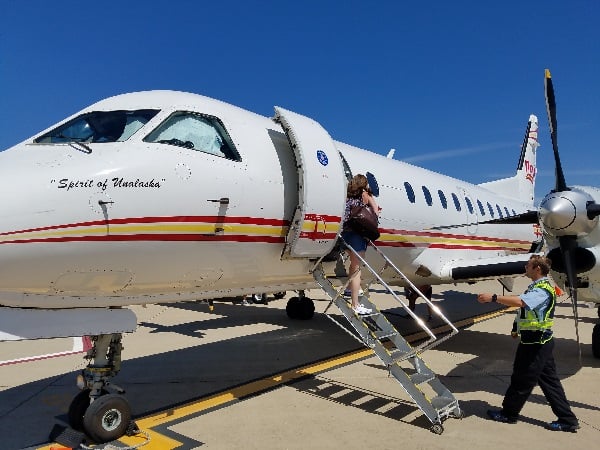 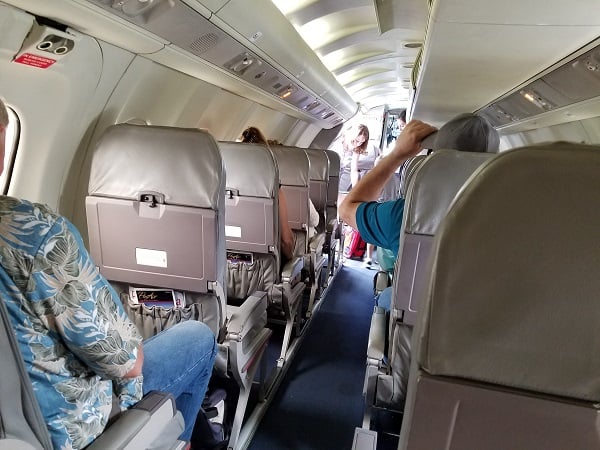 I had never stayed at a Hilton Garden Inn, but the other options of hotels in Redding were abysmal.  I would say that Hilton Garden Inns are in the same category as Holiday Inn Express.  They are all just about identical and you know what you are getting — a non-offensive, basic hotel with easy access to the highway.  It was one of the most expensive options in Redding at $140 a night.

Check In: I checked in via the phone app and was able to pick my room, which is actually a cool feature.  I ended up going with the room they preassigned me; a corner room on the top (third) floor.  I was traveling with two others that were sharing a room.  I re-checked in as I needed to use the program’s credit card instead of my personal one.

The lobby was in great shape (the building was probably less than 10 years old).  Very non-offensive, updated but not what I would call modern.  Felt a bit like a Panera restaurant. 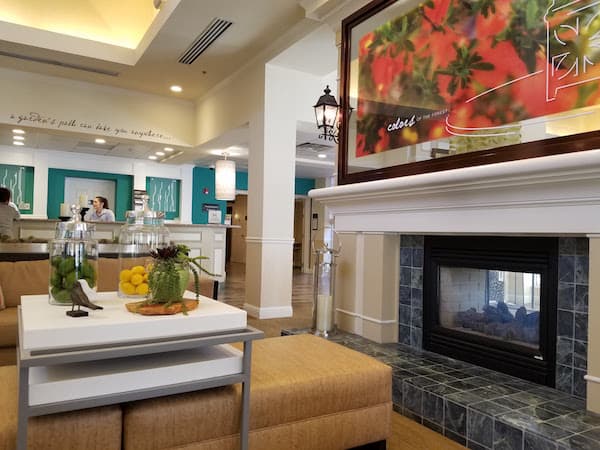 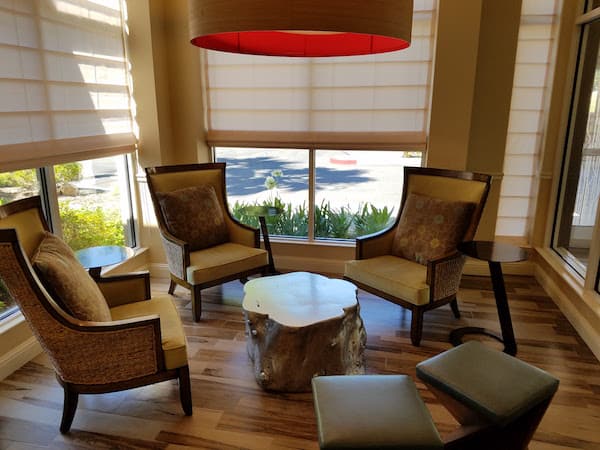 The desk agents were quite friendly and there was no line.  I was offered Diamond bonus points or a full breakfast in the restaurant.  When she realized I was traveling with two others, she offered that all three of us could have free breakfast so I took that option.  In reality I ended up getting the 750 bonus points as well.

I was given two bottles of water and each of my travel companions were also given a bottle of water.  Wifi was free and the agent explained how to connect (there was also a sticker on my key envelope that told how to log in).

Room:  I had a King Room and it was totally adequate.  It was quite clean and comfortable though I would not want to hang out in it. 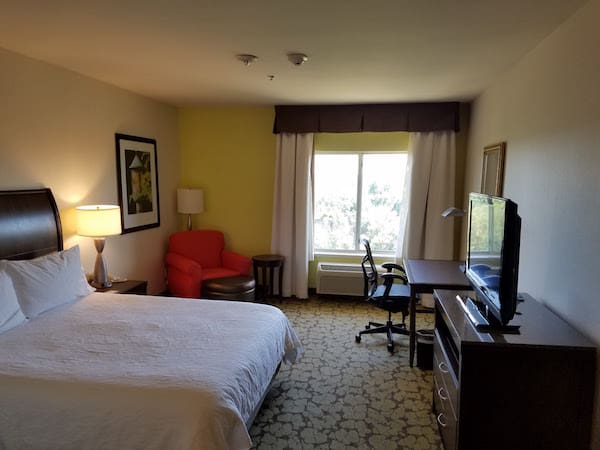 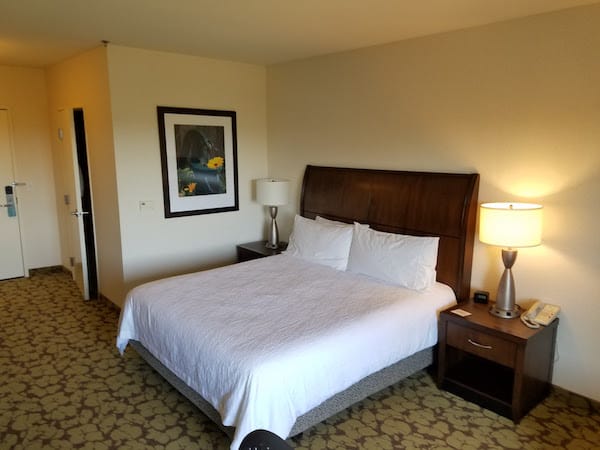 The bed side lamps had multiple plugs which I appreciate.  The desk chair was comfortable (although I am one of the minority that don’t think desks are necessary in a hotel room).

I don’t think I even turned on the TV but I’m sure it was fine.  There was a mini fridge under the coffee maker and a microwave above it. 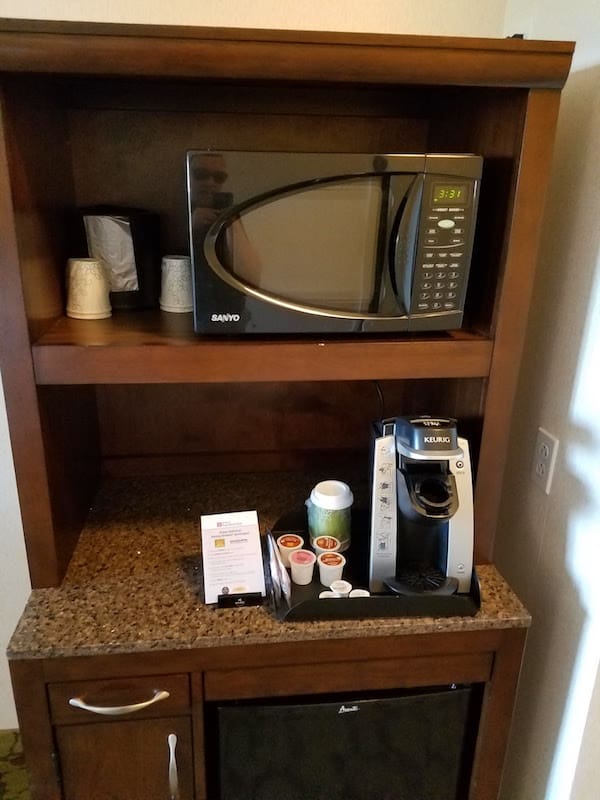 Bathroom: The bathroom at the Hilton Garden Inn Redding was stocked with plenty of towels.  It was a single vanity with plenty of counter space.  The florescent light was a bit jarring.  The towel rack was built into the wall at the end of the tub/shower; one of those metal types you would find in a Motel 6. 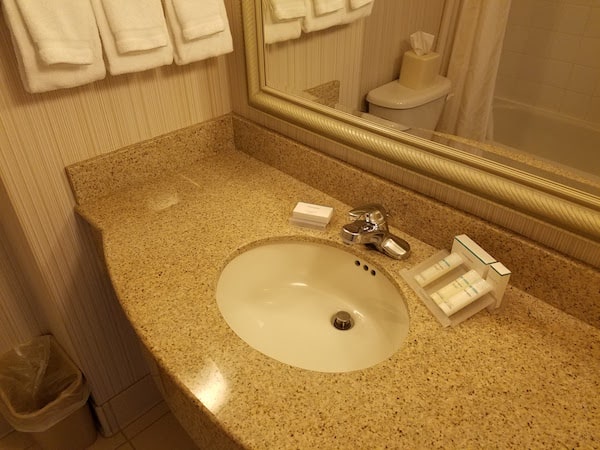 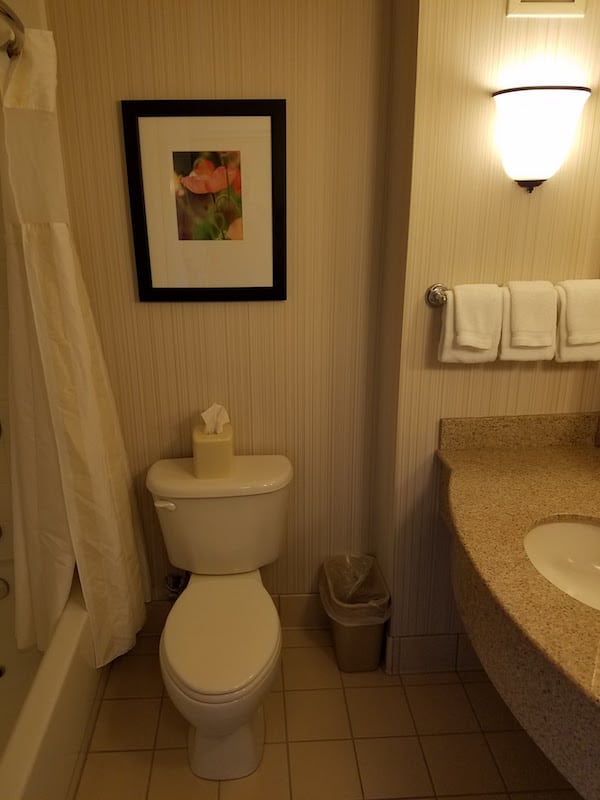 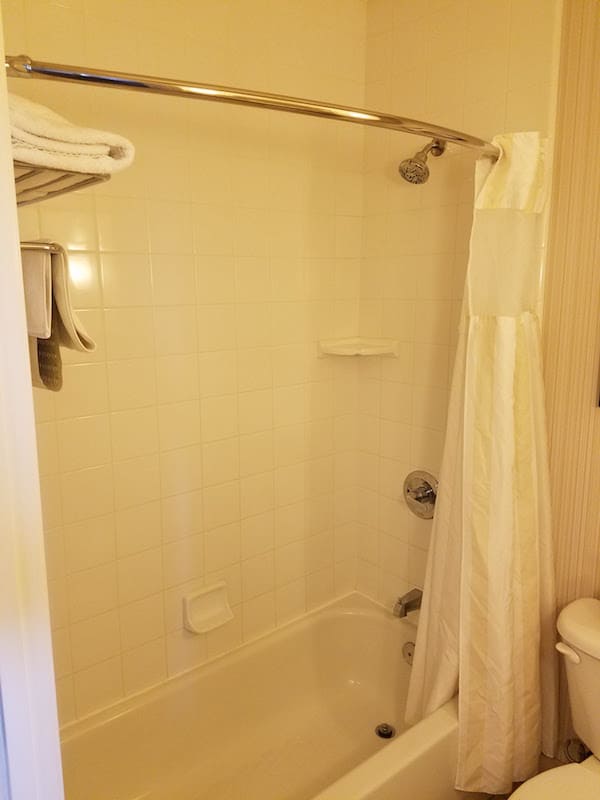 The best feature of the bathroom were the products; Neutrogena brand.  It seems to be a trend even in lower end hotels to have branded soaps and shampoo.  It is a win-win; brand gets its product in the hand of the consumer to try out and the hotel looks classy by having name brand products. 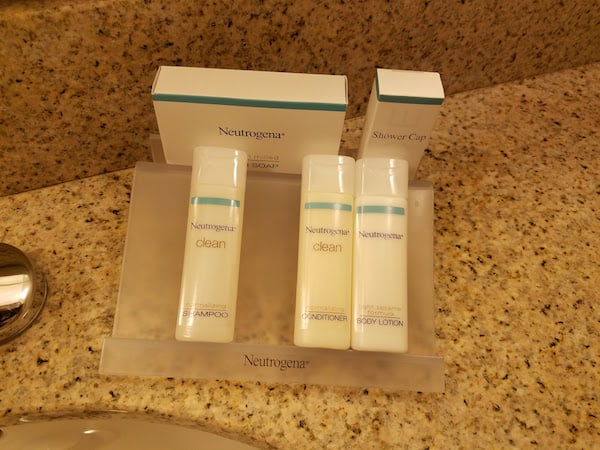 Pool: The pool at the Hilton Garden Inn Redding was a bit sad but hey, at least it had a pool.  It was probably about 6 feet by 10 feet surrounded by cement and a few lounge chairs.  The pool was dirty; I wasn’t brave enough to go in.  There was also a hot tub that was almost the same size.

There were no towels at the pool; you had to go inside to the gym to retrieve them.  The gym was basic but I am guessing would suffice.

Breakfast: The breakfast was at the onsite restaurant (half of the lobby).  There was a cold buffet and hot items to order.  It was priced at $10.95.  Not sure if that was one price for whatever you ordered, but as our meal was included I wasn’t too concerned. 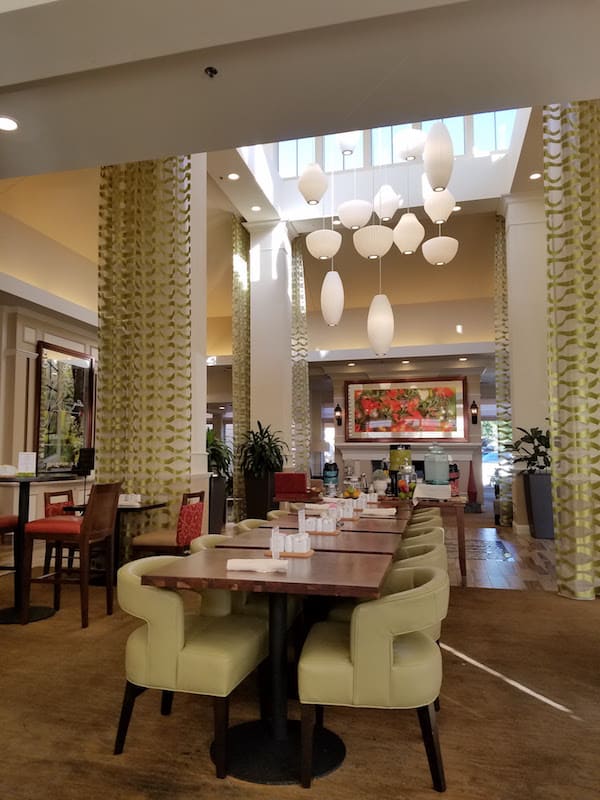 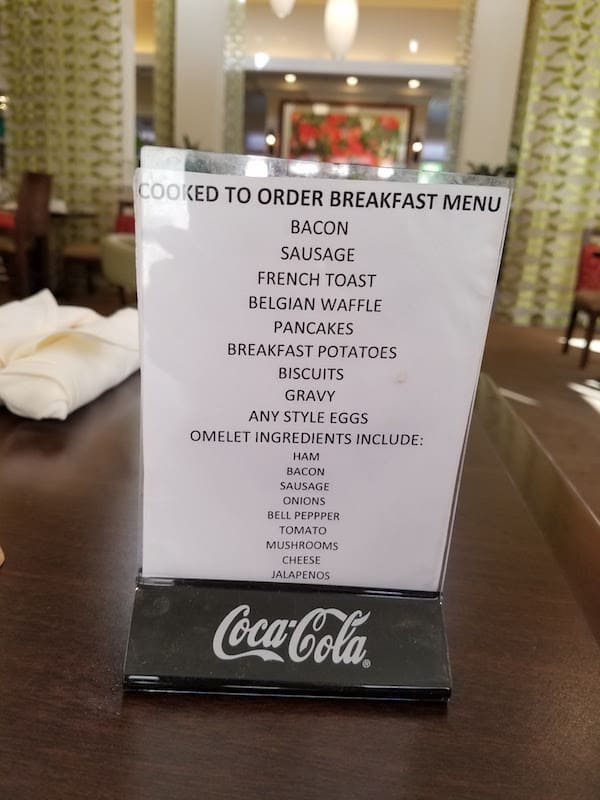 I ordered French Toast with a side of eggs and potatoes.  From the cold bar I got some fruit (mostly melon and pineapple).  The food, like the hotel, was adequate and for free I wasn’t going to complain.  The server (and all staff to be honest) were really friendly and quick.

Overall: The options in Redding are not great.  So I wouldn’t hesitate to go back to the Hilton Garden Inn Redding if I had a reason to spend the night in Redding.  It is a bit south of town but close to the airport.

The staff are nice and the room was clean.  It would be nice if they cleaned the pool better (as well as the outside of the windows in the room).