When a baseball team isn’t selling tickets, they will often do a giveaway promotion to entice fans to come to the game.  The Seattle Mariners have had a long dry spell in the winning season department; they haven’t made it to the playoffs in 15 years.  Tonight, June 7, they partnered with the hometown airline for the Seattle Mariners Alaska Airlines Voucher promotion. 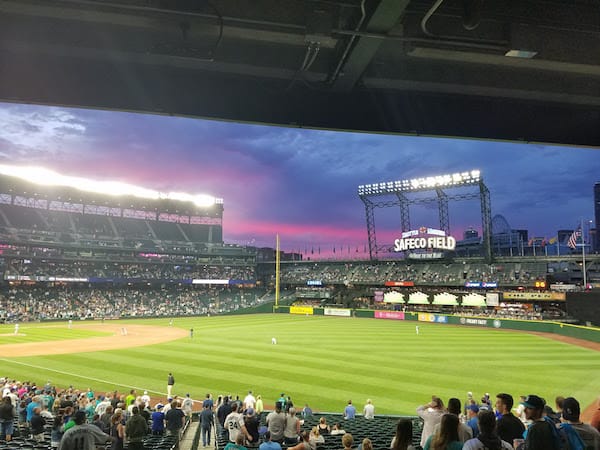 The first 11,500 fans to arrive to the Indians vs Mariners game at Safeco Field in Seattle were given a paper voucher with a unique discount code that could be redeemed online for up to 50% off a flight for two people on the same reservation.  In reality, I don’t think there were even 11,500 spectators at the game, so I think everyone was able to get a voucher or two. 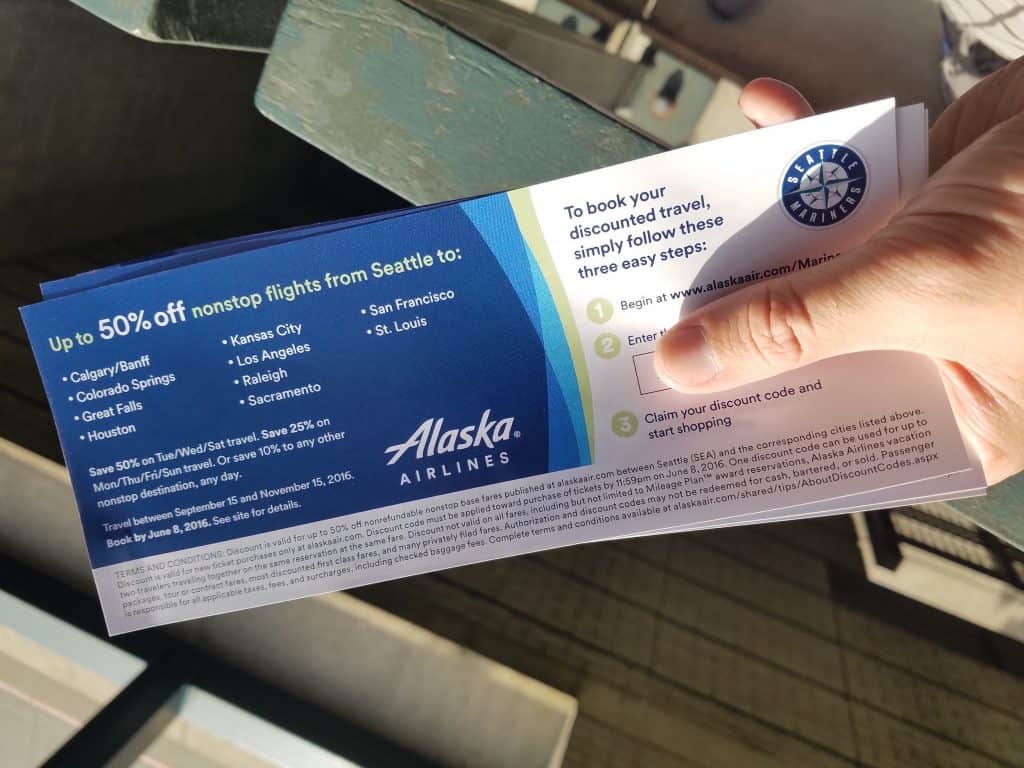 There were lots, I mean LOTS, of conditions to the Seattle Mariners Alaska Airlines voucher.

First, you had to use the discount by 11:59PM on June 8th.  That gave customers about 30 hours to book their flight with the discount.

Third, the largest discount was only available for select cities.  If you used to fly to an unlisted city you still received 10% off the flight.  You were required to depart from SEA.  The cities with the big discounts were:

In order to get the full 50% off, you also had to travel on a Tuesday, Wednesday, or Saturday.  If you traveled on another day, you got 25% off.

I ended up using my Seattle Mariners Alaska Airlines voucher for 10% off a flight to Las Vegas in the fall.  There were some deals where you could get a round trip to LAX or SFO for $108 with the discount so there were deals to be found if you had the flexibility.

I do have to say the cities picked were a bit random.  I figured maybe it had something to do with where the Mariners were going to be playing, like they have done with previous promotions with MLS, but that doesn’t appear to be the case.  A similar promotion was staged earlier this year with the NBA Portland Trailblazers.

As a thank you to all of the passionate Mariners fans who travel Alaska Airlines throughout the year, we’re offering the first 11,500 fans a voucher for up to 50% of their next flight to:

TERMS AND CONDITIONS: Discount is valid for up to 50% off nonrefundable nonstop base fares published atalaskaair.com between Seattle (SEA) and the corresponding cities listed above. Discount is valid for new ticket purchases only at alaskaair.com. Discount code must be applied toward purchase of tickets by 11:59pm on June 8, 2016. One discount code can be used for up to two travelers traveling together on the same reservation at the same fare. Discount not valid on all fares, including but not limited to Mileage Plan™ award reservations, Alaska Airlines vacation packages, tour or contract fares, most discounted first class fares, and many privately filed fares. Authorization and discount codes may not be redeemed for cash, bartered, or sold. Passenger is responsible for all applicable taxes, fees, and surcharges, including checked baggage fees. Complete terms and conditions available atalaskaair.com/shared/tips/AboutDiscountCodes.aspx