I was just in Baltimore for a work conference, the one time a year I actually get paid to travel.  Last year the conference was in San Diego, where I stayed at the Grand Hyatt.  There are two Hyatt properties in Baltimore, a Hyatt Place and the Hyatt Regency Baltimore Inner Harbor which is located across the street from the convention center.  The rates were quite high (about $300 a night, I am guessing due to the demand with the convention in town) for a pretty basic property.  But the location and views were quite nice.  In March, 2019, the award category of this property dropped from a Category 4 to 3. 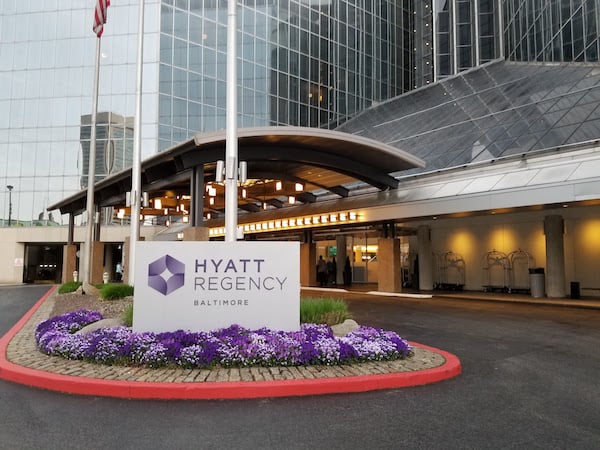 Location: The Hyatt Regency Baltimore Inner Harbor is located across the street from the inner harbor tourist area and is only blocked form the water by a two story building that houses an H&M, Urban Outfitters, Ripley’s Believe It or Not, Bubba Gump, and a Hooters.  Yes, this is the center of the tourist area.  But besides the tourist traps, there is nothing obscuring the view from the hotel of the harbor.  The hotel is only 14 stories tall so you won’t have amazing, high floor views, but if you get a Harbor View room you likely won’t be disappointed.

There is a “sky walk” that connects the hotel to the harbor above the busy Light Street that runs in front of the property.  On the backside of the hotel there is another sky walk to the convention center but it was closed for renovation during my stay.  Just past the convention center is Camden Yards where the Orioles play.  Everything is a short distance walk and there are plenty of restaurants nearby.

Check In: The Hyatt Regency Baltimore Inner Harbor is a rather ugly building from the outside.  Mirrored glass and “modern” architecture from the 1970’s.  The signage had been updated but you could still see the dirty outline of the previous “Hyatt” logo and sign. 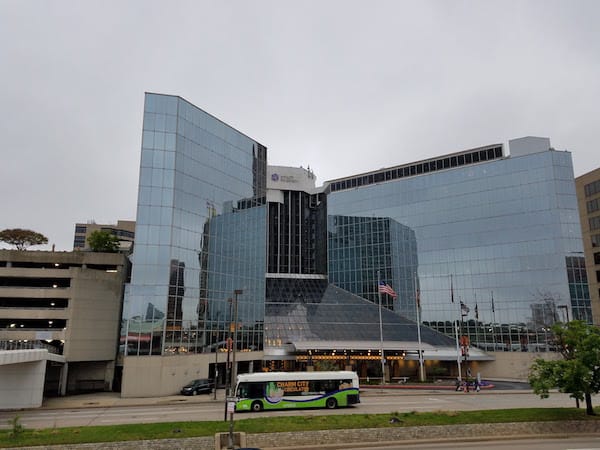 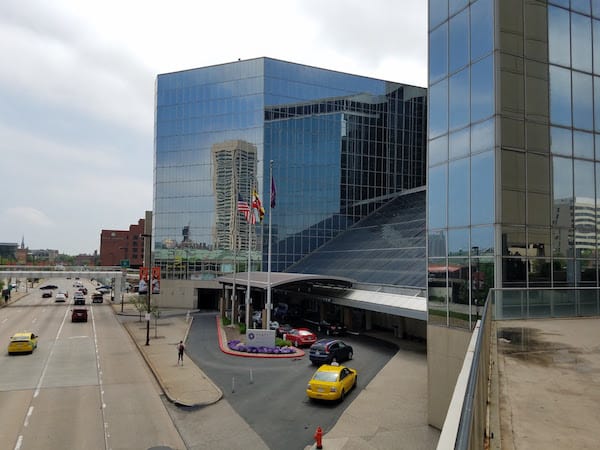 The lobby is on floor 1 and is modern and bright.  The second lobby is on floor 2 and is the typical old Regency style with atrium up to the 6th floor and glass elevators up the middle.  The decor on the 2nd floor lobby and the restaurant is quite outdated which is a shame because the main lobby and guest floors have been nicely renovated. 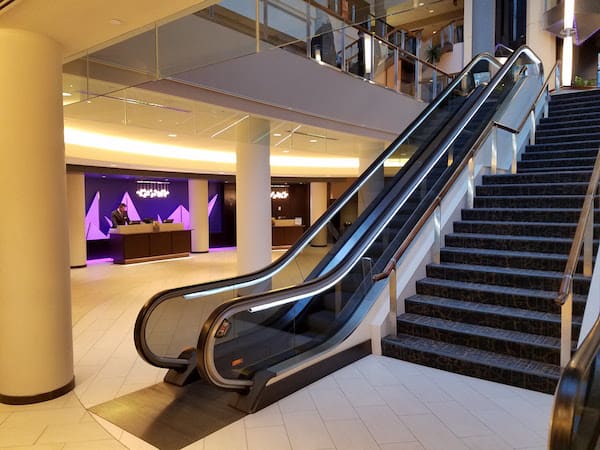 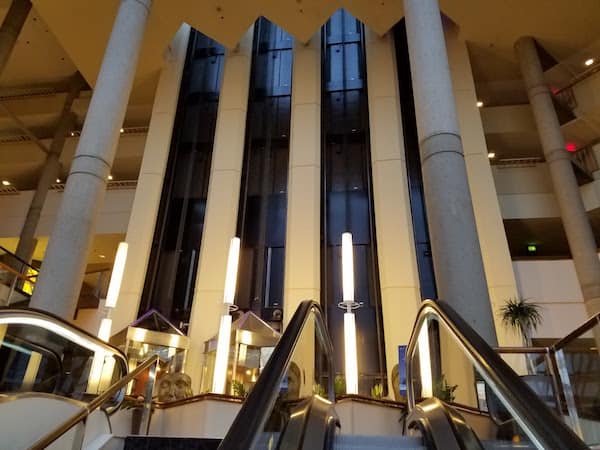 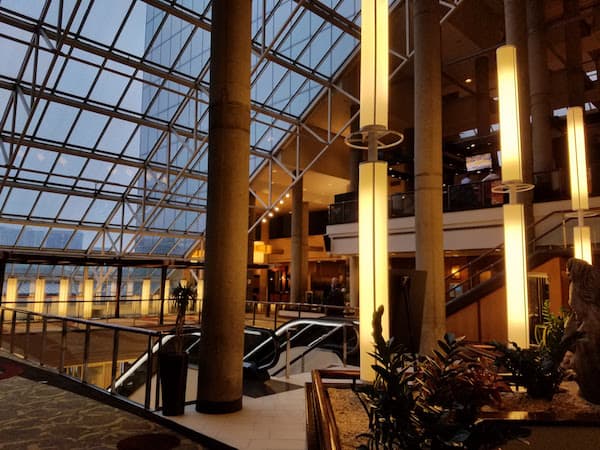 Prior to my arrival by a few days, I received an email that my reservation had been updated to include two rooms.  I checked with Hyatt and they said I had been upgraded to a suite (ie two connected rooms).  Sure enough, upon my arrival I was give room 847 and 845 that were joined through a connector door.

I was asked if I would like a late check out, which I accepted as my flight wasn’t until 5:00pm.  I also accepted the 1,000 point welcome amenity as a Diamond member.  The staff at check in was efficient if not incredibly friendly.  Typical of what I would expect from a Regency property.

The Room: I was given the Superior Harbor View Suite which is really two (oddly shaped) rooms with a lock-off door.  The living room was the larger of the two, with a sofa, chair, 55″ TV, desk and full bathroom. 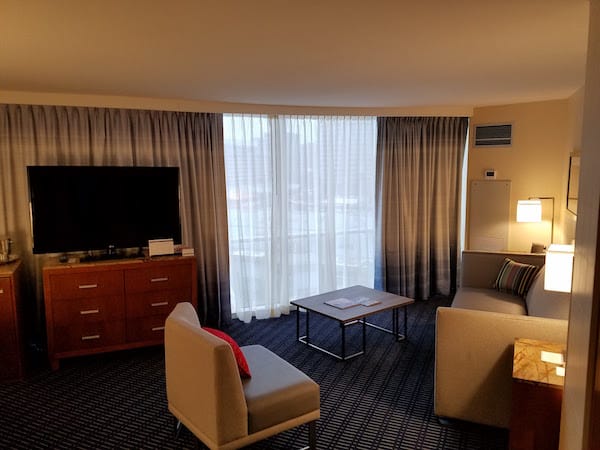 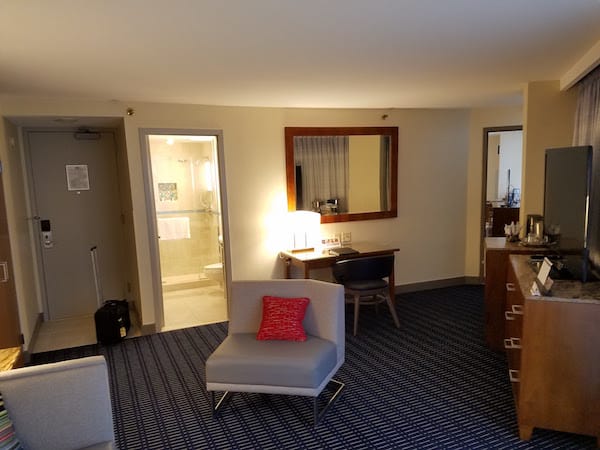 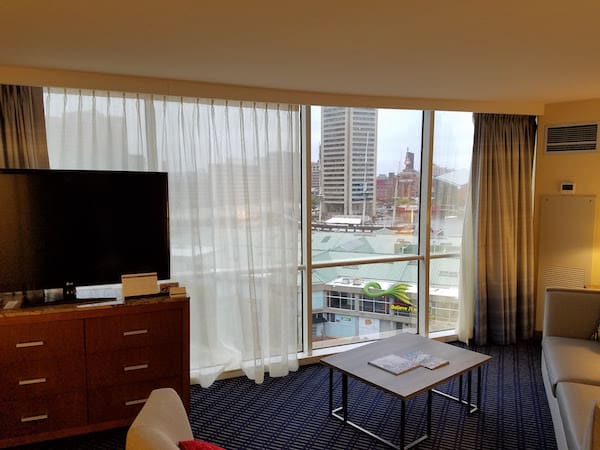 The bedroom was quite small and triangular shaped (I wouldn’t want to have that room if it was locked off) with a king size bed, smaller TV and desk.  Both rooms had a small fridge. 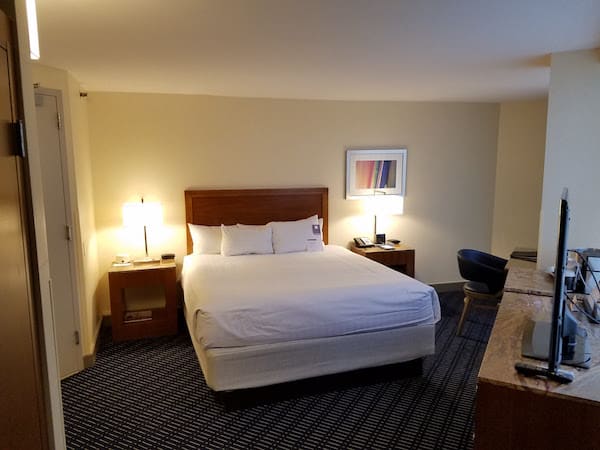 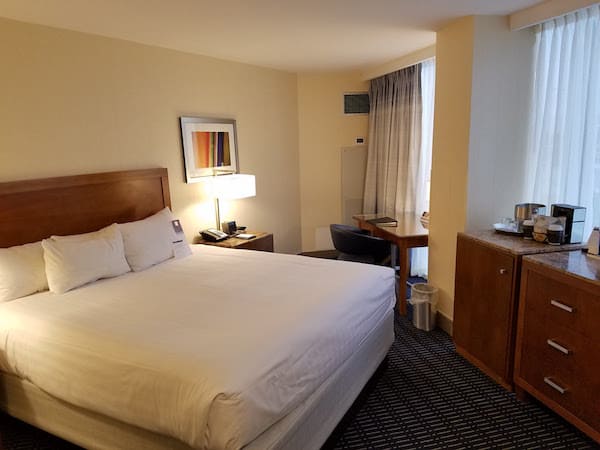 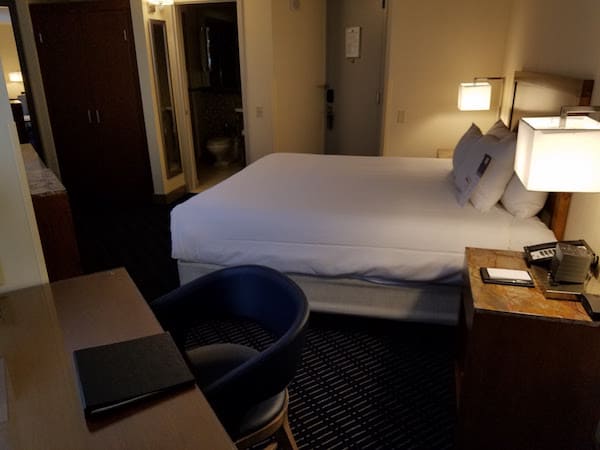 There were some nice touches like the “charging station” next to the bed and modern touch screen thermometer. 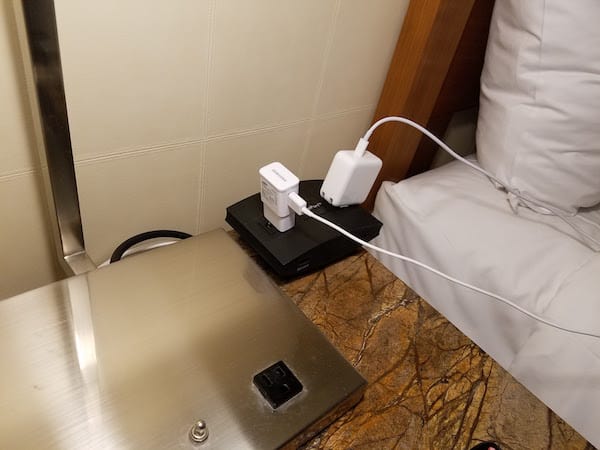 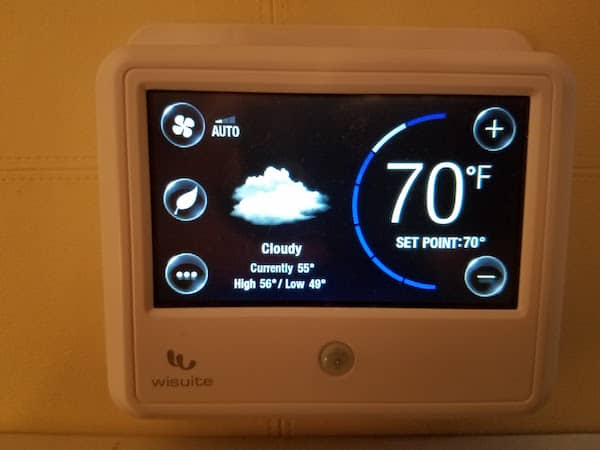 As the room was at the end of the hallway, it did have quite a nice harbor view.  However as the hotel is on a busy street and the rooms can be loud.  Each room had a white noise machine that was quite helpful. 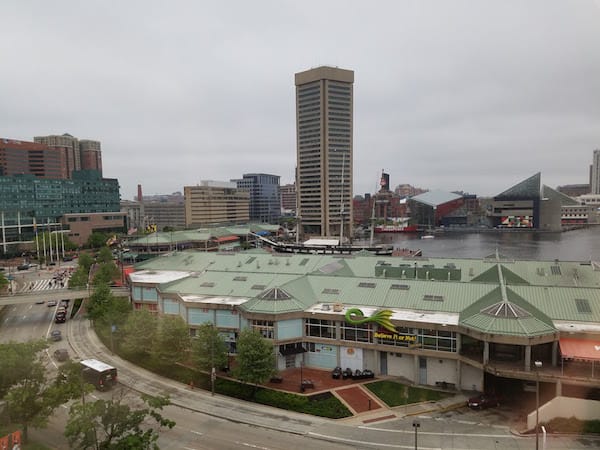 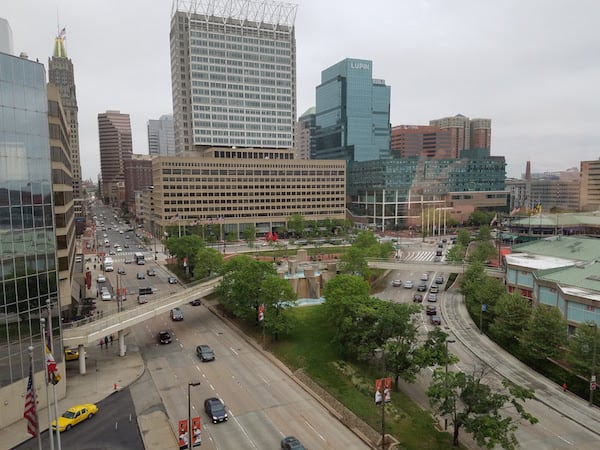 The Bathroom: Both bathrooms were very similar; with the one in the bedroom a bit larger.  Both were shower only (no tub).  The toilets were rather industrial — tankless, built in to the wall like you would see in an airport or office building.  There were plenty of towels and shelf space. 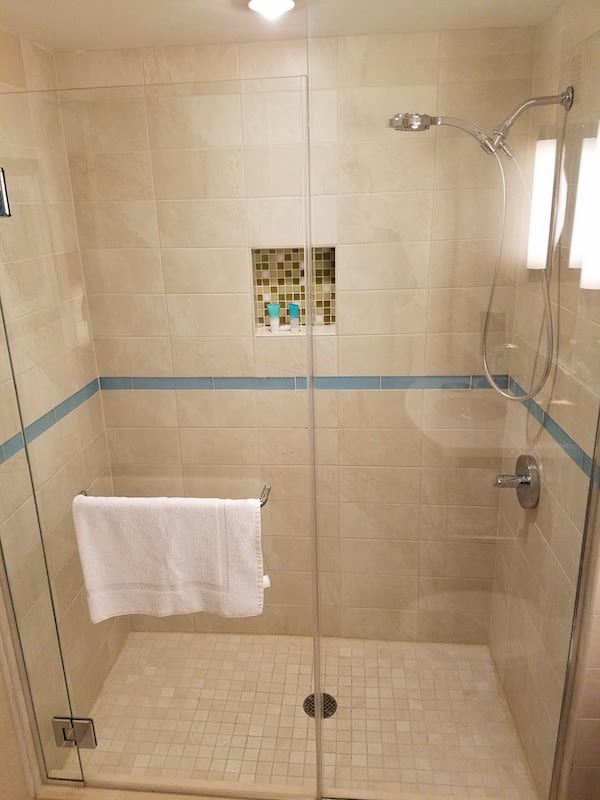 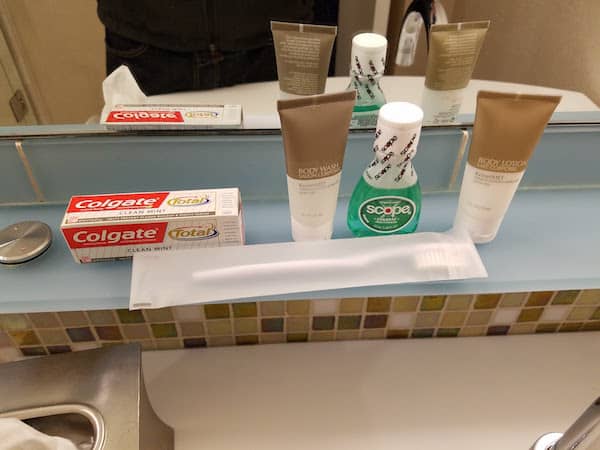 Standard Regency bath products (KennetMD) although I was also provided mouthwash, toothbrush and toothpaste, perhaps because it was a suite.

Regency Club: The Regency Club is located on the 12th floor of the Hyatt Regency Baltimore Inner Harbor.  It has a couple of windows and not a very impressive view.  However, the Club has recently been remodeled and is modern and clean. 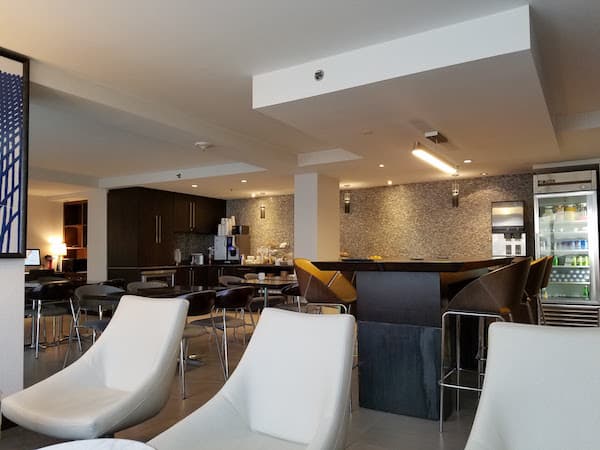 There is a fridge with bottles of water and cans of soda as well as pitchers of juice.  Sparkling water was stocked one day but not the other two days.  There was also a coffee machine.

Breakfast was some pastries and fruit.  There were some basic snacks out throughout the day (crackers and candy).  The happy hour had a few veggies and dip as well as one hot dish.  I saw some people with wine but not sure if it was complimentary or for purchase.  I never saw the bottles.  There were also delicious desserts each night from 8:00-9:00pm. 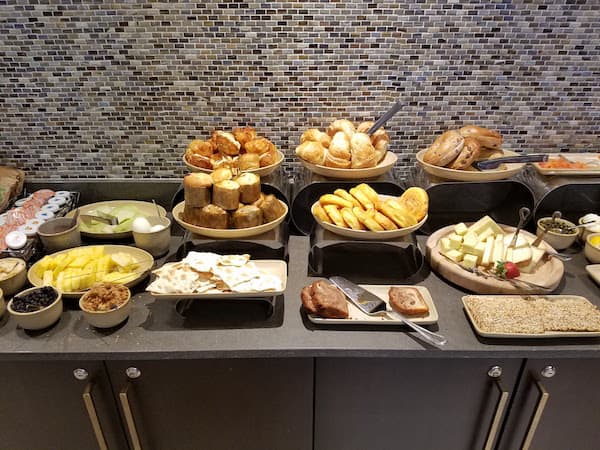 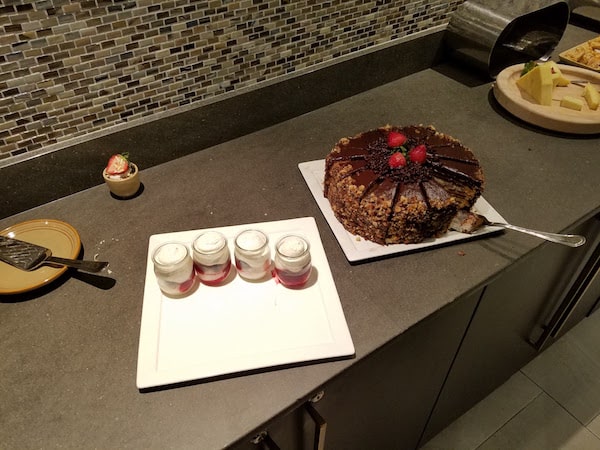 Pool: There was a pool on the 6th floor of the Hyatt Regency Baltimore Inner Harbor, however I tried to go on my last day and my key wouldn’t allow me access.  Sorry, didn’t get a photo.  I understand there is a pool and fire pit (no hot tub).  There is also a gym.

Service: Overall the service was about what you would expect from a Regency.  Very efficient.  Things were kept clean.  I noticed a stain on the carpet in the hall my first day and it was gone the second morning.  But I did not experience the overly friendly service you would have at a Grand or Park Hyatt.

Overall I had a fine stay at the Hyatt Regency Baltimore Inner Harbor.  It has a good location and the room was nice.  Otherwise pretty unmemorable; what you would expect form a business property. 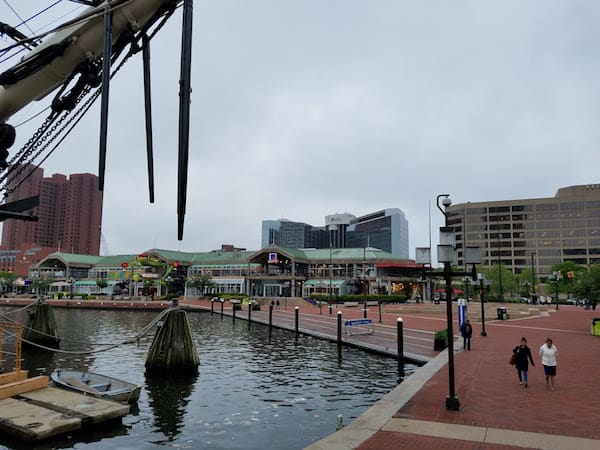