The Manchester Grand Hyatt San Diego was one of the “official” hotels of the conference I was attending and is only a few blocks from the Convention Center.  I booked a Double Bed at Costco rates as it was the best I could find; each night just under $300.  There were two large conferences in town (one at the hotel), so I am guessing you could find some better rates if you go when there isn’t a conference in town.  It is the largest hotel in San Diego (with 1,625 rooms).

The Manchester Grand Hyatt San Diego is located on the waterfront just south west of the downtown core.  It is about 10 minutes from the airport and you can walk to Petco Park, the Convention Center, Gaslamp, and downtown.  There are a bunch of restaurants just across the street.  Across the street there is also a light rail stop.

Check In: Using the Platinum/Diamond check in line it took me about 3 minutes to get my key.  She didn’t go over the wifi or amenities; but I think she could tell I was in a bit of a hurry.  She gave me a total of three keys.  She explained that my room had a connector room; but that it wouldn’t cost me anything extra.  Apparently no one was using it so they gave it to me.  I wasn’t going to complain.

I also had a package waiting for me (I had to ship some supplies for the conference), and they brought my package out quickly.  I could have had it delivered to my room but I needed it then.  There was a $20 hold fee on the package.

Room:  My room was on the 6th floor; I believe this is the first or second floor that has guest rooms.  As the hotel is 40 floors high and two towers, I was a bit disappointed to not be on a higher floor.  Until I got in to my room.

From the hall I had my choice of three doors to get in to my room.  One door labeled 633, one unlabeled, and one labeled 635 (hence the three keys).  633 was the “connector room” and consisted of a full bathroom, living room with pull out couch and TV, dining room/conference table with 8 chairs and a small kitchen with wine cooler and wet bar.  Two large windows looked out at the adult pool, Marina, and Coronado Bridge beyond.

The bedroom was a standard hotel room (the one I had booked).  Two double beds, TV, desk, closet and full bathroom.

I understood what the front desk agent meant by no one was using the connector room.  It couldn’t function on it’s own for a hotel guest since it only had a pull out couch; no real bed.  There was a lock off bedroom like mine on the other side of the connector as well; I am guessing they decided to give it to me because I had higher status or I was staying a shorter time. 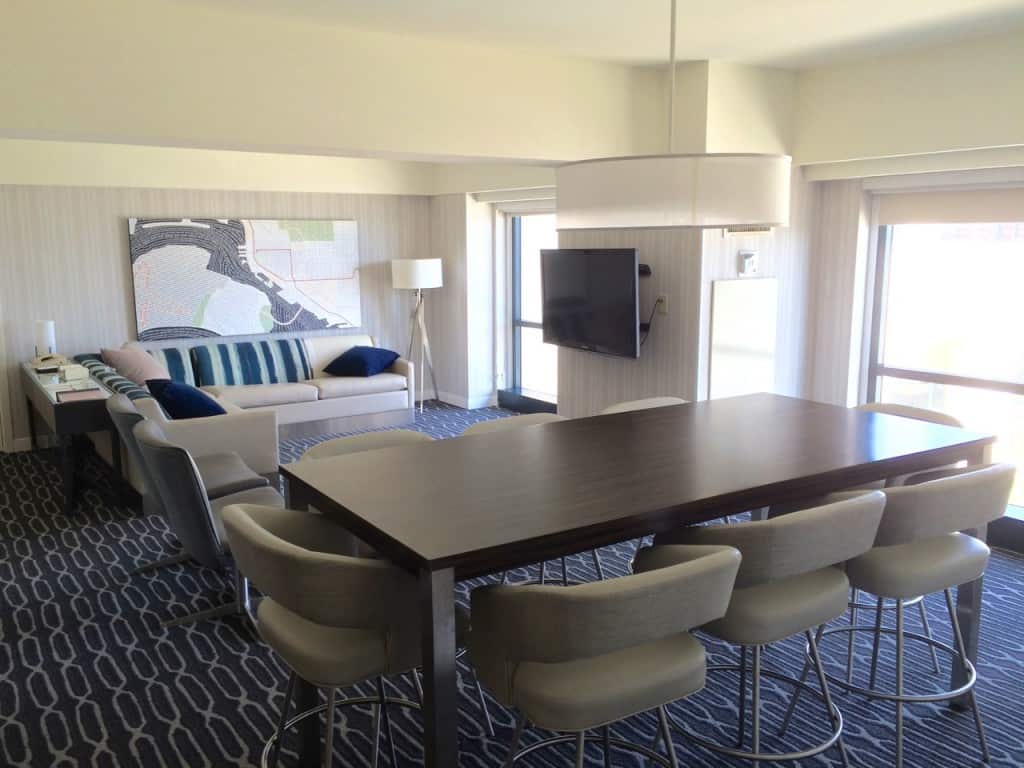 I am guessing if you used a suite upgrade at this property you would get exactly what I got, the connector room and the lock off bedroom.  It would be great for a family (beds for 6 people) or if you were two groups you could add in the other lock off for a total of 5 beds (sleep 10).

The furnishings are all very modern and attractive; light color walls and furniture and dark blue carpeting and accents that ties in nicely with the marina vibe.  I am guessing the rooms have been renovated within the last 3-4 years if not more recently.

Bathroom:  The bathroom seemed small for a Hyatt Grand property.  Single vanity and single combined shower/tub.  The tub is large but not especially luxurious.   Both mouth wash and toothpaste were provided. 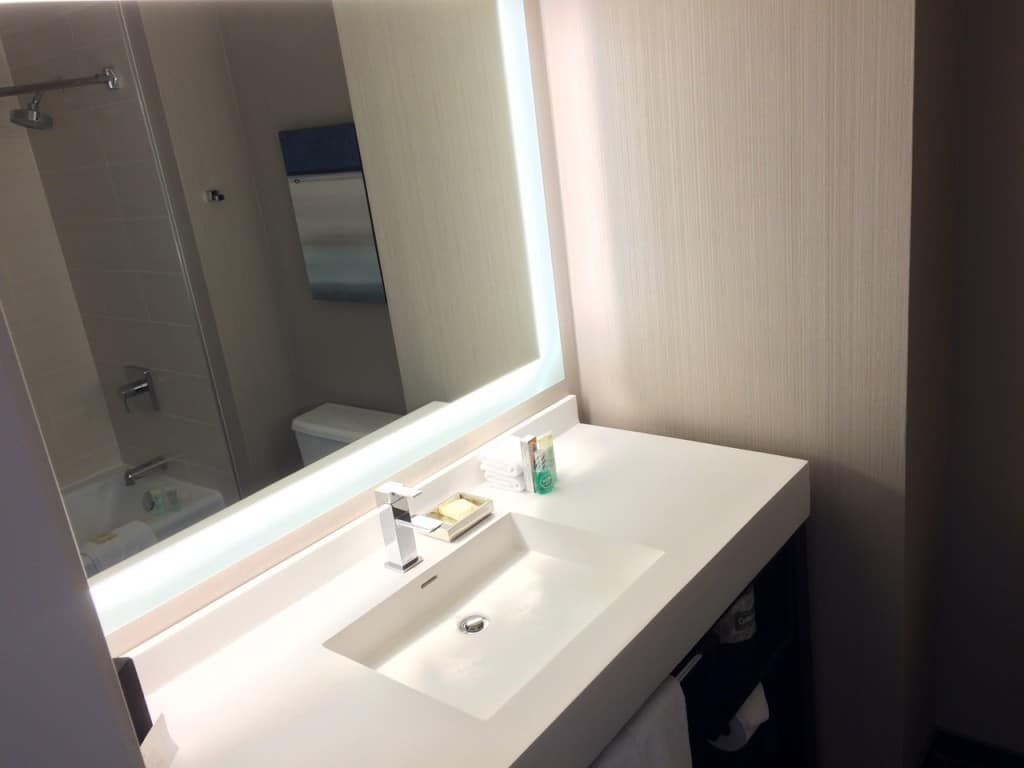 Pool:  There are two pools at the Manchester Grand Hyatt San Diego.  The first is on the 3rd floor next to the spa and is adults only.  This doesn’t mean topless, it just means that kids aren’t allowed.  It is a small pool with great views and plenty of lounge chairs and cabanas that were free to use.  A very tiny hot tub as well.

The second pool is on the 4th floor between the two towers and is the main pool.  Much larger and more chairs, bigger hot tub, etc.  The gym is located near the main pool.  In the morning it is very shady so I preferred the adults only pool.

Service:  I found the service at the Manchester Grand Hyatt San Diego to be top notch.  When I came back to my room at 10:30am after the morning conference session, the room was already refreshed.  When I called to order toiletries I forgot, they were brought up quickly.  The front desk was efficient and professional.

Bottom Line:  This is a huge property that doesn’t have much soul or character.  However it is a very clean and modern hotel with great amenities.  The service is professional (although a bit impersonal).  The views and location can’t be beat.  A sterile but flawless property.