I purchased my round trip ticket for €1122, or about $1250 USD.  The route was FRA-LHR-KUL and back.  The first segment (FRA-LHR) was in Club Europe (Business).  The second segment (LHR-KUL) was in British First on the brand new, yet to be delivered, 787-9 which offers just 8 first class “suites”.  For 12 hours it would be a very good way to fly (although as some point out, it is similar to business on some of the gulf carriers or worse).  I have never flown international F and was excited to try it out, on a brand new plane no less. 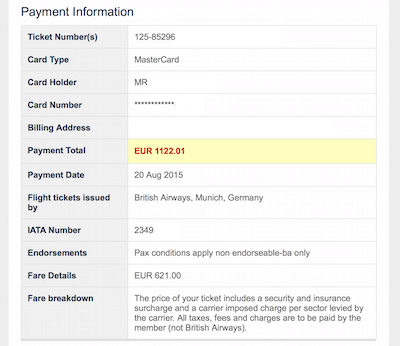 I wasn’t dying to go to Kuala Lumpur, but it would be an adventure.  On top of that, I would earn over 35,000 Elite Qualifying Miles on Alaska (and a total of 50,000 redeemable miles).  Alaska Mileage Plan is my loyalty program of choice.

My booking was ticketed and my credit card was charged (in fact, currently the charge still shows as pending on my account activity).

I know the number one thing about possible  discounted fares is to not book any non-refundable positioning flights or hotels.  I did go ahead an book (using Alaska miles) my positioning flight to Frankfurt from Seattle on American in business.  Alaska award bookings are refundable up to 60 days out (minus a $25 fee).  So I figured if the ticket got canceled, I would be out $25 at most.  I started to research hotel options.

When I got past the 24 hour window of booking, I thought I might be safe with this ticket.  After all, it was still a good amount of money.  British has had sales for similar prices, so maybe this was just a really good sale.  I could hope right?

Then this morning, about 30 hours after the booking, I checked my booking and my flights were canceled. 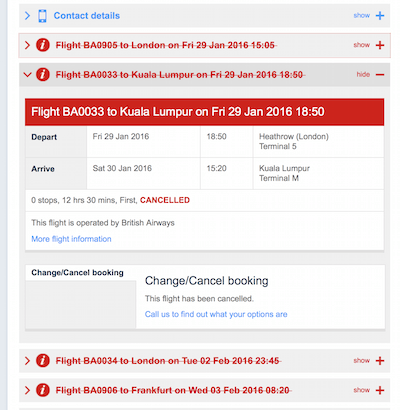 It said to call to “find out what your options are”.  The first person I spoke with at British assumed that there was something wrong with my credit card, but when there wasn’t, he transferred me to another customer service representative.

She explained that my ticket had been incorrectly priced online at an invalid fare.  Therefore, the ticket was canceled.  She offered me the option to rebook the ticket at full price (about $9,000 USD).  After the initial frustration, I asked more questions about the process of cancelation.  She said that she had just received an email less than an hour ago explaining that British Airways would be canceling all these tickets.  I asked what they would do since I had already booked other travel arrangements.  She said I would need to speak to another customer service rep to see if they could help with that.

I asked to speak with her manager.  She did go and speak to someone, but when she came back she said that nothing else could be done.  I didn’t push to speak to the manager, clearly they had drawn a line in the sand.

Apparently an email is going to be sent out to all of those who booked and have had their flight canceled.

I knew booking this flight came with risk.  But I couldn’t at least try.  I was able to get my positioning flight miles back, so I end up losing nothing (except for the wait time to get the money refunded to my credit card).

However, here are my frustrations with British Airways:

6.15. Whilst we endeavour to ensure that the correct prices are displayed on our website and/or advised to you by our call centre, on very rare occasions there may be an incorrect price bookable. If there is an obvious error with the price at which you book (including where we have confirmed that booking) we will promptly notify you of that error and where possible you will be given the choice to retain the booking and pay the correct price within the time period indicated. Alternatively you can cancel the booking and receive a refund of any monies paid or select an alternative holiday, paying or receiving any difference in price to that originally paid. If you do not elect to retain the booking within the time period indicated we reserve the right to cancel the booking and will refund you any monies paid.

I would not consider this an obvious error.  $1250 for a round trip ticket is still a lot of money.  I told a friend about this fare after I purchased it, and her reaction was “Wow, that’s a lot of money!”  Granted she doesn’t fly international very often, and when she does it is in economy.  For the general population, this fare is NOT an obvious error.

I have not flown British in years.  Will having my British Airways ticket canceled cause me to now fly them in the future?  Probably not.  However, it does seem a bit dubious at best.

Update: It has now been 5 days since the purchase of my ticket.  Still have not yet heard anything regarding my ticket.  I reached out to BA public relations and received this response:

Unfortunately there was an obvious pricing error on some first class flights between Germany and Australia as well as parts of Asia.

We are apologizing to customers and will be giving them a full refund.

Update 2: Today I was issued a refund for my ticket, 10 days after the purchase and a week after cancelation.  Due to the exchange rate I actually came out about $3 ahead.

The good news is that I got in on the AA deal from Prague to Cancun, so I guess that is a runner up prize!