One way to approach solo travel is to plan a trip to a location where a friend lives.  This way you can experience the best of both worlds; having a connection to base your travels off of while at the same time getting to explore in your own way.  This is how I approached my solo travel to Cambodia.

A friend of mine moved to Cambodia in 2010 to teach English to college students.  I had been to Vietnam (on a group trip) a few years before and was interested in seeing Cambodia.  Visiting my friend was a win/win — I was able to spend some time with her while also being able to stay at her apartment and have her show me some of the country.

I planned a two week trip.  The first week was over her school break and the second week was while she was working.  My plan was to spend the first week with her; seeing Phnom Penh with an ex-pat local.  The next week I would do some travels on my own while she was back at work — including a trip to Siem Reap to see the Temple of Angkor Wat.

Flight:  I flew from Seattle to Taipei direct on EVA Air, then direct from Taipei on to Phnom Penh, the capitol city of Cambodia.  The flight got me in mid-day.  To visit Cambodia you do need a visa, however you can obtain the visa at the airport for $30 USD (as of 2014).  At the time I did not need an extra passport photo, however I have heard that now you do.  Good to research before going as things can change quickly.

Getting Around:  The Phnom Penh airport is modern and everything is written in English.  Once I got my visa I was able to exit the airport and my friend was graciously waiting with her favorite tuk tuk driver.  If you don’t have someone waiting for you, it would be easy enough to hire a taxi.  It is about a 12 km trip from the airport to the city center.

Once in Phnom Penh, the main ways to get around are taxi, tuk tuk, or motorcycle.  The tuk tuk and motorcycles are on every corner — it seems like anyone is willing to give you a ride if you are willing to pay.  I would NEVER suggest renting a car in Cambodia.  Don’t even consider it.

I also suggest negotiating the fare before you agree to the trip.  Transportation is not regulated and it is good to set an agreed price so you won’t get fleeced at the end of your trip.  All of the drivers I encountered were friendly and just trying to make a buck.

Taxi is the most expensive option and very similar to any taxi in any city — enclosed car with a driver and usually air conditioning.  Within the city, the only people that take taxis are tourists or people on business.  If you are wanting to go to another city you can hire a taxi to take you there.  I believe it would be about $60 to go from Phnom Penh to Siem Reap.  I never took a taxi.

The tuk tuk is the moderately priced option.  You can get from point A to point B within Phnom Penh for no more than $4 USD.  And yes, it is easiest and most accepted to just pay in USD.  Even the ATMs give you USD.  A tuk tuk is a small cart that can hold up to 4 people that is pulled behind a motorcycle.  There is a cover on most that keeps the sun/rain out.  This is the best option for groups, long trips, or if you have luggage. 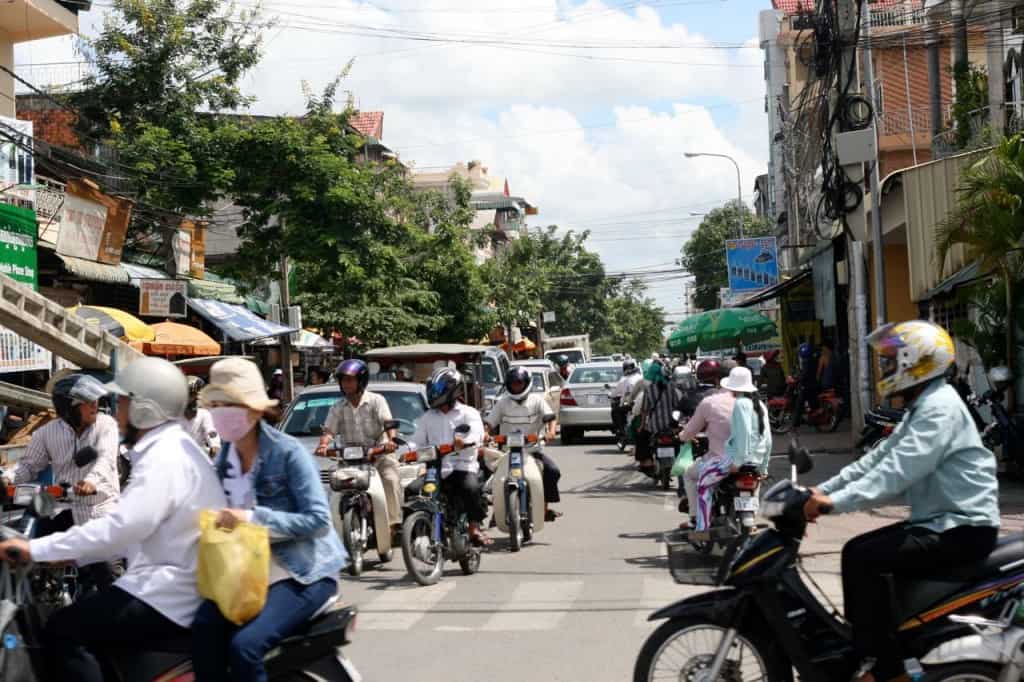 The motorcycle (perhaps more aptly described as a motor bike) is the cheapest option and also the most fun/unsafe.  For $2 you can get anywhere in the city.  If you are going to be in Cambodia for any amount of time, you would be wise to purchase a helmet.  I didn’t but if you value your life it would be a good idea.  This is the method of transportation my friend and I used in the city.  Both of us would hop on, most of the times my legs would just dangle and at stops I would put my feet down to keep us from tipping over.  As the motor bikes zig and zag through traffic you will think you are going to die.  Enjoy it.  This is how the locals get around.

As far as getting from one city to the next (for example from Phnom Penh to Siem Reap… the two cities you will want to visit), there are a couple of options.

Most locals take a bus between cities.  This is how I got around.  The most reputable and fastest option is the Mekong Express.  From Phnom Penh to Siem Reap it is $13 and takes about 6 hours and (usually) only makes one top along the way.  There are other options where you might save a couple of dollars, but I have heard stories of them taking 8-10 hours, stopping at every village along the way.  It is not luxurious, but I believe they give you a water bottle and pastry and the seats are fine.

Other options include taxi, flights, and even a boat during certain seasons.  Or even… an elephant? 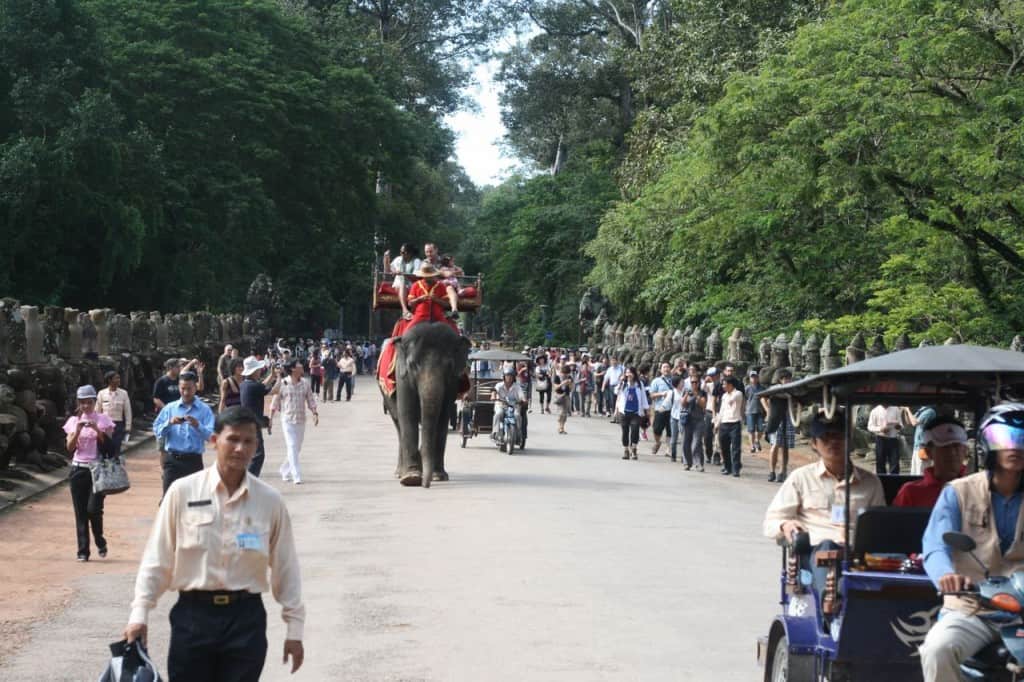 Eating:  Cambodia has great food options and even dinner at a nice restaurant will come in under $20.  Most of the time you can expect to pay less than $5 for a meal.

There are some great non-profits that have been set up in Cambodia; many of which run restaurants to help pay for the work they do.  My favorites are Friends and Romdeng.   The latter has more authentic Cambodian cuisine (you can order ants and spiders) and is located in an old colonial house.  I suggest a table by the pool.  The staff at both of these restaurants are children/young adults that have been rescued from various types of slavery or abusive situations.  It is part of the ChildSafe program; I suggest looking for these signs in any establishment you enter.

I also really liked The Boddhi Tree which is directly across from the historic Toul Sleng museum and is a nice sanctuary in the middle of the city.

Another fun restaurant/cafe is The Blue Pumpkin.  They have great pastries and ice cream.  There are outlets throughout the country.

Lodging:  For the most part I stayed with my friend.  In Siem Reap you will find a ton of options, from fancy chain hotels that are very western and can go for $200+ a night, to small boutique hotels that offer great service and amenities and cost $40 a night, to basic hostel type accommodations that can go for $5 a night.  Phnom Penh has less of the brand hotels but you can still find some great options.  I would again suggest The Boddhi Tree — they have three guesthouse locations and each one has a small number of rooms.

Cambodia is also very LGBTQ friendly; you can find many accommodations that cater towards this population.

There are also many options for great spa experiences; just do your research to make sure you are going to a legitimate establishment.  Bodia Spa is high end, but you can get a spa treatment for $30 and will feel comfortable the entire time.  Other local establishments can be much cheaper and also very good.  I would again suggest patronizing some of the non-profit outlets that are also ChildSafe.

Safety:  Cambodia is still very much a developing country and crime is common.  For the most part, however, once you are out of the tourist areas people won’t bother you.  As a single traveler, you will want to take the normal precautions and be aware of your surroundings.

Cambodia attracts some seedy business that caters to western and Chinese clientele.  Walking around the Riverside area or Wat Phnom of Phnom Penh you will see prostitution and child trafficking in broad daylight.  Another reason that I wanted to support ChildSafe organizations. 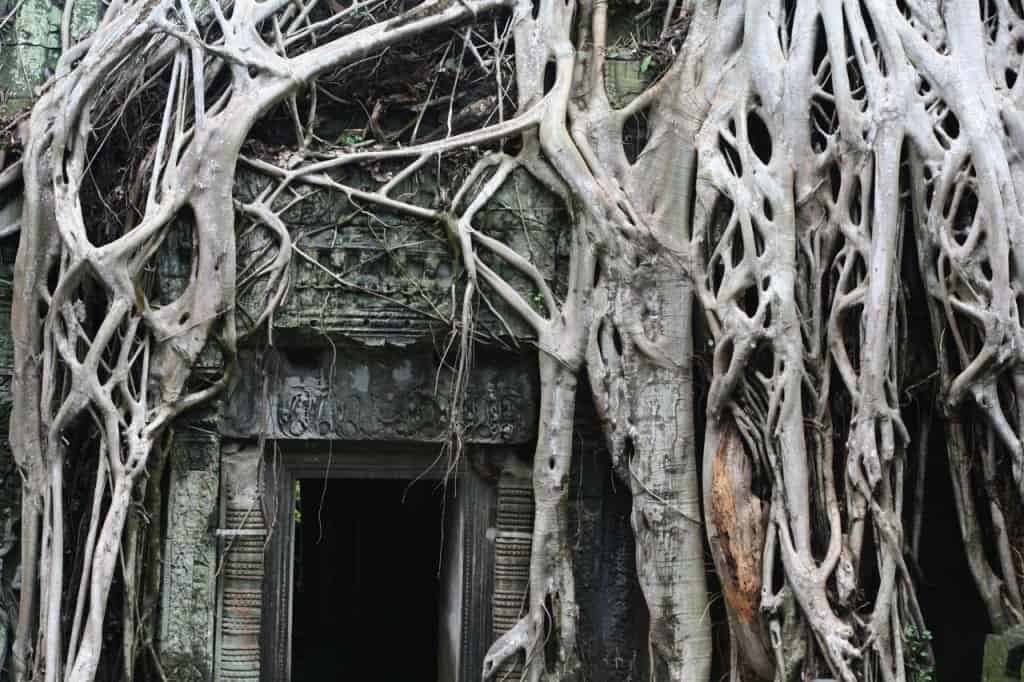 Sights:   There are some amazing places to visit while in Cambodia.  Of course the can’t miss is a day (or 3) at Angkor Wat outside of Siem Reap.  If you only have a day, you should hire a tuk tuk driver/guide that speaks English and can take you to, at the minimum, the big three temples: Angkor Wat, Bayon Temple (with it’s many faces of bodhisattva), and Ta Phrom (left in it’s “wild” state with trees and vines growing throughout… think Tomb Raider as it was filmed here).

The other two sights you must see are related to the Khmer Rouge and the murder of millions of citizens during the 1970’s.  Toul Sleng is an old high school that was converted into a prison and death camp.  It has been left more or less in the same condition as it was in during the genocide.  While some exhibits have been set up; it is definitely a raw experience.  It is also located right in the city.  Plan to spend a few hours. 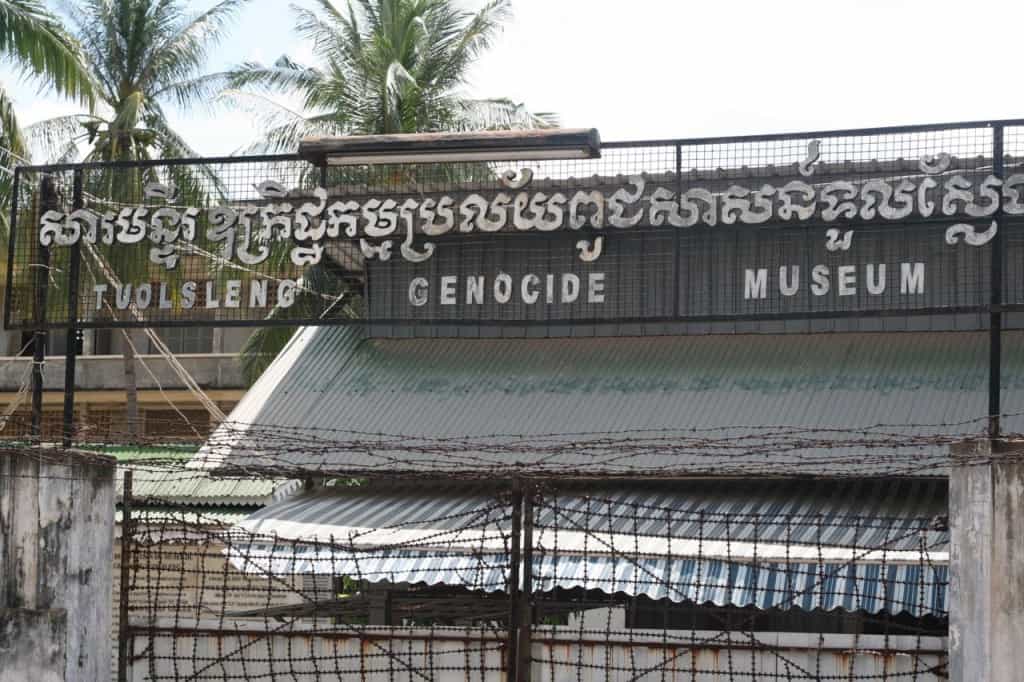 After learning more about the Khmer Rouge, you will want to visit the Killing Fields.  You will need to hire a Tuk Tuk to take you there; it is a few km outside of the city.  Start with watching the film in the visitor center (it is rather poorly made but part of the experience) before heading out to walk around the mass graves.  Like Toul Sleng, the graves have been left mostly intact.  Stay on the paths.  I was there during a rain storm and it is common for human bones, clothing, and teeth to rise up from the graves.  I visited thinking this would be a similar experience to visiting the concentration camps from WWII.  This is much more raw and less “sanitized” than those. 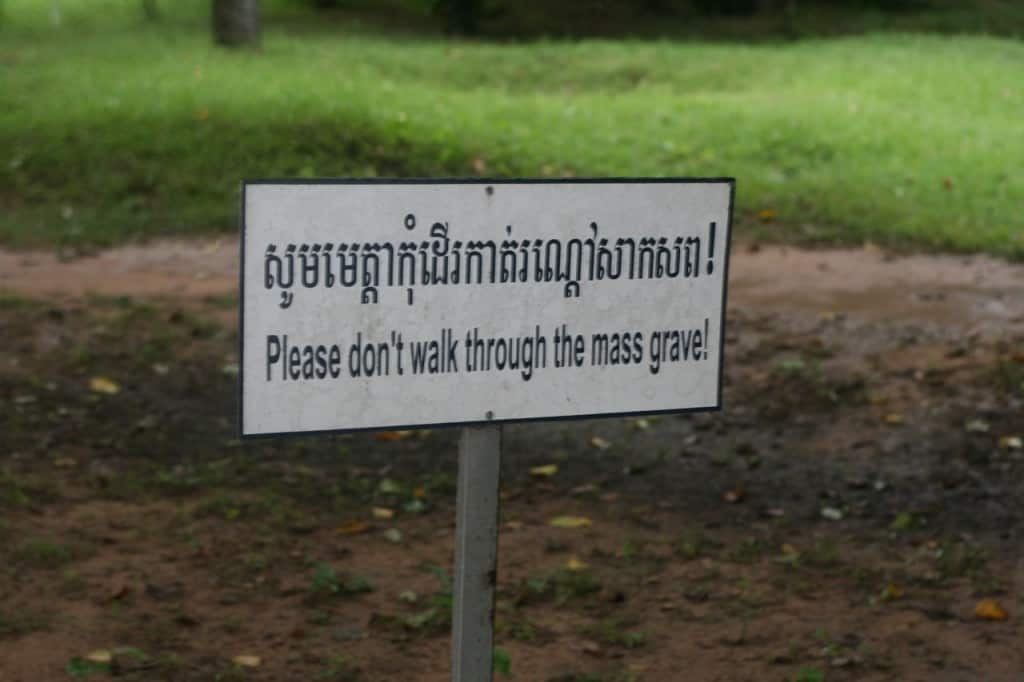 A note on the topic of the Khmer Rouge.  This is recent history; anyone over 30 years old lived through this and experienced the terror first hand.  Something to hold in your mind during your visit to Cambodia.

Other sights I would suggest are the Russian Market, Riverside, the monkeys of Wat Phenom, the Central Market at night, and Street 178 with its art and non-profit establishments.

In Conclusion:  Solo travel to Cambodia is a manageable task for an intermediate traveler.  There are a lot of ex-pats living in Phnom Penh and you will have no problem making friends and people are generally happy to help you out with directions or suggestions.

Still, Cambodia is very much a developing country and with that comes challenges.  One of my favorite memories was being in a small bus during a rain storm.  The road was flooded — 4 feet deep of water.  For some reason the driver decided to drive through it.  The engine flooded and the bus stalled.  Water gushed in; soaking all luggage and belongings.  The driver asked me to get out and help push the bus out of the water.  In flood water up to my chest I was pushing a bus with three other men.  Have patience and enjoy the experience. 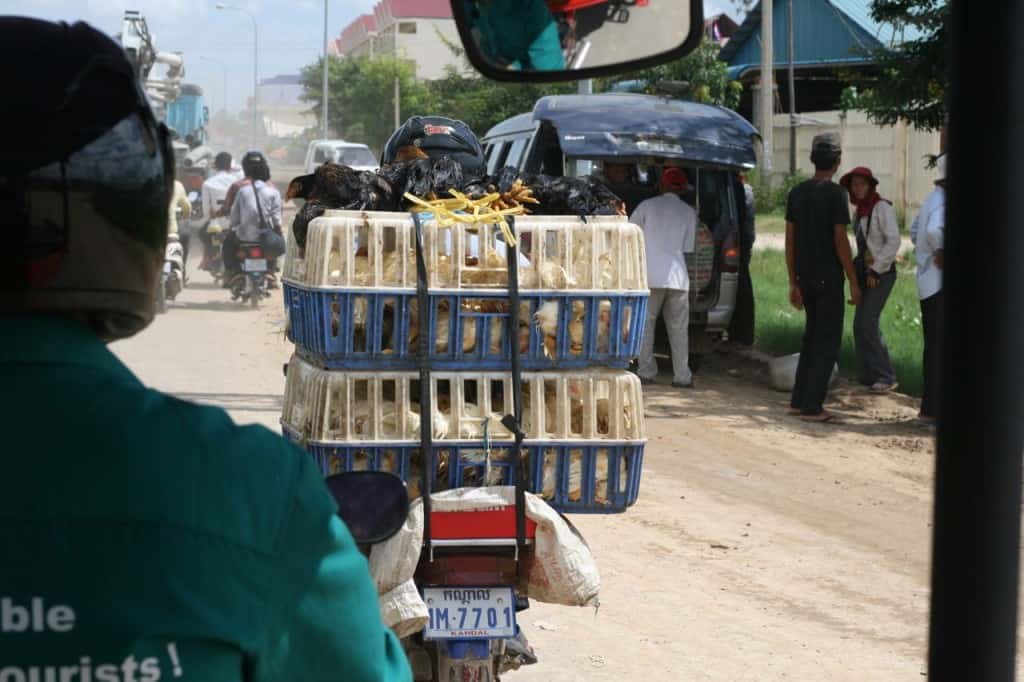