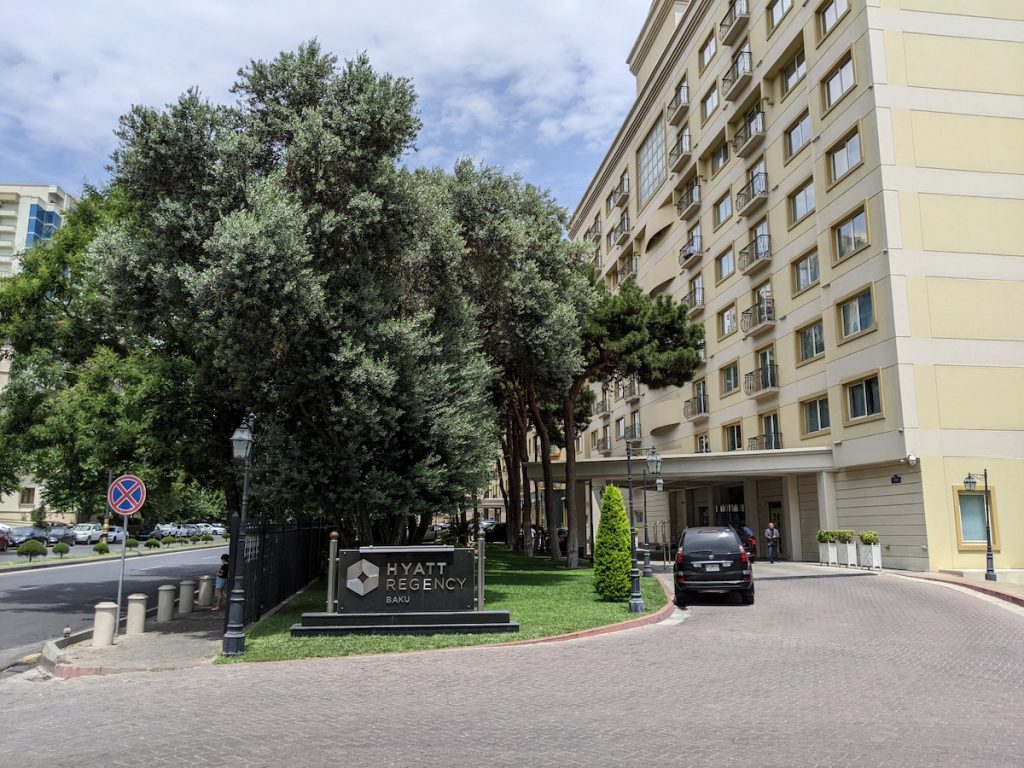 I started my travels through the Caucasus in Baku, Azerbaijan.  Wizz Air flies direct from Abu Dhabi.  Baku is located on the Caspian Sea and has a historic old town as well as a ton of unique new architecture.  Someone accurately described it as a mix between Paris and Dubai.

The Hyatt Regency Baku is a former Park Hyatt.  Originally there was a different Hyatt Regency in the same complex but it is now closed.  A Park Hyatt at this location makes no sense so it isn’t surprising that it failed.

The property is a Category 1 which means it is between 3,500 and 6,500 World of Hyatt points per night.  The rates were around $110/night during July.

The Hyatt Regency Baku is located about 2km out of the downtown area.  I’m not sure why they picked this location for the Hyatt Regency; it doesn’t make sense for a large Western hotel.

From the airport, it is about 25km drive.  There isn’t really public transportation that would get you to the hotel.  My Bolt ride was from the airport was 7₼ (about $4.25 USD).

There are a number of hotels in the city center including a Hilton, Four Seasons, InterContinental, as well as non-chain properties.  Unless you are tied to Hyatt, those would be a better location. 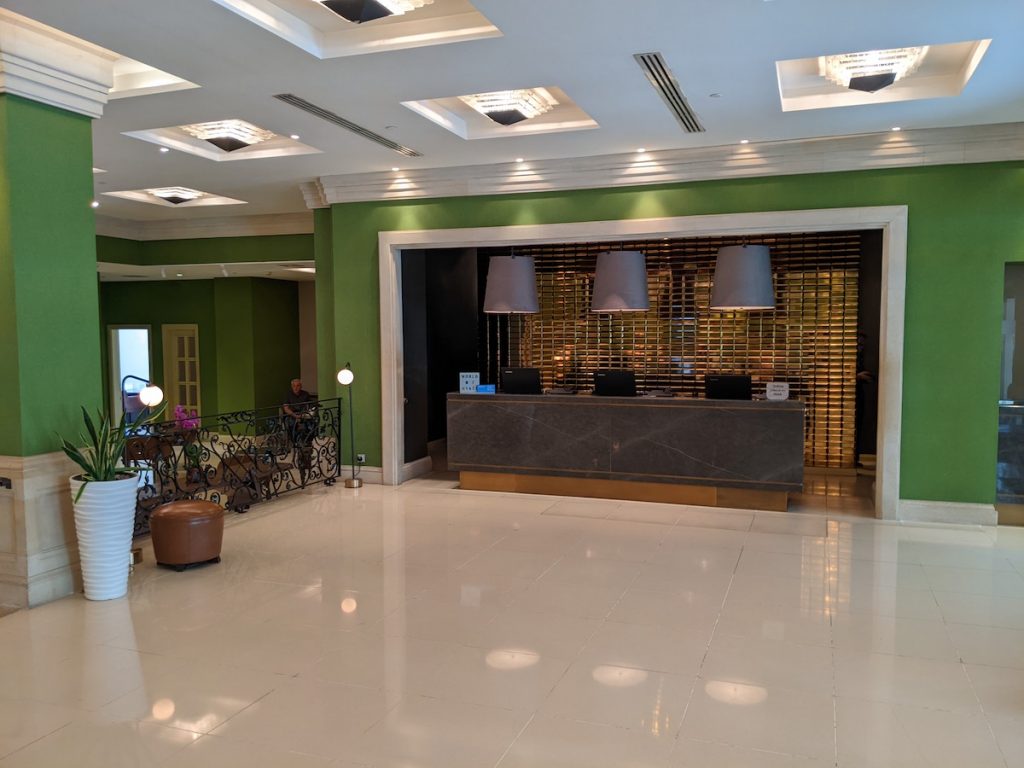 My flight got me in early and to the hotel around 10:30am.  I was able to do early check in on the app and my room was ready which was nice after an early morning flight.

I was assigned a standard room.  When I asked about an upgrade, they were able to get me in a suite that was also ready early.

I asked about amenities on site like the pool, Regency Club, and breakfast.  I found people at the Hyatt and elsewhere in Baku to be of few words.  At first I took it as unfriendly but I think it is more of a cultural difference.

The lobby is clean but a bit generic. 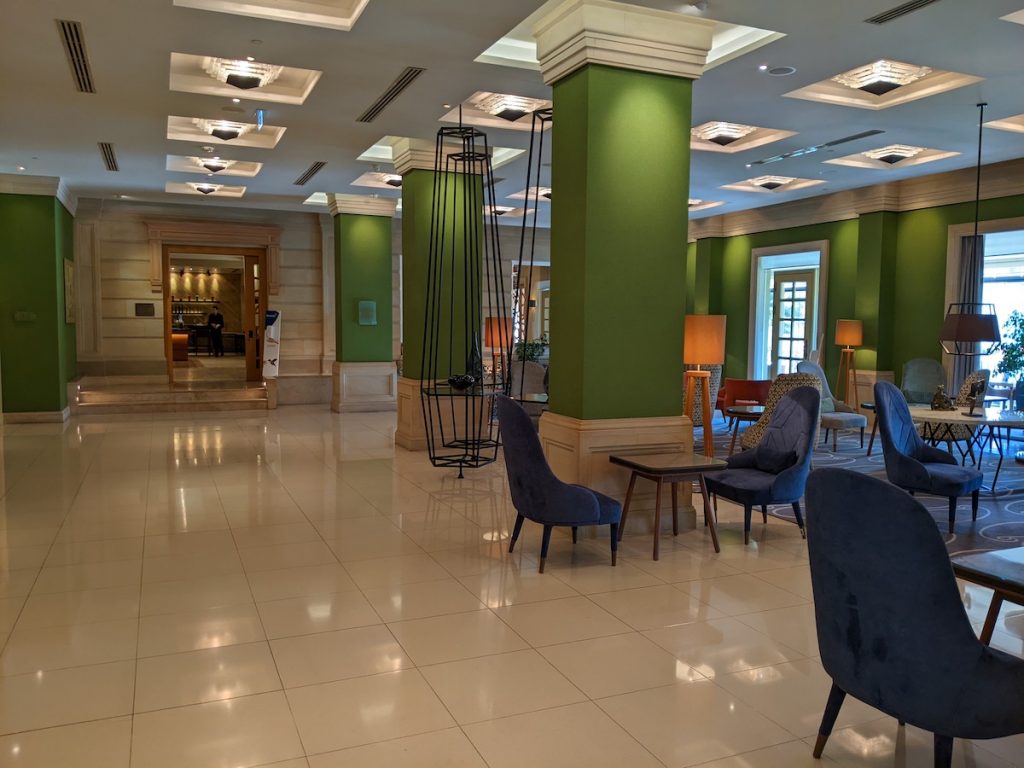 I was assigned Room 1705, a Regency Suite King.  Stepping on the elevator I was confused because it only went up to Floor 8.  I pressed 7 and was correct.  They add a 1 in front of the room numbers (so room 1705 is on the 7th floor). 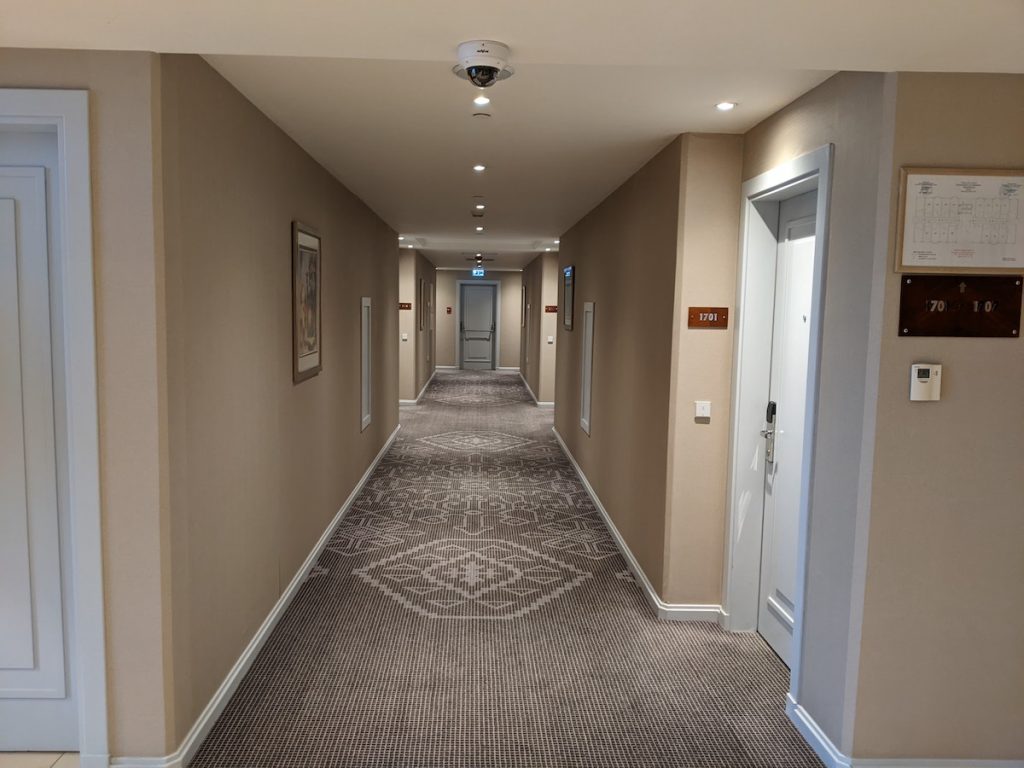 There is a small entry with a closet and powder room.  Then you enter the living room. 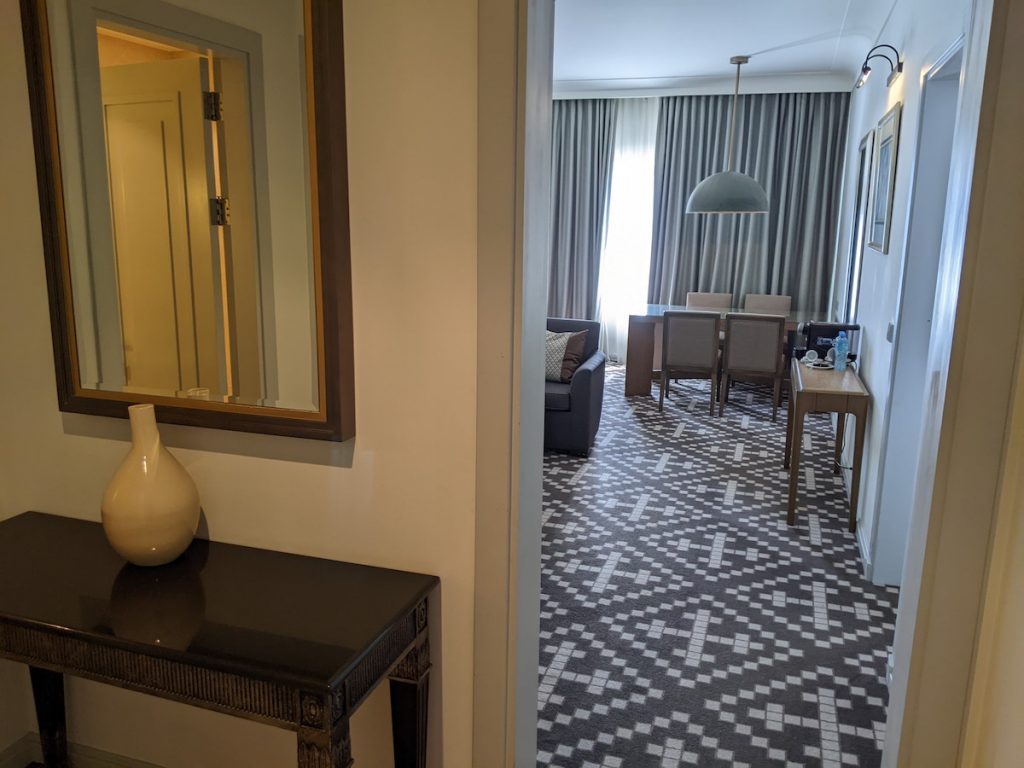 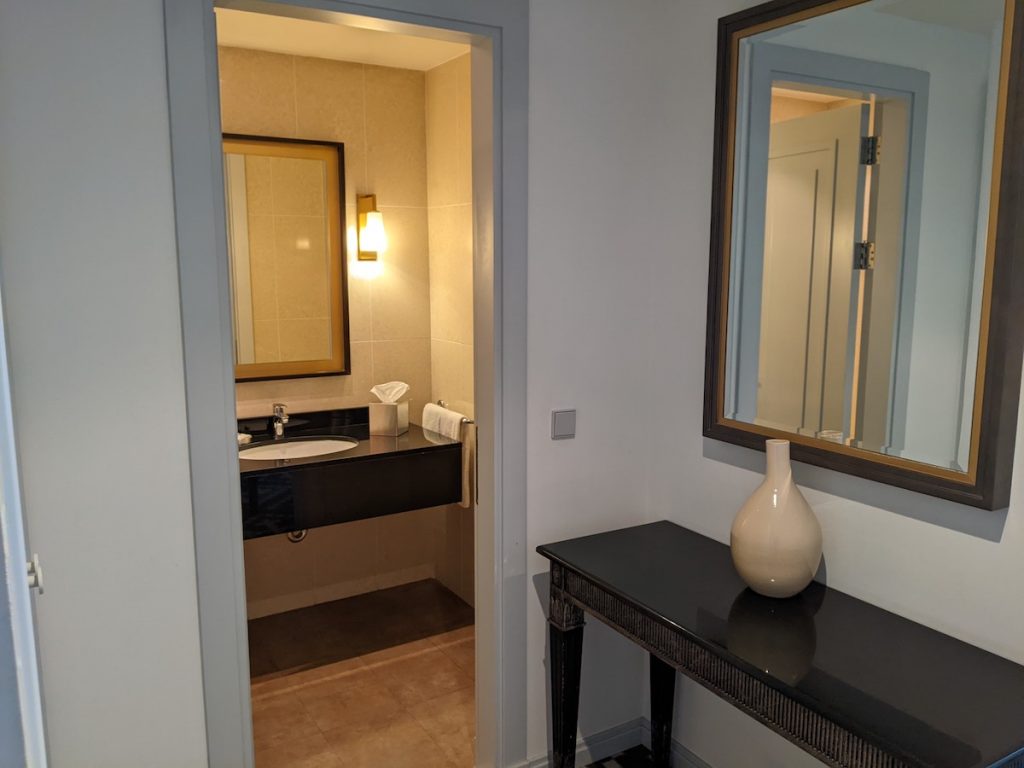 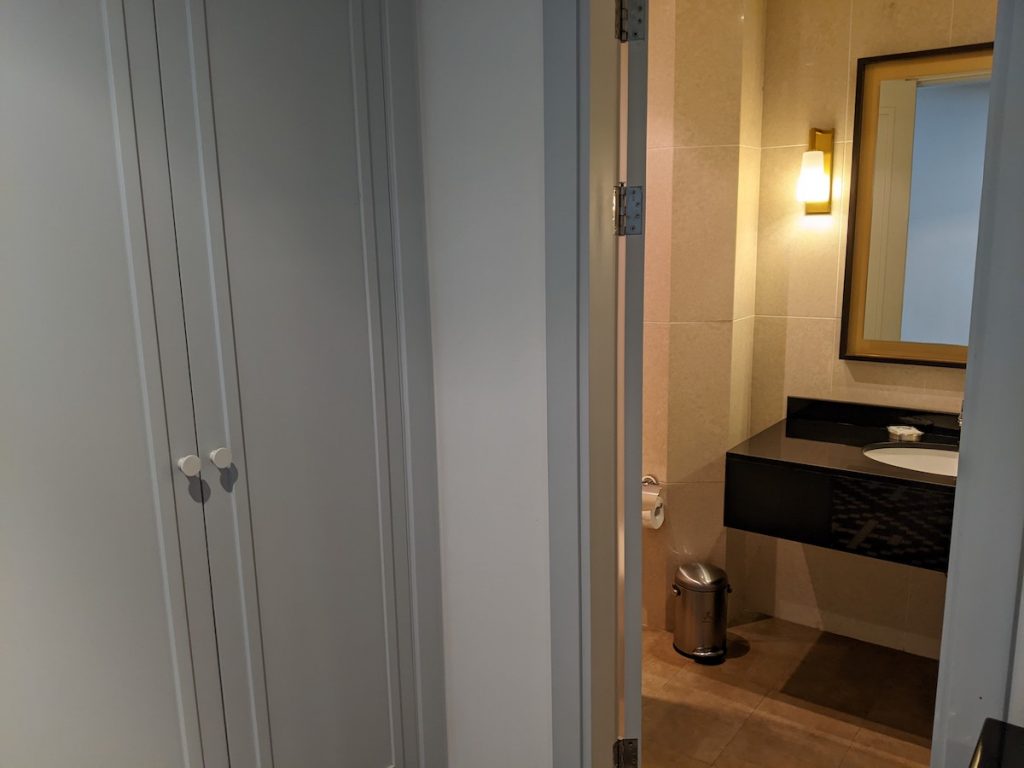 The living room has a dining table with four chairs and a seating area with a TV.  The TV came on every day at 10:30am. 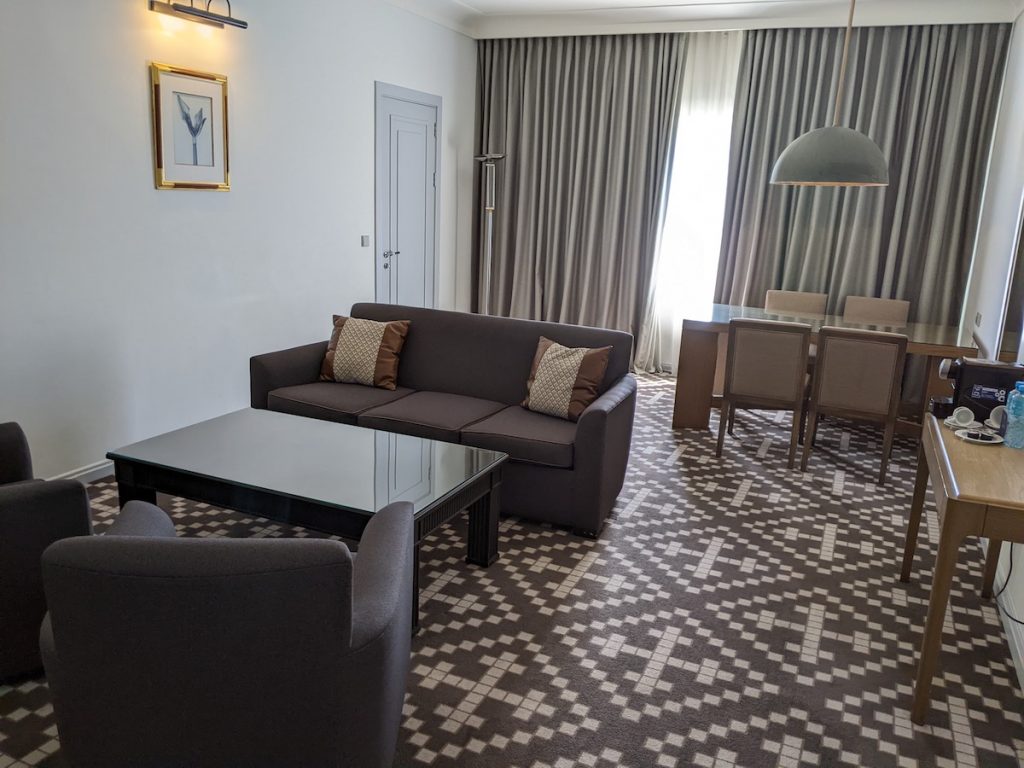 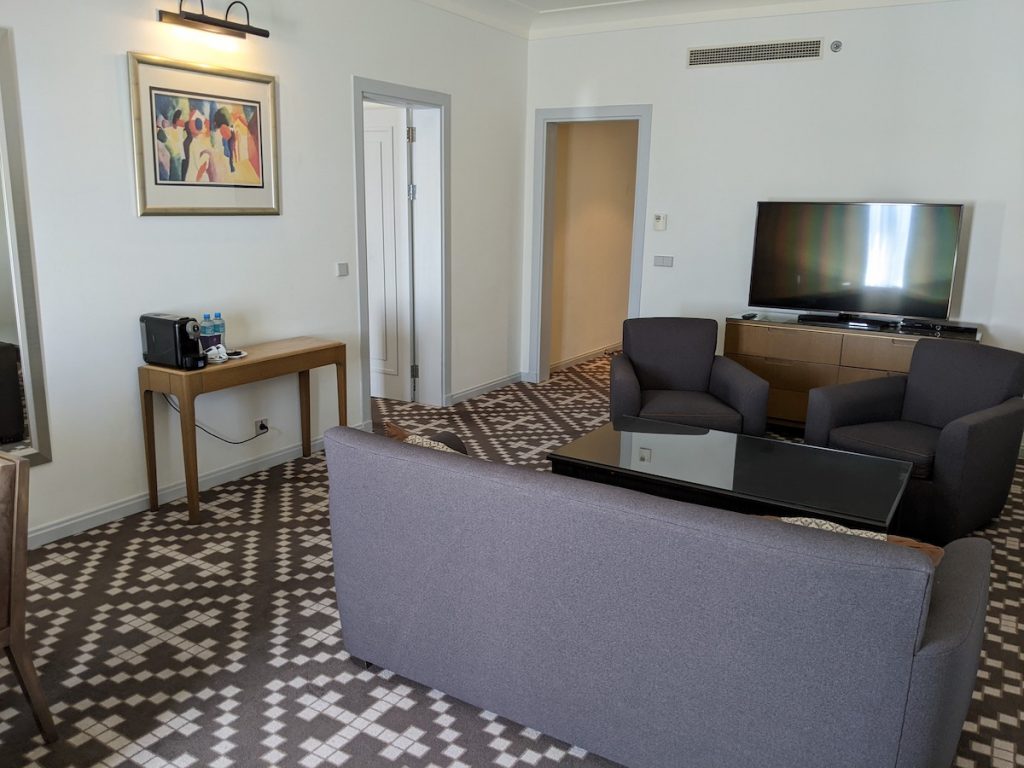 The bedroom can be closed off from the living room. 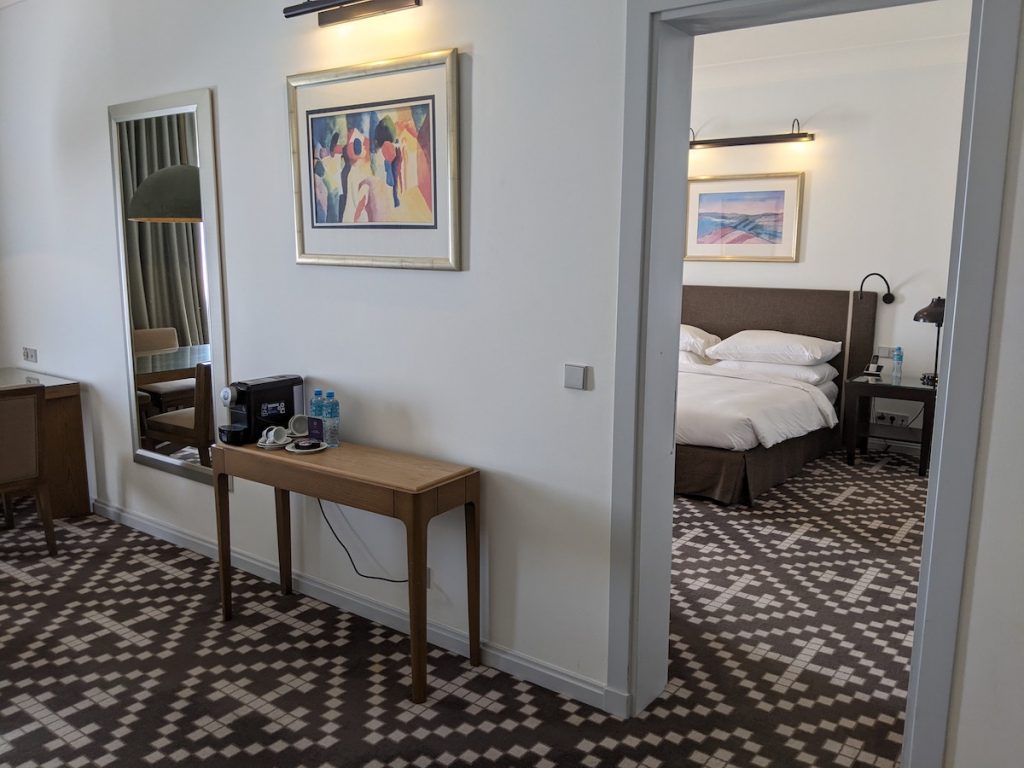 The king bed is against one wall facing a TV with storage that includes a safe and mini fridge. 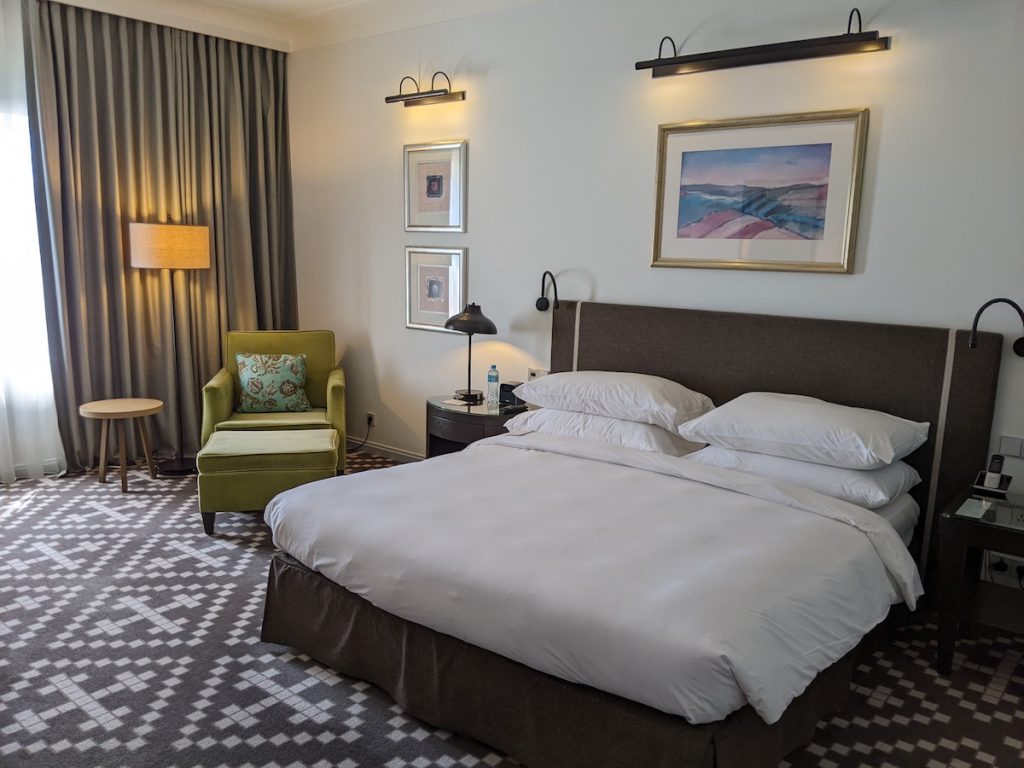 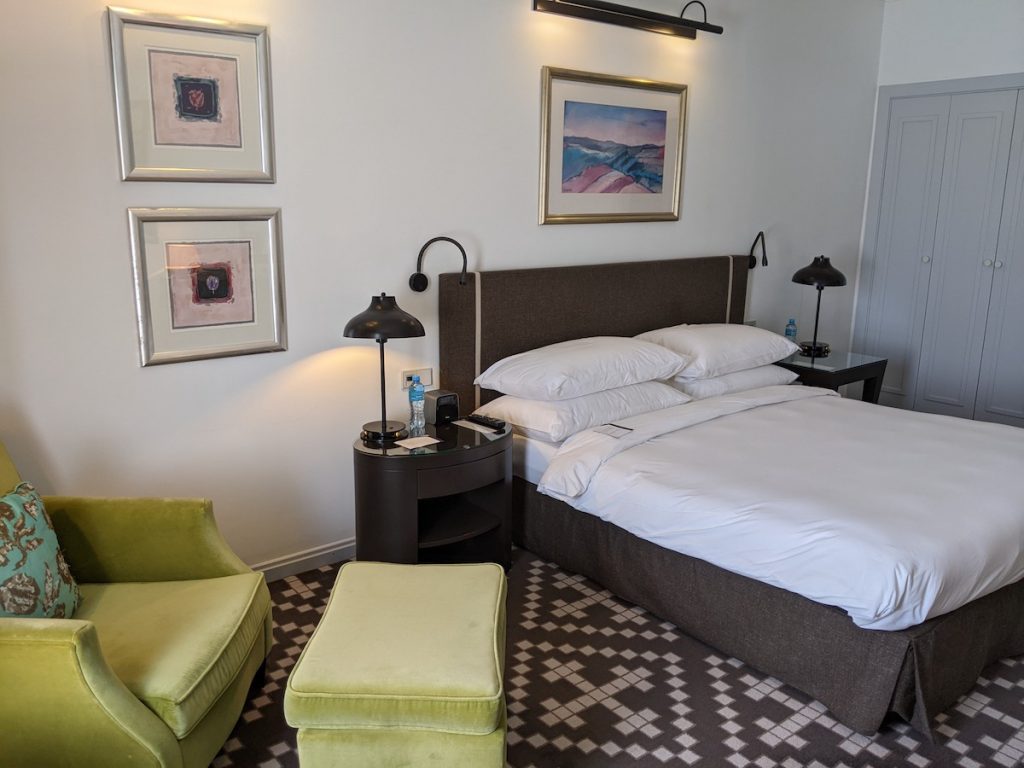 A desk and chair are against the window wall.  On the desk was a small wooden box labeled as a “Low Tech Kit” that had a pencil, eraser, sharpener and some paperclips.

On the side of the bed were both universal power outlets and USB outlets.  An additional universal outlet was by the desk.

The view from the room is of the surrounding neighborhood.  Unfortunately you don’t get a view of the Caspian Sea or any of the more modern buildings. 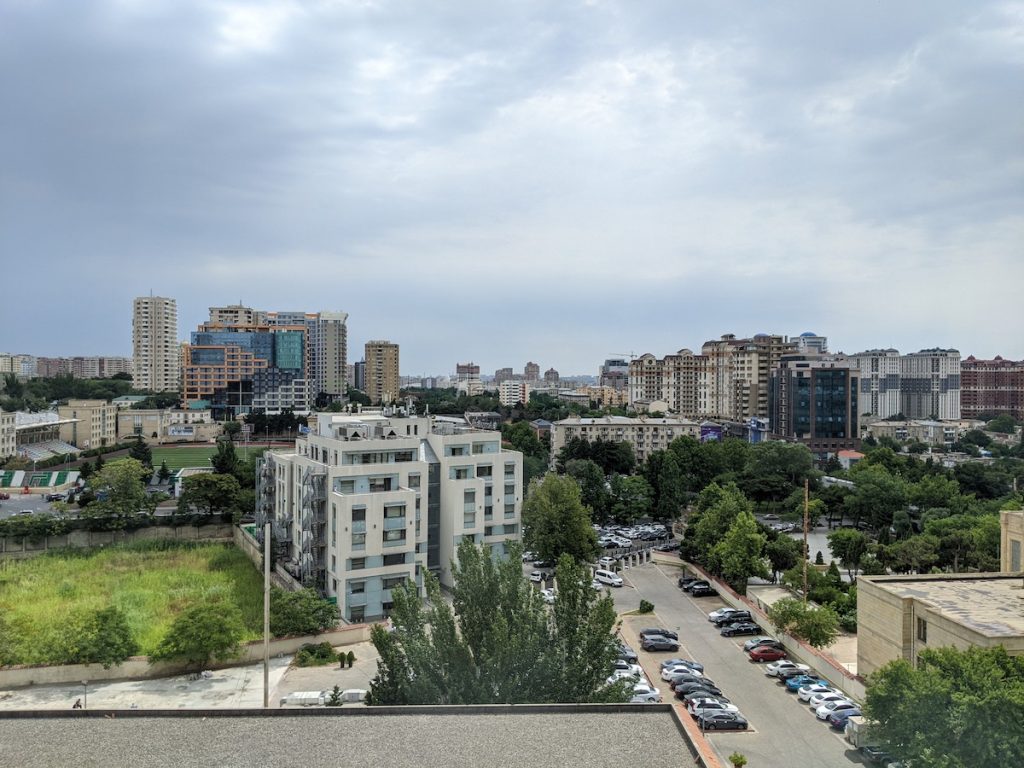 The thermometer couldn’t be lowered past 18.0℃ which was a slightly too warm for my taste.

In addition to the powder room, the main bathroom is off of the bedroom.  Straight ahead are the two sinks and counter.  To the left is toilet and bidet along with a small TV and to the right is a tub and separate shower. 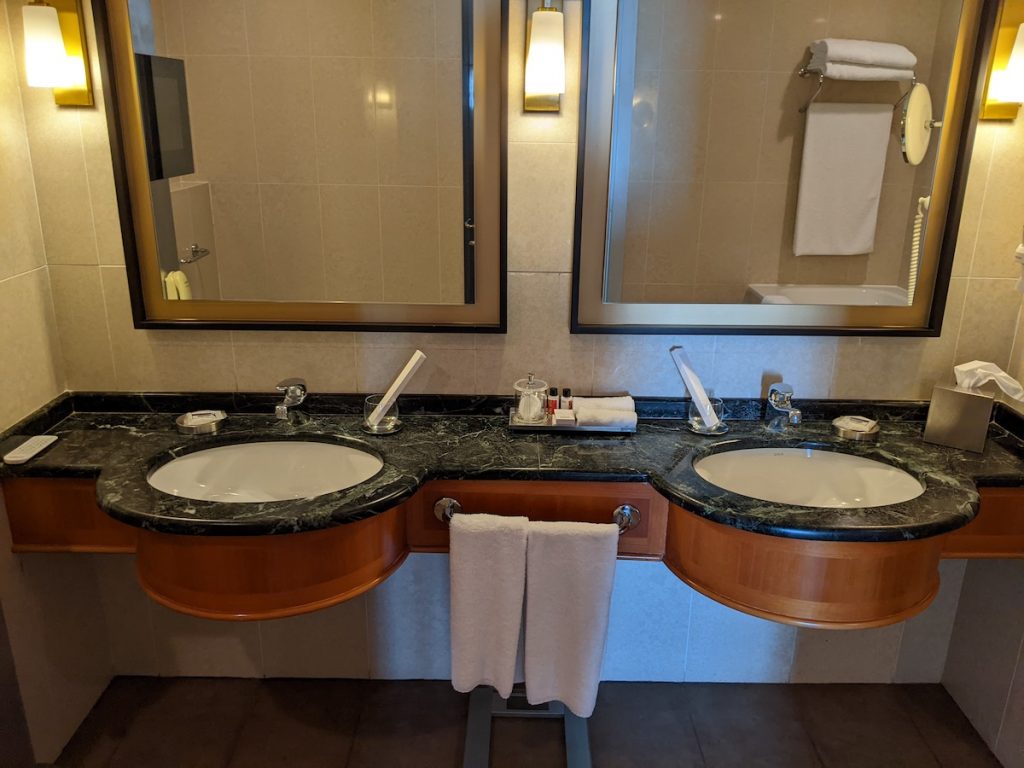 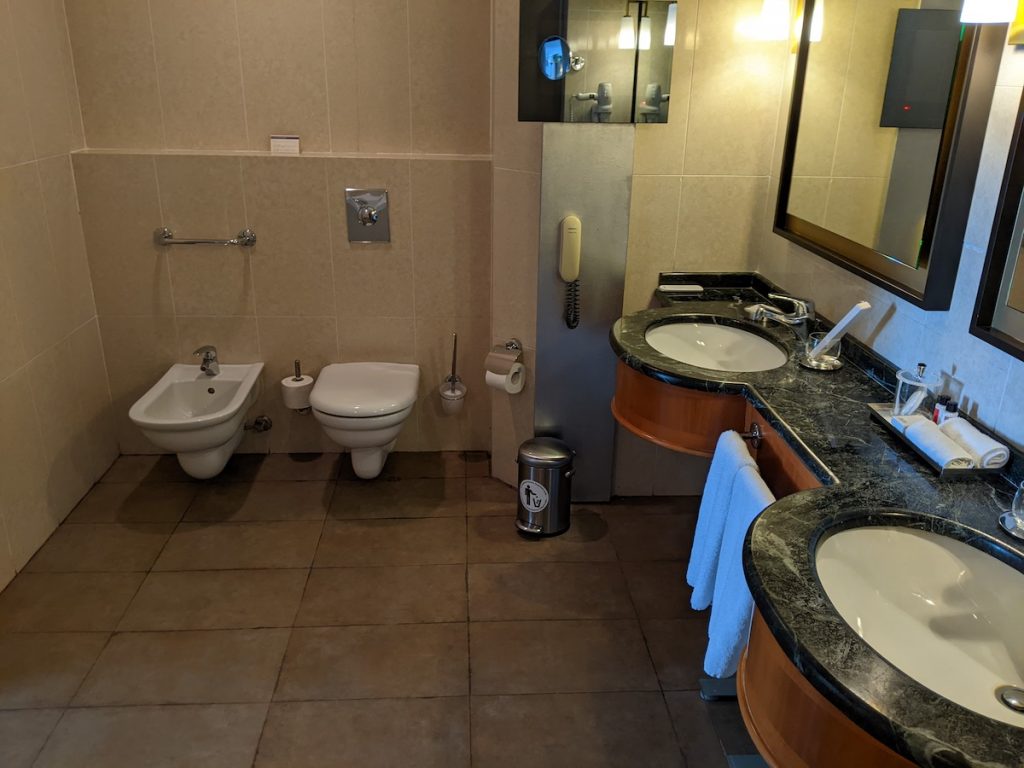 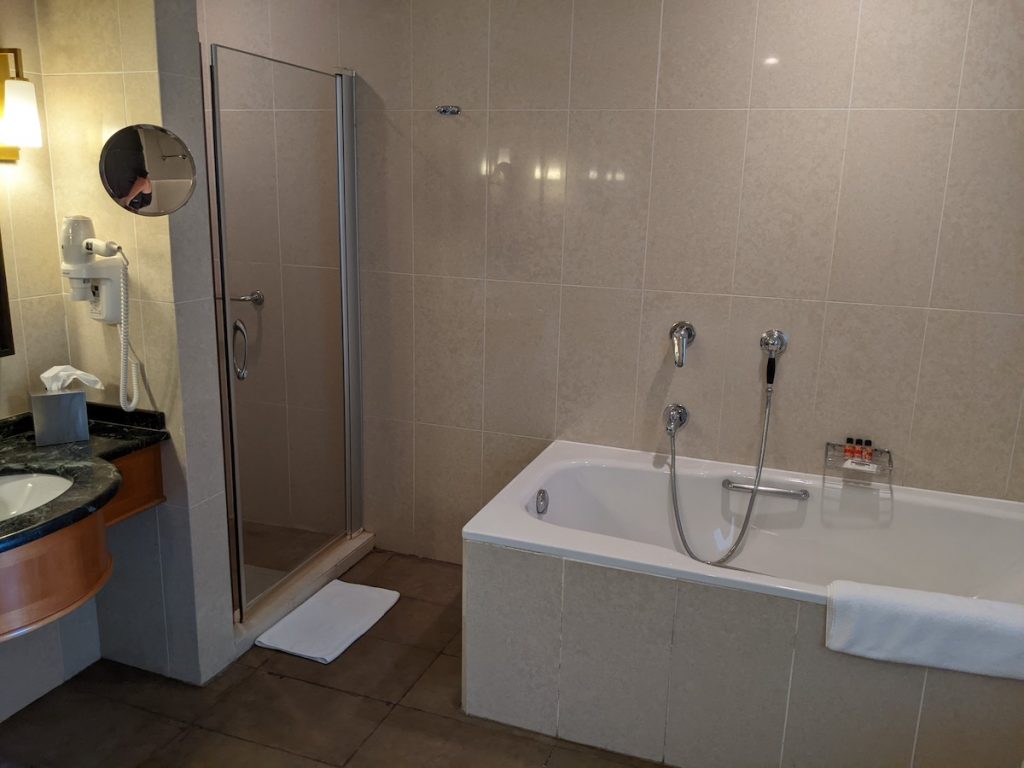 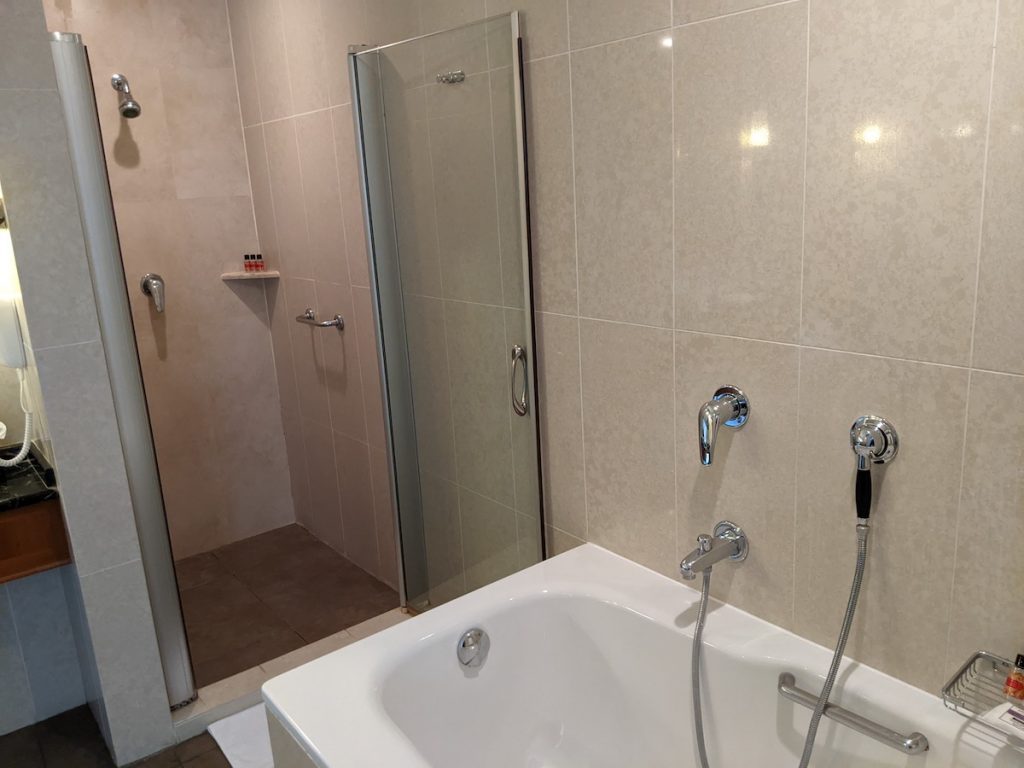 The shower is a single wall mounted shower head.  Overall I found the bathroom to be dark.

The bath products are a mix of the standard Pharmacopia and products labeled as made in Azerbaijan. 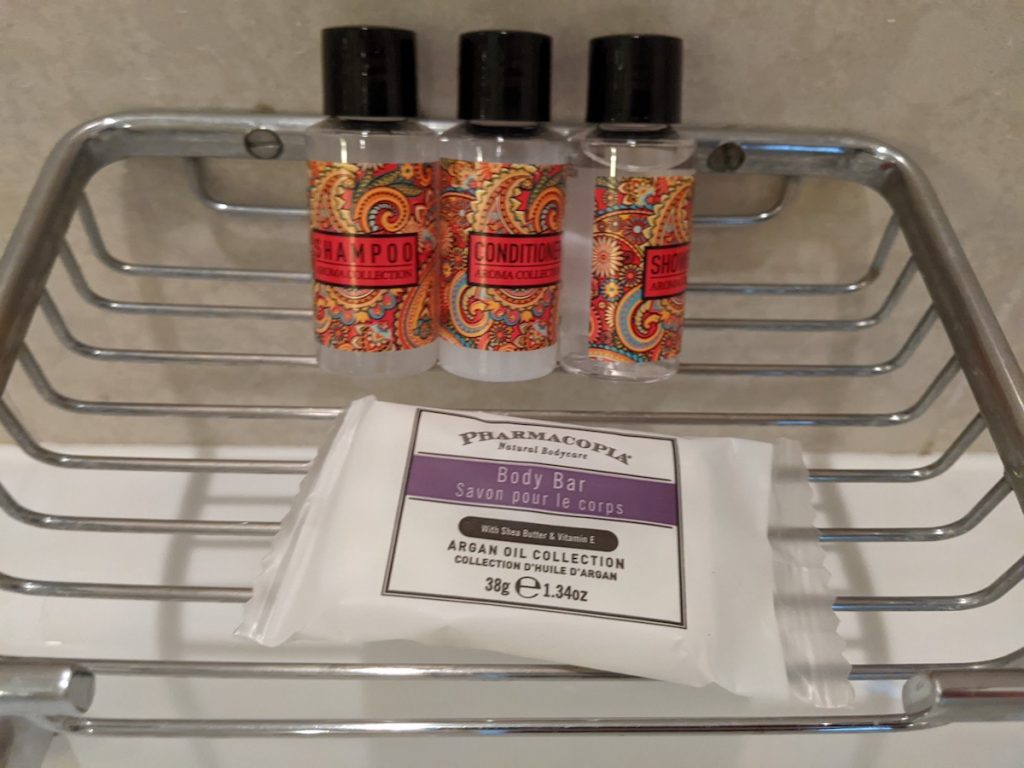 On the same floor as my room (Floor 7) is the Regency Club. 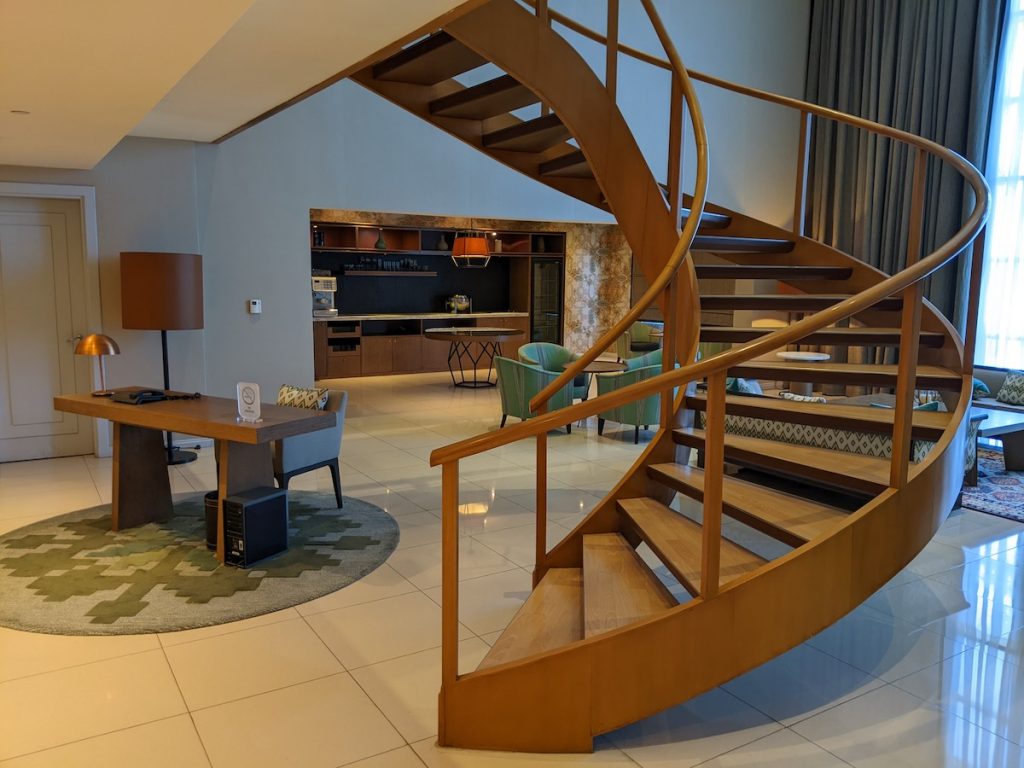 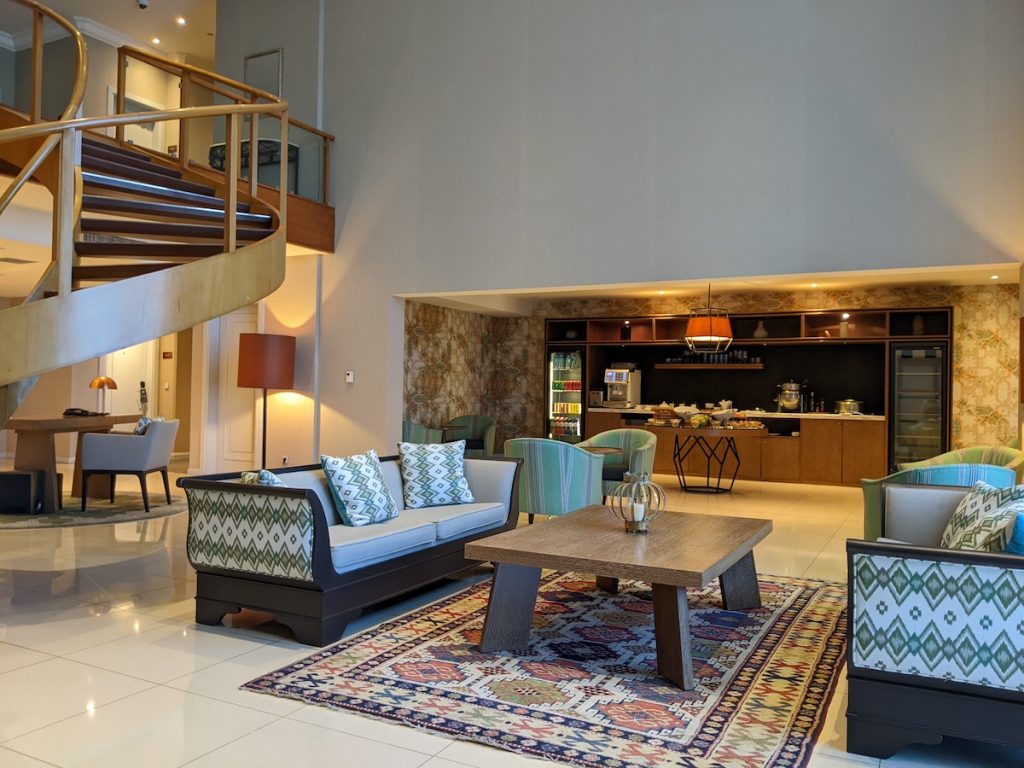 It is only open from 6-8pm for snacks.  During my stay there were two hot dishes and a few cold items in addition to non-alcoholic beverages.  The beverages were locked all other hours so you couldn’t grab a water or soda during the day.

Breakfast for Globalists is served in Mezzo, the restaurant off the lobby.  It is a buffet with made to order egg dishes.  When I arrived around 9am there was a wait for a table.  There were a lot of choices but I won’t say it was the most memorable breakfast. 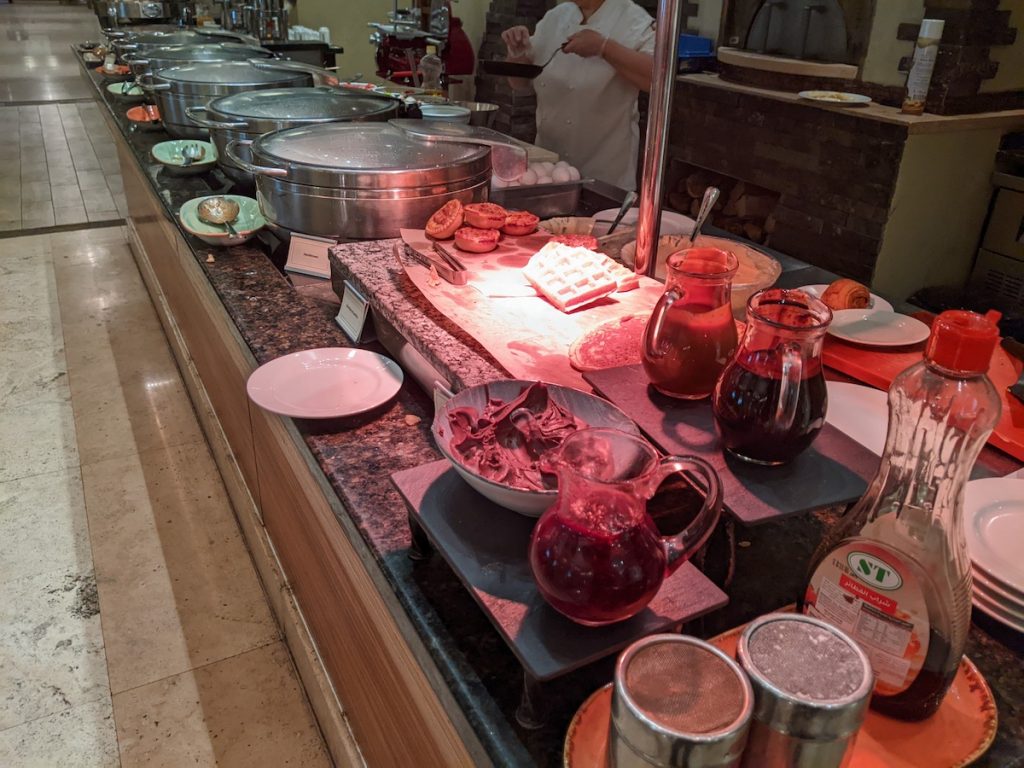 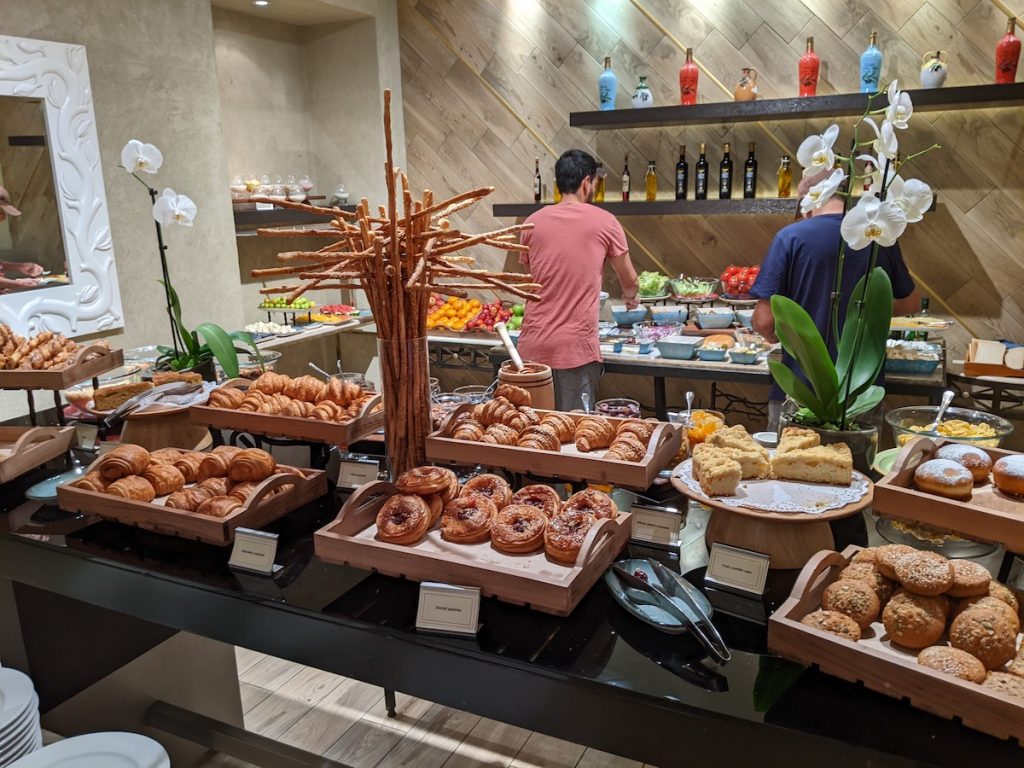 On my second (last) morning, the breakfast manager came by to ask if everything was fine with breakfast.  I said yes.  He told me that I would be receiving an email asking for feedback and that I would need to respond that there were no problems.  I thought this was a bit direct but again, maybe it was more of a cultural or language difference.

Across a courtyard is accessible to the fitness area.  I believe that it is a gym where locals can purchase a membership. 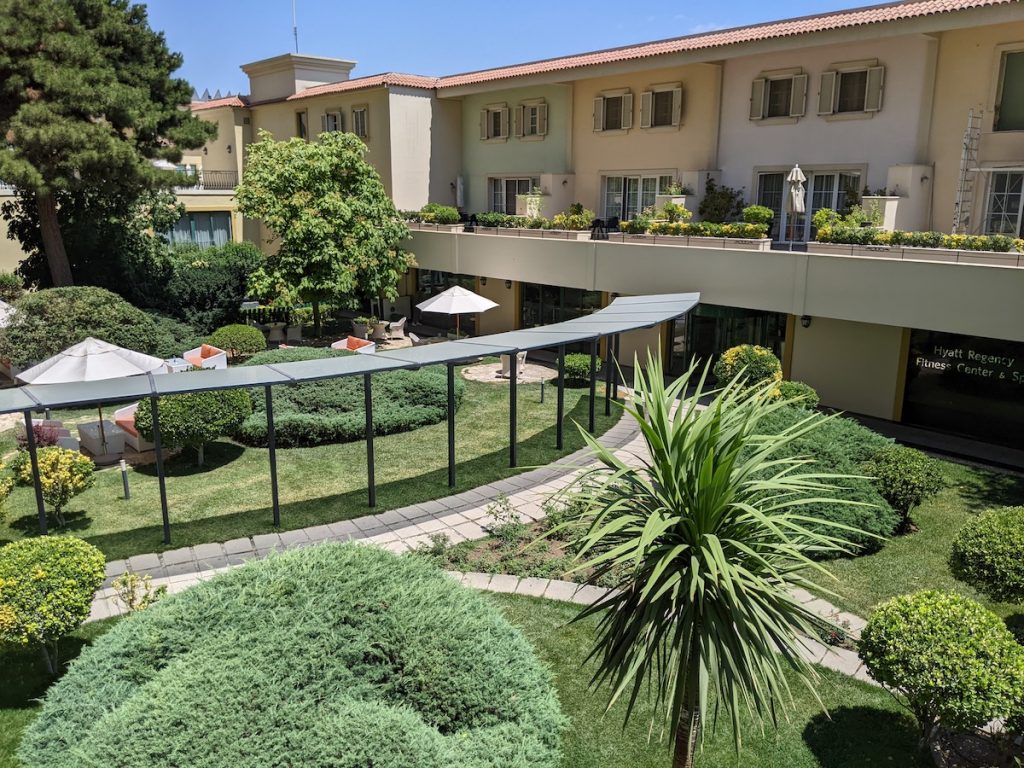 There is an indoor and outdoor pool. 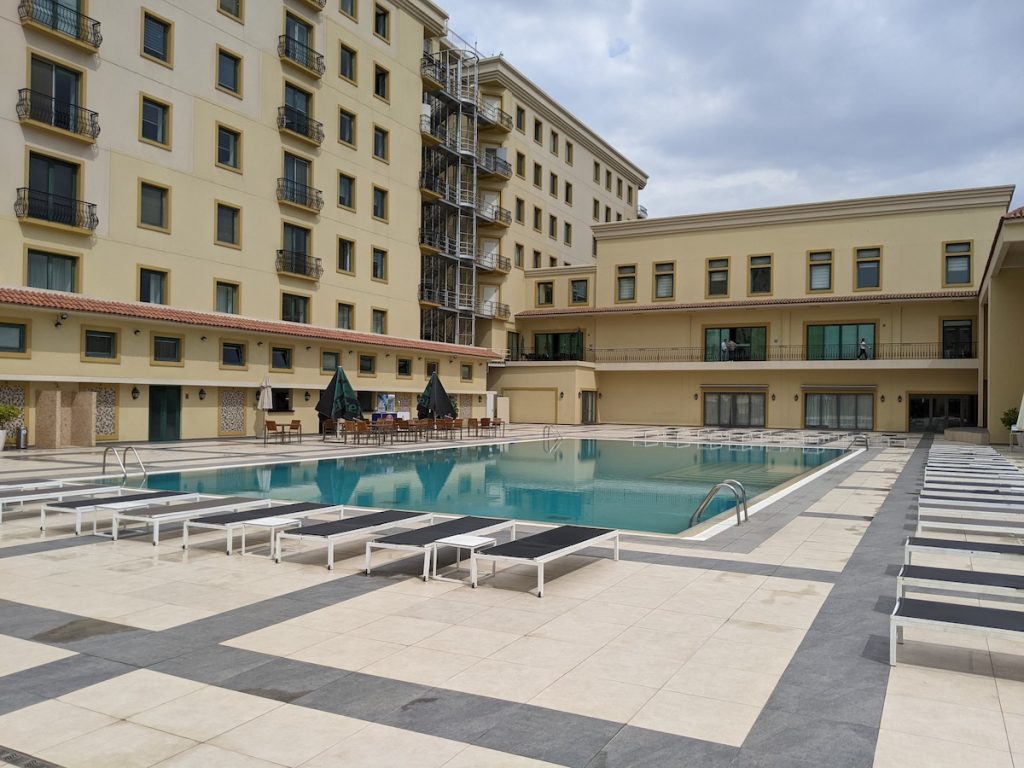 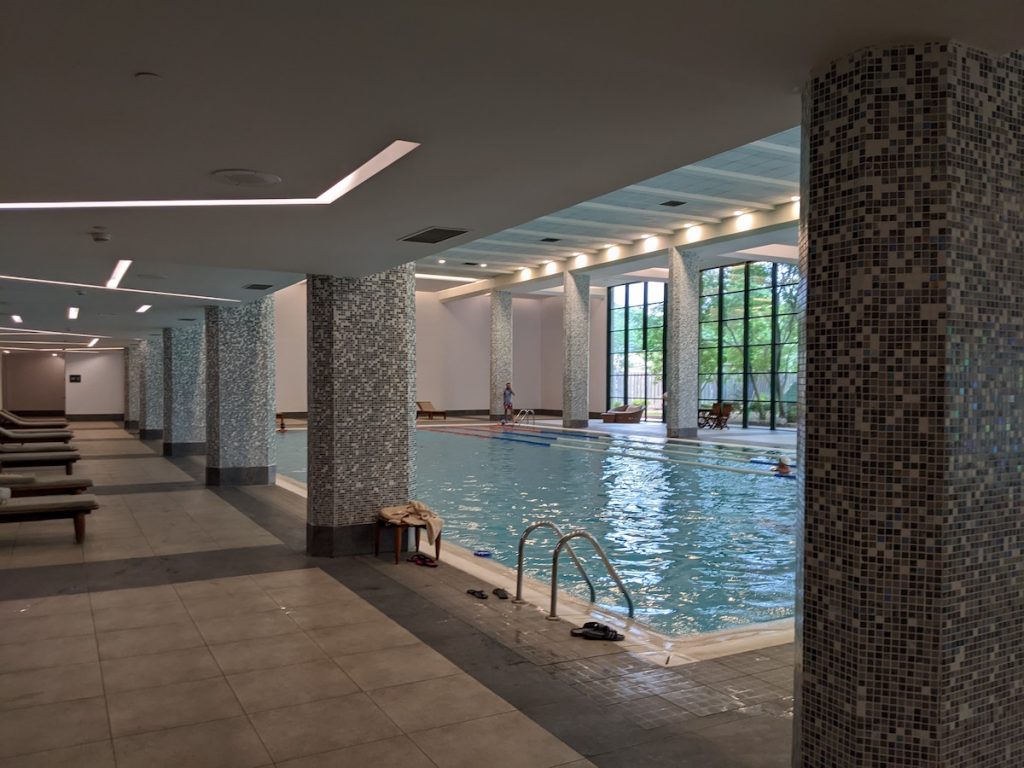 There is a large gym area as well as a spa. 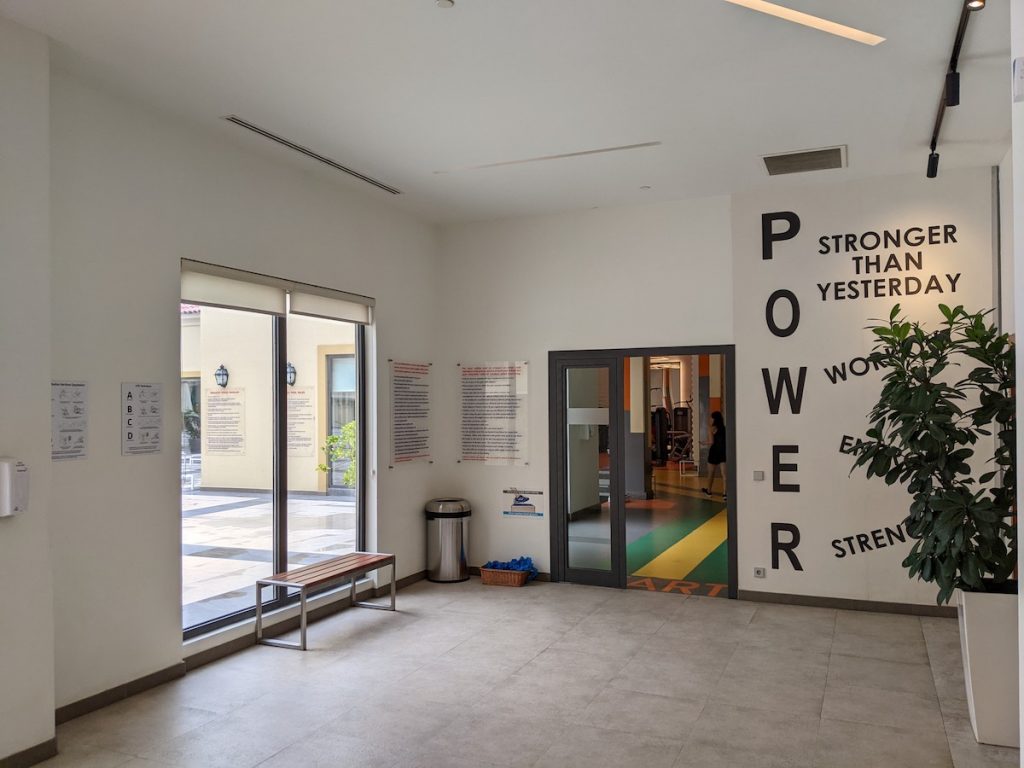 The Hyatt Regency Baku is in a strange location for tourists but with cheap transportation options it isn’t a deal breaker.  It was nice to have a full breakfast buffet in the restaurant, but the Regency Club was disappointing.  The service was mixed; housekeeping did a great job while my interactions with staff was cold which may be a cultural difference.

If I returned to Baku, I would probably pick a hotel in the city center like the new InterContinental.  But at a Category 1, the Hyatt Regency offers a good deal for Hyatt elites. 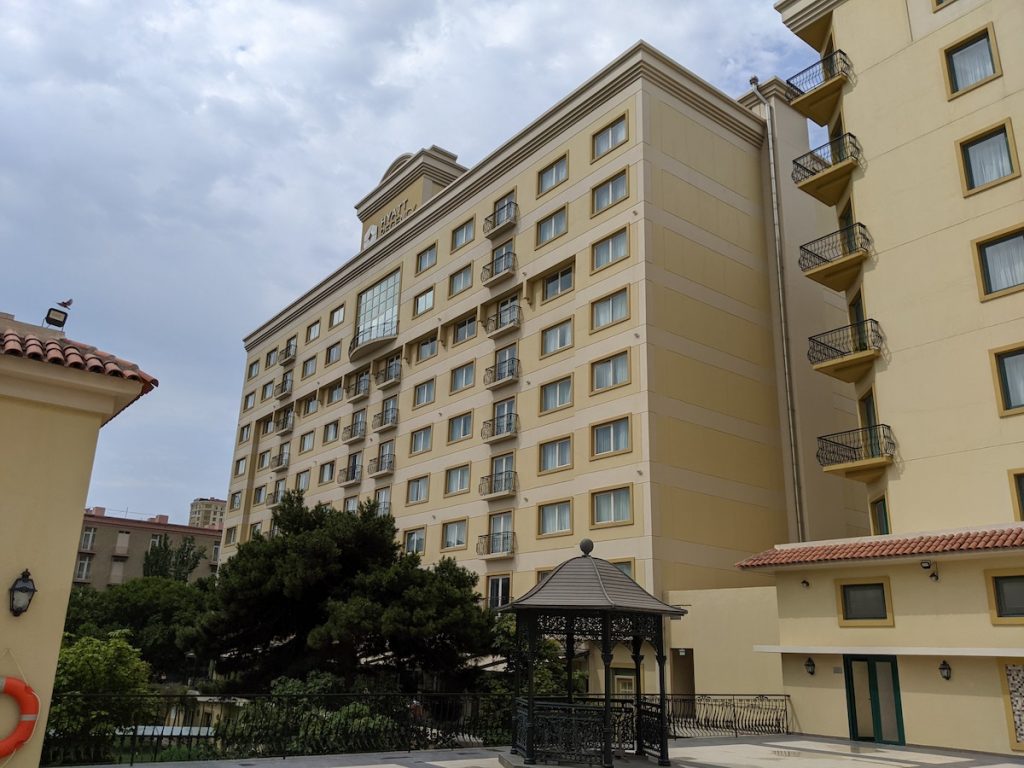 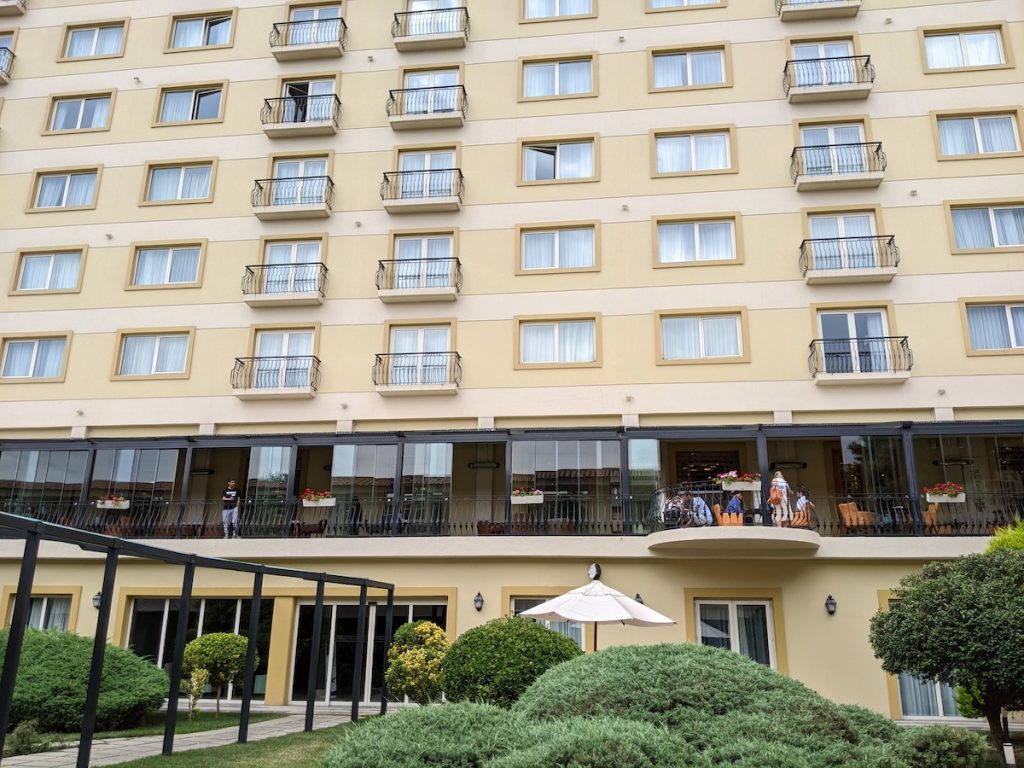