The Seattle metro area has 3.5 million people and up until recently, only one commercial airport.  Paine Field (PAE), also known as Snohomish County Airport, has been primarily used by Boeing.  Their huge Everett factory sits adjacent to the airport.  Plans for passenger service began to materialize two years ago when Alaska Airlines announced they would be offering flights in and out of the new passenger terminal.

Paine Field opened for commercial flights in their new terminal in March, 2019 after delays due to construction and the federal government shutdown.  Currently only Alaska and United operate flights out of the terminal.

The terminal is located about 25 miles north of downtown Seattle.  That can take 30 minutes (on a good day) or multiple hours depending on traffic.  Public transportation between downtown Seattle and Paine Field is terrible so you will either want to have someone drop you off or leave a car (which is expensive). However if you live north of Seattle, flying in and out of Paine Field is a no brainer.

Arrival at the terminal has the feel of a more rural airport.  It reminded me of flights I have taken in to Redding, CA.  There is no parking garage, just a surface lot.  Valet parking is offered.  I took an Uber to the airport and there is a ride share drop off to the side of the terminal.

The building is modern with a luxury feel.  And it feels very small. 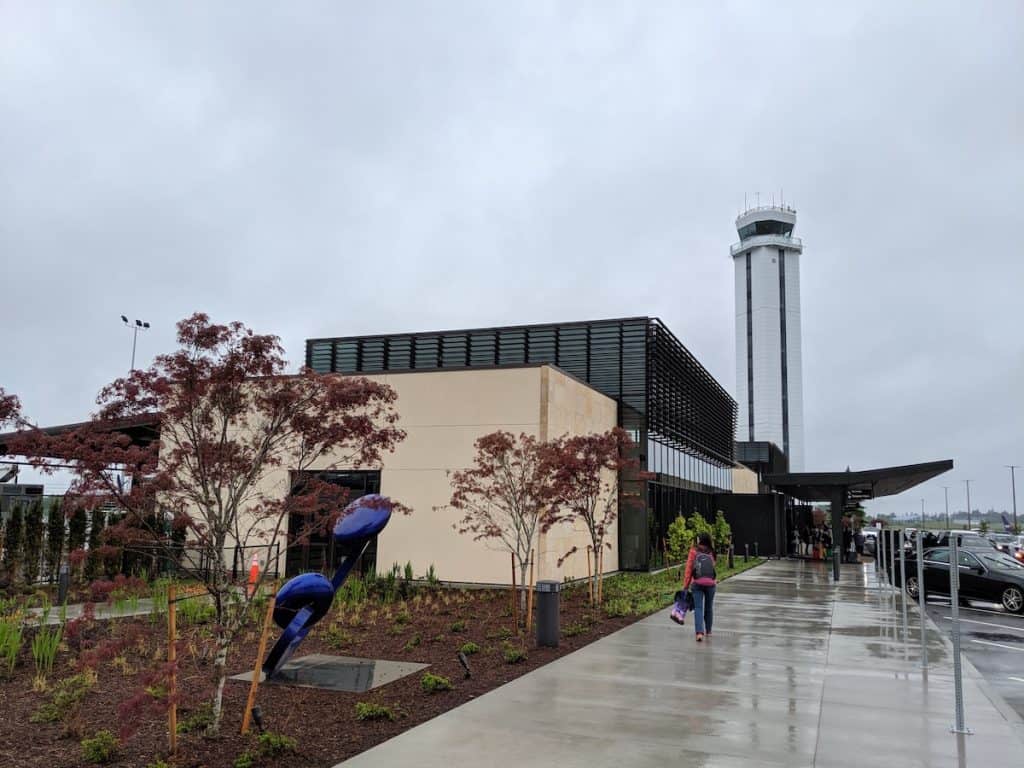 The check in area has just three desks and a number of self-check in kiosks.  A large display shows the upcoming departures. 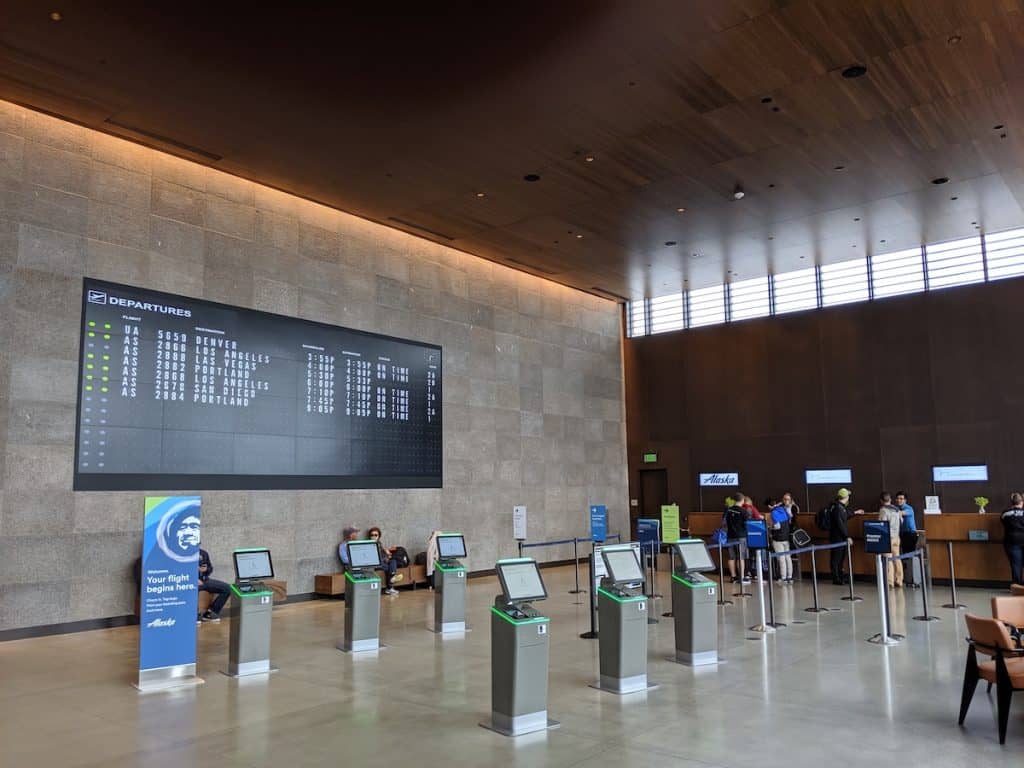 Down a hall (past what will soon open as a coffee shop) is the baggage claim area with one lone belt. 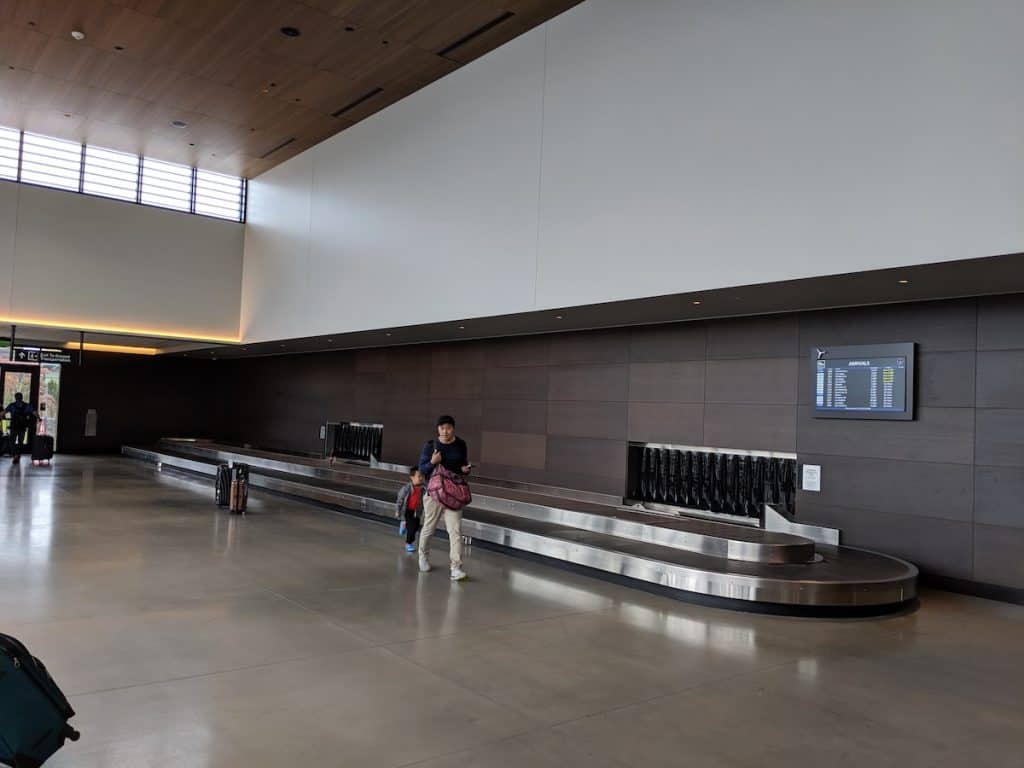 Security takes up a large portion of the middle section of the building.  While there is a line for TSA PreCheck, it is PreCheck “lite”.  You can keep your shoes on but liquids and computers come out. 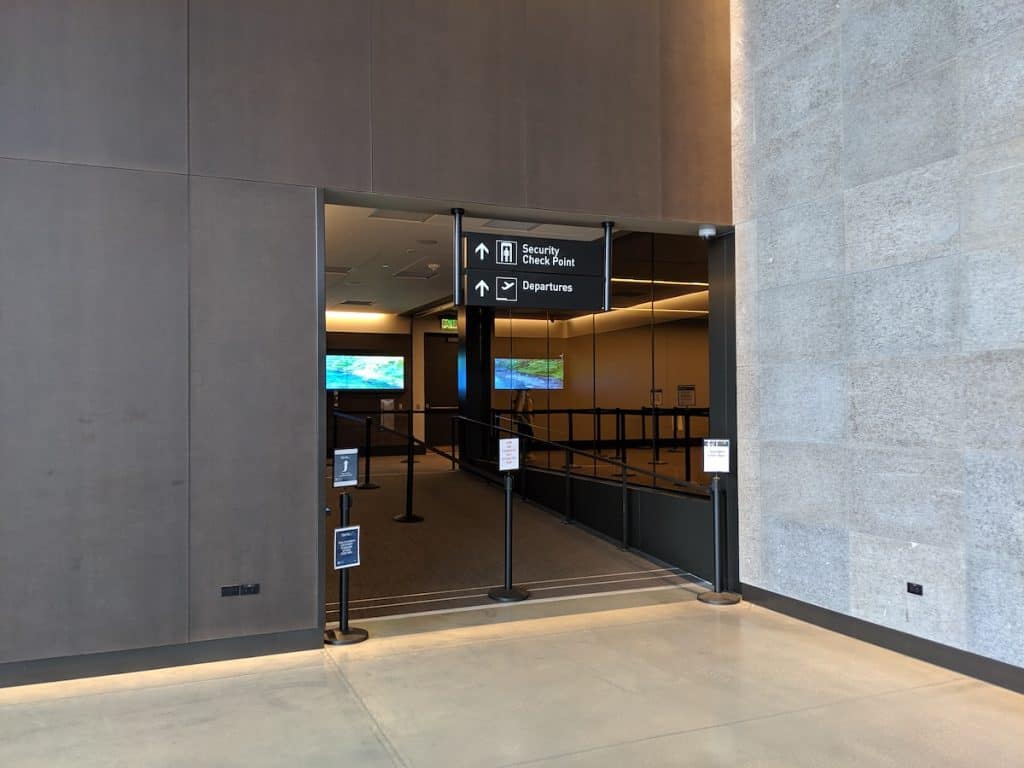 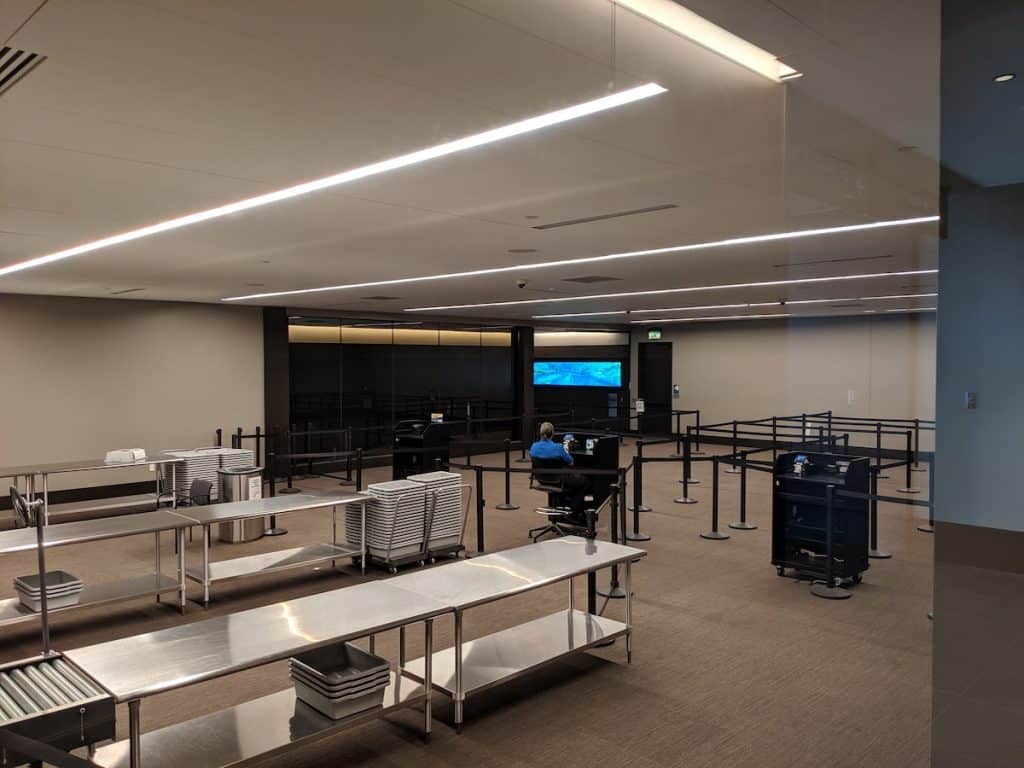 Once through security, you enter what feels like an exclusive airport lounge.  Really it is the departures lounge accessible to all passengers.  Currently the only option for food is a bar along the back wall, but a Beecher’s restaurant is set to open soon across from Gate 1. 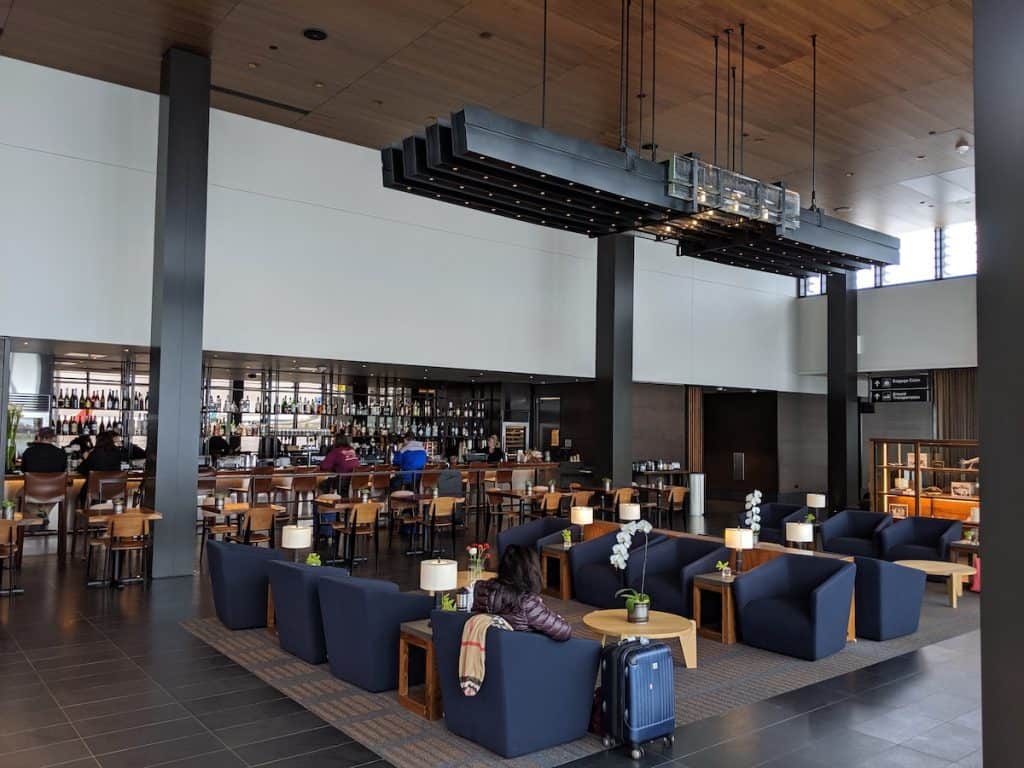 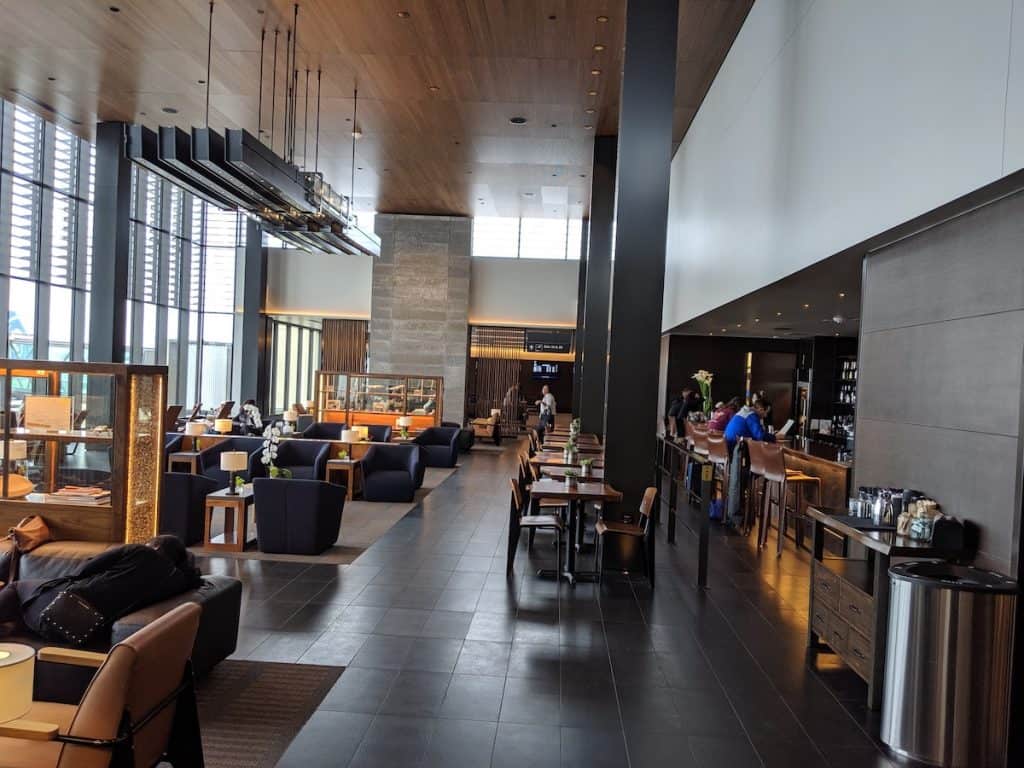 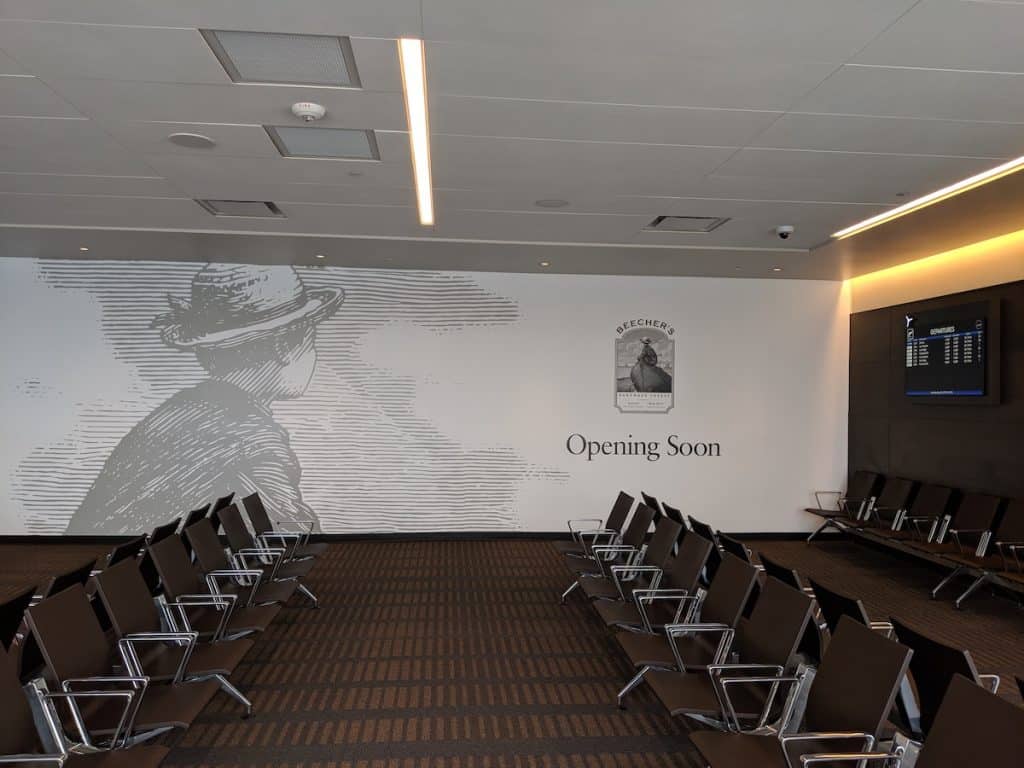 Update: Beecher’s and a coffee shop are now open.

There is a wide variety of seating options (lots of leather) between two fireplaces that book end the departure lounge.  Fresh flowers and vintage airline memorabilia decorate the lounge. 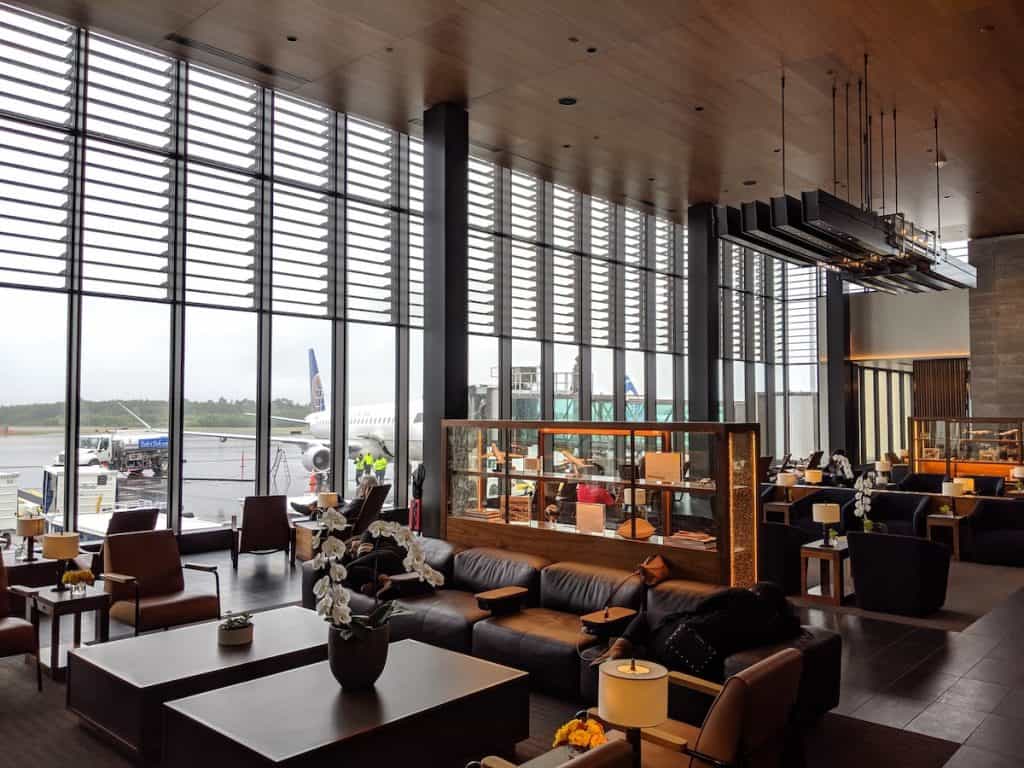 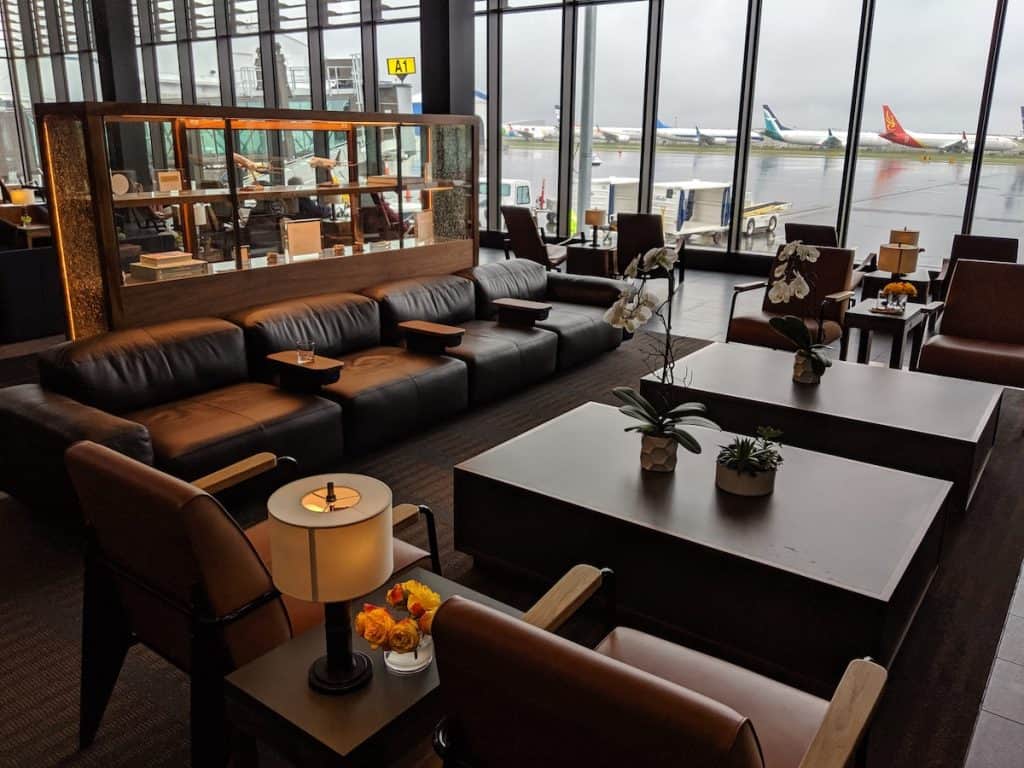 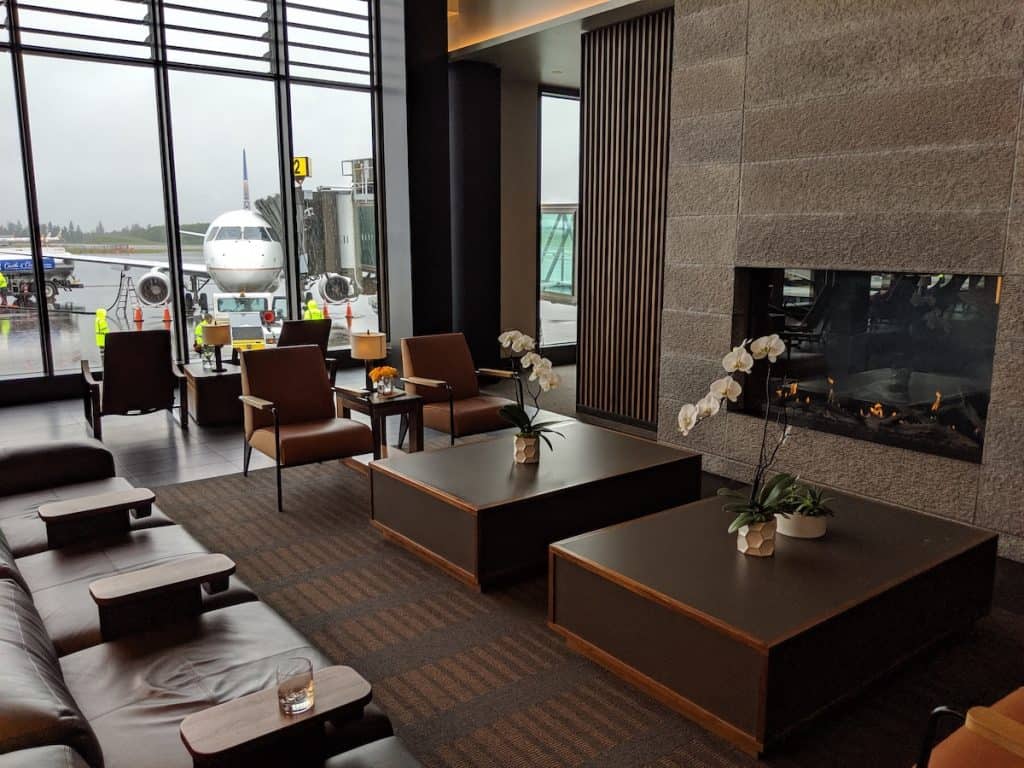 There is power at every seat, including traditional USB and next generation USB-C power outlets. 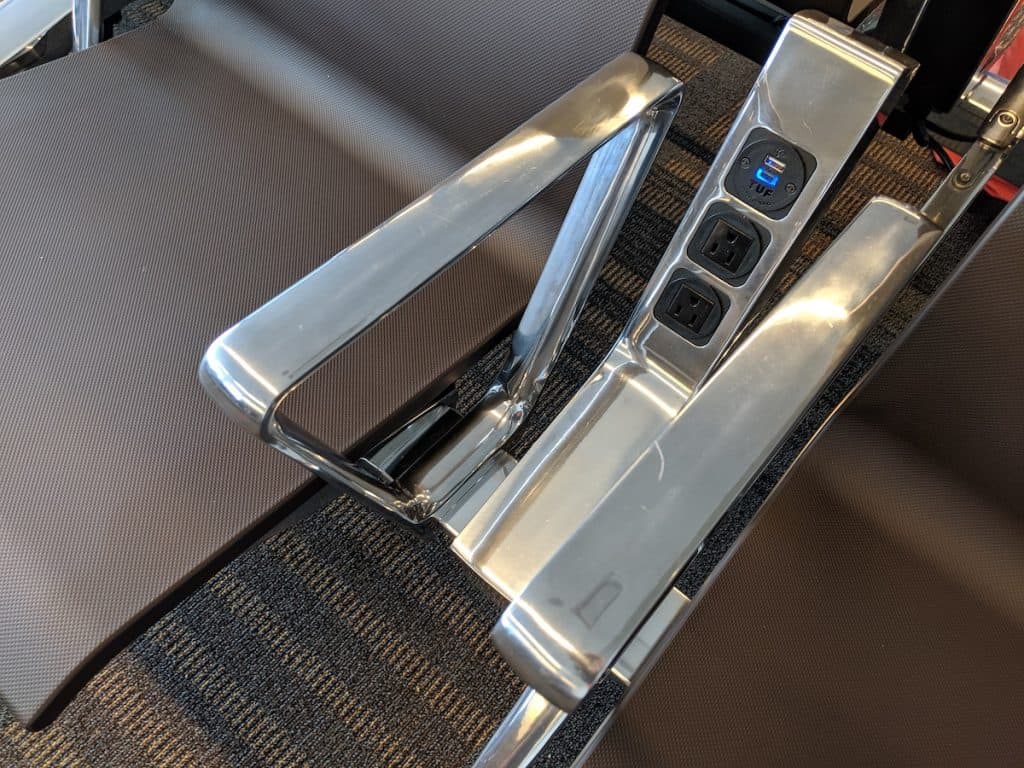 There are two (really 2.5) gates.  Gate 1 is at one end of the departure hall and Gate 2 A & B are at the other end.  There are only two jet bridges, so if you are leaving from Gate 2B you will have to walk outside to your plane.  More traditional airport seating is available near the gates. 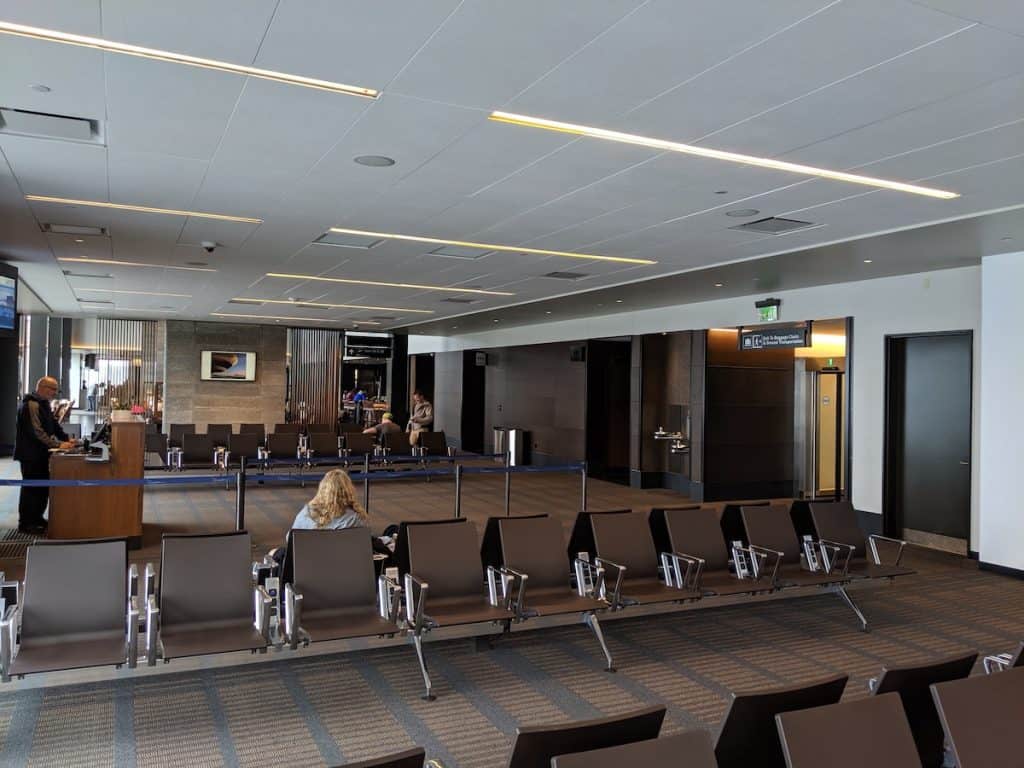 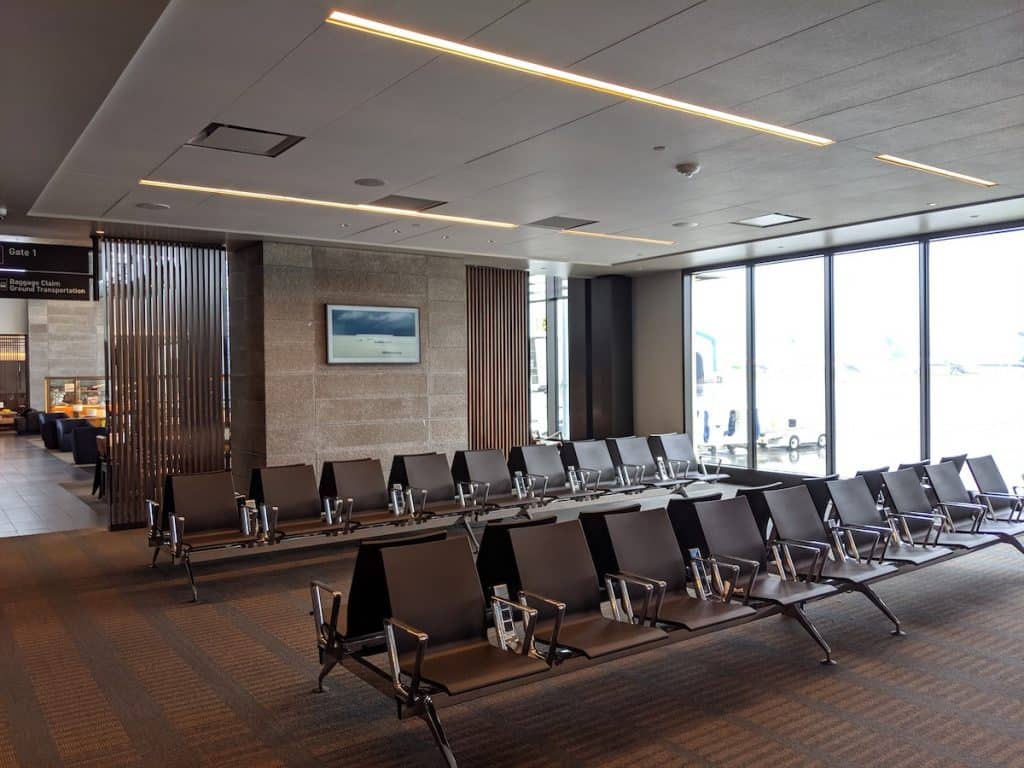 The bathrooms are all gender, individual rooms.  Some are labeled as family restrooms and are a bit larger than the others. 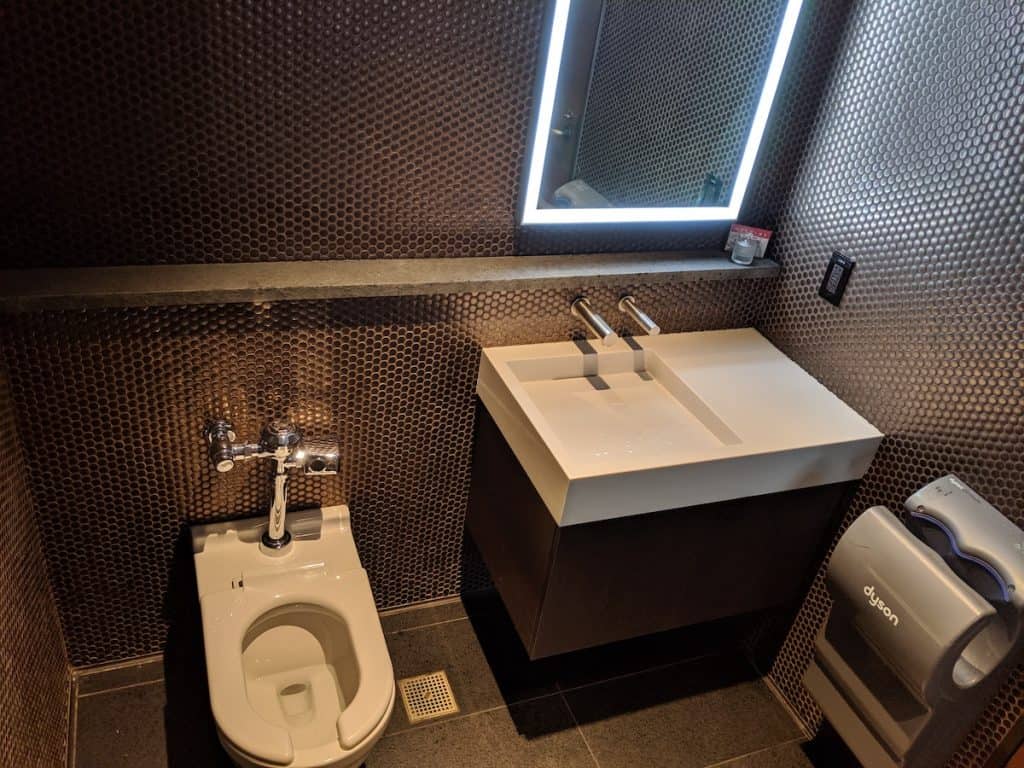 Overall Paine Field is an easy and comfortable new option for flying in and out of the north Seattle area to destinations in the Western United States. 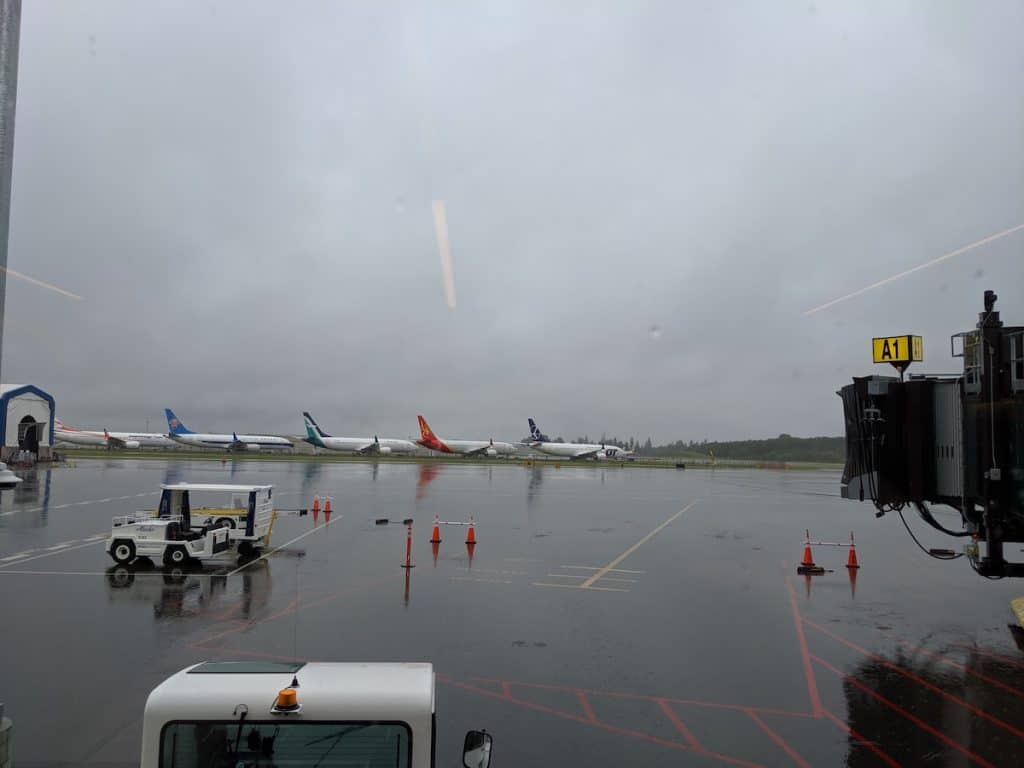