The drive up into the mountains is beautiful, just make sure your car is gassed up as there are no service stations. 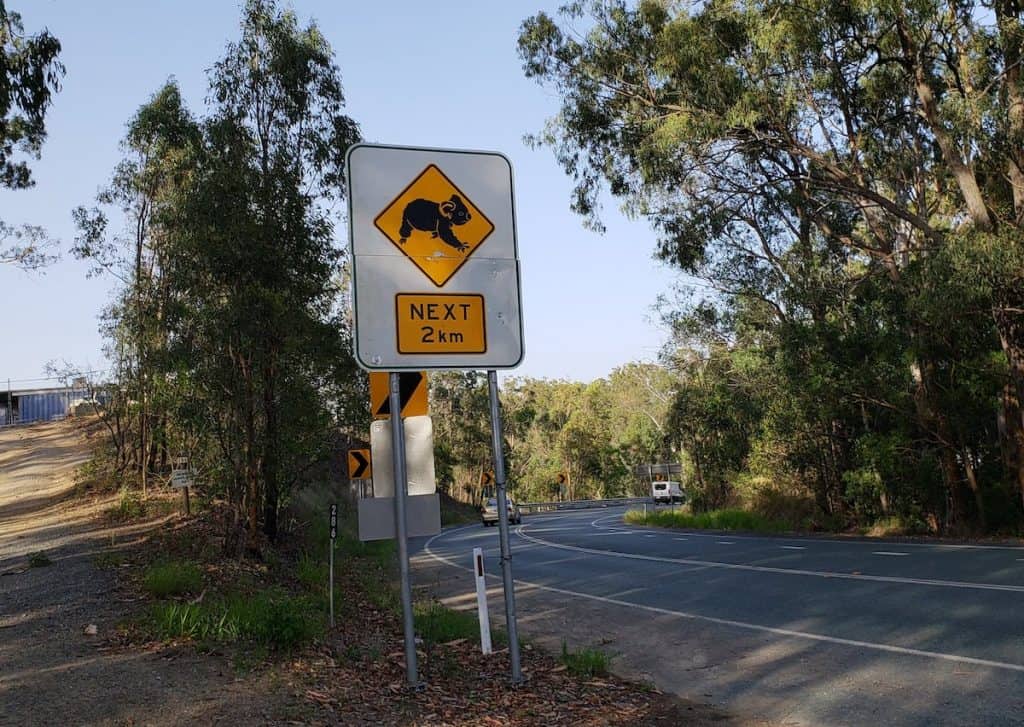 I arrived at the park about 45 minutes before sunset; which was perfect timing as I will explain.

There are two reasons to visit Natural Bridge.

First, is the 1km hiking loop through the forest to the Natural Bridge.  There is a parking lot with restrooms and running water.  There are also a few picnic areas.  You will want to do this portion of your visit in the day light or just at dusk.  It is best to start the loop with the trail to the right (not down the stairs). 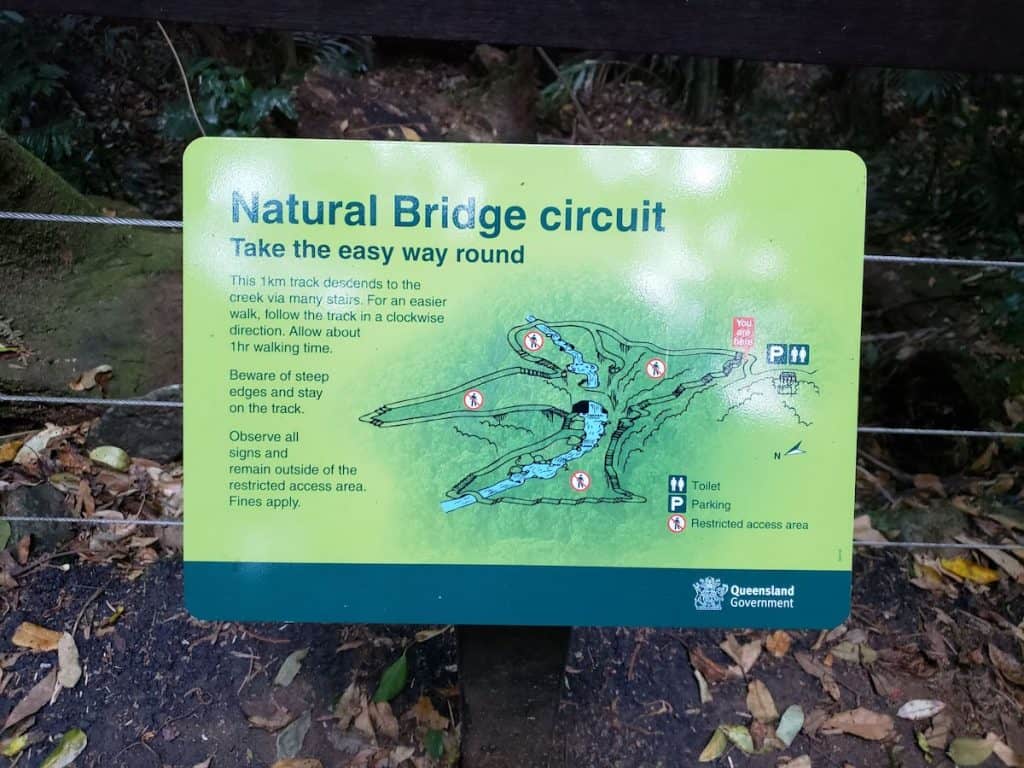 As I started the trail, a red-necked pademelon, a small, kangaroo like creature, crossed the path.  Sorry for the terrible quality, I wasn’t prepared to meet the fast moving critter. 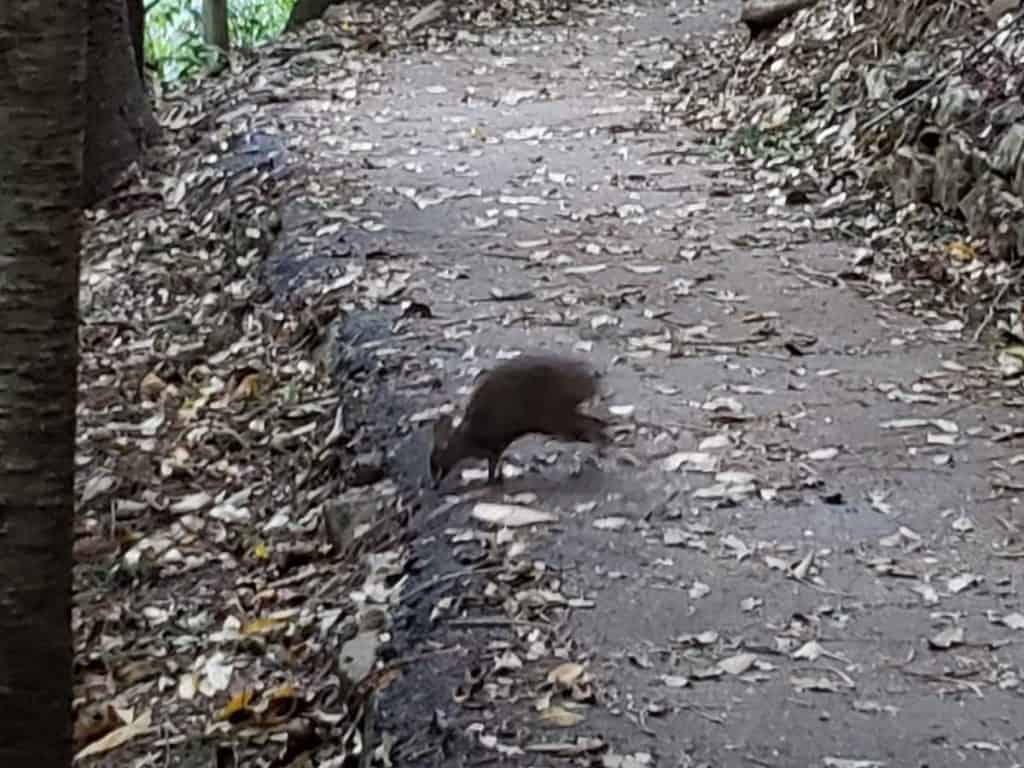 The path itself is paved the entire way.  There are a lot of stairs, so although it is not rugged, it might not be for everyone. 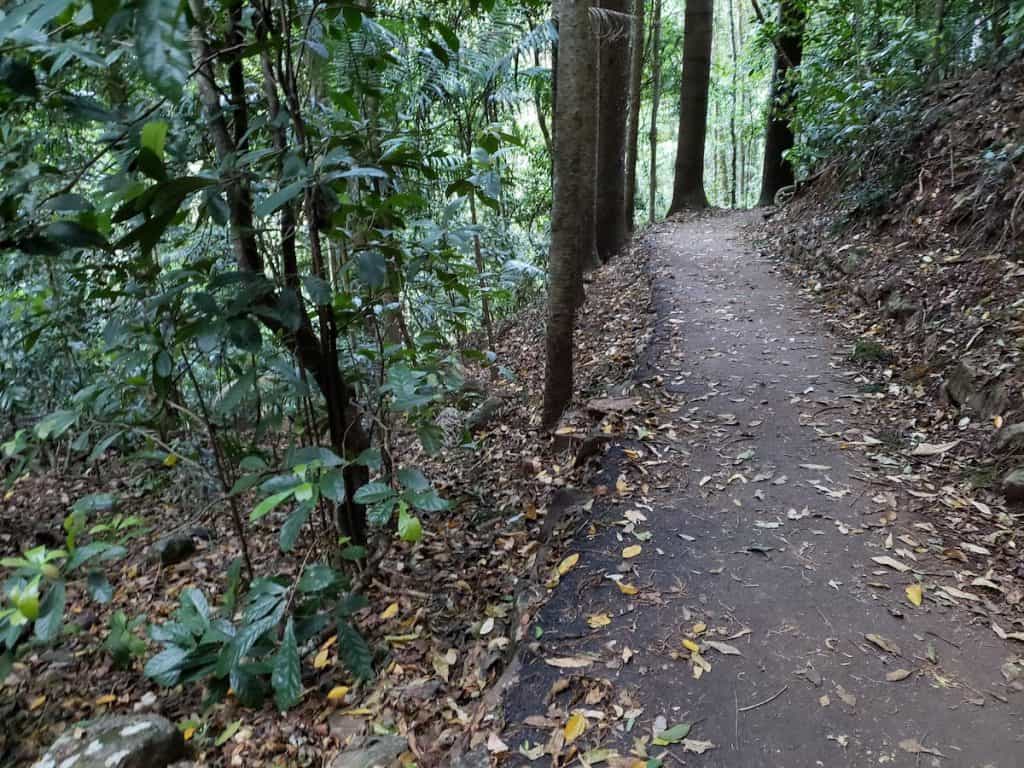 The loop crosses the creek twice. 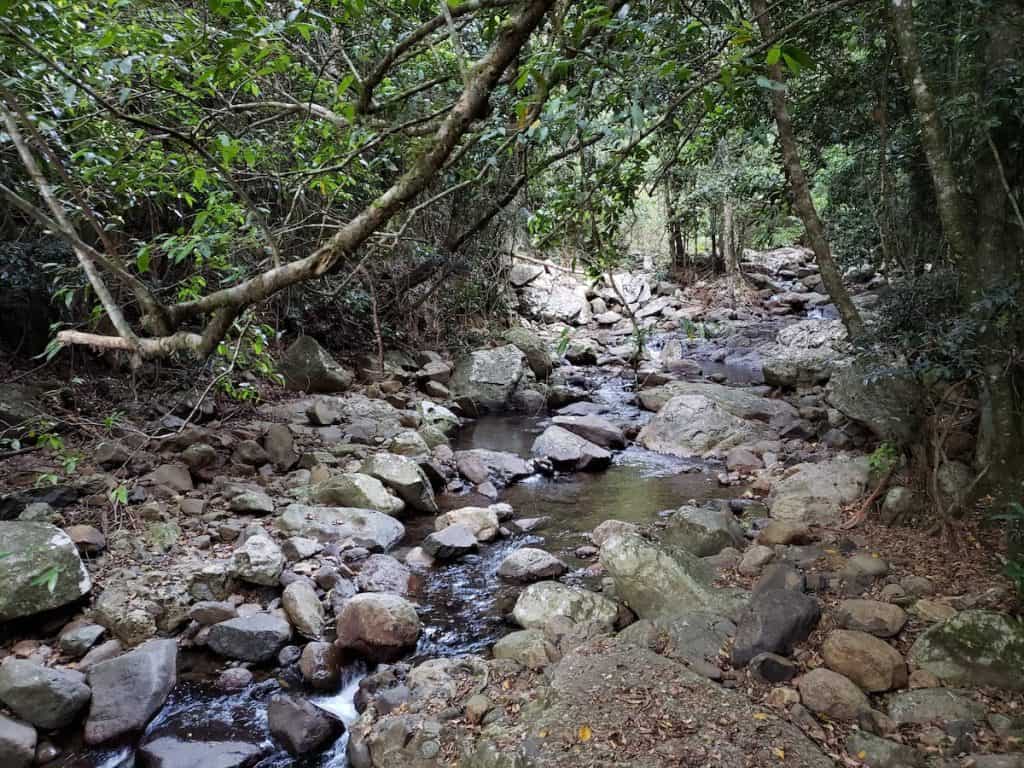 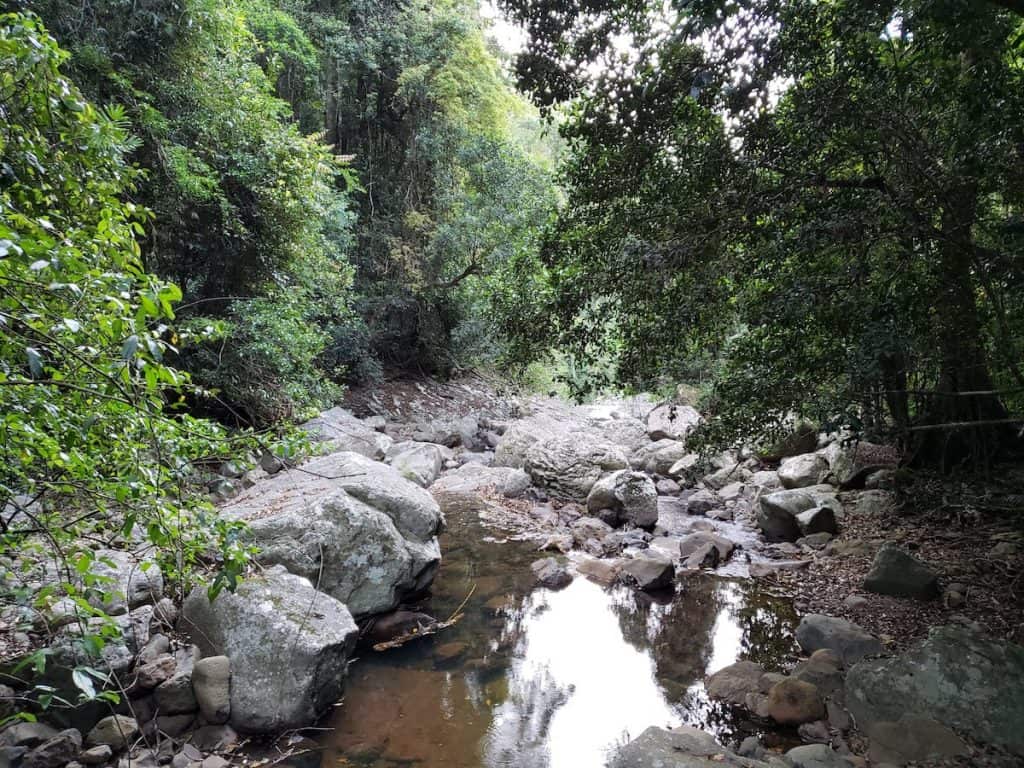 Swimming is not allowed as it disturbs the wildlife including a rare species of eel that live in the creek.  Signs inform visitors of potential wildlife you will encounter.

The main attraction is the waterfall that has cut a hole in a rock formation, creating the natural bridge. 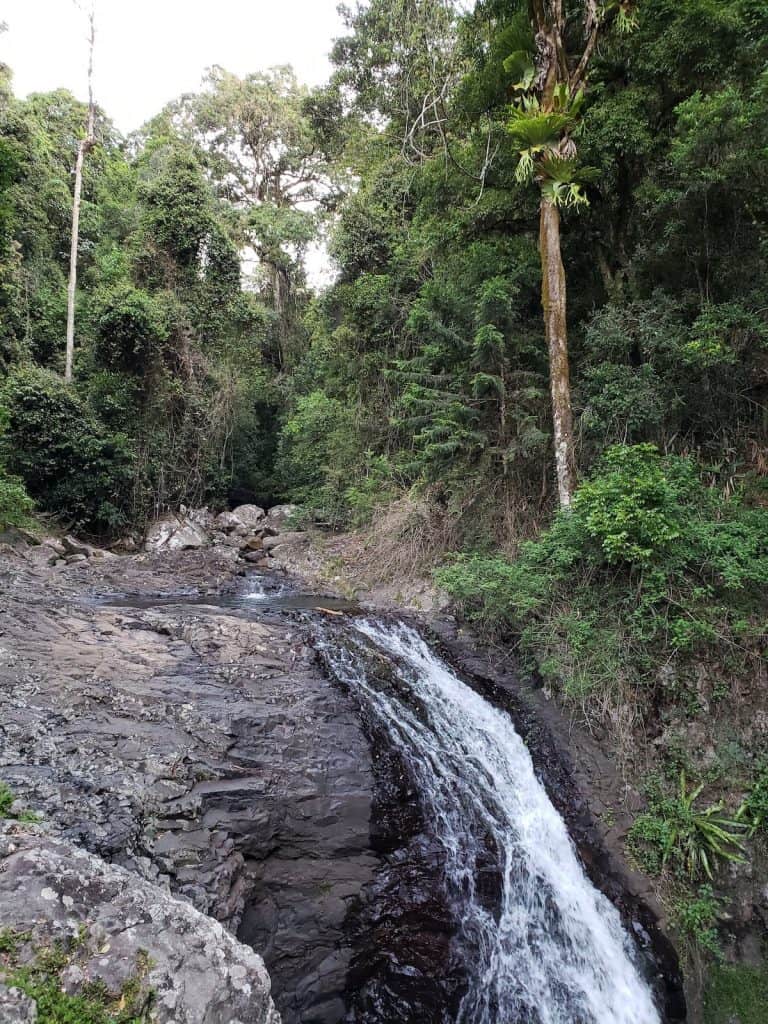 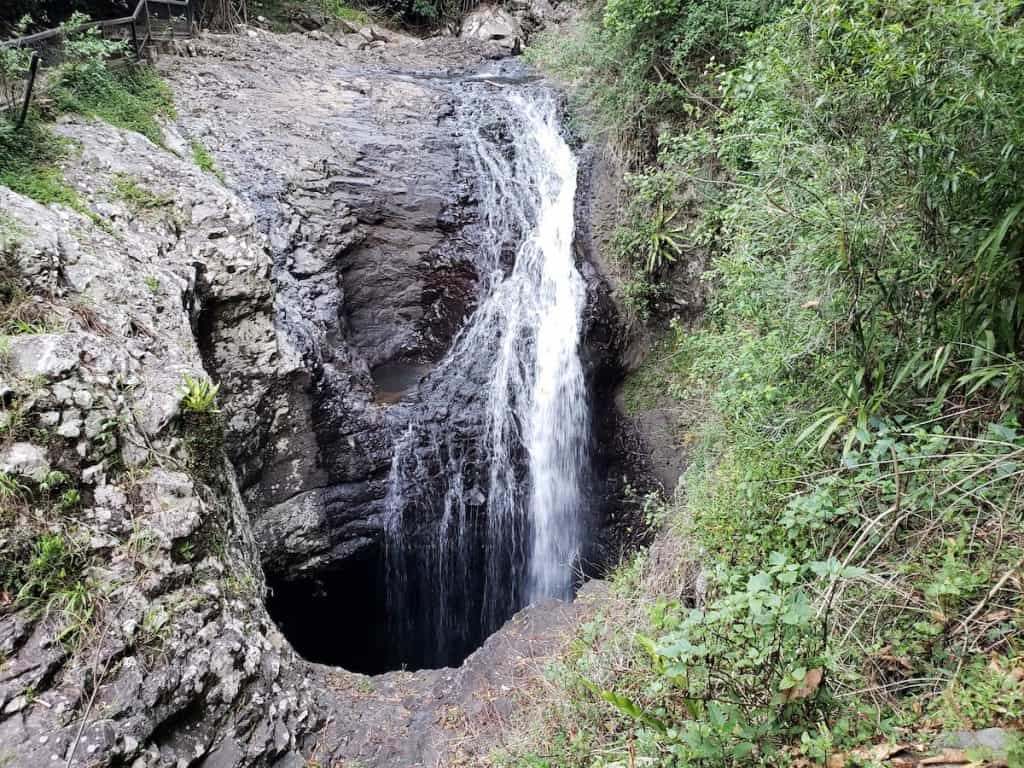 Towards the middle of the loop, before you cross the creek the second time, you get to see the natural bridge and waterfall from the underside. 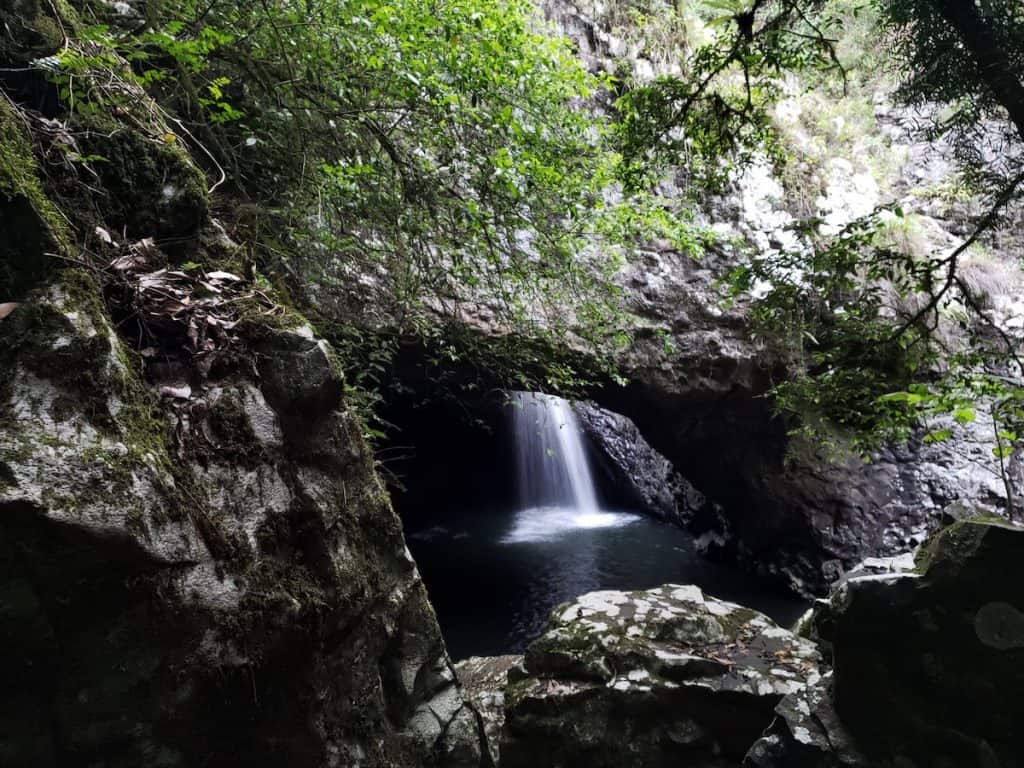 While the hike is best done during daylight, the even more spectacular show comes out at night.  You’ll want to stay at the lower part of the falls until dark or else come back after resting back at your car.

Back under the natural bridge is a cave.  Besides many bats, you will get to see the light show of hundreds of glow worms.

The glow worms, actually fungus gnat larva, from the Arachnocampa genus, use their bioluminescence to attract and catch prey.  They drop down on strings from the cave ceiling and glow a bright blue color.  The cave ceiling almost looks like the night sky.  I also spotted a firefly in the cave.

The frustrating thing is that there were a number of tour groups during my visit that did not respect the rule of no lights in the cave.  Not only does it hurt the bats and glow worms, it makes it hard for your eyes to adjust to the darkness.  Tons of visitors tried to take photos of the glow worms — it doesn’t work and your phone screen gives off a ton of lot.

The magic of glow worms extends out into the trail walk if you take the time to look.  There is bioluminescent fungi in the dirt along the path.  It feels otherworldly, like visiting Pandora.

Despite the inconsiderate tour groups, visiting the Natural Bridge was one of the highlights of my time in Australia.  The glow worms are most spectacular in the warm, moist months of November-January.  Do some research to find out when sunset is so that you can visit to see both the light of the forest and the darkness of the glow worms.  Bring a jacket and small flashlight for the hike, just make sure you turn it off before you start down the stairs into the cave.

Have you visited the Natural Bridge?  Any tips for fellow readers?